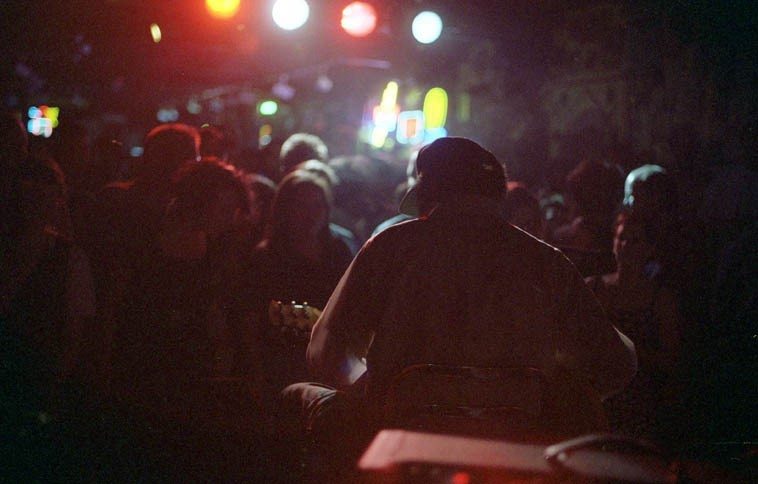 R.L. Burnside bringing a bucket of that deep Mississippi Delta mud to the Dingo Bar, Albuquerque — May 15, 1998 — photo by Mark Weber

The music will have gone through several Eras by then, in 2342. We are now living at the end of the First Era. There will also be a 2nd Era and a 3rd Era before we reach 2342. Music is always necessary to human life. It is more ancient than speech. The birds taught us how to communicate with song. Those first singers are lost to history, but not to our shadow memory. The names of Ellington, Armstrong, Charlie Parker, Billie Holiday, Lester Young, Lennie Tristano, Ella Fitzgerald, are mythological from the First Era. They are mere luminaries in the chronicles, from a glorious time, remember’d only on valedictory occasions, thought about no more than anyone now thinks about Pericles, or Ramses II, or the Venerable Bede. By 2342 there has been a lot of legends in the interim. For awhile in the 2nd Era the musicians were having chips put into their brains so that they could improvise freely and that’s why we don’t have many legends from those times, not until the Reconfiguration when Zooky Mehtaba, who had an old 1930’s Balanced Action saxophone prooved jazz had to be organic, it had to be natural, and be what is. Is-ness he called it. “Is you with the Is? Oh yeh . . . .”

In all my past lives it was Zooky who was the greatest of them all, he touched on such deep wellsprings of desire for redemption and reconciliation and things that were once thought lost to memory, like the early bird songs, that sorrow and loss all became part of his music and came to life in his time.

Today on the Thursday jazz show we’ll listen to some of the masters that Zooky learned from. 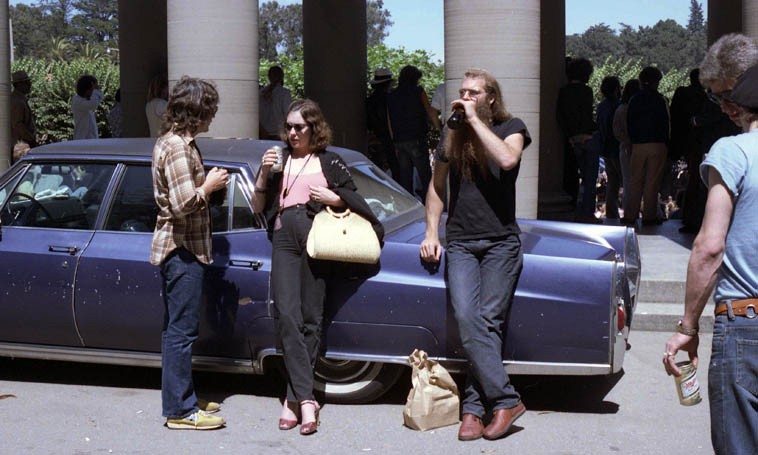 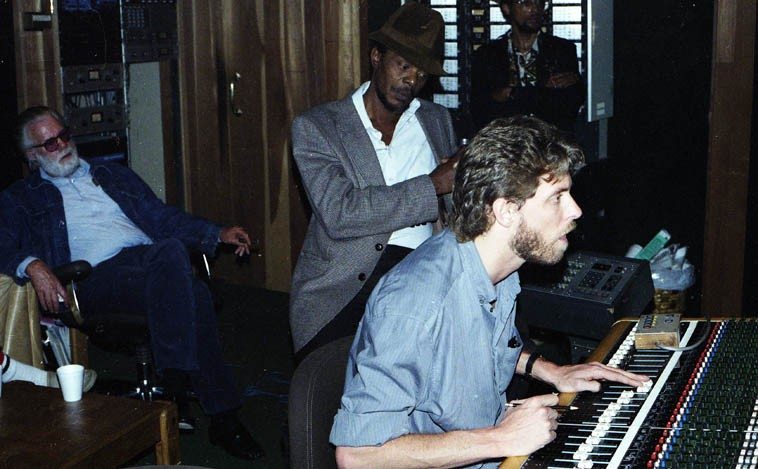 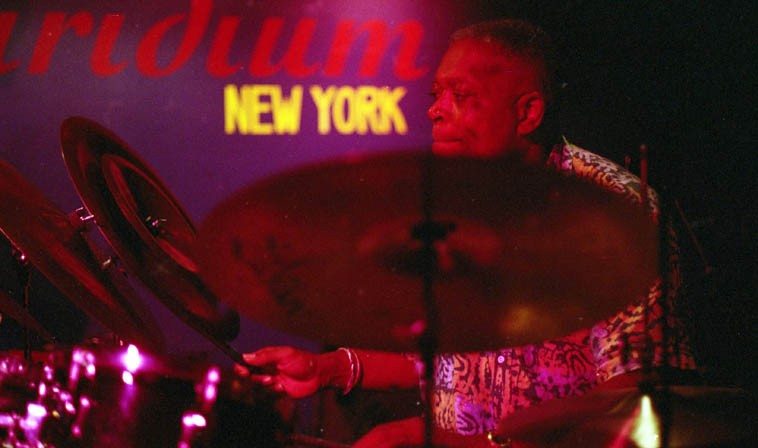 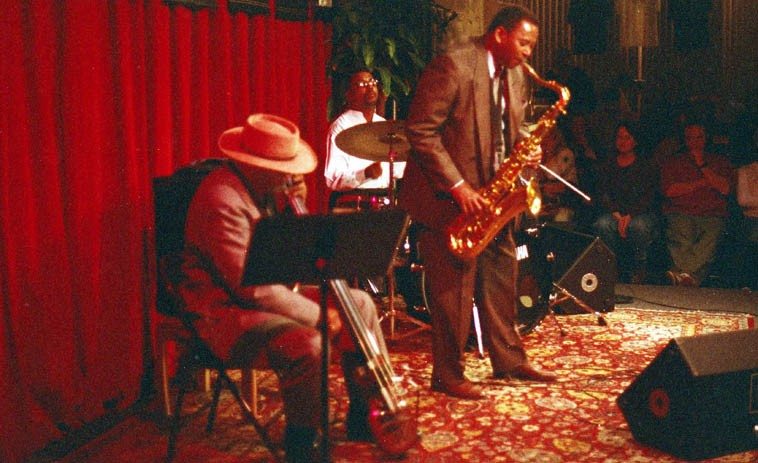 Odean Pope Trio — old Outpost, Albuquerque — October 13, 1997 — Craig McIver, drums; and Tyrone Brown, bass —- Odean has a sound like nobody else, it is molten, like metal that has been stripped of chrome, or those nails that have been electro-plated –galvanized– so they don’t rust, it is deliberate, he doesn’t throw a bunch of notes at the wall to see if any stick, these notes emanate from a thoughtful mind, unvarnished, curdled, ambergris, thick, percolates, it doesn’t erupt or blast or frenzy, it is pure resinous gold overflowing from deep currents, inexorably, surging forth, at times it can become cyclonic, like when he awakens his pranayama cakravat (that’s my Sanskrit approximation for circular breathing), his spinning mandala of sound —- photo by Mark Weber 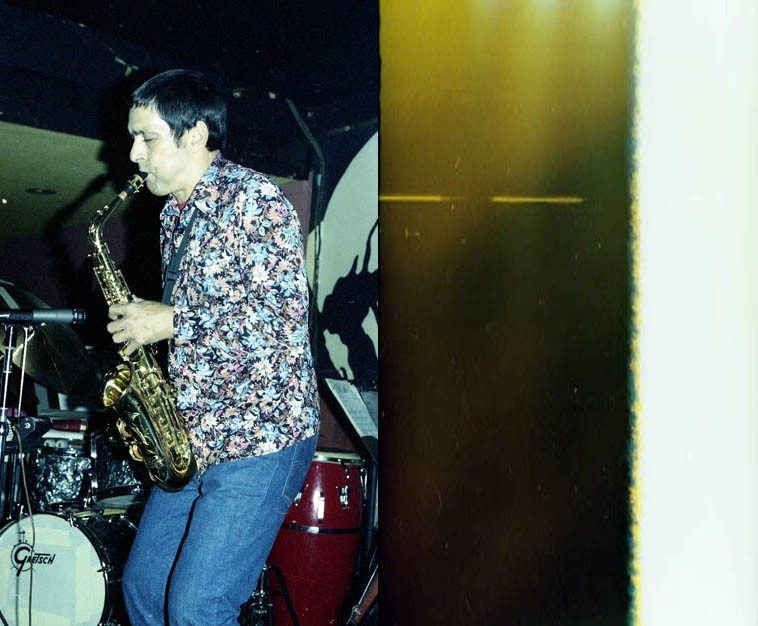 I love putting Art Pepper on the airwaves, people love his energy, and old heads remember what it was that originally attracted them to this jazz music: Honesty & Fire —- photo by Mark Weber —- Donte’s, North Hollywood —- April 27, 1977 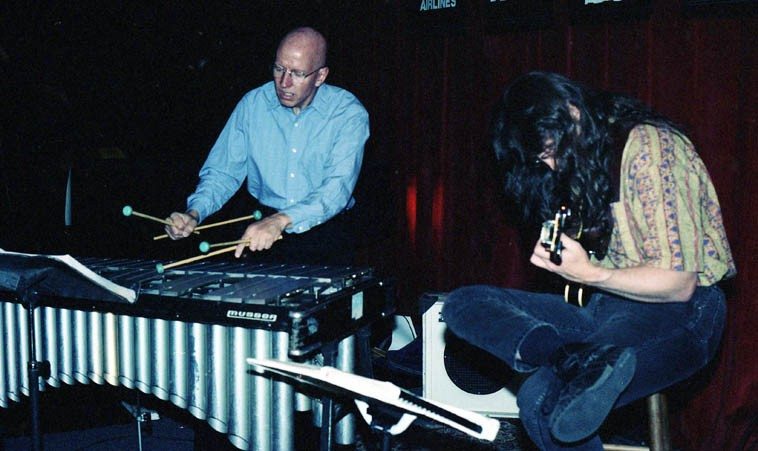 Chris Allen, vibraphone; and Lewis Winn, guitar —- Albuquerque & Santa Fe have so many A-List musicians it’s some sort of cultural efflorescence —- Chris drifted down here from Denver in the mid-to-late 90s and stayed about 15 years transforming himself into a scientist in the Genome research field (after having been at Berklee School of Music), we miss him, he went back to Colorado —- Lewis fell down here from Montana and is a staggering guitarist of six dimensions — When I took New Yorker Nick Lyons to hear Lewis, his eyes bugged out, and I said, “Didn’t I tell you, something else, eh?” and Nick said unequivocally: “A very intuitive player.” —- May 1, 1998 — photo by Mark Weber 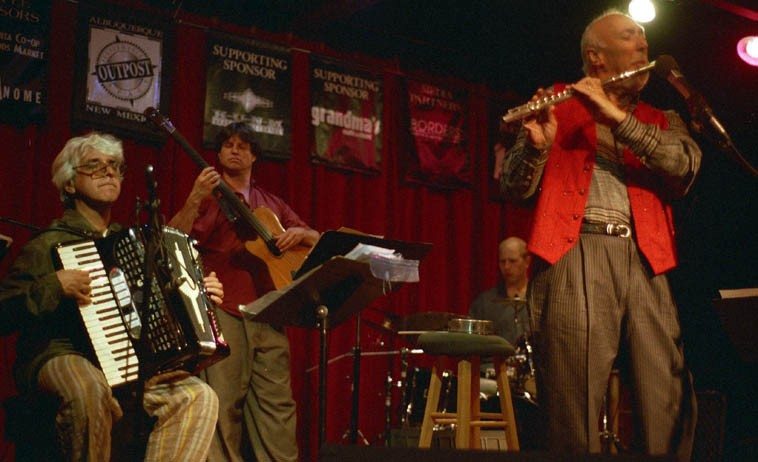 I have a real soft spot for that old trope of the beachcomber with a crazy straw hat and a flute at the ocean —- the Beatnik bhikkhu daydreamer, Mexican huaraches & a serape, goatee, jug of grape, bongos, a carefree lady friend barefoot in long flowing cotton dress, —- it touches upon our sense of wanderlust and freedom —- in my universe Herbie Mann embodied that ideal, and what a great body of work he left for us ———- Herbie Mann & Sona Terra —- opening night at the new location for the Outpost Performance Space, and on a stage that Tom, me, and JG built — built to last, baby —– (Sona Terra: Gil Goldstein, accordion; Geoff Mann, drums; Alexander Fedoriouk, cimbalom; Paul Socolow, bass; Bruce Dunlap, guitar) —- May 15, 2ooo — photo by Mark Weber 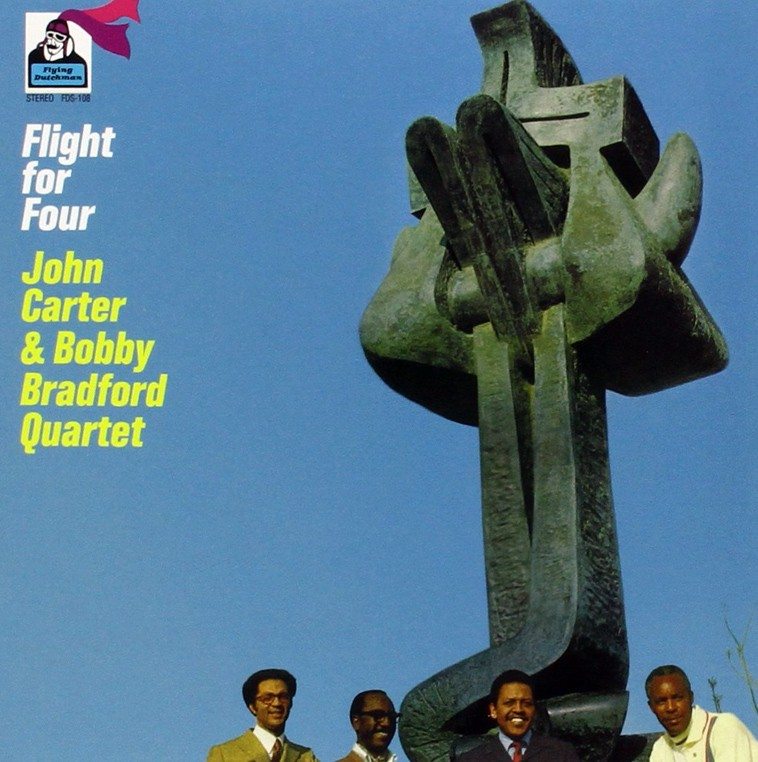 -For years I have wonder’d who the uncredited sculptor on this LP was —- the photo is by Irv Glaser and Bobby has always said that they were at LACMA (Los Angeles County Museum of Art) and obviously it had to be around the time of the album production (recording session was April 3, 1969) ) —- my artist friend, Wayne Mikosz, who lives in the little mountain village of Placitas, New Mexico, looked into it, and his research located the scholar David Eppen who peered into the LACMA storage bins (the sculpture is not presently on display) and answered all my questions: The piece is by Romanian-born Canadian artist Sorel Etrog (1933-2014) entitled “Moses”(1963) — it is cast in bronze and hollow, according to David: “Etrog actually created three such sculptures, cast in bronze and hollow, with the others currently situated in Los Angeles, and Tel Aviv.” One copy was on display at the 1967 Expo in Montreal. See > http://www.uleth.ca/unews/article/proud-history-moses#.VRqibivwL9p 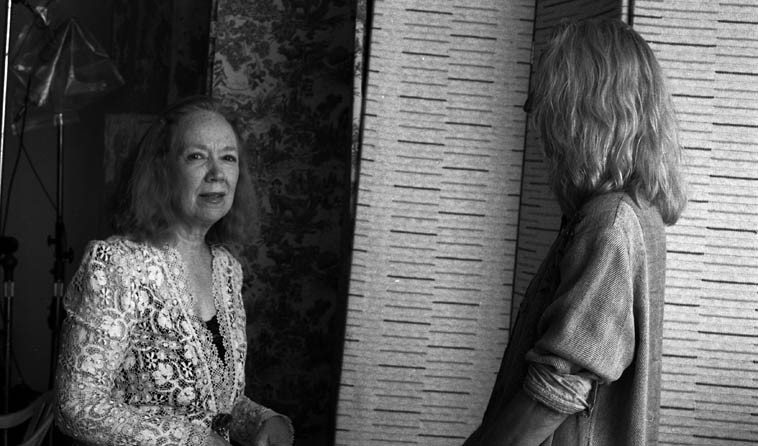 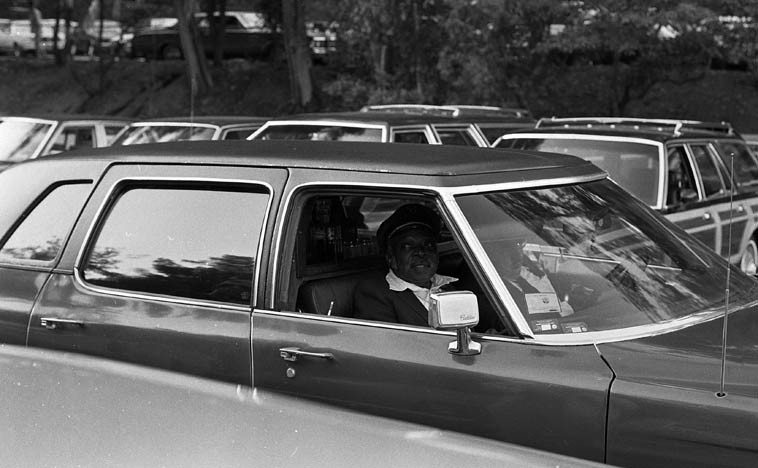 Ridin’ in style: Count Basie arrives at Hollywood Bowl —- The quiet genius behind the idea of a band put together out of riffs —- June 20, 1981 — photo by Mark Weber 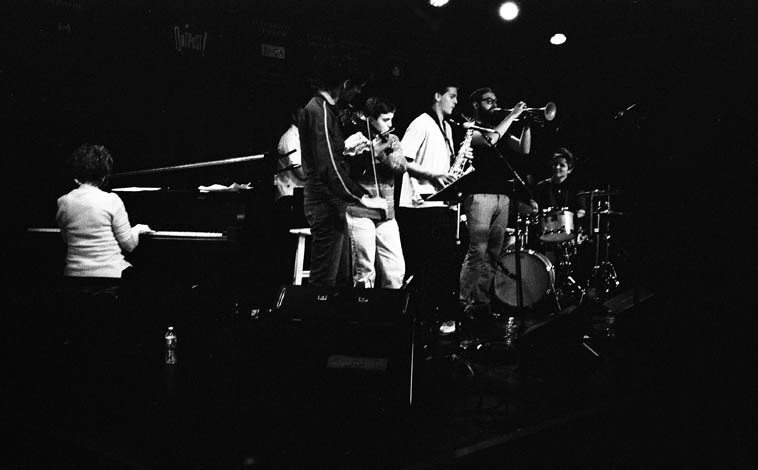 Afternoon workshop at Outpost Performance Space with Allison Miller’s Boom Tic Boom —- that’s Merit Wise on alto sax who is 8th grader at Madison Middle School, and his sister Justice Rebecca Wise on flute! who is the Outpost intern and a student at Sandia High School, Albuquerque USA —- If you’re in the area stop by Outpost on May 17 at 1 in the afternoon for Justice’s Flute Recital and check out who’s coming up in the music — (Boom Tic Boom: Kirk Knuffke, cornet; Jenny Scheinman, violin; Todd Sickafoose, bass; Myra Melford, piano; and Allison on drums) — photo by Mark Weber — October 10, 2o14 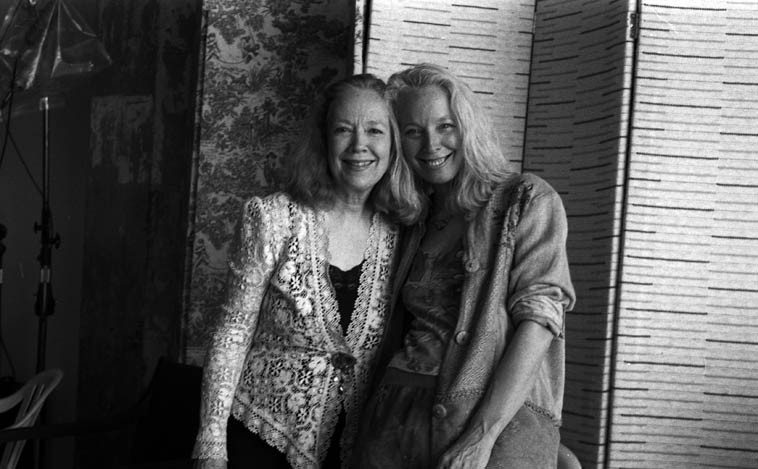 There’s a lot of music in these two ladies — Connie Crothers & Kazzrie Jaxen — Brooklyn NY — September 18, 2oo5 — CC and Kazzrie tap into the clouds and mists that surround mountains — photo by Mark Weber 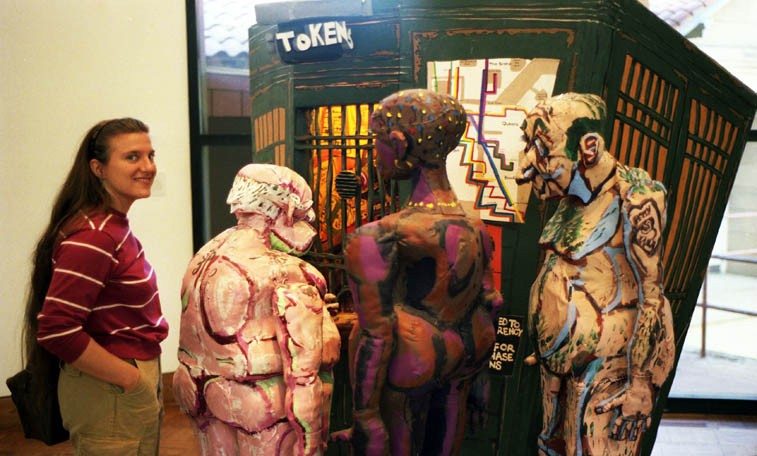