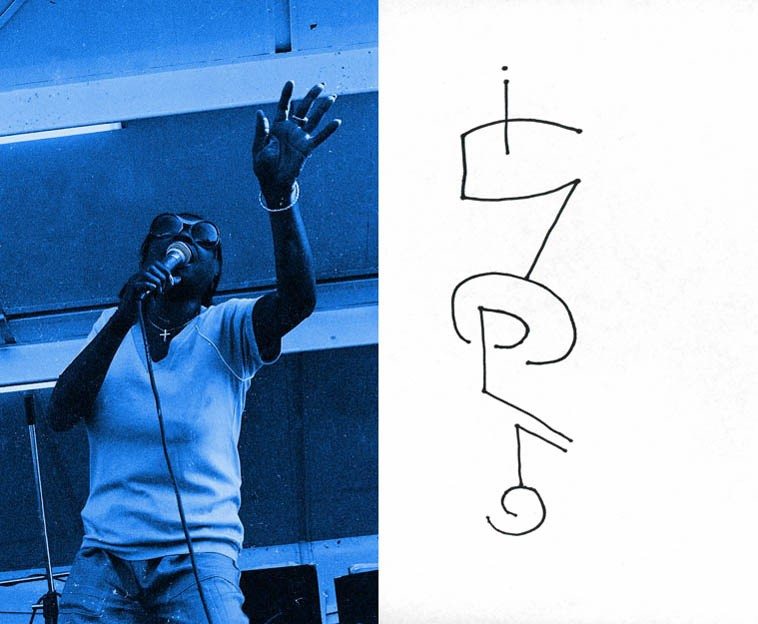 Esther Phillips who in another time was known as Little Esther —- Watts Towers Jazz Festival —- July 16, 1983 —- photo by Mark Weber

To me, an artist’s life is a long journey
toward peace & tranquility ——-

One hopes for that

possible eventuality, some sort of acceptance
and salvation, a release into serenity ——-

I sometimes wonder what the message is when I hear
a 70-year-old tearing the shreds out of a saxophone
for an hour or more? That sort of thing I can
understand coming from a 20-something,
so,
I realize that maybe we do not share the same
vision of the artist’s path?
Then again, maybe
this saxophonist is way ahead of me and has
discover’d life to be a cosmic joke?

Obviously, it depends on what you need from art
and the practice of making it —
it being purely play,
as good a way to occupy one’s life as any —-

Everybody’s journey is personal, that is obvious, mine
is to the heart of the sun, sayeth Umma Gumma, to
where pure peacefulness emanates in effusive glory 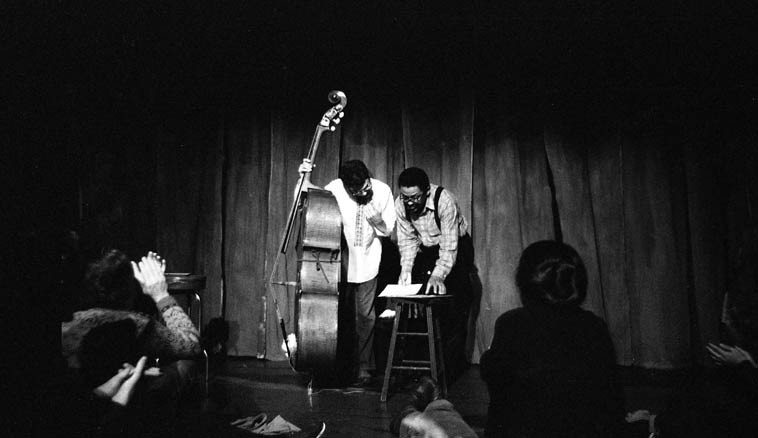 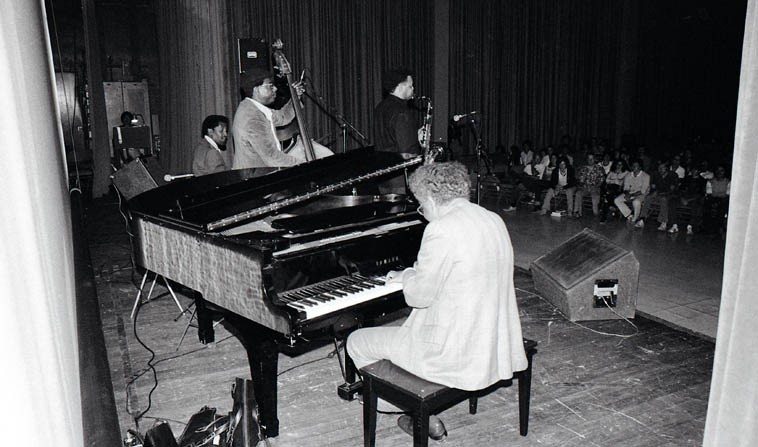 Jimmie Smith, drums; Larry Gales, bass; Plas Johnson, tenor saxophone; Dolo Coker, piano —- UCLA Ackerman Grand Ballroom — May 14, 1980 — photo by Mark Weber —-Dolo was a bopper of the first rank, he moved to Los Angeles in 1960 and became a mainstay on the scene working in television and in the clubs w/Dexter, Pepper, Leroy Vinnegar, Teddy Edwards, Blue Mitchell, Harry Edison, Frank Butler, Herb Ellis, Supersax, etc —- it’s hard to believe he only lived to age 56, he always seemed so senor to me when we talked, but brain cancer took him out in 1983 — I have some great records of him we’ll spin on the New Mexico airwaves. 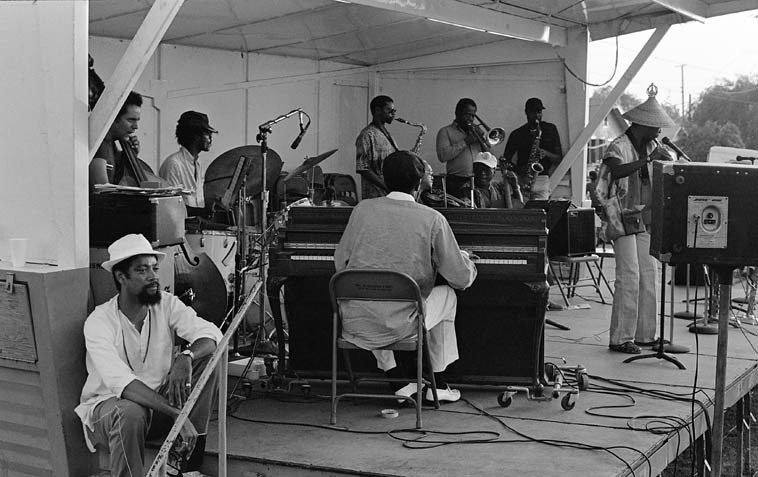 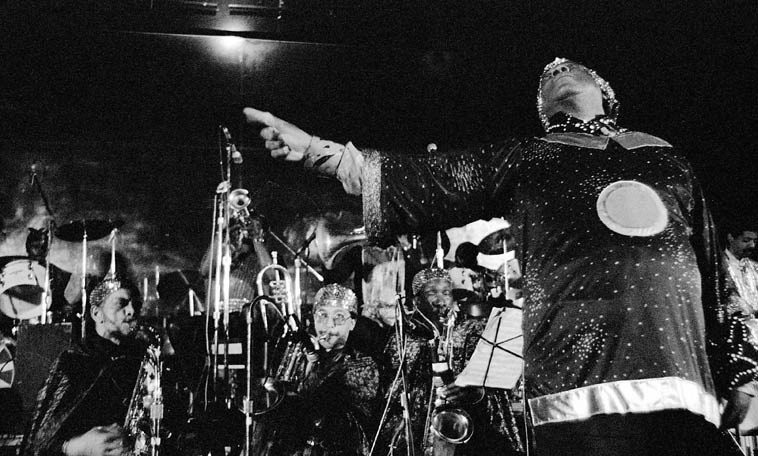 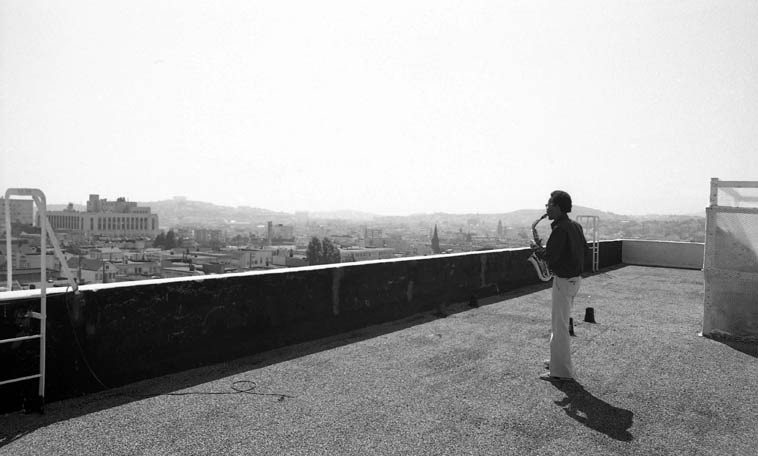 Lewis Jordan on his roof in the Haight overlooking San Francisco — September 1, 1978 — photo by Mark Weber 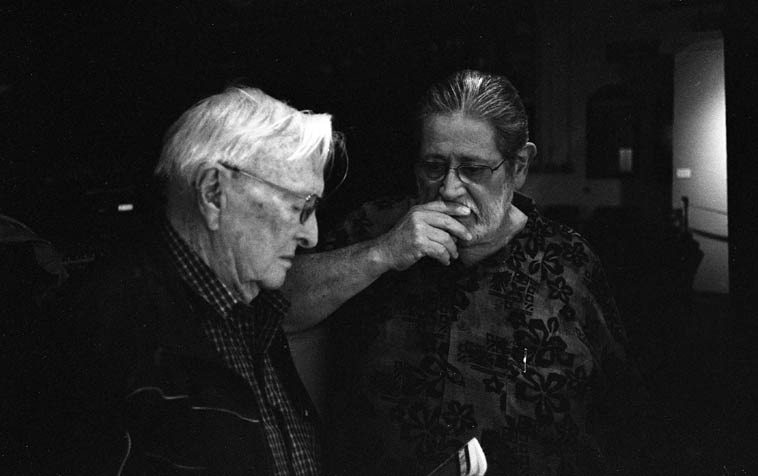 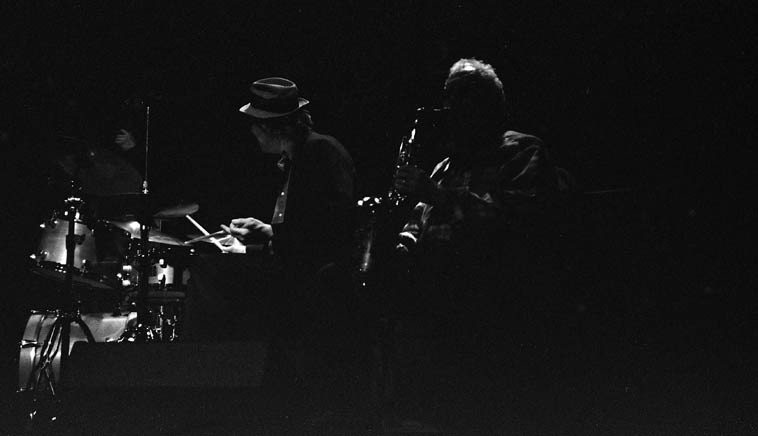 Lee Konitz Quartet in Albuquerque —- March 12, 2o15 —- George Schuller, drums; Dan Tepfer, piano; Jeremy Stratton, bass — photo by Mark Weber —- Before Lee arrived the rumor was that he has been singing on his performances, and I’m happy to report his “syllabification,” (Lee’s word) which strikes me as the most correct term for his way with vocalization (rather than scat) was wonderful, it struck me (if I may be permitted to stray into the realm of psychoanalysis) as a person in their later years returning to something of his youth: Lee’s being his early studies with Lennie —- (“We are all of us palimpsests, we carry the past around, it comes surging up . . .” — Penelope Lively) —- And his tone on the alto was deeply heart-felt, a beautiful human sound —- James Newton, who was in attendance (he and George have a Dolphy connection) said to me about Lee’s sound: “Every note has so much history in it, wow” 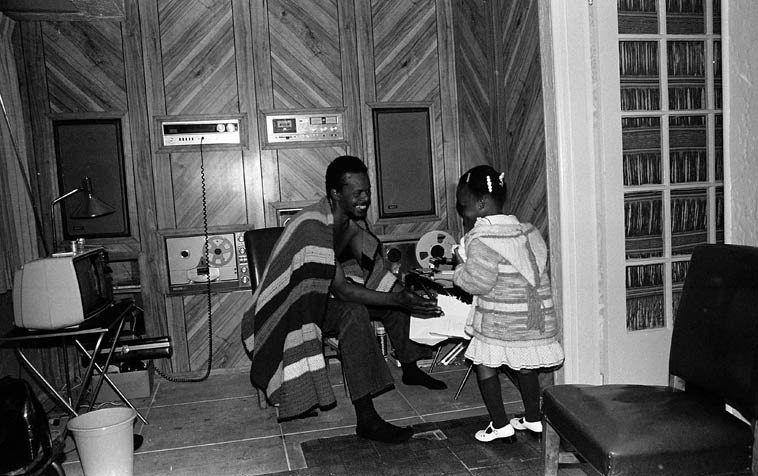 We spent a lot of time in this room at Horace’s listening to music — Horace liked to record the concerts of Pan Afrikan Peoples Arkestra and that’s mostly what we listen’d to, a lot, and smoked a lot, also —- this photo is taken from the vantage of the big couch —- a Sunday afternoon on 11th Avenue in Los Angeles with Horace Tapscott and his granddaughter (Renee’s child) in the den —- Cecelia told me that that was Horace’s “security blanket” — photo by Mark Weber — April 18, 1981 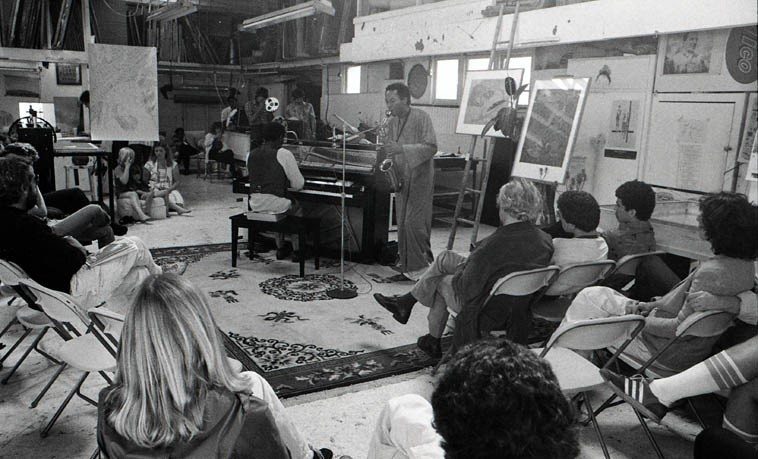 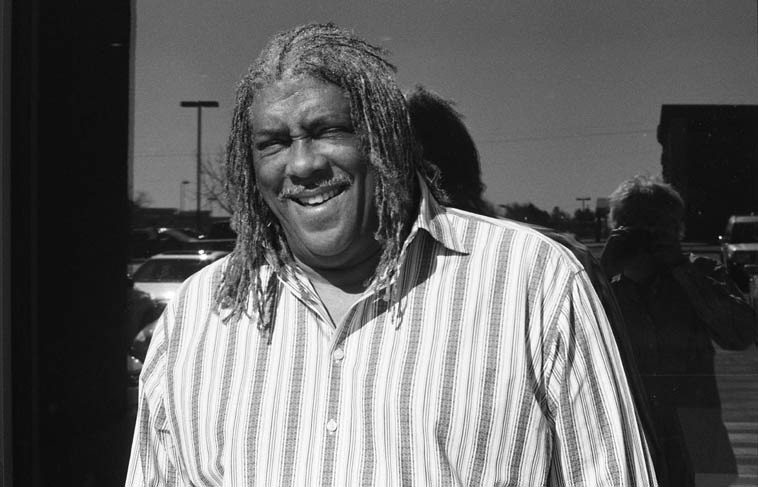 James Newton and I go way back —- we both grew up in the suburbs east of Los Angeles, separated by Kellogg Hill —- One of my favorite memories is a car-full of us (my blue Volks bug) driving down the freeway at night singing at the top of our lungs “The sound of joy is enlight’ment / Space, fire, truth, is enlight’ment / Space fire / Sometimes it’s music / Strange mathematics / rhythmic equations // The Sound of thought is enlight’ment . . .” singing along with John Gilmore and June Tyson from the Foundation Maeght 1970 Sun Ra Arkestra recordings —- photo by Mark Weber in palimpsest with James Newton — February 6, 2o15 Albuquerque —- Note the New Mexico squint (the mid-afternoon sun is bright out here) 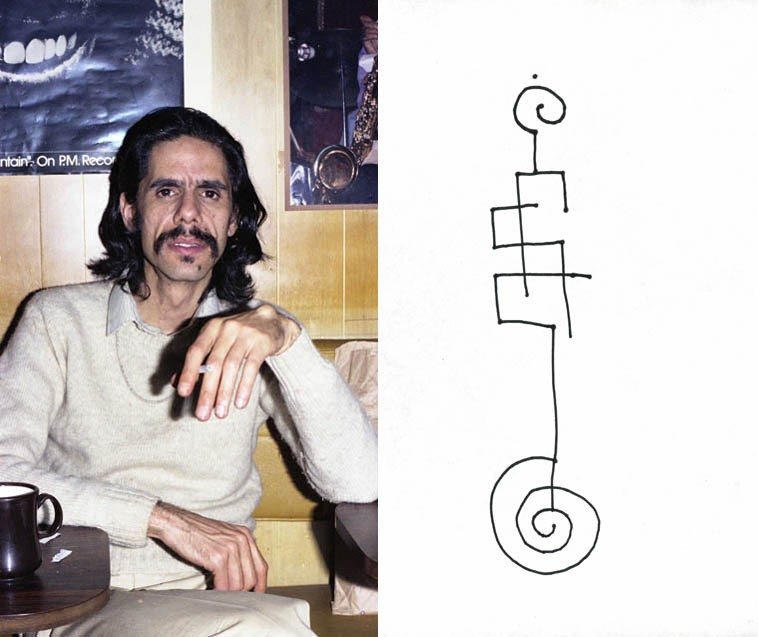 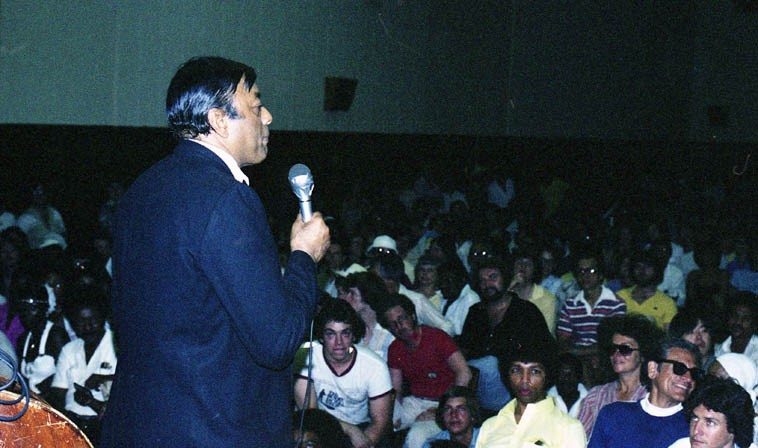 Master of Ceremonies Marl Young presiding over the Blue Mitchell Memorial at Local 47 — June 10, 1979 —- I always thought that Marl was the union president, you saw him all over town (checking union cards and always in good spirits) but reading his LA TIMES obituary I see he was Local 47 Secretary — photo by Mark Weber 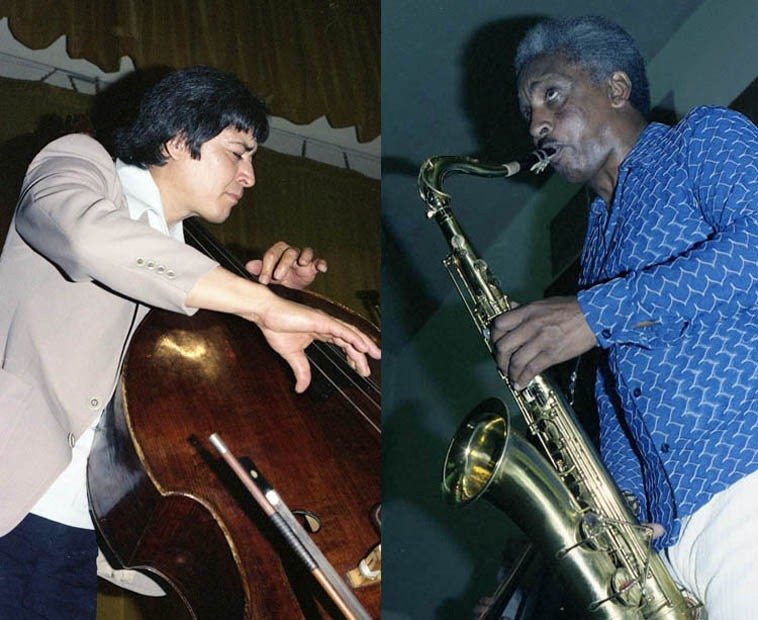 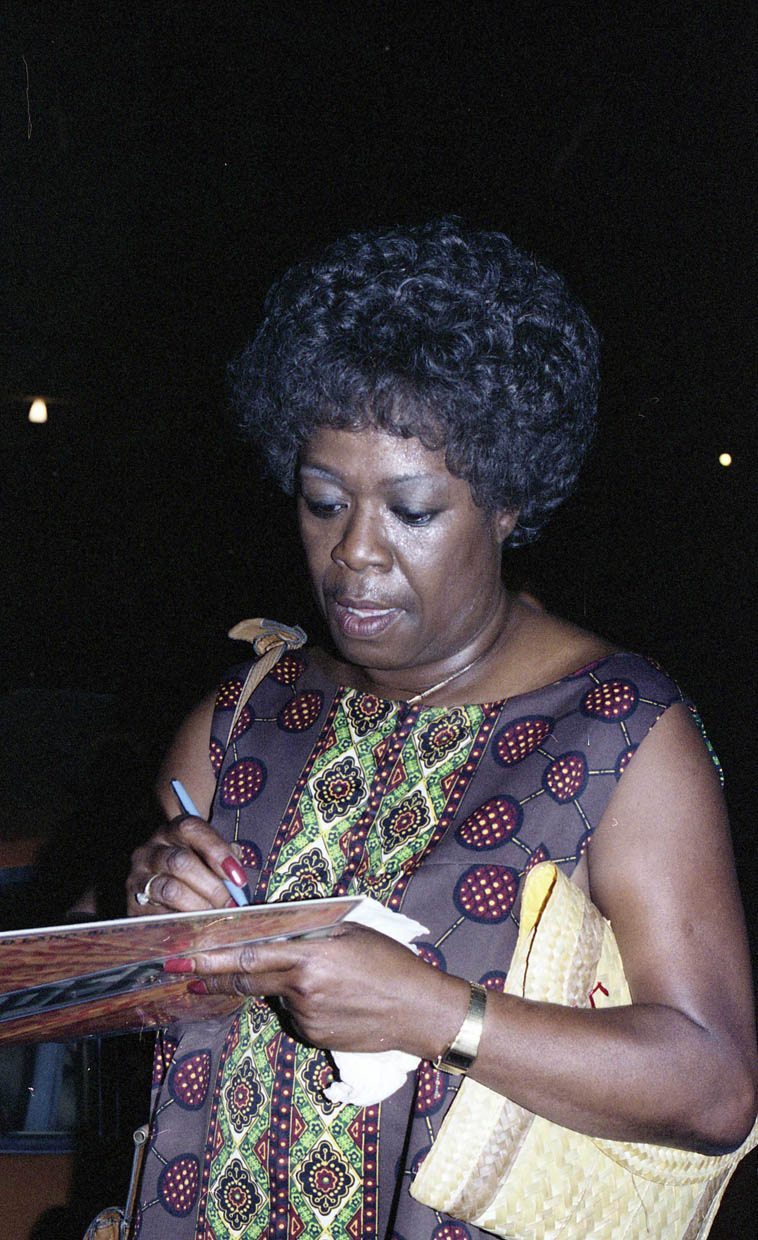 I caught Sarah Vaughan at least a half dozen times over those years, she lived in Los Angeles, as did Carmen and Ella, and it is one of my great regrets that I never saw Ella perform —- One of my favorite Sarah stories is standing in the wings at Bridges Auditorium watching her sing, standing next to Mel Torme and someone who must have been Mel’s son because they looked exactly alike, and as Sarah held one of those long vibrato swoons Mel and his son looked at each other with eyebrows raised and silently mouthed WOW —- For this shot I happen’d into her outside the union hall and asked if I could snap her picture, I had the 28mm wide angle on the camera and had no time to switch lenses and focusing wide angle lenses is difficult, especially in the dark (that’s why there’s a flash on this shot) but you need to get it right, not that I was taking too much time, but Sarah barked at me, “Hurry up! HURRY UP!” which was pure Sarah, it was almost a rite of passage to be barked at by Sarah, I’d seen her bark at Basie, too, so I joined the club —- photo by Mark Weber — June 10, 1979 —- Pavarotti said that you must have the nerves of a thief to be a singer, and I might add, you must also be brave when you photo Sassy 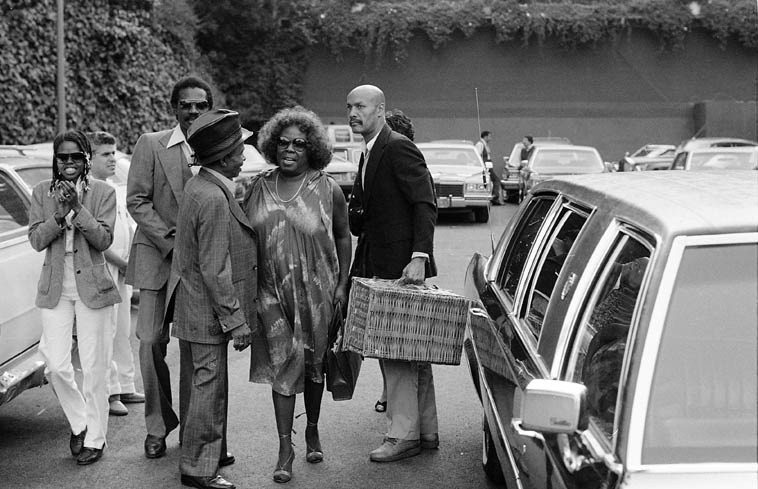 Here’s another shot of Sarah Vaughan, with trumpeter (and my hang buddy) Lammar Wright Jr at Hollywood Bowl — June 19, 1982 — photo by Mark Weber 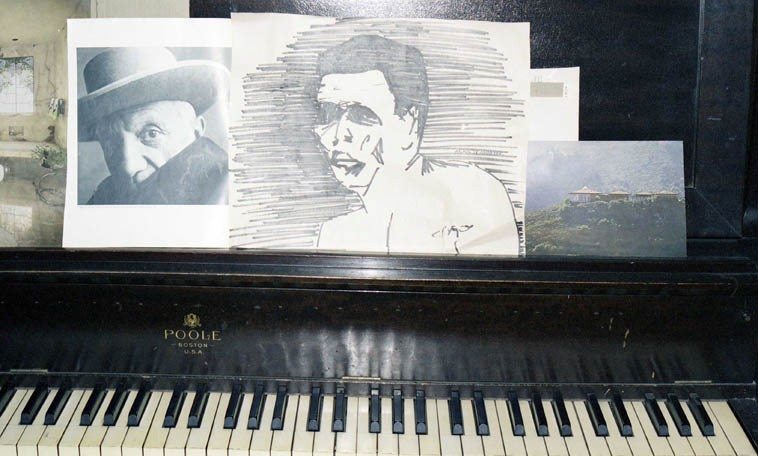