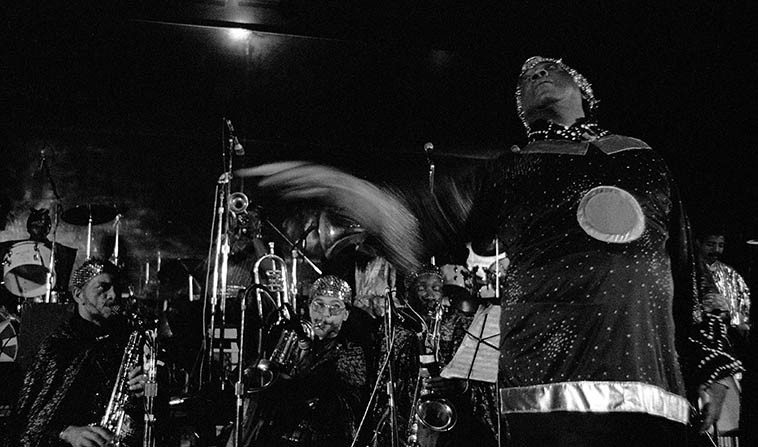 Sun Ra always said that the hippies were his ideal audience. I was certainly part of that demographic. His Arkestra had been in existence since 1948 (in Earth time) but it wasn’t until the Sixties that his audience grew. Just the sonic complexity and luxuriousness was enough to grab you —- and who could resist a band that played tympani, gongs, log drums, upwards of 3 trapkits, Rhodesian bells, bongos, Egyptian sun bells, cowbells, boom bams, and space lute? Sun Ra always reminded us to look outwards to the stars.

Today on the show I want to focus mainly on the late 50s era of Sun Ra while the band was still in Chicago and maybe some of the transition into 1960 when this communal ensemble moved to NYC. Already in place was the sax section of Marshall Allen, John Gilmore, James Spaulding, with both at Patrick Patrick & Charles Davis on baritone; add Lucious Randolph on trumpet, and Ronnie Boykins on bass (John Ore would join in NYC), and the master himself on piano whose arrangements these years are completely in the big band tradition but sound like no big band that ever existed — mostly groups anywhere from 7 to 12 pieces. A few years ago I walked into one of the big box athletic gyms and was shocked to hear Sun Ra being played at the front desk. I said to the receptionist, “That’s SUN RA” (it was one of the Delmark records) and she looked more shocked than I was, “And said YEH, how can you tell?” Well . . . . .

I first caught Sun Ra in November 1974 —- I lived in the Los Angeles area and when rumors hit that Sun Ra would be playing a week in San Francisco at Keystone Korners in North Beach, my friend George and I outfitted my 1963 Volks bug for a camp-out and caught the entire week of shows and slept in this car parked on side streets. (We didn’t have a lot of money. Most of the hippies I knew didn’t have money in any great amount.) Sun Ra even took the time to come out afterwards and talk with us. We were in awe. We had no special place to go (it was cold out there) so we hung around as long as possible inside the Keystone. I don’t remember too much about what we talked about other than that he was very patient and kind. I was lucky to catch his band many times after that. (I was in between cameras in 1974 so there are no pictures from this engagement.) I worked in construction these years which was seasonal (I know you were thinking: Just how did this Weber escape the work camp and go off on these pleasure excursions?) so there wasn’t that much work in the winter pounding nails. And the rent on the little alley house was only $60/month. The education of a poet should involve knowing how to build a house, fix a car, grow a garden, ride a horse, bake bread, sleep in the woods, know what QWERTY means, and survive jail. And yoga.

At the Keystone we asked about buying some Saturn records and Ra told Eloe to go and get the records and he dragged out a steamer chest with the unlabel’d LPs in paper sleeves and he’d assemble them grabbing various white album jackets that had hand-colored abstract designs and the only way we could tell the LPs apart was by their matrix number, no other information: 5 bucks apiece. I could afford 6 or 7. AND I bought a few 45rpms as well.

When you asked Sun Ra for his autograph he always signed in cursive: Space Age Greetings from Sun Ra 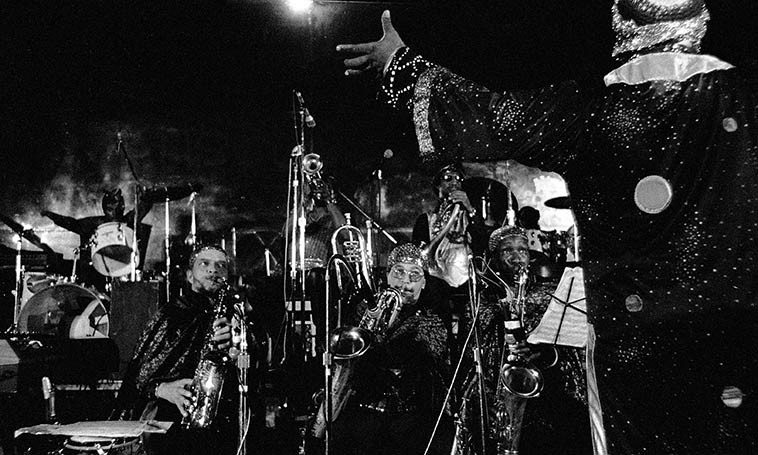 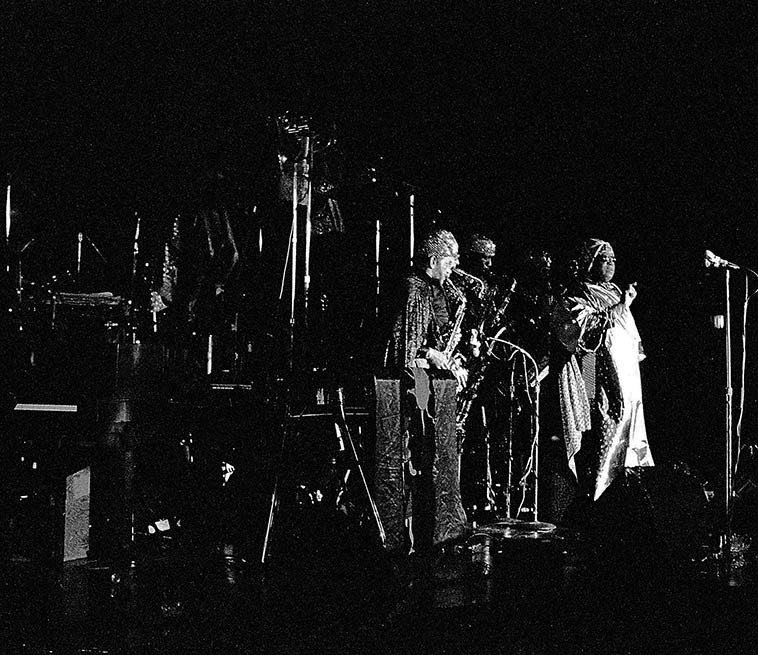 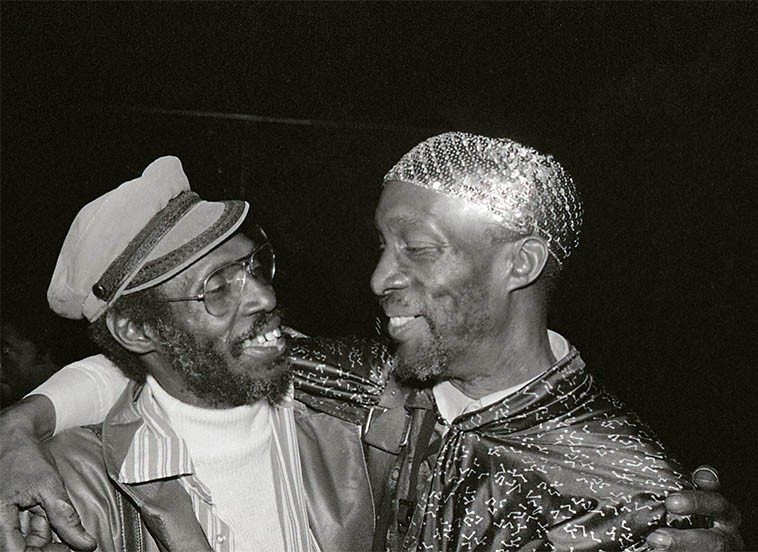 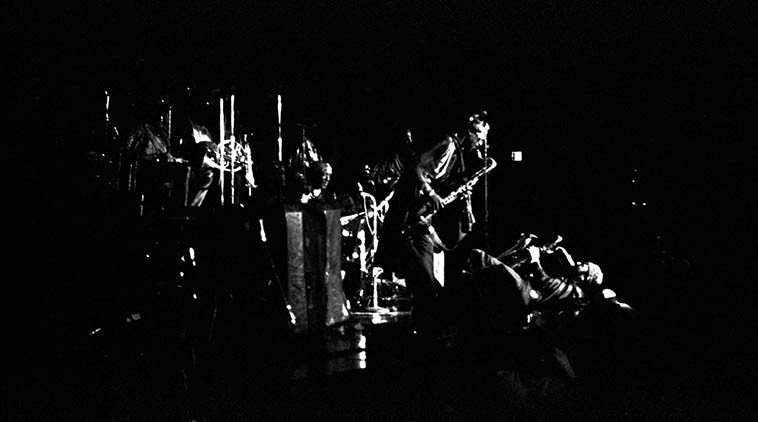 Arkestra in excelsis: Is that Eloe Omoe, bass clarinet with Danny Thompson, baritone on his back? — April 2, 1981 — photo by Mark Weber 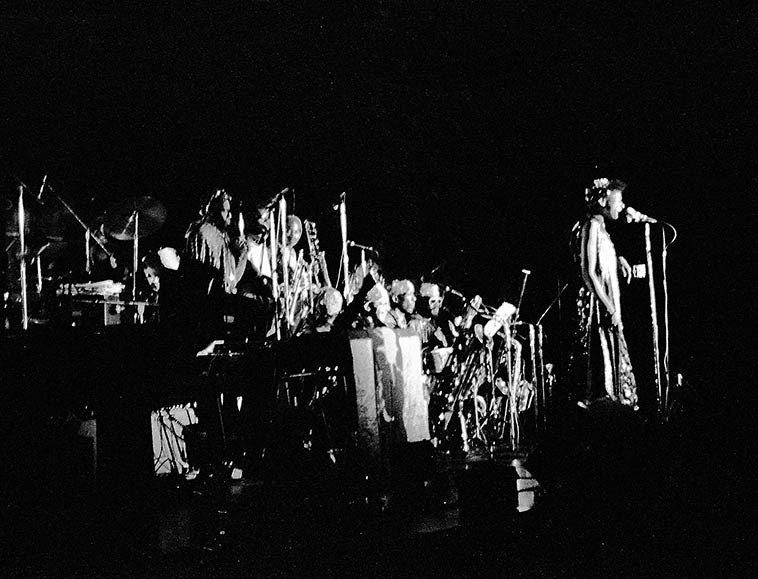 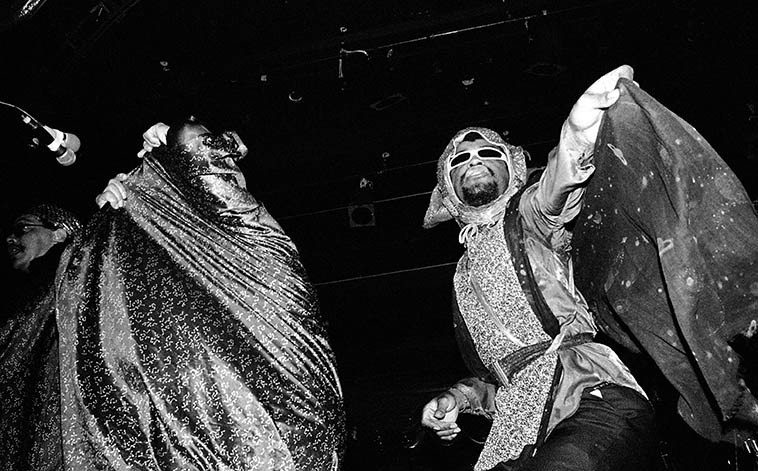 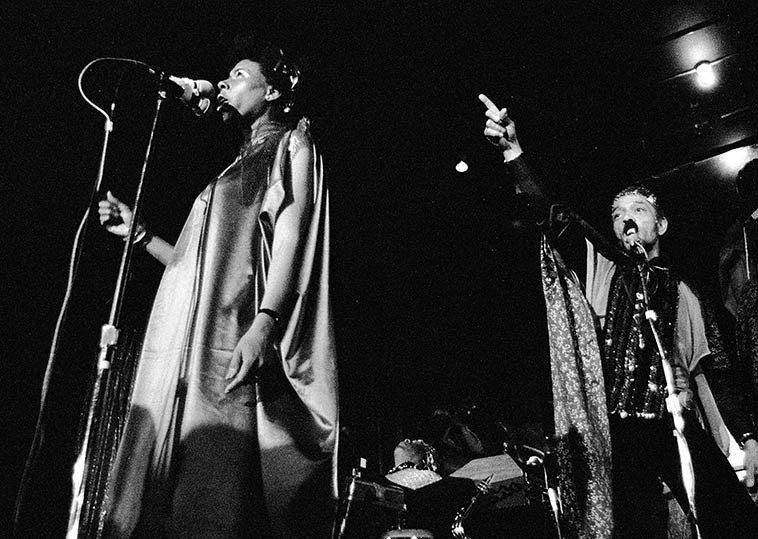 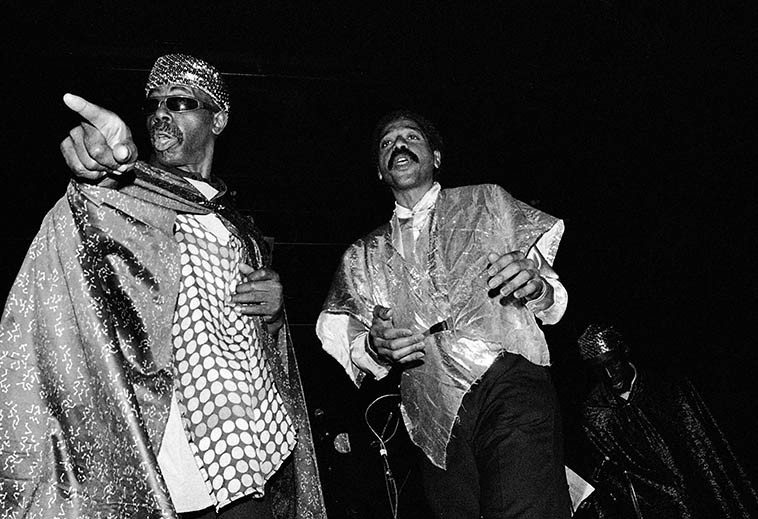 Arkestra channeling the forces of the universe — April 2, 1981 — photo by Mark Weber 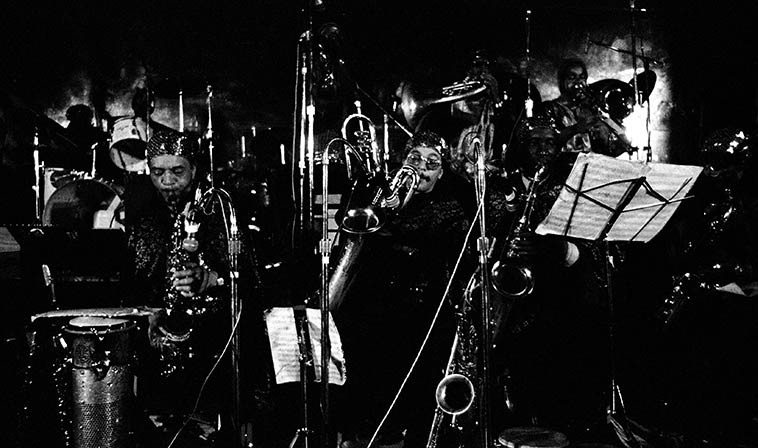 Sun Ra Omniverse Arkestra — April 2, 1981 — photo by Mark Weber — Horace Tapscott told me how the Sun Ra Arkestra show up at his & Cecelia’s house on 49th Street in the middle of the night driving 4 old beat-up cars and crashed all over their house — this is probably the 17-piece band that played at Dorsey High School in April of 1969, their first appearance in Los Angeles, as reported by John Szwed on page 271 of his Ra biography — Horace always laughed how they were so tired out and slept anywhere, down on the floor, curled up by the couch and on the couch and slumped over in easy chairs and all over . . . 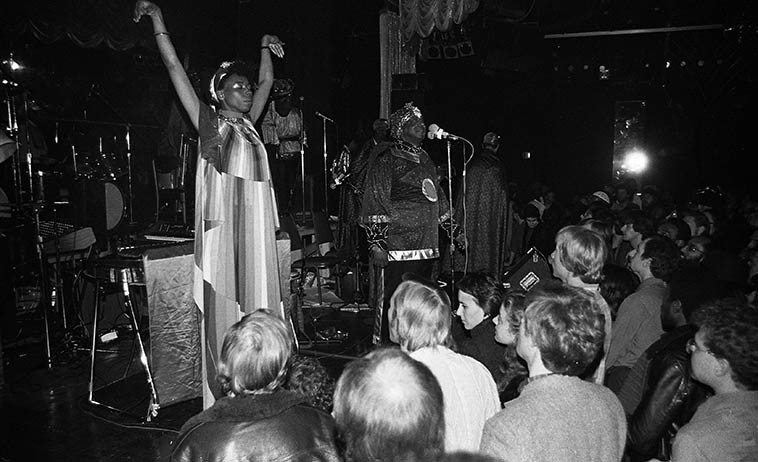 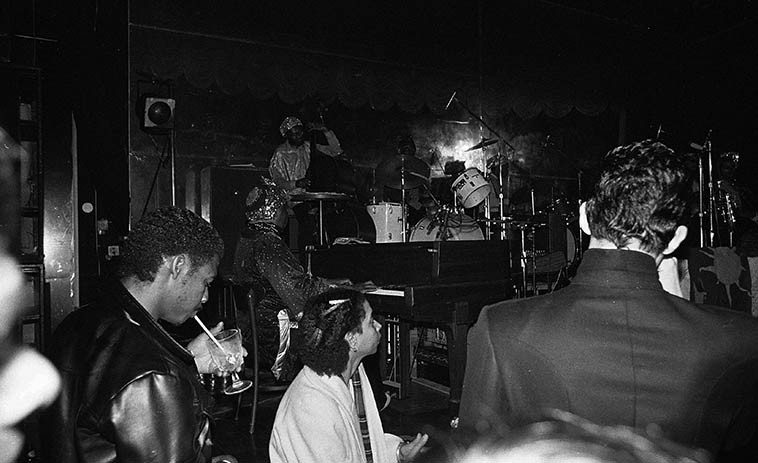 Sun Ra — November 22, 1981 — photo by Mark Weber —- The presence of the Other was never far away from Ra, he always looked hard to the ineffable, everything was spiritualized for him —- Even though there might be a space of five years between catching the Arkestra, Sun Ra always remember’d me, it was quite mysterious 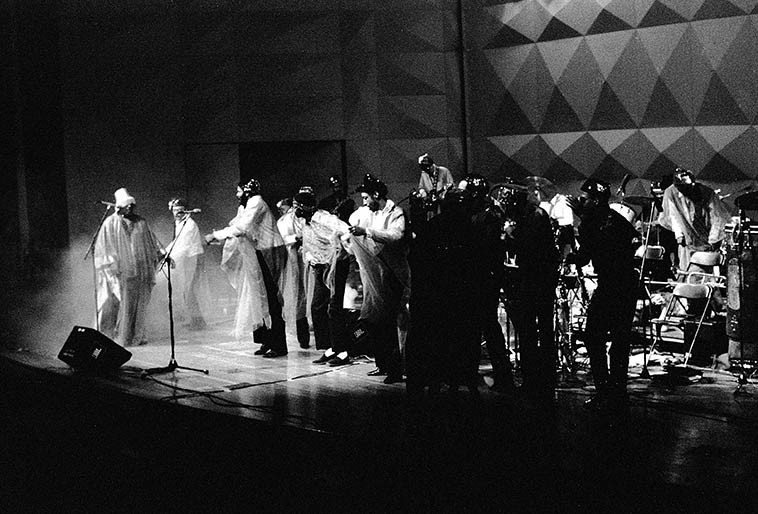 Sun Ra & The Solar Myth Cosmic Jetset Arkestra w/June Tyson, Michael Ray, Marshall Allen, John Gilmore, Martin Banks — April 16, 1988 Cleveland, Ohio —- This was the first time my wife Janet had ever witnessed Sun Ra: The large concert hall full audience of about 2,000 at Cuyahoga Community College opened with the lights going down to near darkness, then a saxophone screeching like a pterodactyl amid horn section chaos, trombone wailing like an elephant, giant log drum rumblings, you could see smoke (dry ice probably) Then > BANG BANG giant flames erupt from a pyro device from stage left and right, smoke crawling close to the floor and standing center stage with that lampshade hat, his arms outstretched, diaphanous robes swirling was SUN RA as the Arkestra went into full big band intergalactic swinging furious blast-off —- I looked over at my girlfriend (not married yet, she still in med school) and her eyes were bugged out! (Later, backstage when Sun Ra found out she was a podiatrist he had her check his feet) —- photo by Mark Weber 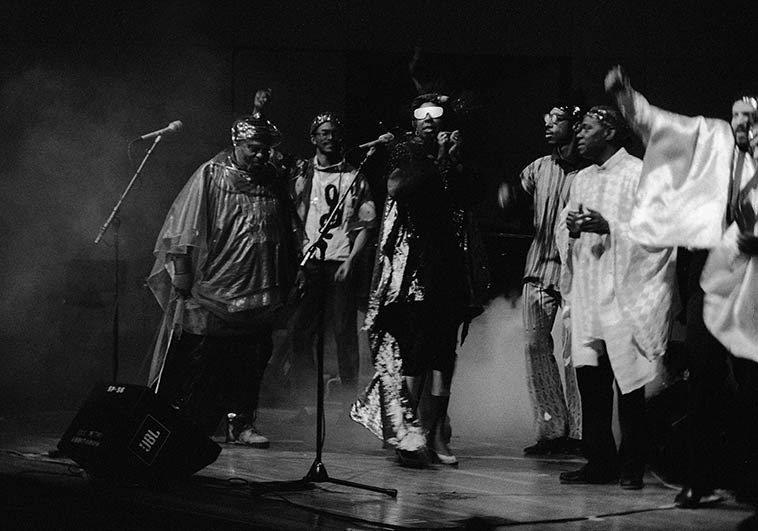 He switched hats — this must be mid-concert (because he put the lampshade back for the ending dance & chant) — April 16, 1988 — photo by Mark Weber 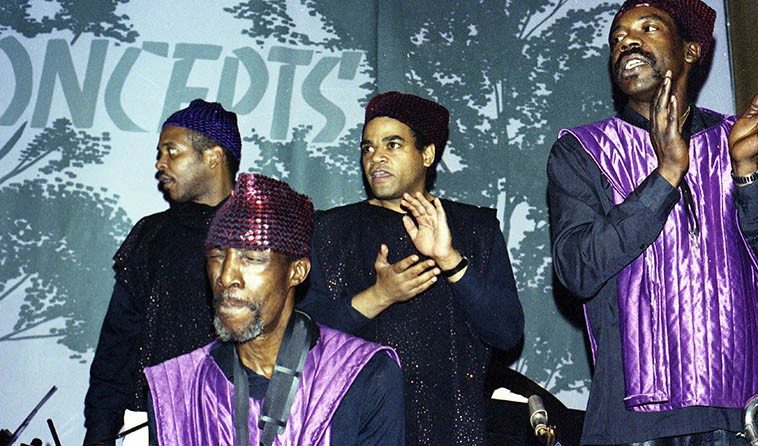 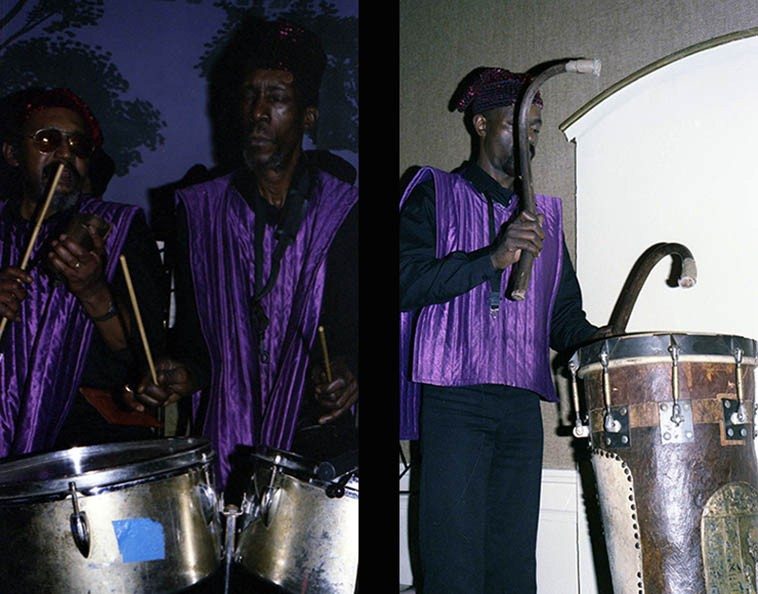 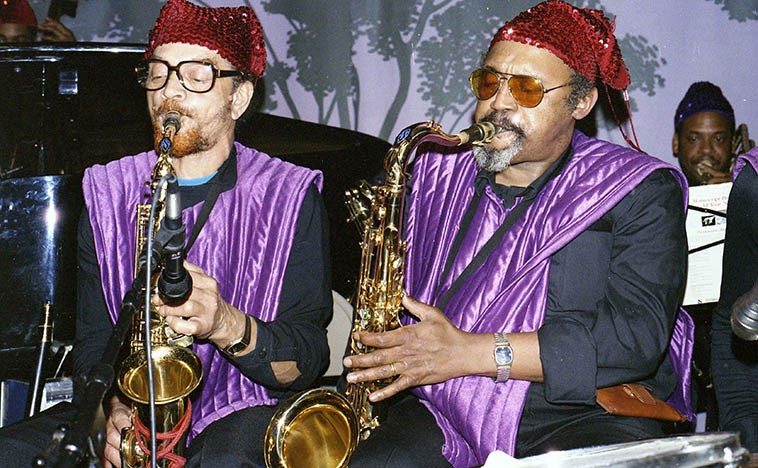 Oakland tenor Ronald Wilson sitting in with the Arkestra this night, with Marshall Allen, alto — December 4, 1985 — photo by Mark Weber — (Ronald Wilson made records with Ra in 1960 in Chicago among other jazz dates in that town, so I guess he had migrated to the Bay Area) —- Sun Ra has a lot of fun turning pop tunes into Sun Ra philosophical statements, as in “I’ll Never Be The Same” this night, as well as Ellington’s “Hokus Pokus” 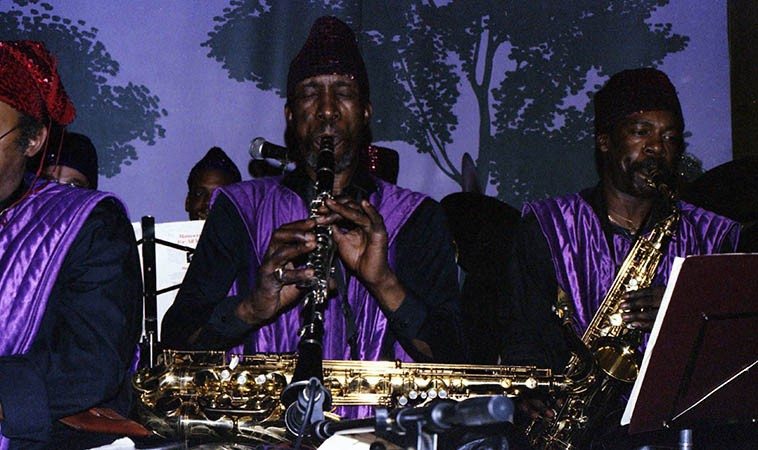 John Gilmore on clarinet — December 4, 1985 — photo by Mark Weber —- I remember the time we caught Sun Ra at Keystone Korners (1974) that Gilmore sat at the drumset for long stretches playing a very minimal style (you could tell he wasn’t a drummer) BUT hell’s bells, it was John Gilmore, so we listen’d —- in later years of the Arkestra, Gilmore had a set of timbales in front of him in the saxophone section 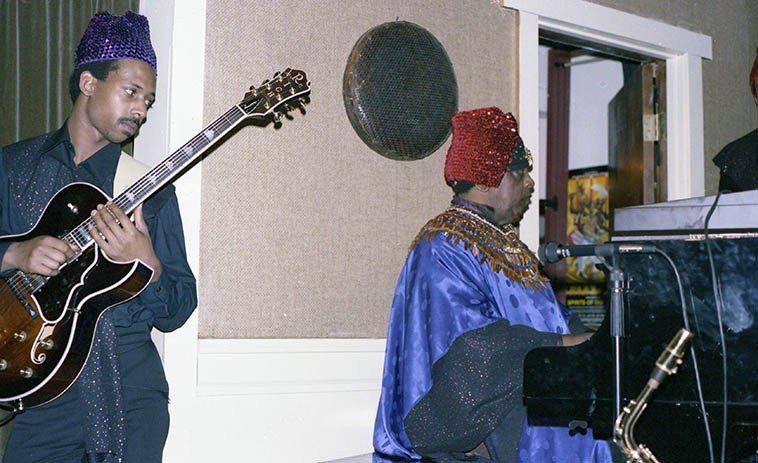 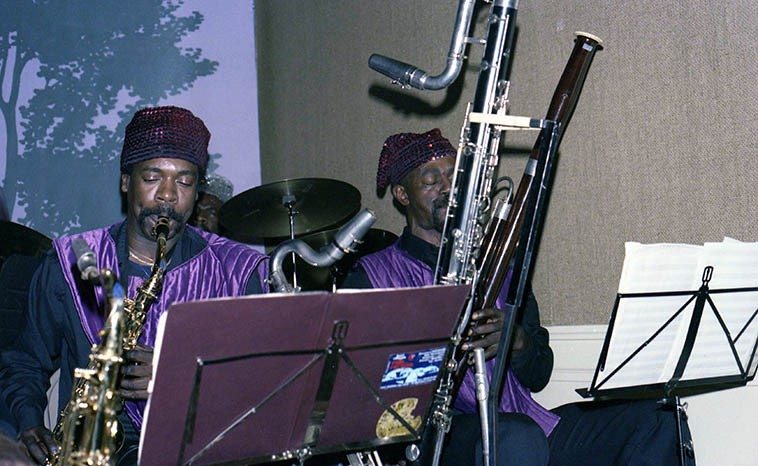 Danny Davis and James Jacson — December 4, 1985 —- photo by Mark Weber —- after this concert I interviewed Sun Ra for it seems over an hour (the recording was being done by KPFA and the two young guys I relieved might have been John & Peter Hinds of Sun Ra Research — I’ve always wanted to find a copy of that . . . )