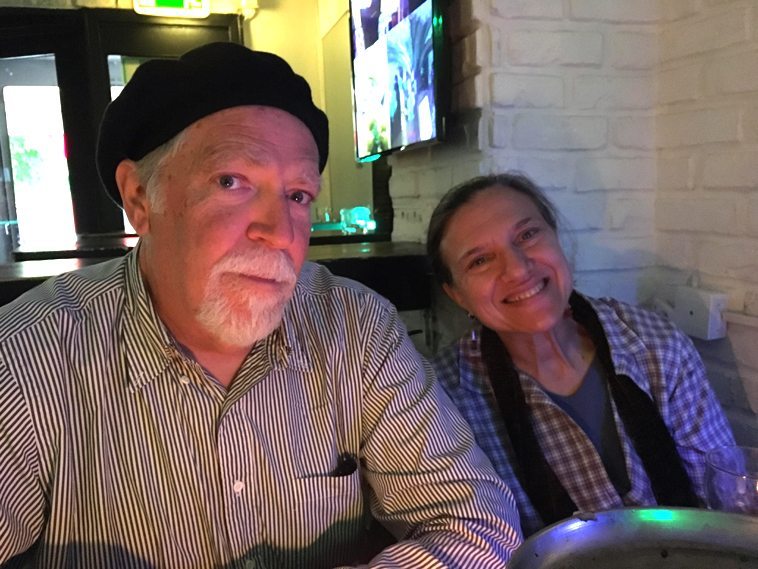 The author and wife at dinner in Stockholm (May 27) at a tapas restaurant on Ringvagen (near Skanstull t-bana stop) where the menu was in Swedish and the young waitress was Russian and didn’t know Swedish very well, either, (which is very interesting because Russia and Sweden were arch-enemies for centuries) and so, between our three languages we ordered a big platter of everything and it was good — photo by my brother-in-law Herb Brass (from Cincinnati)

I’ve heard about these guys who collect Swedish jazz and now I know why: There’s an entire world of jazz in Sweden.

Sweden wasn’t so much exotic as familiar. (Maybe it’s genetic memory?) One realizes how much of European culture was brought over to America. I don’t want to make any grand sweeping categorical statements about the Swedish as I was only there nine days, and all of that inside Stockholm. I continued to get that deja vu and race memory thing, like this is my gene pool.

I saw a lot of bikes in Stockholm. In fact, I’m going to get one of those slick baskets for my bike, mounts on the front handlebars, carry groceries. I didn’t necessarily see much more people exercising in Stockholm, I think America has them beat on that count. And I heard there were yoga studios but I never saw one, whereas in America these days you can’t throw an old shoe with hitting a yoga studio.

Personifying Scandinavian countries as “Viking” is like seeing California as defined by Hells Angels. It’s an over-used and misused trope, altogether too freighted a term to be useful anymore.

The daylight was beginning to stretch into the night while we were there — Stockholm is at the 59th parallel in the northern hemisphere — Andy Fite told me that November is the darkest month, and Boel says that the snow helps reflect what light there is at that time of year and lighten things up. I’m curious to see it then, and travel out into the country side that I saw out the airplane window: Mountains and green valleys, elvish streams, primordial forests, little villages and farms, conifers, all dark mythology down there, the Eddas, and the Kalevala (which is Finnish), and Loki.

Jazz came early to Europe. Sweden picked up immediately on Louis Armstrong’s Hot Fives where upon the concept of swing was demonstrated and immediately obvious. Louis made sure the message was very clear. In what was the highpoint of Ken Burns’ JAZZ, the scholar (and violinist) Matt Glaser points out that in the 1920s you had Einstein’s theory of space time and all of a sudden here’s an American demonstrating how melody can move backwards & forwards against time and create this explosion of energy. Jazz was E = mc2 dude, energy equals mass and speed of light times two. The histories say that Sweden got bebop early on because of their neutrality during WW2, whereas, Denmark and Norway, were occupied by the Nazis, bebop came a little later. But, actual bebop records didn’t come along until 1945, after the war, and when shellac became available again from India (the lac bug gave its all for shellac disks). At any rate, modern jazz was thoroughly entrenched in dear old Stockholm for the entire 1950s and what a glory of music came out of that. American jazz artists never missed a visit to Sweden and in many cases stayed over for years.

After Bird, it’s interesting how much of an influence Lennie Tristano was on the Swedish musicians. They not only professed an interest in Lennie’s work, but you can hear it in theirs. 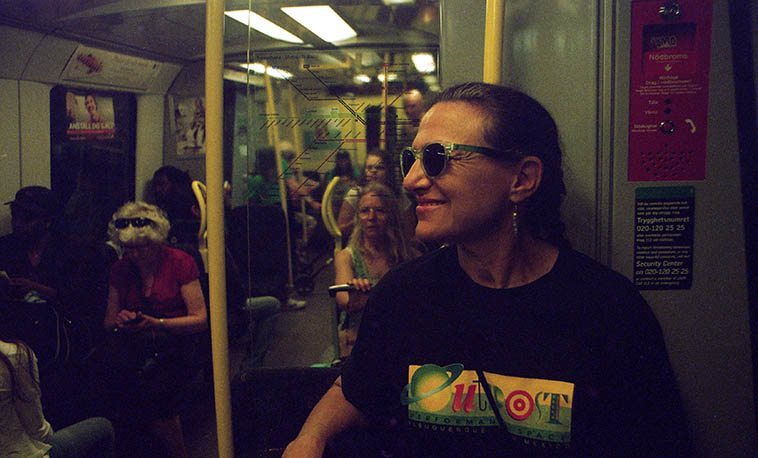 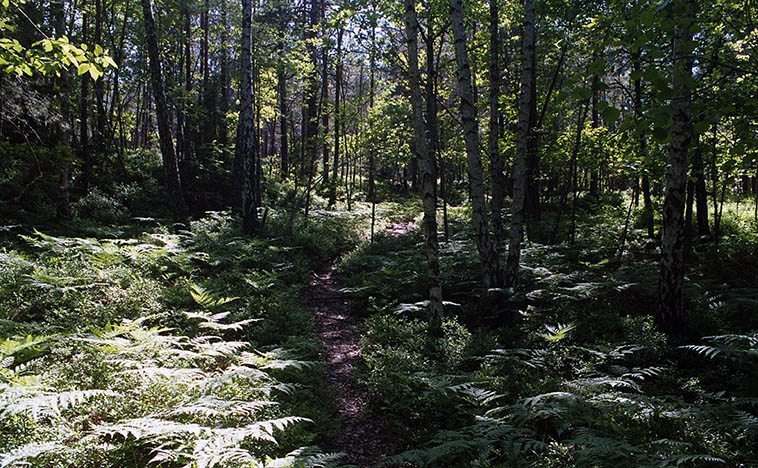 The ancient primeval boreal forest on the outskirts of Stockholm, protected nature preserve — photo by Mark Weber mid-afternoon June 2, 2o16 — When the glaciers of the Ice Age retreated circa 10,000 years ago these alpine forests popped up of tall straight pines (with bark like a ponderosa), alm (wych elm), lind (small-leaved lime), lonn (maple), bok (beech), ask (ash), bjork (birch), birds, doves, crows, deer, dragon flies, grassy meadows, creeks (vik), didn’t see any squirrels — Consequently, Homo sapiens didn’t move into Scandinavia until about 7,500 years ago (Homo sapiens first migrated into Europe 46,000 years ago) and before that the Neanderthals were around and about for 400,000 years but they didn’t do the boat thing so they never crossed the Baltic to Sweden, as well the ice was not a little bit forbidding). Homo sapiens had boating technology in a high degree — the forests of Europe were so thick and full of bears and suchlike it was smarter to use the rivers to get around. 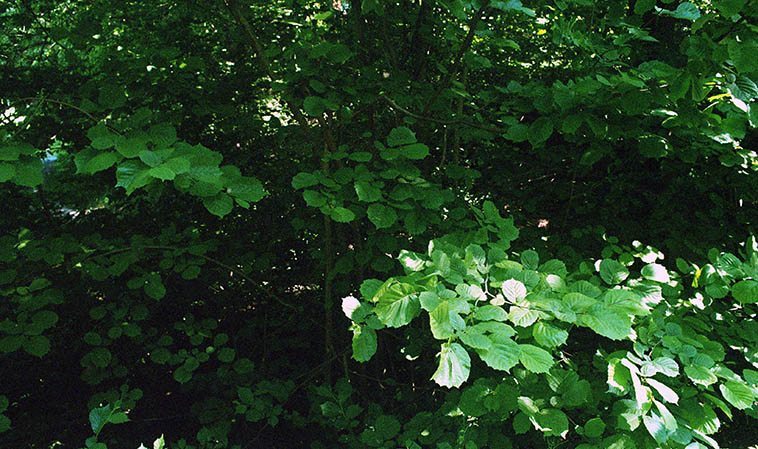 Eva Lindal’s name translates to Valley of Lind Trees. I came across this Lind tree (aka small-leaved lime) in Nackareservaten. Her father is a Swede and just turned 90. Her mother was a refugee from Nazi Germany — Sweden was very actively accepting refugee Jews during the war. Photo by Mark Weber — June 2, 2o16. 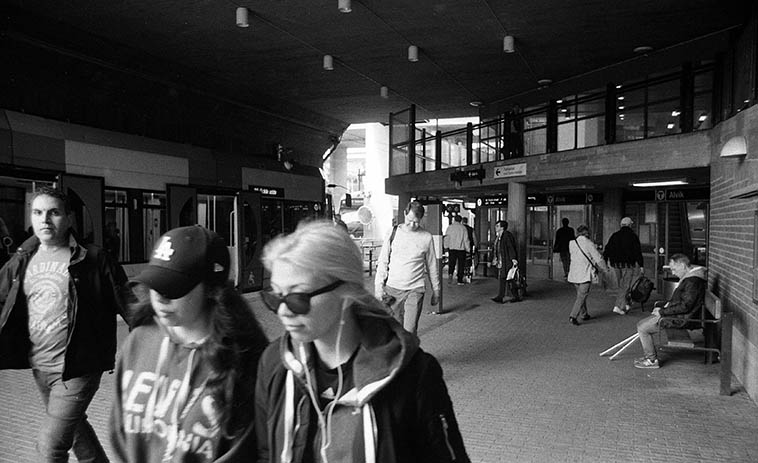 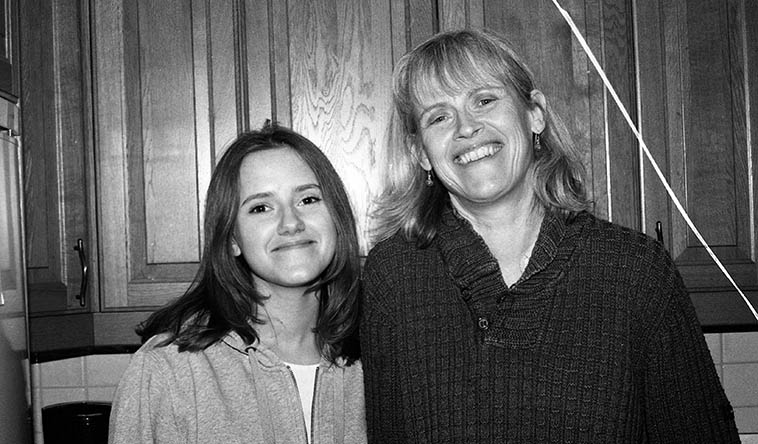 Daughter and mother: Alice Fite and Boel Dirke at home — May 31, 2o16 — photo by Mark Weber — You know Boel from the 2 records she made on New Artists records playing piano (Bob Casanova’s FROM THE INSIDE OUT, and the trio record SWEET FULFILLMENT w/ Charley Krachy and her husband Andy Fite) —- says she only picked up the organ at age 40 and now feels comfortable with it — She’s the organ player and choir director of Grondal Kyrkan —- They have a nice house, painted yellow, just a little south of the church — She met Andy in NYC when she came over on a grant to study with Blossom Dearie, but when that didn’t pan out she found Liz Gorrill for a teacher, which is nothing but good — After a couple years in NYC they moved back to her Sweden and Andy says he’s been in Stockholm “going on 22 years.” (Liz changed her name to Kazzrie Jaxen in 2001.) Alice looks a little like Greta Garbo, who was also born & raised in Stockholm. 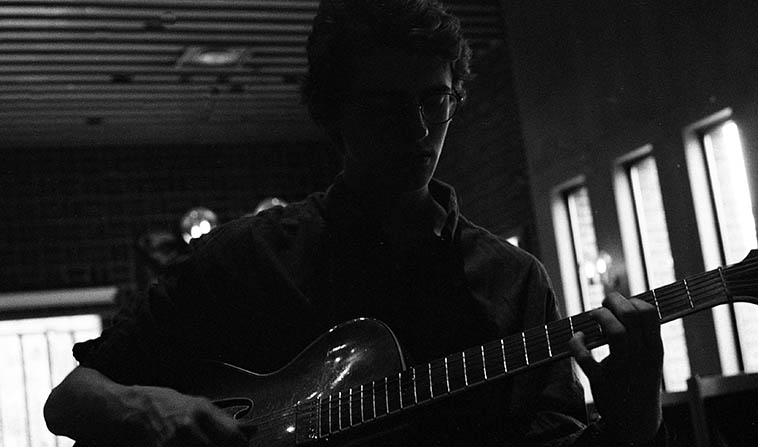 Niklas Fite on his 1949 Epiphone Broadway that his father Andy had changed to a 7-string and then changed it back before giving it to Nik, so it doesn’t have the original neck — May 29, 2o16 at Grondal Krykan –rehearsal for our gig at Khimaira the next night (Niklas has the LP copy of the renowned Misha Mengelberg 1972 recording playing with his bebop parrot — ICP 15 — which, Nik spun for me when were over to their crib for dinner, quite astounding that bird) 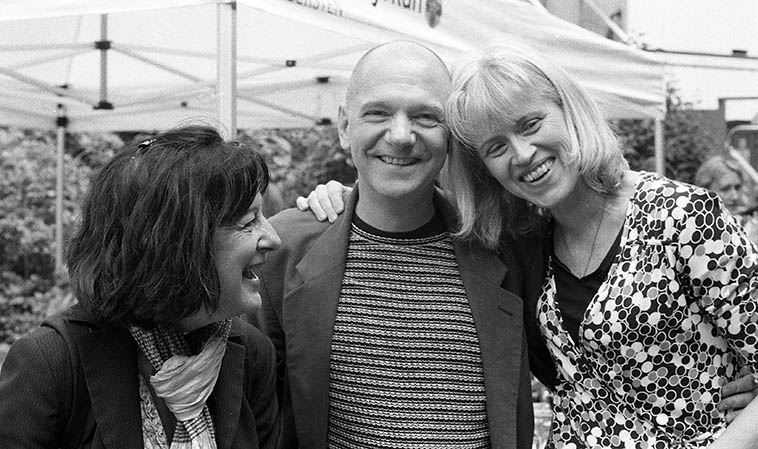 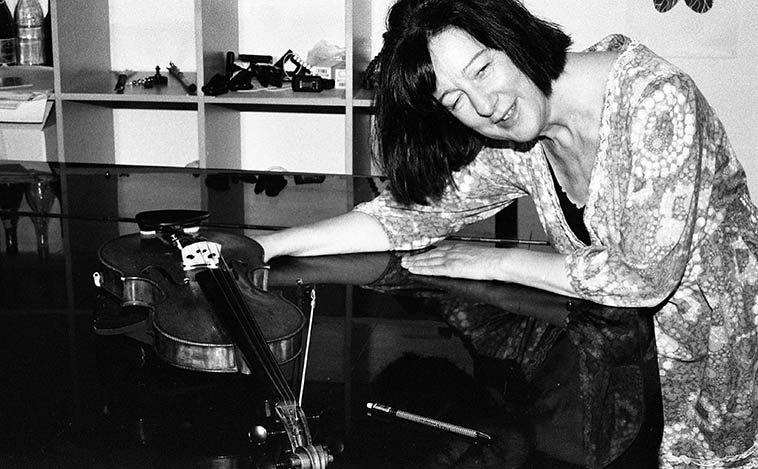 Eva Lindal mugging for the camera with her violin (1855 vintage) — Eva never holds back, even in rehearsals she goes for it, both times I heard her play Biber’s passacaglia on this trip it was so deep and intense it made the air swirl around her like a cyclone — photo by Mark Weber — May 30, 2o16 — (Heinrich Ignaz Franz von Biber — Bohemia/Austria 1644-1704) 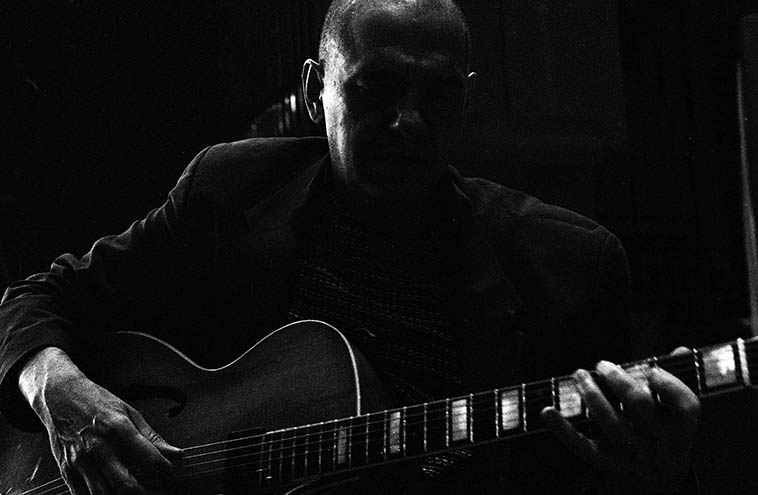 Every time I hear Andy Fite in a live setting I walk away thinking I just heard the greatest jazz guitarist alive on the planet — photo by Mark Weber May 29, 2o16 Stockholm — Andy on his 1950 Epiphone Broadway “and is far and away the greatest guitar I’ve ever played” — I was surprised to learn that Andy was born in LaJolla, California and spent the first six years of his life six blocks from the Pacific Ocean (his father was a physicist who played oboe, and his jobs were itinerant) — I’ve always thought of him as a product of Pittsburgh, “We landed at Pittsburgh airport on November 14, 1963” — He studied with the legendary Pittsburgh guitarist Joe Negri — Attended his first jam session at age 18 at the Zebra Room, run by drummer Spider Ronderelli — at our gig at Khimaira on the 30th, he and Niklas took off on a version of “Out of Nowhere” that was so deep that Eva and I decided to sit out — I sure hope to hear the recordings of this concert some day . . . . 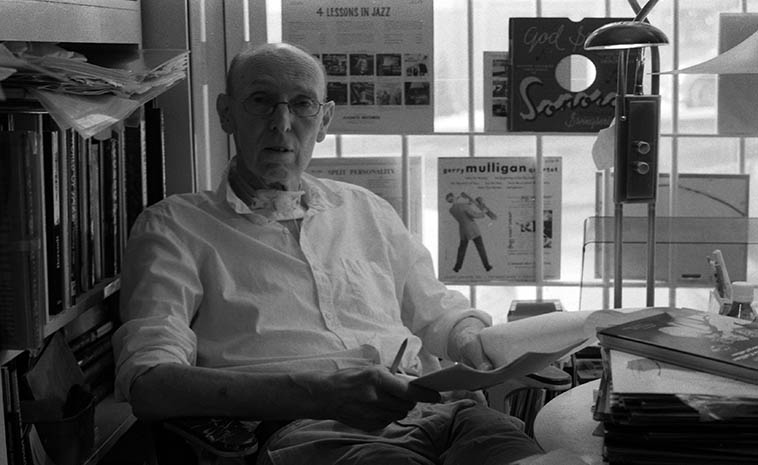 Harald Hult, proprietor of ANDRA jazz record shop, one of the greatest jazz records stores I’ve ever been in, wow, I spent a bundle, but couldn’t buy everything I wanted as traveling with vinyl is a hassle — photo by Mark Weber — June 1, 2o16 — Andra, Rodabergsgatan 9, Stockholm — Big thanks to Andy Fite for pointing me to this gem — This is one of those places you like to just hang out and with other collectors and shoot the breeze, compare notes (they taught me how to properly pronounce several musicians names, like Arne Domnerus which you pronounce with an accent uncharacteristically for Swedish on the second syllable, thus: Arnay DomNEARus — I’ve been playing his records on the radio but saying DOMnerus, which they all got a big laugh out of . . . .) 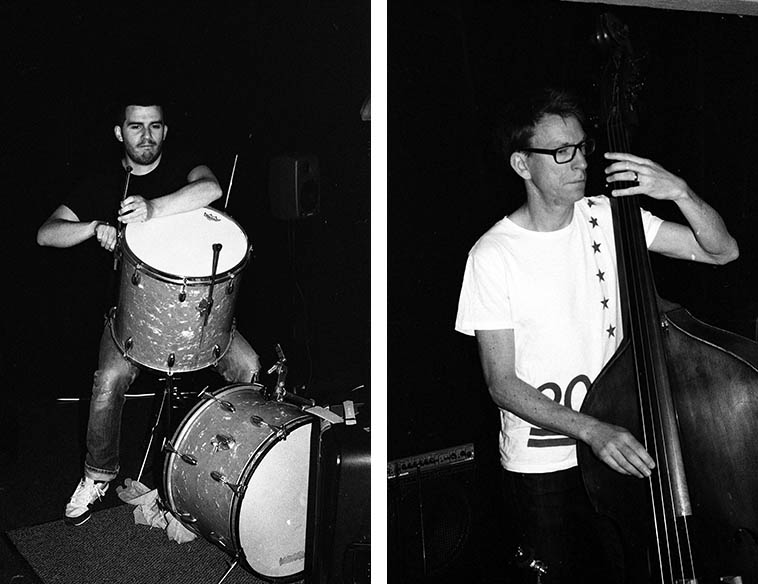 I read my poems with both bands this night during two sets — The Filip Augustson Trio with the remarkable Christopher Cantillo on drums; Eva Lindal, violin; and Filip on bass — Photos during rehearsal May 30, 2o16 by Mark Weber — Filip’s compositions remind me of the tradition began by pianist Jan Johansson (1931-1968) who worked extensively with all the modernist jazzers in Sweden but by 1960 started using Swedish folk songs as source material for his jazz improvisations. More on Filip in subsequent postings regarding Sweden and jazz. 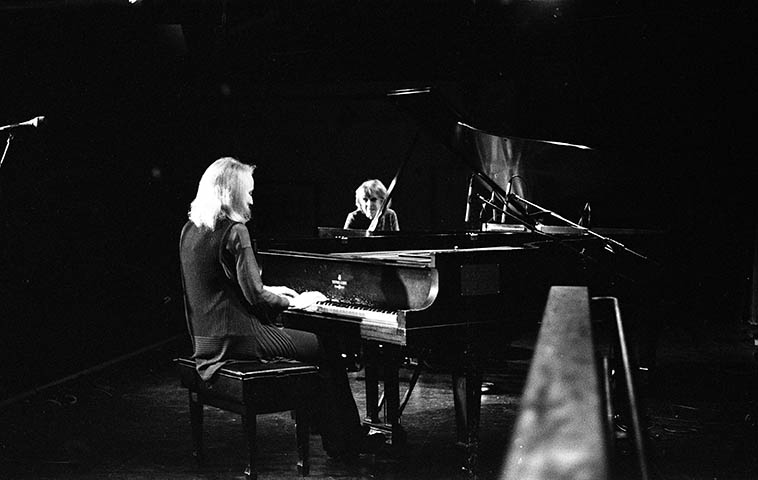 Kazzrie Jaxen & Virg Dzurinko two Steinways at Outpost Performance Space — May 6, 2o16 — photo by Mark Weber — This is preview of upcoming postings from the Interlace Concerts that happened just before we took flight to Iceland and Sweden, which was my first time ever visit to Europe and my gene pool.