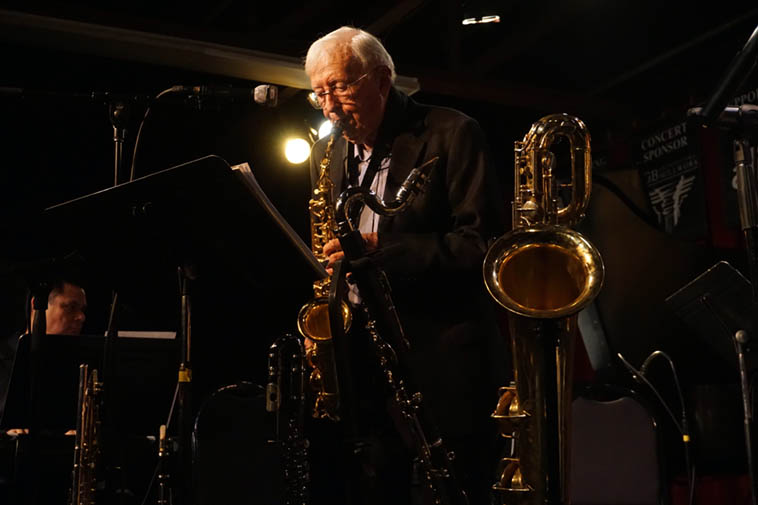 Arlen Asher —- multi-woodwinds, his “tubes” as he calls them —- Arlen was born and grew up a hundred miles north of Kansas City, remembers his earliest deep encounter with this music was a jazz radio show (1939) called Rhythm Rambles when he was ten and eleven, that ran 12 – 12:30 daily and he’d run home from school during lunchtime to catch it —- 1951 he was into the Army and says he luckily wound up in the Army band for 3 years which kept him out of Korea —- College after that, and broadcasting for an Iowa TV station (he interviewed Louis Armstrong!) and in 1958 he and Jo found themselves in Albuquerque where Arlen worked at KNME-TV & KOB-TV & KHFM radio —- Working in TV turned out to be a snake pit so he opened his own studio in 1965 to teach woodwind fundamentals & jazz improvisation — (in 1960 Arlen’s quartet opened for the Duke Ellington Orchestra @ the Civic Auditorium)——————photo by Mark Weber —- May 9, 2o19

When you play with so
many people you have to
have trust
That things will be okay
and, barring that
You have to be able to
play in yr own head
You have to hear the song
faraway, and play toward it
As if
the chords had strings on them
pulling you,
You can arpeggiate the notes, but
It’s as if
the saxophone is doing this on its own
All that you know
is that faraway melody
you heard long ago way back
in the woods and you don’t know
who was playing it
This was before you even knew
what a saxophone was
or even cared, then somehow
you had a clarinet in yr hands
and somebody showed you how to
set the reed, shadows & mist people, one
of them singing softly that same melody
from deep in the woods, a song
that has no name, naming it
would make it disappear,
evanescent,
and for
all these years that’s the melody
you’ve been hearing in yr head, the
one yr fingers
hope to play someday 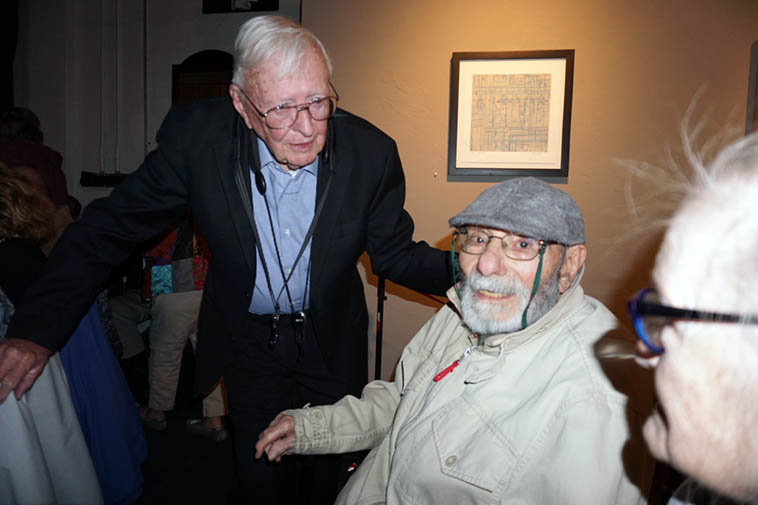 Arlen speaking with his old friend drummer Nick Luchetti — Everybody in Albuquerque comes from some place else —- the United States spent the 20th century in migration —- Even the Navajo arrived in New Mexico in the 1400s —- Only the pueblo peoples are indigenous, having migrated here 13,000 years ago —– The population of Albuquerque is now 558,545 (metropolitan: 915,927)—- When Janet & I moved here 28 years ago the city was about 390,000 —- When Lester Young lived here 1929-1930 it was 26,500 —- Nick Luchetti grew up in Pennsylvania (born circa 1930) at age 20 joined the Air Force, wound up at Walker AFB Roswell, New Mexico —- After mustering out he was off to University of New Mexico, then to Santa Monica City College, and on to UCLA, graduating in 1960 whereupon he returned to Albuquerque and has been here ever since as a drum teacher, performer, and opened the renowned Luchetti Music Store in 1965 (closed Sept 2001) —- photo by Mark Weber – May 9, 2o19 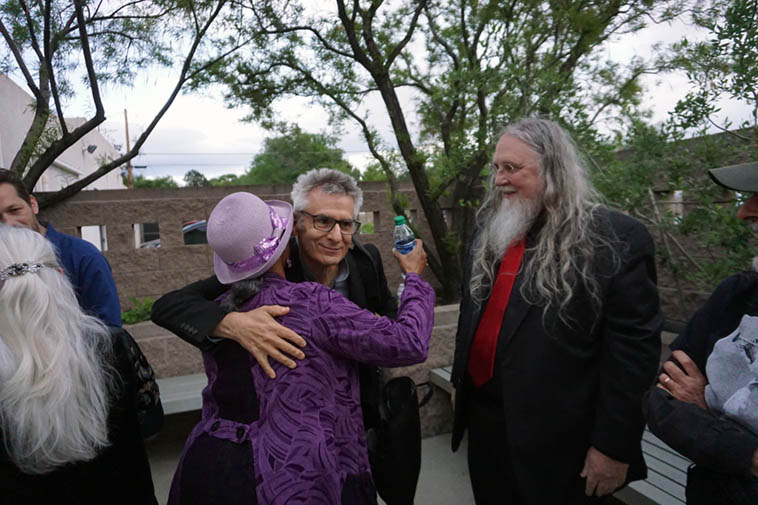 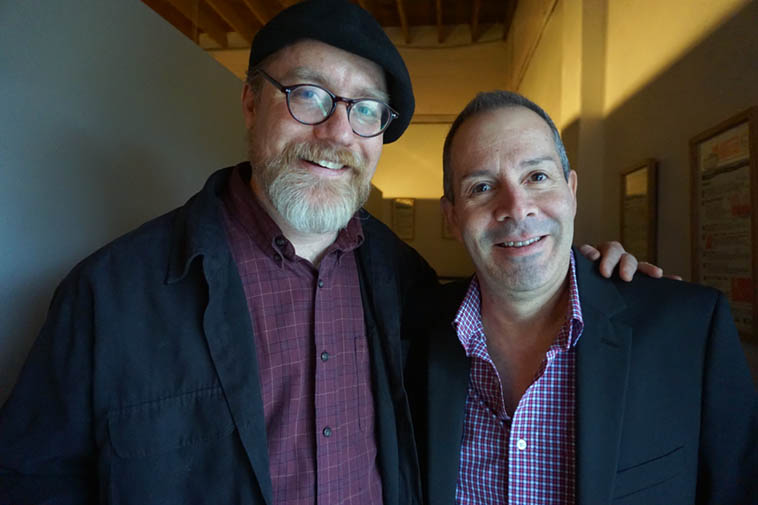 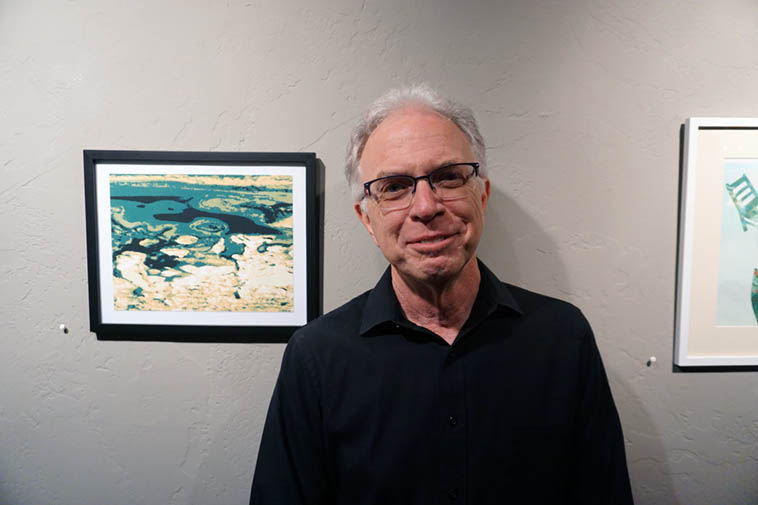 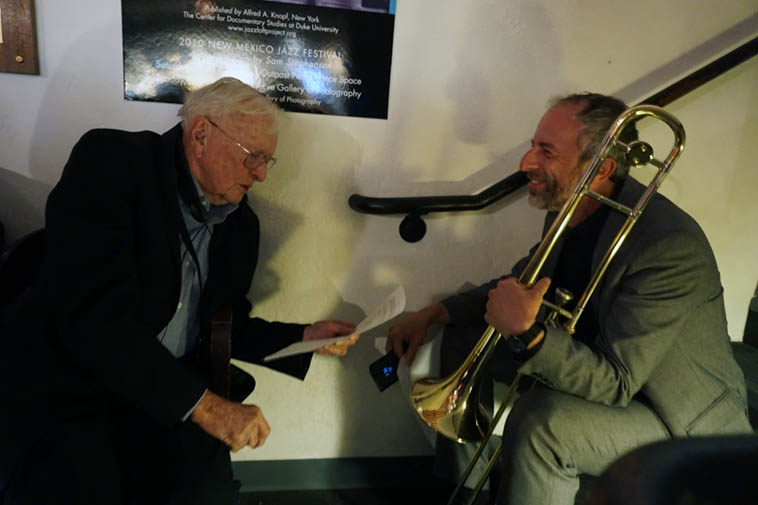 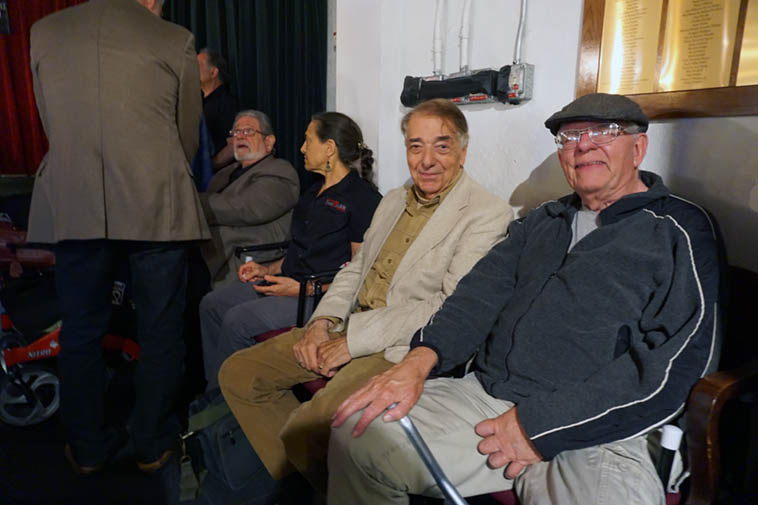 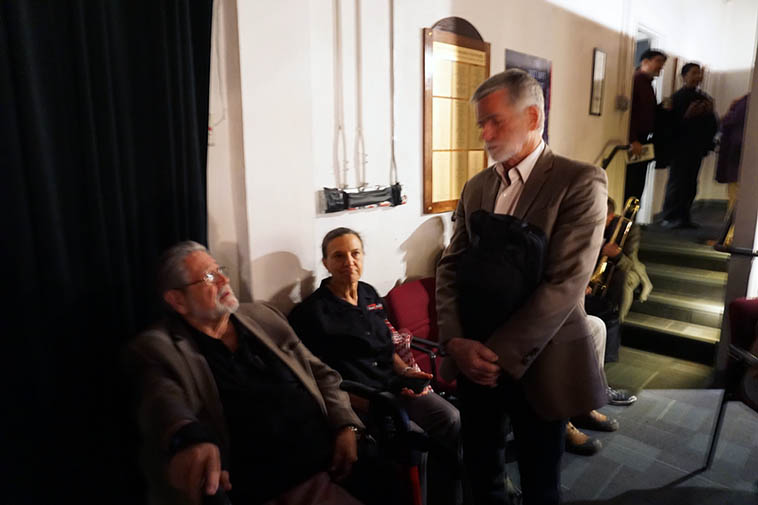 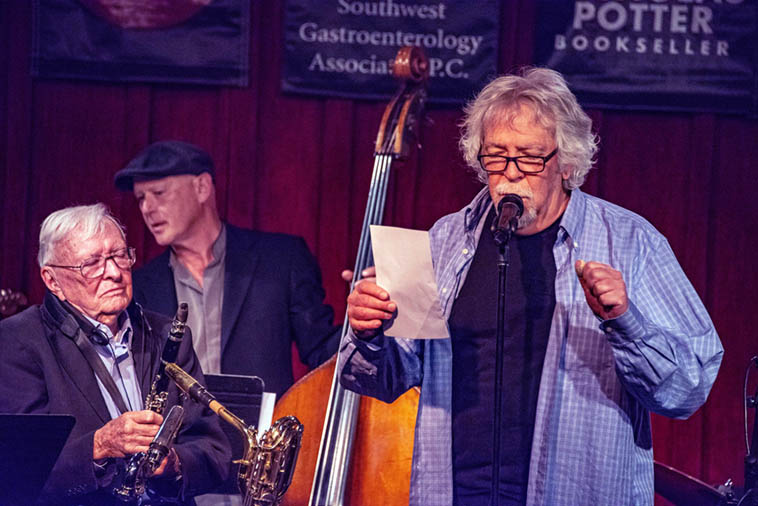 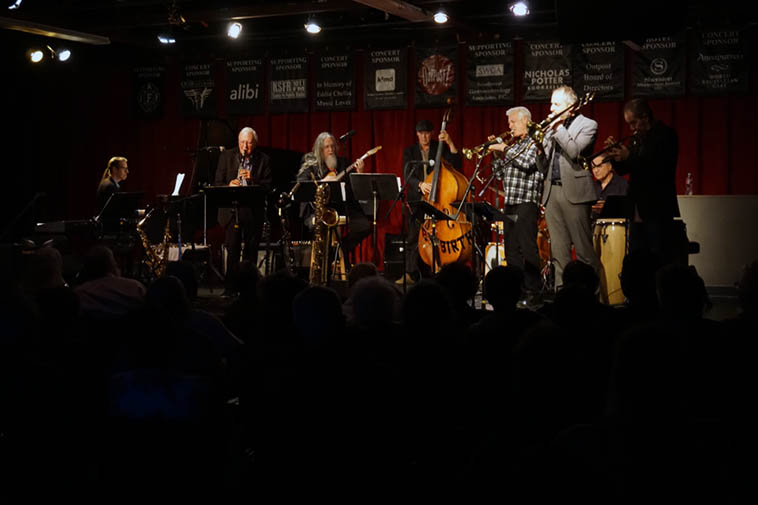 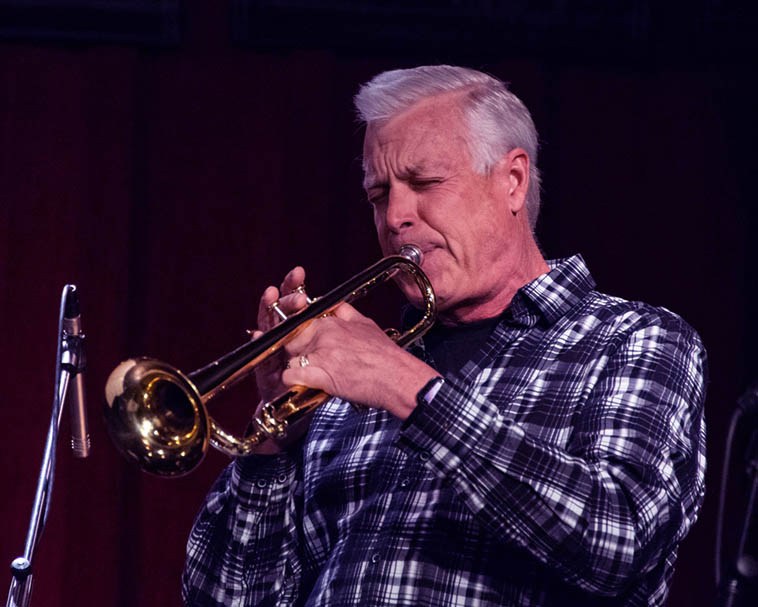 Kent Erickson leading the charge on “I Found a New Baby” —- May 9, 2o19 Outpost Performance Space — photo by Roch Doran —- Arlen told the audience that he wanted to start with a Dixieland number as that’s where he started in this life of jazz, playing the little joints around northern Missouri when he was 13 and 14. 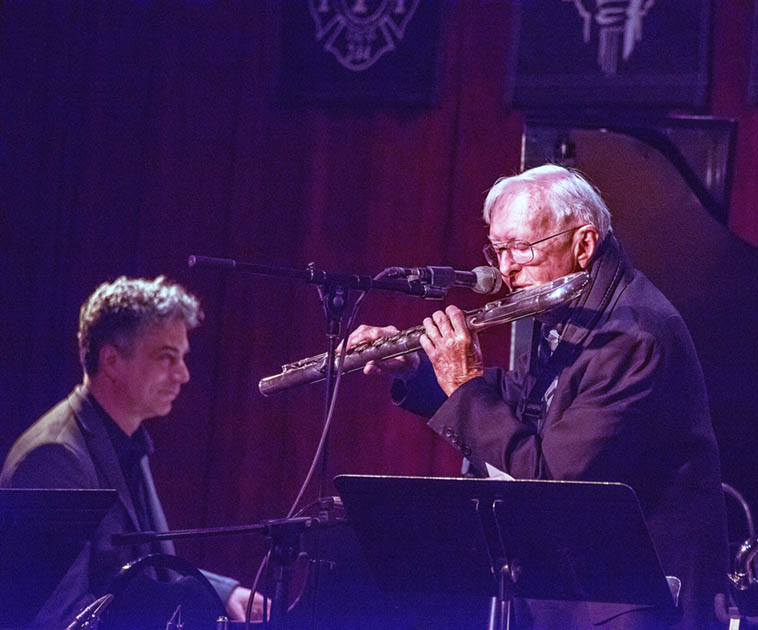 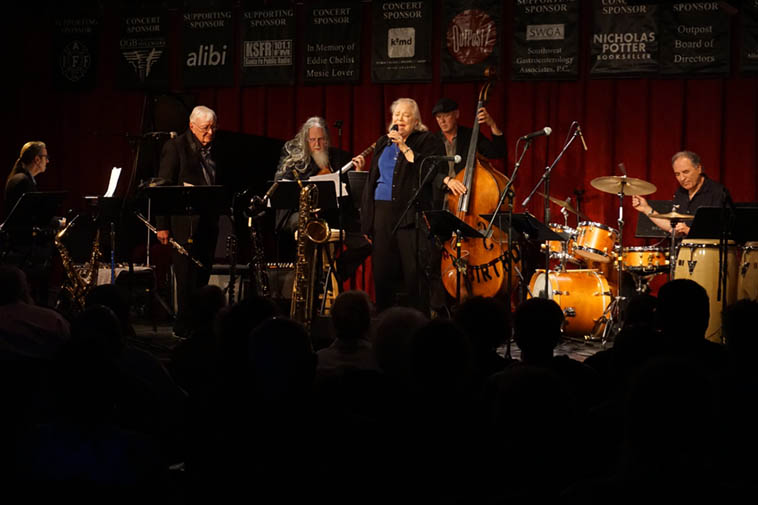 Judy Christopher “Night and Day” —- photo by MW —- This night at the Outpost Performance Space was a jam session party for Arlen Asher’s 90th birthday (b. 7 May 1929, Missouri) —- total of about 35 musicians performed with Arlen, with many others in the packed house. 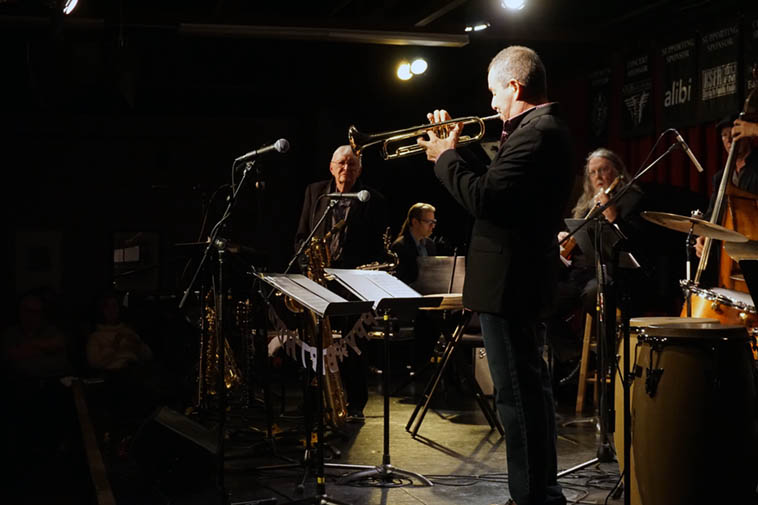 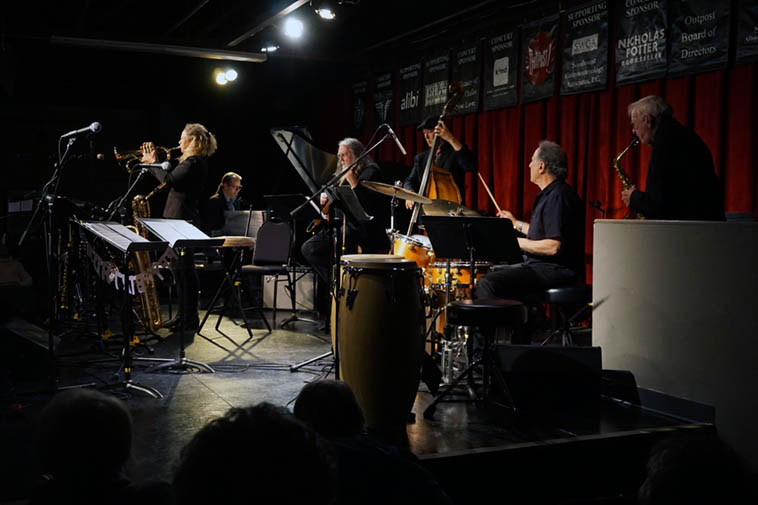 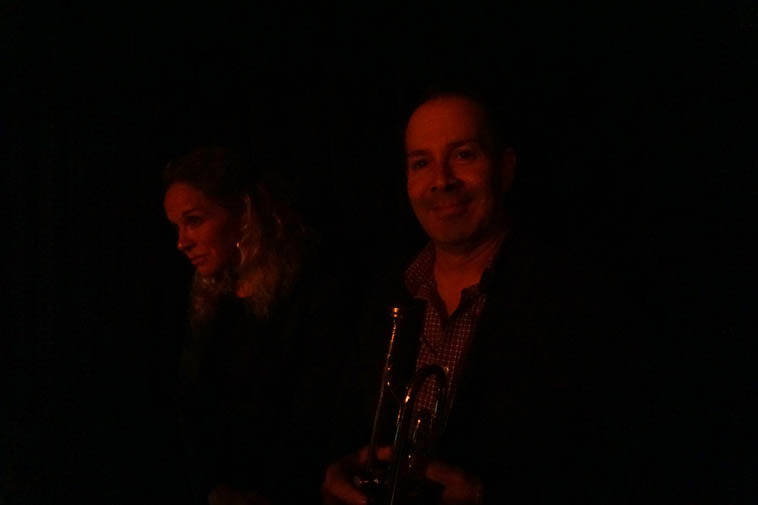 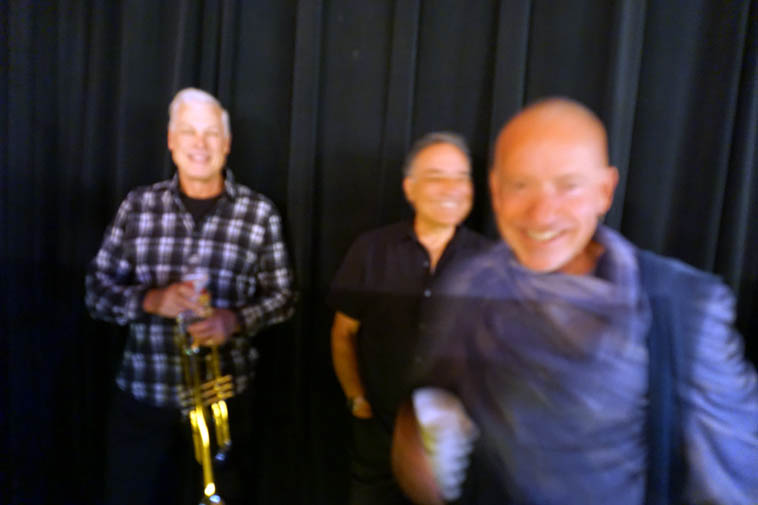 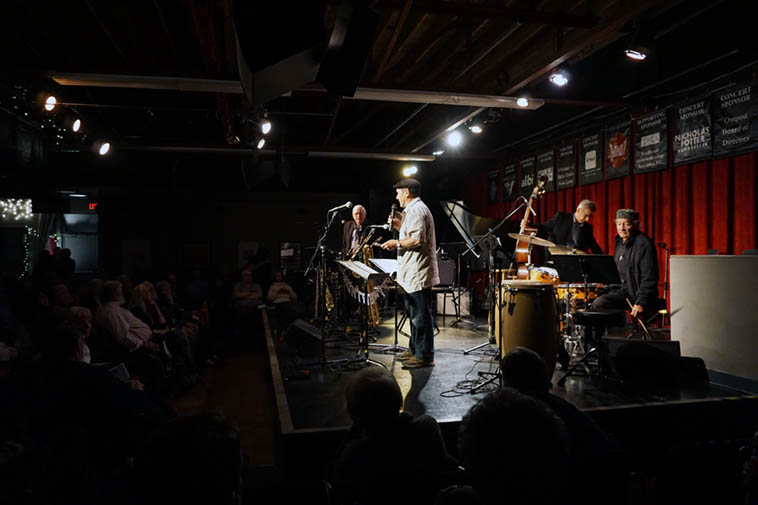 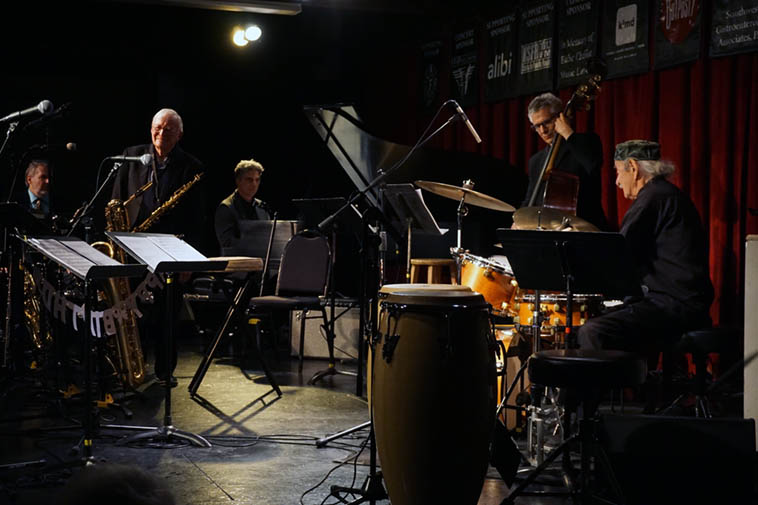 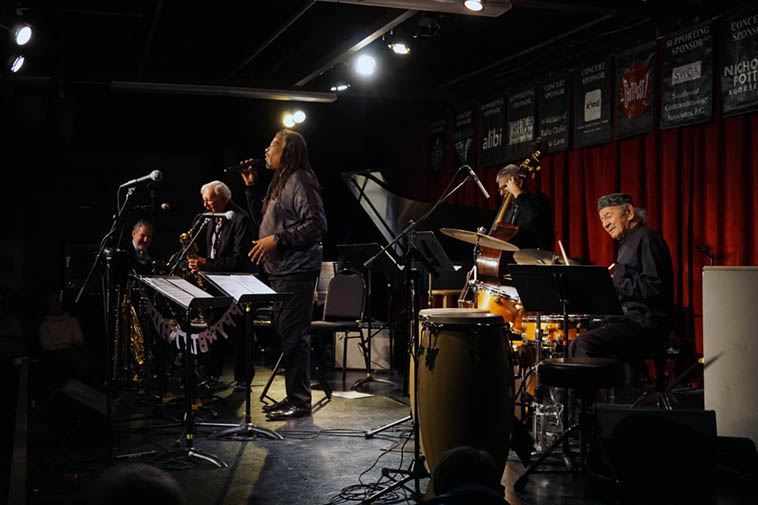 Michael Herndon took “My Funny Valentine” to the moon, and after he plumbed every possible meaning from the words he started speaking in tongues, he was gone —- May 9, 2o19 —- photo by Mark Weber 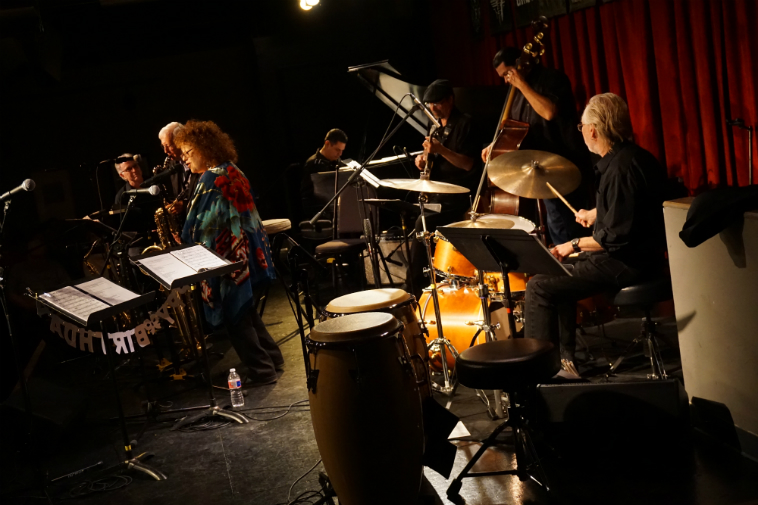 I wish we had a recording of Arlen playing “Scrapple from the Apple” while Patti Littlefield sings “Honeysuckle Rose” —- They’ve been doing it around town for half dozen years now so it’s ready to be boxed and gift wrapped —- One wonders what Bird’s thought processes were (as if we’d understand) when he cooked up Scrapple out of boiling down Honeysuckle —- Sid Fendley and Steve Figueroa traded places at the pianos, with Dimi DiSanti (guitar), Milo (bass), Mark Clark (drums) —- photo by Mark Weber 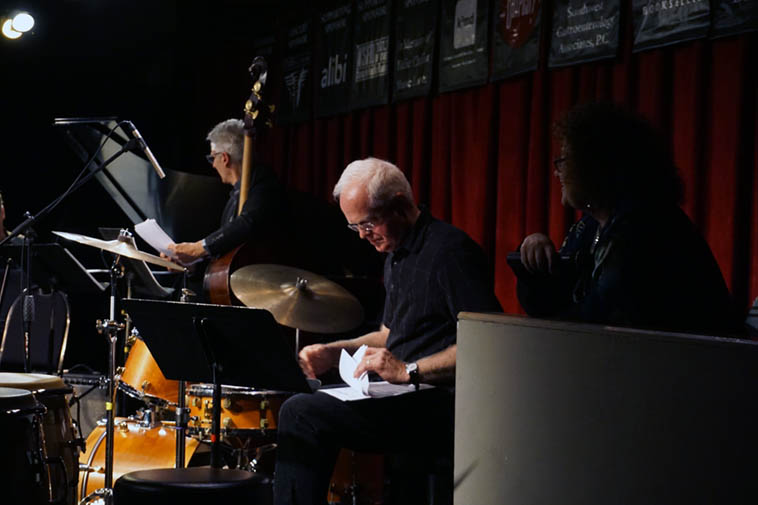 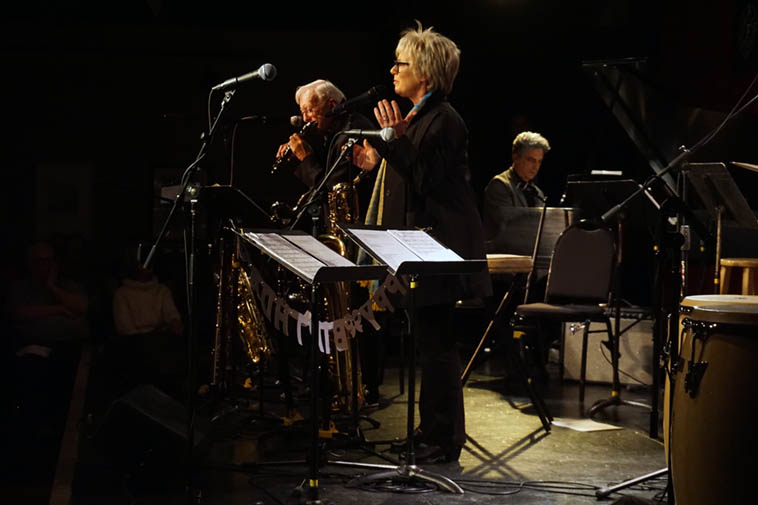 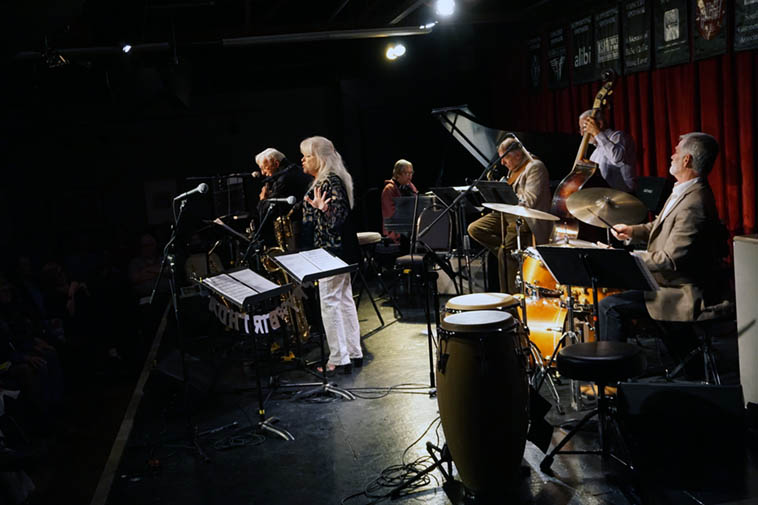 Set 3, band 2:  “A Sleeping Bee” Allison Davis (she reminded me later that Truman Capote wrote the lyrics) —- Arlen’s love of this music is fierce and expressed in his lifelong devotion to it (I mean “fierce” in the old Anglo-Saxon sense —– I don’t mean he’s aggressive, which would never suit Arlen) —- Pat Rhoades piano solo on the following tune “What is this Thing called Love” was a high point for me, he was into it before I realized it was a solo, uncanny how his impressionistic chords floated above the bar lines, and short single lines in the right hand were there to push the chords even further out, while Cal Haines kept the time crisp and crackling, and there’s Rick Fairbanks on bass, who was the main bass player around town when we got here in 1991, and Michael Anthony on guitar (who migrated here from LA in 1980) —- May 9, 2o19 photo by MW 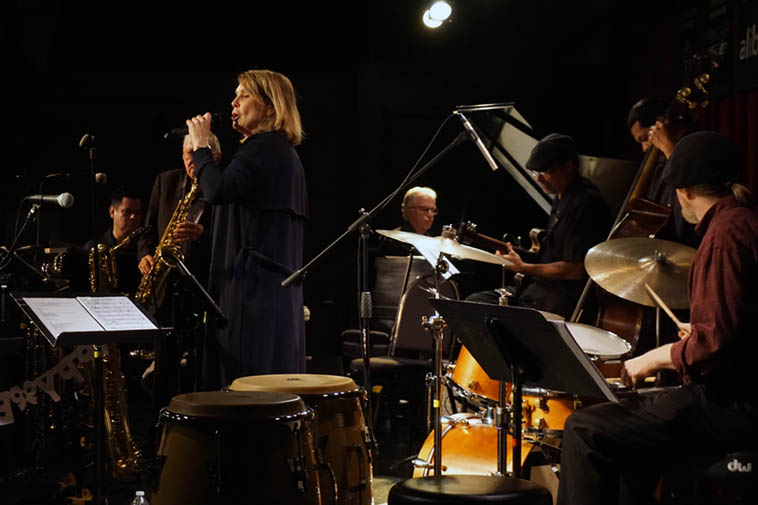 Set 4, band 1: the firecracker Wendy Beach singing “Yardbird Suite” in a set that had three (3!) Bird tunes (I think Wendy came from Montana in the mid-80s), Steve Figueroa (elec-piano), Arlen (alto), Sid Fendley (Steinway), Milo Jaramilo (bass) (from Isleta Pueblo, which means his bloodlines go way back in this New Mexico), John Bartlit (drums) ——————photo by MW —- (Steve Figueroa’s mother Mary is Laguna Pueblo and a jazz historian in her own right) 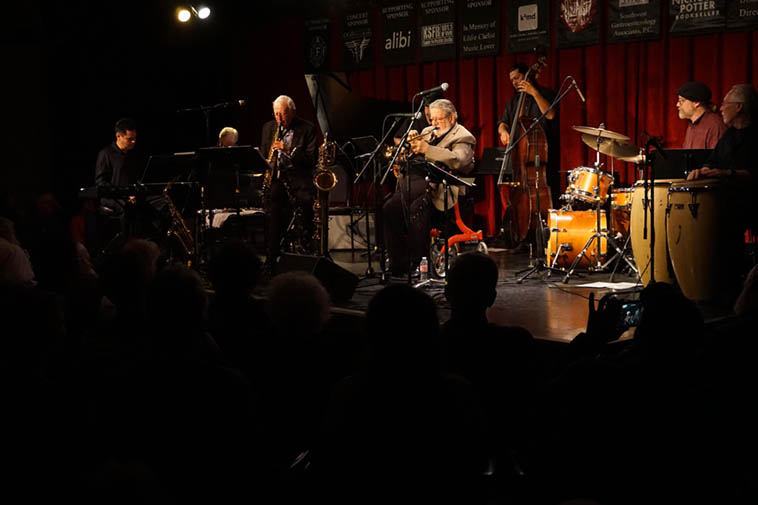 “Caravan” with Bobby Shew (trumpet) and Arlen Asher (soprano) out front w/ Steve, Sid, Dimi, Milo, and John Barlit (drumset) and Mark Clark (congas) —- Arlen told the story how he first met a teenage Bobby Shew at the Sunset Inn out on west Central when he first got to town in 1958 when Shew sat in with his quartet one night —- Bobby says how he remembers that Arlen was so surprised that I could even play —- (Bobby joined the Air Force in 1960 —- He and Lisa returned to Albuquerque August 6, 2006) —- photo by MW —— After this tune they ended the evening with “Somewhere Over the Rainbow” which was pure poetry. 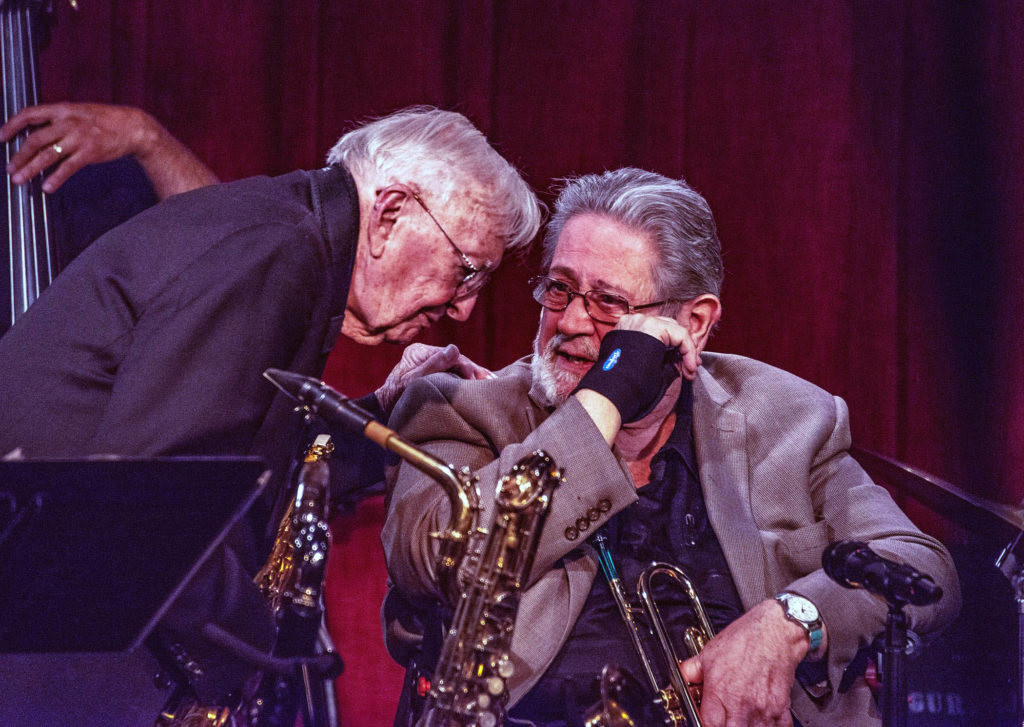