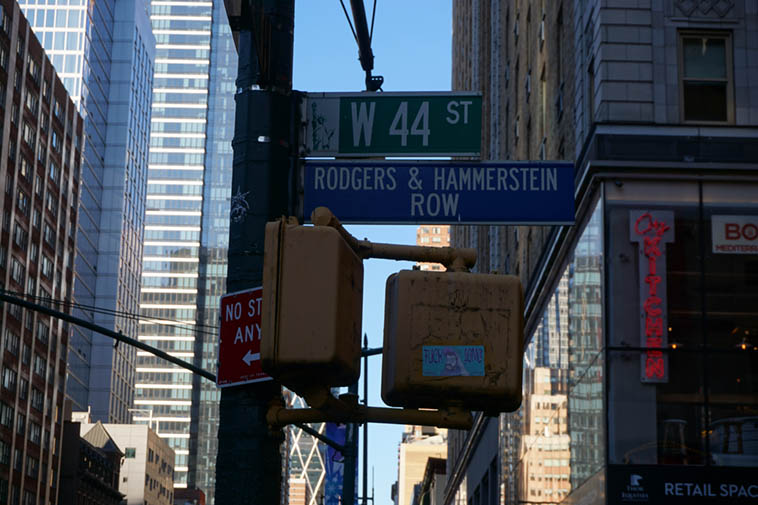 “Au contraire,” said our most contrary wino, pretending to be French, leaning against the wall in the alley of time, then, in Latin, “cogito, ergo sum,” as if those of us who passed him by, pretending he didn’t exist, didn’t see him, who knows, maybe he was French, and looking for a way back across the ocean? I’ve met my quota in this life of talk with winos, it’s always an uneven playing field: they’re full of wine and you’re not —- There’s an indefatigable surety & confidence when you’re full of wine, it must be nice, pretending not to hear him, cogito, ergo sum [I think, therefore I exist], I continued on foot heading to the radio station stuck in my own reality with a briefcase full of jazz records. 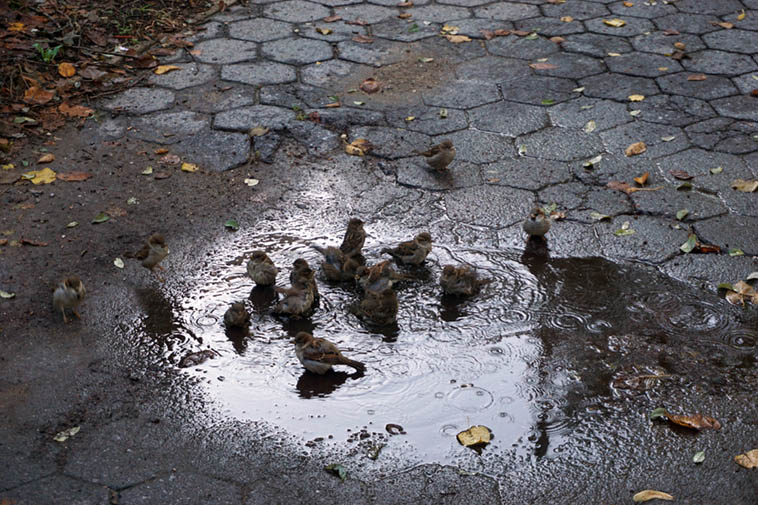 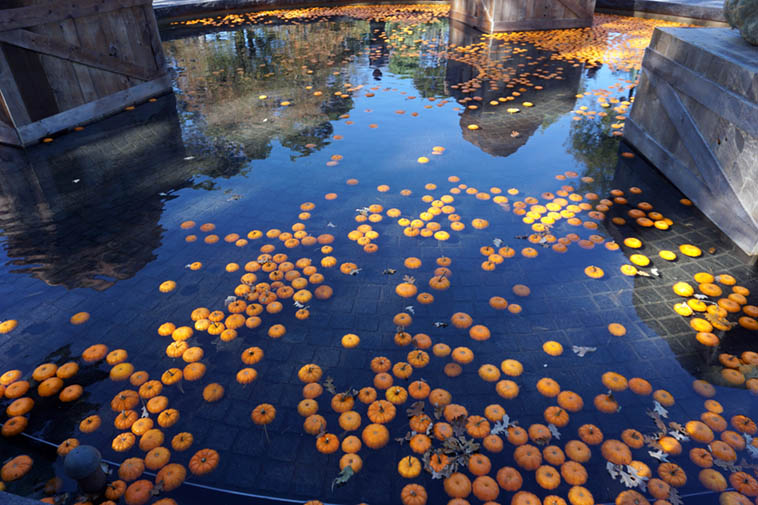 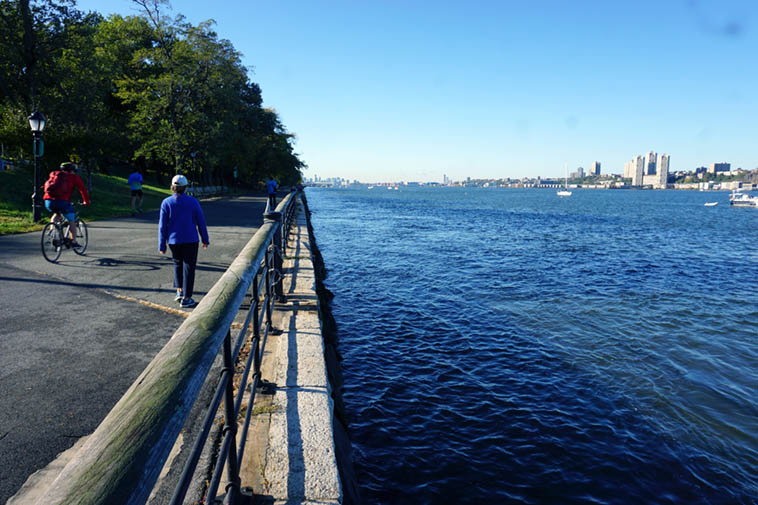 Janet walking along the quay —- October 23, 2o19 10:24am (my wife is an exercise type, so I was tagging along) —- Hudson River near 113th Street looking south from Manhattan – photo by MW 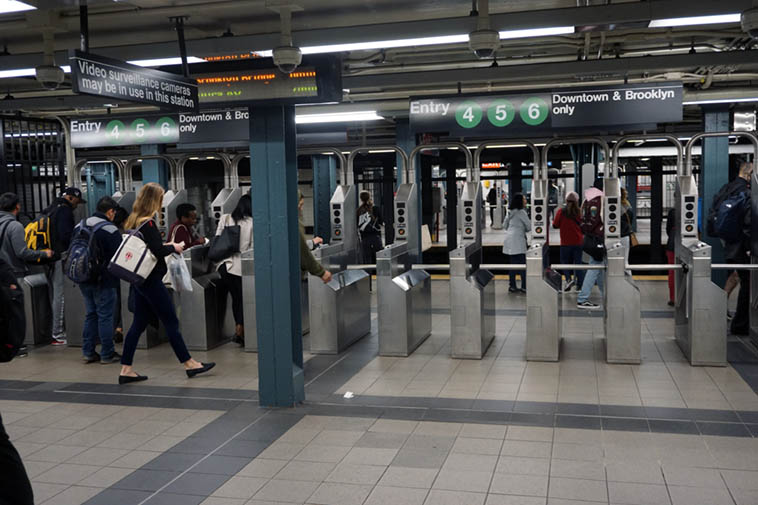 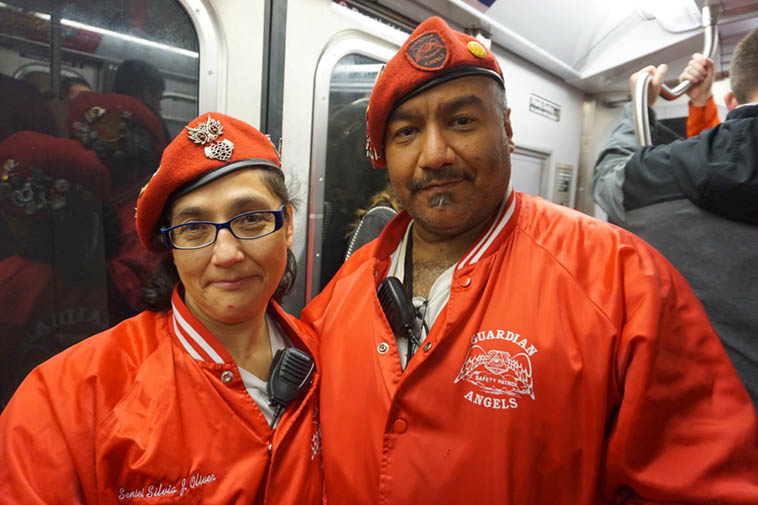 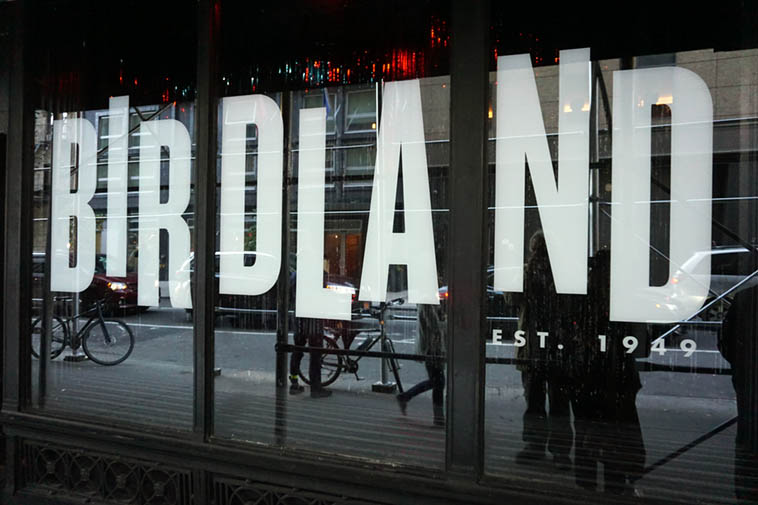 315 W. 44th Street —- We were in town October 19 – 27th — Whenever possible I try to always catch the matinee of David Ostwald’s Louis Armstrong Eternity band, now in it’s 20th year at Birdland, this night was packed to the rafters, we had to stand in a separate line for non-ticket holders (hence the photo) and we were lucky to get in, it was jazz scholar Dan Morgenstern’s birthday celebration and everybody was there: Daryl Sherman, Catherine Russell, author Janice Greenberg, Loren Schoenberg, Joe Temperley’s widow Laurie, author Ricky Riccardi, and Lew Tabackin sat in on tenor! —- October 23, 2o19 – photo by Mark Weber 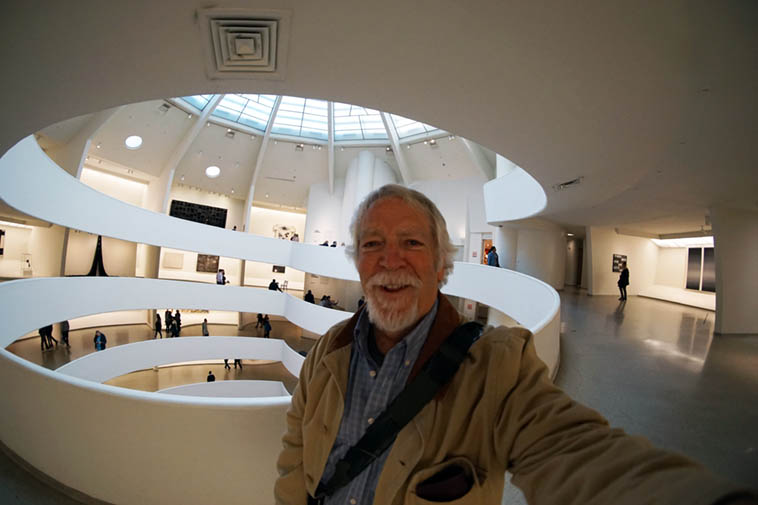 Self-portrait inside the Guggenheim with wide-angle lens at age 66 – October 23, 2o19 NYC 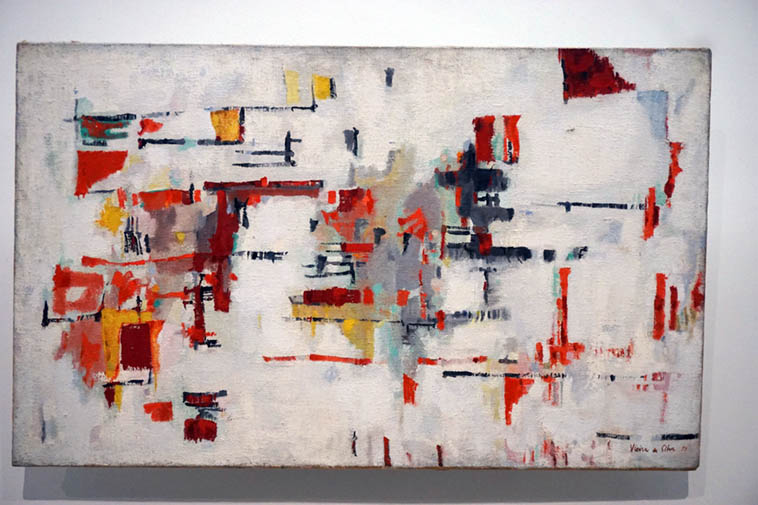 What a titanic talent she had: Maria Helena Viera da Silva (1908-1992) “Untitled”(1953) oil on burlap – Guggenheim exhibit Artistic License: Six Takes on the Guggenheim Collection (six artists chose their favorite works out of the vaults) 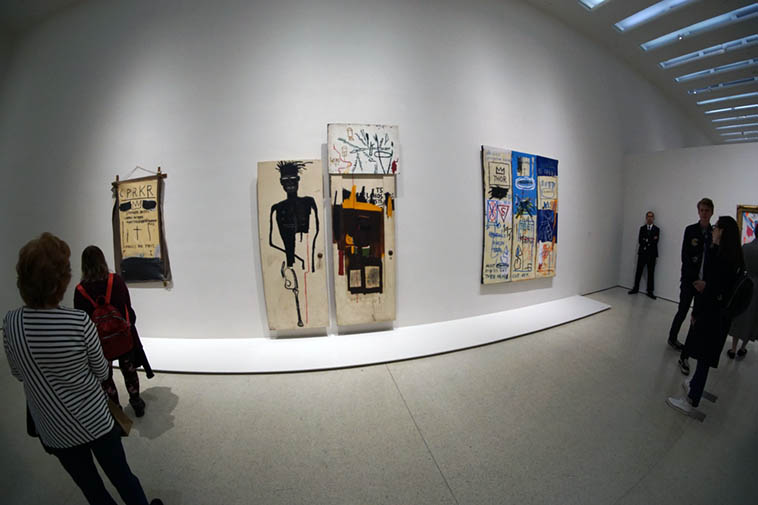 Jean-Michel Basquiat was certainly channeling something very heavy (he called it anger, and you can see that, and the Reagan years and a bankrupt city, staring over the edge into oblivion, why not spray paint the subways, something has got to happen) —- I sure hope Sheila Jordan gets a chance to see this exhibit: these separate paintings hung as a tryptic: “CPRKR”(1982) & “Self-Portrait”(1983) & “Charles the First”(1982) his paean to Charlie Parker —- Guggenheim Museum exhibit Basquiat’s Defacement —- Sheila will be quite moved, she’s all over the place these days, we had to reschedule our dinner for another time, when I telephoned she had just returned from Estonia & Austria and was home in Chelsea doing her laundry and leaving for gigs in Toronto the next day, I told her I went to Dan Morgenstern’s 90th birthday party and she exuberantly declared, “He’s 90 and I’m going to be 91!” Like Jay Clayton told me, “Sheila’s indestructible!” Wasn’t it in Estonia a few years back that there was found a person 118 years old? —– photo by MW 23oct2o19 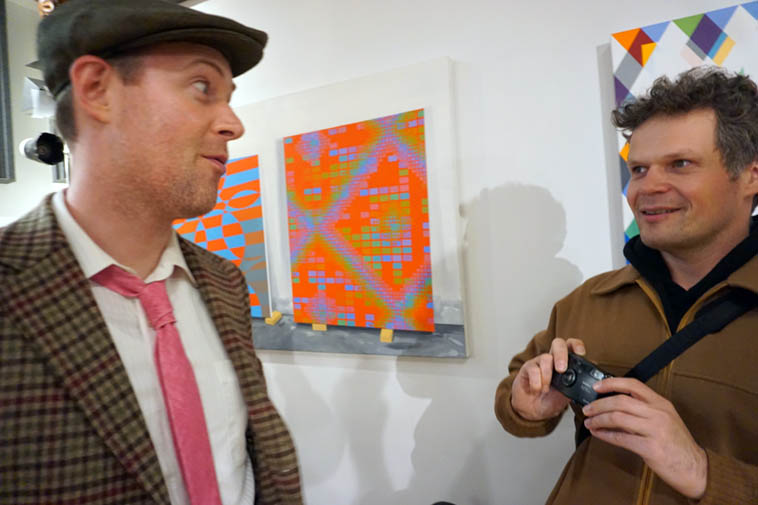 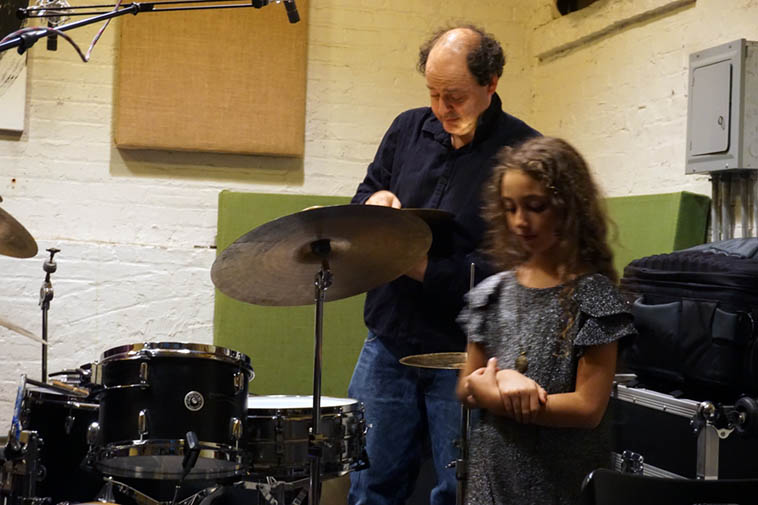 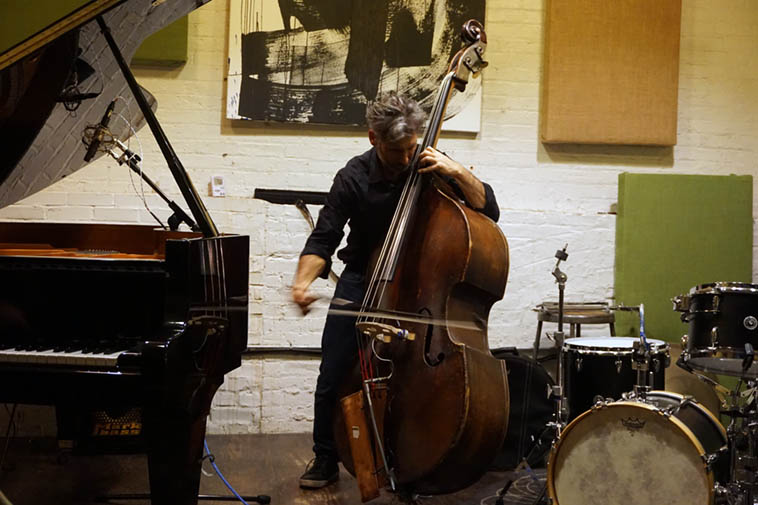 Adam Lane in duet with Carol Liebowitz at I-Beam, Brooklyn —- October 24, 2o19 – photo by Mark Weber —- I told Adam that his bass is giving me déjà vu, how old is it? Something like one hundred years, bought it out in Los Angeles, it used to be Monty Budwig’s —- I told Adam that I heard that bass back in the 70s on the Coast 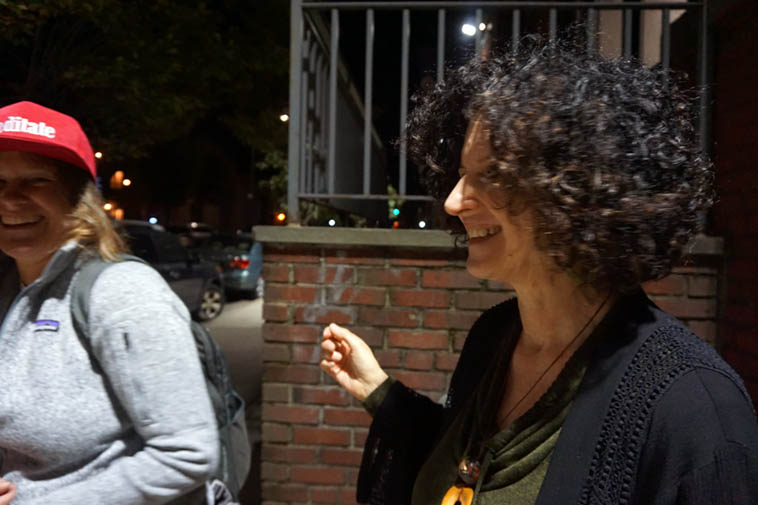 Burdie (Michele Burdiac) ‘s hat says Meditate —- We’re outside I-Beam in Brooklyn, prior to Carol Liebowitz’s (pictured) concert —- Burdie is a yoga teacher so I was showing her Vasisthasana as best I could as it’s a pose I should no longer be doing, too hard on my shoulders, she lives across the hall from Connie’s studio in Williamsburg —- photo by Mark Weber – October 24, 2o19 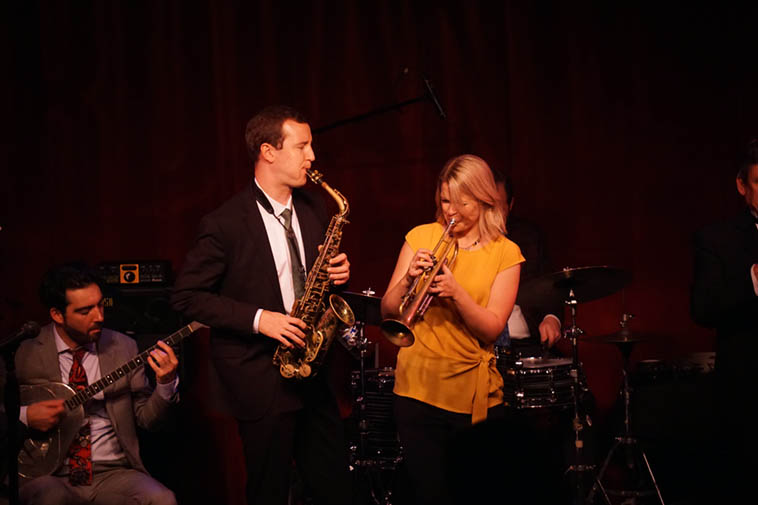 This shot reminds me that I need to look into whatever CDs this trumpeter might have out there, new to me, she was tremendous: Bria Skonberg(trumpet), and Will Anderson(alto), Gerrard Angle(banjo) w/ David Ostwald’s Louis Armstrong Eternity Band —- October 23, 2o19 —- photo by Mark Weber 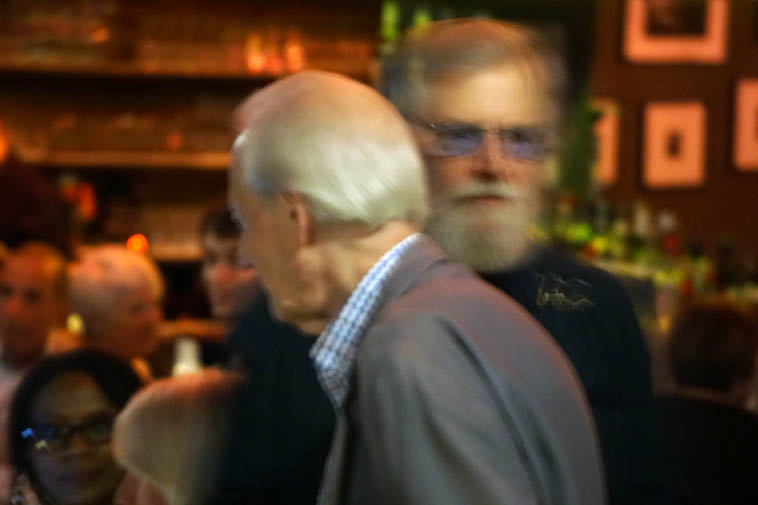 As I’ve said before, that’s one of the drawbacks of digital-thinking cameras, is that you can’t just point & shoot, the damn thing wants to think a minute before it fires, I’m trying to break the habit, the upshot being you get these blurry photos, which I actually like, up to a point —- That’s Dan Morgenstern and Lew Tabackin – October 23, 2o19 —- photo by MW 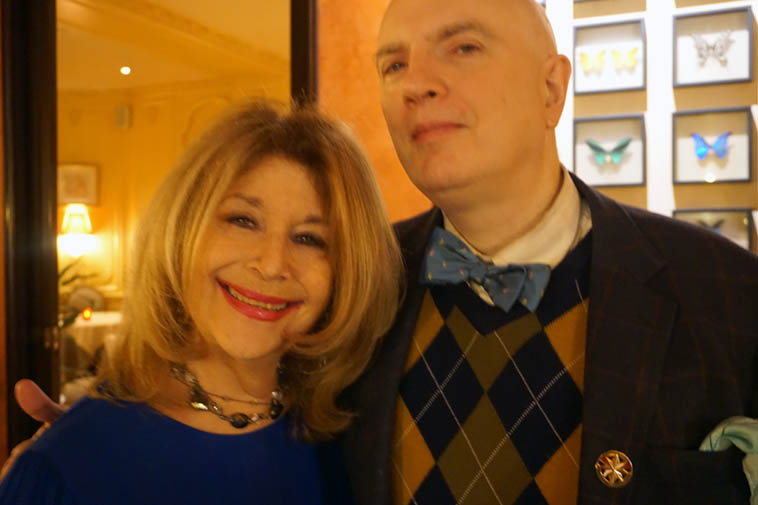 And on our last night in town we caught Daryl Sherman singing & playing piano in the Arabelle Lounge, Plaza Athenee Hotel, 37 E. 64th Street right off Madison Avenue, and author Will Friedwald dropped in! Such is Manhattan —- October 26, 2o19 —- photo by Mark Weber —- Daryl is a frequent guest on the Thursday radio show because she knows so much about the American songbook and is such a beautiful person 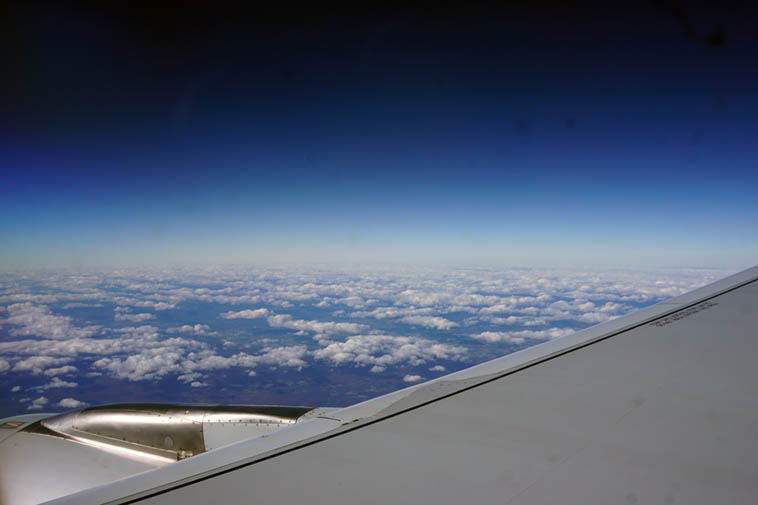 Somewhere over the middle of the U.S. heading west back to Albuquerque – October 27, 2o19 – photo by MW