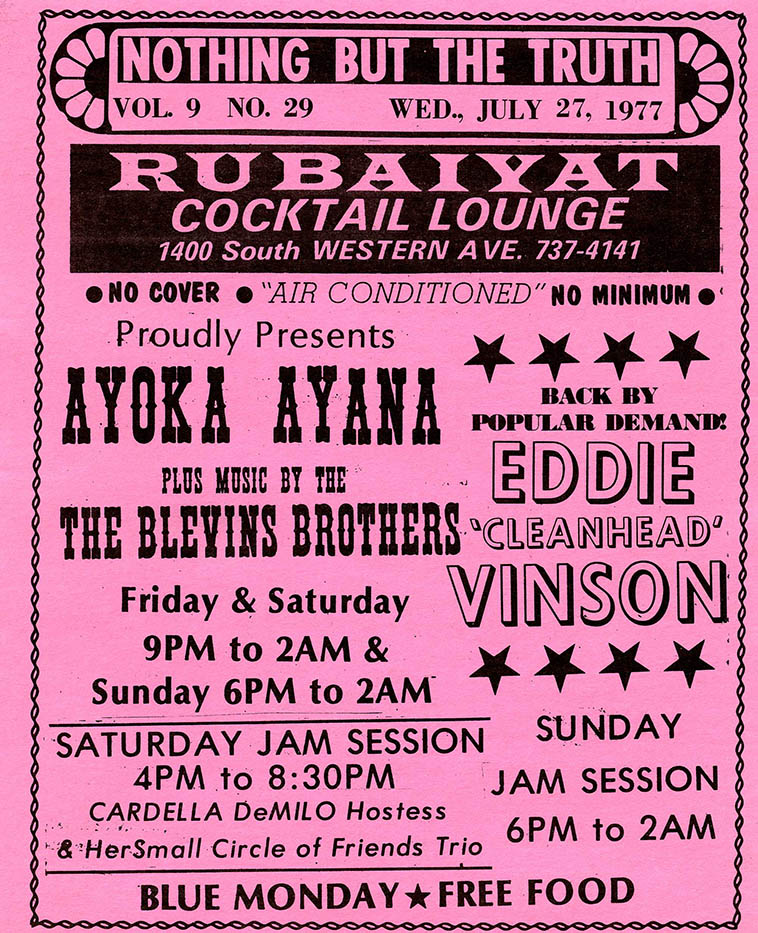 I grew up in the vast suburbs of Los Angeles, on the east side of that metropolis, mostly dependent on radio to keep me hooked in —- In those nascent days of the late 60s early 70s you’d find the concert listings in the Sunday Calendar section of the LATIMES, and I’d be astounded to read that Art Blakey or Dexter Gordon or Milt Jackson were appearing at places called The Lighthouse, or Rumsey’s, or Parisian Room —- These were like mythological beings, YOU COULD ACTUALLY GO SEE THEM?

So, that was a watershed moment. Up till then I’d been frequenting the Whisky-A-Go-Go and the Troubadour and wherever else Rock was being staged, like the beloved Swing Auditorium in San Bernardino, or the Pauley Pavilion at UCLA. All over SoCal. Sixties rock was pervasive. I still love those bands: Grateful Dead, the Airplane, Quicksilver, the Doors, Hot Tuna, Mike Bloomfield, Allman Brothers, they were the ones that led me to jazz.

One thing that struck me about jazz was how intimate it was. You could hear it played in what were essentially bars with music. You could actually watch Max Roach’s footwork, or get freaked out the first time you saw up close how big Dizzy’s cheeks could puff out, or stroll up behind Cecil Taylor at the Keystone (officially “Keystone Korners” because there already was a Keystone across the Bay over in Berkeley, but we all called it the Keystone) just to see what exactly his intangible fingers were doing on that piano. The last Rock concert I ever attended (besides Pat Metheny last week, hahaha) was Grateful Dead, Santa Barbara 1974 where the cops were searching everyone at the gate (arresting some of us) and we all packed onto a football field in the broad daylight and cooked like turnips without nothing to drink, while watching stage hands and performers stroll around with frosty beers in their regal privileged magisterial separateness from us sunbaked serfs sitting in the dirt sweating. About as much fun as a poke in the eye. (We were young so it was sorta tolerable.) And let’s not even talk about disentangling your hippiemobile from parking when it was all over. Quite a bit different from having Blue Mitchell buy you a beer at Dontes (I’d given him some 8x10s). Or having a hamburger & Pepsi with Sheila Jordan on Eighth Avenue.

That was the absolute juncture for me. I’d already been catching jazz around town, but in 1974 I went headlong into it. Call me arrogant but I don’t do well in crowds. Like the time my high school buddy Bill Miller and I were seeing the Dead at the Long Beach Arena, Dec.1972 (geezus, you can look these things up nowadays) and the kid next to us puked all over the floor and it stunk to high hell and we had to get out of there. (Bill was a very proper kind of guy, who never wore Levis, went to England that year and came back speaking like the Regency —- an Asian-American with pretensions of the upper classes, a good guy, I miss him, wherever he is.)

In jazz you set up your own instruments (unless you’re Buddy Rich :)  You can watch Ed Blackwell take his drumset down at the end of the night. Or carry Billy Hart’s cymbal bag for him. Or have a galactical chat with Sun Ra.

So, where was this jazz? If you were lucky enough to live in or near one of the main jazz cities: LA Detroit NYC Philadelphia Chicago New Orleans Dallas/Ft Worth Denver Frisco, then you were set. Otherwise, you have to search around, look under rocks, around corners, down alleys, it’s there, sometimes in plain sight. Best heard at your local tavern, where it’s real. 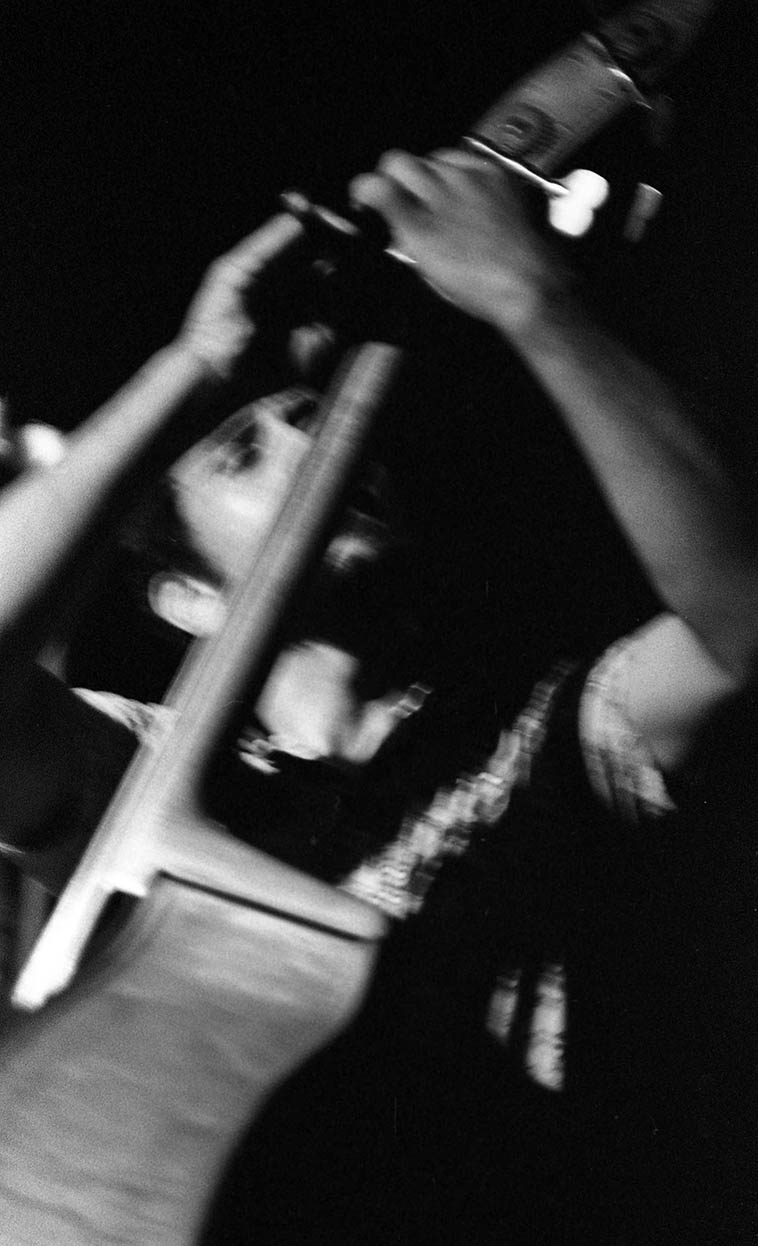 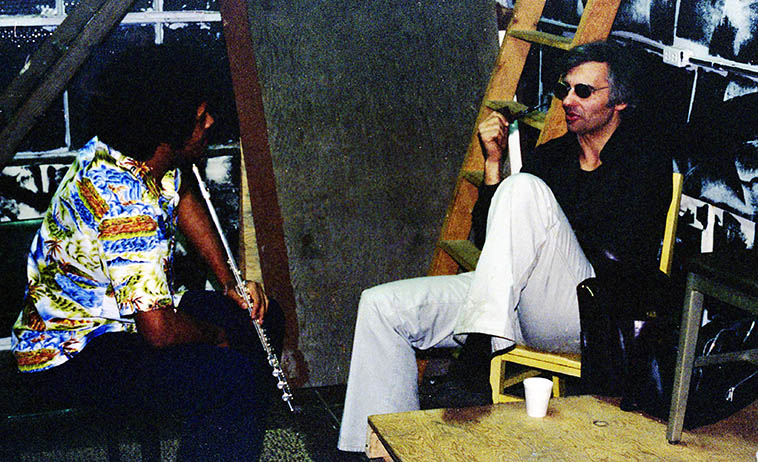 Fond memories of tooling down the night freeways, James Newton and I singing along at the top of our lungs with June Tyson in my blue Volks bug with beers “The sound of joy is enlightenment!” on the Sun Ra classic (Fondation Maeght, 1970, still one of my favorites). We lived on the same side of town and would be coming home from the Sunday jam session at Bobby Bradford’s club The Little Big Horn —- Photo is James with Paul Bley visiting LA, who was brought by the Little Big Horn by Vinny Golia —- December 19, 1976 photo by MW 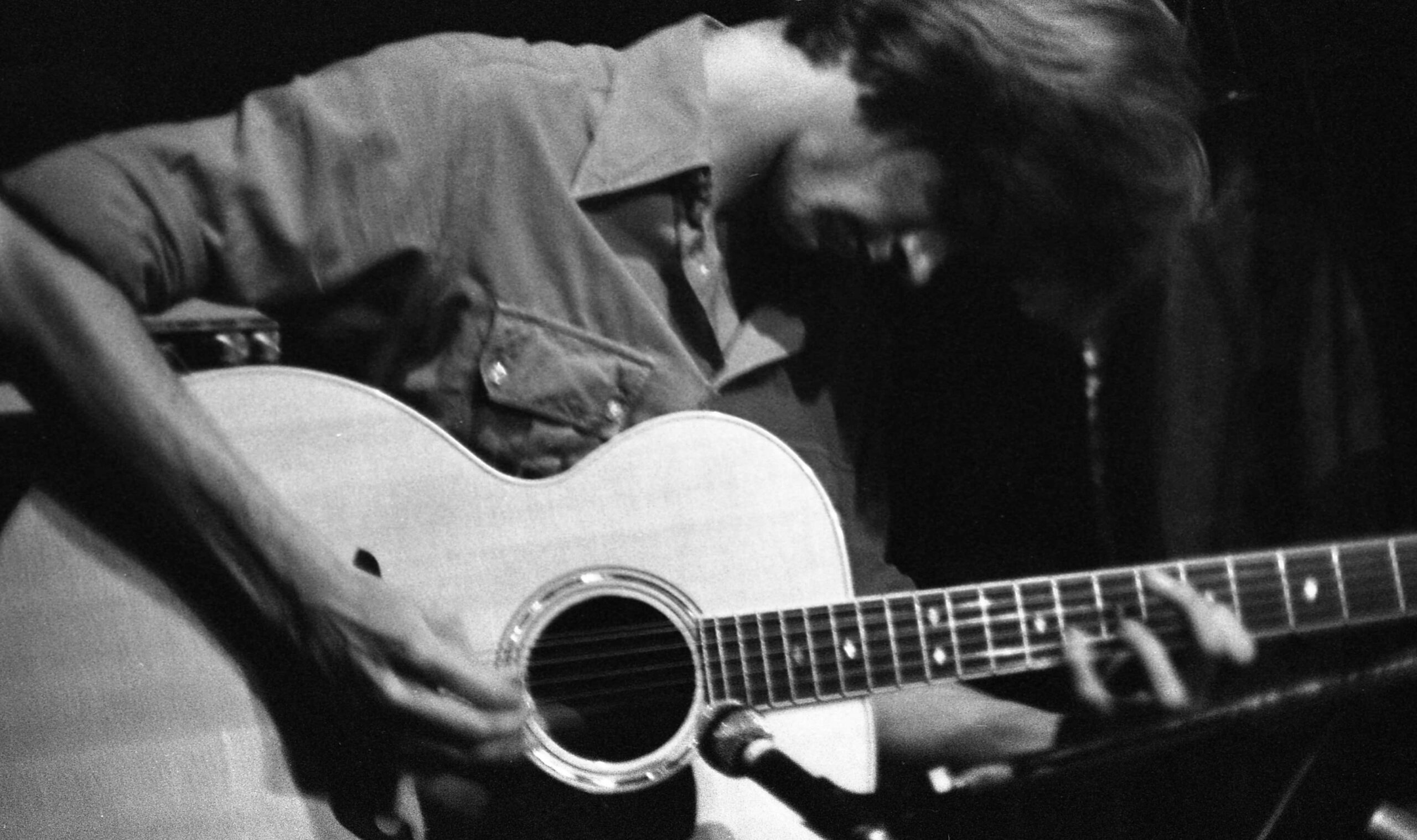 I was telling Nels the other day that he should consider writing his memoir, that it’d be interesting to get a bi-coastal view of improvised music since the 1970s —- He grew up in West LA and now resides in New York and/or on the road with Wilco —- He said it wasn’t in the cards right now —- The first liner notes I ever wrote for an album was Nels & Eric VonEssen’s first album in 1980, we’re old friends —- Photo is 1978 by MW 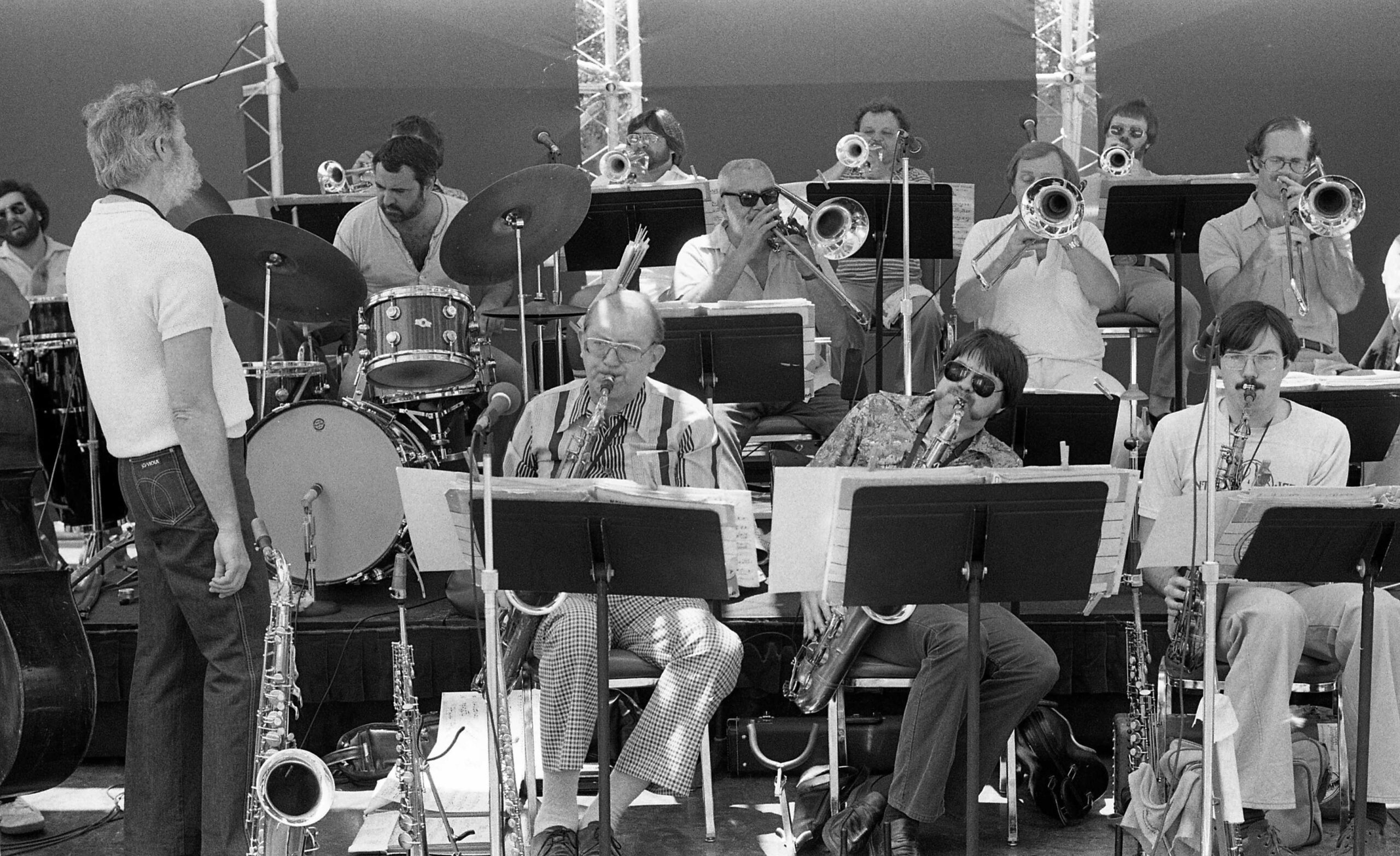 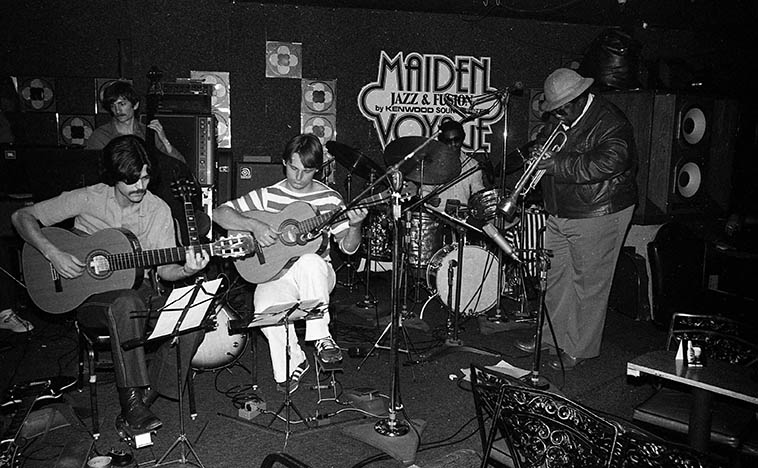 May 10, 1981 trumpeter Charles Moore presented his Eternal Winds Orchestra with Ralph Penland(drums), Rich Ruttenberg(keyboards), Kenton Youngstrom & Redrico Ramas (guitars), Buzzy Jones (woodwinds), Adam Rudolph(conga) —- Charles Moore had relocated to LA from Detroit around this time (check out his two Blue Note albums) —- AND that’s Greg Cohen on bass, fellow enthusiast of Capt Beefheart, who I met when he was with Kenny Davern’s Quartet, around the time of this photo Greg was working with Tom Waits —- photo by Mark Weber at Maiden Voyage club downtown Los Angeles across the street from MacArthur Park 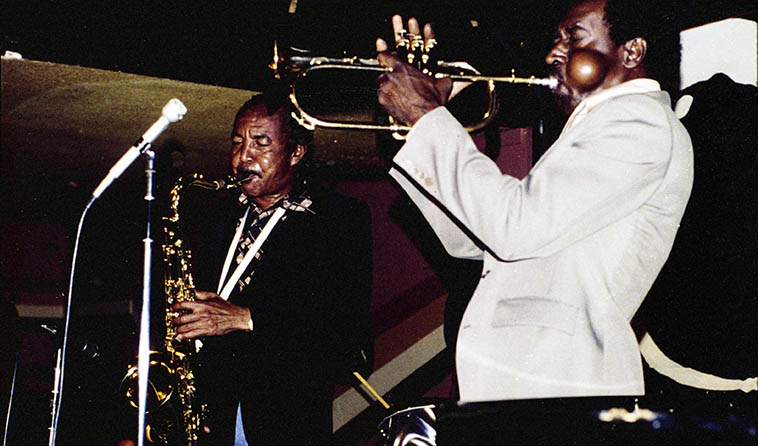 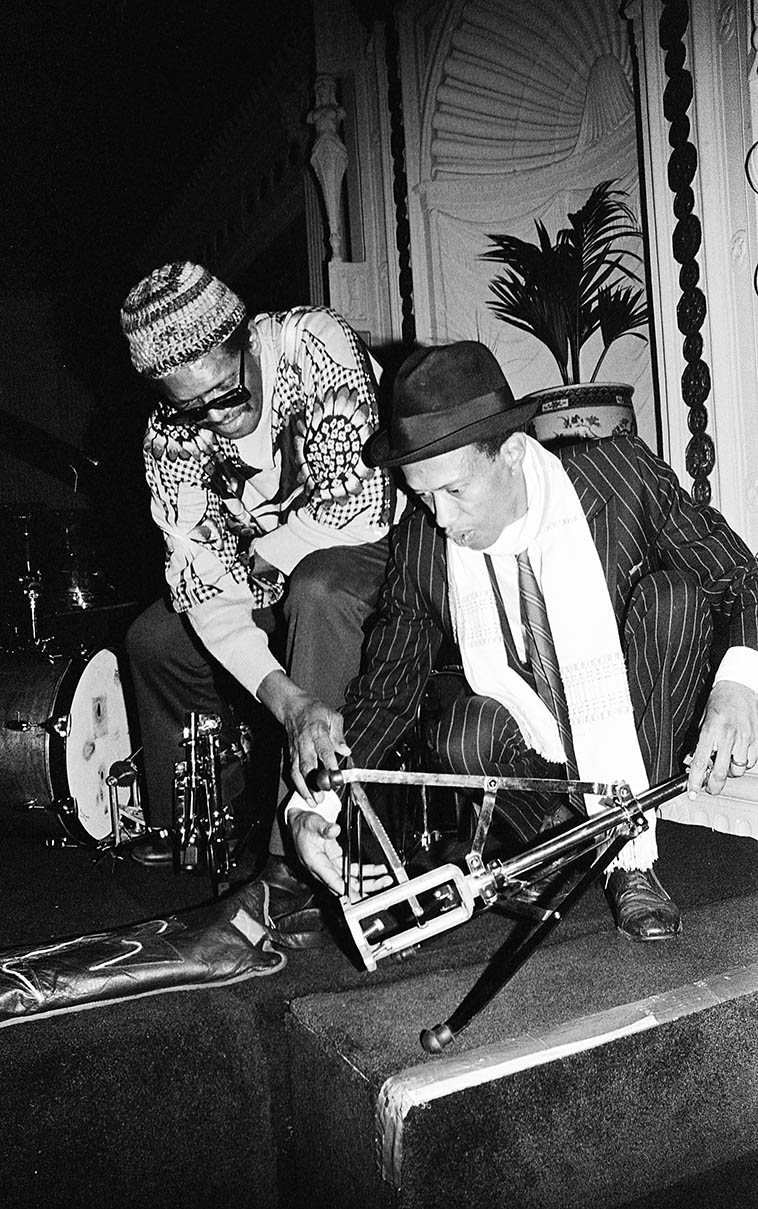 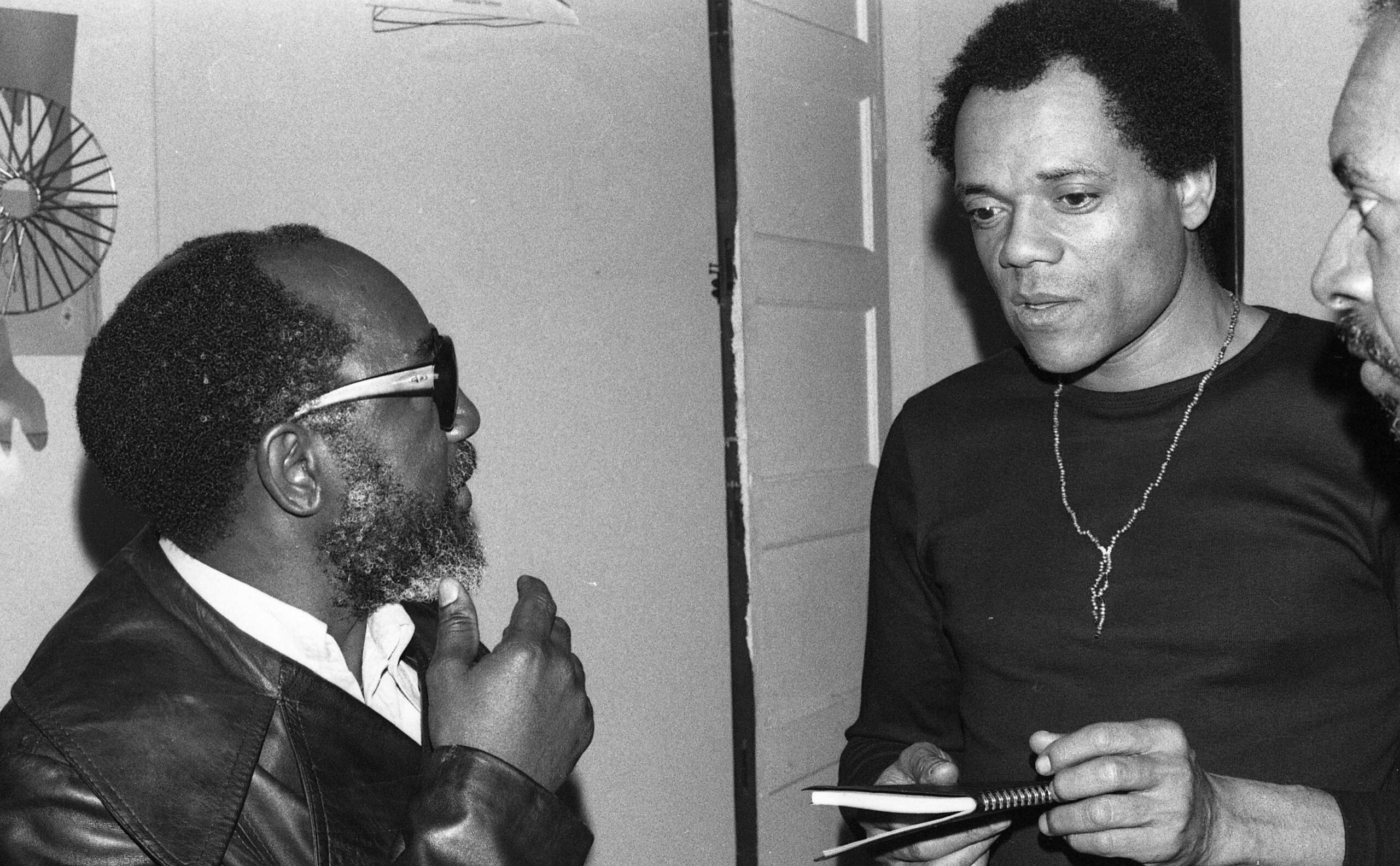 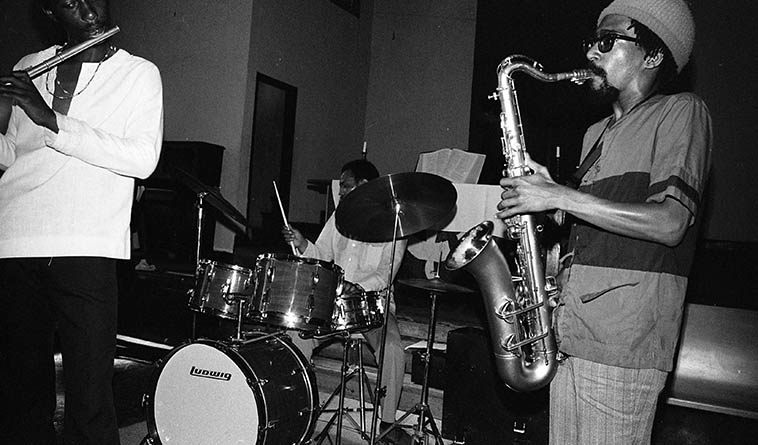 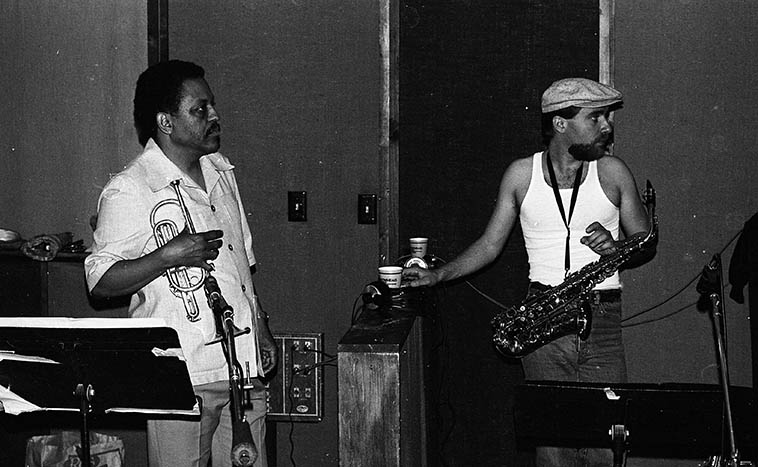 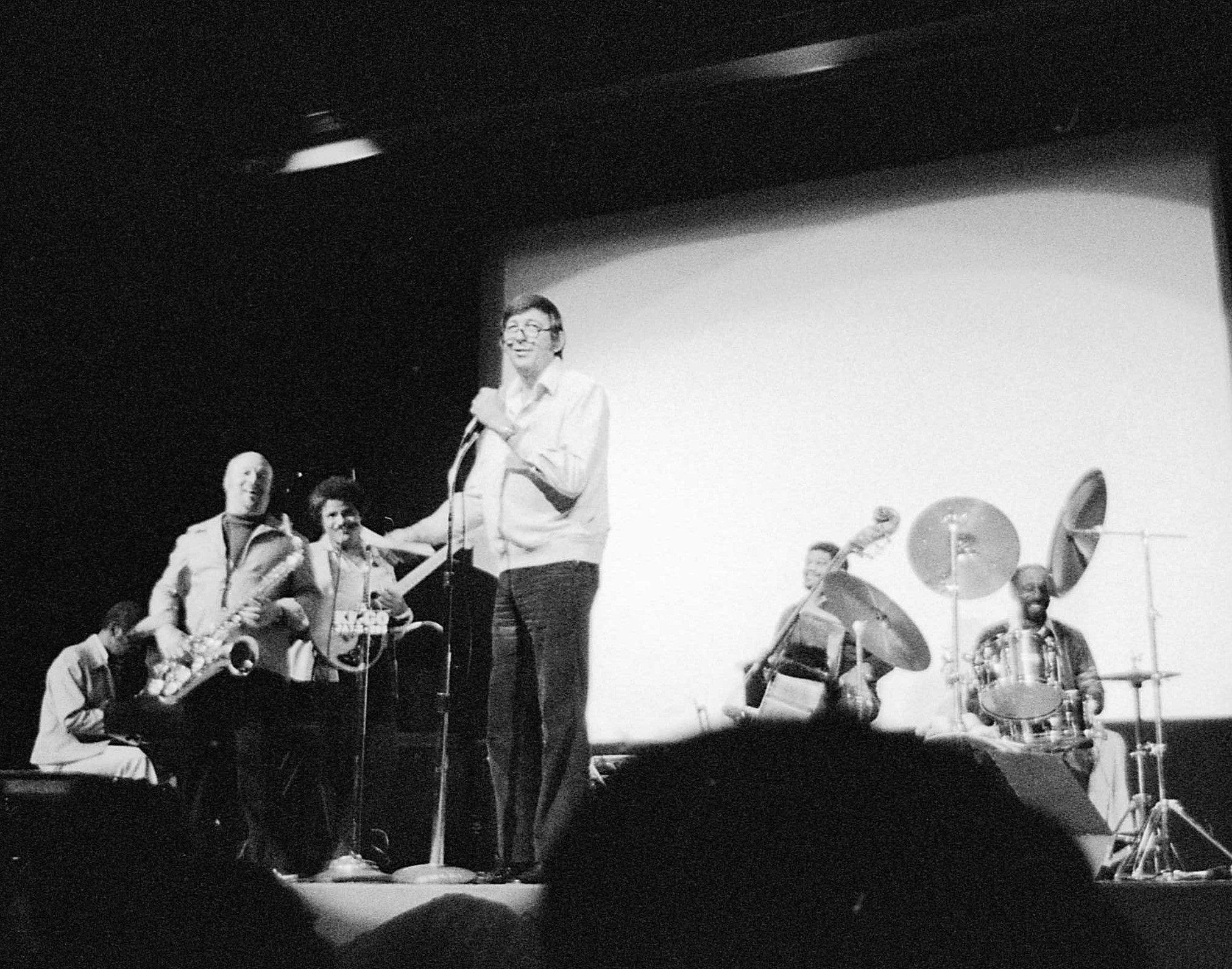 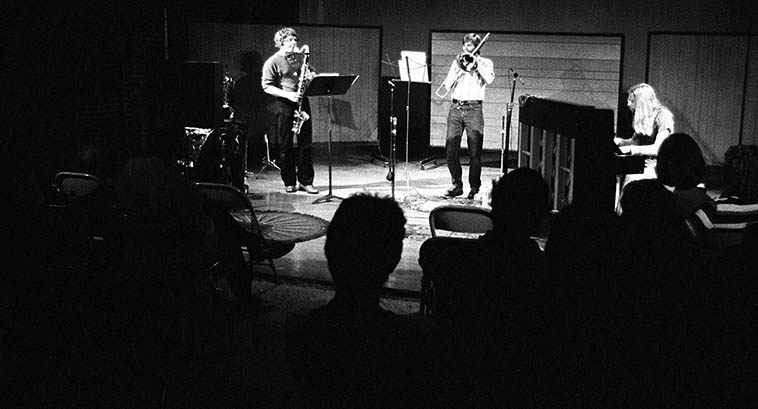 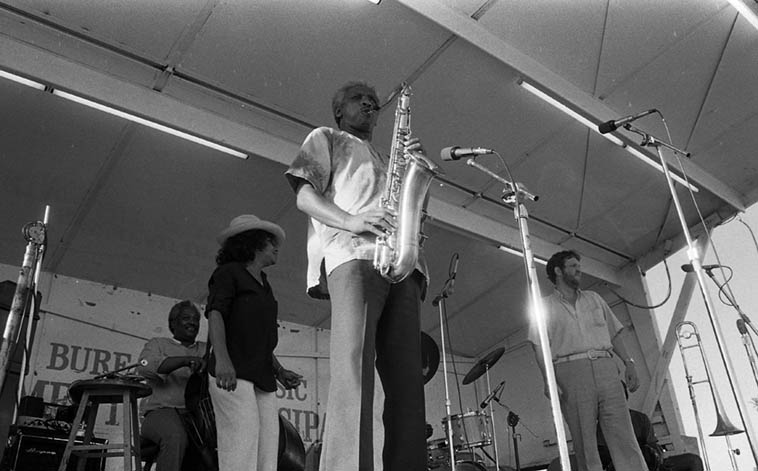 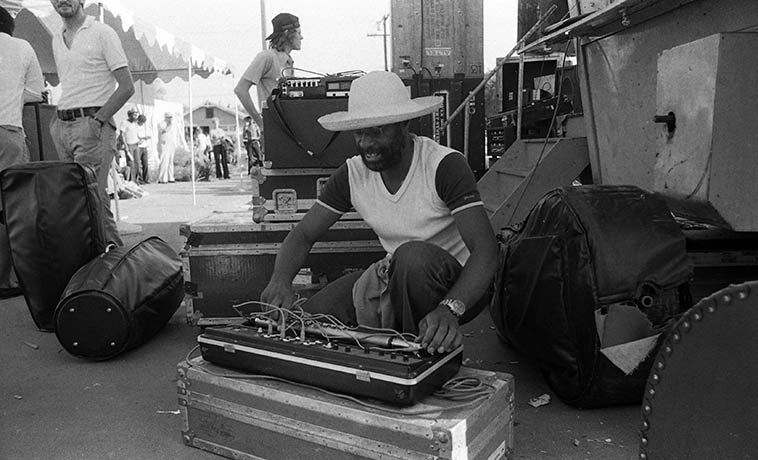 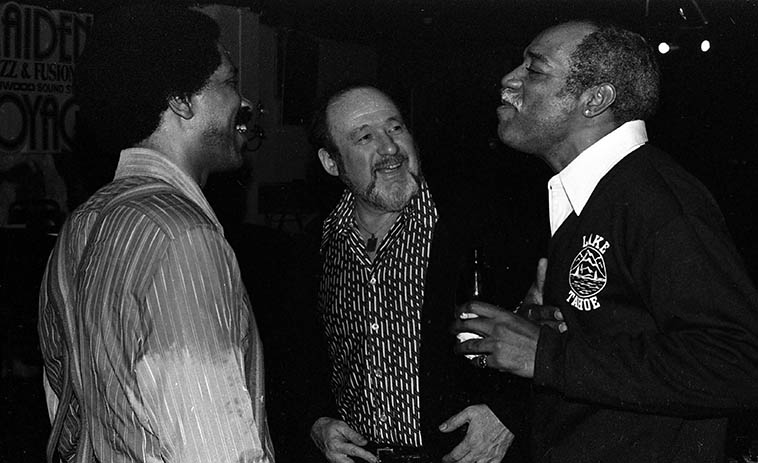 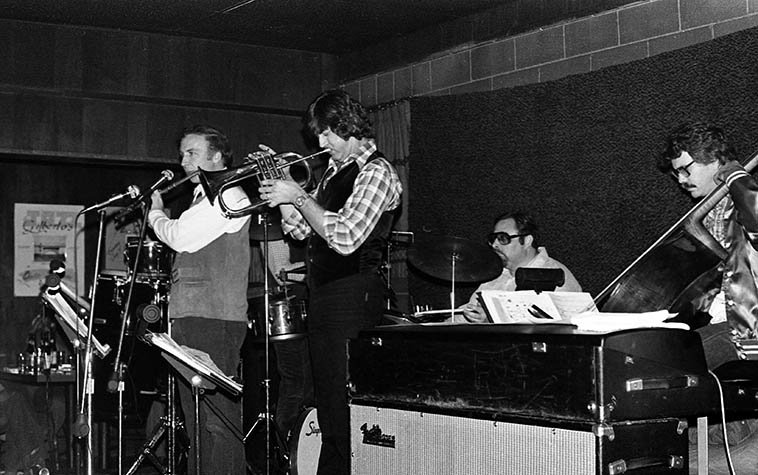 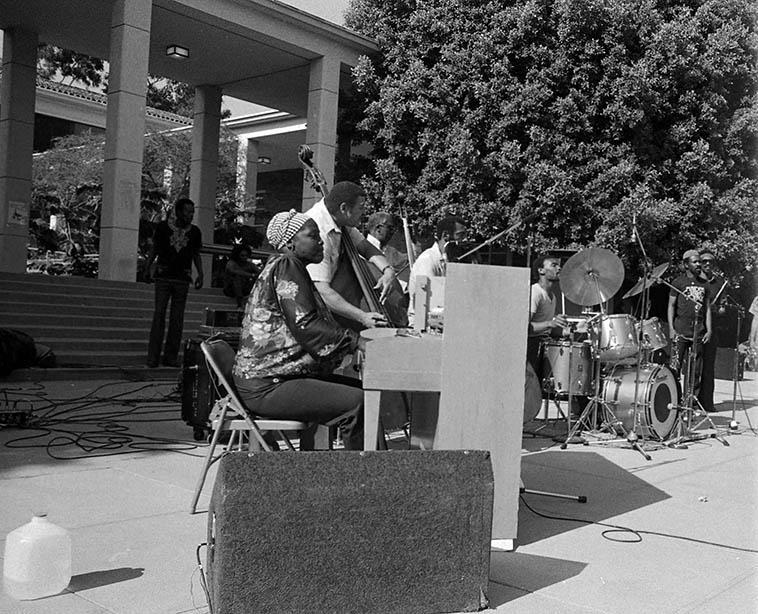 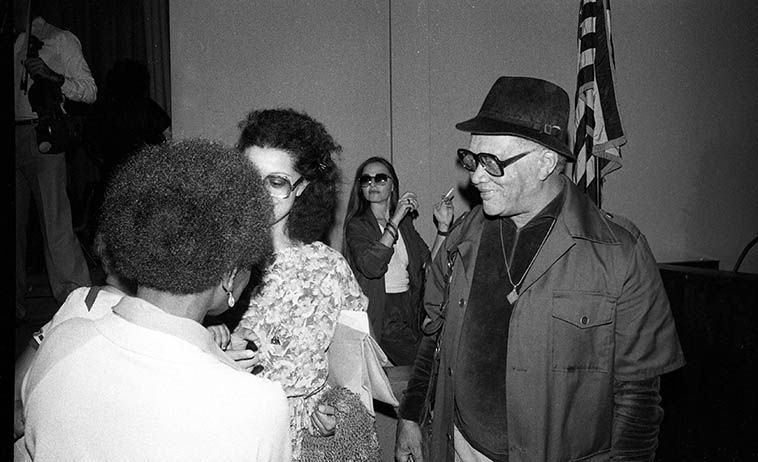 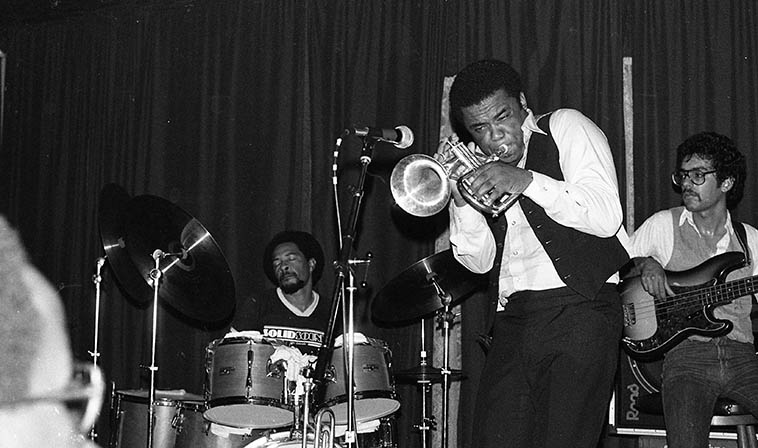 Freddie Hubbard on October 1, 1979 in quartet formation: Larry Klein(elec-bass), Carl Burnett(drums), Billy Childs(keyboard) at a Orient Express, Claremont California, that only presented jazz for a minute and was gone —- photo by Mark Weber 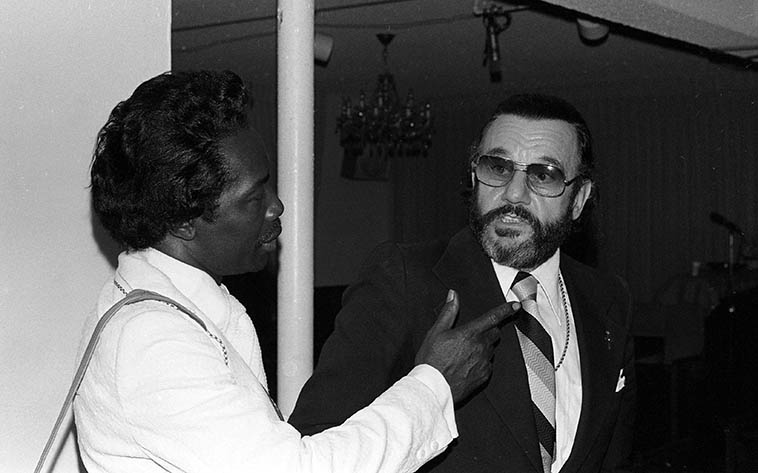 Johnny Otis was a great guy, band leader, disk jockey, record producer, sponsor, advocate, all around super-hip aware kind of guy —- He converted his home into the Landmark Community Church (2077 S. Harvard Blvd, LA) and I’d pop in occasionally and I never heard him preach, per se, all I heard was R&B and gospel hymns and spirituals —- Not sure who this fellow is with Johnny —- Mighty Mouth? photo by MW October 14, 1979 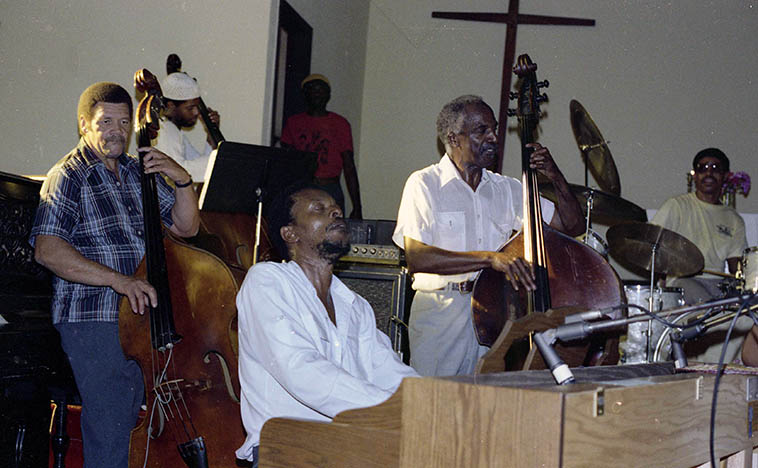 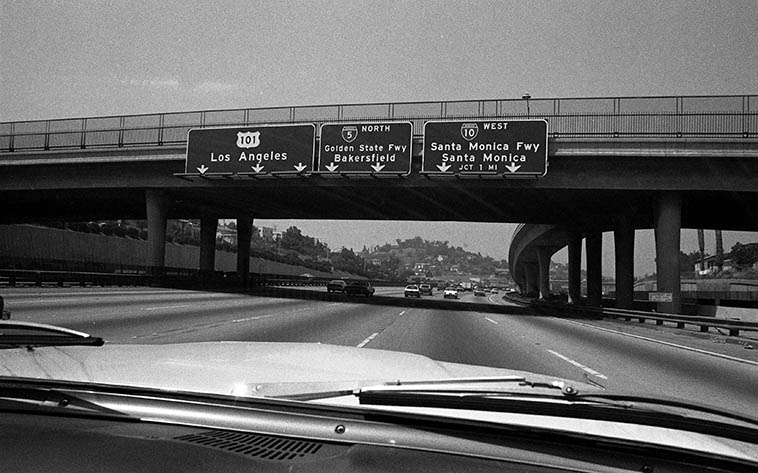 Now you know why Ted Brown wrote that tune in the 50s “Smog L.A.” This is San Bernardino Frwy (Interstate-10) heading west into Los Angeles back when there weren’t that many cars clogging up the roadways —- I’m sitting shotgun in my 1964 Ford Fairlane, a great freeway car —- May 9, 1981 photo by MW