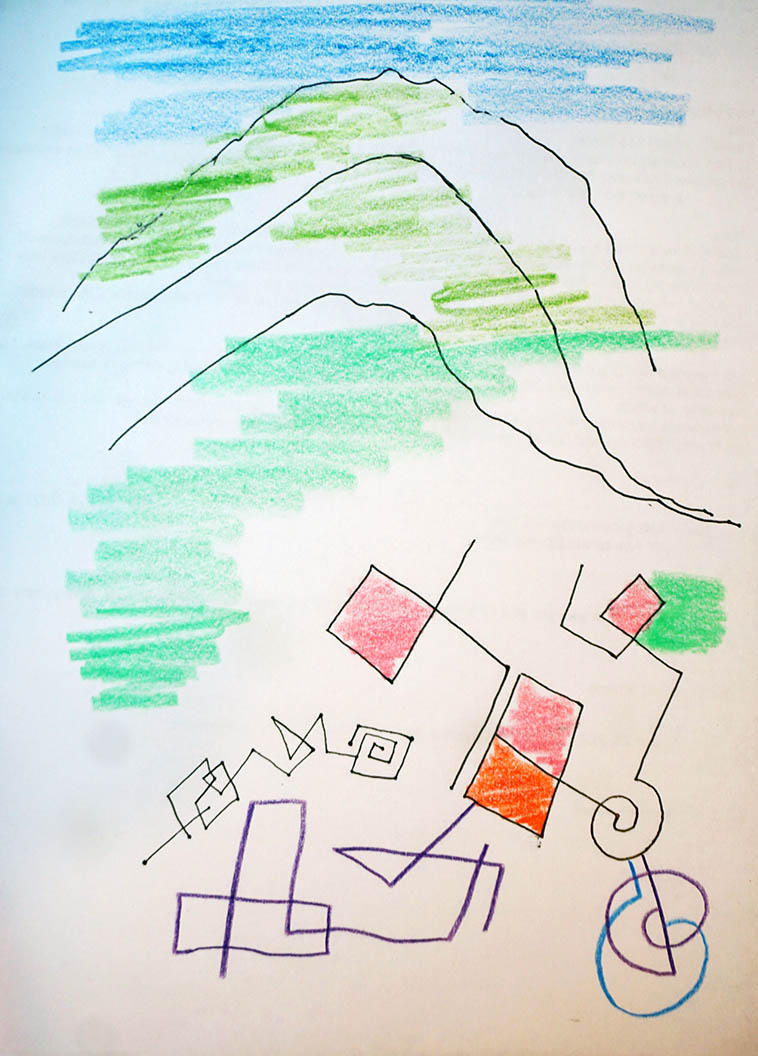 The Sandia Mountains by MW 2021

The mountains didn’t start out as mountains. All that granite was under a vast sea, deep underground, overlaid by thousands of feet of other types of rock colluvium. Tectonic shifts pulled apart in rifts and as one plate fell into the rift it forced another plate up like a hinge, gradual on one side but cracked open on the side that faces the city. This granite came from six miles down, it was once magma but with heat and pressure and time crystalized into pink feldspar and quartz. But, before that uplift several inland seas came and went, each striation of sandstone or limestone that sits on top represent a different sea, a different time. Wheels within wheels. These mountains are only ten million years old, so, hold on to your hats, things are still shifting, fault lines still grinding against each other, the Earth’s molten core is a witch’s cauldron of “Boil, boil, toil and trouble.” It will erupt again, those volcanoes surrounded by lava fields on the west side of town guarantee that. No Deposit No Return —- Remember when bottles used to say that? (We keep one of those 1960s beer bottles over our stove in the kitchen, there was a magical time when you could redeem empty pop & beer bottles for 5 cents!)

Hard to believe it will all turn over and change, that the mountains will erode into the sea, the Rio Grande disappear, my hiking shoes lose their tread, but change is the thing. The Sun will not fizzle out for another ten billion years and until then the coagulated cosmic dust that is Earth will churn and turn and change. When the Sun goes it will get very cold. I hope you have central heating.

9:35
Grasshopper! Spring is here —-
I’m searching for construction date on this modern dam (most bridges in the U.S. have these dates) The city Water & Flood Control Dept never responded to my query, so, I’ll have to snoop around without their help, Grasshopper

10:02
I skirted along chaparral foothills south to find that stony chasm of a wash I came down Saturday ten days ago —- There is a post declaring this is Horse Bypass Trail (a trail by any other name is just . . . a figment of your imagination, but I swear I usually come to Horse Bypass down around and over there yonder . . . a rose is a rose is a rose) This being an alternate route up —- I am just below the Wilderness Boundary fence sitting in sandy arroyo —- Took 2 aspirin this morning before leaving so I must have intentions to make tracks today —- Photo’d a flower that looks something like an opium poppy, red with black stripes, I’ll come back and harvest the bulb when it matures to make opium tea! Who needs aspirin when opium is popping all over? [Commonly known as Longpod Poppies, yes, Papaver! Native to Europe, traveled this way via livestock feed —- blooms in April & May in the foothills and all over the city] ALSO, you can see the Banana Yucca fluorescence down in the swords they call leaves days away from their sudden shoot, also the Beargrass yucca about to send up its flowering stalk —- I pull up my knee straps and re-tie my shoes, I’m going for that fork I balked at last time, having sapped all my energy that day crawling up the other way, to the trail I suspect goes to Sad-Eyed Lady —- Slight breeze, flannel weather, sunny —- This lower wash and savanna a field of those blooming poppies, luminescent in the morning sunlight —- [Years ago an artist painted a giant eye on a boulder way up here, with two tear drops, crying for the encroachment and safety of the mountains wellbeing —- aka The Sandia Eye]

11:05 elevation 7,083 feet
Tea break on Purple Flower Ridge in a patch of sun amongst a grove of Pinyon —- Actually, I see that Pinyon dominates the trail up ahead —- 20 minutes ago I took that fork, and for ten minutes it was brutal 45-degree straight up (Forest Service surveyed trails are more amiable and would cut switchbacks with a more gentle ascent) I’m actually right above Embudo Canyon Narrows, this trail wends around from one side of ridge to the other, still climbing, still curious where it goes? Wind picking up —- Over the next month everything from cactus to flowers to weeds will be in bloom —- Earl Grey still warm from when I brewed it, I’ll have one of those homemade burritos in an hour, once I get further up

11:25
Button Cactus Ridge, these little guys you see only now and again are quite ubiquitous for this stretch —- I change lens, put on 8mm to shoot this frontal view of South Peak with Embudo Canyon in foreground

11:35
Deer hoof and foreleg —- cougar kill —- right in center of trail, like a sign? Look over my shoulder —- Better him than me! I search around for the rest of carcass but it’s been carried off by the various night creatures: weasels, ringtail, fox, even badger, but curiously I have not seen a coyote on the western slopes in years, don’t know why, altho, I have seen what could be their scat —- Of course, the cougar carried off most of it, usually, nothing is left (a few months back I came upon a fresh cougar kill that I must have spooked the cat, and returned a few days later just to see, and it was gone, poof, not a trace)

12:10 Lunch —- elevation 7,597 feet
I just passed another fork! One to the east I suspect goes down into Embudo —- I took the southbound, see where it goes —- I don’t have much of an appetite being in midst of so much death —- Carnage of pine bark beetle devastation and drought of the 2000s, a bad decade for pine —- there are hundreds upon hundreds of dead pinyon here, but also, new yearling pinyon! But this coming summer is going to be a tough one, we didn’t have enough rain or snow this past year, nor did it get below minus 30F to freeze kill the beetles [when there’s a dearth of precip, then the pine do not produce enough sap that repels beetles that bore in and clog up the arteries and choke them to death] —- Maybe it’s time to finally read Mary Austin’s 1903 book THE LAND OF LITTLE RAIN that I have slept on, lo, these many years [“slept on” = jazzspeak = overlooked]

12:25
I still have habit of looking over my shoulder while eating —- Let it not be known that Big Web was et by a mountain lion!

12:35
Break camp, put on my shoes, still plenty of day for exploration —- Really great view of Whitewash Ridge Trail to my north, I can see where I got to last Tuesday, I’ll someday make it to South Peak terminus, but I might have to pack a sleeping bag! It’s just at the upper limits of my physical abilities these days to make it in one day’s Herculean pop —– West is Mt Taylor sixty miles on the horizon, sere blues skies, long swatch of white cirrus clouds, chilly wind, the earth very warm and welcome

12:55 7,635
And yet another summit, highest point for this trail, it now goes over the other side —- Good view of Interstate-40 down in Tijeras Pass —- Have seen no Ponderosa today (the “Ponderosa Zone” in the Sandias begins at 7200 feet)

1:20
Descending steeply down to saddle that continues up the other side even more steeply up a pointy rocky peak —- Somewhere in that direction has to be Sandia Eye, but I’m not climbing that eagle’s nest of a trail, that’s for younger folk —- East of the saddle is Echo Canyon and no trail goes that way that I can see from up here —- Westwards down from saddle is a wash that leads to the U-Mound, that’ll be my go —- Then, long walk up foothills trail to my truck at Embudo

1:29
Like every good saddle there’s always a Signal Oak —- this one is an old olde grandfather Juniper (One-Seed) that has seen many wayfarers over the passage of time and space —- And like every saddle & pass since time began the winds barrel through the funnel —- There’s probably a ravine nearby full of windblown sombreros —- Should I take a siesta before final descent? I’ll sit a while and think about it —- The red blooms of Indian Paint Brush beside me

1:37
Son of a biscuit! Grasshopper, Jesucristo, and Buddha, too! That fuckin’ hurts, yow, banged both my elbows taking a fall on this slippery granite trail —- Bound to happen, I suppose —- I had been thinking how my circumspection over cougars is somewhat founded in the climate change that is over-taking the Earth, when out from under me my feet lost their footing —- Climate change effects changes of all sorts, behaviors & attitudes & dining habits —- Great White Sharks are now found along the California coast from Monterey to San Clemente —- Well, nothing seems to be broke, a little blood to consecrate this hike, I haul myself up and try that again

2:15
Gawd damnit, I thought my climbing was over for today! About 30 minutes back at a Y in the trail I took the northward one that would steer me away from U-Mound and take me closer to my truck, and I figured correctly I’m sure, but this damn trail has gone up another steep trail to yet another boulder-strewn saddle on which I am now resting —- purple, white, red, yellow flowers all day —- in a few weeks will be a profusion. Earlier, I had been thinking that I’ll hike these mountains so much that it’ll turn into an impressionistic blur and I’ll be able to distill it all into a few pages! Or, even a Haiku! 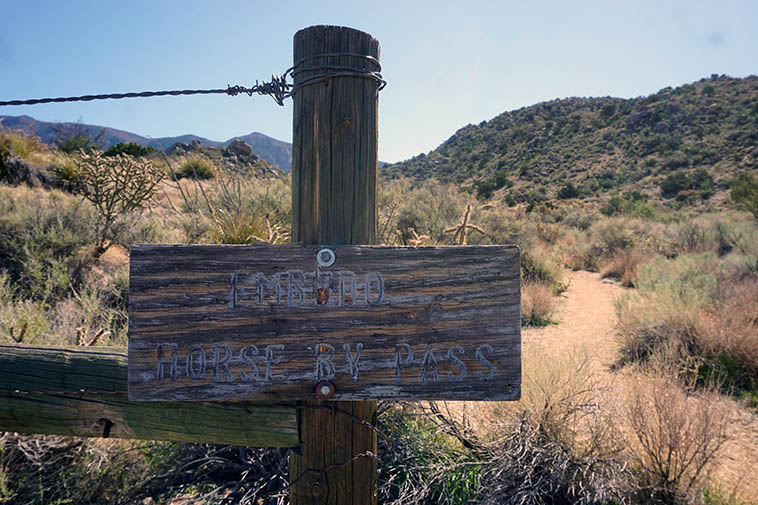 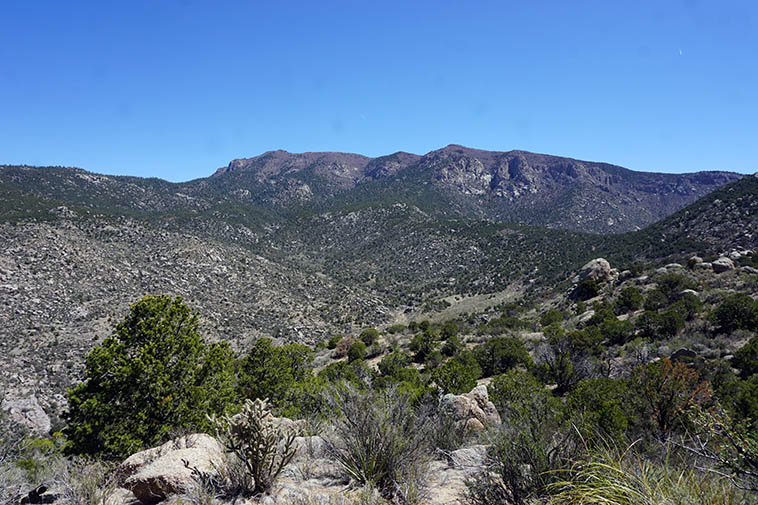 View down into upper Embudo Canyon and South Sandia Crest (9,782) and to the left, along that ridge and the saddle I made it to last Tuesday on Whitewash Ridge Trail 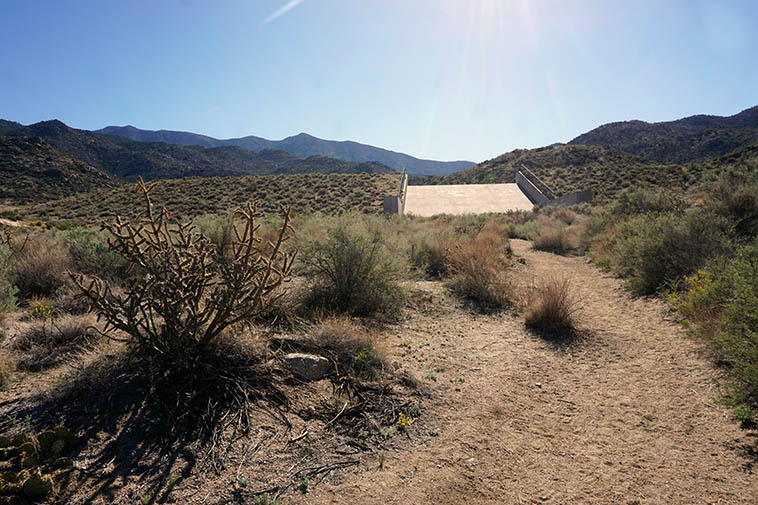 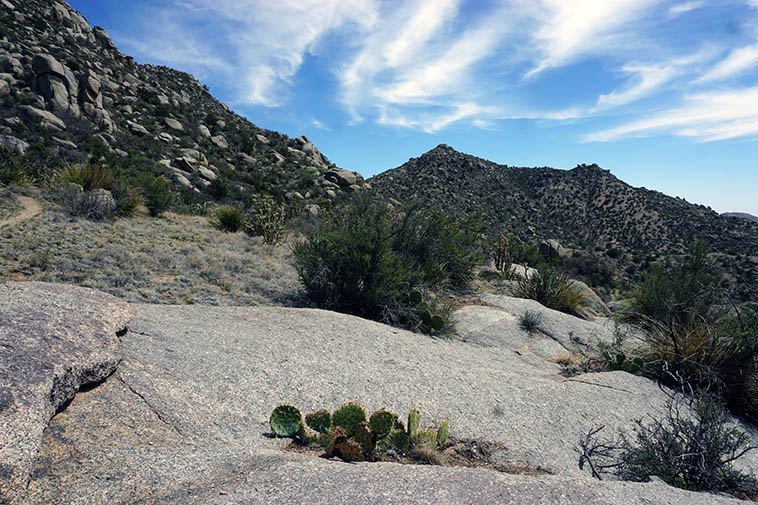 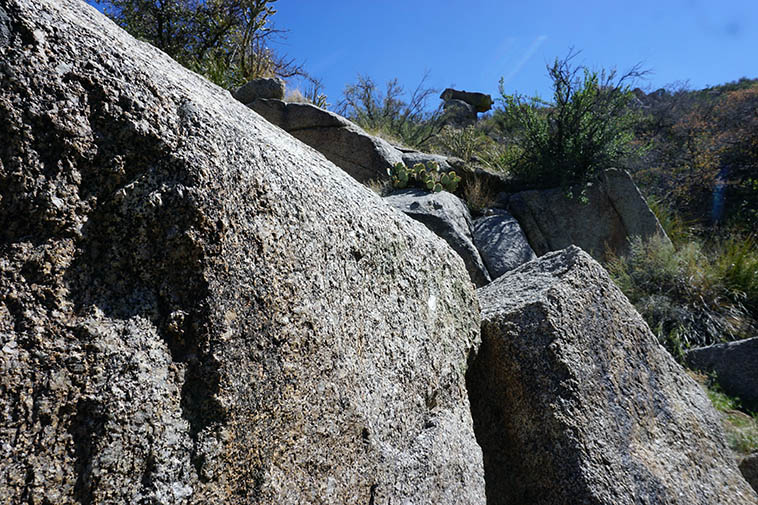 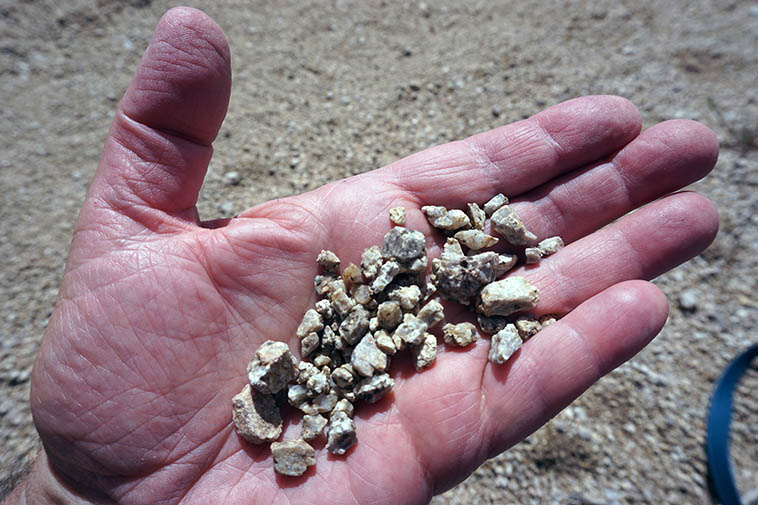 “Sandia granite is an igneous rock that crystallized about 6 miles deep in the crust from magma at a temperature of 1300F . . . potassium feldspar crystals grew . . . quartz veins and pegmatite cross-cut the granite . . .metamorphosed . . .” ibid. 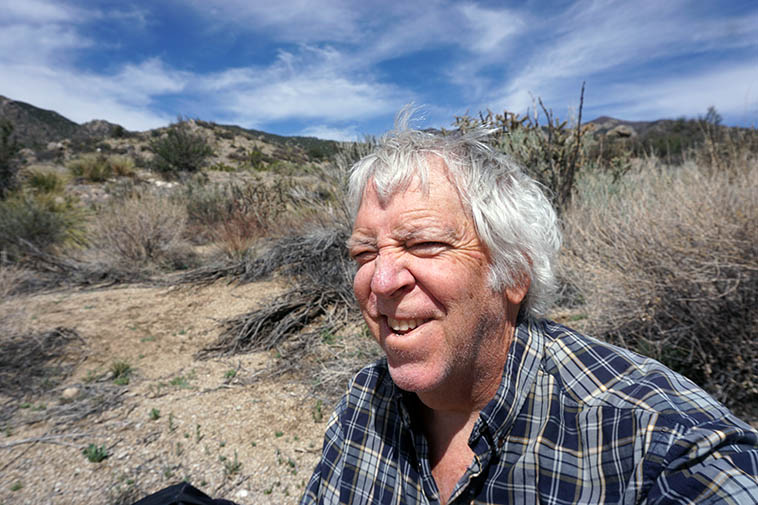 Hard to squint and smile at same time (I removed my sunglasses in this glare) I love these mountains, such a scramble and crawl. Hokku: Leisure takes tea / in two cups —- Refulgent, shining, radiant 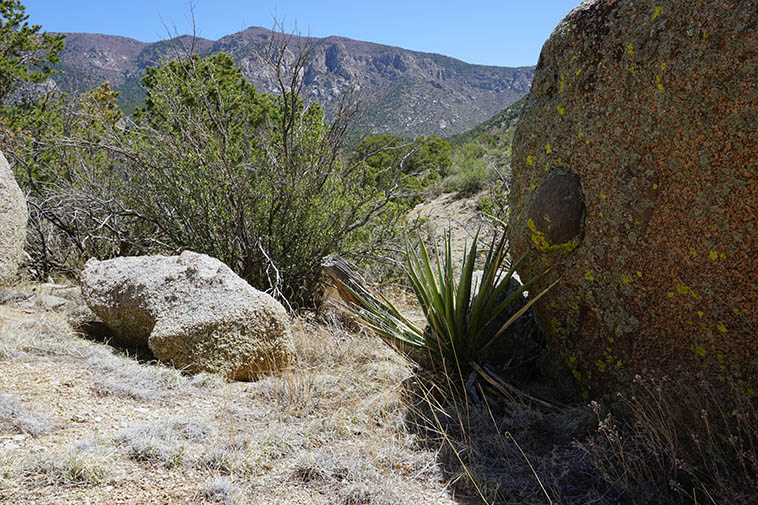 South Sandia Crest and in foreground that round rock stuck in the granite is “intruded older rocks, formally lava, sandstone or shale, that has metamorphosed into the granite” —-Adam Read & Sean Connell (2010) GEOLOGY OF NORTHERN NEW MEXICO 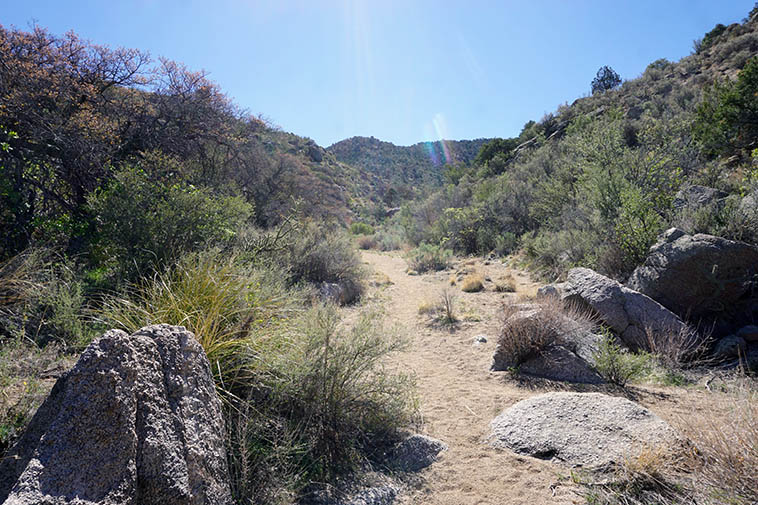 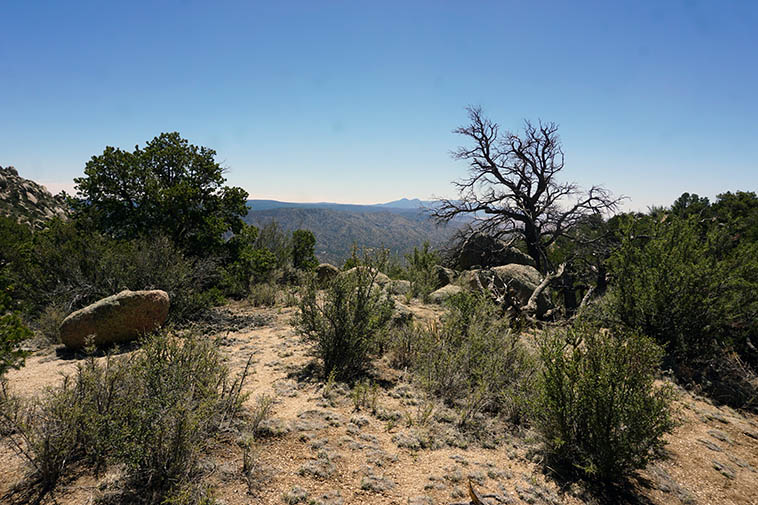 Lunch with view of Monzano Mountains to the south —- 12:49 Noon elevation around 7500 feet 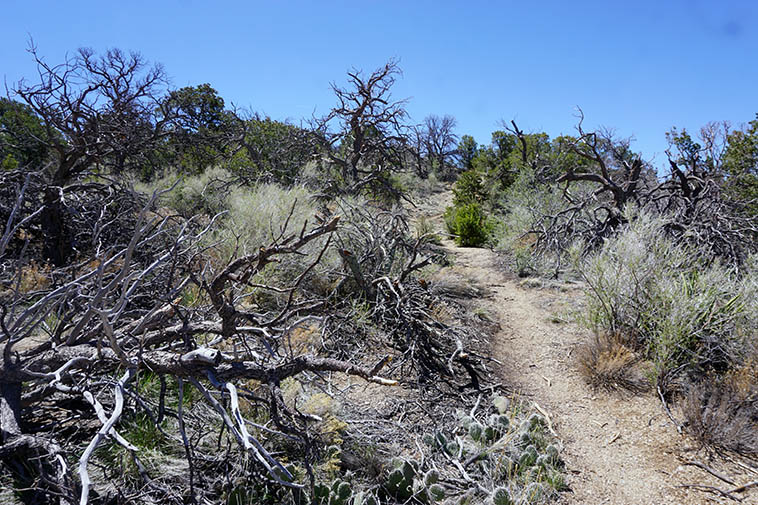 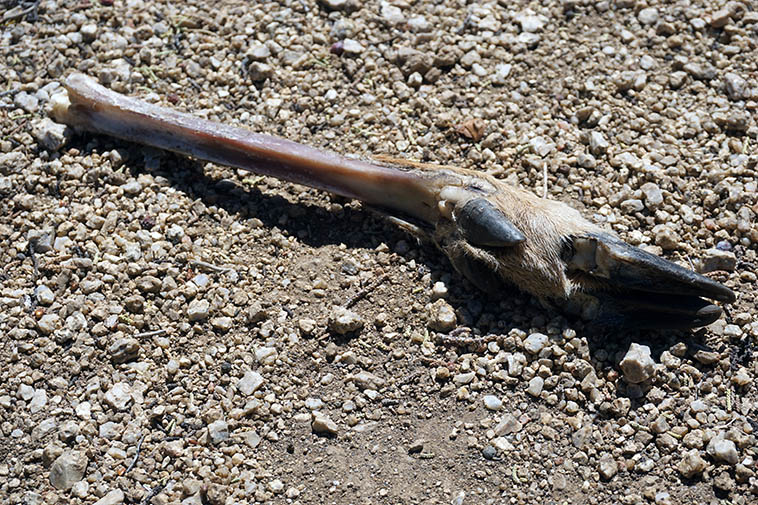 Cougars are ambush hunters —- This one has had his fill, so you’re good, for now 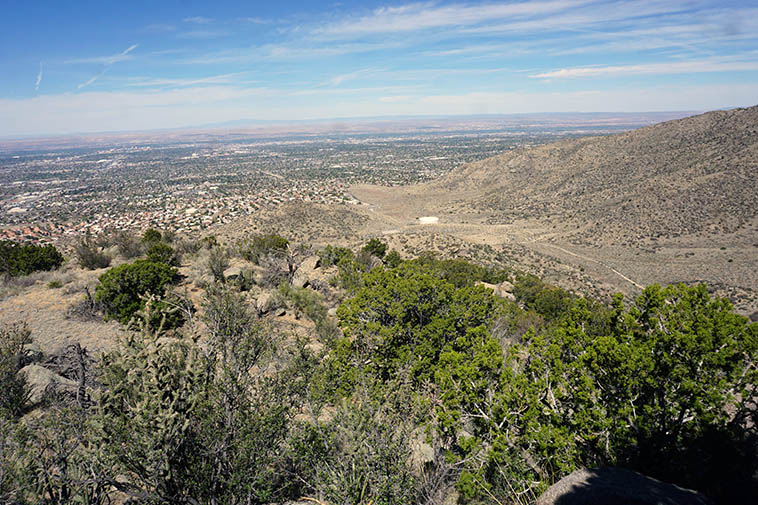 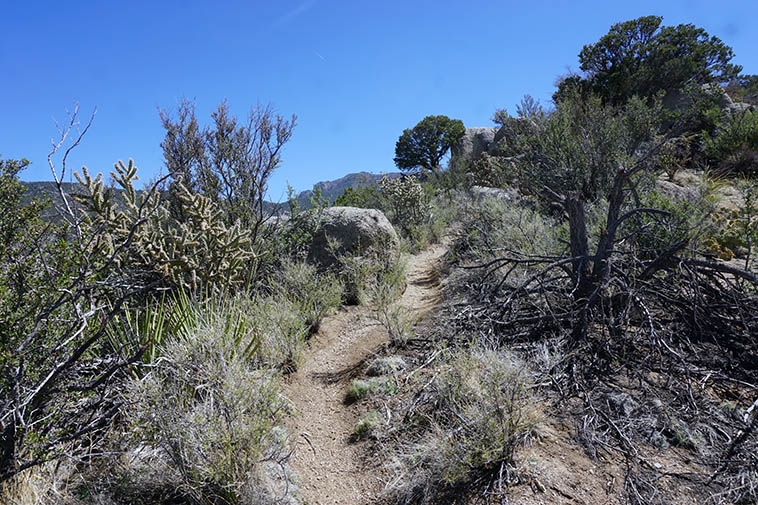 Trail going up —- somewhere around 7100 feet 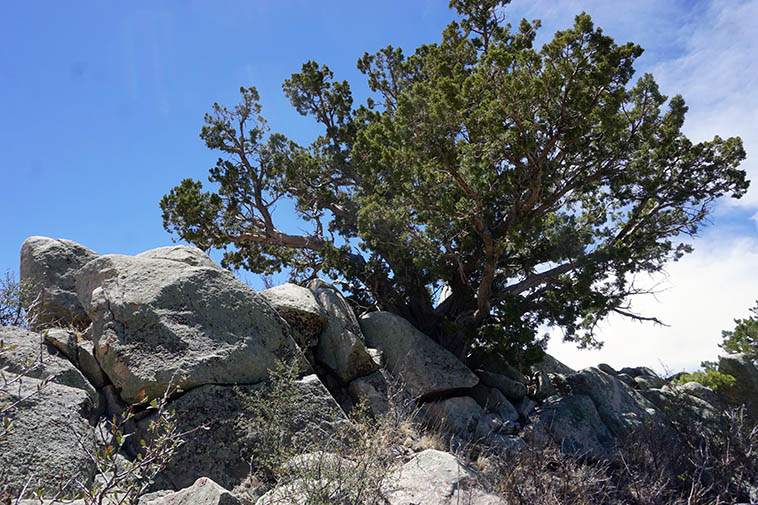 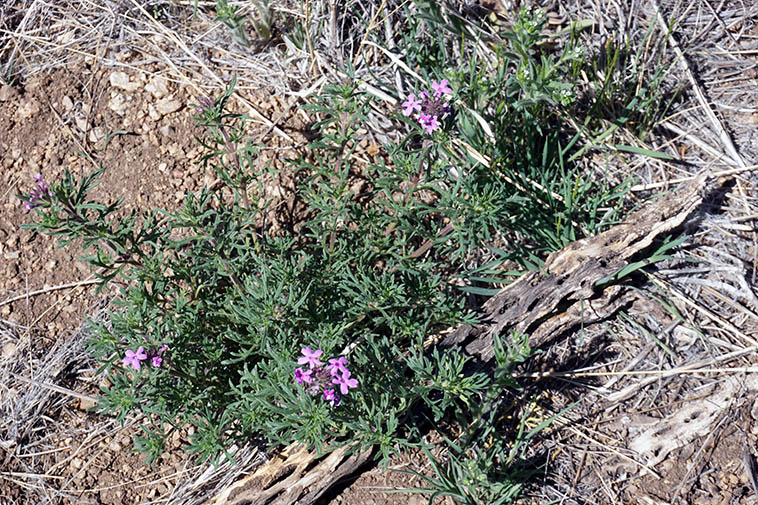 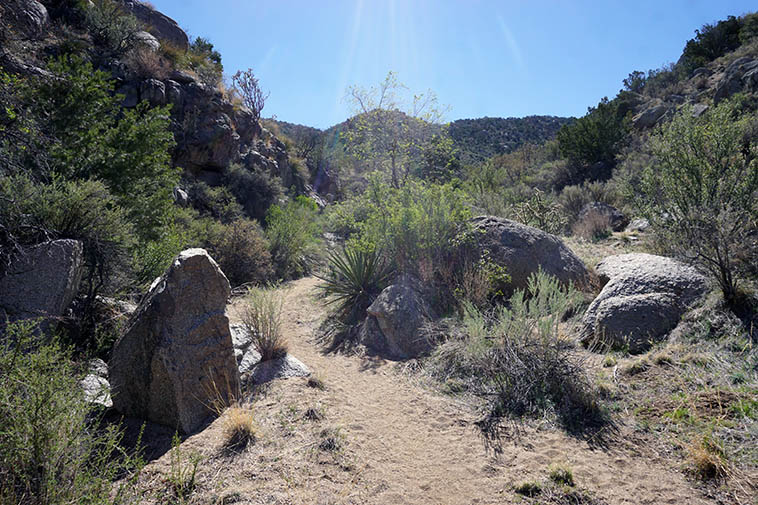 The land of little rain 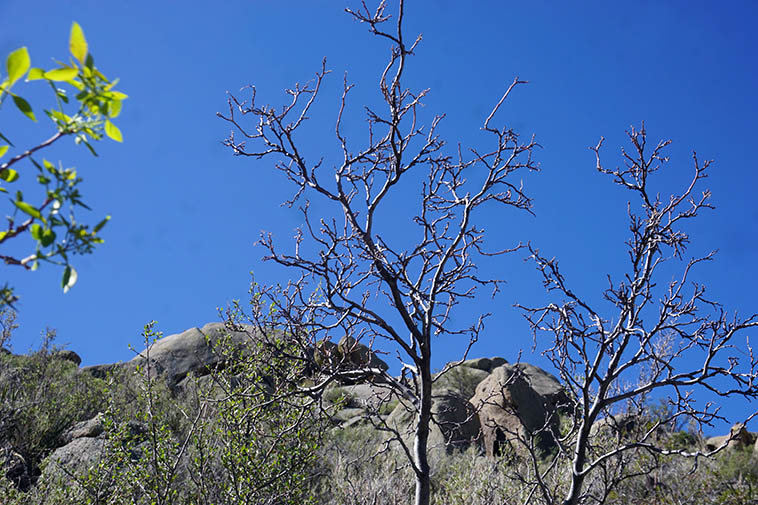 Boxelder (a cousin to Maple) just coming into Spring bloom, a common tree in the arroyos in these parts 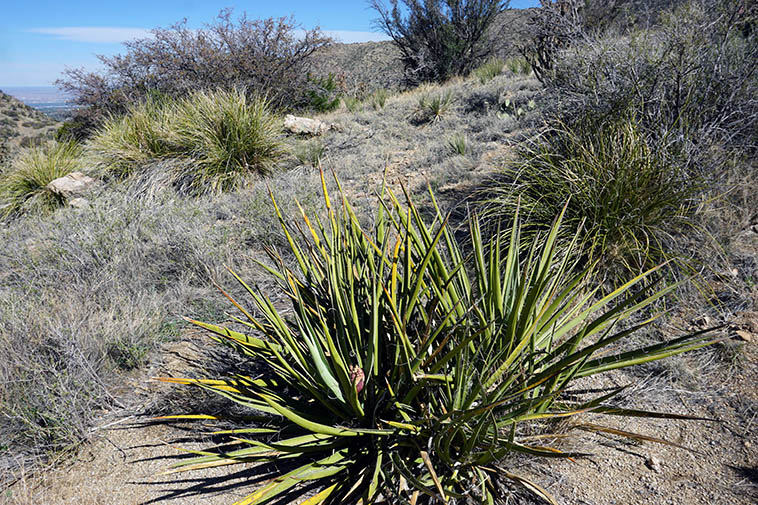 Banana Yucca coming into bloom and in the background: Beargrass yucca, and Albuquerque in the distance —- April 26, 2021 — photo by MW 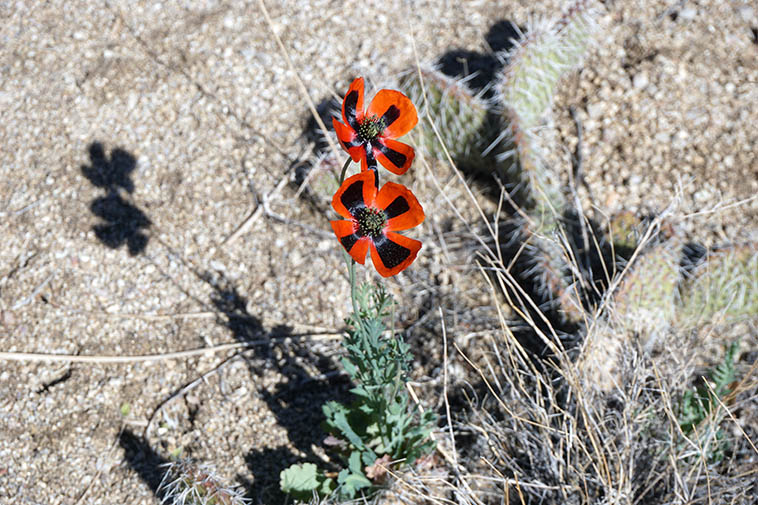 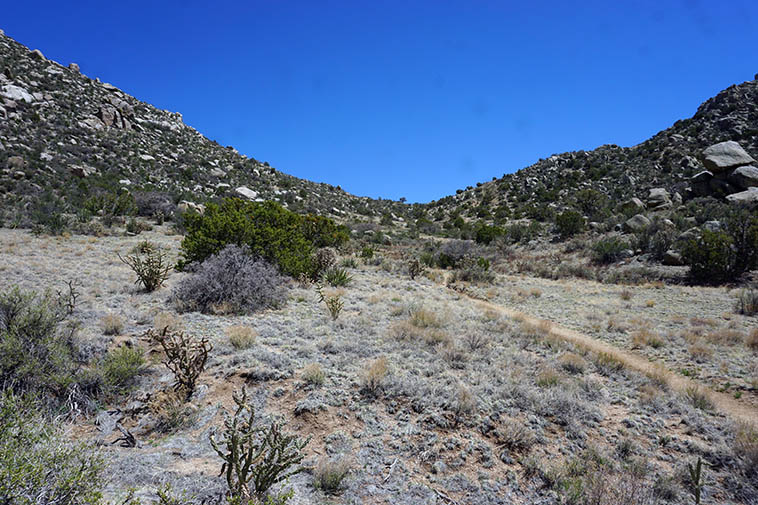 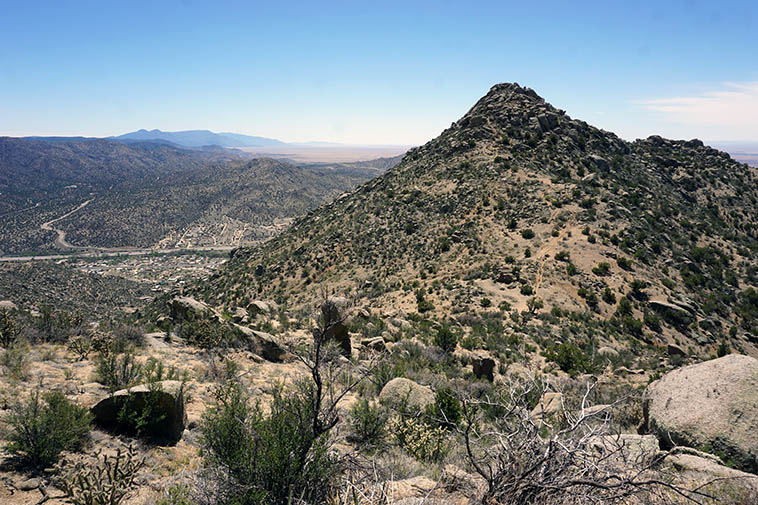 That pointy peak that I refused to climb —- My elevation gain today at this juncture has been 1,565 feet and that’s fucking enough, my age catches up with me —- Dig, the Empire State Bldg is 1,454 feet —- Eiffel Tower is 1,063 feet —- Big Web is 5 foot 9 inches (I shrunk an inch a year or two ago)! Topo map gives it no name, but calls it at 7,657 which isn’t that much higher than where I’ve been today but it sure looks higher —- Anyway, leave that for the billygoats, I’m heading down to that saddle —- I call it Eagle’s Eyrie, and that road is Interstate-40 in Tijeras Pass