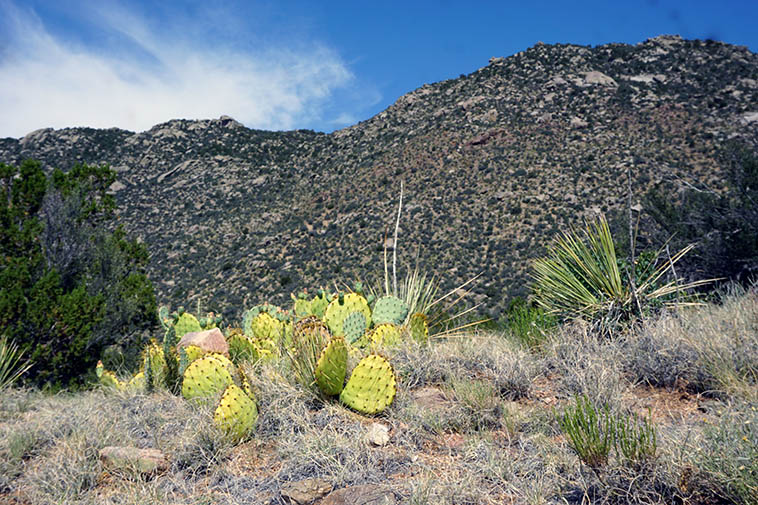 Some people you never know if you’ll see them again.
Life is like that.
We’re not really out of this pandemic, yet, as the U.S. tentatively
emerges from the Health Safety Lockdown of the past 16 months.
Danger still lurks.
Death is waiting around corners.
So much has changed.
I spent most of the time
walking in the nearby mountains.
I really feel for those stuck in their homes.
We have 10,000-footers looming over Albuquerque
with many trails, canyons, arroyos
I give thanks to the Great Spirit
and the Goddess of Creation
For this mystery and
for giving me the strength to walk in these wild places. 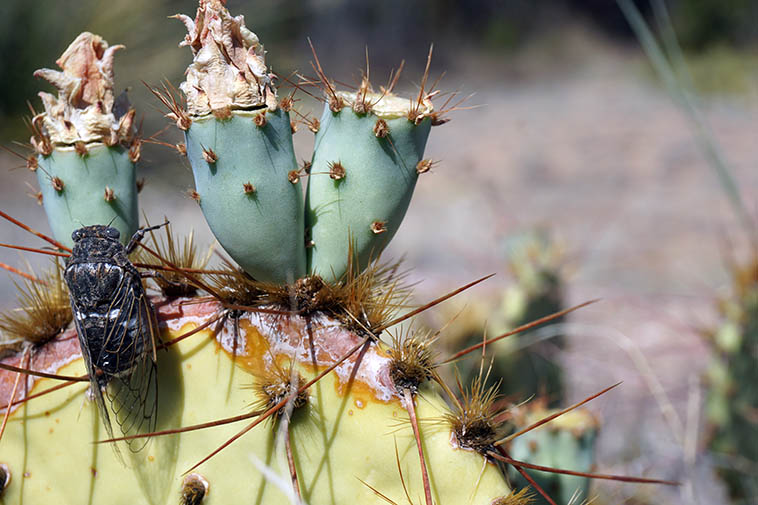 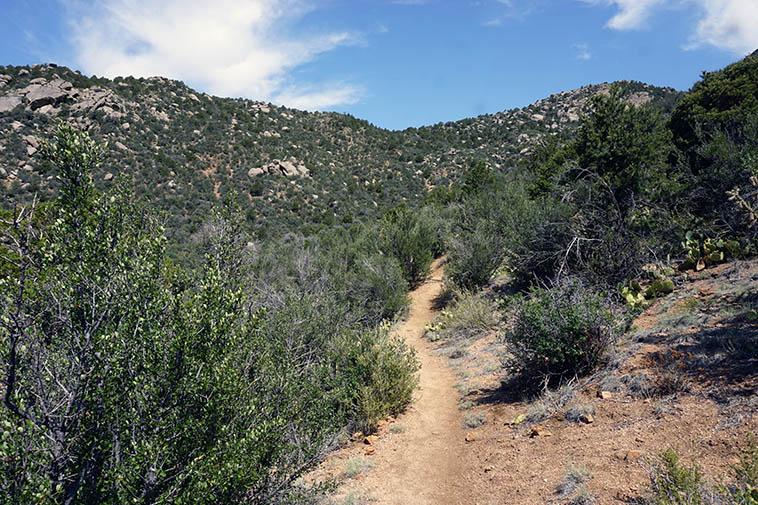 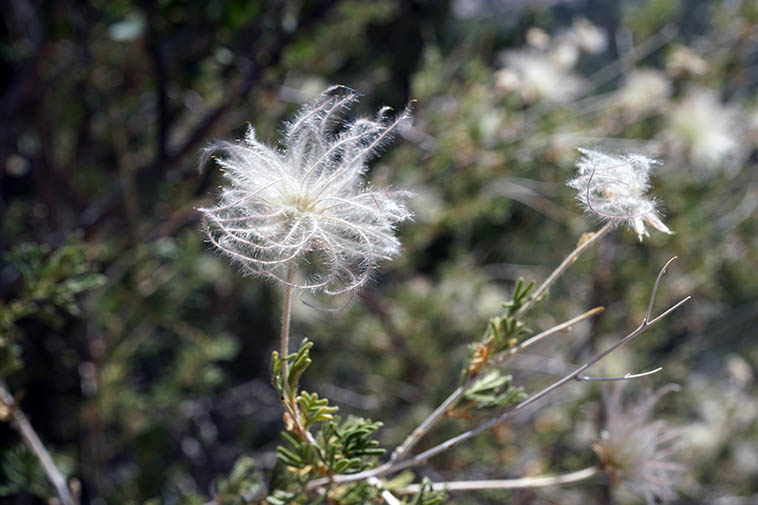 Apache Plume in one of its various multiform aspects 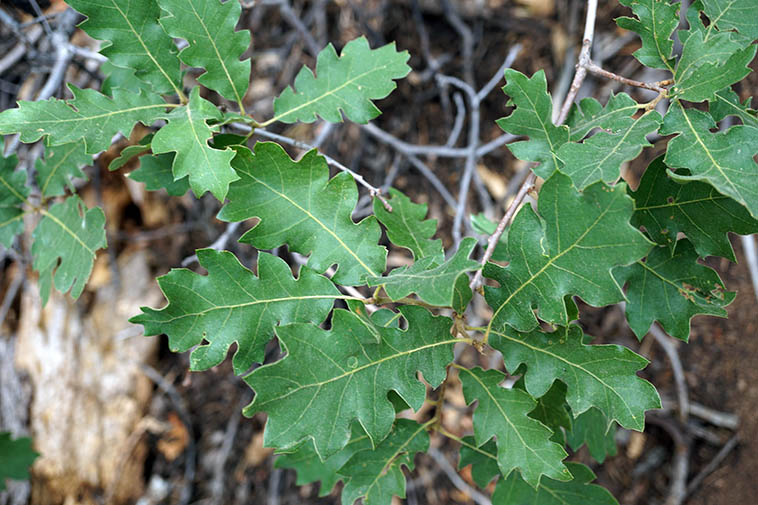 Oaks hybridize easily —- This one has Gambel Oak and Wavy Leaf Oak characteristics, but neither of those have the pointy leafs this one has, maybe Turbinella Oak got into the mix? (There are 4 varieties of Quercus in these mountains, plus “Poison Oak,” not really an oak, just looks kinda like one) 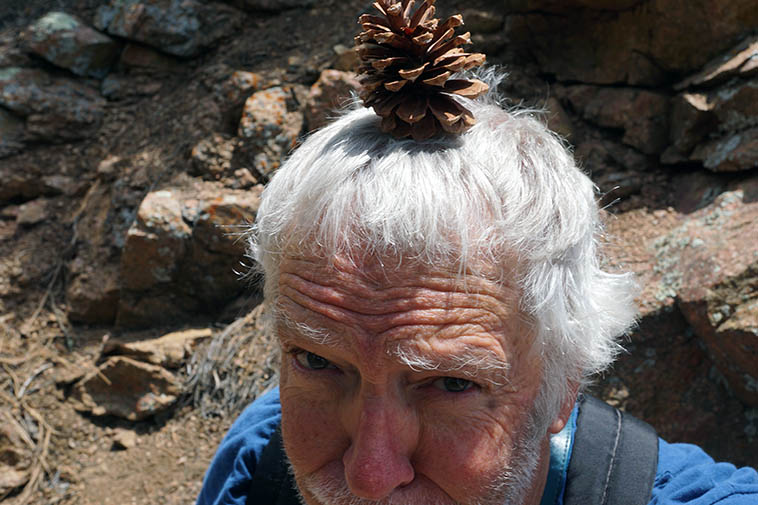 The day begins innocently enough. The unexpected has other designs.  I park truck at Three Gun Springs Trailhead and three hours later I’m on the ridge.  Earlier, the only other person seen on trail this day, young lady returning down trail mid-morning, I told her where I was heading, you meet the nicest people out in the wild, was concerned, I told her I was fine (I must look my age?) she relented and said, “Well, BE CAREFUL!”

By 2:30 I made Oso Pass, the point of this reconnaissance today is to strategize which route I’ll take later in summer in my climb up South Peak. Oso Pass is the junction of the 3 approaches. I must have suspected something was amiss as my Shirtpocket Notes has a notation about two friends of mine who died recently on these mountains, old guys. I was inordinately tired. I’m not usually this tired. And I needed to start down, it was going to be a slog. After a shorter than needed rest (the gnats bothersome this time of year), and in retrospect, this is where things went weird. How I took off down the wrong trail is spooky.

An hour later I make a note that I’m lost and confused, don’t know where I am? Unbeknownst to me I was experiencing Heat Exhaustion —- 95-degrees and altitude, I misjudged the day, ran out of water. I know these mountains fairly well, I’ve been in them for 30 years and this past 16 months three four times a week, I even hiked through the winter, nothing stopped me, but the Sun had other ideas. I begin to lose control of my leg muscles, they were wobbly, weak, I fell quite a few times. I might have fainted a few times, I don’t remember. (I hope this story not descending into the overly-dramatic?)

It wasn’t until I rounded this escarpment and came out of the trees late in the day and saw the city water tank in Embudo Canyon, miles below, did I realize where I was: a cosmic joke to be on Whitewash Ridge, a brutal straight up straight down tumble of colluvium and scree and cactus. In my delirium I made few phone calls, my throat so dry I could barely speak. Left messages. All of which I have no memory. Cal came and rescued me with water, “It has electrolytes,” which I gather’d was a good thing? There are parts of this world I am not a part of. I lost 5 pounds in water weight (gained it all back after I rehydrated). My ankles were a rash of blood red broken blood vessels.

Janet said, “Subdural bleeding —- Your body was about to shut down!” so were my hands (I didn’t show Cal, didn’t want to alarm him any more) were vibrant red, Janet said, “a mechanism to dispel body heat, your body was in shutdown.” She was a little angry with me. SO, in summary: I’m writing a book about these mountains. My dear friends look at me like I’m crazy when I tell them, this whole misadventure was merely research <grin> Now I know something else about these mountains. They almost took me.

I’m writing this 3 weeks later —- That day still lingers —- I’ve gone out many times since, always careful, it wasn’t as bad as it sounds, just a close call. 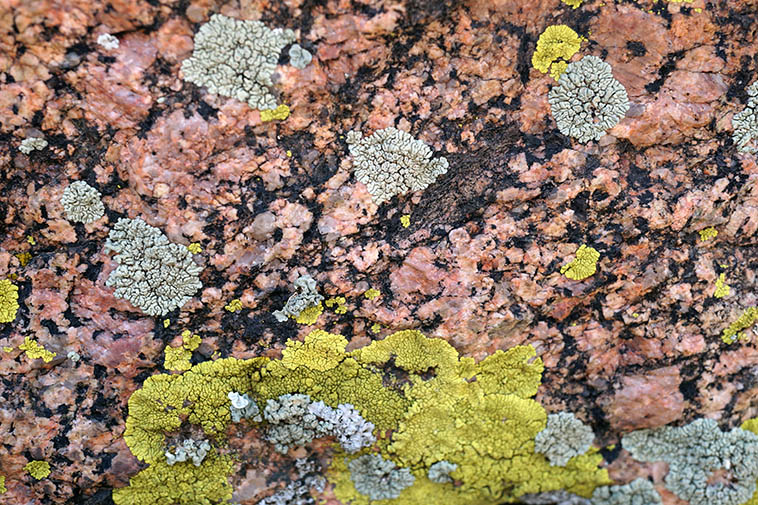 I’ve often thought these mountains should be called the Lichen Mountains —- granite is the substratum of these rocky mountains, capped by sandstone/limestone from ancient seas of 300 million years ago, plus —- (the granite is 1.4 billion years old. These mountains were not upraised, yet, when the dinosaurs roamed these parts. 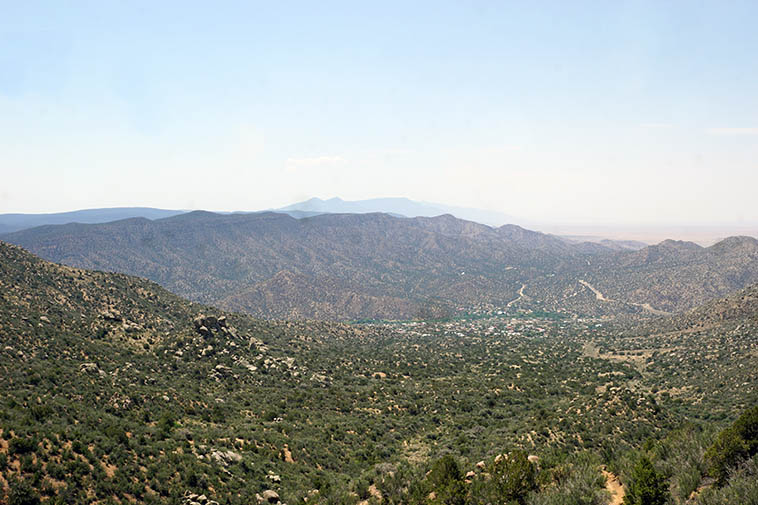 11:39am View south down 3 Gun Springs Trail —- That’s old Rt.66 (I-40) going through Tijeras Pass with Manzano Mountains in distance —- Particulate haze in the air added to health hazard (smoke from fires up north) 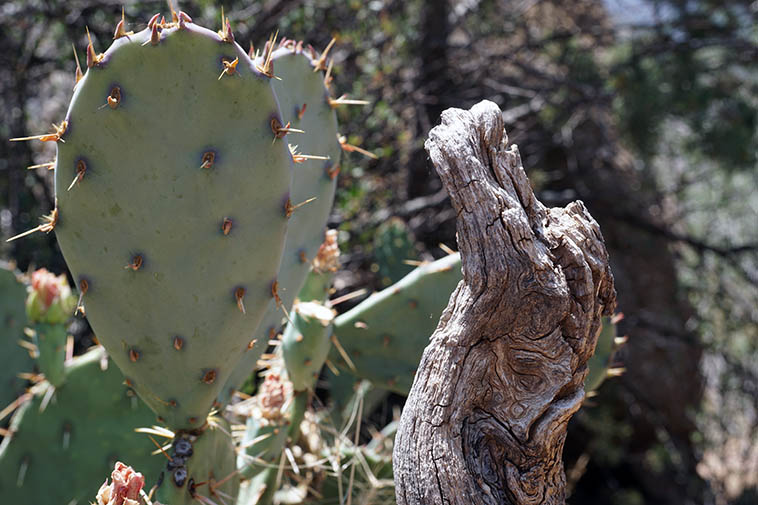 Lifegiving opuntia: this type of prickly pear, with sparse needles set far apart, are what deer like 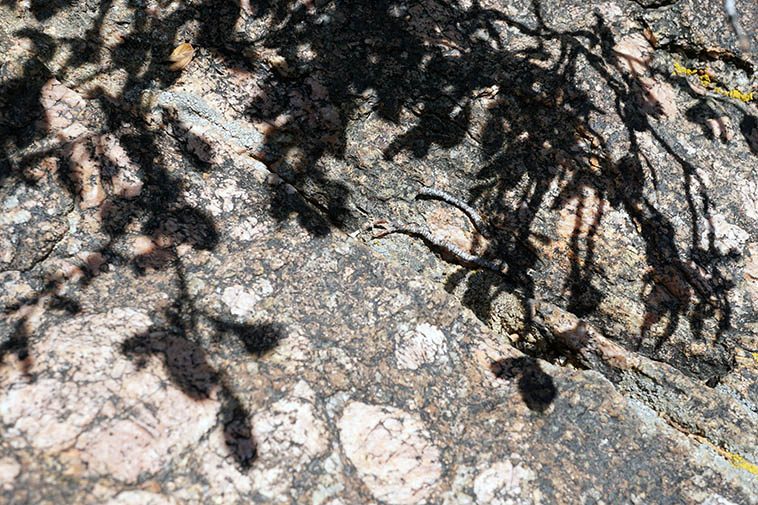 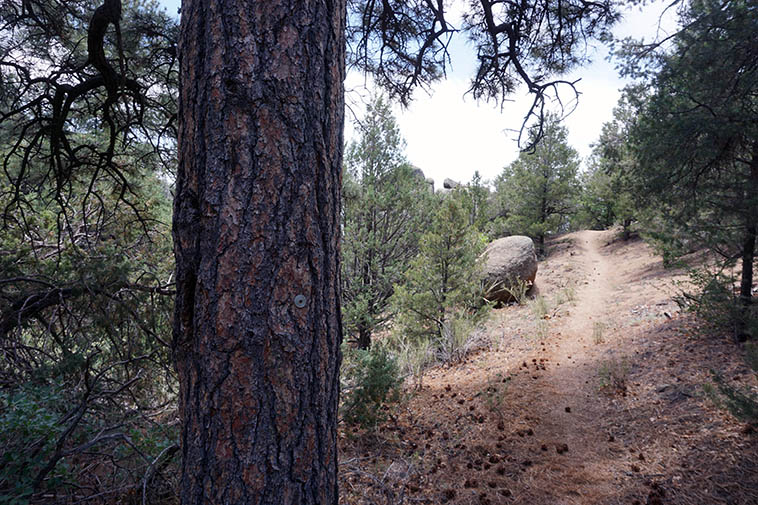 Medallion Tree marking the Pennsylvania Statehood in 1787 when this Ponderosa germinated 233 years ago —- trail at 8,096 feet elevation en route to Oso Pass 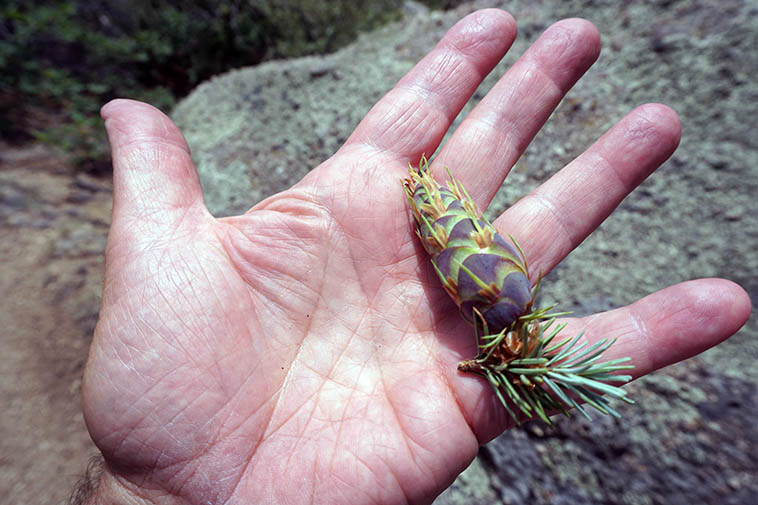 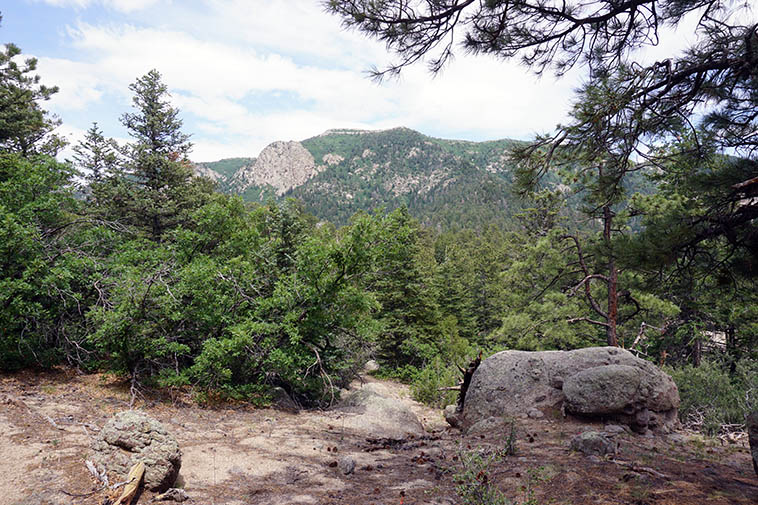 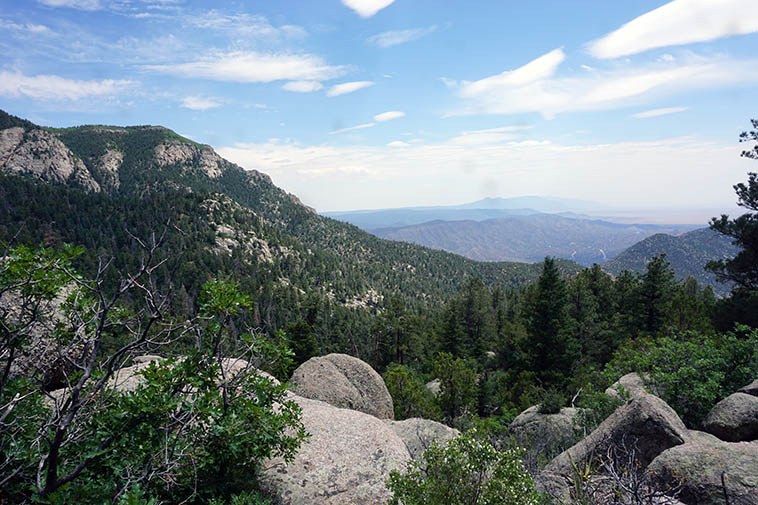 View south out of the southern Sandias 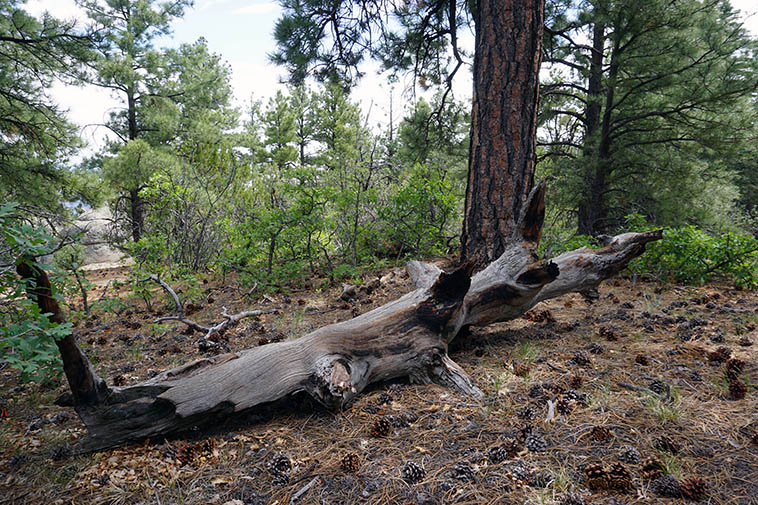 Lightning strike among the Ponderosa up at 8,000+ feet 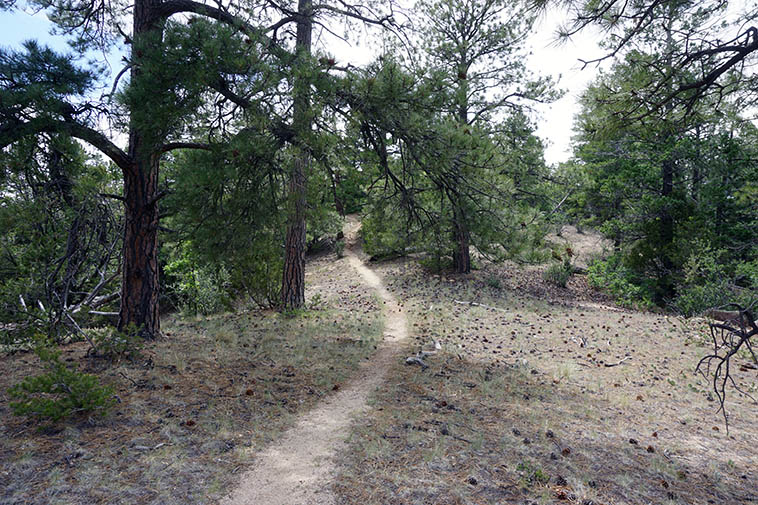 What a way to go:
Wandering the mountains sundazed
Gloriously confused, delirious
That
It was light of the Sun
From which we came
And now the Sun is reclaiming me
The blood vessels in my ankles and hands
bursting in flames, swirling
Universe, thirst and fatigue
Always a galaxy we
Remain 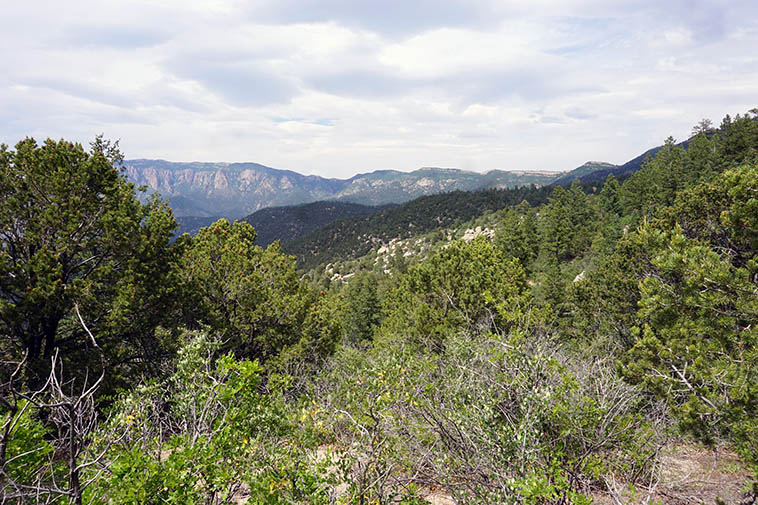 This is the last photo of the day, my confused mind was more concerned with figuring out where I was —- It’s 3:22 according to Time-Date and that’s the northern Sandias across what could be Bear Canyon 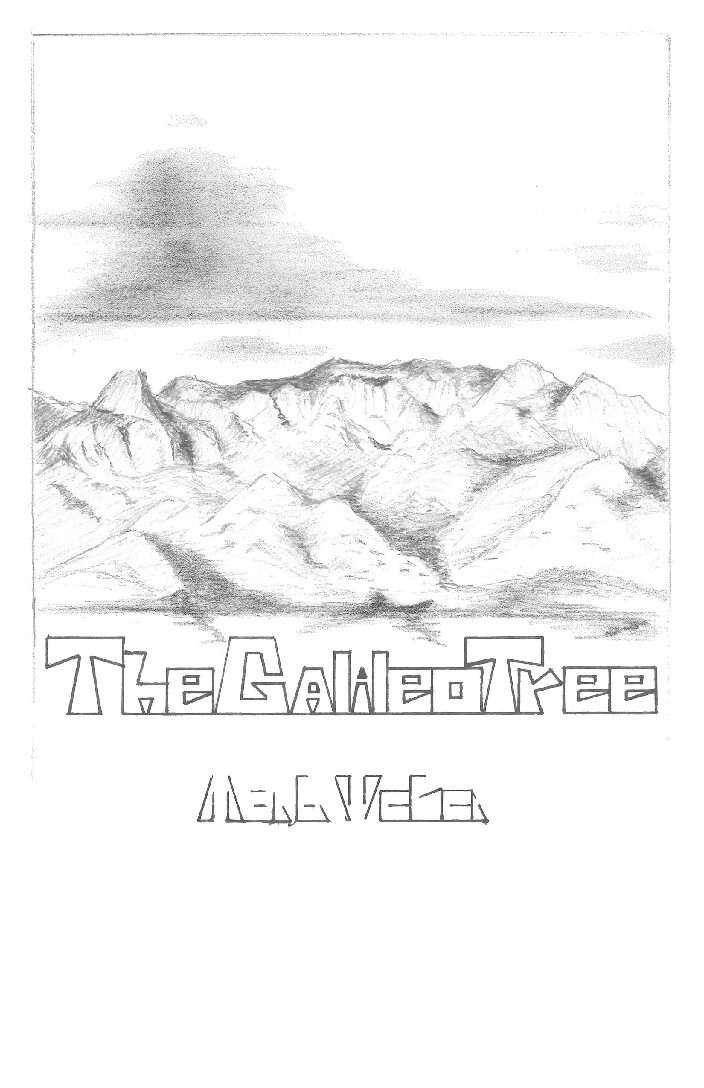 First edition * 300 copies * March 2021 / This is Zerx chap #76 / Printed at Speedzone, Albuquerque / Layout and functional design by Nanette Ely-Davies / Author photo Self-portrait in Sandia Mountains early Spring 2021 / Front cover art & design by Tim Oswald / All doodles by the author / These poems are the book my jazz trio uses in sessions/ Cal Haines (drums) and Carol Liebowitz (piano) —- / Other alliances, with Virg Dzurinko (piano), duets w/ Charley Krachy (tenor), improvisations with Nick Lyons (alto), / deep dives w/Kazzrie Jaxen (piano), and a long-deferred  project with bassist Ken Filiano, as well as further duets with bassist Ratzo Harris, and Andrea Wolper —- All put on hold during this Covid-19/ Safety Lockdown Limbo we’re presently awaiting an end / Some have appeared on my defunct FB page and a few others were read on Scott MacNicholl’s Saturday night radio show Psychedelic Radio Head Shoppe (KUNM), and some others appeared at my website JAZZ FOR MOSTLY / And some were borrowed from YESTERDAY TOOK THE SKY my unpublished memoir I wrote during the early months of the pandemic when we were all asked to stay home / (c)2021 Mark Alan Weber / zerxpress@gmail.com / Zerx Press, 725 Van Buren Place SE, Albuquerque, New Mexico 87108