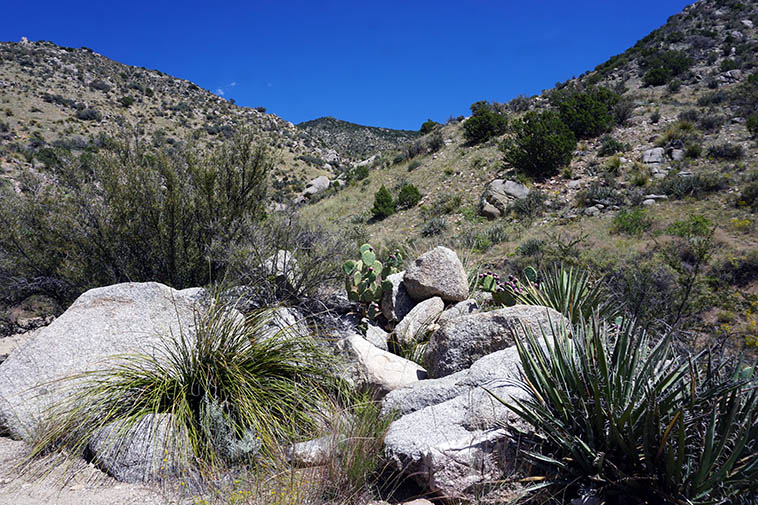 I watched my neighbor this morning stuffing her trash can with dead sunflowers that were potential meal for the birdies, people are so detached from nature, unaware, myself, I’m hoping to encounter a cougar today —- I’ve oft heard it said that in wilderness there is salvation, I know what they’re getting at, although it doesn’t pertain to me anymore than it does a cougar or a rattlesnake —– photo August 23, 2021 —- Ah well, there are plenty sunflowers over here abundant with seeds we don’t pull up till first snow, if then

Some days are better than others
I’m still mobile but the sinew resistant
The gristle that holds my bones together
is wearing down, my muscles are still
strong, I have that to be thankful for
and my hut is full of interesting books
I have a broken toe, Han Shan, your poems
are nimble, which I am not, presently,
even as I am approaching three score
and eight I can still hobble up
mountain trail, neither young nor old
There is humor in this cane
It’s the perfect wobbly stick from
a windfall Ponderosa
Lonely canyon
Further along 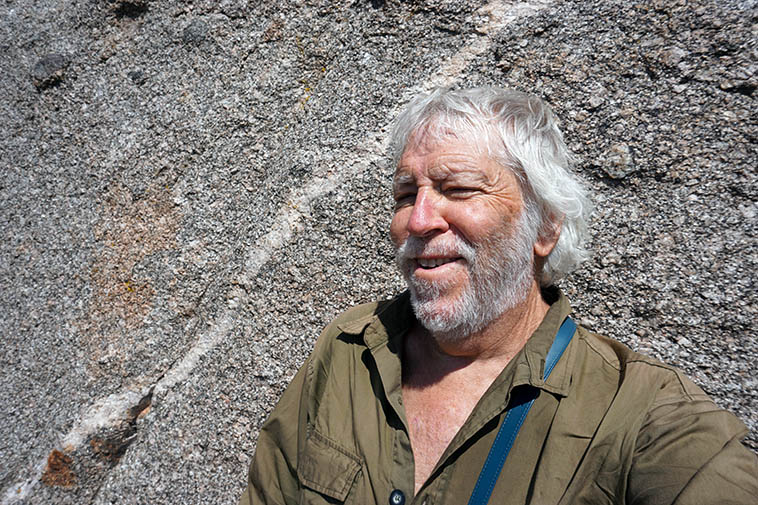 Portrait of Man with Broke Toe just minutes before he slipped and crashed ass over teakettle on Hawk Watch Trail last day of August —- I wasn’t even inattentive, and still it happen’d: wound up flat on my back between two boulders, first thought was, uh? Did I break anything? My right leg sending signals and further down the broke toe screaming, leg is sideways, blood on right hand, but it’s the left arm that’s impaled with cactus thorns in the hundreds, big thorns and those little furry thorns, luckily one packs tweezers & reading glasses in these mountains, but the rush of adrenaline has my hand shaking, I have to wait a bit for it to calm down, I delicately remove shirt, the sandy gravel colluvium betrayed my footing, there’s a ballet to walking stony paths, and surprise/unexpected/unwanted, hands still quivering I pull the needles one by one, even my backpack full of them, finally a half hour later I’m walking again and the Gods are with me, nothing broken 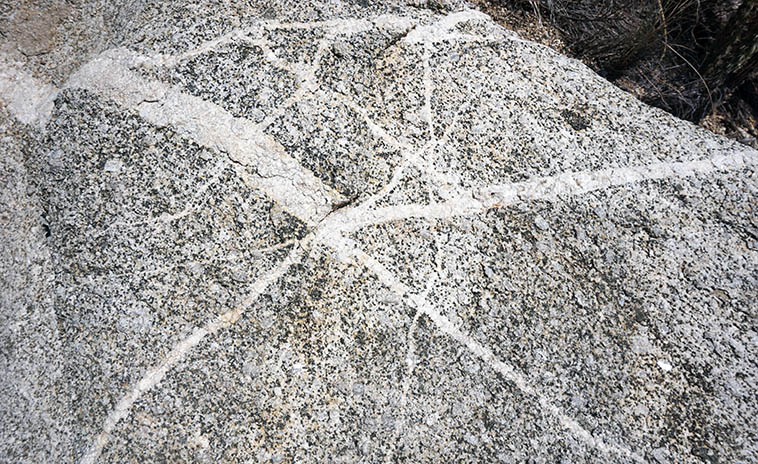 Reading the rocks: This one says Call yr broker, the stock market crashed. Really? Actually, this is granite and those stripes are what geologists call dikes —- When igneous rock is being metamorphosed deep underground it cracks and fills in with quartz, feldspar, mica, silica, Tonka toys, whatever is laying around —- I came across Greenstone filling one dike a few days ago —- Greenstone is metamorphosed basalt, kinda rare, didn’t know I knew that did you? I’m just a hopper full of worthless information, stick around —- photo 23aug2021 Piedra Lisa Canyon 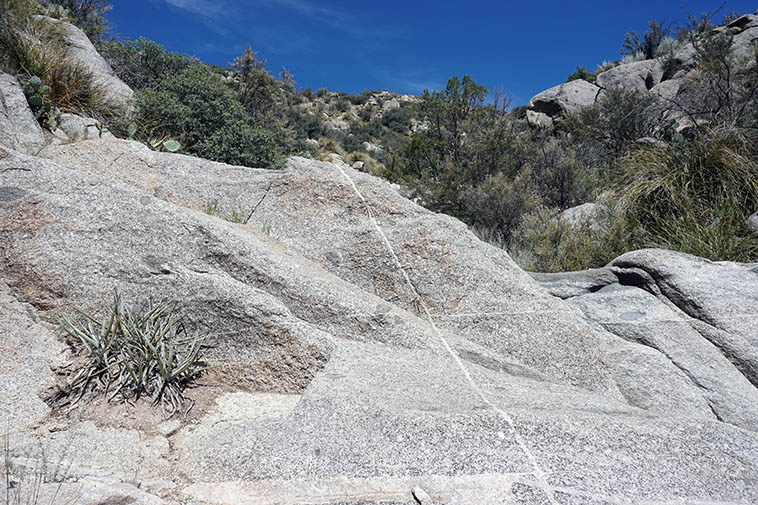 The stasis of 2 in the afternoon
Thorny stark sunstruck barren
manifold life abounds, Rattlesnakes
& Hornytoads, Ponderosa surrounded
by Prickly Pear and decaying deadfall
Jimi Hendrix sure hit the nail on the head
calling this hurtling volcanic slag heap
of basalt and granite:
Third Rock From the Sun
Insights from that good acid of 1967 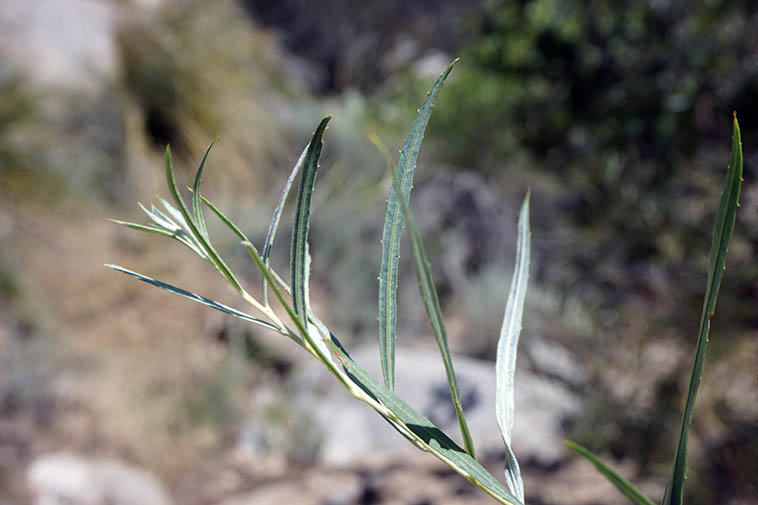 Everything is a poem
It’s amazing this time of year
But then, it’s amazing every time of year —
Presently, here on the 35th Parallel
at 7,000 feet, the sunlight is quiescent
As if the passing of summer is melancholy
The light: opaque blue —- sere
Even the clouds appear wanderlost
as the axis of Earth begins to lean
away from the summer sun 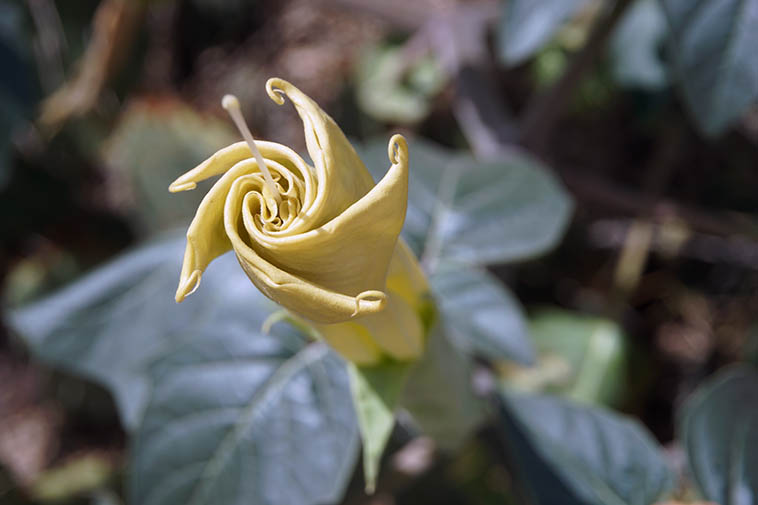 Proof positive that you are in the Northern Hemisphere: Everything spirals to the right —- Sacred Datura will open up at sunset —- This slow walking (broke toe) has brought me into the numinous elemental supernatural world, psychical drop-bombs, crinkling Cottonwood leaves in the afternoon breeze, I have a tea break —- 23aug2021 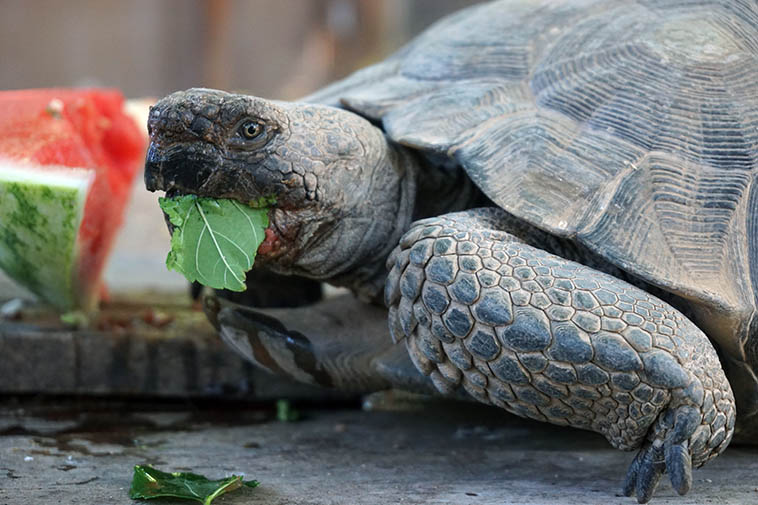 Our desert tortoise loves mulberry leaves and watermelon this time of year —- Curious, as there are no mulberry leaves in his native home of Death Valley, he only frequently will eat his Prickly Pears, which is what wild tortoise dine on 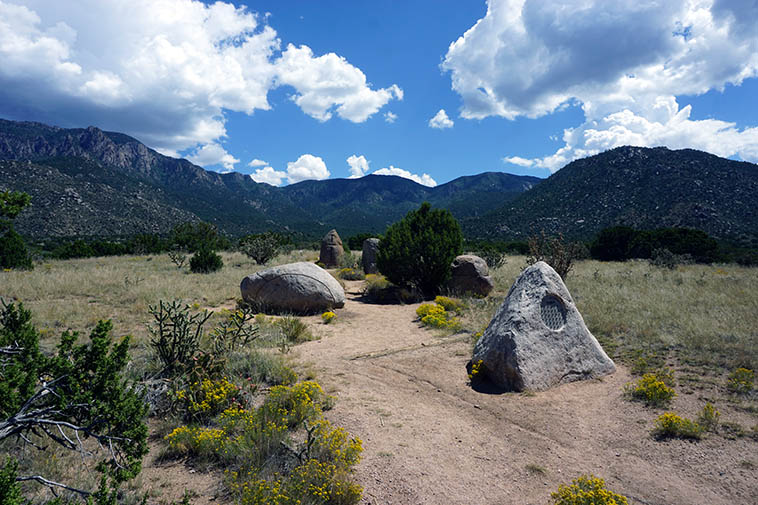 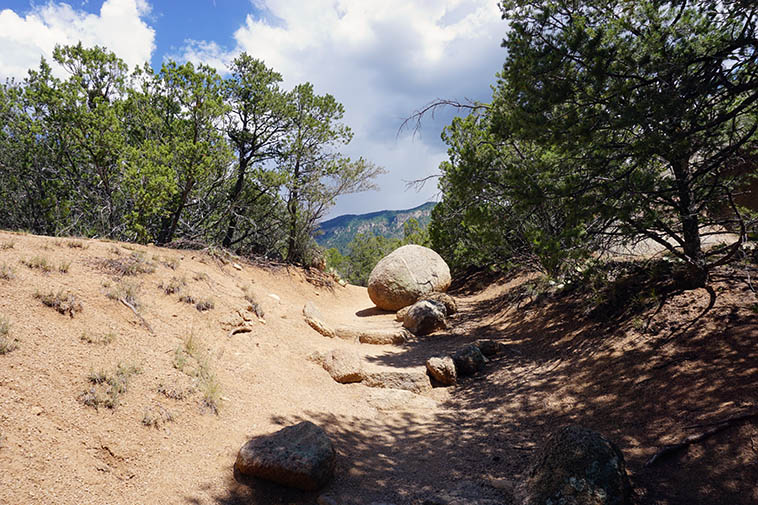 A good hard Old Testament torrential rain could
wash these mountains away,
carry us off like Gilgamesh on the waters of oblivion 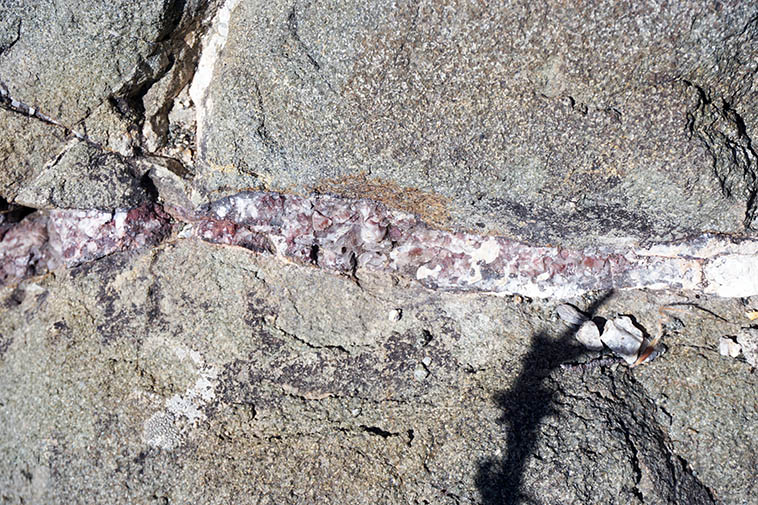 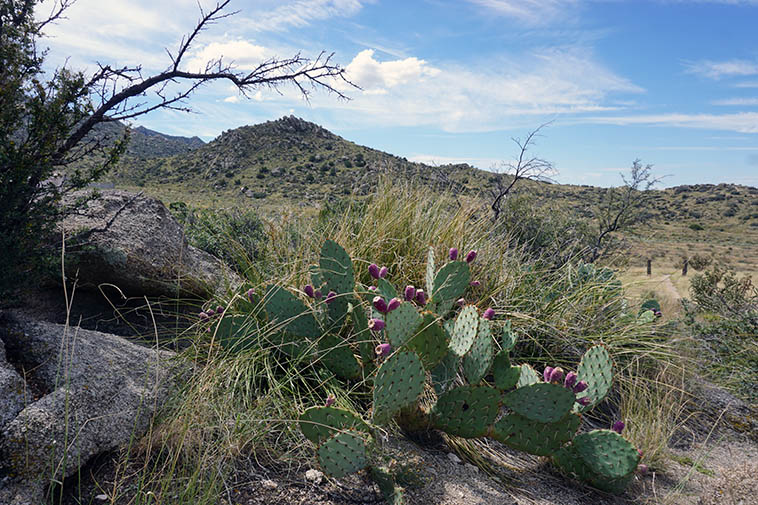 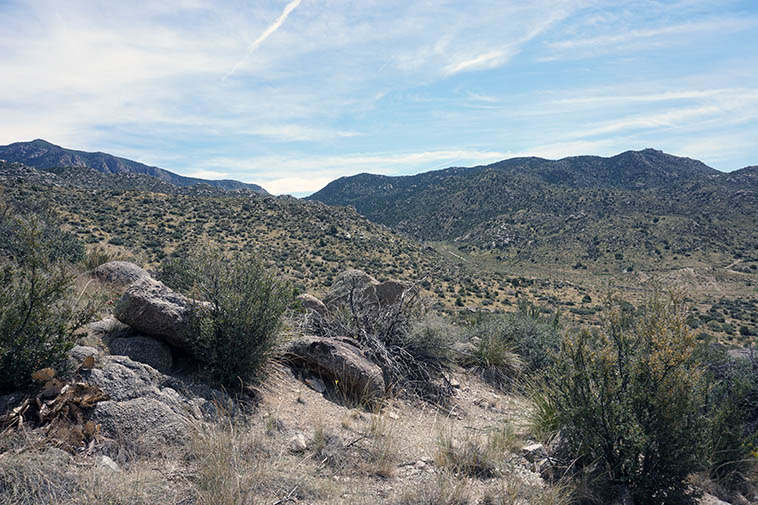 The Treasure of Sandia Madre —- Looking up Embudo Canyon August 2021 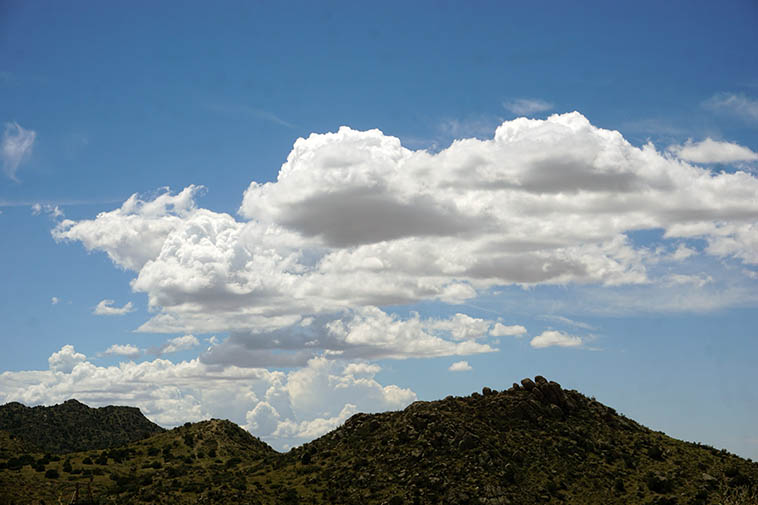 Trail is straight up and slippery with loose rock, the
entire mountain is crumbling, withdrawing, going back from
whence it came, swirling in the universe —-
The path of renunciation, retreat, disengage from
worldly concerns for awhile, relinquish the drama of city life
We are all pilgrims 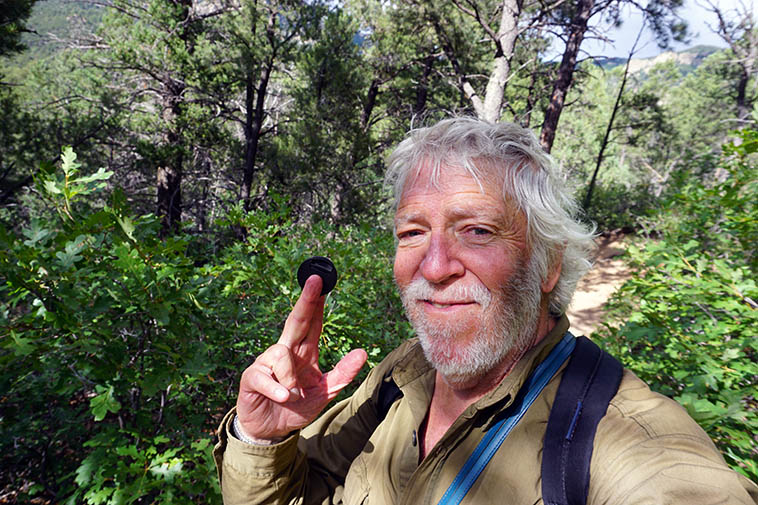 Portrait of Wayfaring Stranger with Lens Cap —- upper Pino Trail, late afternoon —- Went a whole lot farther than I should have that day with my toe still on the mend, I didnt get down till almost dark —- August 26 —- That’s Gambel Oak, Pinyon Pine, & Ponderosa 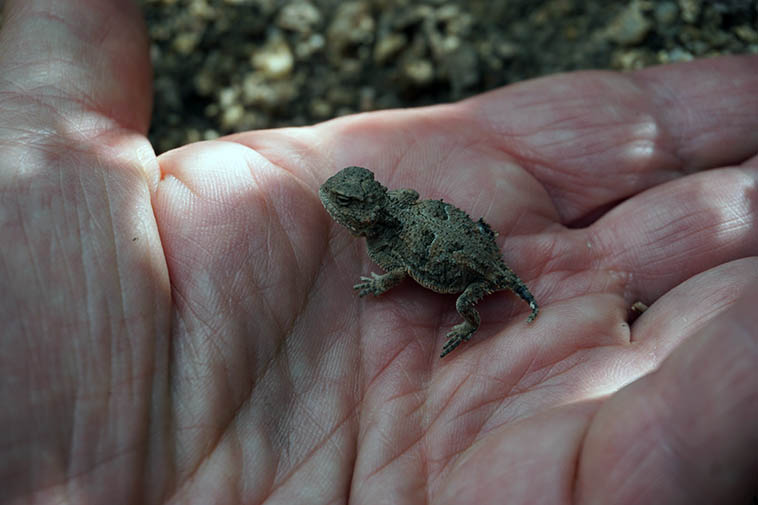 Hornytoad, probably only 3 weeks old —- 7500 feet elevation with the tall Ponderosa —- I always see Hornytoads on this stretch of trail this time of year, there must be a colony — One has to be careful not to step on the babies, they’re so docile, they don’t scramble off like Sceloporus, or that other freaked-out lizard, the Whiptail (I’ve seen Sceloporus all day but no Whiptail) —- They say Hornytoads will spend their entire lives in the vicinity of one ant hill, so, I looked around and of course, as always, there they are, big fat black steak dinners for hornytoads all over that decaying ancient falldown Ponderosa —- Maybe that’s why there seems to be a symbiotic relationship between Hornytoads and Ponderosa? They have a penchant for this variety of ant? Have seen no butterflies today, haven’t seen many this year, I hope nothing happen’d to them in their winter quarters down in Mexico? —- photo on Pino Trail August 26 late afternoon 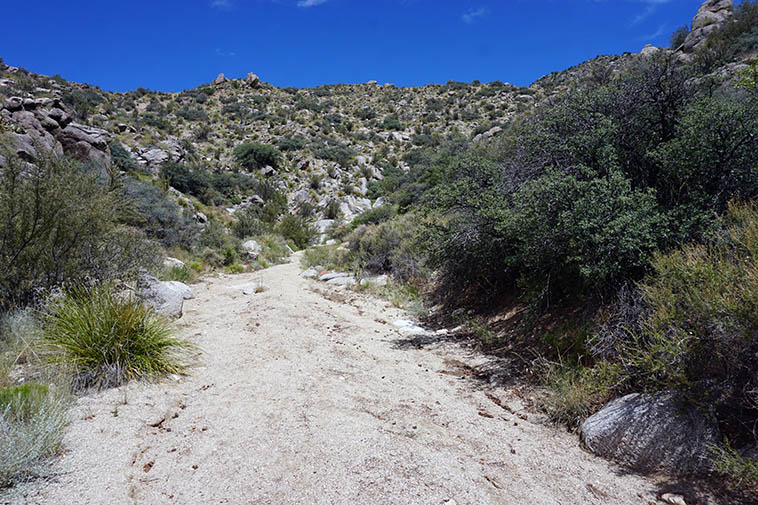 Upper Piedra Lisa Arroyo in the Southern Sandias —- mid-afternoon in late August —- Tiger Swallowtail solitary sailing gracefully down canyon declivity and then fluttering back up, as if looking for something, like a visitation from the spirit world, I watch for some time, float back & forth, impossible to photograph I don’t bother 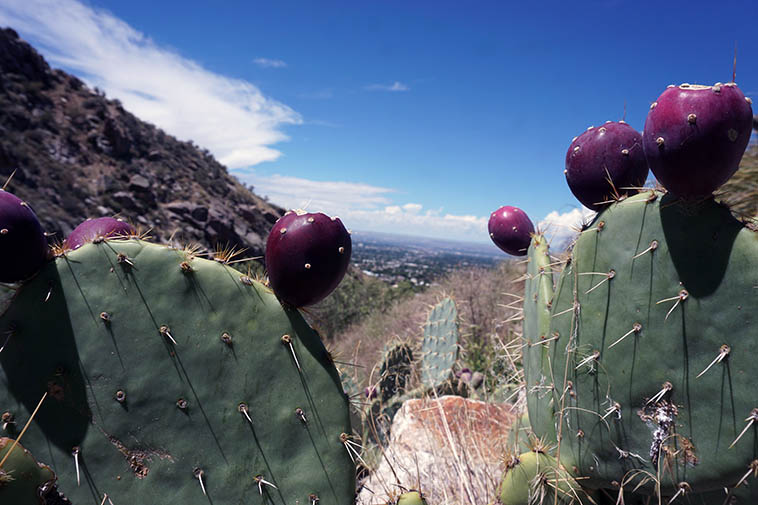 My compadre Brother Tim is going to show me how to eat these Prickly Pear —- I have lived my whole life in the Southwest and have never dined on one of these, one sees jars of Prickly Pear Jam at Farmer’s Markets, but, I don’t recall having that either, innocent that I am —— photo late August in foothills of Sandia Mountains (Tim did the cover drawing of the Sandias for my latest chapbook GALILEO TREE) 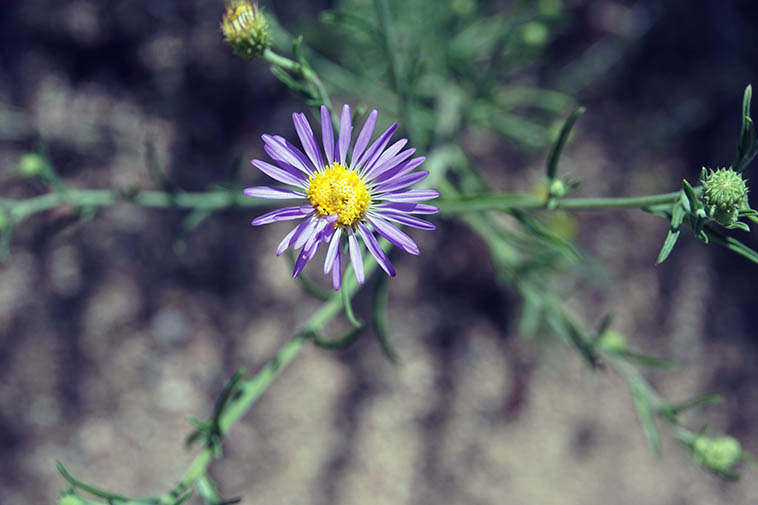 Little momentary episodes of light-headedness are common, nothing serious, it’s the elevation gain up these steep trails, altitude, Janet had a medical term for it that I dis-remember, something to do with aging —- I fainted once, got up too quick, and dropped —- It’s all part of it, if you want to hike these craggy mountains —- Time for lunch, in the summer I look for shade, in the winter I look for sun —- The other day on Hawk Watch Trail I find shade under a pinyon, but the gnats had staked their claim first (gnats problematic this summer), so, I wonder if they’d pester me if I moved into the sun? I’d rather not sit in the direct sun, but I need to shovel some coal into the burner —- I’m not much for breakfast, one of my bad habits, I had an apple earlier, hard to find shade on Hawk Watch, by the time I sit down to have a bite I eat like a blue ribbon hog, even as I’d like to take a few pounds off, but no hope in that after sardines, mixed nuts, prunes (2), dates (3), a few slabs of jerky, can of V8, and to top off, a CLIF bar (Crunchy Peanut Butter Banana w/Dark Chocolate) —- After all that I loaf around reading from my revered Shigeyoshi Obata (1922) translation of LiPo 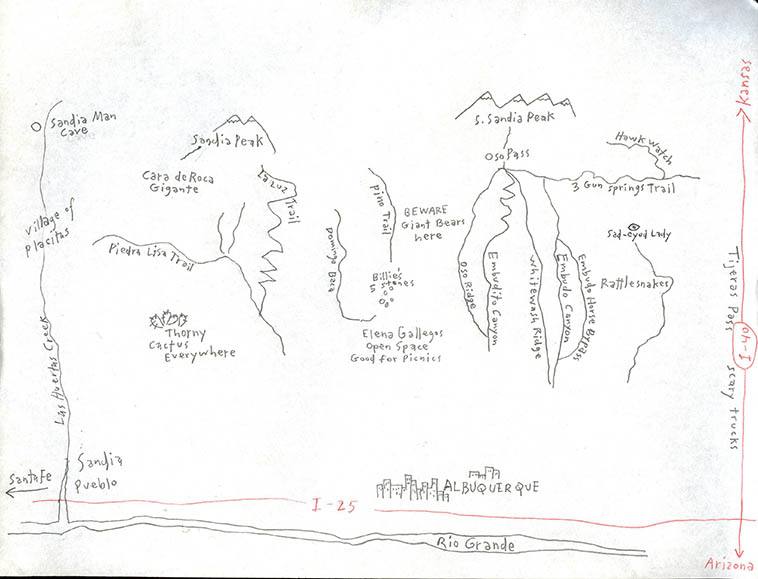 My drawing of the west face of Sandia Mountains 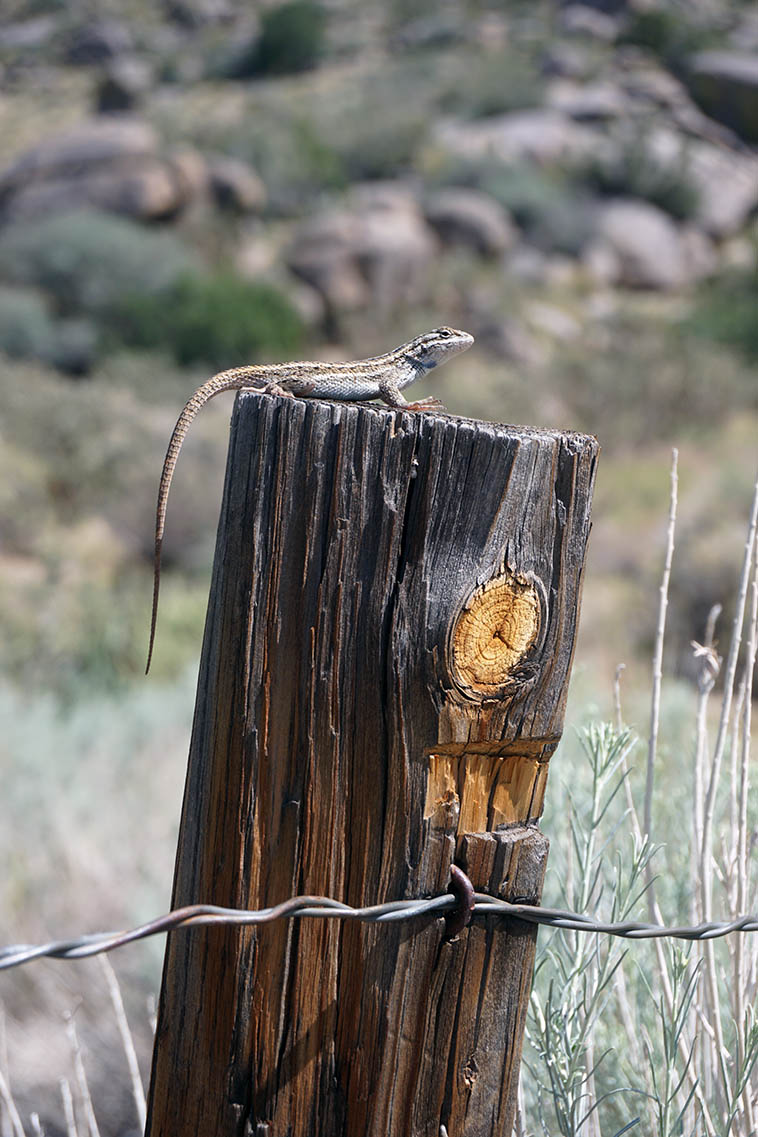 Janet brought my coffee
saying “There’s a baby dove asleep on
the telephone wires”
Over the past week I’ve been spending
my coffee time in bed reading and looking at photos
A BOOK ON THE MAKING OF LONESOME DOVE
She says, “Do they do that? Sleep on
the telephone wire?”
I say “It’s hemispherical sleep, one half
of the brain sleeps while the other half
is on alert. There’s a big fancy word for it
that I keep meaning to memorize so I can
impress people, but so far it hasn’t
taken hold”

Lizards do this as well. Unihemispheric slow-wave
sleep (I hadda look it up).
Sceloporus on a boundary fence post. Sentry.
When you see lizards doing push-ups, up, down,
up, down, the theory is that with eyes on opposite sides
of the head they do not have stereoscopic vision
which is how homo sapiens discerns depth of field —-
Lizards change position, up, down, up, to
enable depth.
They are “opportunistic insectivores” Aren’t we all?
Four years is lifespan.
Repopulation is a reproductive cycle that can
start at ten months —- Females lay up to ten eggs.

All the things yr suppose to do
Are done
Seemingly inconsequential
Even as they shore up yr life:
Wash the dishes, bring the laundry
in, teapot whistling, feed the cat,
make sure the turtles have
water, respond to emails (maybe
later, usually later), see about
provisions for today’s hike, nothing
tedious about all this and I hate to
use the word mundane, sounds so
pejorative for these activities
These simple things that
Somehow you know how to do, you
like yr life so you do them, it’s
the Sunday poets
who blabber on about the nobility
of simplicity you want to douse
with a water hose, ah well . . . .
Only takes 15 or 20 minutes
and now you can sit
have a cup of tea
with a book about trees
(much too early to read the newspaper) 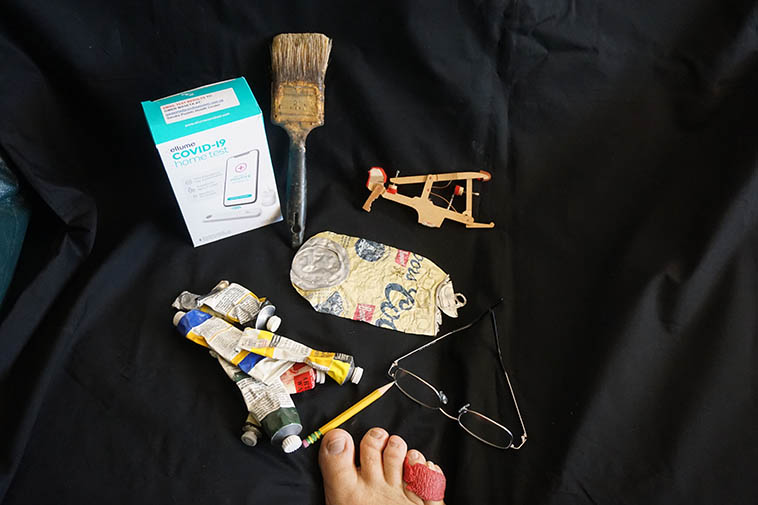 This is how one occupies oneself during these Covid Lockdown Days —— I’ve actually been thinking about the arrangement for this Still Life for weeks and collecting elements for a couple months ———–SO this is just a preliminary shot, BUT it looks much better than I thought it would! —————– I still haven’t figured it out, yet ———— The versions with my splinted toe harken back to a Still Life I did in 1970 where I had a carburetor and some gears and had my brother Craig put his foot in the photo ————- So this is a Study for Still Life (work-in-progress) This preliminary shot really makes you think: What exactly makes a Still Life tick?

1. Janet has to test herself regularly for her doctoring job so these boxes are laying all over the place
2. I used to drink Coors —– Found it up on the trail in the Sandias
3. I actually threw those tubes of dried-up paint out but retrieved them for photo props
4. That piano hammer comes from the (recondition’d) Outpost Performance Space Steinway, SO, a LOT of great pianists have played it
5. I was a house painter 1955-2010ish ——— that’s a well-used oil stain brush, a beauty
6. In other versions of this projected Still Life I have 3 dozen pencils that are only 2-inches long (I’m a person who writes draft in pencil)
7. And those are my reading glasses, added at the last minute
8. I broke the little toe on door frame while on telephone with Jesse Sharps barefoot 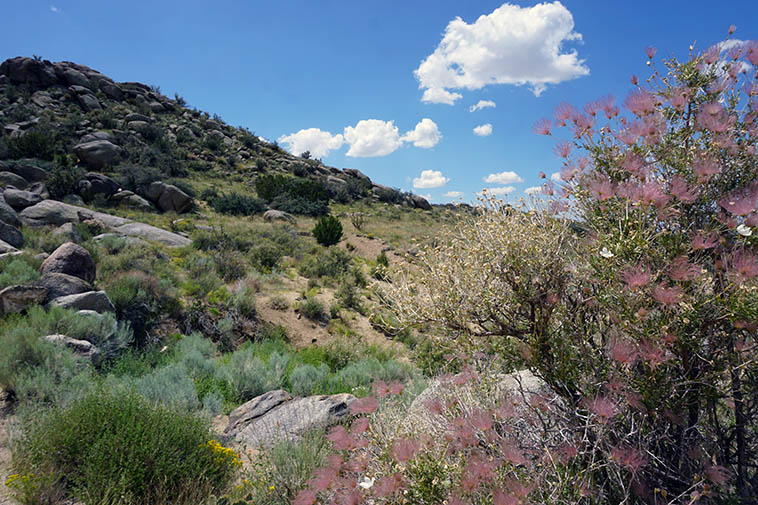 Apache Plume, ever-present in the midday cosmos of August