The universe is expanding
exponentially
at such speed unfathomable
to our minds —-
I think this while pulling on my pants made of nylon
my usual reticence regarding
inorganic anything synthetic has changed with
these amazing pants, good
in all weather, Michael Vlatkovich asked me
yesterday “Should we get frozen and wait for better times?”
Also, emerging from sleep I have
Jerry Garcia’s speedy line from “The Eleven”
going around my head 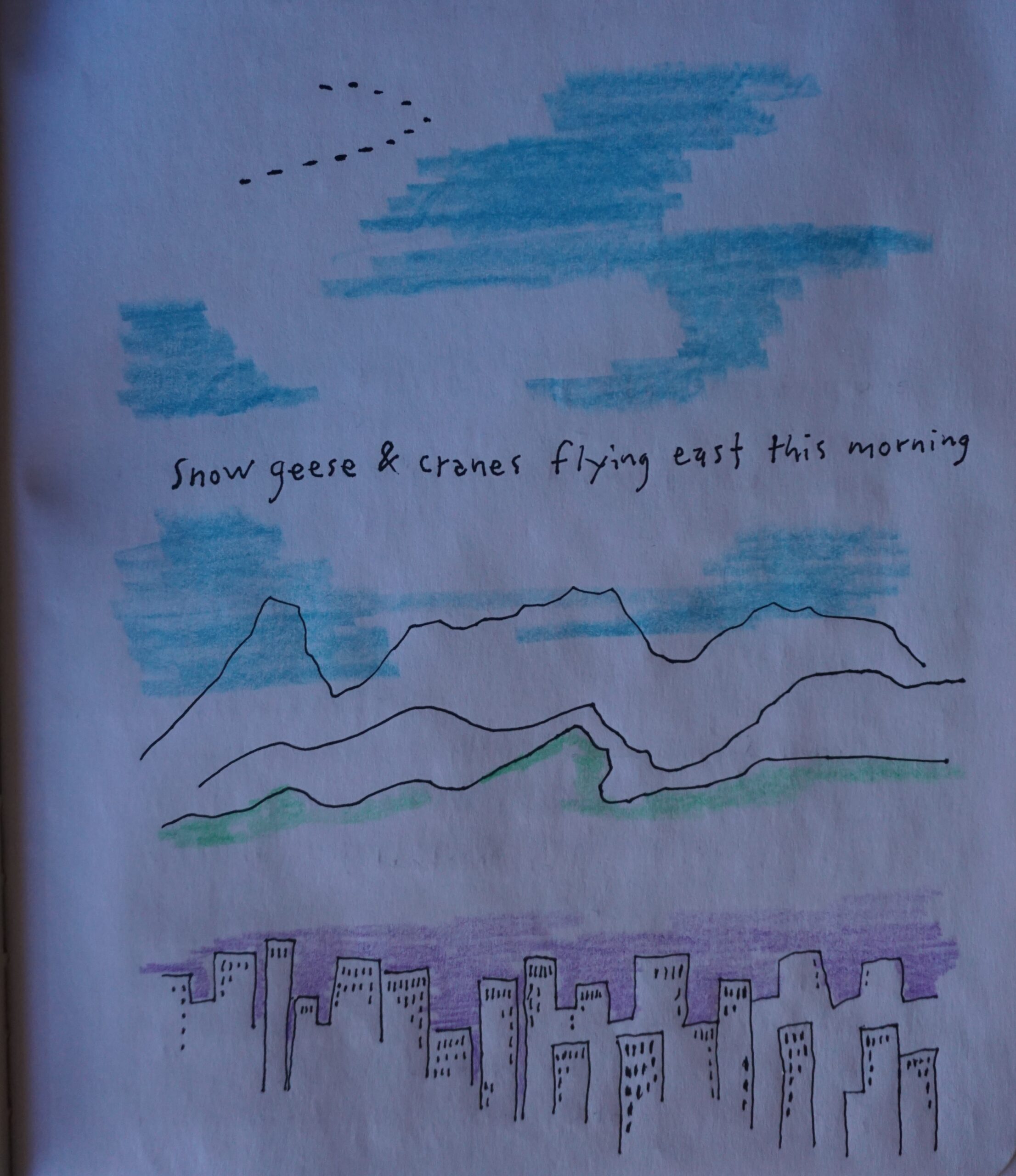 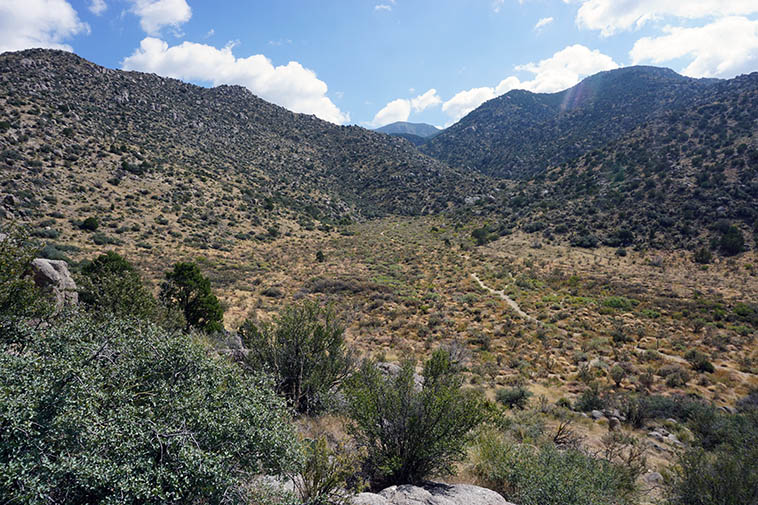 Embudito Canyon looking east —- That’s the arroyo trail you see in this shot —- There’s three trails up this canyon, the one I usually take is on the left (north) flank in this shot, and you can go all the way to South Peak if you’ve got the mojo (I never have) —- Last time I made it to Oso Pass it took 4 1/2 hours and I was humping! To go the last mile & half would take me another 2 hours maybe more ———— I’ve been hiking Embudito for 30 years, it’s about my favorite trail, if you visit, I’ll take you up, it’s magnificent, we can go to the Ponderosas and Barefoot Arroyo, that only takes 2 1/2 hours (at my speed)(I was only humping that one time as I wanted to get where I was going, had an objective —- Normally, I just meander take my time, loiter, stare at bugs and little things . . . .take my time, no big rush to get anywhere, read old Chinese poems written by mountain hermits) —- Sandia Mountains 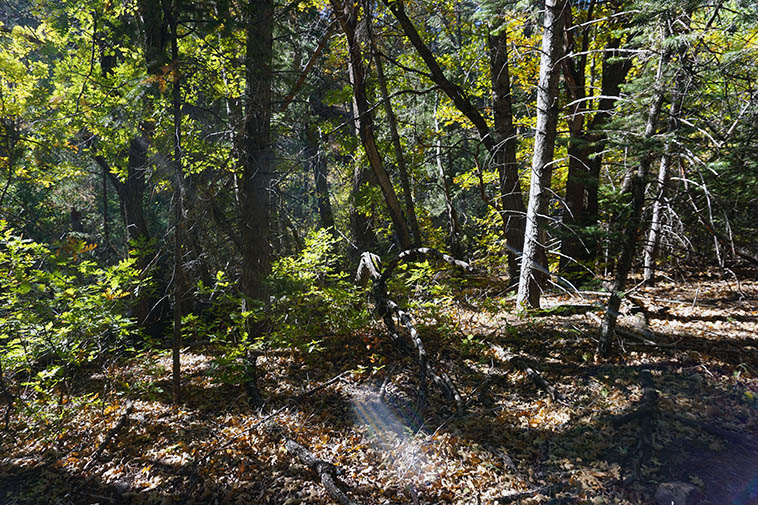 That old familiar sense
that you are being watched
That more than just being alone
is at play
Pervasive, non-threatening, everywhere
Multiple, entire, calm
Distant memory
(Someone told me the other day that fear
is our strongest most usual emotion)
It’s probably the trees
It’s an emanation
Pine cones along the trail, a deer path,
unnamed by man this deep gorge
mountain canyon forest
Rounding a bend I scramble up
to a ridge that looks out
over the treetops
Views of where I came from

I have to turn away when I see trees
being mowed down on TV
These guys with their big trucks & chainsaws
embolden’d by their beer, speak of heroics
Not much removed from the Beowulf nights
Their senses dulled by drink, they
no longer hear the trees 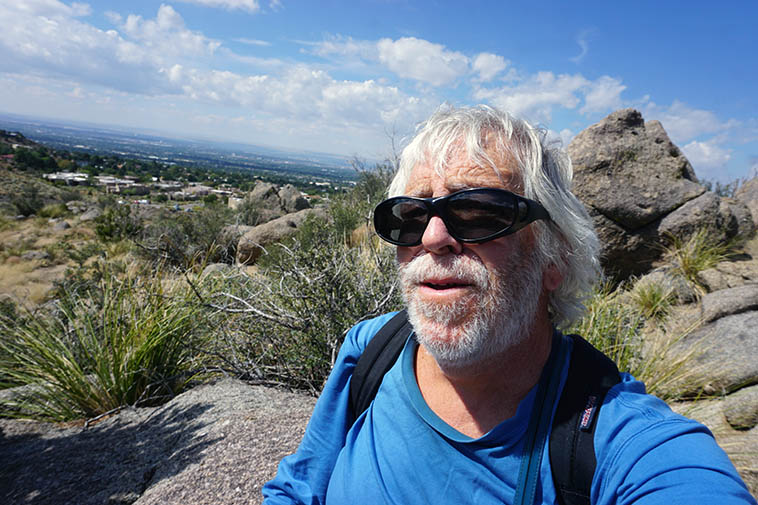 Long forgotten:
A thing exiled so far from memory
Only our molecules recognize it:
How our vibrations carry over
inter-react, revolve, immutable
self-same 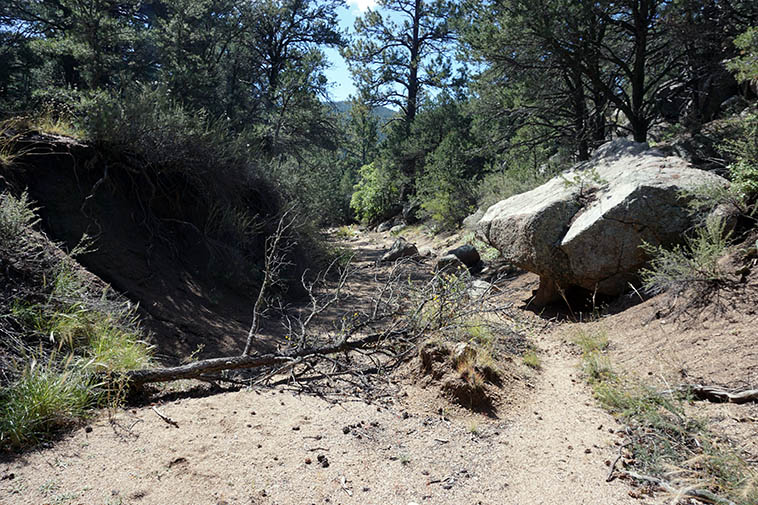 Barefoot Arroyo ——- I named it this because I like to walk barefoot up this section —- This is actually the top end of Embudito Canyon if you want to be specific, but even the top end has two spurs, and I’m still pondering which is which, “Will the real Upper Embudito Canyon please stand up!” For years I used to lunch here, waste a couple hours loafing and reading, listening to the Ponderosa, or napping, doing nothing of import 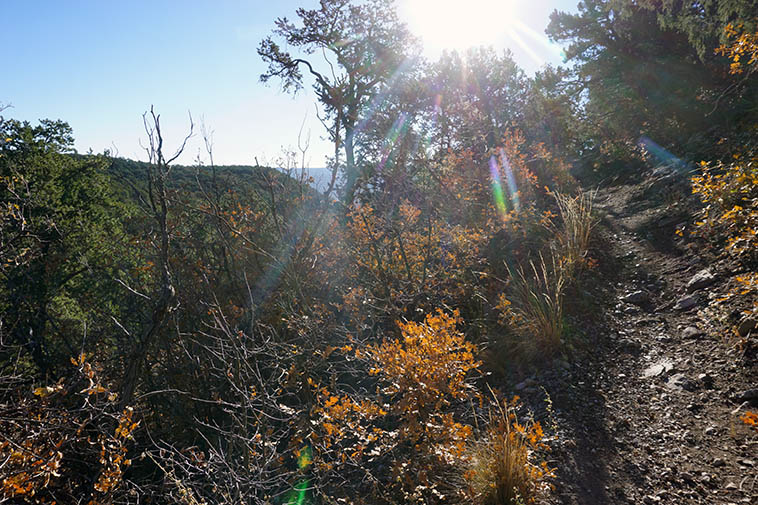 In the upper reaches of this canyon
before the climb to the high fells
the trail turns even further inward
cutting along a steep escarpment
It would be fatal
to lose your footing
The forest is so dense
sunlight cleaves the overstory
only in momentary shafts
like diffraction through a prism
Makes one think of Lothlorien, where soon the elf queen
Galadriel will reveal herself
among these tall mallorn trees 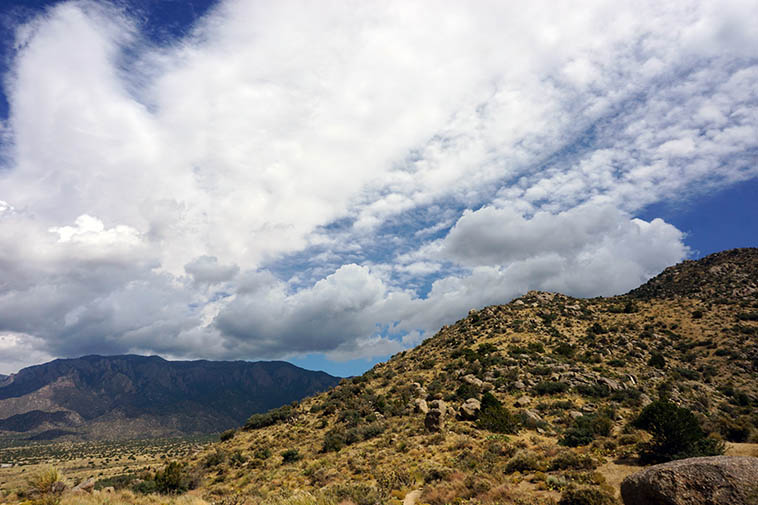 What matters dusting & sweeping
yr humble abode when there’s a Black
Hole swirling at
the center of the Milky Way?

Even though many million years hence
the whole idea of the universe collapsing in
on itself petrifies us busy insects on this
little inconsequential planet, being swallow’d
eventually by Sagittarius A*
the black hole Lucifer at the vortex of it all —-
We water our petunias in the windowsill
and pray to our feeble gods that it isn’t so,
but this Dark Star is bigger
than God

Too apocalyptic to imagine
the cataclysm of two Black Holes
colliding

Eventually, everything, and I do mean
everything, will be sucked into a mega Dark Star
collapsing atomic micro-infinitude
subtracted negative cosmic time-space
no bigger than a golf ball —- Is it
possible this ultimate compression
can explode Big Bang
all over again
and how many times previous?
Just as the ancient Vedantic priests
have been saying all along —-
Wheels within wheels 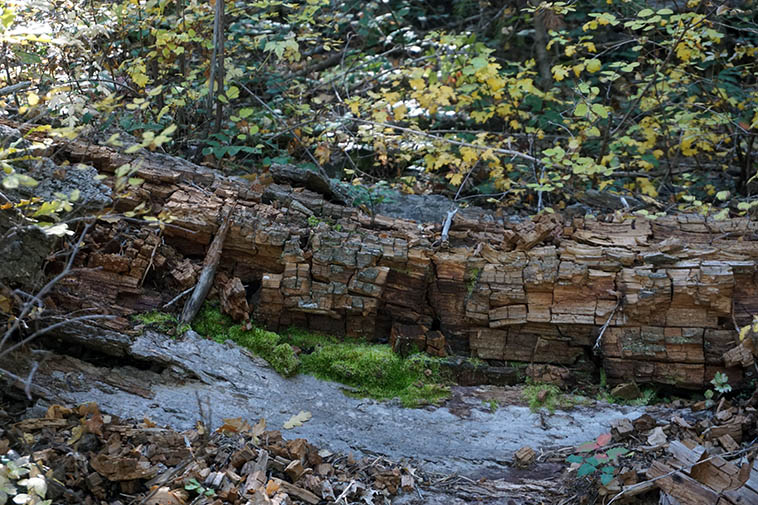 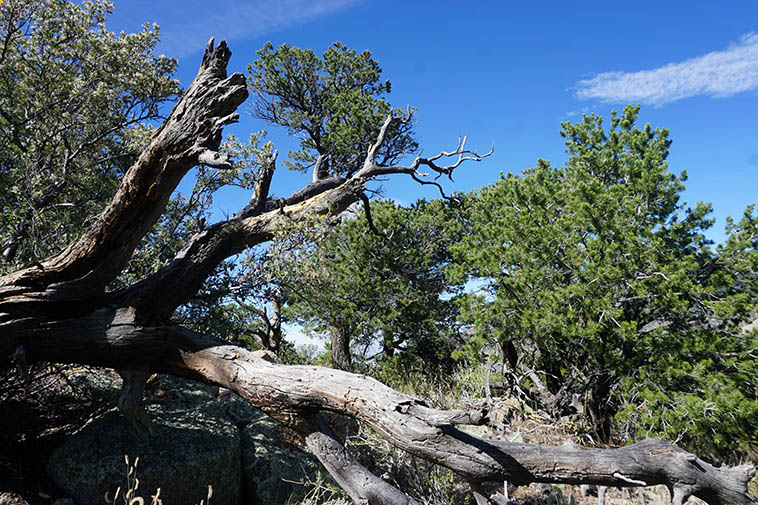 This is way up on the ridge I call Trail to the Land of the Dead —- a remote trail not on any maps, where you’ll find ten acres of dead Pinon trees, died during the drought of early 2000s 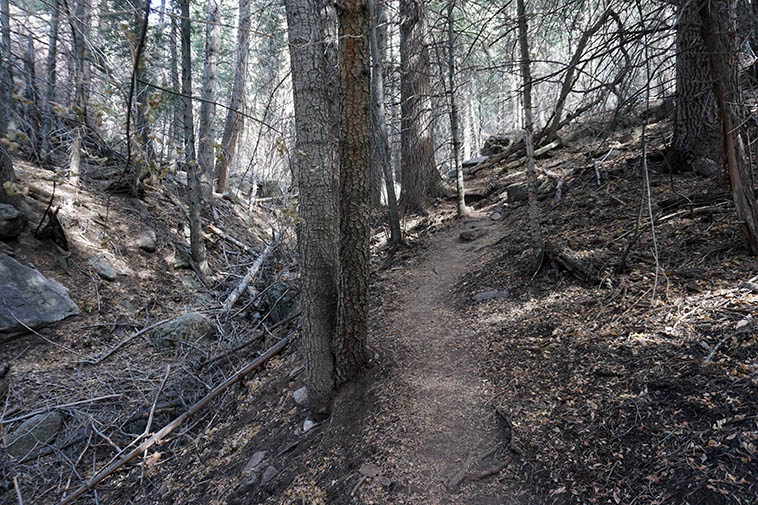 The upper Domingo Baca Trail becomes the TWA Trail, diverts up a steep side gorge, en route to the 1955 passenger plane wreckage —- About ten people lose their lives in these mountains every year but 1955 you can add 16 to that 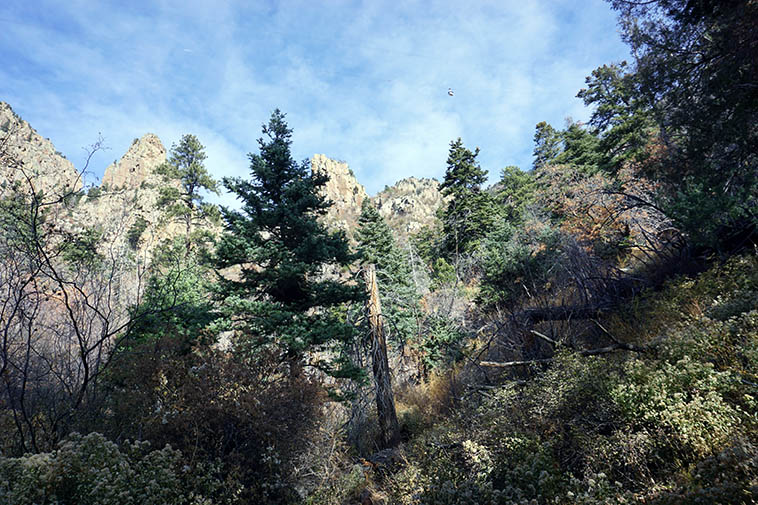 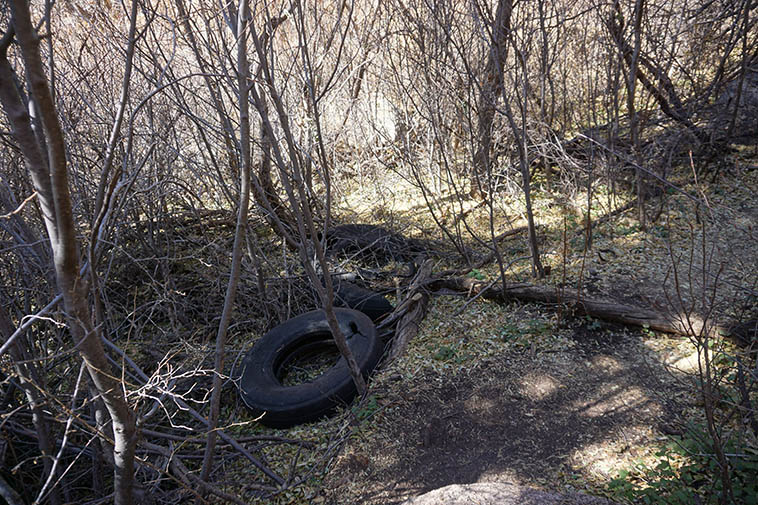 Grim reminders of that star-crossed day in February 1955 early flight fog & clouds & faulty guidance indicators —- Pieces of the plane are scattered all up this gorge at 8,640 feet 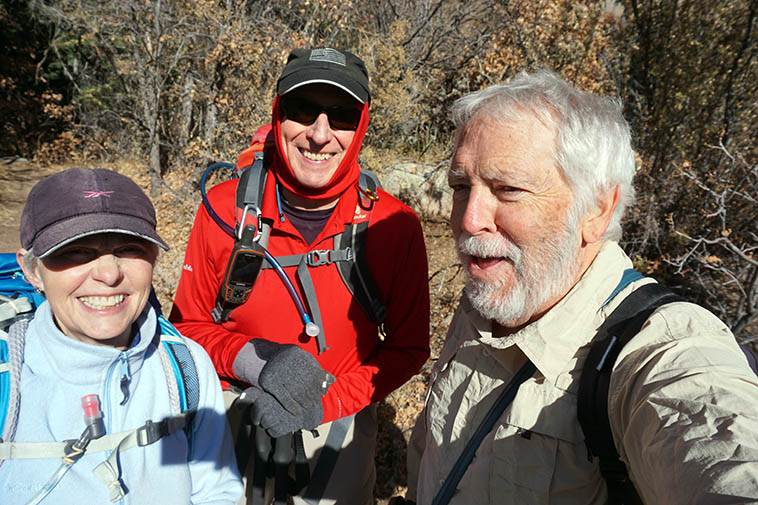 We’re on what I have named Fendlerbush Ridge in TWA canyon —- Lee Ann, Neal, and myself —- This is an “unmaintained trail” as the Forest Service calls it 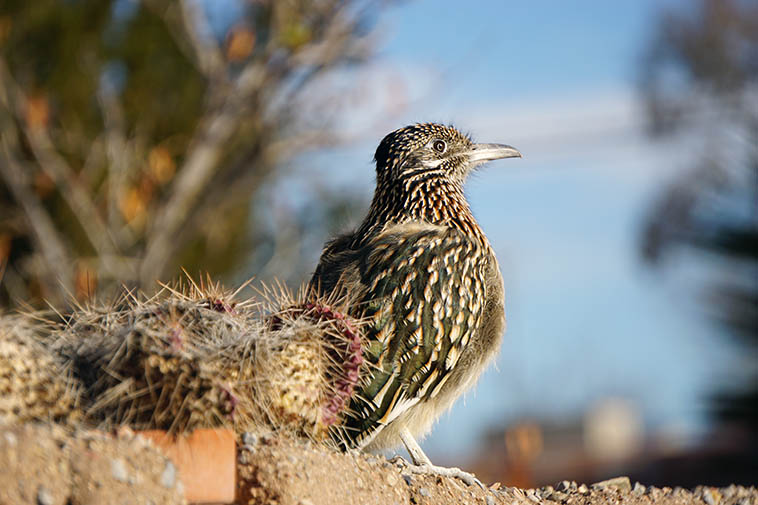 I put on my 210mm lens to get this monster perched on our adobe wall out front —- Only the tourists love Roadrunners, we in the Southwest have their number —- This one is trying to figure out how to get into the Cholla cactus to kill our family of Curved-bill Thrashers —- Our turtles are now in hibernation so in no danger from Tyrannosaurus Roadrunnerus 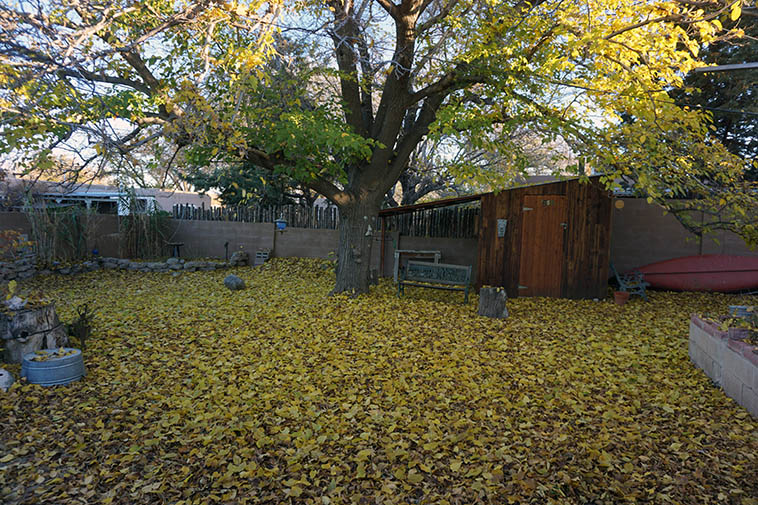 Our backyard at 725 —- Normally, (normally?) the Mulberry loses its leaves in a two-day drop in mid-November when there’s an overnight freeze and then the warm morning sun hits and the green leaves fall in a dramatic torrent —- So, this is very odd, to see yellow leaves, that are falling slowly over the course of a few weeks —- Last year half the leaves never fell at all 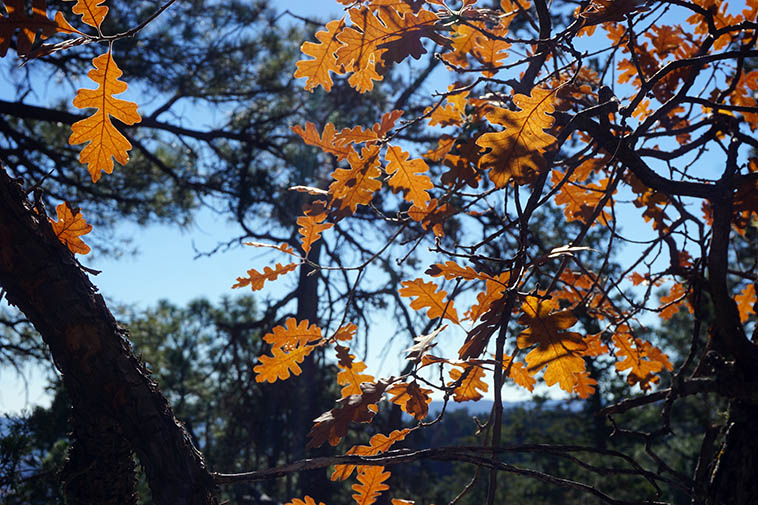 Gambel Oak —- two years ago I bought a couple books on harvesting/preparing acorns, but it has not been a good mast year since —- Not uncommon, oaks do not always produce acorns every year —- I’m a fan of the theory that Homo Sapiens has been an acorn eater for 100,000+ years and being that I’m a Homo Sapien I thought I’d get me some, known by the Greek word Balanophagy > balanos = acorns; phagy = stuff your face 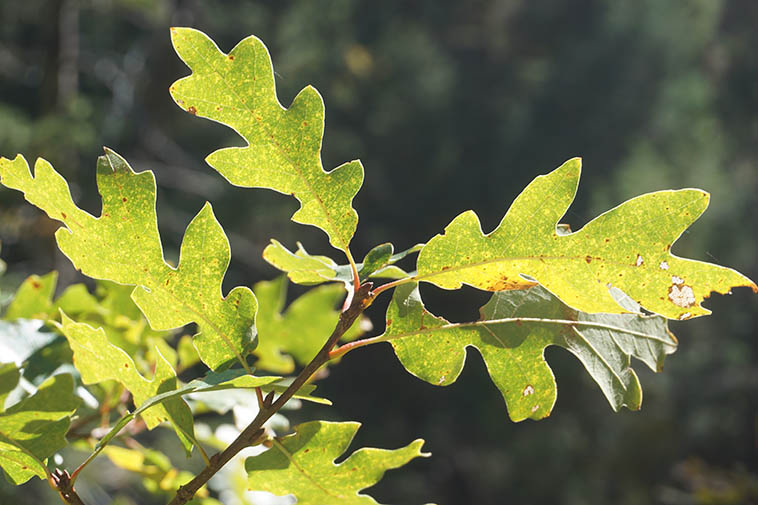 My poor doctor comes in all serious
and concerned, I think she mistakes me
for a sickly person, “How are you doing?” with such urgency
leaning in, that I shrink, and muster a weak “I’m fine”
“Are you really? What’s going on?”
I clear my throat and put a little more backbone into it, “I’m
fine, just fine, really —- In fact, I’ve forgotten why we scheduled this
check-up so soon after my last?”
She’s young and exuberant about being a doctor, says that she
prefers to see me at 6 month intervals, even as all my “stats” (BP 130/82!)
look good —- We chat about all the latest health trends, things you hear
on TV and so forth —- As I leave she says I’m healthier than all
the young people she sees, and adds chirpily “You’re the healthiest person
I’ll see all day! Whatever you’re doing, keep it up!”
I tell her what she already knows, that it’s luck and genetics
and sorry to be so boring, I’ll try and drum up some malady for
our next check-up!
When I explain how out-of-breath I get on trail, not sure if it’s age
or Covid-damaged lungs, she said: “Weakened lungs are not
part of aging, it’s definitely Covid-related” 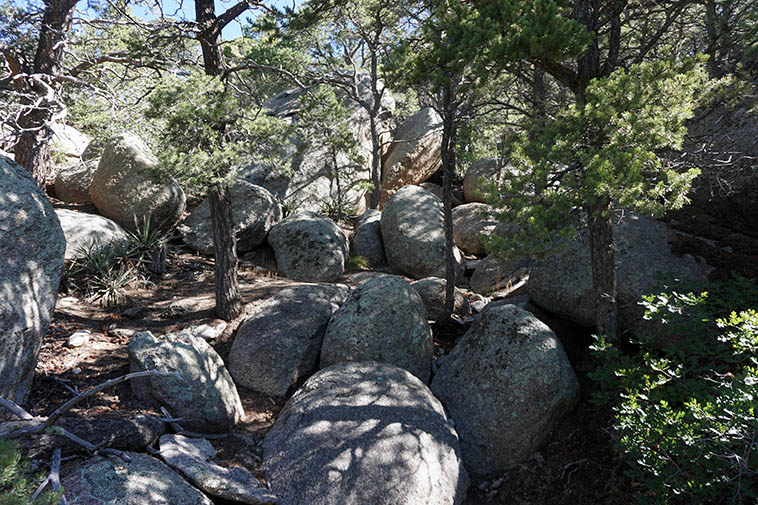 It wasn’t summer no more
Chilly but with a light jacket it’s
good to be out
Up a trail on a ridge following
sandy arroyo below
A pinon or juniper here and there
mostly Mountain Mahogany
and grama grass, boulders
strewn helter skelter  from when this land
lifted up ten million years ago
Prickly pear and cholla and yucca
This trail could use a good name someday
We all need new names, nothing overtly
revealing or narrowly consigning us to a script —-
Make us mysterious, following a trail into unknown
wilds, birds flickering in the underbrush,
coyotes howling in chorus, cougar tracks, sere-blue
sky with dark clouds far west, white billowing fluffy
clouds churning above the crest where we’re
all headed
Tocking along with our walking sticks 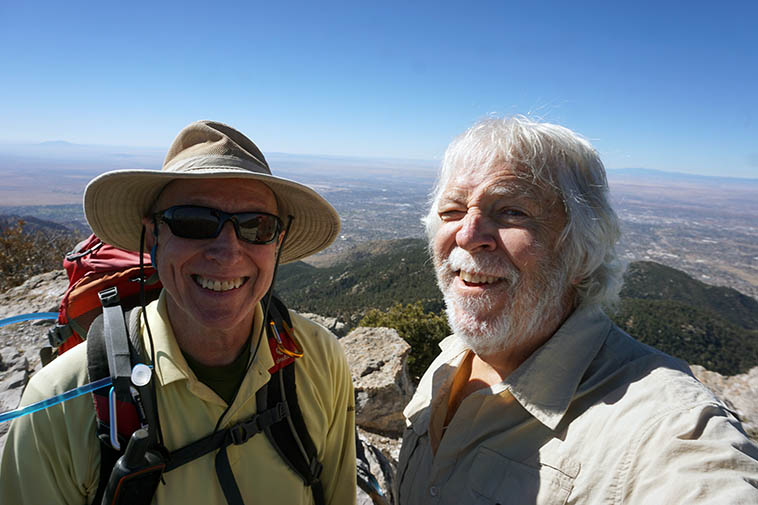 A major triumph for me this day —- I’ve been looking at South Peak for 30+ years wondering if I’ll ever make it ——- North Peak is relatively easy 2 or 3 hour hike from the Crest parking lot (see Sheila Jordan’s album THE CROSSING for a shot of Sheila standing at 10,679-feet at the Crest) but South Peak is a whole other basket of eggs, I’ve never made it in several attempts, so I asked Neal to take me, and he’s a guy who gets where he’s going! Here we are on top, yahoo! I picked up a souvenir limestone for my reading table — It was almost 9 hours with 3310-feet elevation gain, quite at the limit of my abilities these days, I was fairly exhausted, had to take 2 Aleve that night to quell leg cramps 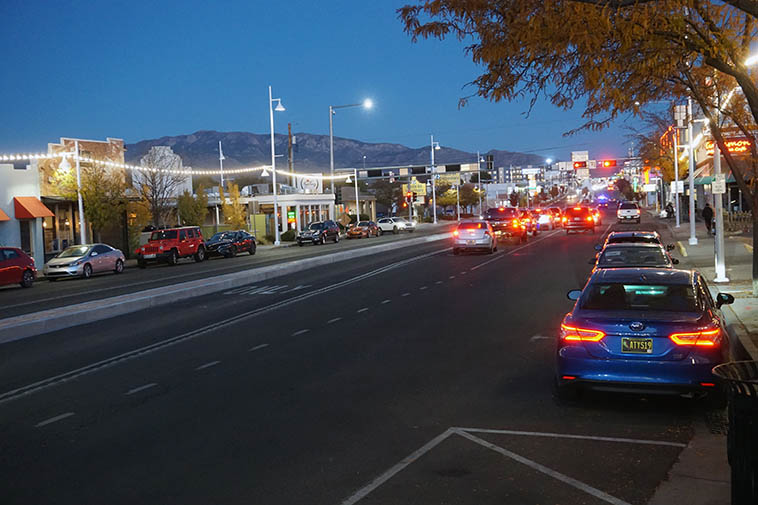 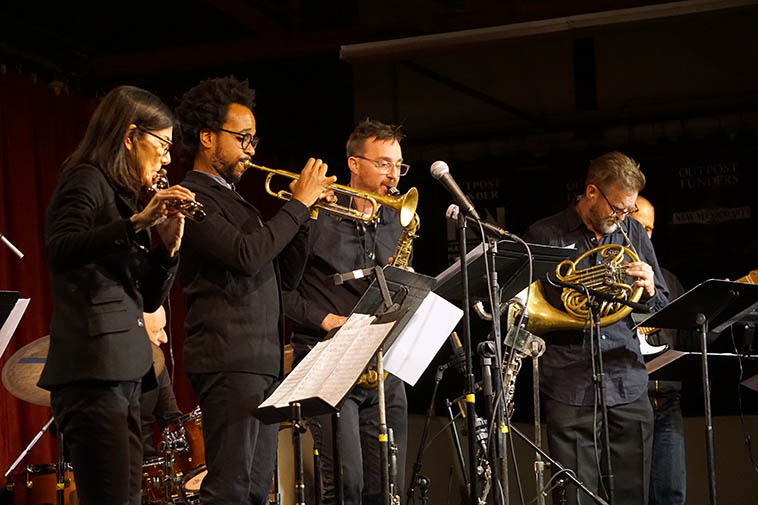 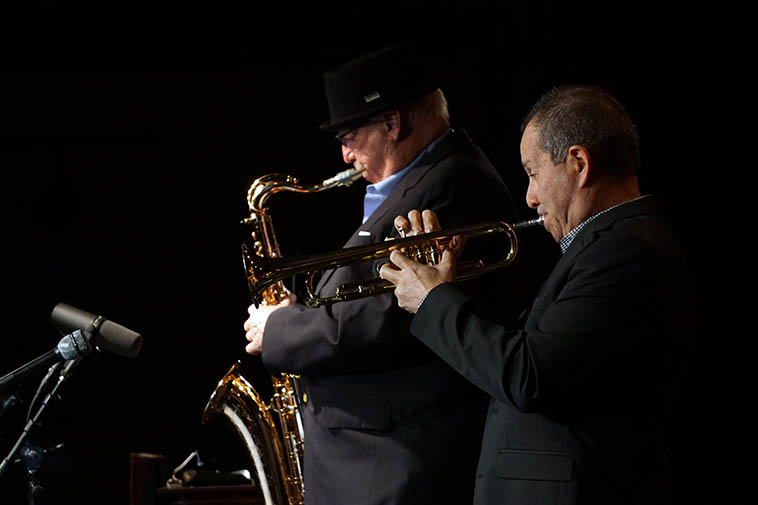 This Douglas-fir spreading jazz pine cones all over the place —- That’s Doug Lawrence and his Sextet at Outpost Performance Space November 5 —- the smokety smokin’ ensemble this night: Paul Gonzales (trpt), Terry Burns (bass), Doug (tenor), David Flores (new in town on drums), Ricky Carrido (conguero), Steve Figueroa (piano & B3) —— That hat you see me in on trail that has the peace symbol over the visor, Doug gave me many moons ago, Hey DOUG, I need another! this one has been on 200 hikes over the Pandemic Lockdown and is showing a little personality 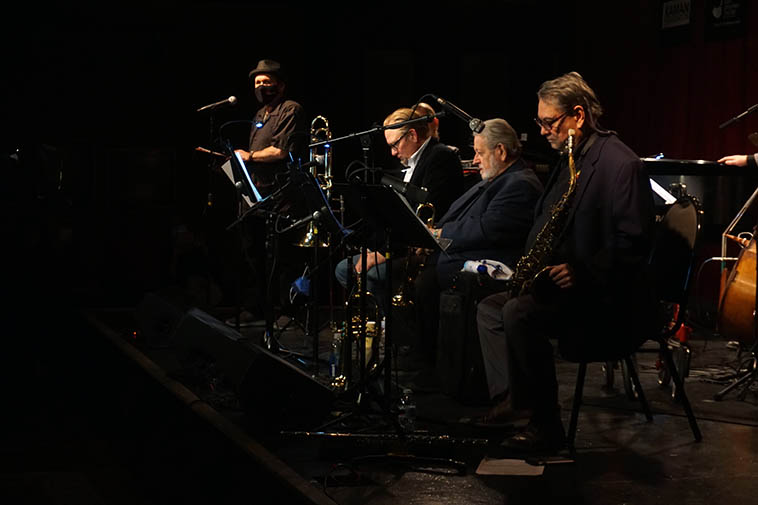 It can be spooky to think how
Alone we are out here
Floating in space
Tenuously
Provisionally
Gravitationally
Precariously
Blue is our wavelength
and all the forms of water
Deep under us a molten core
that boils over now & again
Circled by a deserted moon
Meteors, comets, asteroids
We hold up our babies and tree branches
to the giant hydrogen fiery cauldron
Too bright and hot to look at 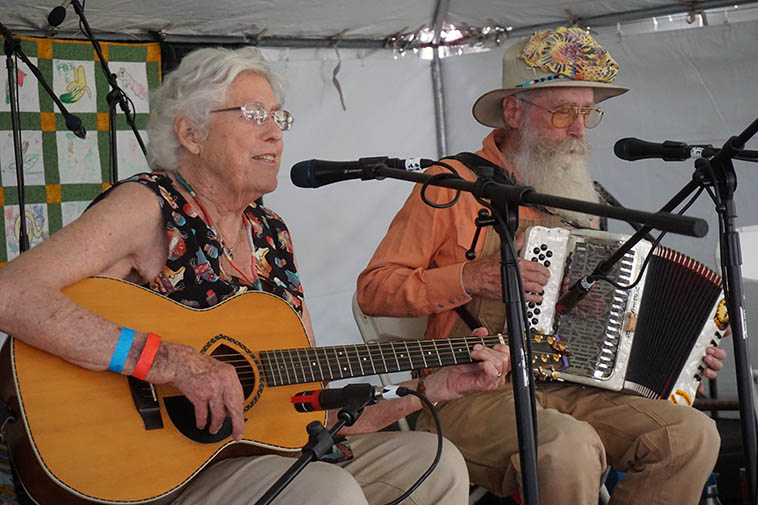