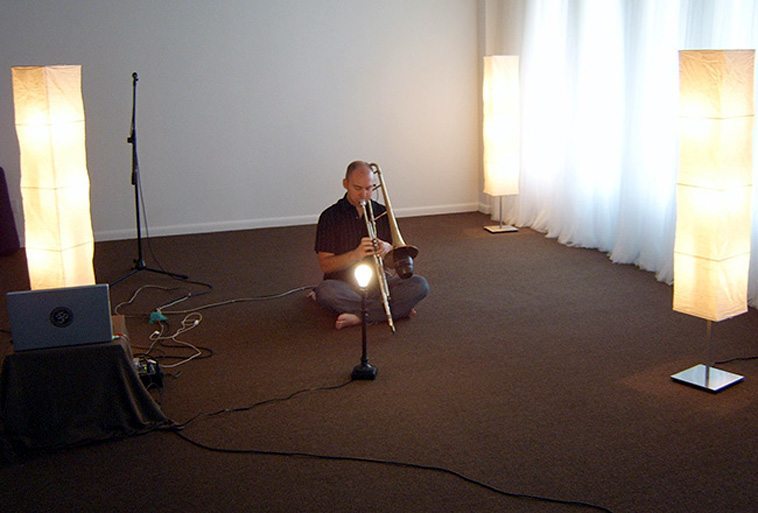 1. What was your first trombone experience?

My first trombone experience was in seventh grade when my middle school jazz band teacher suggested I try playing my parts on slide trombone instead of the baritone horn which I had been playing for two years at that time. I’m thankful that he did this because I don’t believe I would have had many of the opportunities I have had if I had continued with baritone horn. Even so, It’s interesting to me that I ended up returning to a valved instrument many years later.

But that’s not nearly as interesting as a memory I have of my first discovery of the idea of musical creation. I was four or five years old at the time when I received a Fischer-Price tape recorder as a gift and included with the recorder was a cassette tape of a story that had sound effects of the things that were described in the story played in the background using household objects. I don’t remember anything about what the story actually was about but I do remember there being crinkling cellophane for fire and blowing on the microphone for wind in addition to other sounds that represented things in the story. Looking back, I find that some of the work I do with sounds is remarkably similar to this, although often in a more abstract way without a specific narrative, where I’m using field recordings of everyday sounds juxtaposed together in unusual combinations and electronically modified to create new relationships between them.

Looking back to my early memories, I also see that I’ve always been interested in figuring out how things work and that this is often what is often most fulfilling to me about creating music. In my childhood, I would spend hours building with construction sets such as Legos, Capsella, and Robotix as well as toys such as Domino Rally, racing cars, and a roller coaster building set called Spacewarp. I would also put these building materials together and attempt to put things together in new ways using materials that weren’t originally supposed to be put together. I feel that the music I create now is a continuation of this practice of attempting to build sound structures with materials that usually aren’t found together.

Wow, these are great questions! …however a bit overwhelming especially being on tour. I started this 2 days ago when you sent it but I didn’t have any time in between to send it. I’ll attempt to answer at least one of them each day so you’ll have something to go with.

Since I’m in the middle of my tour now, I’ll answer question 6.

6. How is the tour going? Has the music morphed into something else from performance to performance than what we have on the CD ?

The tour [January 2o11] has been many things ranging from inspiring to monotonous and above all, has presented a myriad of opportunities for creative problem solving. In other words, things haven’t always gone according to plan. I’m touring in the dead of winter, one of the worst times to be traveling in the northern United States but I’m doing it mostly because I’m in-between semesters of teaching. I knew I would probably encounter some nasty weather, however, what I didn’t expect was that I would hit an ice storm in the deep south on my way from Richmond to Atlanta. Heading there, I ended up stopped for hours behind a truck that had jackknifed in a ditch and blocked traffic on the interstate, derailing my schedule of playing at Railroad Earth. I ended up staying for three days there and rescheduling the show for the last night I was there.

Besides that big hindrance, most things have worked out smoothly. Most of my time is actually spent on mundane things such as anticipating when my GPS signal is going to go away and getting all of the directions to the next venue on screen so I can be prepared when it does, double-checking to make sure I didn’t leave something at the gig or my host’s home, and making sure I find a laundromat at the right time on a day when I don’t have too much driving.

As far as the music goes, after having played this piece 10 times now in the last two weeks, it has stayed remarkably similar to the Zerx recording. It doesn’t seem to really want to morph into anything dramatically different and is comfortable staying more or less the way I recorded it. However, it has developed in very fulfilling and subtle ways though, one of which is that having the horn on my face every day in this way has made my endurance and technique much better. Even more exciting is that I feel more comfortable stretching each part out in more relaxed development, partly as a result of an inspiring conversation I had with Mar Sarich at Lemp Neighborhood Arts in St. Louis about reductionist compositional ideas.

Having these conversations with musicians around the country and lots of time in the car to think, what is beginning to reveal itself to me is a new piece in a different direction from Modifications of the Mind. Modifications is a piece based on discrete textural regions bordered by hard-edged transitions using only the sound of the trombone processed in real-time. In this next work, I’m interested in developing ways to transition more gradually and subtly, using only the sound of the trombone or pre-recorded sampled trombone for source materials in a way that sounds like a duet between myself and the computer rather than a solo.

2. Tell us about your teacher Bob Brookmeyer — what sort of things did he stress with you? What things were important to him that you should know?

Working with valve trombonist and composer Bob Brookmeyer was no less than a life-changing experience. I feel his influence in all of my creative work in a figurative internalized conversation about process. I remember my first composition lesson with him where he led me towards a more critical awareness of the things that shape a musical composition when he asked me what kinds of questions I was asking myself of the material I was working on. I had never thought of composition in those terms. The main compositional tool I took from him was a constant striving to make all elements fit together regardless of what the actual material is. He got me to thinking that the impact and flow of the piece as a whole is often more important than any isolated moments

In my trombone lessons with Bob sound and time were the most important things. He encouraged me to pay attention to the way I shaped notes making them “fat” as I worked laboriously from one single note to two notes to three and so on. He gave me an analogy that I sometimes use today with my own students of making the instrument sound like an iron fist in a velvet glove and constantly called me out on my time-feel.

3. Is it with Brookmeyer that you started with the valve trombone? You play all three trombones, slide, valve, and electronic — which one gives you the most trouble? ha ha ha . . .

I actually never worked with Bob on valve trombone; I was only playing slide trombone and composing at the time. I had also not gotten involved with electronics or much free improvisation either back then. A year after graduating from New England Conservatory I was working full-time as a music engraver (a fancy name for a music copyist) and over that summer I was able to save up the money to buy a valve trombone. I had always been curious about the instrument despite its low favorability among many slide trombonists and when I got it I immediately felt a connection.

Since taking on the valve trombone, I never seem to want to use slide trombone in my own projects. It works much better in standard musical situations such as big bands, salsa bands, orchestras, trombone ensembles, and even in many avant garde situations such as Mark Weaver’s UFO Ensemble because it projects better, has a clearer tone and is easier to play in-tune, but for my own projects, it feels totally wrong. I like the tone colors, extended techniques and inflections I can get on the valve trombone, the distinct articulation of the valves, and ironically, the way the valve trombone can slide in-between notes with half valves in a more colorful and ambiguous way than the slide trombone. 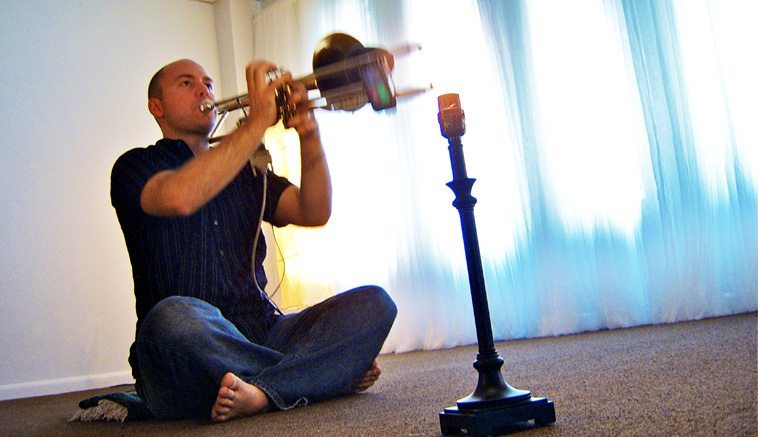 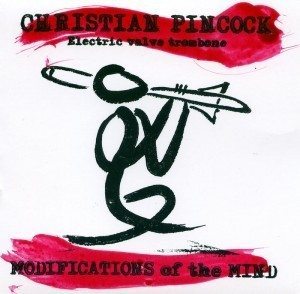 MODIFICATION of the MIND

Modifications of the Mind incorporates improvisation into a fixed compositional structure. The 6 parts (after the post—produced intro) are performed in real—time based on loosely organized instructions and durations. It is performed on electric valve trombone, a valve trombone outfitted with buttons and sensors to provide control over a computer program, developed witha MAX/MSP which alters the trombone’s sound in unique and surprising ways.

Modifications of the Mind represents the Yoga Ashtanga outlined by the ancient sage Patanjali. These practices from the Yoga Sutras have become the basis for many branches, of modern Yogic philosophy and can be seen as a guidebook for living a peaceful and contented life.

At the beginning of the Yoga Sutras, Patanjali tells us that our minds are busy with Chitta Vritti (mental modifications or disturbances) and that by doing these Yogic practices, one can restrain the disturbances and experience peacefulness.

The Niyamas are 5 practices for elevating ones presence in the world. These include Saucha (purity), Santosha (contentment), Tapas (austerity), Svadhyaya (personal inquiry), and Ishvara Pranidhana (surrender to the unknown.)

Asana is the practice of holding posture to focus the mind so the practicioner can distinguish between permanent and impermanent.

Pranayama is the practice of controling breath and energy for the purpose of integrating body and mind.

Pratyahara is the practice of differentiating between the senses and their causes quieting the reactive tendancy of the mind.