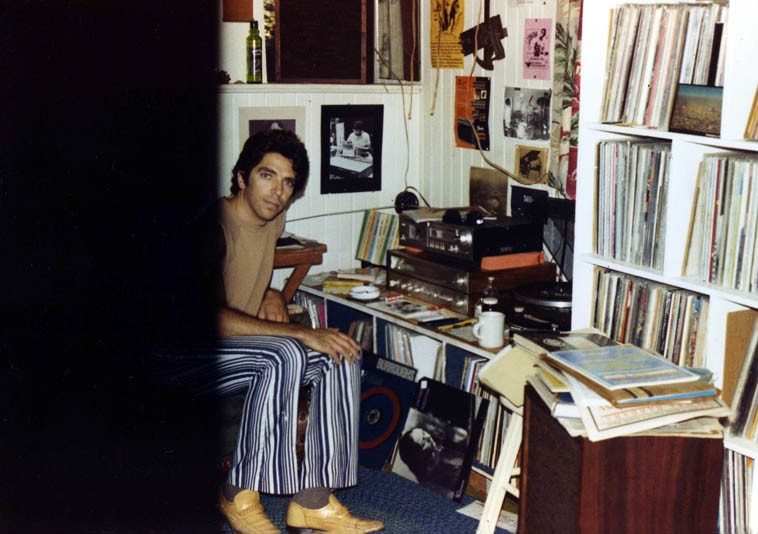 Here I am in my old house in the alley in Upland California, age 27 — August 1981 — Note my photo of Malachi Favors on wall behind AND on the floor Connie Crothers first album PERCEPTION which was in constant rotation those days —– I had only known Connie’s name in association with Lennie Tristano but as wyrd weaves its ways into your life, one day I’m in a supermarket and there’s a box up by the cash register that has only about 50 various albums all for 99 cents —- Now, let me explain: Record albums are not sold in supermarkets in Southern California (except during the Tijuana Brass craze of the early 60s and you’d find those in supermarkets) mostly supermarkets are for food (or as food industry observer Michael Pollan says: Never venture into the aisles, that’s where the horror begins, where all the processed “foods” are, just stick to the edges of supermarkets where the vegetable department is, and the meat, and the dairy) ———- SO, I’m standing in line and there’s these albums, and here’s this Connie Crothers, and it’s a reputable label –Inner City– and what’s it doing here? It must have been an insurance recoup from a truck accident? and so I bought one, took it home: a Saturday near Noon, put it on the stereo and it blew my mind, completely unexpected actually (I was somewhat jaded those years after the onslaught of music I’d been tearing through — I was, as Bob Dylan calls it: a musical expeditionary, still am) —- and this trio of Connie’s was like someone crawled inside my head and played music the way I always wanted to hear it — I was Los Angeles correspondent to CODA and the next annual Writers Choice I listed it in my ten favorite records of 1982 —- Wyrd is Anglo-Saxon/Northern European concept of Fate —- little did I know at the time how much the music of Connie Crothers would intertwine with my future. (we’ll be at The Stone on August 23, 2o14)

Air, sound, starlight
all flow through us
zing right through our molecules
we are vibrations ourselves
music shakes down into our bones
birds in trees sing to us all
……the songs that are coming through them
I go to record stores and buy round black flat spheres of energy vibrations
so shonan nango ngliacto monnan sended
tree bird sky

That’s all a radio show is: treebirdsky energy & spinning spheres 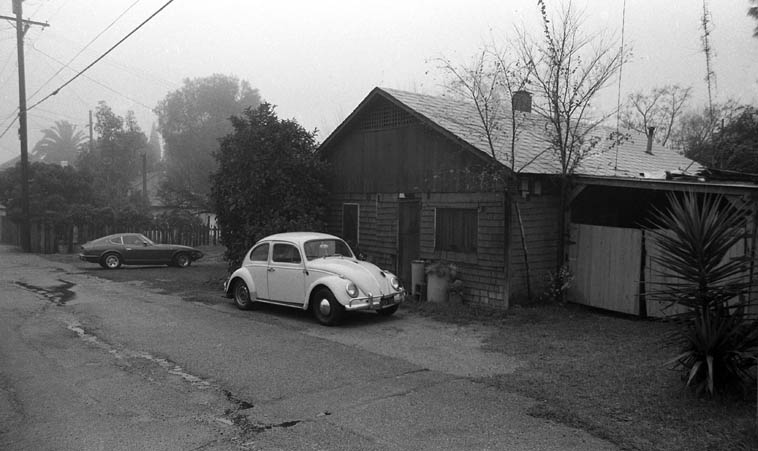 I lived in this alley house 1972-1985 — this photo by me circa 1981 on a foggy day, Southern California gets those dense pea soup fog coverings —- Frank Zappa has an extended work “Little House I Used to Live In” and it always reminds me of my little house at 400 1/2 Laurel Avenue, Upland, about 40 miles east of downtown Los Angeles 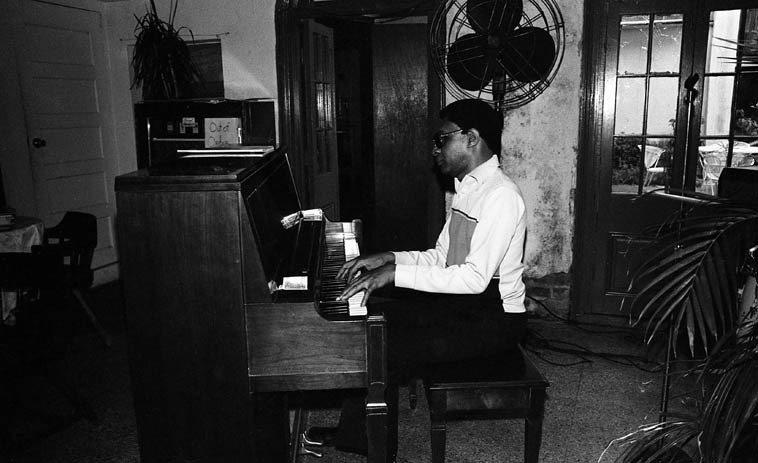 It was just me & James Booker & the fan & that Out of Order Cigarette machine & a few inattentive tourists, one afternoon in the French Quarter — July 9, 1982 — Crescent City Cafe, 601 Chartres Street — I remember James Booker finished directly at 5 o’clock stood straight up and walked right out the door, didn’t even grab the green in his tip jar — a ghost, he disappeared. 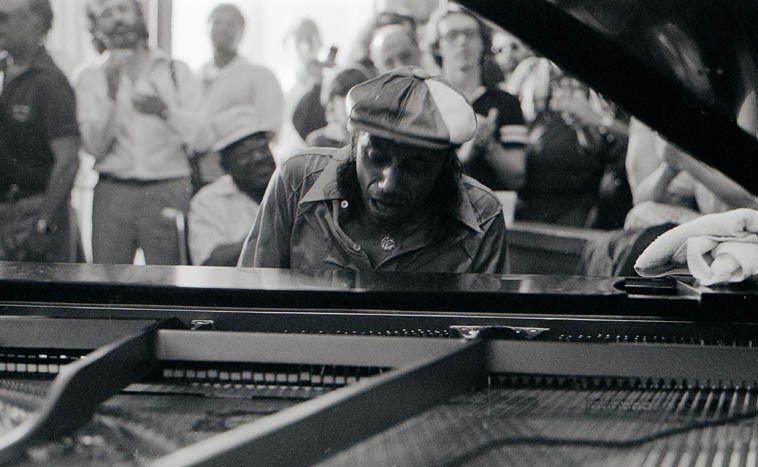 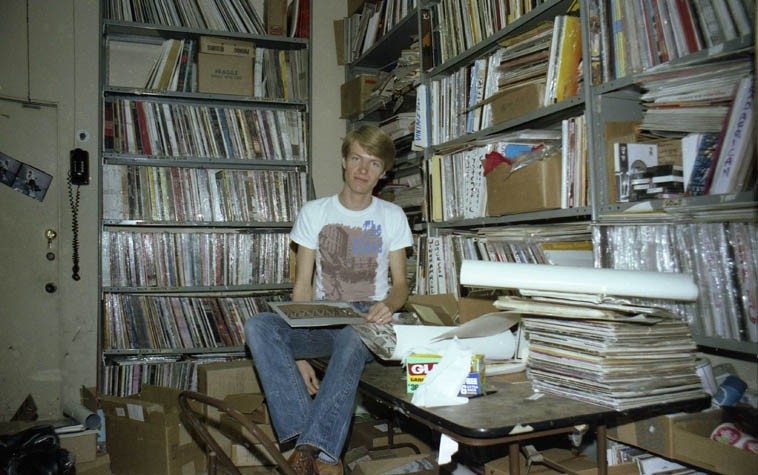 Nels Cline at Rhino Records, Los Angeles — June 1983 —- His day job before he got famous! —- Photo by Mark Weber —- We caught him with Wilco on Austin City Limits the other night on TV and I mentioned to Nels how his gold top Les Paul sliced right through that Nick Lowe guest spot, and Nels said: “That’s not my Les Paul — it was Duane Allman’s!! The one from the first two Allman Bros records/Derek & The Dominos! My friend from the Allman Brothers Museum in Macon brought it for me — I had played it a couple times before, incredible . . .” [email 6july14] 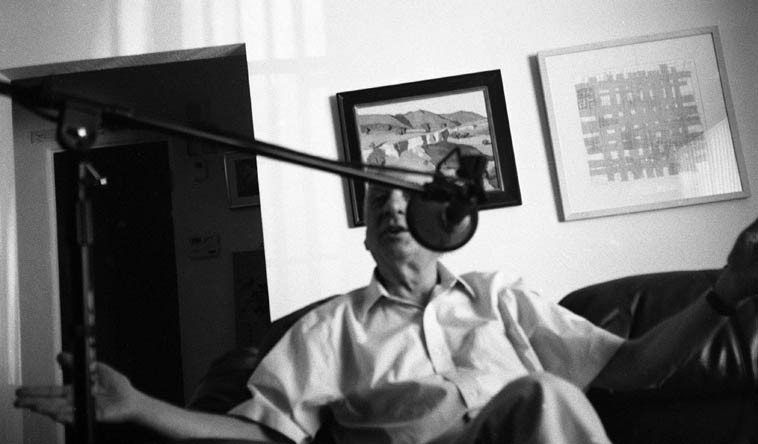 I have “better” photos of Dick Hyman but I just like his body language in this one, sitting on our couch here at Studio 725 while I interview him — September 20, 2o10 Albuquerque —- one of the masters of jazz we talked for 3 or 4 hours! I still have to edit the recordings down for radio play someday! —– on today’s radio show I’ll probably spin Dick’s rendition of Jelly Roll Morton’s “The Crave” which flew up in memory only last Saturday night at the Outpost in the hands of the New Orleans professor Tom McDermott —- Dick’s version is with his New York Jazz Repertory Company w/Joe Wilder, Kenny Davern, Dick Hyman, Vic Dickenson, Milt Hinton, and Ali Ryerson’s father Art Ryerson on guitar! a 15-piece orchestra —- Kenny told me that the band uniform had NYJRC as a sewn insignia above the pocket and he joked that they all said it stood for: New York Jewish Rowing Squad (don’t quote me on the “Squad” it was something like that) 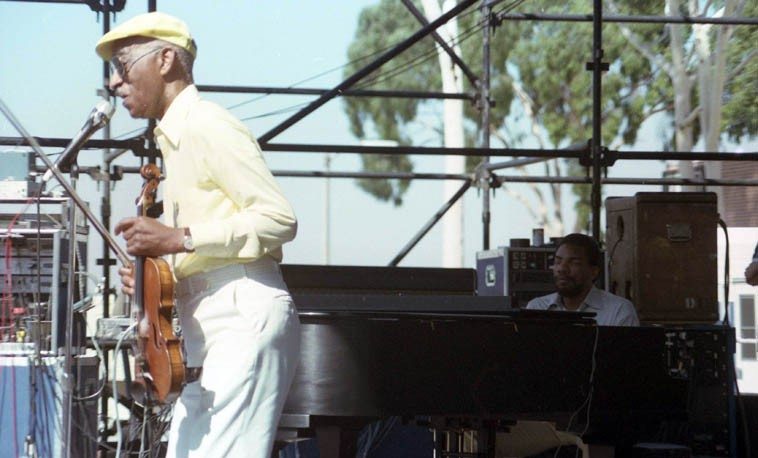