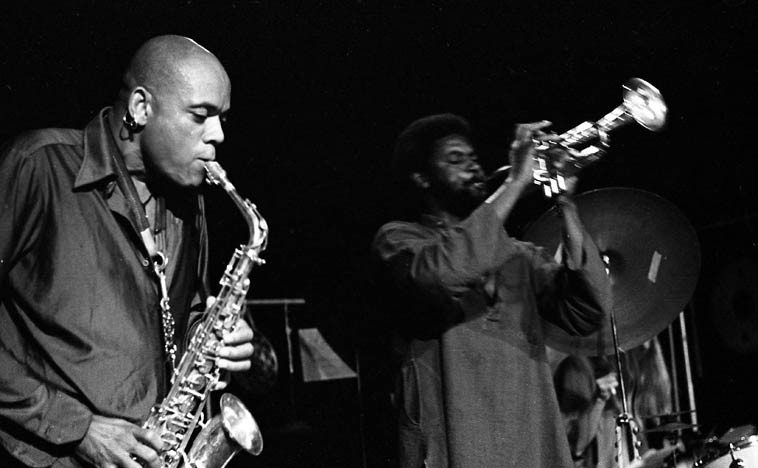 How could there be anything but the hard blues for us in this fallen world, this vale of tears? Julius Hemphill Trio — September 11, 1977 in Los Angeles — Alex Cline, drums; Baikida EJ Carroll, trumpet —- photo by Mark Weber ——– When the Lp COON BID’NESS (Arista, 1975) hit the streets it knocked us for a loop, it was Hemphill’s first album, and contains one entire side of “The Hard Blues,” a giant snarling, whiplash of a blues driving along in an old pickup truck with one flat tire, jolting, spitting, wailing, a blues of disaffection and pity, pitiful, pitiless, a stomping pastiche of roadhouse dishonor, the southwest blues down to the core, nasty, salty, unredeemed. Our beloved blues, it fit the times, maybe still does, the dignity of the blues, honest and forthwith, we’ll be giving it a spin, the same Lp I’ve had since 1975, however many years that is? It’s one of those records I can hear in my head, having listen’d to it so much back then, like a west Texas sirocco, it’s always in your ear.

Interesting notion my yoga teacher
put out there this morning: That the
universe expands and contracts and
like a bellows is breathes you 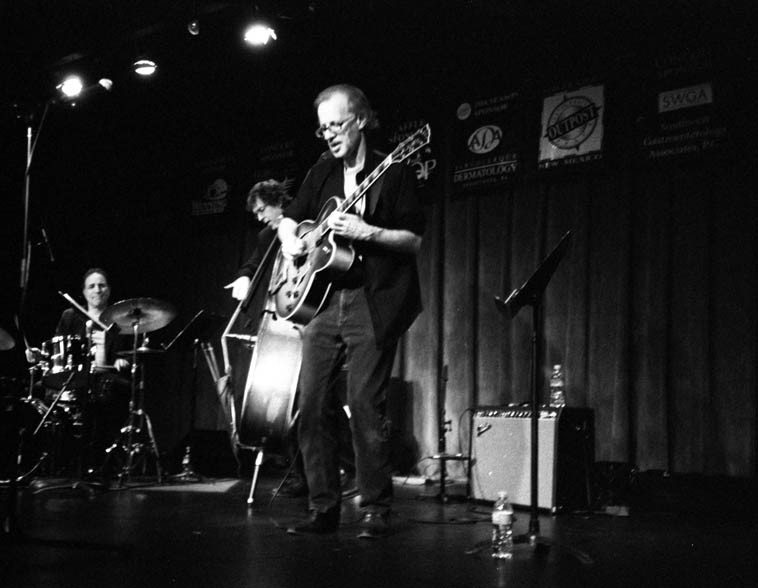 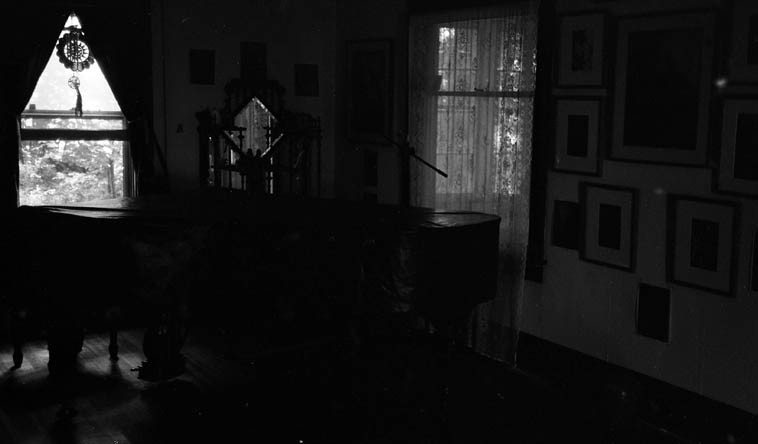 Kazzrie Jaxen’s piano — early morning August 8, 2o11 —- her home up on a hillside in a forest with a river nearby — Callicoon, New York — photo by Mark Weber 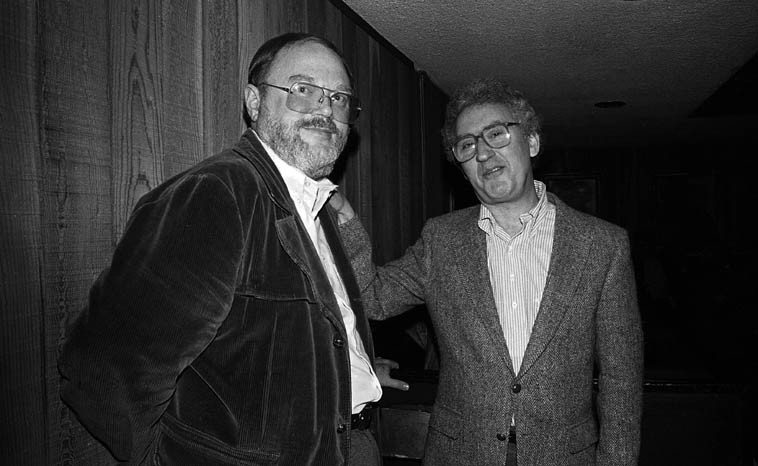 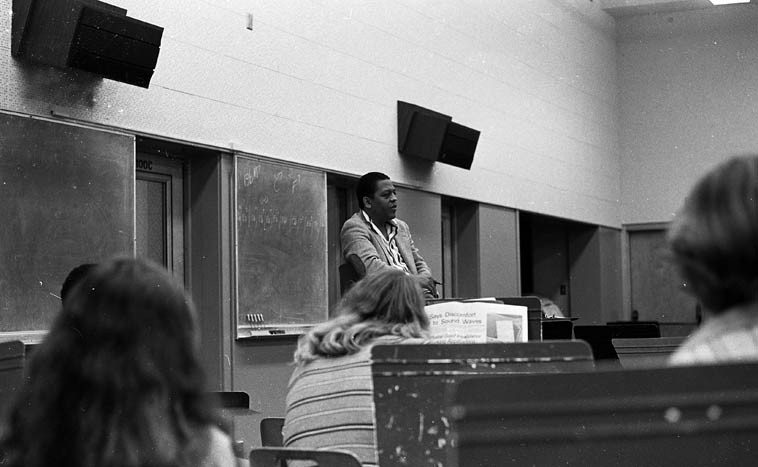 Bobby Bradford with class at Pasadena City College — September 17, 1976 —- the thing with Bradford is that when he’s dealing with a classroom or with an individual he always looks for common ground so that he understands where to start teaching you, he’s walked me through so many concepts over the years and he’s always used this technique —- photo by Mark Weber 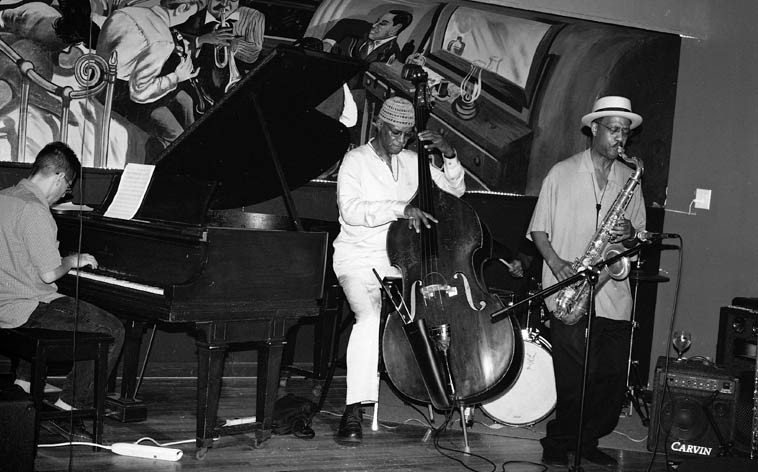 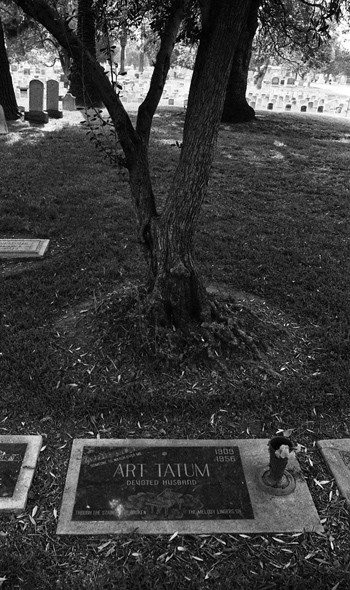 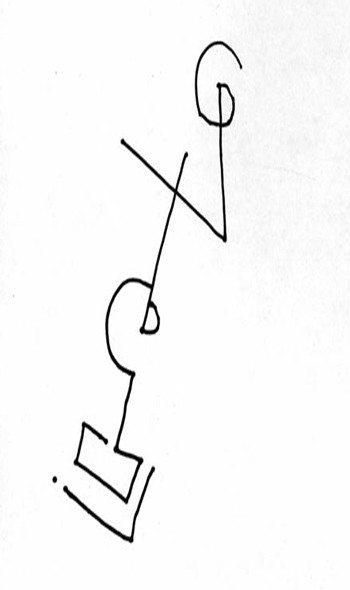 I don’t remember which Kerouac book it was where he says the “Negro is the essential American” (maybe it was his poem “October in the Railroad Earth”?) — I was a teenager growing up in mostly white suburbs of Los Angeles and that statement was hard to grasp at first, it really made me think, and it took a few years to realize what he meant and how true it is — Kerouac, as ever, right on the money —— America is an experiment in representative government, a social experiment, a melting pot of cultural influences is America, good or bad, a train-wreck sometimes, but the human spirit has found some elbow room here, and jazz in a lot of ways is the ultimate democracy ———- Art Tatum — Rosedale Cemetery, 1831 W. Washington Blvd, Los Angeles — April 26, 1981 — photo & line drawing by Mark Weber 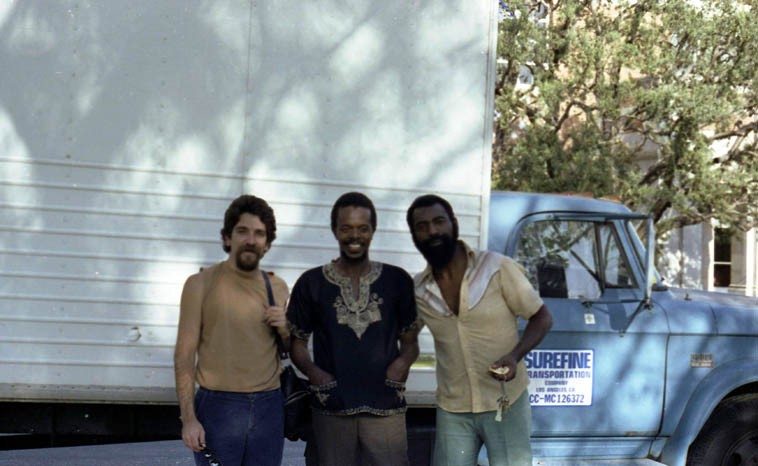 Mark Weber, Horace Tapscott, Henry Franklin — May 16, 1981, UCLA — I believe this was snapped by Linda Hill, she was always grabbing my camera and taking pictures (which I approved whole-heartedly) — Horace and the Pan Afrikan Peoples Arkestra was getting ready to play outdoors — Henry has a new release TWO VIEWS (SP Records) that we’ve been spinning and will spin again this day. 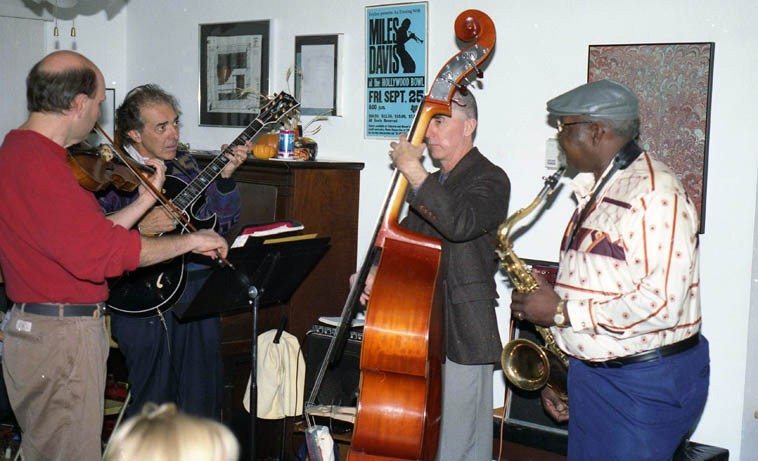 Housewarming Party at 725 —- October 27, 1996 Albuquerque — Janet & I still live here, and by the time of this party we’d been living there ten months, so it was kind of a belated party(?) — Jam session: Tim Zannes, violin; Michael Anthony, guitar; David Parlato, bass; and the late John Lewis Kilpatrick, tenor saxophone — photo by Mark Weber 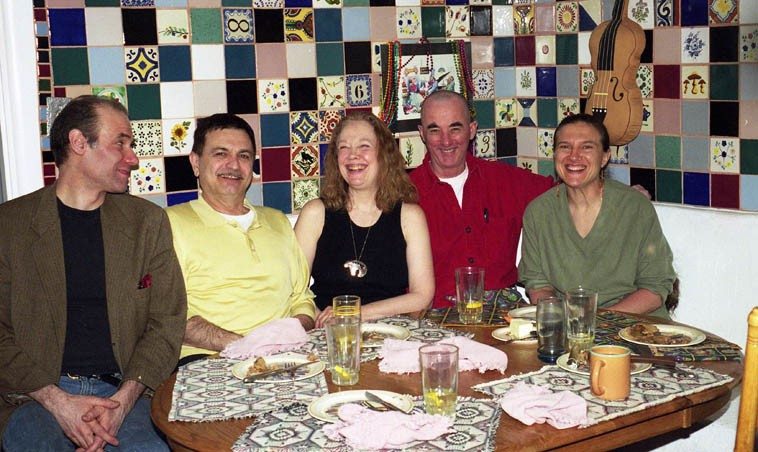 We called ourselves the Warne Marsh Appreciation Society that night —- the Connie Crothers Quartet was in town to play the Outpost —- this dinner the night before at 725 (Janet & my house) — March 25, 2001 Albuquerque —- Richard Tabnik, Roger Mancuso, Connie, David Parlato, Janet Simon, who cooked us something delicious —- photo by Mark Weber (how do you like my tile work?) 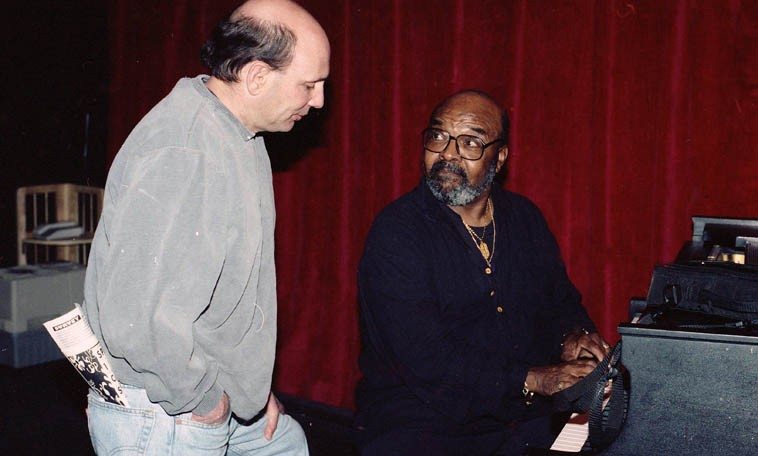 Two tenor saxophonists lean on a piano —- James Moody showing Tim Zannes the changes on the Outpost Steinway —- April 21, 1997 —- photo by Mark Weber (Zannes plays both violin and tenor saxophone and lives in Albuquerque and grew up in Cleveland, Ohio) 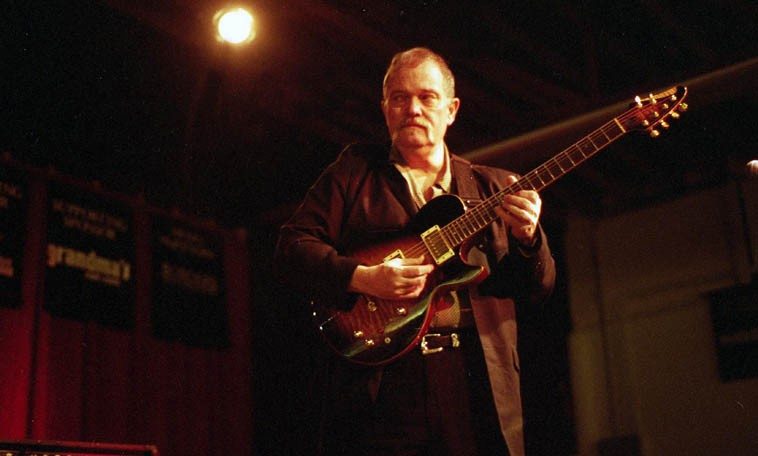 John Abercrombie —- February 26, 2oo1 —- it was during soundcheck that I realized that Abercrombie’s musicianship is on a whole other level of mastery —- I know I should have known that from his records, but sometimes, watching someone work, something else squeaks through and your understanding is magnified —- he was using a stereo set-up of amplifiers on this performance at the Outpost —- photo by Mark Weber 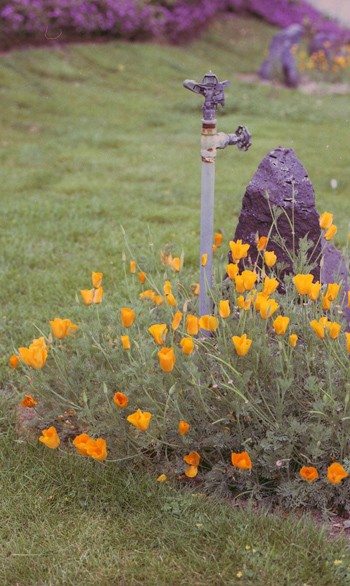 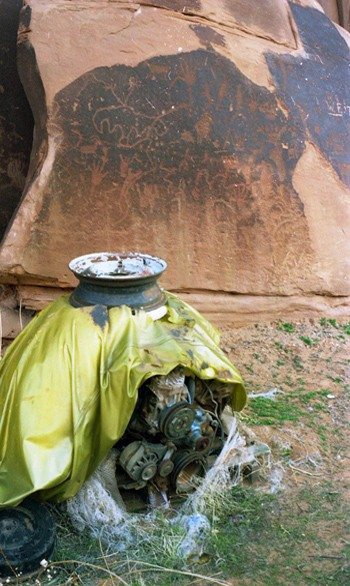 Has there ever been a time when irony did not exist? Way back in the prelapsarian greenwood, hazy mists of pure innocence? Think about it: Irony is a turn of mind, an artifact of mind turning its wheels, a remnant of the over-active opinionated “thinking” ——– You could call this pair of exposures: Juxtapositions — Anasazi petroglyphs & V8 engine, Moab, Utah, January 1, 1994 and Rainbird & California Poppies, May 1978, Upland, California —- photos by Mark Weber