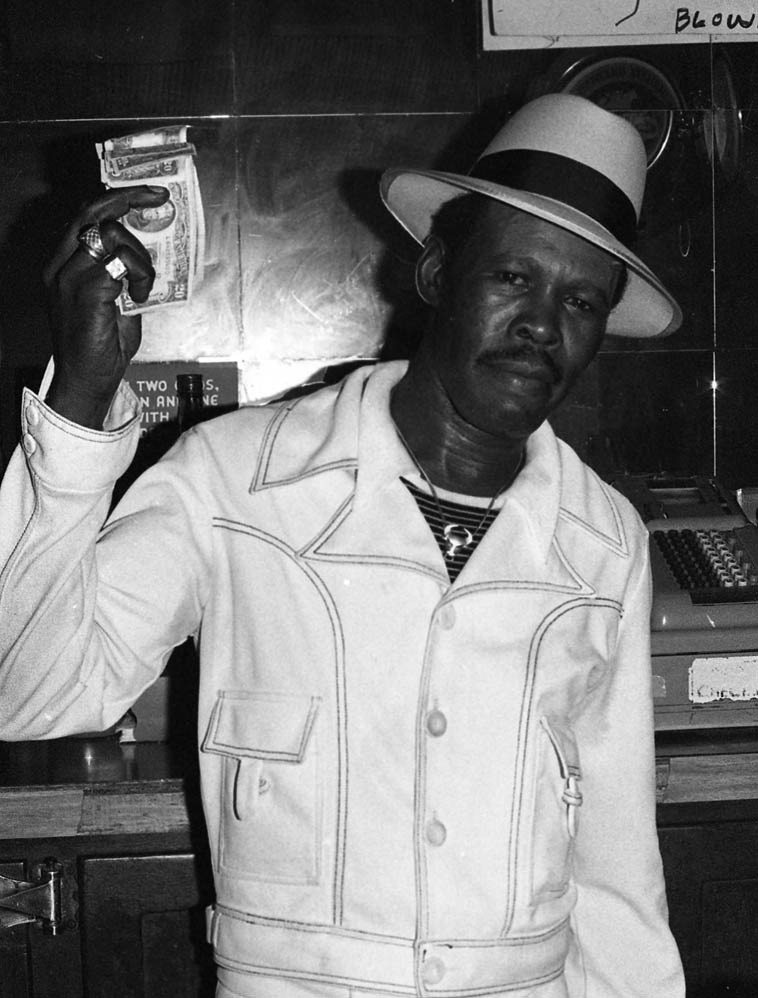 Smokey Wilson showing us the cabbage —- behind the bar at his Pioneer Club, one of my watering holes, 88th & Vermont, Watts, Los Angeles — 1978 photo by Mark Weber —- Smokey could really tear up a guitar, this was blues of the hard-bitten and gritty variety, a beer & wine establishment he kept a whisky bottle in his office so that during breaks (when he wasn’t on stage) we’d go back for a little nip —- When he came to Albuquerque on tour in 1995 playing at El Madrid I hadn’t seen Smoke in many years and when I walked up he shouted “Johnny Walker Red! Where you been?”

Fundraising is a fact of life in public radio — over 50% of our funding comes from listeners. I asked general manager Richard Towne for some figures. KUNM’s “audited expenses for FY14 came to $2.4 million. Divide this by 365 days, and divide again by 24 hours, and you get $275 an hour. It’s actually $274 but rounding a dollar will make it more comprehensible.” Round up, round down, I know next near to zip about business, hither & yon, so it’s a good thing that I subscribe to the business model: Division of responsibilities. My job is to provide jazz content on Thursday afternoons and then go home and have a sandwich.

Consider that KUNM has 102 active volunteers and 19 paid staff and you’re lookin’ at a lot of infrastructure. I’m a volunteer, it is my pleasure (I don’t think they pay people to have this much fun) — KUNM is a beehive of activity. It’s a big operation, we blanket half the state of New Mexico’s population with our signal, serving 100,000 listeners each week. Add to that the untold wave of listeners via our webstream.

In the age of digital technology we now differentiate old-school radio signals as: Terrestrial radio.

Another very cool thing about KUNM is that as much as we use local programming as much as possible with living breathing on-air in-the-moment hosts and disk jockeys as well our own news team, we still need to fill some gaps with outside productions, but Richard is careful to procure this programming from a variety of sources rather than just one entity. We use Pacifica, NPR, PRI (Public Radio International), FAIR (Fairness & Accuracy in Reporting), Paul Ingles Good Radio Shows, and so forth.

Jazz has never been a popular art form (except for a few weeks back in 1935) and it is probably better for it. Myself, I’m not all that good at asking for money, but that’s not a cop-out, I’ve just had to figure out other ways around my limitations. That’s where Patti Littlefield comes in, ha ha ha. She’s my long-time substitute when I’m not around and she’s a lot of fun on air. We only stop our work twice a year, at 6 month intervals, to have pledge drives, so, think about it. 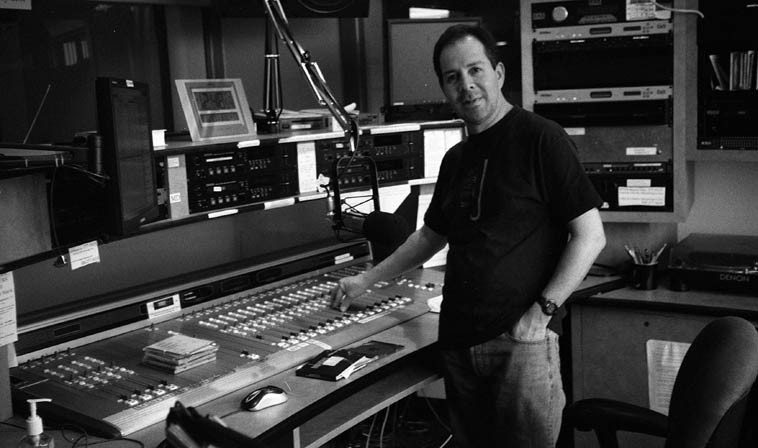 Paul Gonzales in the control room at KUNM — 12:48 (noon) March 15, 2o10 (every Monday) — photo by Mark Weber —- We’re going through a strange period of time when it’s hard to find prospective hosts who want to be jazz disk jockeys, you know? Good ones, like Paul who is also an A-List trumpeter & a virtuoso on the cuica —- Paul has been spinning disks and doing interviews at KUNM something like 15 years and I catch his show almost always, because I always learn something, besides of course having a great musical experience, which is why we listen in the first place, right? 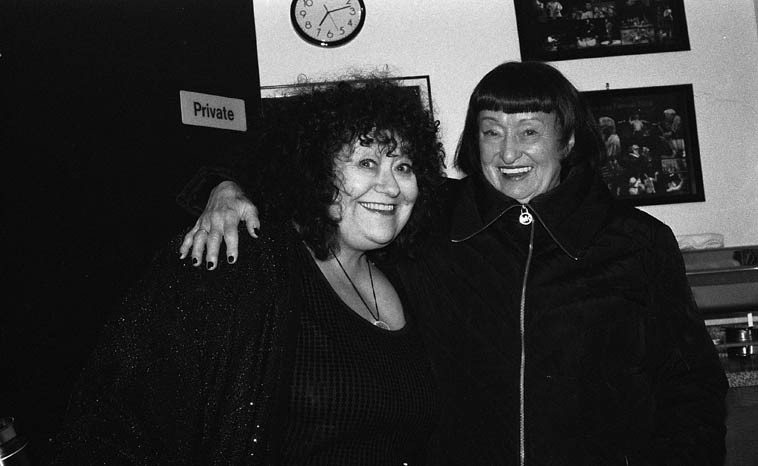 Patti Littlefield & Sheila Jordan backstage at The Outpost Performance Space — they shared the bill that night, both of them with duets —- (Sheila’s way with song has always been the model for Patti) and Patti is my co-host this day as we remind the listeners about how non-commercial public radio works — photo by Mark Weber — March 5, 2o15 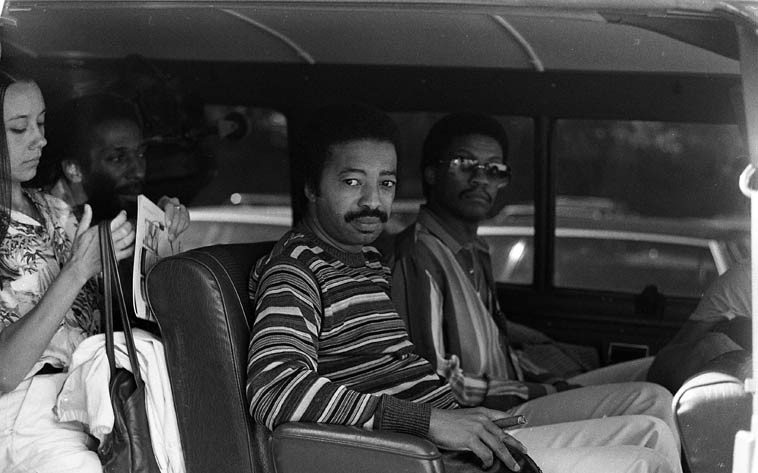 Ron Carter, Tony Williams, Herbie Hancock — June 20, 1981 — photo by Mark Weber —- the music that these guys made with Miles is for the ages 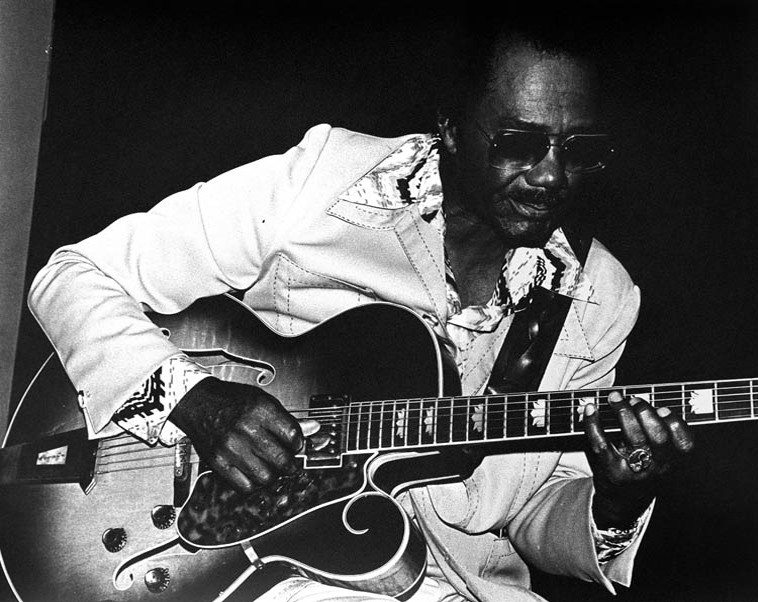 H. Ray Crawford — 1980, Pomona, California —- I saw Ray play so many times at this restaurant right off the San Bernardino Freeway (on Red Hill Blvd) that I don’t exactly know when in 1980 I snapped it, this one was used for one of his CD covers —- One gets tired of hearing about under-appreciated artists but Ray was seriously under-recorded, he had a lot of music inside him —- One afternoon after a band rehearsal he made me sit down and listen to Respighi’s symphonic poem “The Pines of Rome,” he was living with the family of his drummer Dumas at that time, he was doing a lot of relocating those years — he had an acoustic guitar (a Banaby) and was noodling along with the symphony — (Ray is the guitarist on Gil Evans OUT OF THE COOL) — photo by Mark Weber 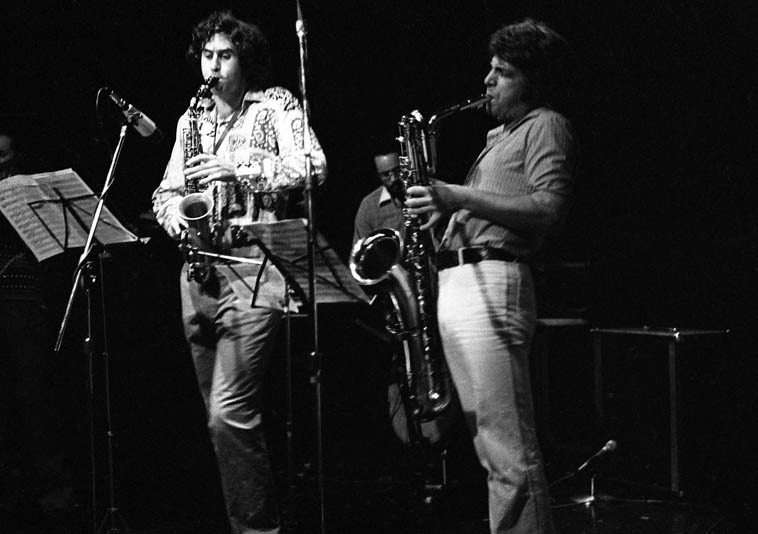 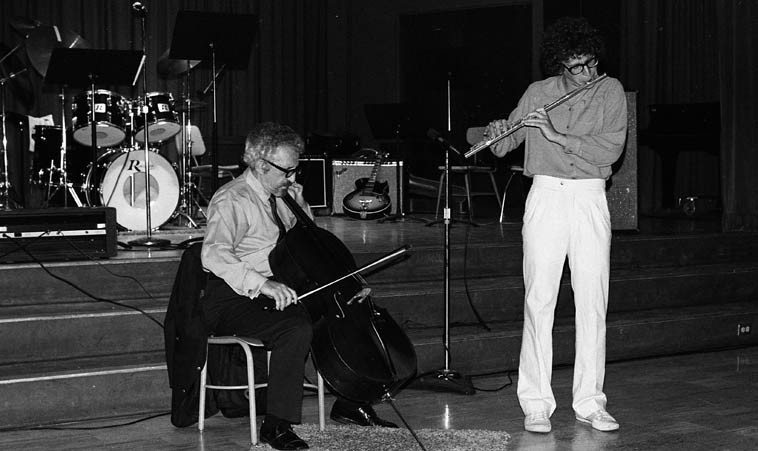 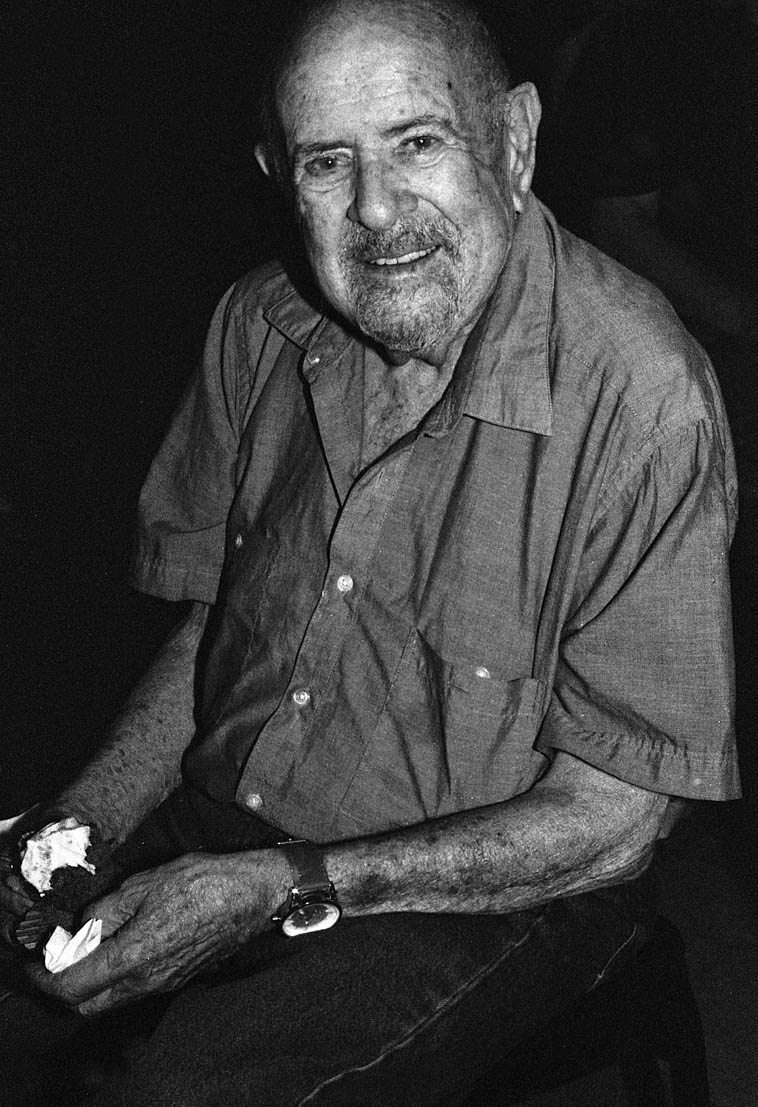 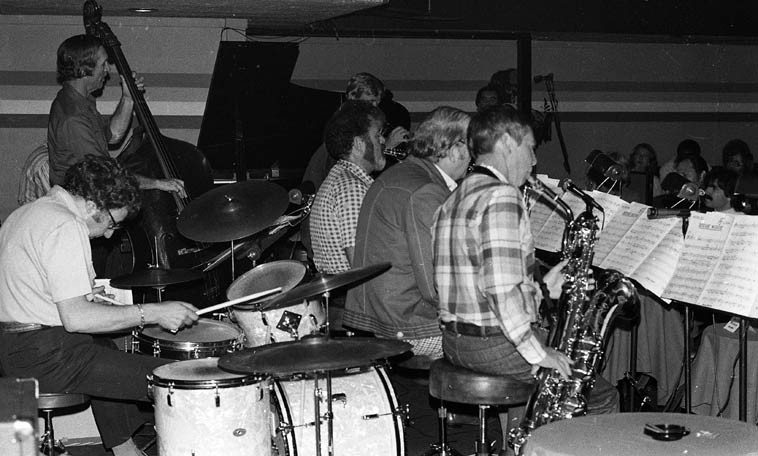 Prez Conference at Donte’s: Lester Young was the most, jazz for mostly, we’re still following his vapor trail —- It was Dave Pell’s idea in the immediate wake of Supersax to create a body of work for a saxophone ensemble on the flowing lines of Lester Young and he called this group Prez Conference —- (Supersax was dedicated to Bird) —- And also around this time Tony Rizzi formed his guitar ensemble dedicated to Charlie Christian’s lines —- These three bands were in Los Angeles in the 1970s — photo by Mark Weber — May 27, 1979 — Frankie Capp, drums; Monty Budwig, bass; Nat Pierce, piano; Bill Berry, cornet; Bob Hardaway, Dave Pell, Bob Cooper, tenor saxes; Bob Efford, baritone sax; charts by Bill Holman — Note the fellow standing against the far wall with beard, that’s Cary Leverette, the proprietor of Donte’s 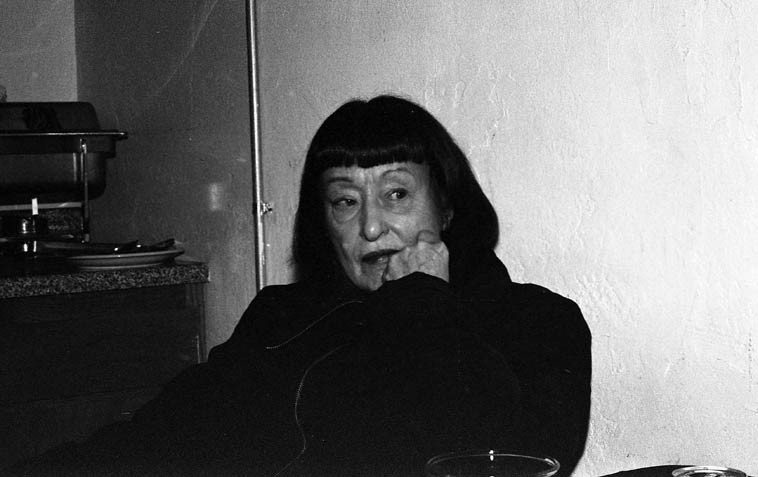 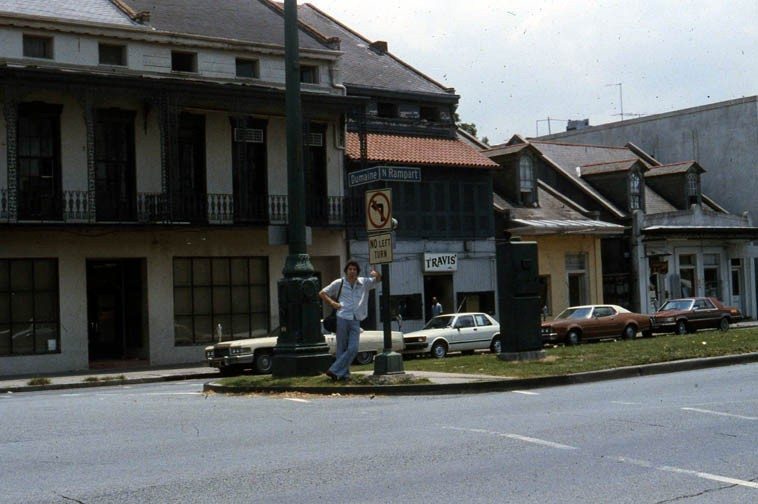 A lot of stuff always happening at Rampart & Dumaine —- my elbow is pointing at the building where Cosimo Matassa’s J&M Recording Studio was located from 1945 to the early 60s and where thousands of great records emanated, Professor Longhair sang about it: Dave Bartholomew, Ray Charles, Earl Palmer, Irma Thomas, Clarence Frogman Henry, James Booker, Big Joe Turner, Allen Toussaint, Roy Brown, Ernie K-Doe, Huey Piano Smith, Jerry Lee Lewis, Snooks Eaglin, Fats Domino, Dr John, Little Richard, Smiley Lewis, Harold Battiste & AFO, Ellis Marsalis, Ed Blackwell, Red Tyler . . . . you get the idea, they were all in there —- Directly behind where my brother Brian was taking this shot with my camera is now Louis Armstrong Park, but for many years back to the 1800s was Congo Square, who’s ghosts must have helped Cosimo at the controls — French Quarter, New Orleans — July 1982 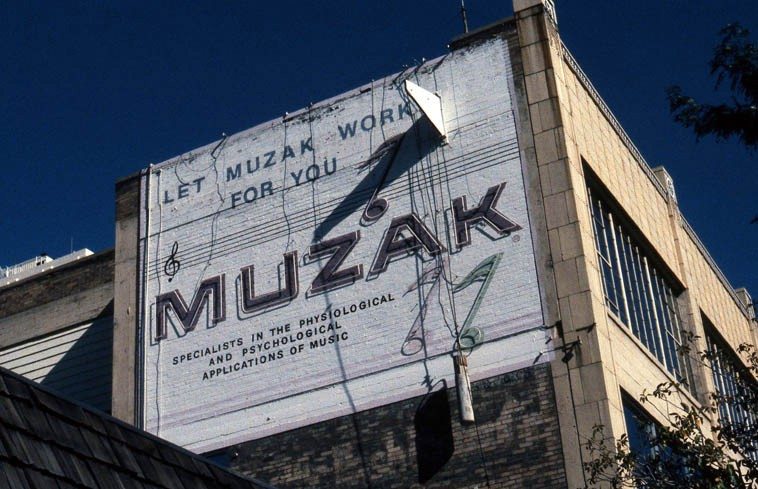 To those of us who love music, a concept like Muzak is beyond our comprehension —- photo by Mark Weber — August 1989 — Salt Lake City 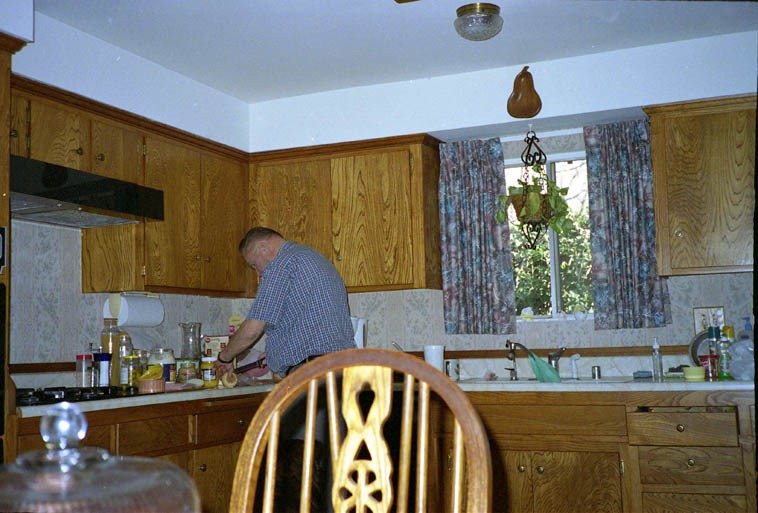 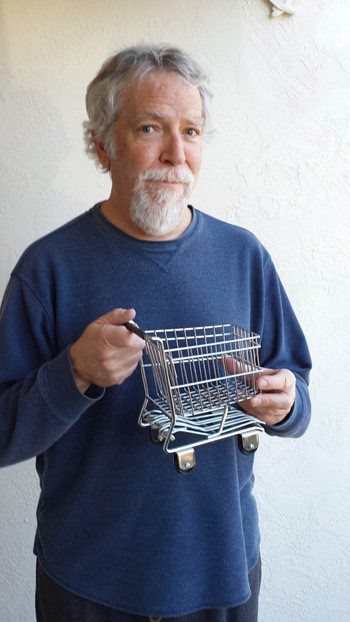 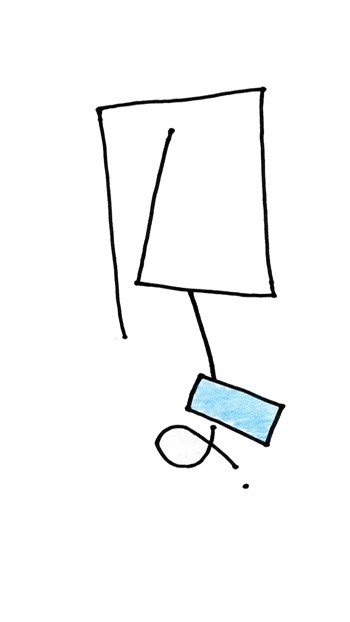 I couldn’t think of a snappy witty caption for this shot by Cal, but seems easy enough to see that honest-to-god jazz radio needs your support for continued jazz programming, hence: The shopping cart of public radio destiny is filled by listeners who are paying attention — MW — February 6, 2o15 — cell phone photo by Cal Haines