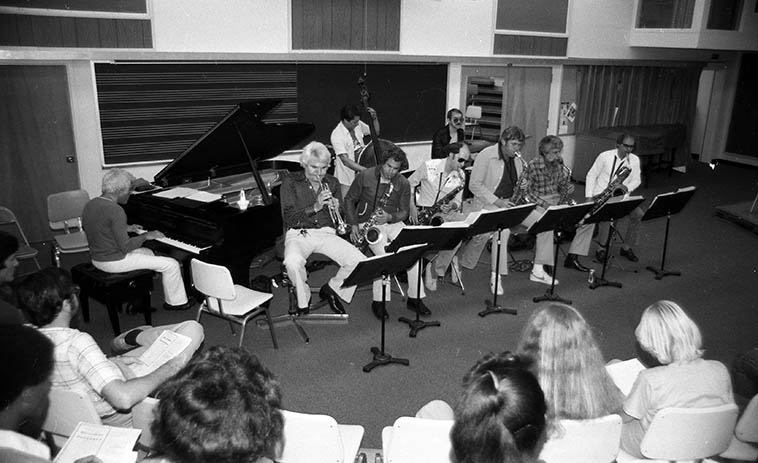 Supersax, the band that played Bird: Lou Levy, piano; Frank DeLaRosa, bass; John Dentz, drums; Conte Candoli, trumpet; Jay Migliori, Ray Reed, Med Flory, Lanny Morgan, Jack Nimitz, saxophones —- Clinic at Cal Poly, Pomona, California — June 6, 1980 — photo by Mark Weber —— These guys were uniquely suited to play Bird simply because he was their idol and they had grown up as youngsters absorbing Bird and were hardcore boppers —- also, they could read this involved material because they had all spent time in the big bands of Kenton, Woody Herman, Maynard Ferguson, et. el. —— By the time Med sat down in the early 70s to finally bring this idea to fruition and write some charts he had been in big bands 25 years ( ! ) SO, he KNEW what he wanted to hear —— I wrote one of my most extensive ethnographies on this band SUPERSAX back before we stared Jazz For Mostly, so you can find it at drummer Cal Haines’ website —- Supersax recorded eleven albums of pure majesty and utter virtuosic artistry

One thing about a having a weekly radio show is it forces you to reassess.

I formed a lot of my musical opinions, like most of us, in my late teens, in the Sixties when so much was going on —- From age 14-18 you discover so much —- I still remember among my friends discussing this hermit who makes his own instruments, named Harry Partch, we really built a mythology around Partch —- and then all those Nonesuch Explorer records (all praise to series director Teresa Sterne) at a cut-rate price we could hear everything from Chinese zither to Japanese shakuhachi to Balinese gamelan, African hunting songs, Tibetan Buddhist chanting, and one of my all-time favorite records Ram Narayam sarangi —-ALSO, Nonesuch put out both of Morton Subotnick’s SILVER APPLES OF THE MOON and THE WILD BULL, early electronic music (on the first Buchla synthesizer) which were elevated in my teenage head to mythological status, so that years later amazingly I actually had lunch with Morton Subotnick (7/26/97 my autographed LPs say)(Thanks again to Teresa Sterne, both albums commissioned by her for Nonesuch). So that my ears were really going for this stuff, all those great records on the Philips label by Iannis Xenakis, Stockhausen, George Crumb, Elliott Carter, Luciano Berio, and another of my all-time favorites Charles Wuorinen’s TIME’S ENCOMIUM ———————–AND the record that really wiped me out, I think after Silver Apples this was the second one I acquired of electronic music (I hitch-hiked to Wallich’s Music City, Covina —- too young to drive) and brought home Tom Dissevelt’s FANTASY IN ORBIT (1963) which still to this day gets to me ———–AH, well, pardon my trip down memory lane.

One thing led to another and I became a jazz head. Which was an interesting odyssey in itself. And continual investigation and pleasure and looking over old opinions and reassessing. 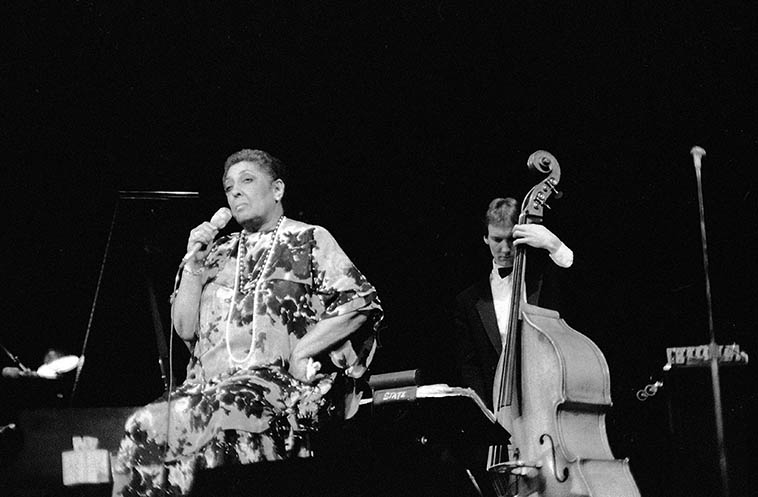 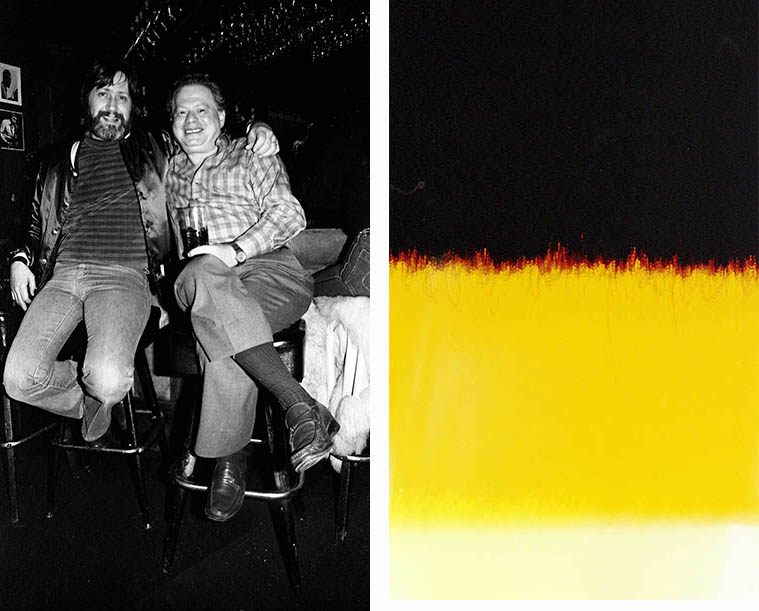 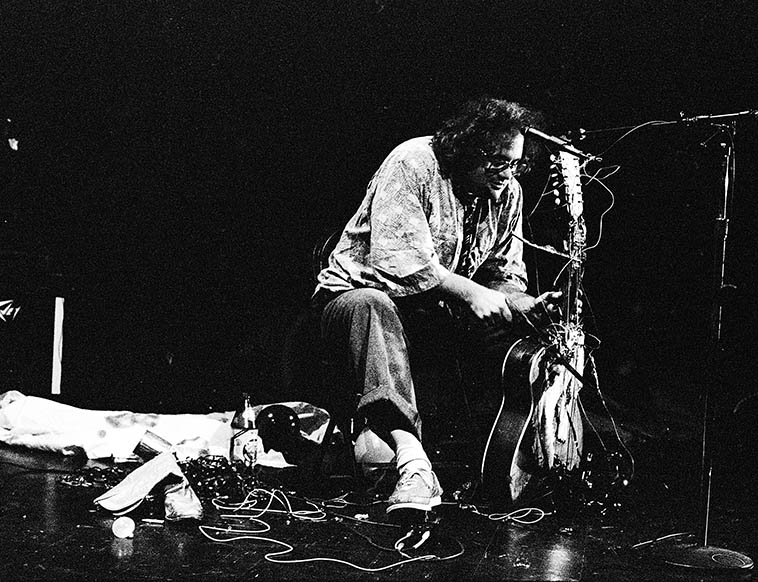 Eugene Chadbourne solo concert at P.S. 122, Manhattan —- December 2, 1988 —- I published a review on this great concert in CODA magazine —- Dr Chadbourne opened the concert by wiggling out from the wings on his belly and adjusting dials on his feedback amplifiers and played his famed electric rake and was generally on his game this night, so much so that I still all these years later marvel at the memory — photo by Mark Weber 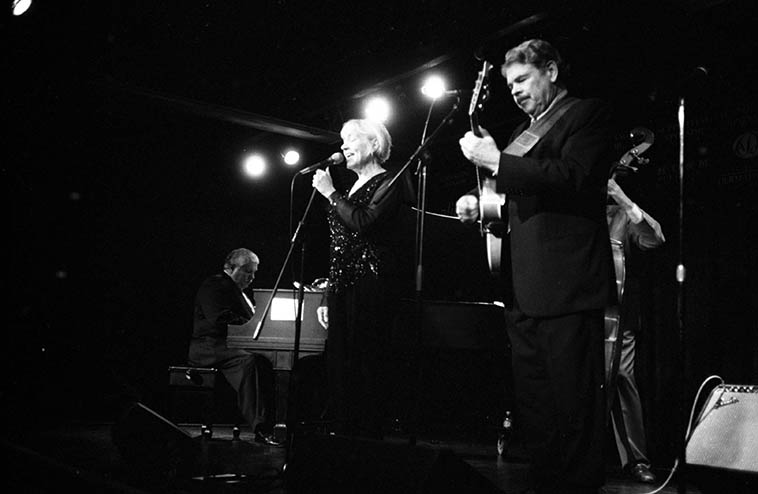 Rebecca Kilgore Quartet in Albuquerque — September 30, 2o10 —- Has it really been that long ago? This concert is still resonating inside my brain all these years later, what a great jazz singer —- That’s Dan Barrett set his trombone down and jumped on the piano; Eddie Erickson, guitar; Joe Forbes, bass — photo by Mark Weber at Outpost Performance Space 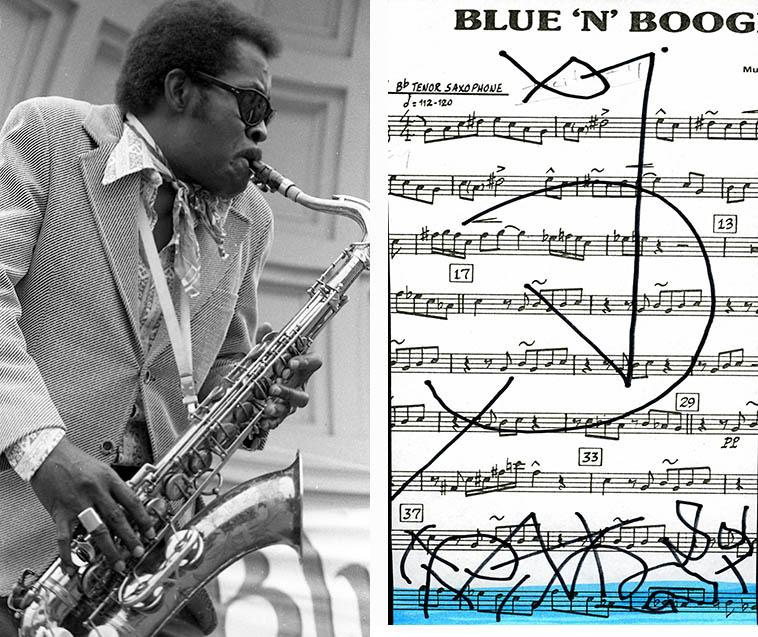 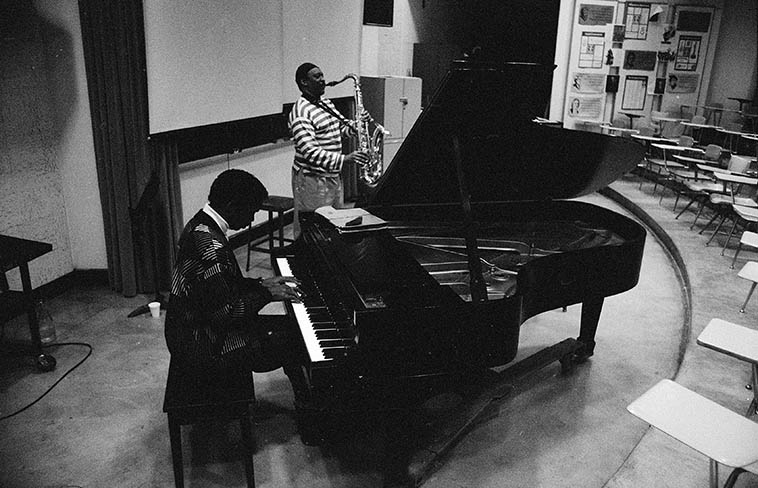 Don Pullen and George Adams afternoon music clinic at Tri-C Jazz Festival, Cleveland, Ohio — April 7, 1989 — photo by Mark Weber ———– When I asked them about all that bluster from Charles Mingus on stage, when Mingus would yell out directions like a madman: “B FLAT MOTHERFUCKERS!” they told me that Mingus was a pussycat and all that was for show ——- My hair always stood straight up and I was quaking in my boots 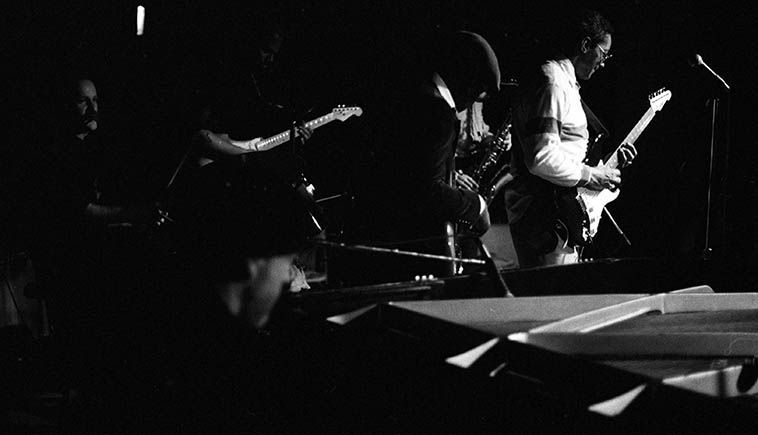 I couldn’t believe my luck when Janet & I were visiting Chicago that winter for a few days and read in the papers that Hubert Sumlin was bringing a band into Cottons —- I spent my teenage years blown out of my sockets over Sumlin’s guitar on Howlin’ Wolf’s records and here he was: Hubert Sumlin & The Nightcrawlers: Mark Burmback, piano; Sam Burckhardt, tenor; Shad Davis, guitar; Hubert, Stratocaster & vocals; Tom Sheely/Sheady? drums; Bob Stroger, bass —- December 9, 1988 — photo by Mark Weber 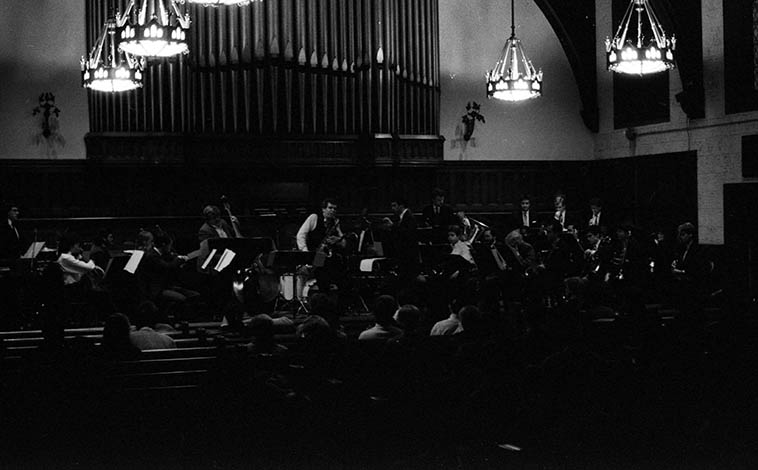 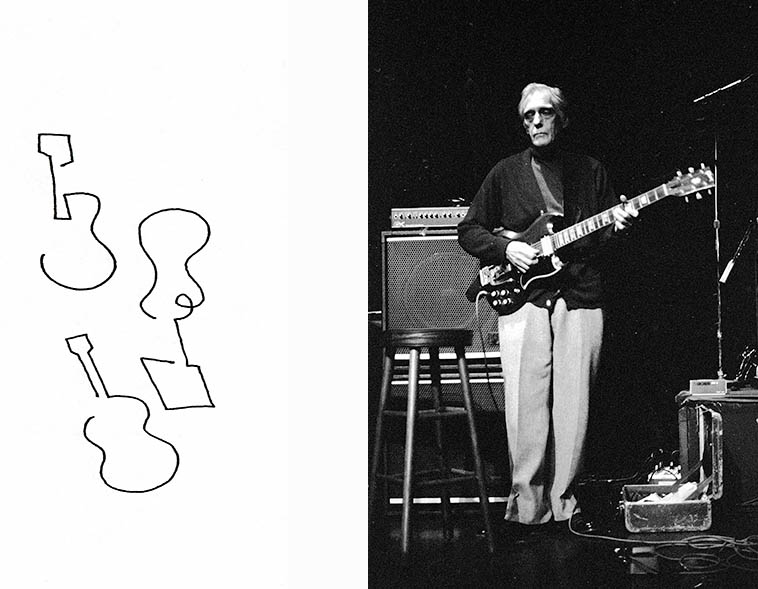 Bill DeArango — April 9, 1989 — Cleveland — photo by Mark Weber —- This guy was out of sight, whew, the years I caught him in Cleveland he had a homemade amplifier and a highly modified guitar and he went OUT as the mood took him —– He is known for his mid-40s work on 52nd Street and making records with Dizzy & Bird & Max, Ben Webster (we’ll listen to some these on this show), Red Norvo, Erroll Garner, Don Byas, Al Haig, Charlie Ventura, etc and back home in Cleveland in the 60s he had a band with Ernie Krivda and kept things going as a guitar teacher 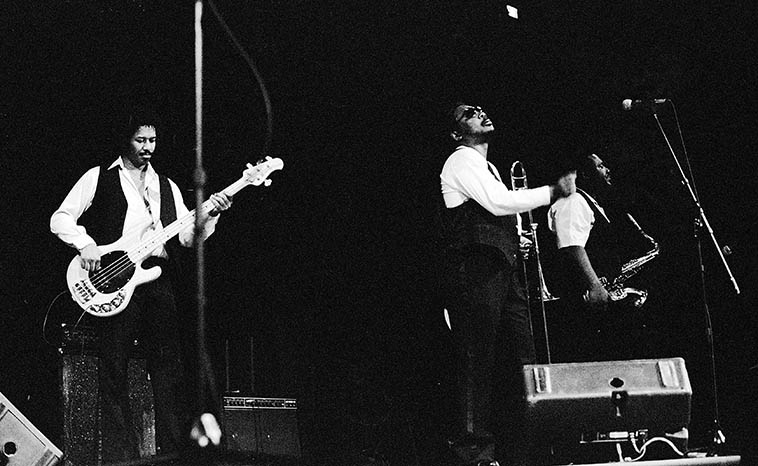 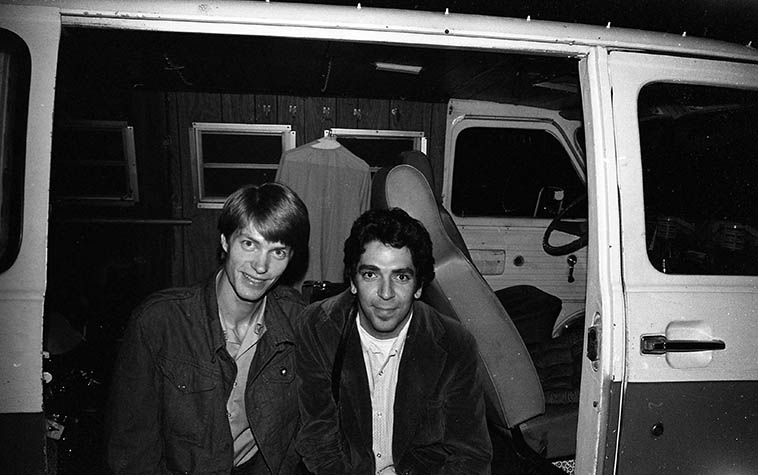 Whew, we still look wet behind the ears! That’s Nels Cline and myself sitting in an equipment van somewhere in Los Angeles — May 15, 1982 — photographer unknown —- It might have been on one of the sessions for Nels’ first album, the duet record he made with Eric Von Essen, that I got to write my first ever liner notes ( ! ) Long player album was called ELEGIES (Nine Winds) — But I see here that that record came out in 1980, so, that photo is from some other time . . . . . 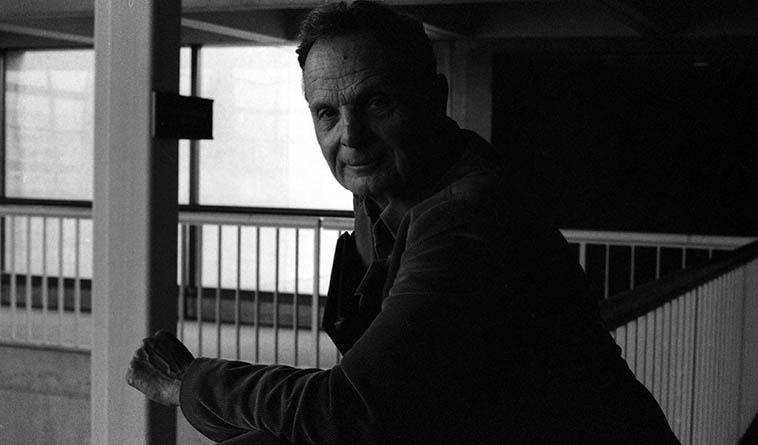 You can tell by Norman O. Brown’s look that he was amused by me —- There was a literary conference going on at Cleveland State University and I had heard that Norman O. Brown was there, and so I conspired to be nearby in a bar having a few drinkie winkies that afternoon (took the day off from work) and although I couldn’t afford the price of the conference I did find Dr Brown in a hallway and when I told him how much his LIFE AGAINST DEATH (1959) meant to me he turns around and asks me what I thought it was about –gulp– I remember a dozen academics in tweed jackets (with the leather patches on the elbows) crowded around to watch me go down in flames, and I told him that to me his book was an extension of what Freud was going on about in his last book Civilization and it’s Discontents, that it was a summary of history from a 20th century psychological point of view —- He accepted that, generous person that he was, and told me he has a son named Mark, he told me that his friends call him Nobby and I was to do so, as well —- He was about to deliver a paper and asked if I wanted to hear it, well, of course, he took me and sat me right in front of the podium —- After that I had a modest correspondence with him, having sent him some of my chapbooks —- photo by Mark Weber — October 23, 1986