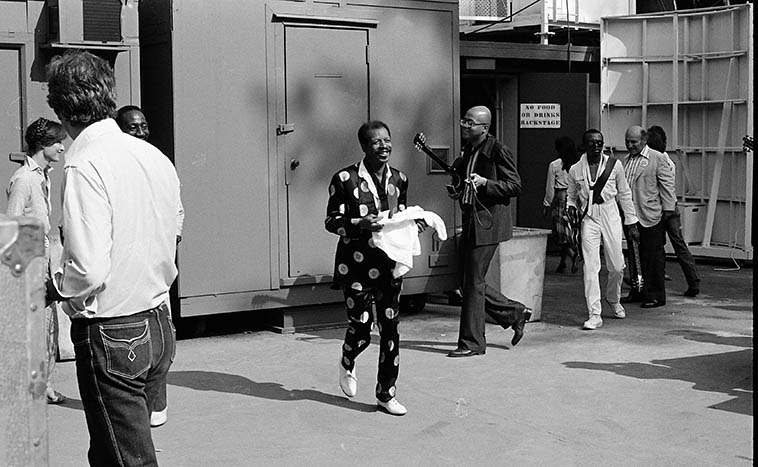 Ornette and his band coming off stage at Hollywood Bowl Playboy Jazz Festival —- June 19, 1982 —- photo by Mark Weber —- two drummers two electric bass two guitarists and Ornette out front playing the blues —– He really made me a believer that day, with his electric thing

From my way of thinking,
A true artist never endeavors to
Be “original” or go out of their way to be different

Expression comes from natural sources,
Yes, of course, one is acculturated within one’s world
And that is part of who you are, definitely
And organically, no escaping that

Anything else would be
Bending toward marketing strategies
And sales, and embracing novelty just to be
Different —— Being yourself is the trick,
It comes easy for some and for others
It involves peeling back
The layers of the onion 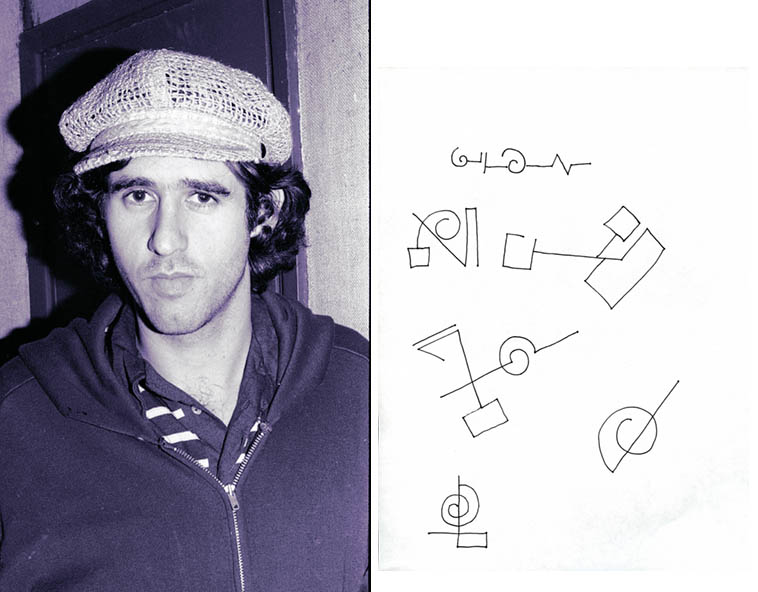 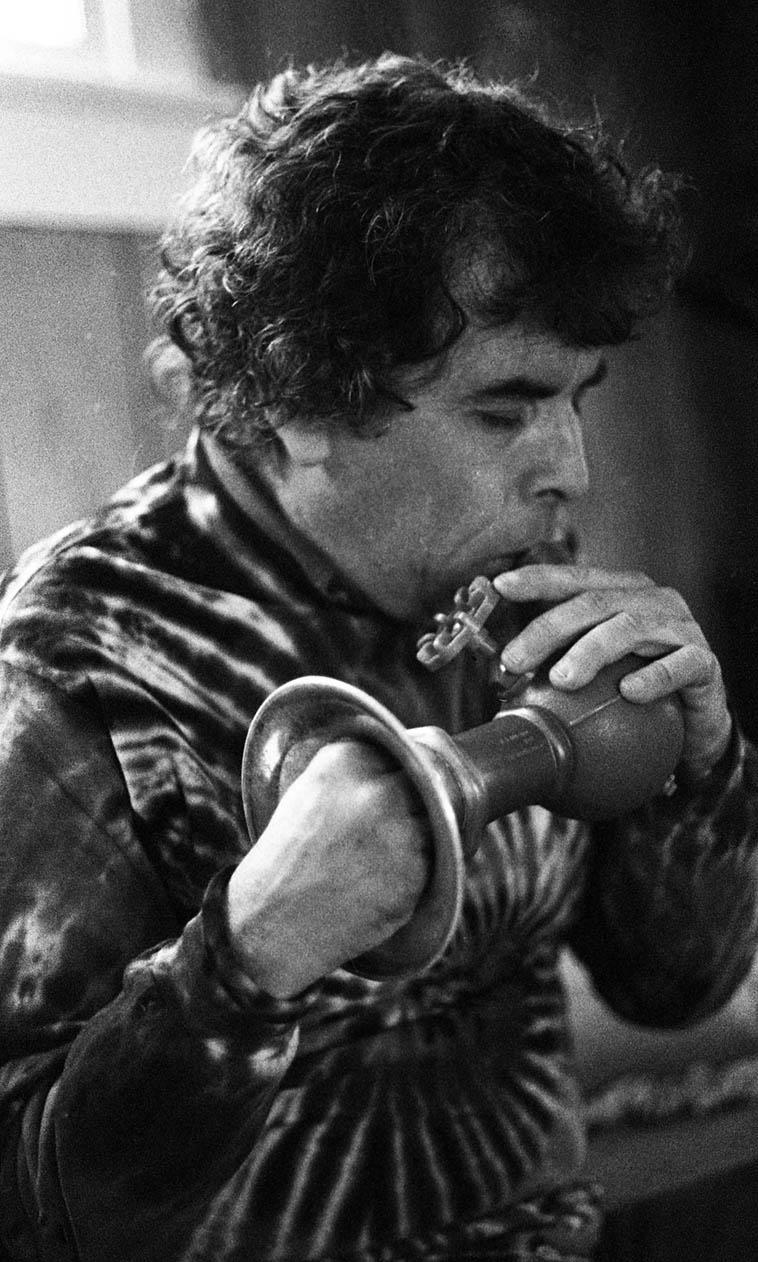 Legendary Los Angeles poet & jazz nut Michael C Ford visiting us in Salt Lake City, Utah —- photo by Mark Weber – May 24, 1990 (we lived in Salt Lake two years while Janet did a residency at the V.A. Hospital, before we moved down here to Burque summer of 1991) —- Michael insists that valve actually changes the sound on this plumbing trumpet —- His telephone back then said: “Okay, I know, I know,” sounding like he just woke up, “It’s an answering device okay? After the beep, leave me a message, you know the routine, you drop it, and I’ll pick it up, okay, bye” ———- Another time, I was walking along with Michael C Ford, with Joan & Fred, and I think Marilyn, we were on the palisades of Long Beach near the pier and the fishermen had their day’s catch out on tables for sale, and one table had seven little fish all lined up in a row, and I said, Hey, look! And Michael not missing a beat said, “Yeh, the Lighthouse All-Stars” 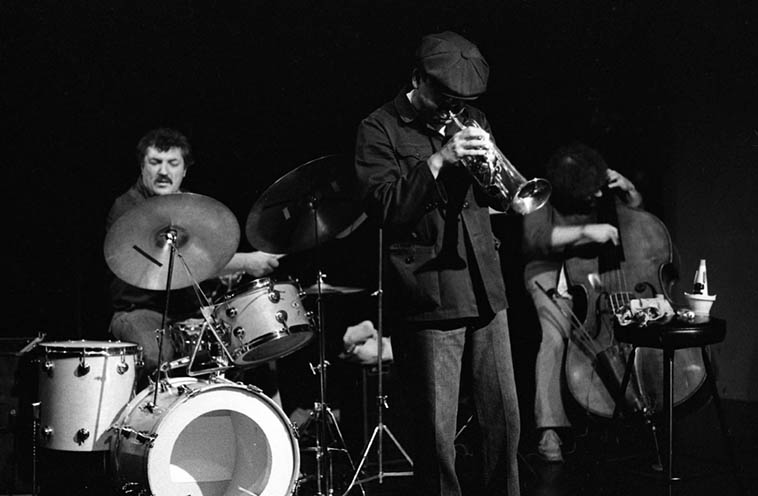 Bobby Bradford in trio with Bert Karl(drums) & Noah Young(bass) @ Century City Playhouse – October 21, 1979 – photo by Mark Weber – We will be talking with the maestro via telephone on this radio show this day from his home in Altadena, California —— I plan to ask him about Ornette in the 50s and Ornette’s impulses to create the music that he did, it’s going to be fulsome. 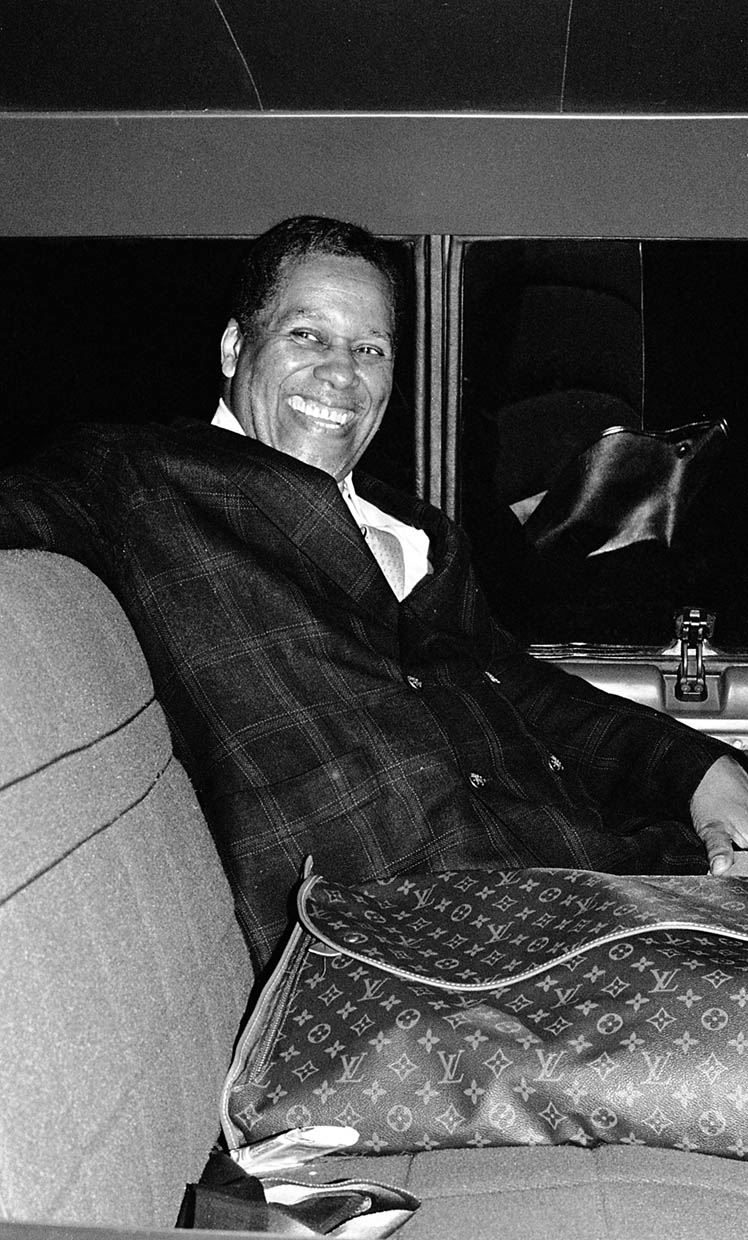 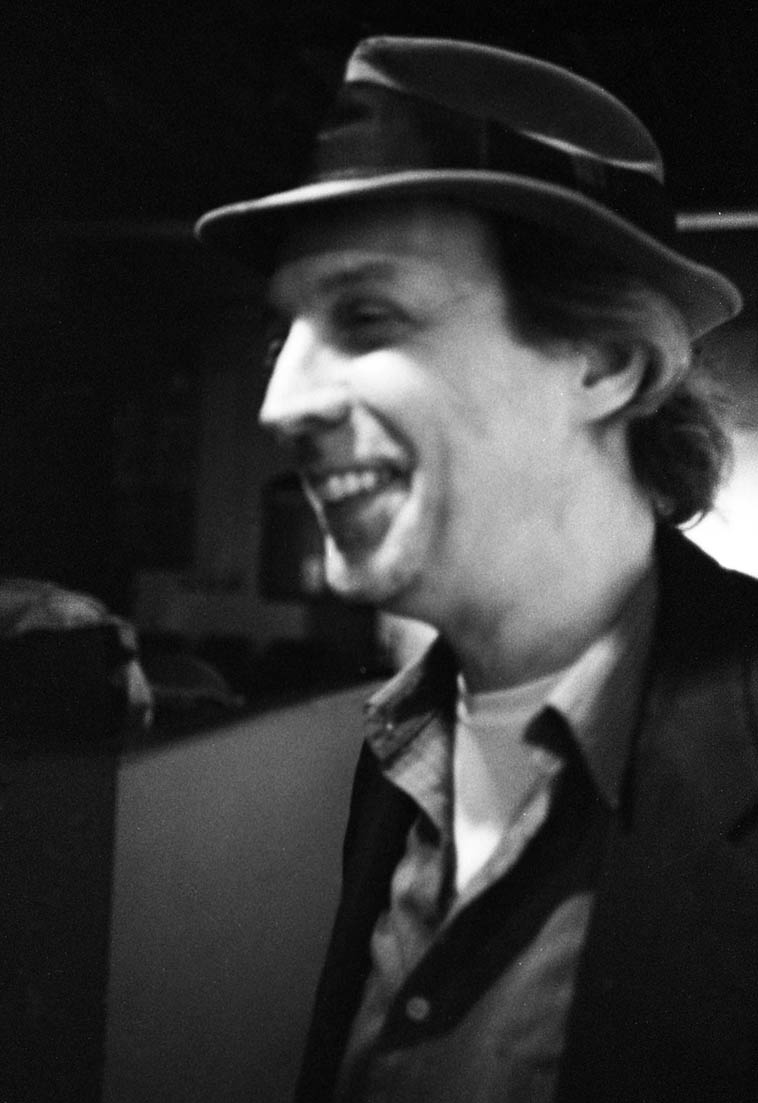 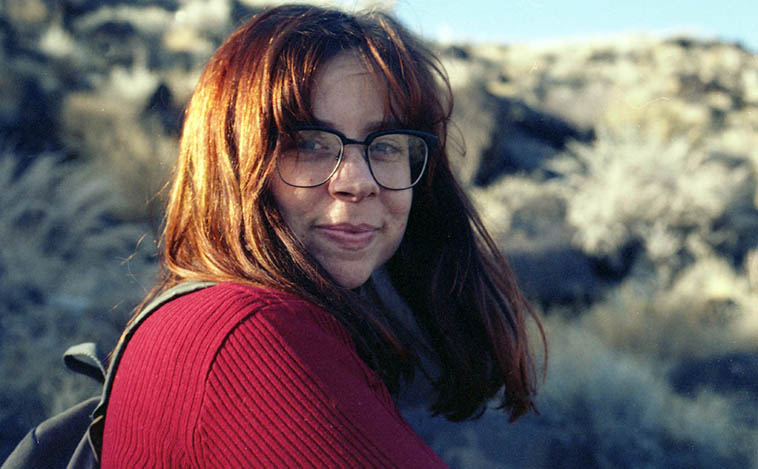 Violinist Rebecca Lynn visiting us from L.A. – she’s the daughter of poet, the late Cathy Lynn of Long Beach, of whom we shared a book publishing together (her side was THE OBSESSIVE COMPULSIVE GUILT-RIDDEN TERMINAL MOTHER, mine was my usual stuff (Zerx chap #26, 1992) —— photo by Mark Weber on the West Mesa, Albuquerque December 26, 1992 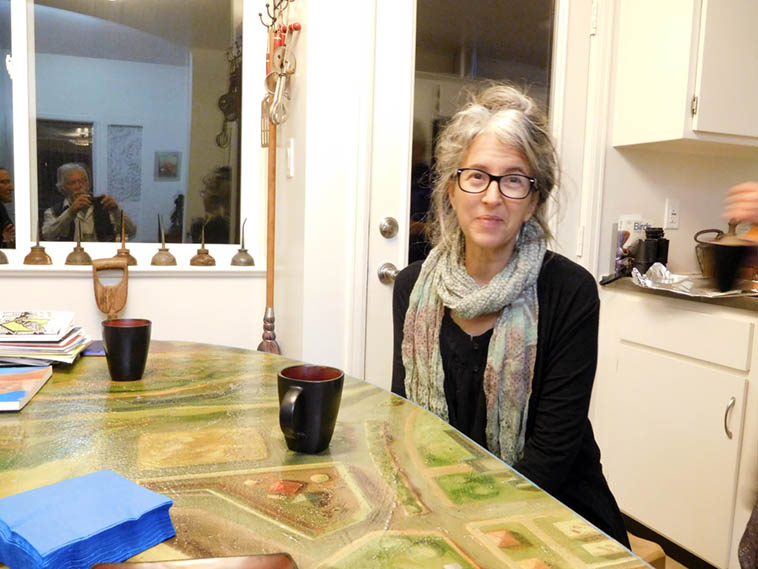 Janet Feder in Denver —- photo by Mark Weber – October 29, 2o16 —- A supremely talented and gifted and transcendent guitarist (see her website) — She will be performing in Corrales (an outlier village of Albuquerque) Sunday August 4 @ 7pm at Live At Thrive, 4685 Corrales Road —- She plays all kinds of guitars, one of the ones that has always fascinated me is when she “prepares” the guitar which is hard to describe, you’d best see to see ——- Here’s a story: (this is genius) Janet is trained as a classical guitarist although she struck out in other directions, but I was curious how she would play Bach and after quite some nudging on my part she relented, but not quite! She took the strings off her guitar and put them back in random order and tuned them to their conventional tonality, so, the guitar was no long EADGBE, I don’t know WHAT it was, THEN she put the Bach sheet music in front of her and played it by sight as if the strings were in the right order (I wonder if she put on ear mufflers, so as not to be confused?) and you can hear this on the compilation ALBUZERXQUE Vol. 13 as “Wrong Strung Prelude” 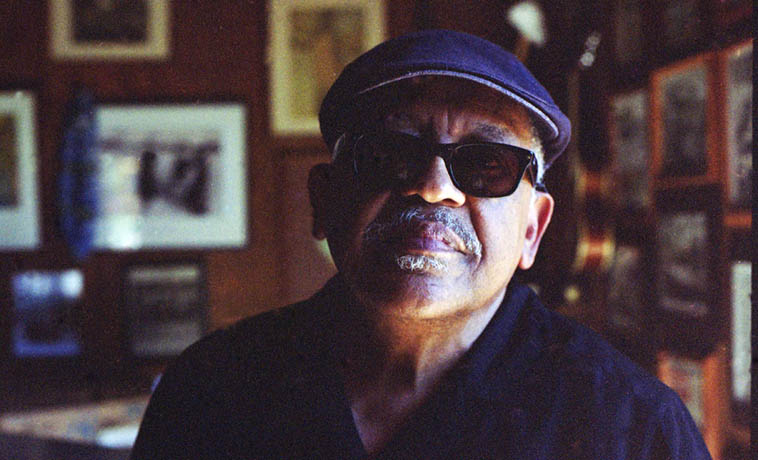 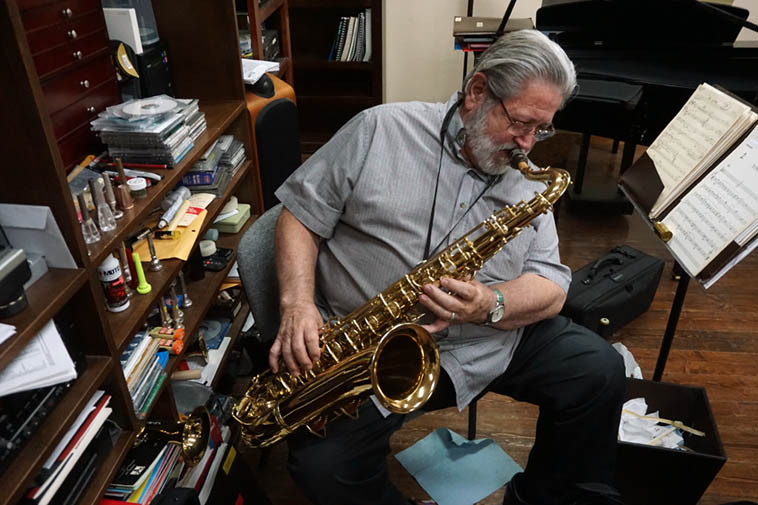 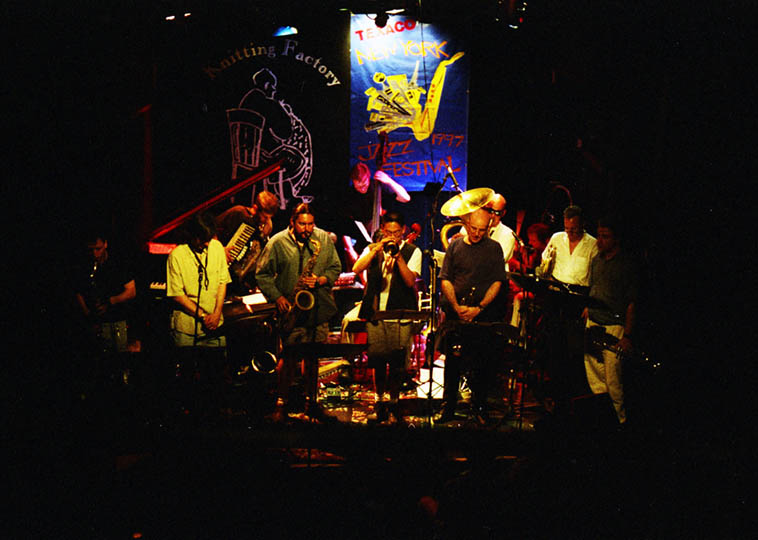 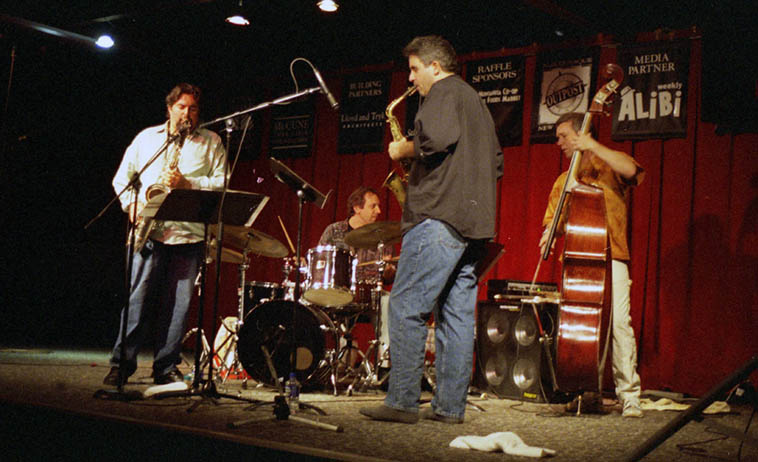 The Schulldogs at the Outpost Performance Space, Albuquerque —- November 13, 2000 — George Schuller(drums), Ed Schuller(bass), Tim Berne(alto), Tony Malaby(tenor) —- photo by Mark Weber —— George Schuller is bringing his group Circle Wide Quintet to Albuquerque next week playing the Route 66 Summerfest street party on July 20th AND on the 21st at the Outpost screening his documentary film The Modern Jazz Quartet: From Residency to Legacy(2o18) 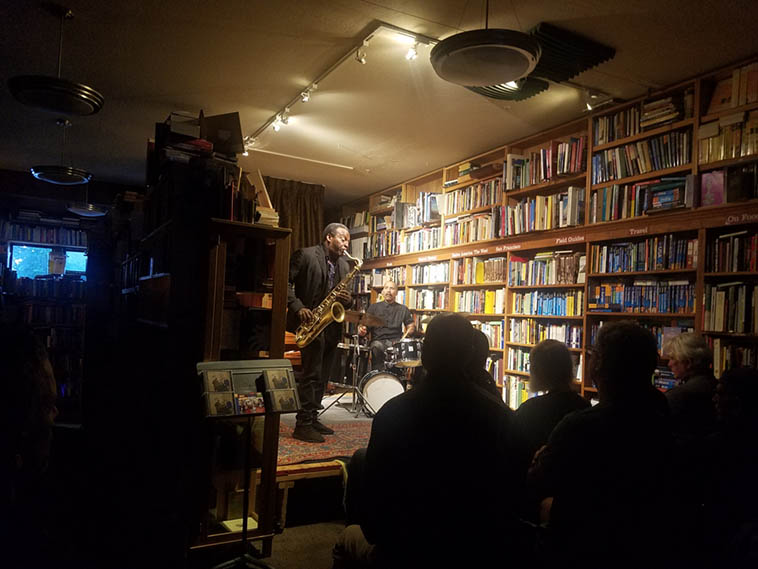 David Murray & Kahil El’Zabar hold forth at Bird & Beckett Bookstore in San Francisco (653 Chenery Street) a regular stop for them from what I understand —- they also played in Los Angeles on this swing —- Cell phone photo by my long-time friend George Brooks —— Monday July 1, 2o19 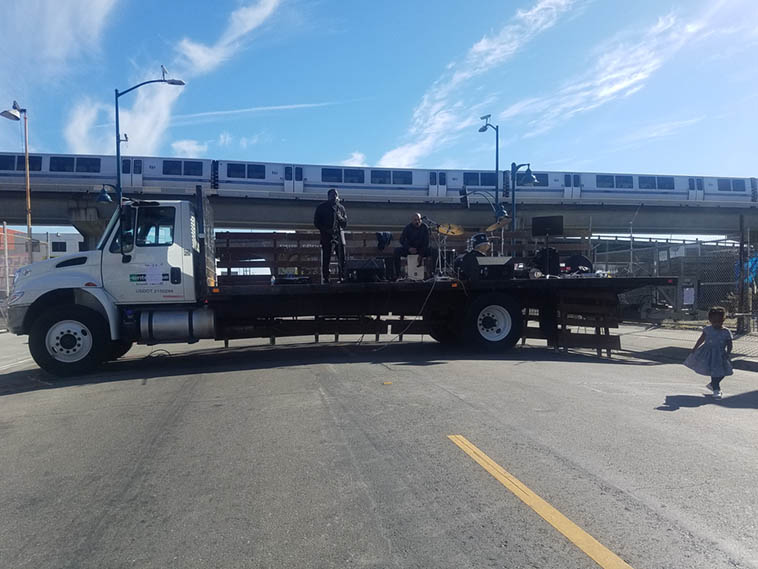 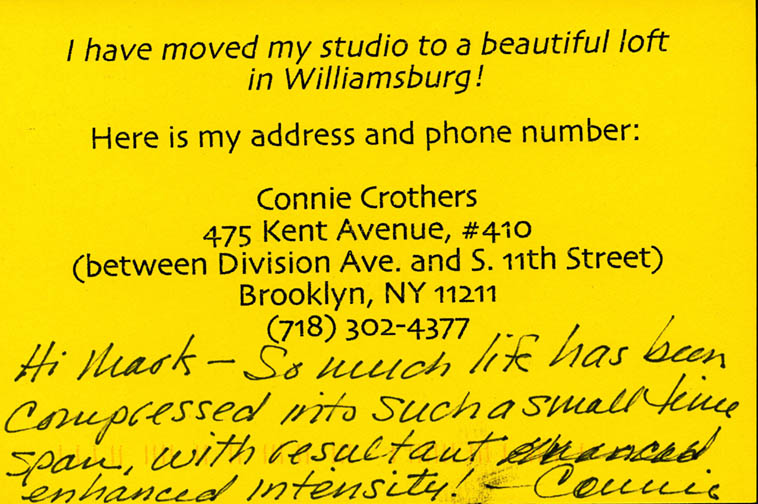 Connie mailed this postcard to me here in Albuquerque on March 11, 2002 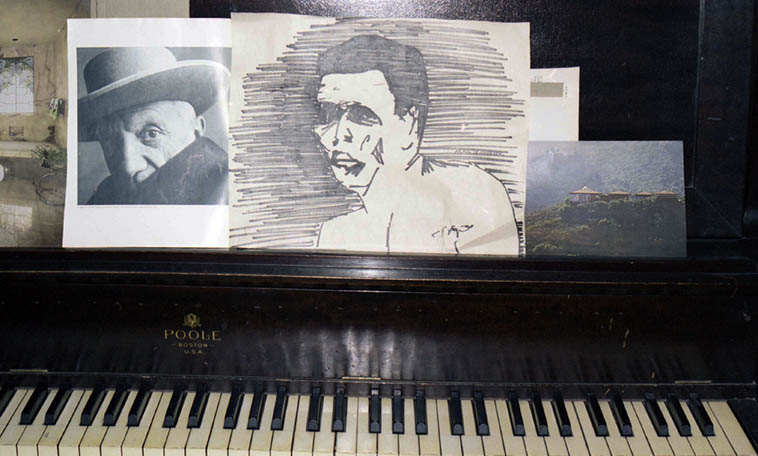 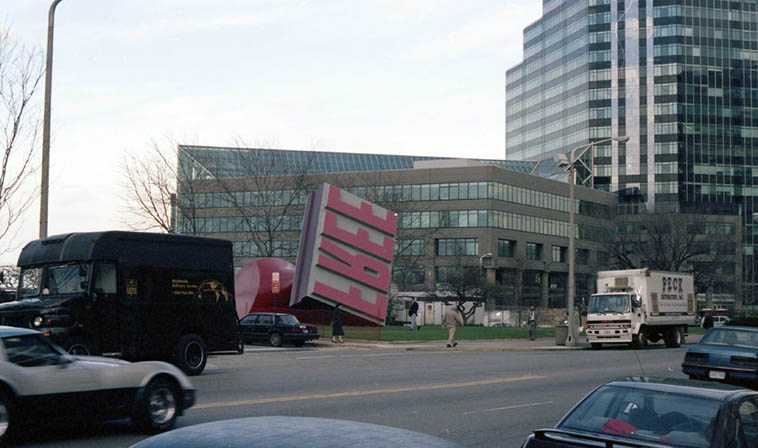