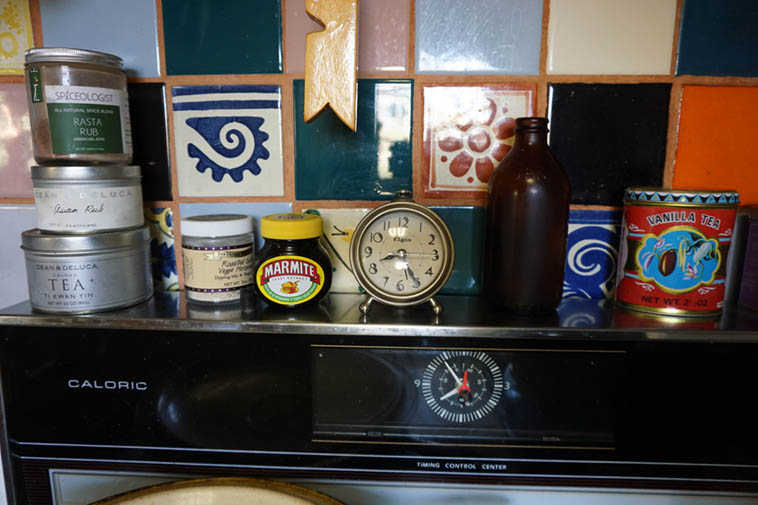 Marmite is some weird schmutz that English people like to put on their toast, once was enough for me, and I haven’t a clue what that “Rasta Rub” is, you have to ask Janet —- I keep that old brown bottle because it has molded into the glass: No Deposit No Return, remember those days? —- photo by MW in our kitchen last November

We all have different
……………….Or varying opinions
These are conditions of the mind
……………….sayeth the Buddha
Or, as the old Black man told the young Mark Twain:
“Tell me where a man gets his corn pone and I’ll
tell you his pinions”
Mas o menos
More or less
Whenever I’m spinning over the airwaves
Something from the avant-garde
I almost never pick up the phone
It’s usually not friendly —-
At my stage of the game
It all fits together, of course,
I can hear the distinctions (that’s another
thing the Buddha cautions against: distinctions/discriminations,
of which I sorta disagree, back when I was a wine drinker
I certainly could discriminate
between a Gallo port and a California burgundy, a not
unuseful distinction)
I was telling Bradford the other day
How, in reflection, when I was 17
or 18 my over-riding attraction to the avant-garde
was its audacity,
for example, the first time I ever heard the name
Cecil Taylor was when a friend said: “There’s this
guy who plays piano solos for two hours!”
and I said Wow I’ve got to hear that! —-
I had told Bobby that in some regard
I’ve lost the ability to understand what’s going on
in some of these long solos, my brain is conditioned
to hear melodic development or variations
on a rhythmic motif, I’m lost otherwise, I’m a
Lestorian, I want to hear a story ———- which
harkens the time Coltrane commiserating with Miles
admits he didn’t know how to stop these long solos
and Miles said: Take the horn out yr mouth —-
Otherwise, it just turns into jazz wallpaper —-
Sitting at table in my favorite taco joint yesterday
I overheard a fellow on cell phone say “No lo creo”
(I don’t think so)
Of which, the Buddha would agree 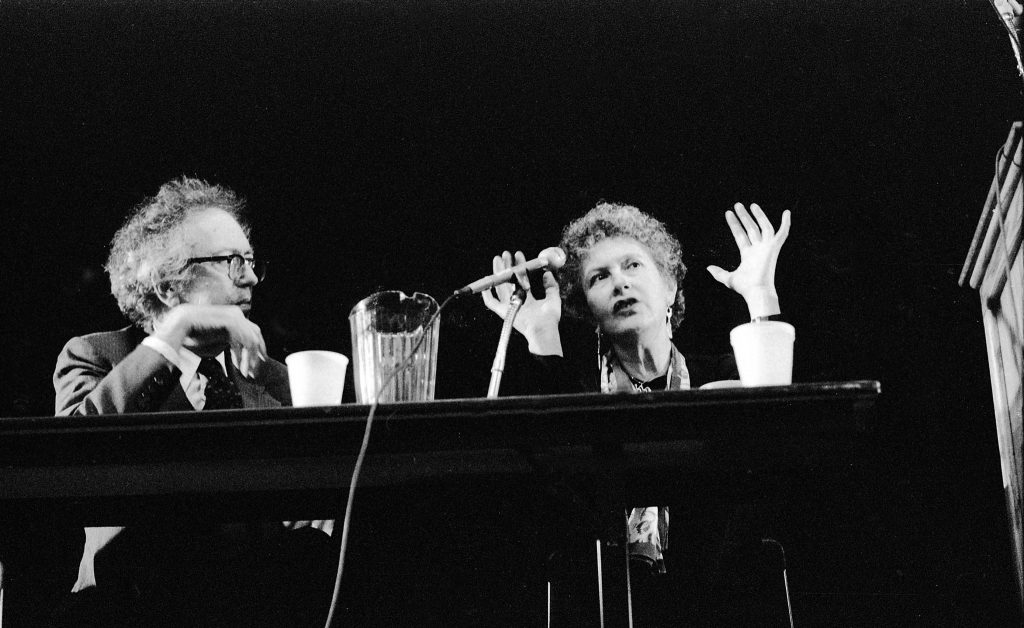 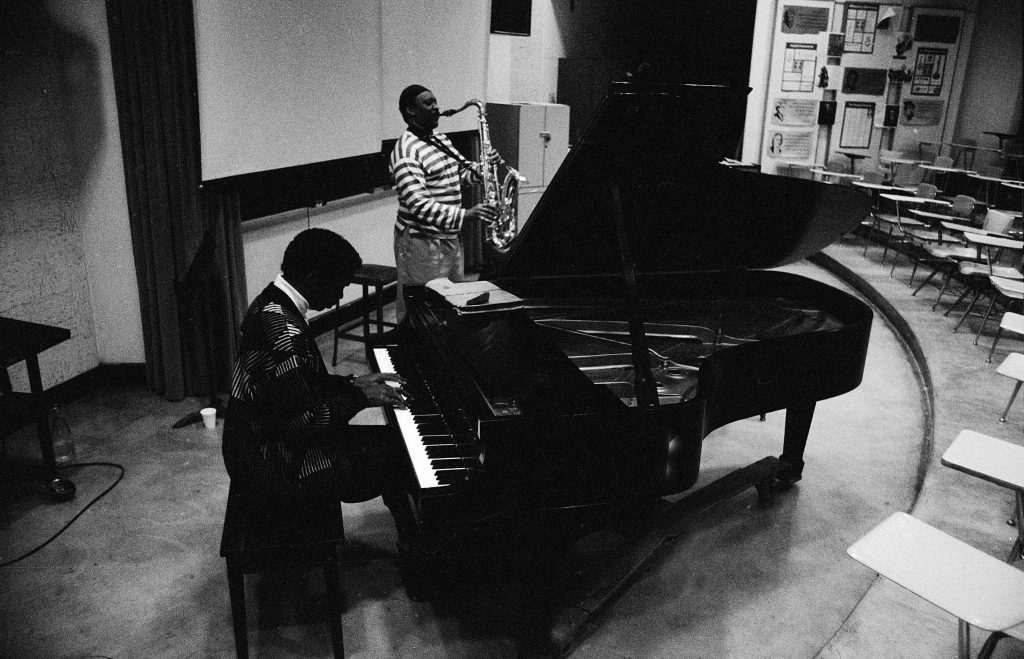 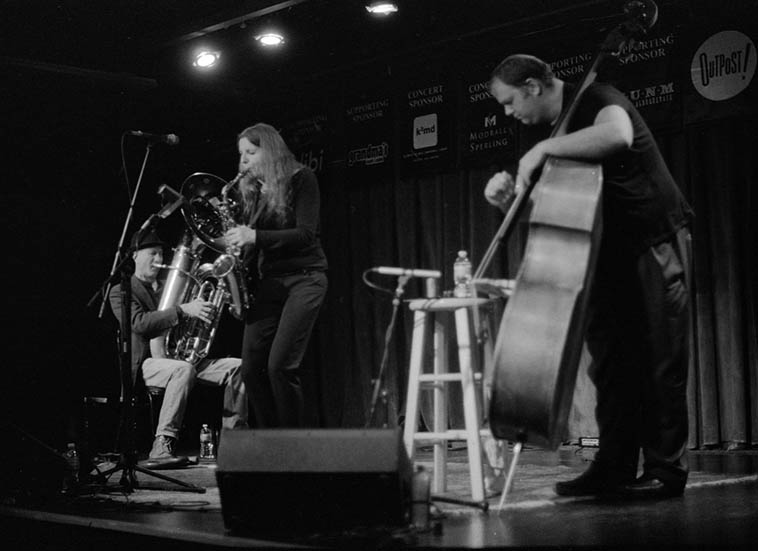 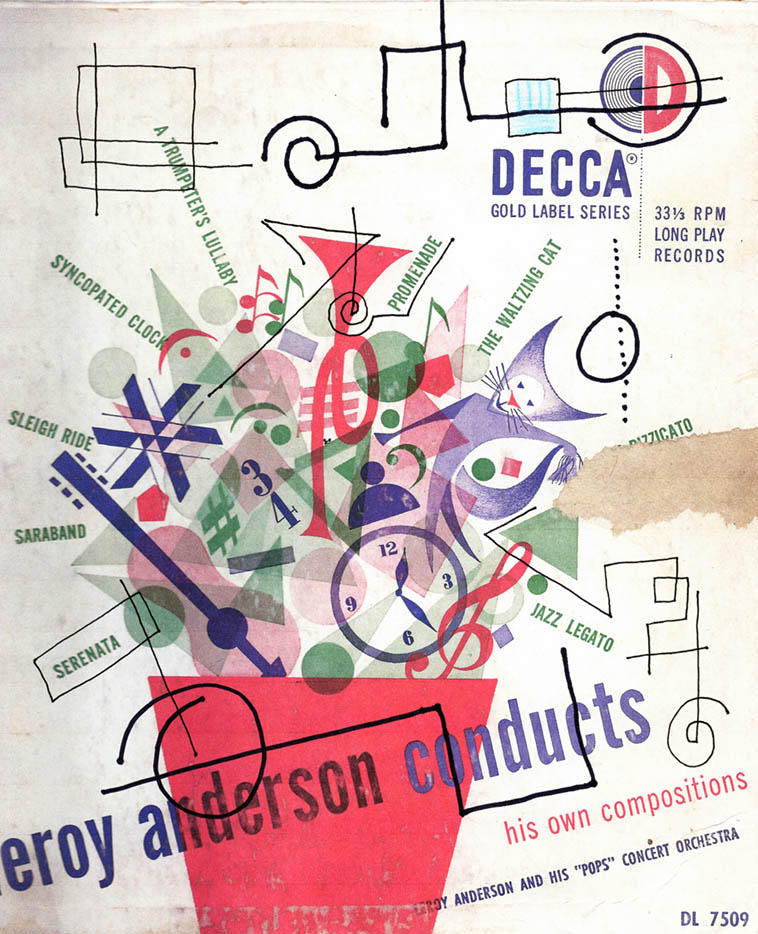 This exquisite cover art by Erik Nitsche, 1950 on a 10” 33rpm disk by Leroy Anderson —- I made a photocopy before I added my own doodles ————— Line drawing manipulation 17dec2o19 by Mark Weber 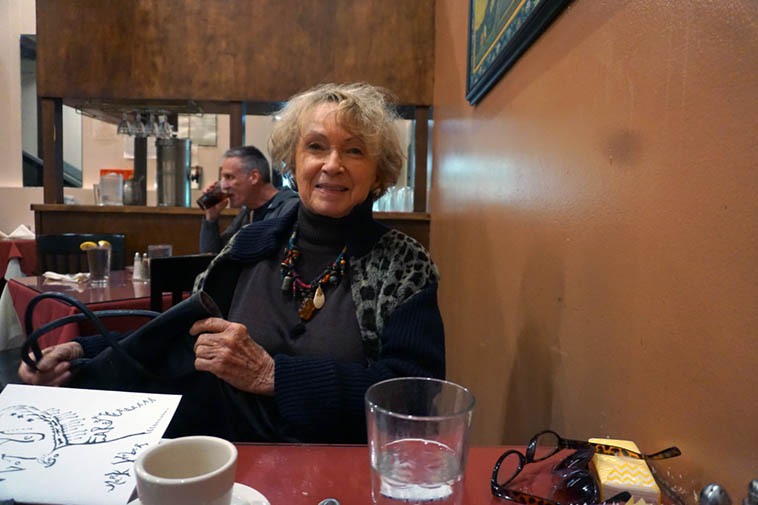 New flute player (and singer!) in town: Libbie Jo Snyder, recently abandoned Los Angeles as the traffic was too much and now she’s settled in Albuquerque —- photo by Mark Weber January 27, 2o2o at Taj Mahal lunch 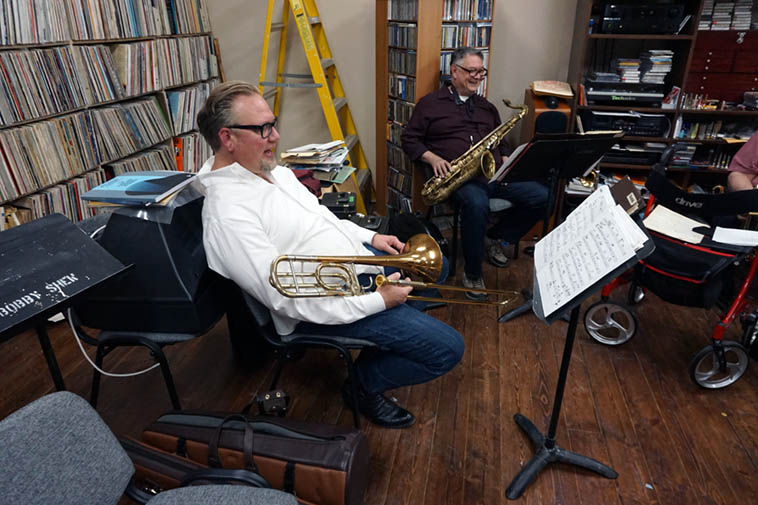 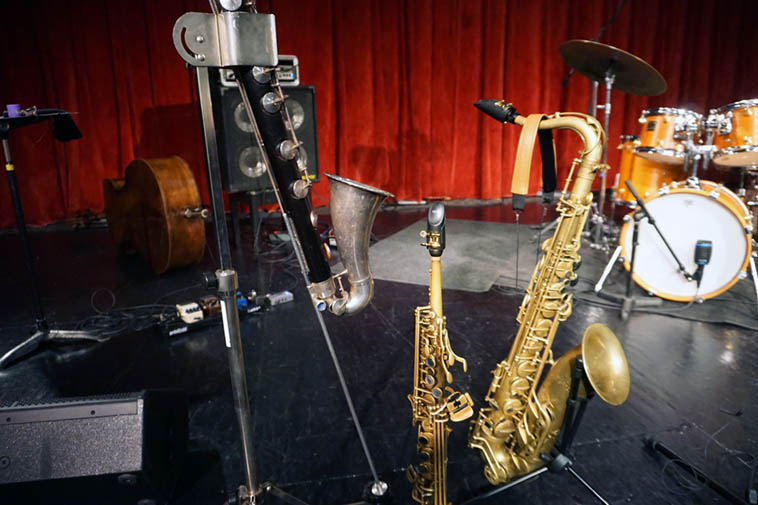 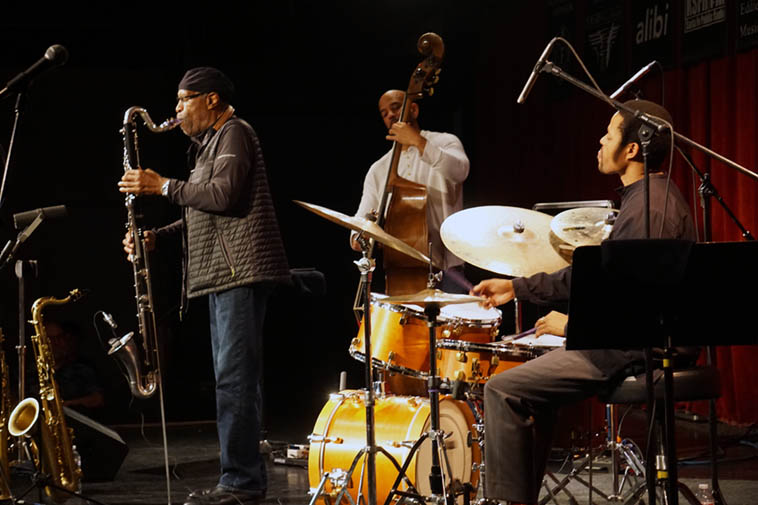 One of the greatest most soulful versions of Body & Soul was heard this night when Bennie picked up his tenor (I sure hope all those mikes means they were recording?) —- a trio called Options: Bennie Maupin (woodwinds), Nasheet Waits (drums), Eric Revis (bass) —- October 31, 2o19 – photo by Mark Weber 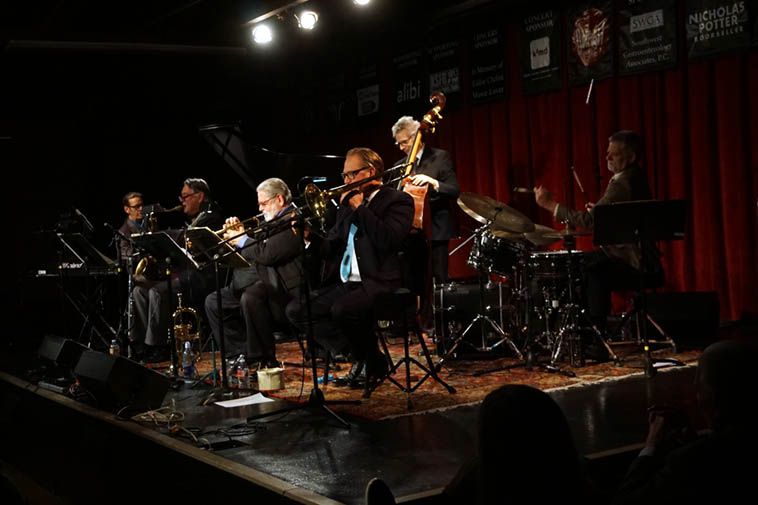 Bobby brought this rocket ship of a band into the Outpost on December 12, 2o19 and blew us back into our seats for a full non-stop 2 and one half (2 ½!) hours —- the Bobby Shew Sextet: Micky Patten (bass), Cal Haines (drums), Jim Ahrend (keyboards & piano), Shew (trpt & flugel), Alex Murzyn (tenor & flute), Chris Buckholz (trombone) —- photo by MW 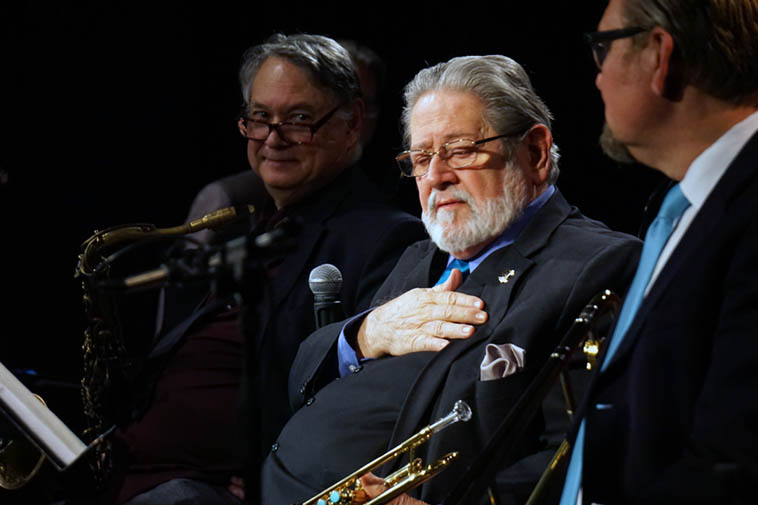 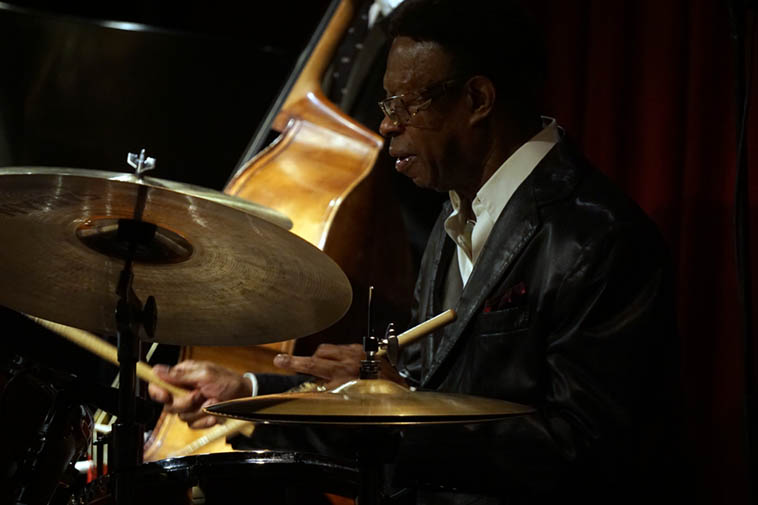 Louis Hayes —- November 22, 2o19 —- photo by Mark Weber —- When Louis came off the stage and walked passed us where we were sitting against the wall, I said “Louis, thank you for coming” and he said, “You’re welcome.” 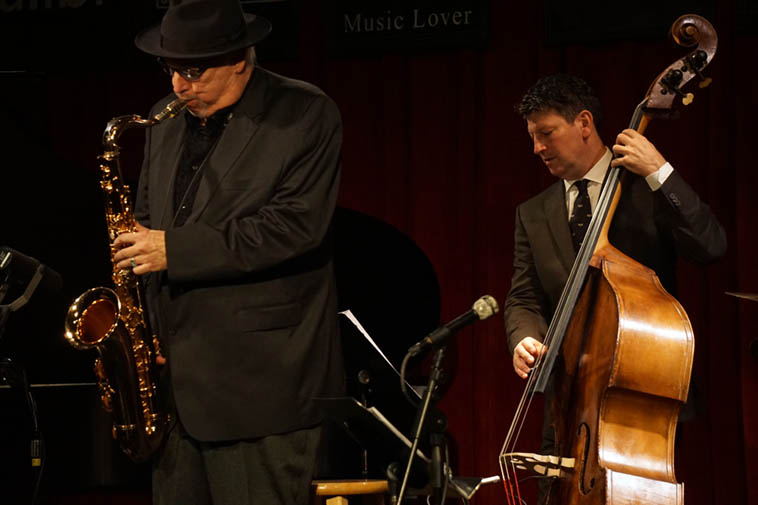 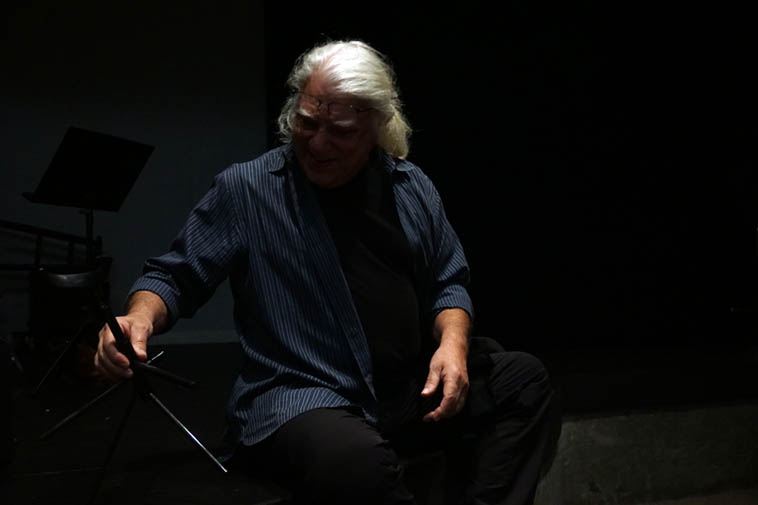 Reading through the last few months of dOWNBEATs and over the last few years I am always struck with how much I don’t know about all the new artists, of which there are a glorious abundance. I wish we could find a young person (most of this music is younger than me) who has a solid knowledge of all this new stuff to be a disk jockey at our station. I’m only one person, is my argument, as to how come I don’t jump into it, also, my show is only 83 minutes. AND more to the point, is something Vinny Golia pointed out to me back in the mid-90s, and that is how hard it is for new artists to compete with all of the jazz re-issue programs going on. There was a 20 year period where everything was being re-issued. If you think about it, there were no comprehensive re-issues before the CD era, which I’ll date to 1990 (simply because much of what was released on CD before then has quirky mastering). And I think there isn’t much else to re-issue anymore, after that avalanche. Myself I have immersed myself in all the small West Coast labels of the 1950s that saw re-issue. And that was a glory of music. But the situation for current artists with their new music competing against past glories is something I had never thought about until Vinny brought it up. Photo of Vinny – November 17, 2o19 by Mark Weber 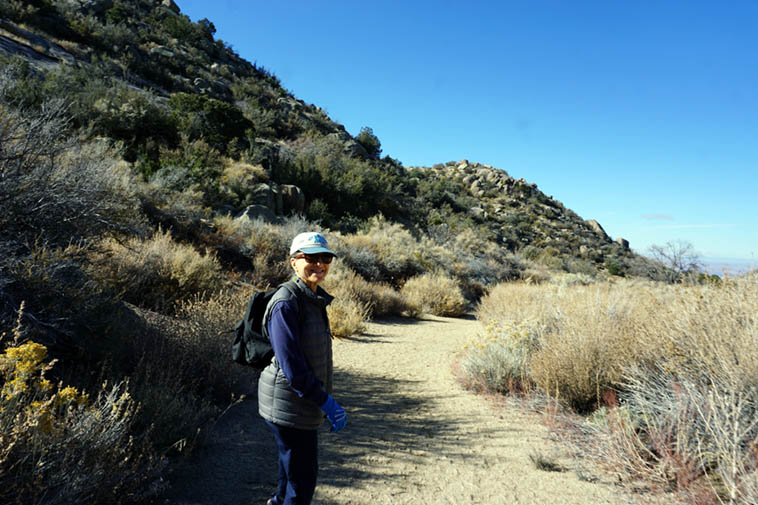