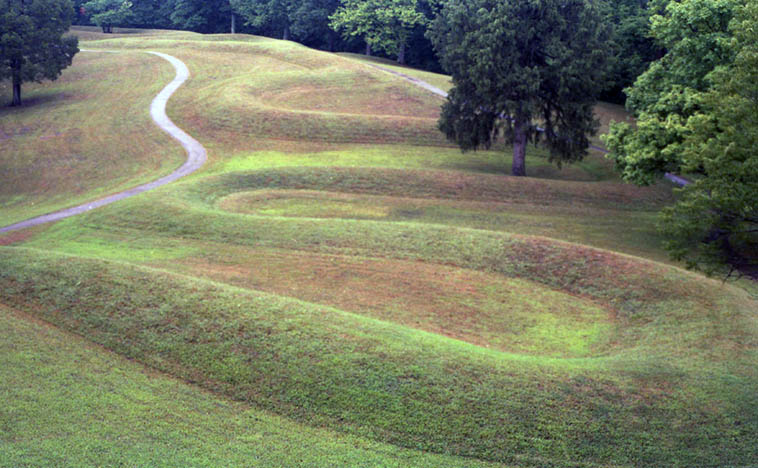 Great Serpent Mound, southern Ohio —- August 10, 1986 —- photo by Mark Weber —- This was my first summer in Ohio and the humidity took some getting used to —- Great Serpent Mound could be almost 3,000 years old, or only built in 1000AD, it’s still under investigation —- I love that it’s situated on the site of a millions-year-old meteor strike, although, by the time the Woodland Cultures came along it was all but obscured, BUT somehow these people knew something had happened on this hill

We go to music for pleasure, and that is still the best way. Others want to look under the hood and dismantle the gears and see why. Musicians, of course, need learn the mechanics of how it works. Your culture instills in you your aesthetic. Still, pleasure and enjoyment is the supreme relationship one should have with music. Some of us get too serious and want to sit around analytically stroking our intellectual goatees, while someone who wouldn’t know a diminished chord from a Lydian scale are sitting there in pure pleasure. They are there. They are in it. We serious guys overshoot the mark. We think too much. We have our theories and stratagems. Ah, “stratagems.” And if we really want to impress the hoi polloi (for we presume we are smarter than them) with our bafflegab we can use words like counterpoint, contrapuntal music (same thing, different tongue), raised-5, tri-chord, suss chords, enharmonic, and the supreme baffler: post-deconstructionism. Which, I highly recommend you do not look up. It’s nonsense. Some brainy guy wander’d up a dark alley and thought we all should know about it. Us humans can crank out the baloney by the yard, while some unsuspecting “simpleton” is in absolute rapture over a monotonous backbeat and rhyme scheme even an Anglo-Saxon would avoid. Who’s to say that’s not meaningful? It’s all a matter of what you require from music. Beauty reigns supreme. (The best definition of beauty I have ever encountered is: the uniformity of consecutive numbers, 1, 2, 3, 4, 5, 6 . . .)(That definition neatly sidesteps our acculturations). Myself, I’m maybe overly cautious and/or suspicious of having my emotions tampered with. Being emotionally manipulated.

(Or, as Richard Towne, KUNM General manager says: I don’t like to be assaulted by my music.) Some bands think that’s what it’s all about: getting out there and shocking you and in some cases, excoriating you into some ill-defined version of revolution (with no particular game plan post-revolution, if you succeed in burning the whole place down). Gawd, I hate it when I get into these polemics based on opinions (mine, in this instance). Anyway, keep close this cautionary truism: Listening with your eyes. Just because that saxophonist is hopping up & down huffing & puffing having a tantrum doesn’t mean something musical is going down. Or the dumb trick of going loud. Not that there’s anything wrong with loud, a Beethoven symphony wouldn’t sound right at low volume. And Jorma Kaukonen’s guitar solo on “Angel of Darkness” needs to be cranked. Scare the nabors. As for the avant-garde that surfaced in jazz in the 60s and came to full glorious fruition in the 70s, at this reserve, it strikes me that there were two different streams. One was overtly political and the other was an extension of what Bird & Diz & Lennie Tristano were doing in the 50s. Some of those in-between notes and intervals were brought to the fore, even tonal centers dispensed with. Nothing really new but our ears were unaccustomed to such approaches and some of us were intrigued, and it was revolutionary, but not for that reason. Strange intervals merely broadened the palate. I’m fond of the notion that there is nothing new in music, everything comes back around, re-investigations of elements already long-since implied in music. That when something outside current conventions are employed it is hailed as new, the avant-garde. This idea is greatly expanded upon in two books: Joachim-Ernst Berendt’s THE WORLD IS SOUND: NADA BRAHMA (1983) and Lydia Goehr’s THE IMAGINARY MUSEUM OF MUSICAL WORKS (1992) that composer Butch Morris pointed me toward. He loved conversations on theory and application. 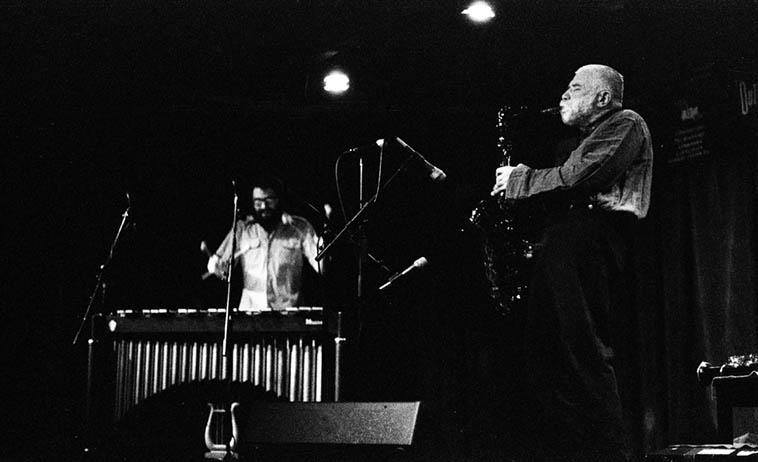 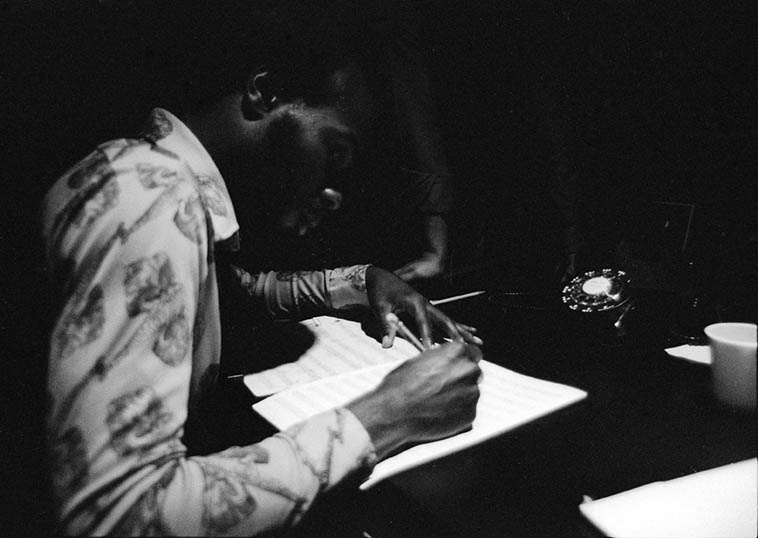 Gary Bias at United-Western Studios during the DIAL B FOR BARBRA Horace Tapscott Sextet sessions February 26, 1980 —- photo by Mark Weber —- Gary played both soprano & alto saxophone on this date. 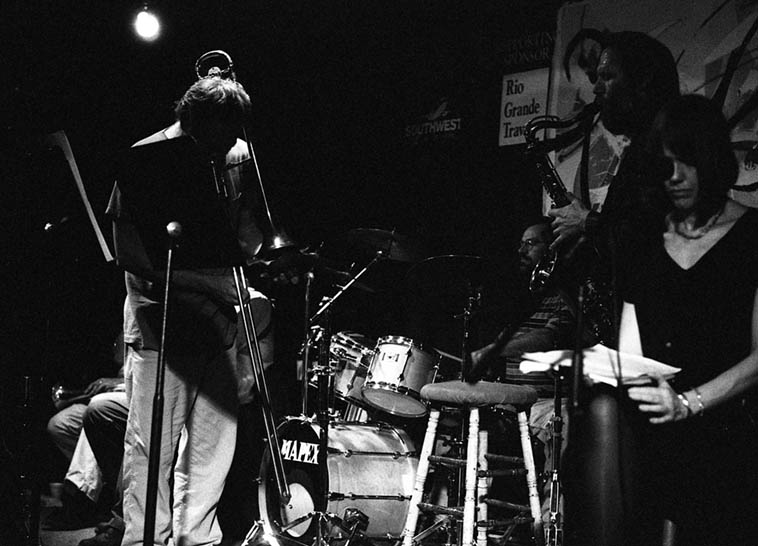 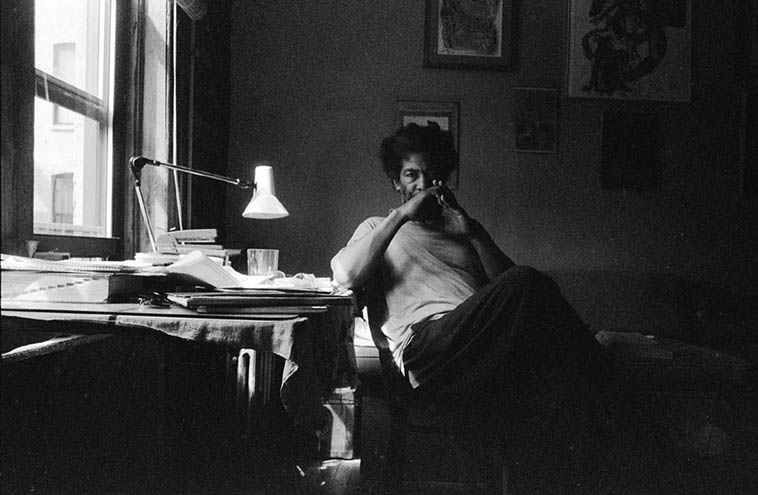 An afternoon in the East Village talking aesthetics with the creator of Conduction: Butch Morris in his apartment —- July 1, 1997 —- photo by Mark Weber 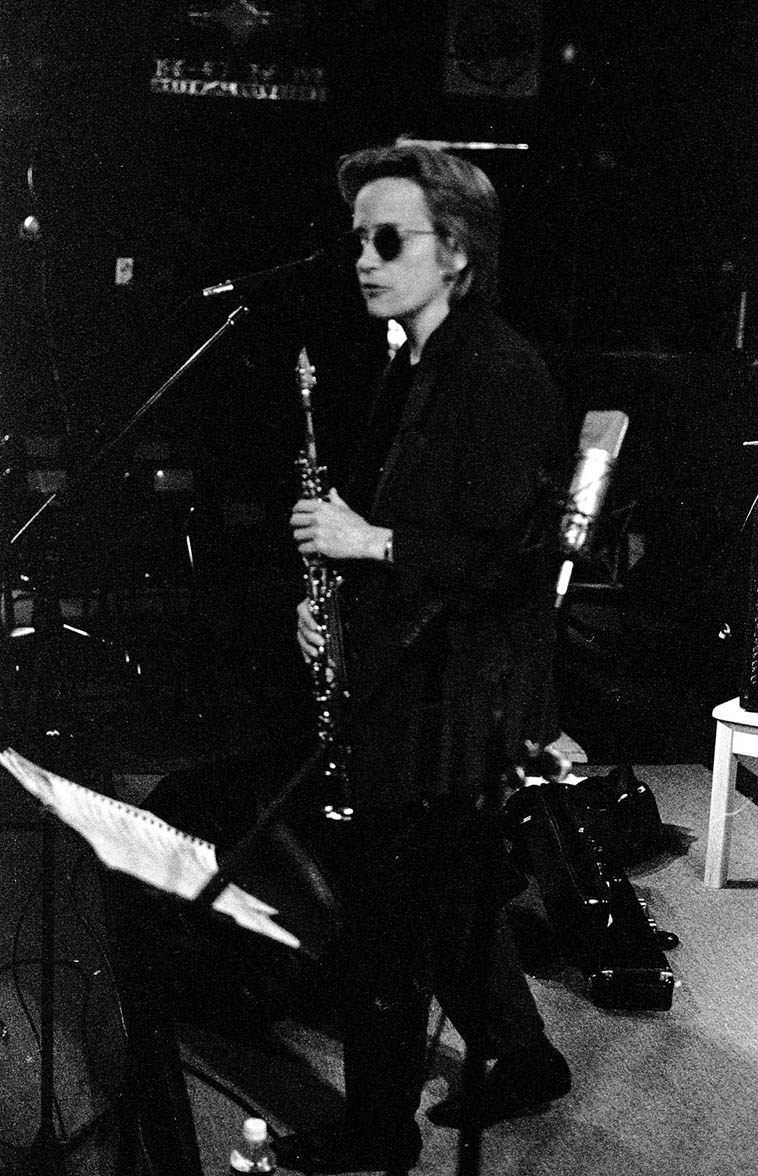 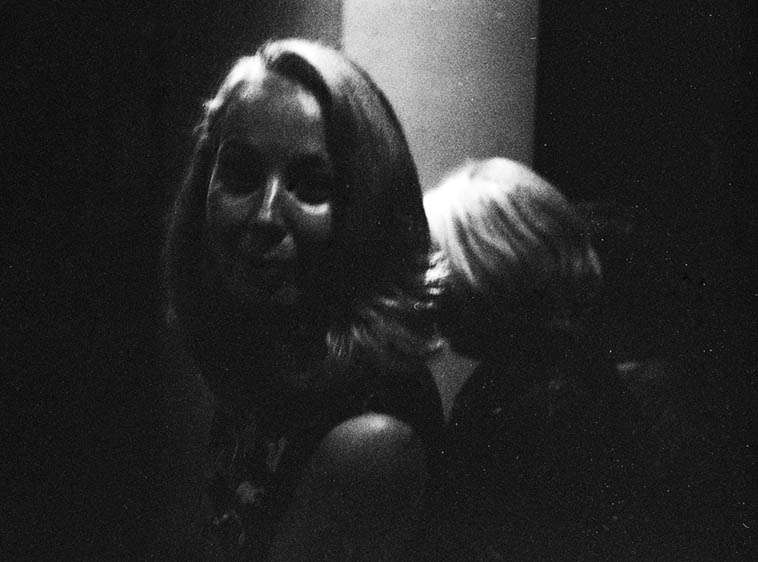 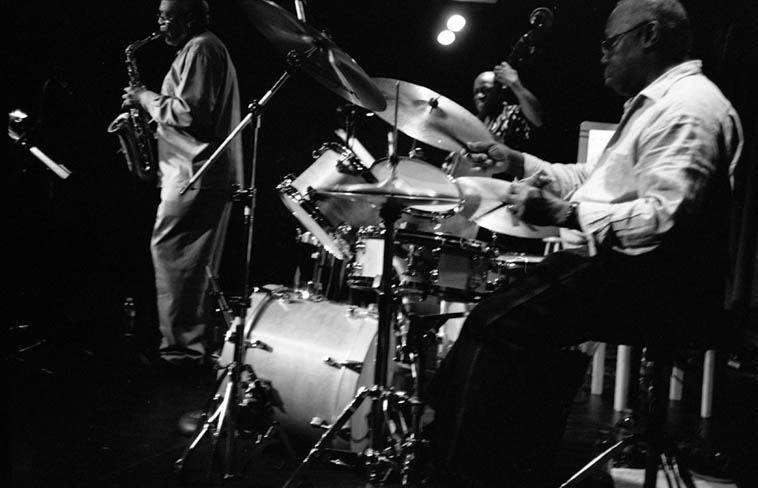 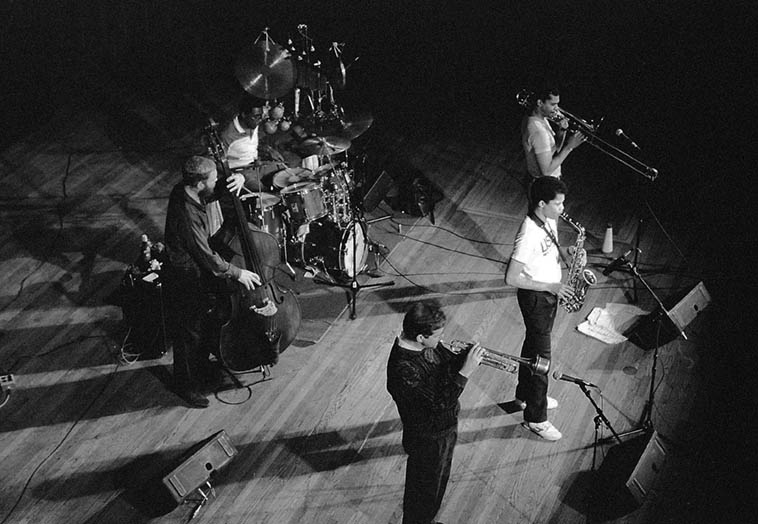 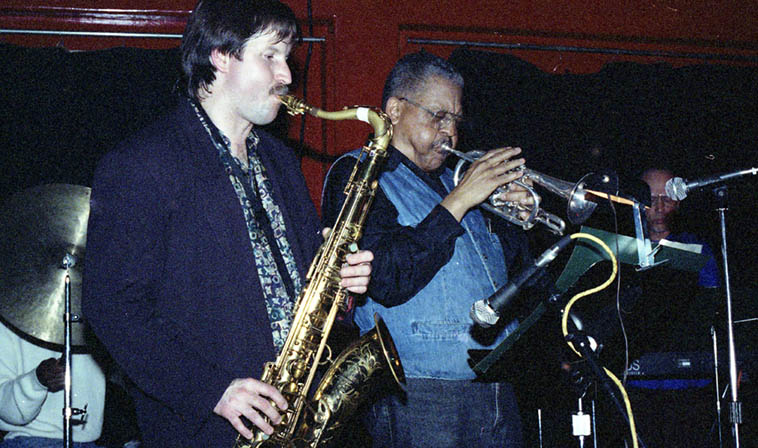 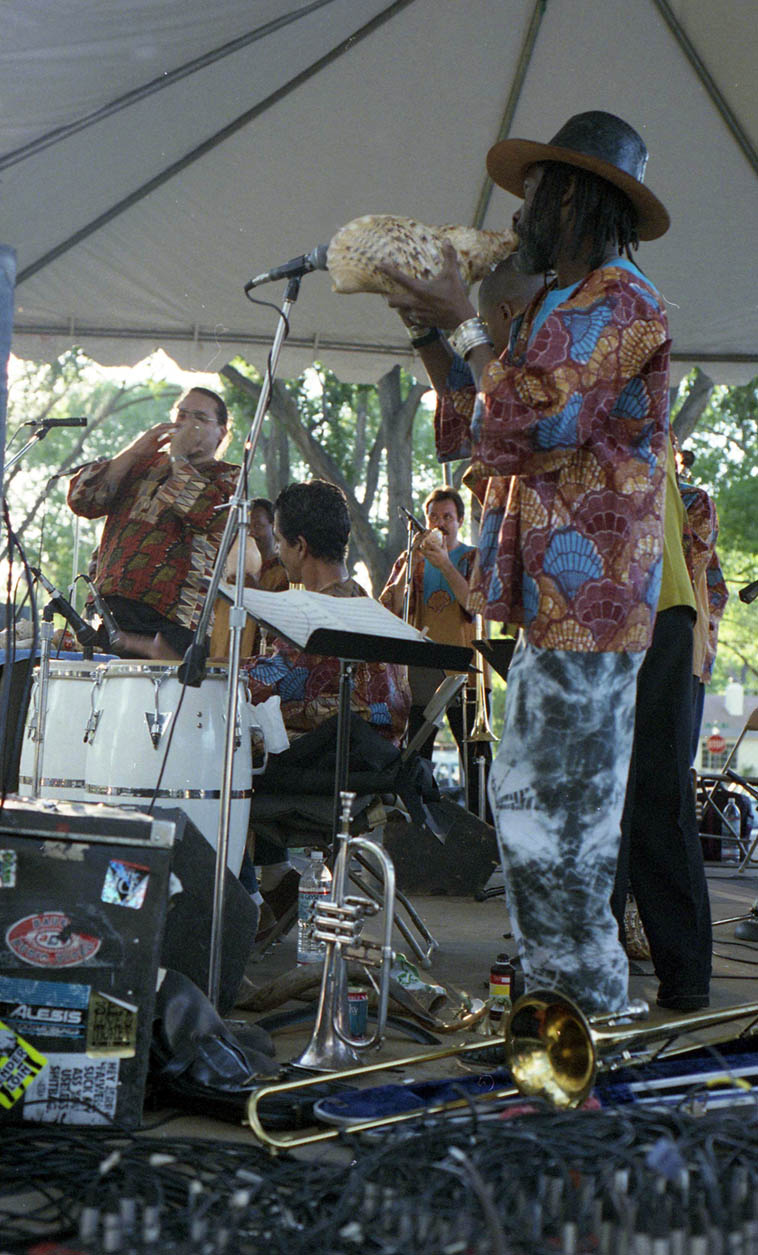 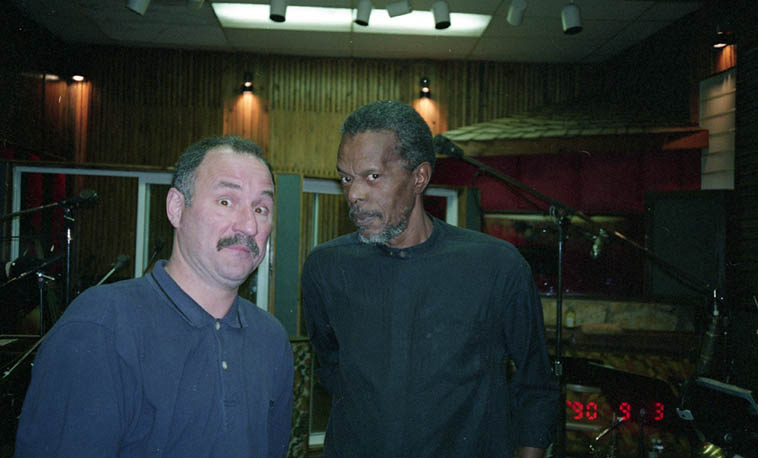 I was in town and scheduled to be at this Horace Tapscott Octet session but my wife had an accident and that took precedence —- SO, the tuba chair on this date, William Roper, took this shot of producer David Keller and HT —- December 21 or 22, 1995 Los Angeles —— Memory Fragment: Horace always tripped me out that he never smoked joints down to the tip end. You’d see perfectly good roaches around his pad in the ashtrays with the cig butts. And I don’t gather he smoked them later because when we were outside and the joint we’d been passing back & forth was down to the nub, he tossed it. I think it was beneath him to use a roach clip. Never saw him with one. Was it a Los Angeles hipster thing? Because, the two times I ever smoked with Dexter he did the same. Tossed the roach into the ashtray. (I saved one of his roaches and had it encased and left it on our coffee table as a conversation piece.) Well, us broke Sixties insurrectionists used roach clips. Or, we rolled up the cover to a matchpak into a tube. Disposable. No evidence except our pleasant moods. We’d keep close when the pigs mispronounced their new big word paraphernalia. Horace’s thing could be a throwback to earlier times when weed was more plentiful. He said, “We got it from the Mexicans, they grew it in their backyards.” I grew my own, too, in a box on the roof in the alcove of an awning hidden by a tree. That was leaf weed, a low-level buzz. Horace never disparaged those joint I gave him, we only smoked those in times of drought, probably reminded him of the backyard weed of his teenage years. By the 70s it was Tom who kept us supplied with state-of-the-art smoke. 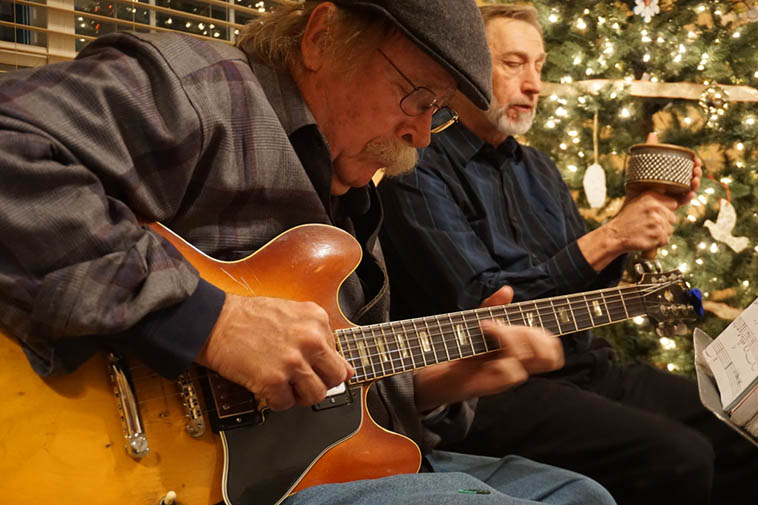 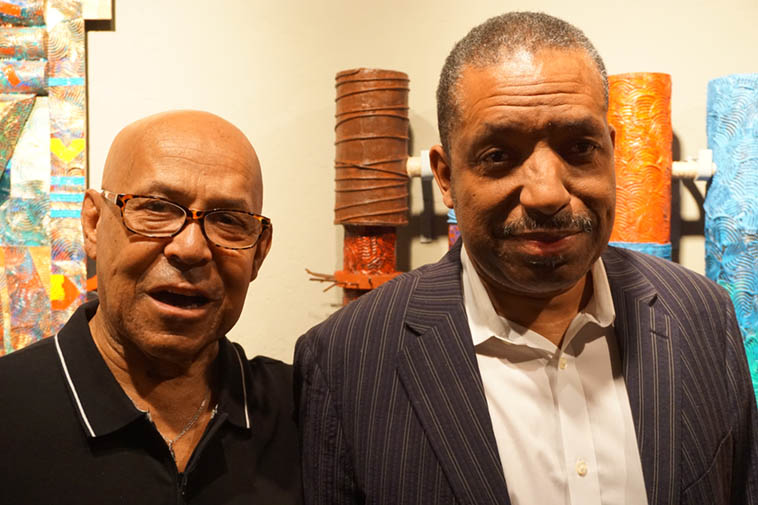 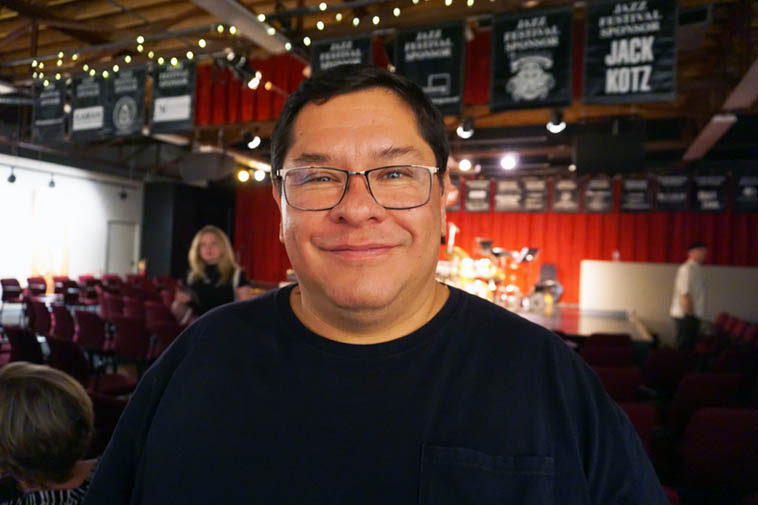 Look at that lip! That’s from 20-million years of playing trumpet with Tower of Power —- Whenever Adolfo Acosta is off the road, he’s home here in Albuquerque —- June 14, 2019 —- photo by Mark Weber —- Adolfo moved here a few years ago to be closer to his trumpet advisor, mentor, and friend, Bobby Shew. 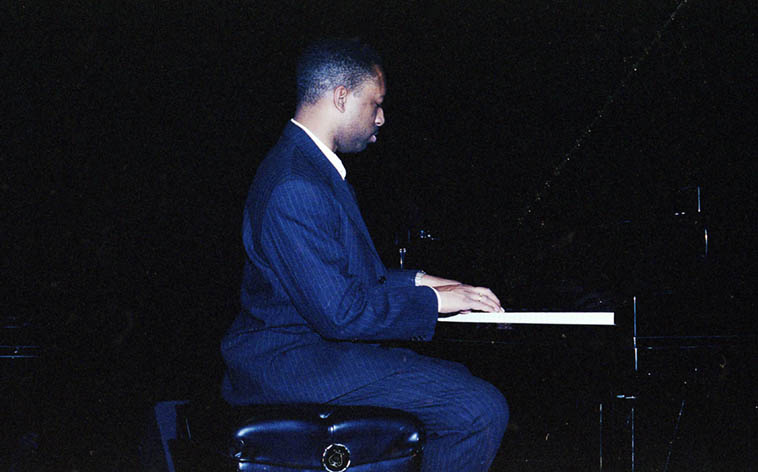 On a magazine-type television show the other night we hear this not-so-young person say, “Oh, that was way back in the 90s,” like it was the Middle Ages. In jazz we have a much broader idea about time. Firstly, this is a living music, when we study a song from the 1930s it is still relevant, and if we’re lucky to find a griot from those years, we learn from them. Alas, I’ve noticed over the years that it is not uncommon after a gig to find saxophonist Donald Harrison studying something at the piano as everybody is packing up —- Here he is on the road with Roy Haynes twenty-three years ago! —- November 16, 1997 —- photo by Mark Weber