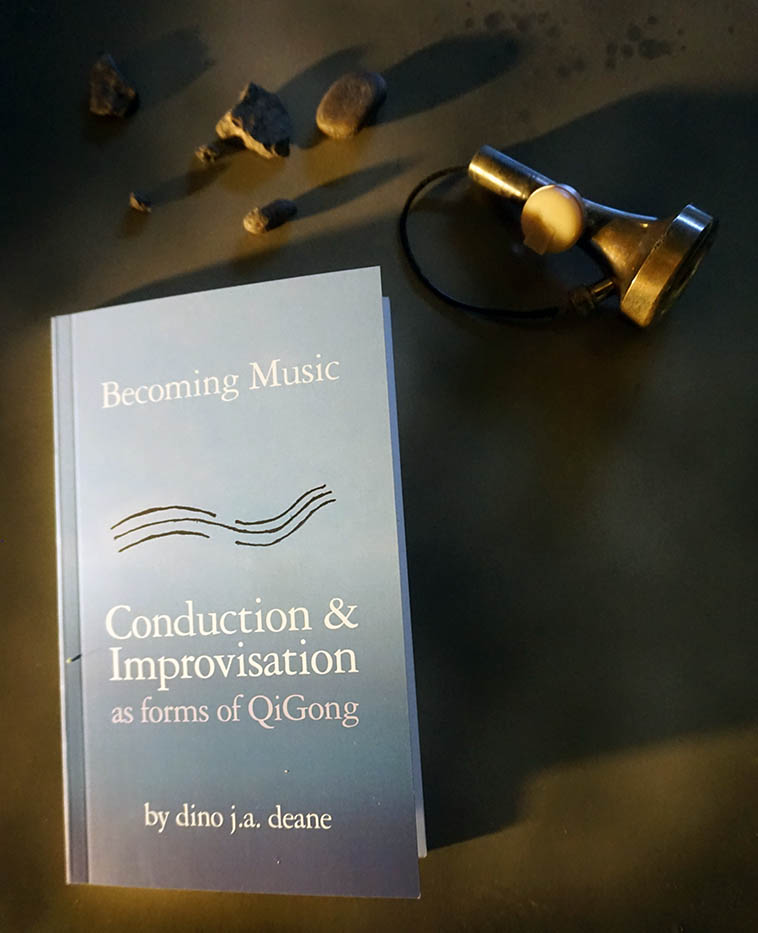 Without taking anything away from Dino, this is the book Butch always meant to write, before cancer subverted that possibility. J.A. Deane is the perfect person for this task, having worked intimately as Butch Morris’ right-hand man 1985-2013.

This book —- BECOMING MUSIC —- is for practitioners. I could see it in conservatory libraries.

All the years I’ve known Dino he has always been deeply involved with sound, to a degree that is superconscious, the wavelengths of life breath. Sound as organism. Sound as coincident vibration with psyche.

I met J.A. Deane in 1996 when he and Colleen moved here to the badlands of New Mexico. Even though, we grew up only 29 miles apart in Los Angeles area we never met. We’re both born in the early 1950s, children of the Sixties, when music almost took over the world. (And made the Beatles the king.)

In this book water is the analogy/analogue for music. Water is elusive, can be many things. Music, too, is further unseen, only felt. I remember working with Dino and realizing he’d let go of the major scale and A440. He just wasn’t locked in on those intonations, anymore, the “western scale,” but it was more than that. He was only focused on sound. It was like he’d gone through the Looking Glass of conventional harmony & theory and popped out the other side.

This is the kind of book you fall into, that when you pause momentarily, you notice almost 2 hours have passed in an instant. It is also a book that, like a poetry collection, should only be read a few pages at a time. It is also a book I would think conservatories would find useful, depending on how open they are to this non-mechanical/non-“thinking” way of making music.

I suppose you have to know who you are before you jump into these ideas.

Now, Dino did, at one time, work within conventional musical boundaries, worked in Los Angeles recording studios, as a trombonist. Notably with Ike & Tina Turner (presumably, that’s another book?) I actually witnessed some of these ideas in action, where Dino let “non-thinking” be the water sound. We had a little madman country group called the Bubbadinos, and in the recording studio I’d see Dino in his enclosure across the room deep into some metaphysical battle with an instrument he barely knew how to play, at least, play by Nashville Cats standards: the lap steel guitar (or, as we country boys call it: steel)(steel being water in a different form). Well, the music he produced was astounding, purely amazing, while I was still wrestling with chords (guitar) and getting my notes where they needed to be, Dino was floating around out there in the universe. (There’s one in every band, right?)(In that band it was only me and the tuba player who were trying to hold down the fort, those other maniacs were gone somewhere else, best not to pay attention to them, lest you get lost —- Is it rolling, Quincy?)

Page 9 is quintessential. I quote just the first 5 lines, of an entire page that’ll knock your socks off:

Some of this stuff I feel like the cowboy artist C.M. Russell when he visited the 1913 Armory Exhibit in NYC of modernist avant-garde paintings, he liked it somewhat, but personally stuck to the old ways. So, that’s why you have a book like this: to show us hardheads new possibilities. I remember when Bobby Bradford was en route to NYC July 1993 to work with Butch who was conductor for David Murray’s Big Band —- (Butch had made a deal with David that he could hire & fire and be Musical Director, “I didn’t just want to stand there and wave a baton,” he told me). Bobby left his car here in Albuquerque and continued via Amtrak, telling us, with just a touch of doubt, that Butch was doing this new thing called conduction, “We’ll see,” he said. When he came back he was exuberant and impressed, said, “It works, there really is something to it!”

I skipped the section on conduction gestures, or rather, I skimmed them, looking for the word that Butch used often in my conversations with him: Ignition. That is such a perfect descriptor as applies to music, on all levels.

“A conduction is cinematic . . . rich with atmosphere, vibe, depth of field, dynamics, and backstory, and when captured as a memory, reappears . . . .” And how! I only caught Butch twice performing conductions (#101 here in Albuquerque and then maybe it was #130-ish at the Bowery Poetry Club one summer evening). But, Dino’s own Out of Context I caught live many many times, and I can attest to the above being absolutely true.

“I have yet to experience any system of music creation that can so gracefully guide a large ensemble through the realm of possibility and immerse them so fully in the moment.”

I love books like this. There is nothing off-the-cuff about it, it was not created on a whim, represents years upon years of thought, all boiled down sensibly, astutely, and distilled into a mere 60 pages, the best. See about it at www.jadeane.com 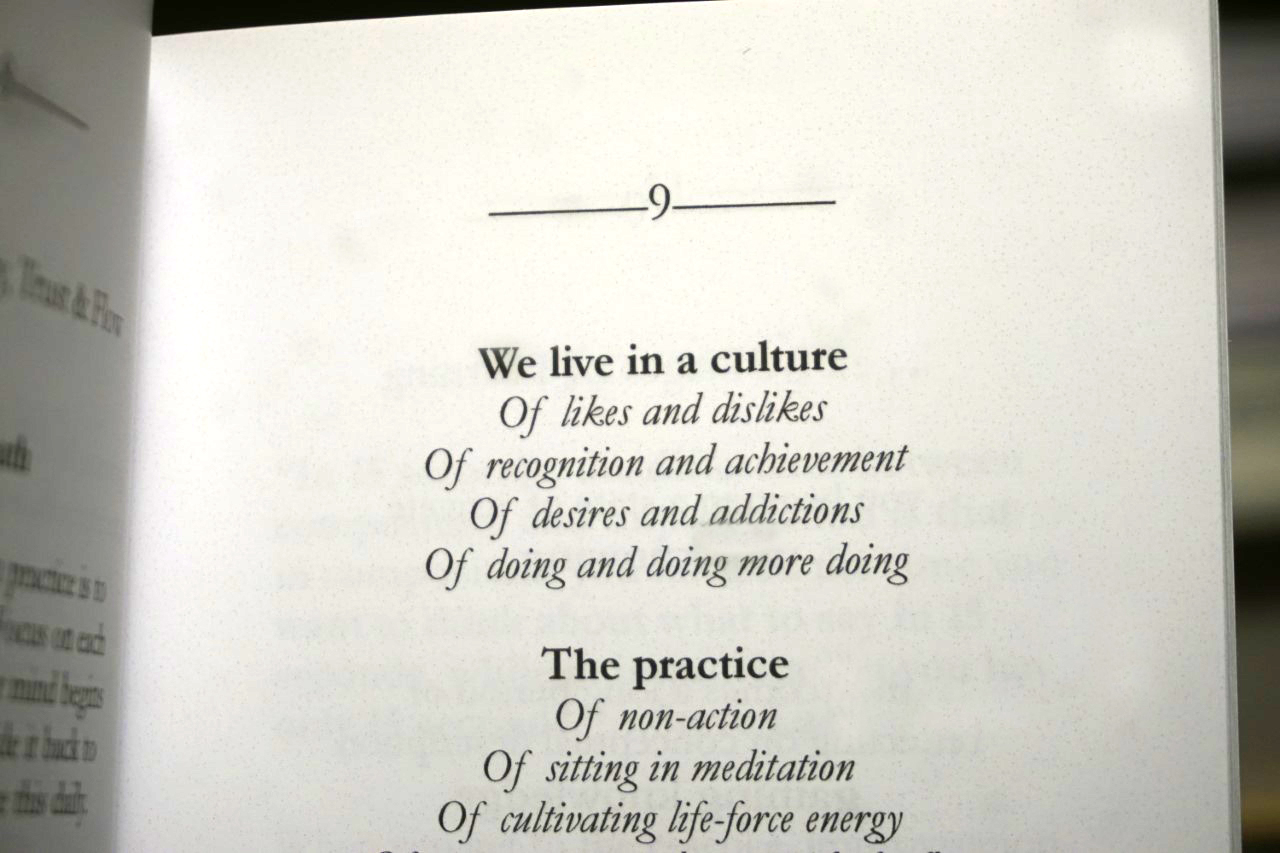 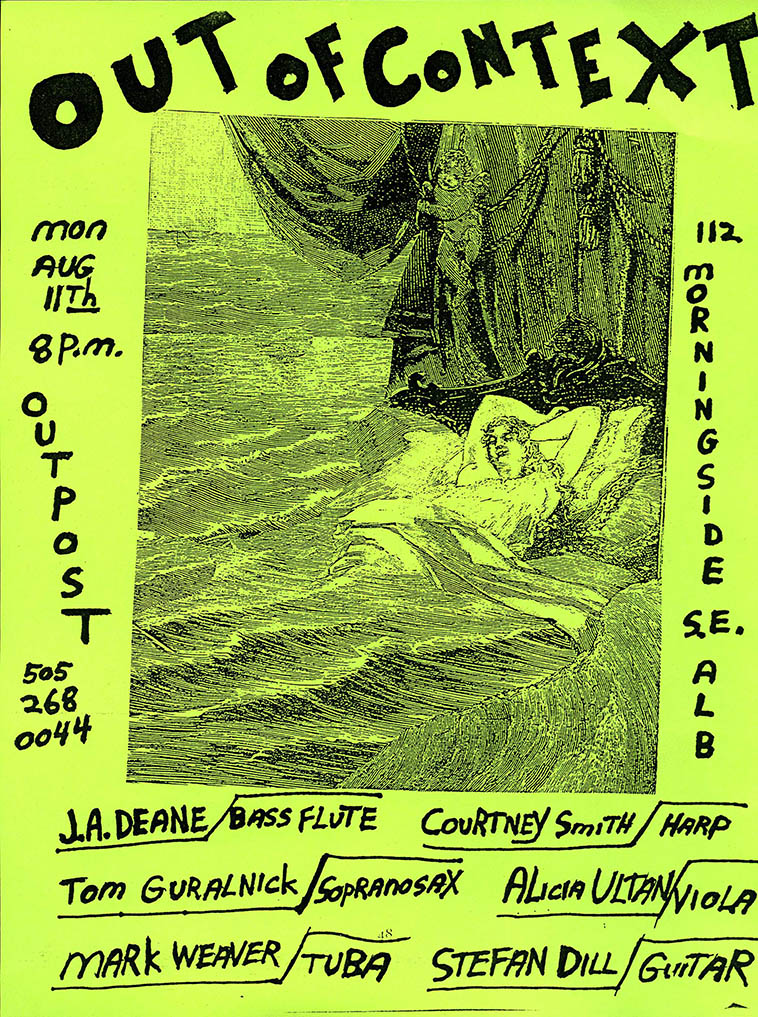 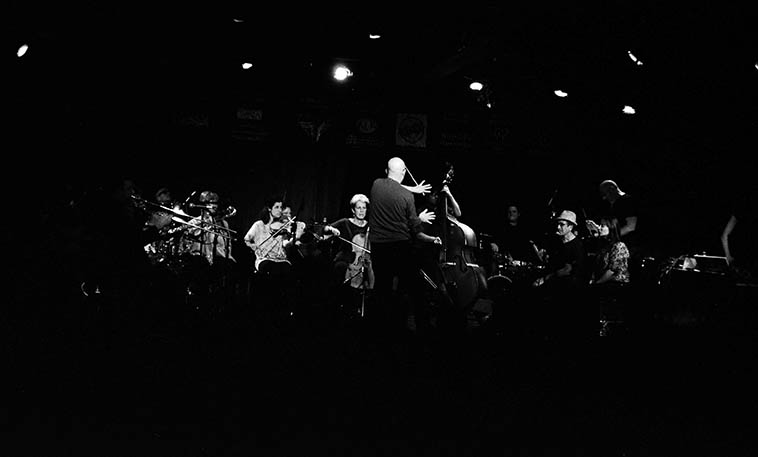 Out of Context with guest Myra Melford (piano) in performance March 30, 2011 at Outpost Performance Space —- photo by MW 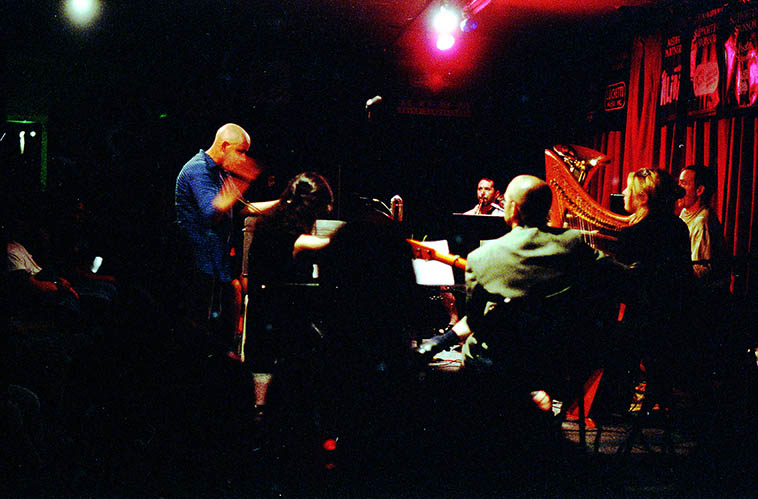 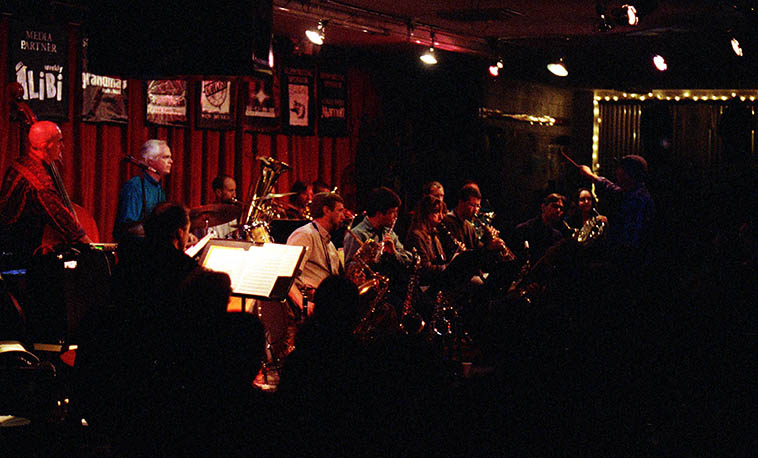 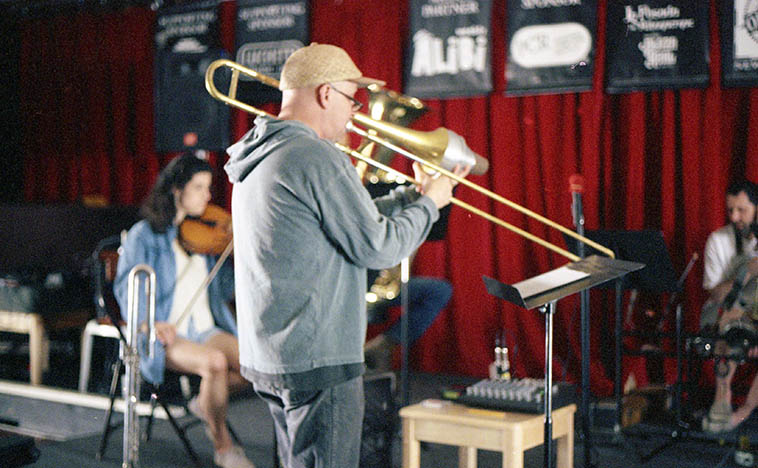 Out of Context rehearsal —- May 11, 1997 —- I don’t remember Dino playing his trombone with this conduction ensemble? —- photo by Mark Weber 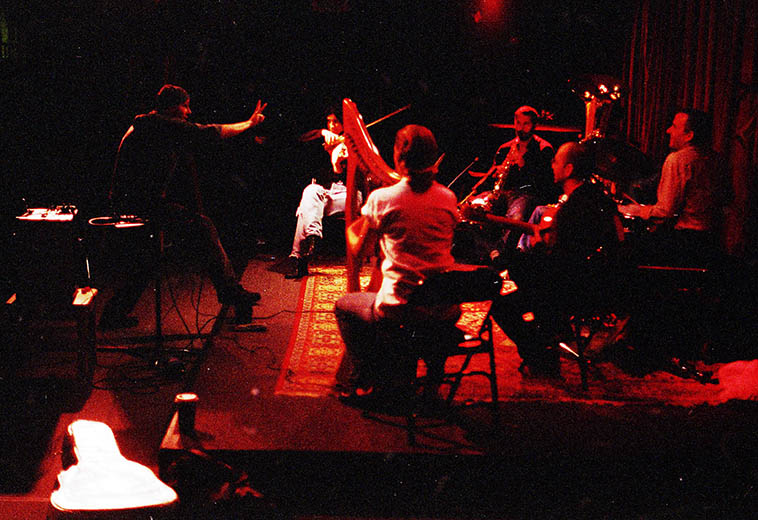 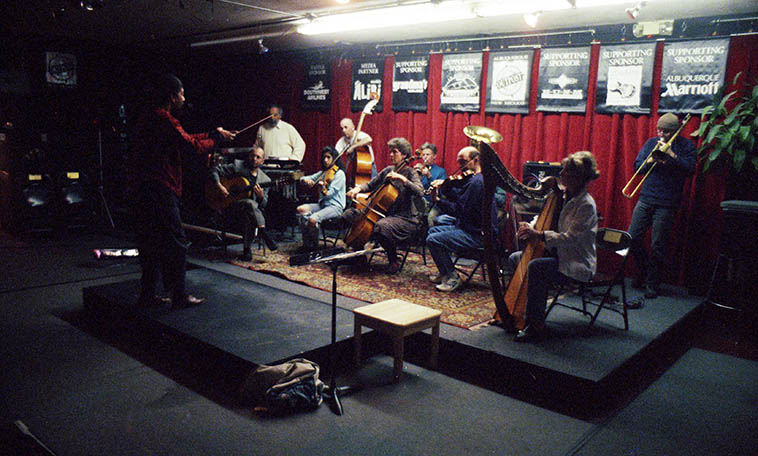 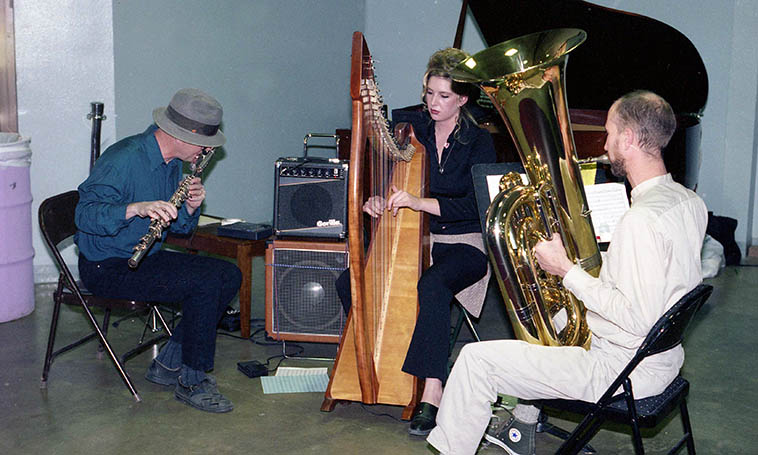 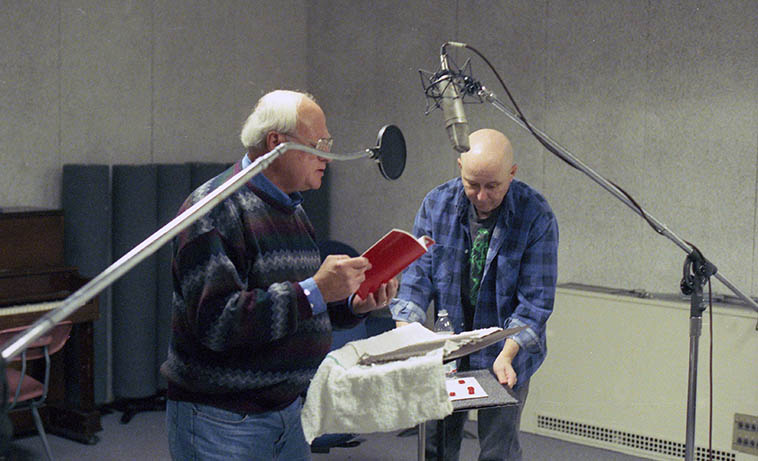 Dino and poet Todd Moore during the session that produced the masterpiece DILLINGER (Zerx Records 039) here at KUNM Studio A —- December 15, 1997 —- photo by MW 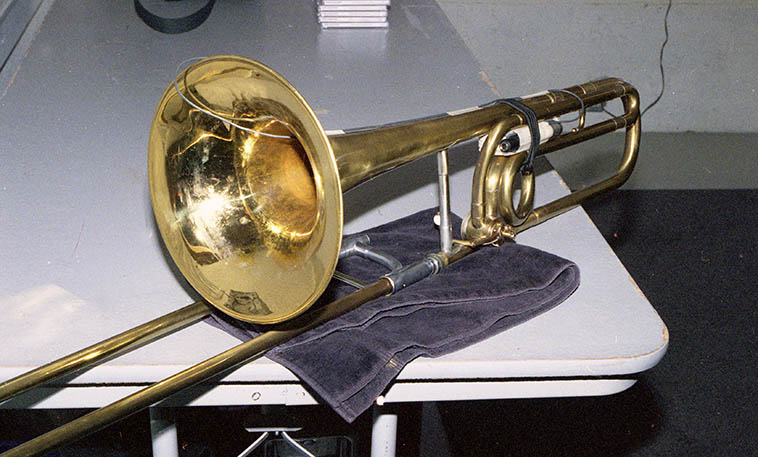 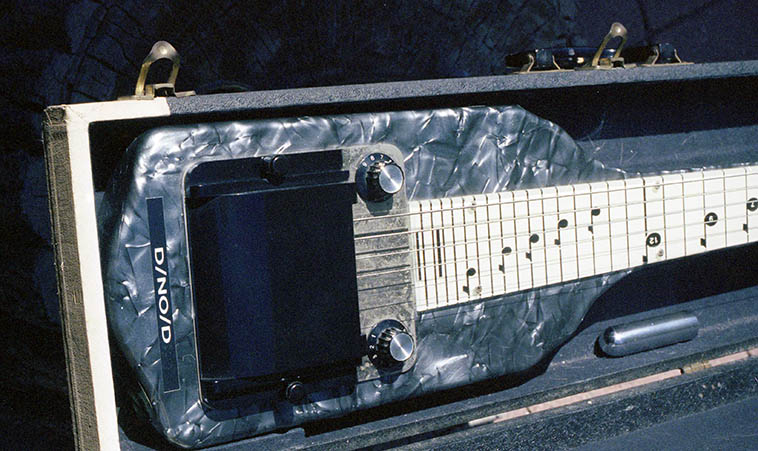 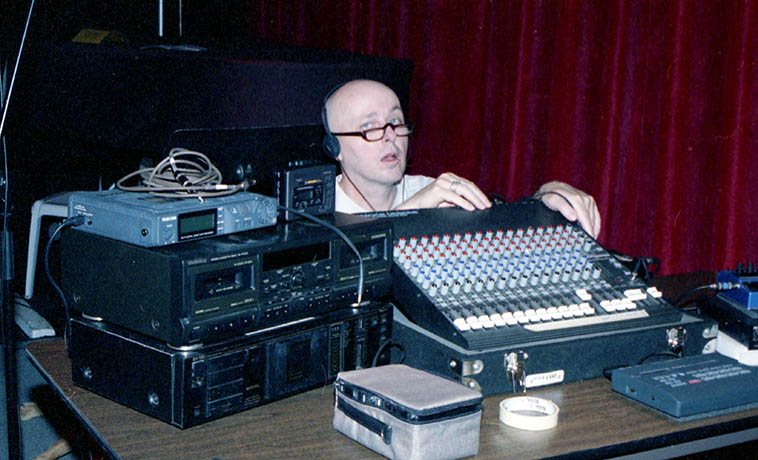 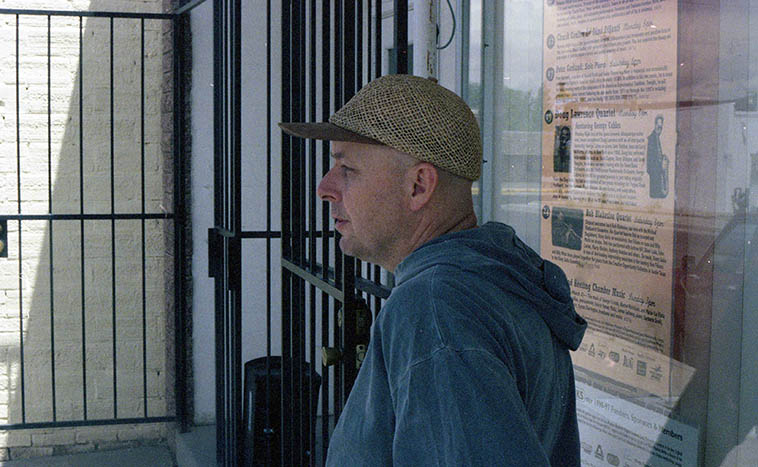 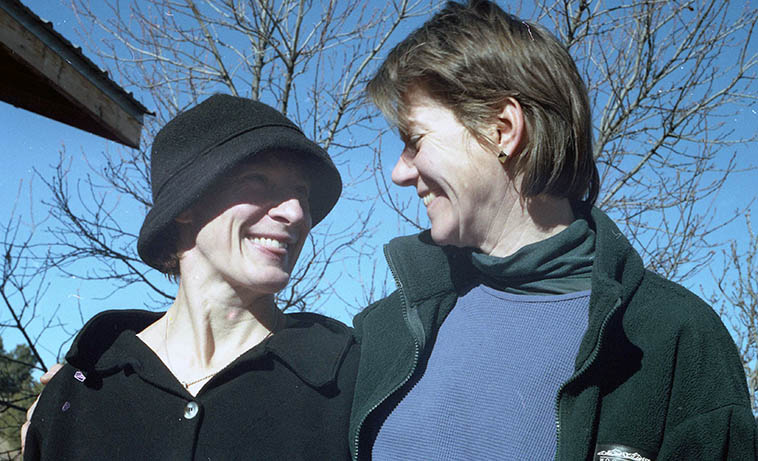 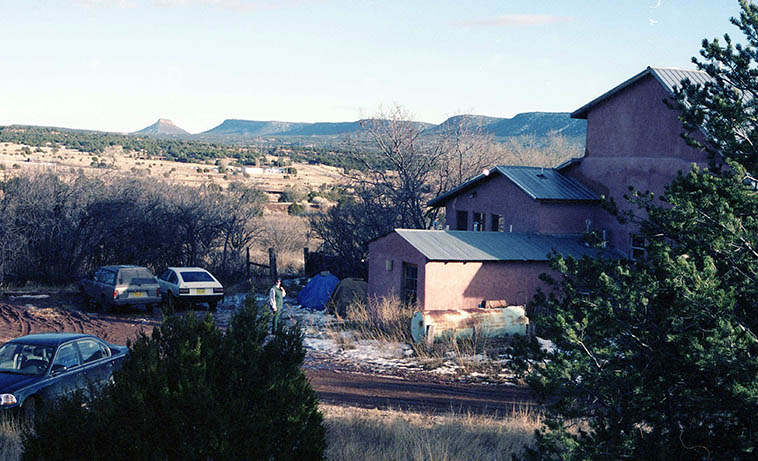 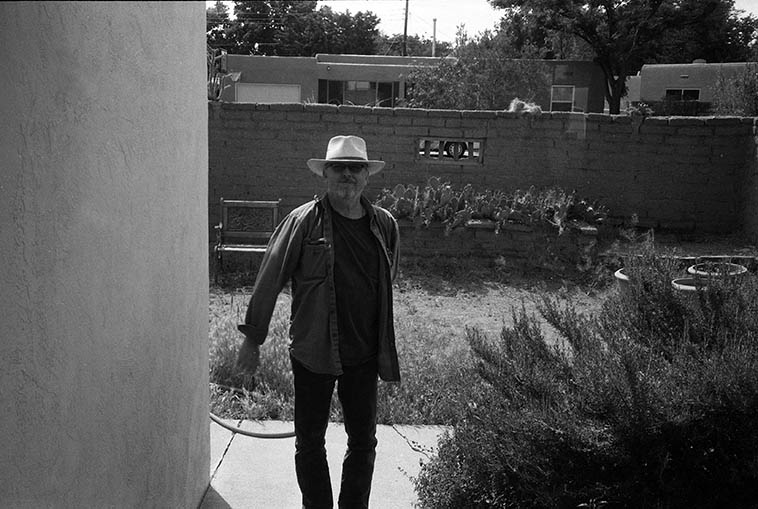 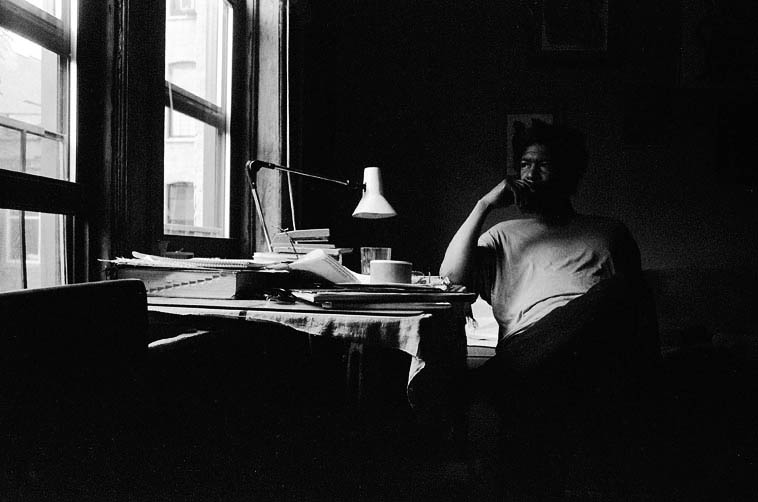 Butch Morris in his apartment NYC —- July 1, 1997 —- photo by Mark Weber — I remember this day Butch saying how he wish he’d met Leonard Bernstein, and that he (Butch) had reconfigured via conduction a couple Beethoven string quartets (sure would be interesting to hear those!)

IT ALL INTER-RELATES —- A talk with Horace Tapscott