Todd Moore was a poet in the shockism style. He says, “For your information gansta poetry in this…

6 Years in the making this blows any other “spoken word” CD out of the water.

With a 44 magnum. ( I usually run for cover whenever someone uses that term “spoken word” – leave that one for the wussies. ) Todd illuminates the abandoned soul of John Dillinger. Dino breaks open the Gates of Hell. Not for the squeamish. When an hour of Dillinger was broadcast over the radio one Sunday afternoon back in 1997, KUNM was inundated by calls from frightened listeners, huge flocks of crows blackened the skies over Albuquerque, and the churches had record attendances for that evening’s observances. — Mark Weber

First, it is a great thing to have Dillinger reborn again being read this time you hear his voice in poem Dillinger and Todd Moore is reading his poem of American hero. His voice (Moore’s) and poem enhances J. A. Deane’s music and the music fits like a knife in the rare cooked steak of Dillinger served up by Moore.” — Michael Basinski, The Hold, March 2002 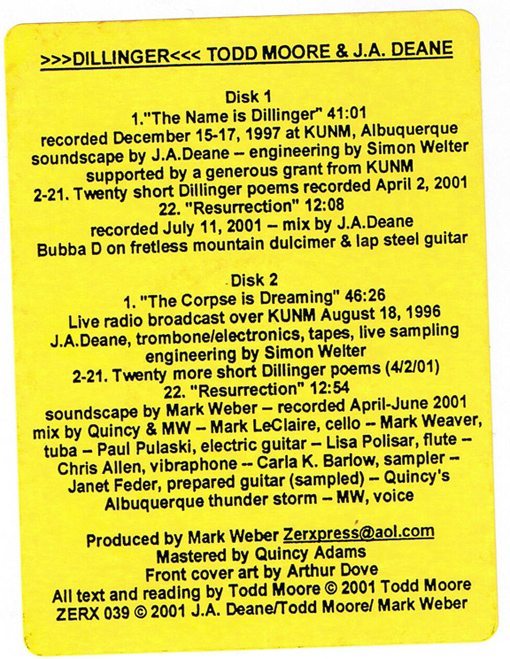 Todd Moore was a poet in the shockism style. He says, “For your information gansta poetry in this country isn’t Bukowski’s invention, it’s mine. I’ve been making this kind of stuff since 1970 give or take. And, it has nothing to do with Bukowski’s style or subject matter. Bukowski was the pornagrapher of pussy and a damned good one at that. I’m the pornographer of violence.” 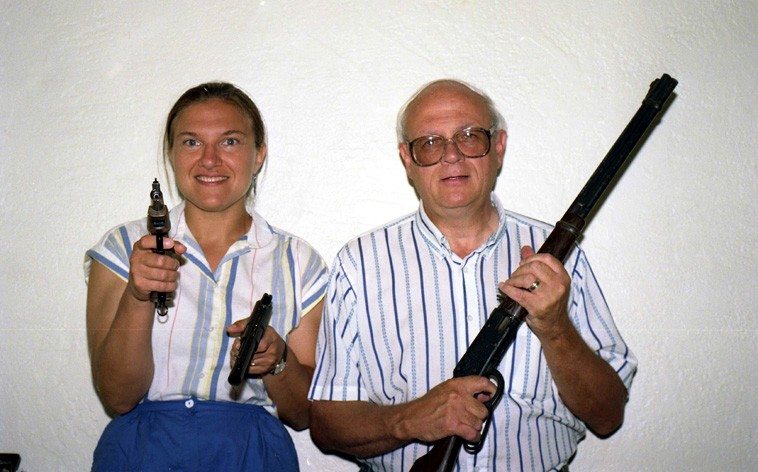 Dr Janet Simon & Todd Moore playing with guns — I was conducting a photo shoot with Todd of him mugging with guns for a book Todd published with Zerx Press, and while we had the cameras set up I had Janet jump in — purely for fun — we spent a lot of time over the years with Todd & Barbara, they became good friends. Todd & Barbara stood as witnesses (that’s what it says on the license) when Janet & I were married by a county judge on a snowy day in 1996. — July 20, 1992 — Albuquerque — photo by Mark Weber

Much more on Todd Moore can be found by clicking here…