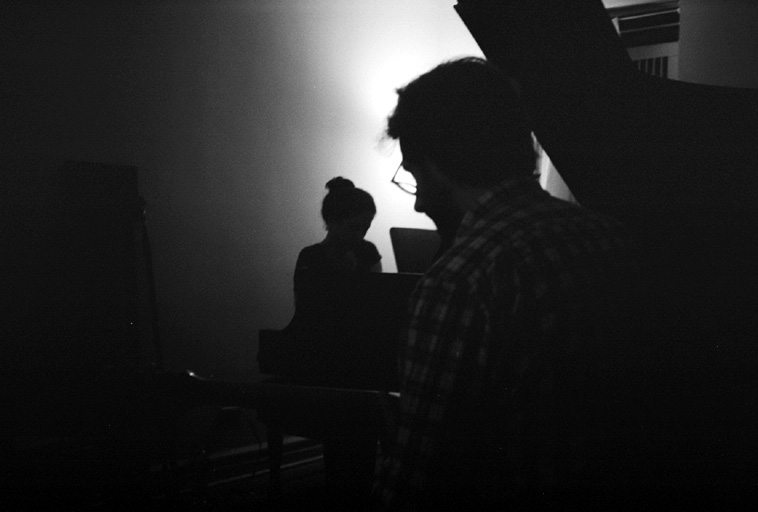 …..both from NYC traveling through on U.S. tour joined by local hotshot COLIN DEUBLE on upright bass for the broadcast.

Whereas the world is made up of people who operate themselves via a conglomeration of second-hand responses and action/reaction mirror reflections of the General Rule, all looked over and supervised by the Central Scrutinizer, making sure we have been boiled down to the lowest common denominator, Adam Caine has so far escaped that fate and is wheeling his way toward New Mexico over the asphalt back corridors. A thoroughly inventive and intuitive musician who was introduced to me by Connie Crothers, with whom he studies aesthetics and philosophy. (She’s a music teacher in Brooklyn and my favorite pianist)(along with 4 other “favorite pianists”). 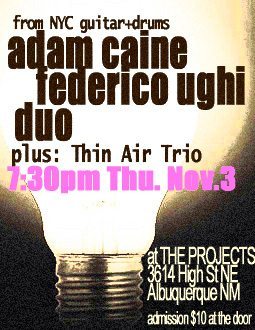 Brother Caine and I collaborated on a CD a few years ago called Two Afternoons, Two Days, Two Something….. Two Different Rain Storms? . . . I forgot what we called it, but it was good. I’ve not heard Federico before but his credentials are impressive and there’s nothing like a drumset that’s been around the world three times. Colin is all over town and a regular on my radio show and when Brother Caine asked about me finding a bass player, “what about that guy that played with Nick (Lyons, alto) on your show a couple years ago?” We all knew that the pulse and harmonic knowledge of Mr Deuble was the knowing ingredient. This broadcast is preview of their concert this evening (Nov. 3) at The Projects, 3614 High Street NE, Albuquerque (short hop north of Candelaria) on a double-bill with Thin Air Trio 7:30 a great venue and great vibe.

Much more on Federico Ughi can be found on his web page by clicking here… and via his record label 577 Records. Visit Adam Caine here…