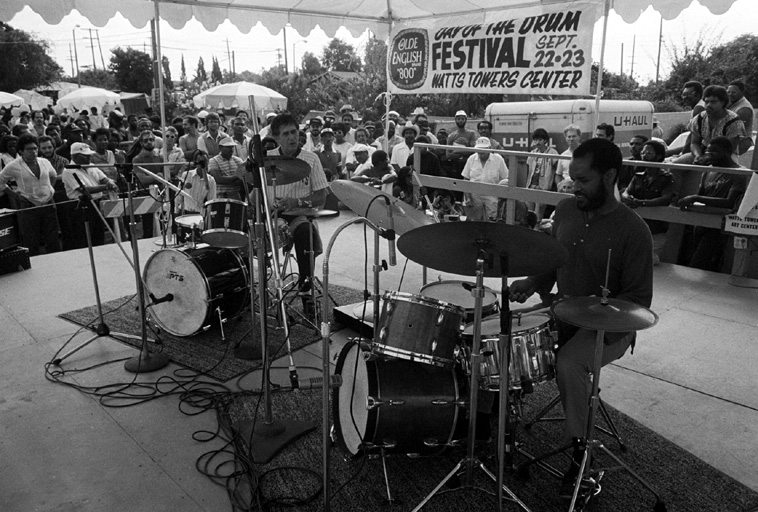 “Memory is something we all wonder about — as time goes by, what one remembers or wants to remember may be different from what really happened.” –Toshiko Akiyoshi

She is speaking about her composition “Memory” and goes on to say how she tried to “capture that feeling of distance from reality, to crystalize that abstraction in a certain way…..” 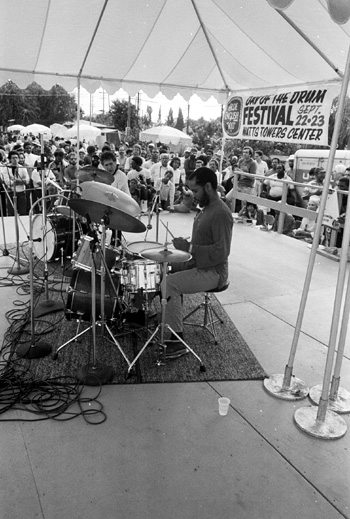 Memory is a faulty mechanism. Whenever I think of the 1984 Day of the Drum Festival at Watts Towers I swear that I remember three trap drummers on stage playing together — Billy Higgins – Philly Joe Jones – Shelly Manne. I have even told people that I saw these 3 play together that day. But, photos don’t lie. And none of my negatives from that event show anything but Shelly & Billy playing duets. And the program says only Shelly & Billy played together that day and that Philly Joe played duets with Tootie Heath earlier in the day but I don’t remember that at all. The program guide also says that Max Roach gave a workshop and I know that didn’t happen. I did photo Philly Joe just standing around with Joe Farrell, so he was there. And Papa Jo Jones was there, I have photos of him being wheeled around in his wheelchair by Billy Higgins. I’ll have to find those shots so Klaus can put them up at Metropolis. MEANWHILE, check these photos out! I sure wish they would have recorded this event. It was smokin. Drum duets are the most. If I was a concert producer I’d have drum duets on the bill every week. And Shelly & Billy they knocked a hole in the clouds. Alas, this was a Sunday afternoon and Shelly died the following Wednesday. The news was all over the radio. Nobody could believe it. In the tremendous book SHELLY MANNE — SOUNDS OF THE DIFFERENT DRUMMER bio-discography by Jack Brand & Bill Korst they quote Shelly’s wife Flip saying that Shelly joked before the duet, “He’s going to waste me,” and then she goes on to say how Shelly played like a kid possessed. 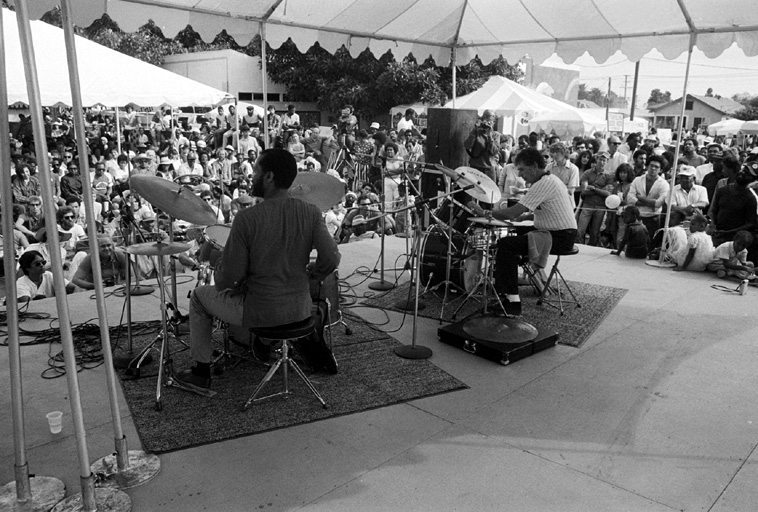 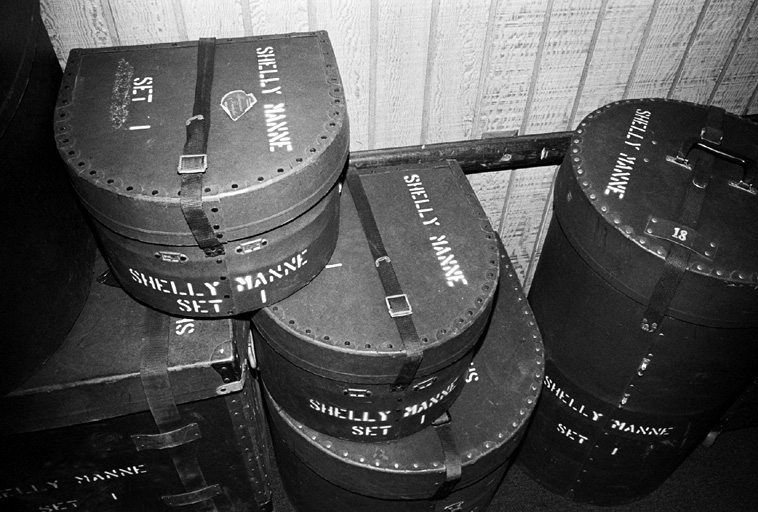 Shelly Manne drum cases stacked in hallway at United-Western Studios, Sunset Blvd, Los Angeles, April 29, 1980 (he had a session the next day with Benny Carter) (I was there for the Billy Harris – Horace Tapscott recording session that became the cd I WANT SOME WATER (Nimbus West Records) | Photo: Mark Weber 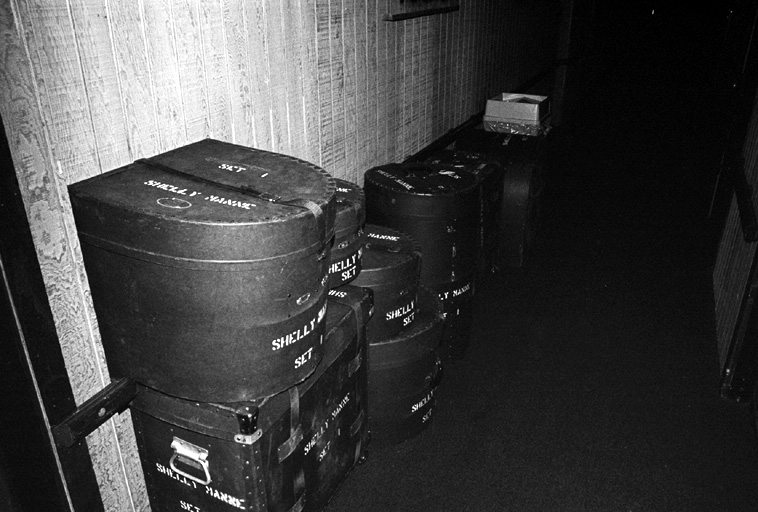 Let me explain something about why Shelly’s drum cases are in the hallway there at United-Western. In the Hollywood studio business there are cartage companies that specialize in delivering gear to the studios. Mostly keyboard players, guitarists, and drummers use them. The guitarist Michael Anthony, who now lives in Albuquerque, who worked the studios 1965-1980 (he’s the ukulele on “Raindrops Keep Falling on My Head”) says he had a roll-around case as big as a closet, full of guitars and pedals and his git-banjo, his git-sitar, &c. He quite regularly had three sessions a day and he’d call the cartage company and tell them which studios to deliver his closet of guitars, and the same for Shelly. He probably had 2 or 3 drumkits at the cartage company, as well as various percussion. Hence, his Set # 1 was there at the studio the night before the recording session with Benny Carter. United-Western has gone through some changes, nowadays. It was Cello Studios during the late 90s (?) and just recently Western was tore down (they were two identical buildings standing next to each other on Sunset Boulevard) and some big new studio erected in its place. 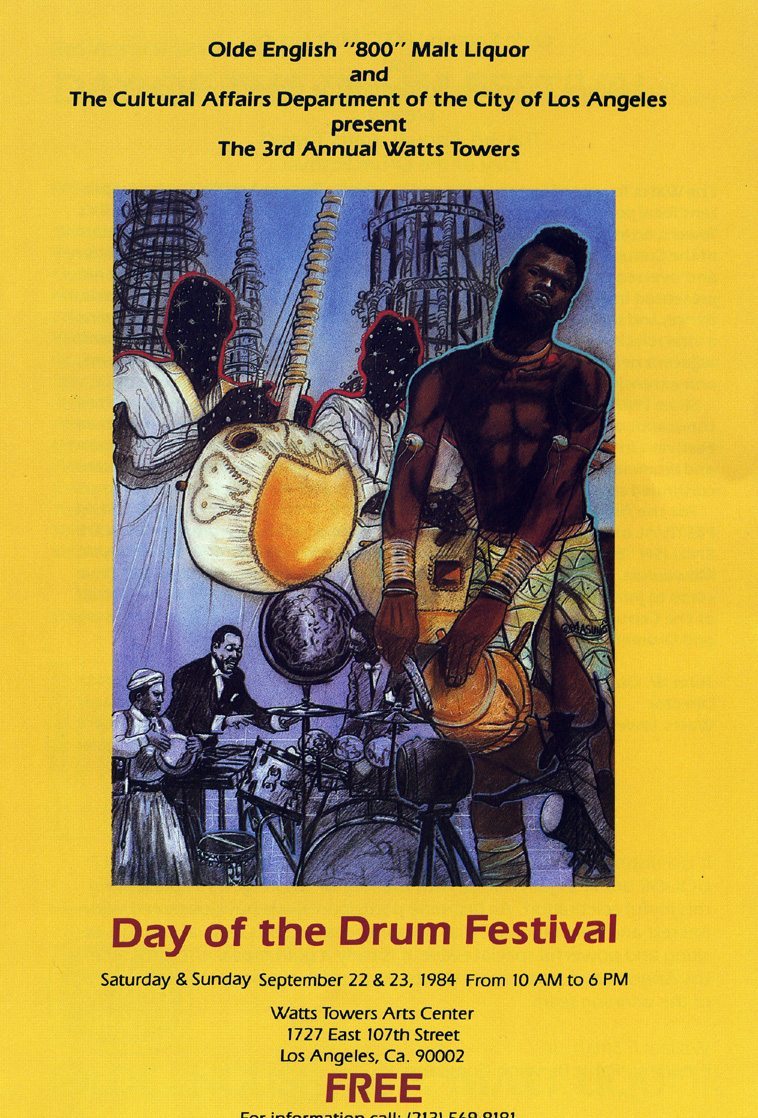 Sometimes One Note Is All It Takes | Cedar Walton Trio & Bobby Hutcherson | Concert In Albuquerque, October 22, 1994