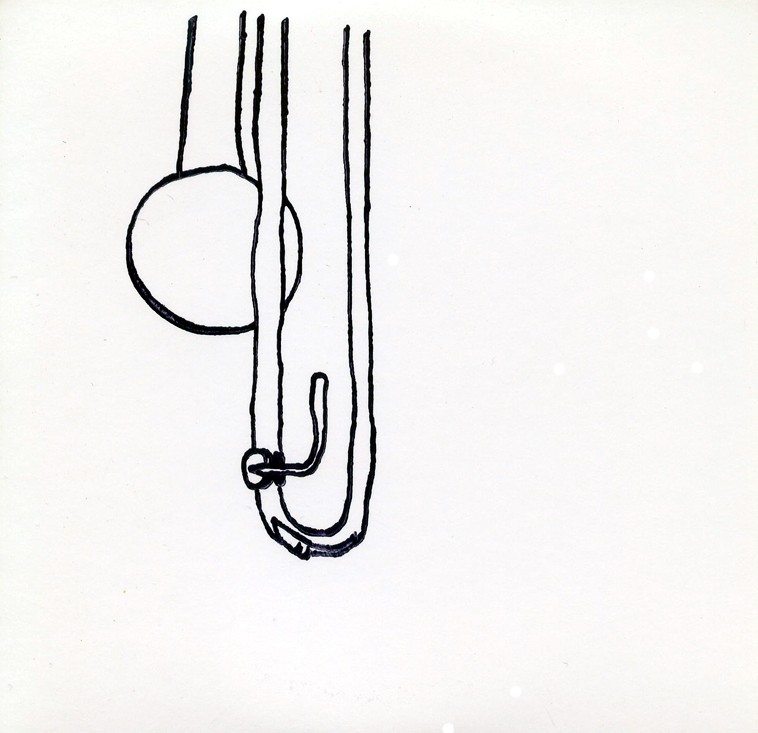 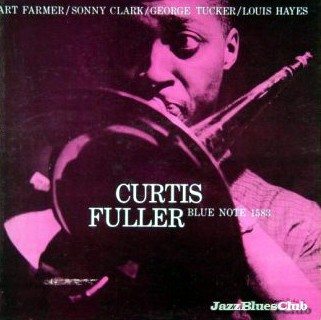 Have you ever noticed that every record that Al Grey is on, even as a sideman, is smokin? It’s always clicking and sparking. Same goes for Curtis Fuller — EVERY record he’s on is happening — I think he must be a spark — the common denominator.

And as every schoolyard bebopper can tell you John Coltrane’s (1957) BLUE TRAIN is the stuff. And the opening line to that album is all Curtis Fuller’s trombone setting things up for Trane to launch us into the 60s. Today on the Thursday jazz show we have the great honor of having CURTIS FULLER as our guest via telephone from his home in Millbury, Massachusetts, (thanks to Michael Cuscuna for helping me with contacts).

After Charlie Parker (b.1920) blew the lid off in 1945 the centrifugal force of his music pulled a generation into the widening orbit of his implications. Technical dexterity on every instrument became super-human, super-charged, fleet. The world had just emerged from one of the worst wars of all time and we were ready to involve ourselves in better things.

J.J. Johnson (b.1924) was the man who proved high-speed quantified bop could fit on a trombone. In his wake we had Frank Rosolino, Kai Winding, Jimmy Cleveland, Urbie Green, Carl Fontana, Melba Liston, Bill Harris, Jimmy Knepper, and Curtis Fuller. (All of them born 1926-1928 except Kai Winding, born 1922, and Curtis, born 1934.)

The Tom Lord Jazz Discography lists 243 record session dates for Curtis Fuller between 1956 and 2011. He started out in Detroit and by April 1957 settled into the maelstrom that was New York City those years. O, to have a time machine. (The telephone will have to suffice for now.) 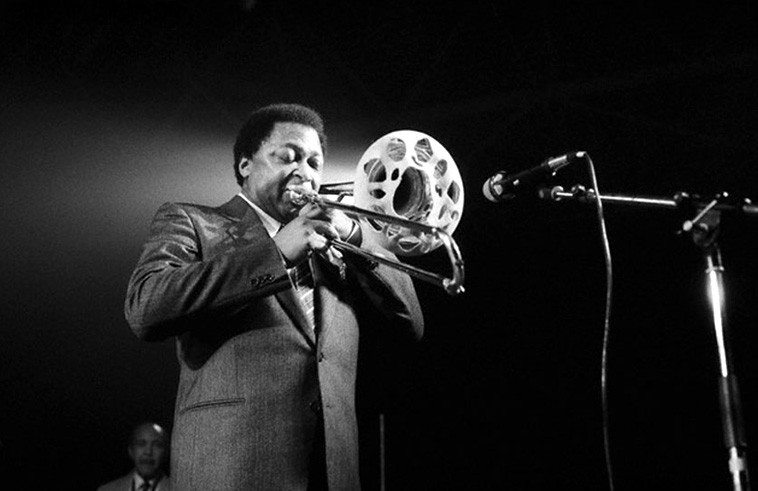 Curtis is the guy who gave the name “Jazztet” to one of the biggest jazz groups of all time: Art Farmer & Benny Golson’s Jazztet of the early 60s (hugely popular those days). He was the trombonist on their first album (1960) MEET THE JAZZTET. We’ll talk about this incredible ensemble. We’ll also ask him about his work with The Master of Time & Space (Lester Young), and Bud Powell, Dizzy Gillespie, Art Blakey Jazz Messengers, Lee Morgan, Clifford Jordan, Freddie Hubbard, James Moody, Yusef Lateef, Philly Joe Jones, Hampton Hawes, Pepper Adams, Kenny Drew, Red Garland, and talk about his new cd DOWN HOME (Capri Records).

And talk about the only time I ever caught Curtis Fuller was summer 1975 with the Basie Orchestra in Oakland, California.

Searching for words to describe Curtis Fuller’s sound, his fluency, mellifluous comfort & ease, I disregarded the term “burly” and come to round, smooth, trigger’d, no dodging and darting, he’s all about coasting on that main line and deep diving into the center. My favorite descriptor comes from Penguin Guide to Jazz: “. . . that wuffly tone” (Cook & Martin).

Mark Weber: Bobby, I’m writing my KUNM radio blurb for my Curtis Fuller interview this Thursday. Can you give me a few lines to quote?

Bobby Shew: Hmmmm, such as?

Bobby Shew: Humility! Yet with confidence!

Mark Weber: And what’s the difference between trumpet embouchure and the trombone embouchure?

Bobby Shew: The cup of the trbone being bigger causes the aperture ( air opening ) to need to be smaller to compensate for energy and velocity loss. It therefore causes the stress factor to increase for the trbone in trying to control the aperture without losing sound quality and range. Its’ forefather was called a SAKBUT! No instrument was better named. The lineage continues!

Mark Weber: And in what circumstances have you played with Curtis?

Bobby Shew: Only in all-star situations and mostly at SKIDMORE College every summer during the workshops.We have known each other for many years but only recently able to really hang and play together at great length. He’s a definite brother to me! 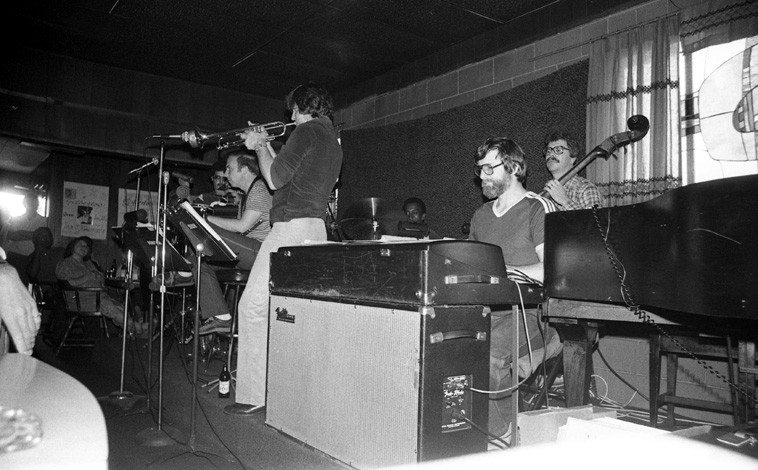 Mark Weber: I called Bobby Bradford to get some perspective (1oct2o12 telcom): I asked that when he first heard J.J. Johnson on records (Bobby’s teenage years in Dallas) if it came across as something entirely new. Was it that much of a departure?

Bobby Bradford: Oh yeh! You immediately knew that it was something different . . . In my mind he was the first one to capture the bop articulation on trombone. Remember J.C. Higginbotham? He was a trombonist who was leaning toward bebop but still had some of that swing thing, and Bennie Green still had some of the older stuff, there were a lot of trombonists at that time that you could still hear the swing thing in their playing but with J.J. there wasn’t a trace, you can’t hear the swing thing anymore in J.J. when he came on the scene, it was clearly different . . . J.J. kind of defined how you were going to play those fast 8th notes on trombone, the articulation necessary for bebop . . . .

Mark Weber: I asked when J.J. first came onto the radar to the general populous via record, and Bobby said that he remembers the Bird records that J.J. was on, “Drifting on a Reed,” “Quasimado,” and “Crazeology,” (December 1947), the latter with J.J. on mute, “I never was a big fan of mute. I always like the sound of the open horn. Oh, I’d use them when I was in bands and the music called for it, it would be written on the chart ‘Cup mute’ or ‘Harmon mute.’ Out of all the mutes I liked the cup best. Just listen to what Fats Navarro does with the cup on “Nostalgia,” probably his greatest solo on record. Even after everything Miles became famous for with the Harmon I never was taken with the Harmon.” 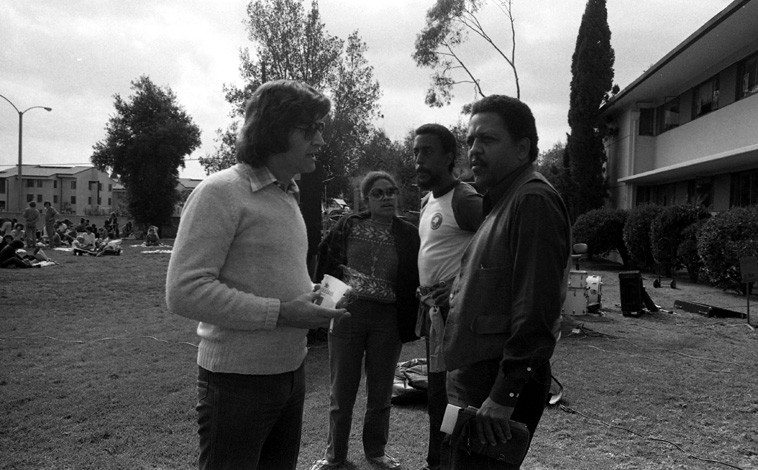 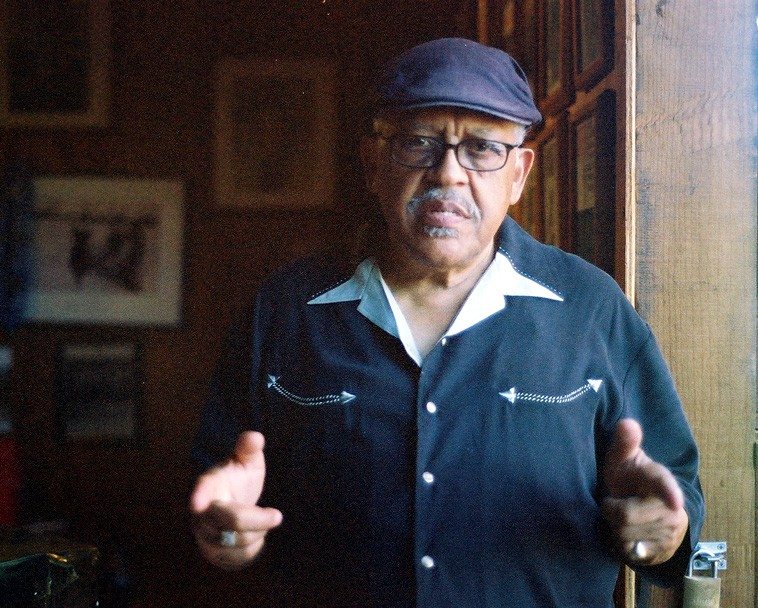 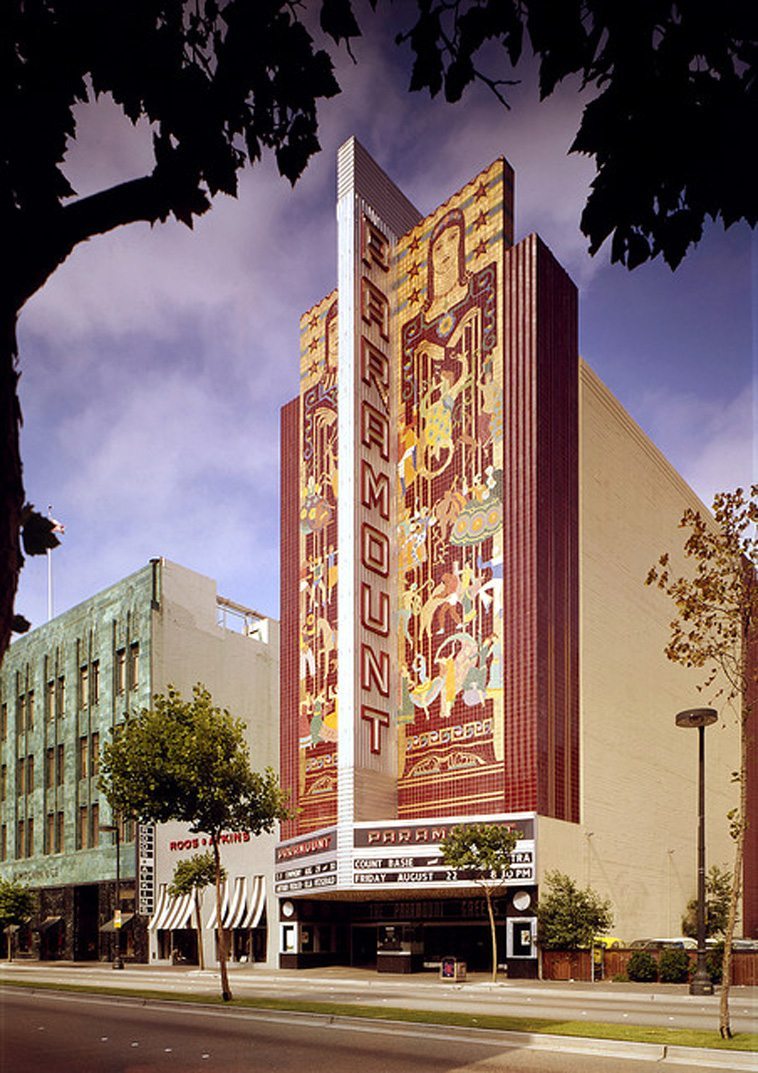