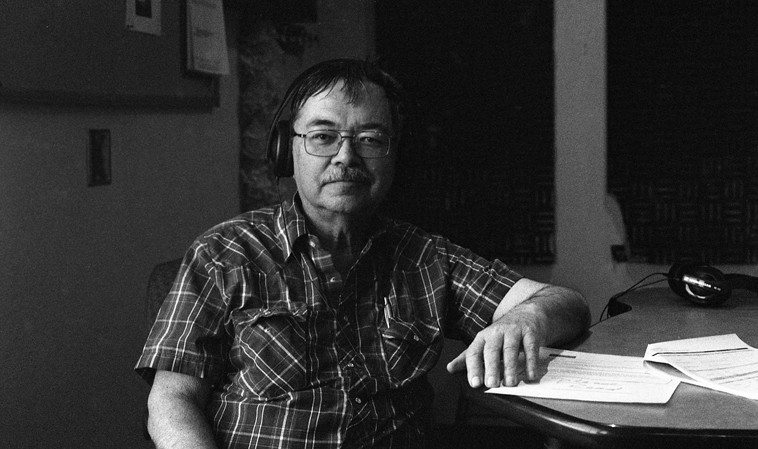 Chief engineer of KUNM Mike Stark who is retiring from active duty this month — March 28, 2013 in the control room listening to jazz — photo by Mark Weber — Mike has been a major ally and tech support on the Thursday jazz show — kept the telephone interface in tip-top shape for my live telephone interviews, and that is no easy task in this day and age when we’re breaking into digital broadcasting and half the telephone systems in America are still analog ! It can be hair-raising trying to figure it all out.

I’ve always been not a little bit mystified by Ravi Shankar’s assertion that Indian classical music is nothing like jazz, “despite the improvisation and exciting rhythms present in both.” Maybe it’s just semantics.

Even in jazz this thing of improvisation is not always brought to bear. In its purest form it is very tricky. If you just fill up the measures with odd bits from your personal bag is that improvisation? My friend the drummer Chris Garcia likes to tell the story that for real improvisation you might consider taking a saxophone away from a saxophonist and handing them a trumpet, “Now you’ll have improvisation.” (Providing this musician isn’t someone like Benny Carter who played both.)

Jazz improvisation is a mixture of wild abandon and the cool flick of a cigarette. The cool composure Prez brought to the fore and the teetering edge of abandon that Pee Wee Russell tampered with . . . .

I’ve always loved Charlie Parker’s practice of composing tunes where he left the bridge uncomposed and the player had to improvise those 8 measures — tunes like “Chasing the Bird” and even on 12-bar blues like “Another Hair Do” where the middle phrase is left open.

Today’s radio show we’ll hear from most of these people in the photographs. 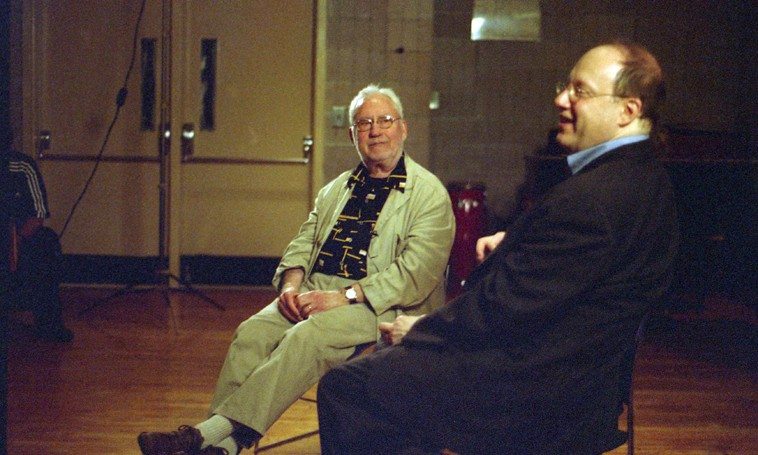 Lee Konitz & Loren Schoenberg — May 8, 2008 NYC — Lee being interviewed by Loren as part of his activities as director of the National Jazz Museum in Harlem — (Loren is a very good interviewer and extremely knowledgeable jazz scholar, his liner notes for such collections as the Complete Charlie Parker Live Performances on Savoy and the box set on Lester Young for Mosaic are spectacular) — photo by Mark Weber 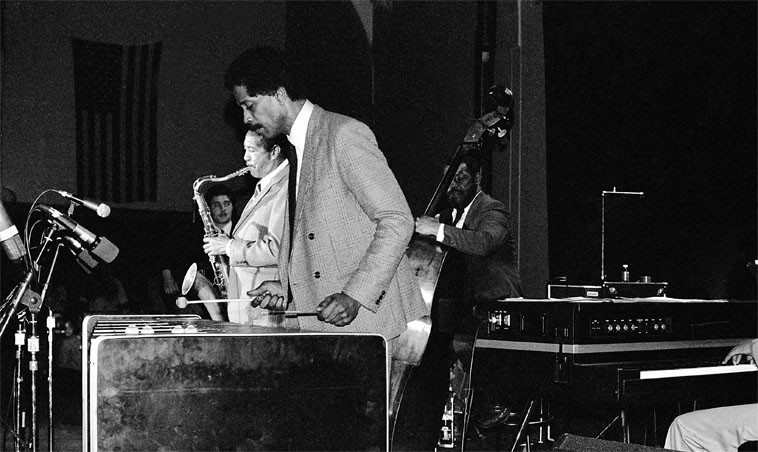 Bobby Hutcherson & Harold Land as part of the Herbie Lewis Reality — March 30, 1983 at Cal Poly, Pomona, California — Herbie, bass; Larry Koonse, guitar; Tootie Heath, drums; Harold, tenor; Bobby, vibraphone; and I didn’t catch the piano player’s name; also, Freddie Hubbard sits in later in the set — photo by Mark Weber — Bobby Hutcherson and Harold Land first show up together on record in the Gerald Wilson Orchestra of December 1967, and in that same month record their first record (under Harold’s name) that begins a musical relationship that lasts till 1974 with nearly 15 albums in small group formations — In 1975 Harold Land formed a group with Blue Mitchell that lasted till cancer got Blue in 1979 — These groups worked extensively all over Southern California — At the time of these photos Bobby Hutcherson and Harold Land had been working with The Timeless All Stars (Timeless was a record company) a group that made several records during the years 1982-1990 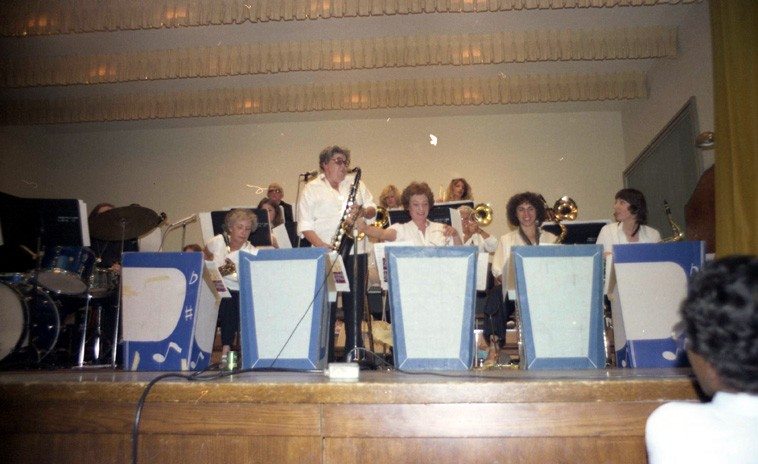 The Bonnie Janofsky-Roz Cron Big Band playing for Blue Mitchell’s Memorial at Local 47 — June 10, 1979 — I’m not sure this iteration ever recorded which is too bad because they could peel the paint off the wall — shortly after this picture was taken they became the Ann Patterson-Bonnie Janofsky Big Band and I do have an aircheck of them playing at the 1980 Woman’s Jazz Festival Kansas City that has Stacy Rowles on trumpet (I’m pretty sure that’s Ann Patterson second from the right in the sax section, sitting next to Roz, who was in the center of saxophone section), Bonnie is on drums; and that’s Kay Blanchard on the black tenor saxophone — not long after this the band changed its name to Maiden Voyage — Roz was a veteran of the International Sweethearts of Rhythm, a 1940s swing band that included Lorraine Geller(!) as well as Clora Bryant, who also joined Maiden Voyage all those years later in Los Angeles — photographs by Mark Weber 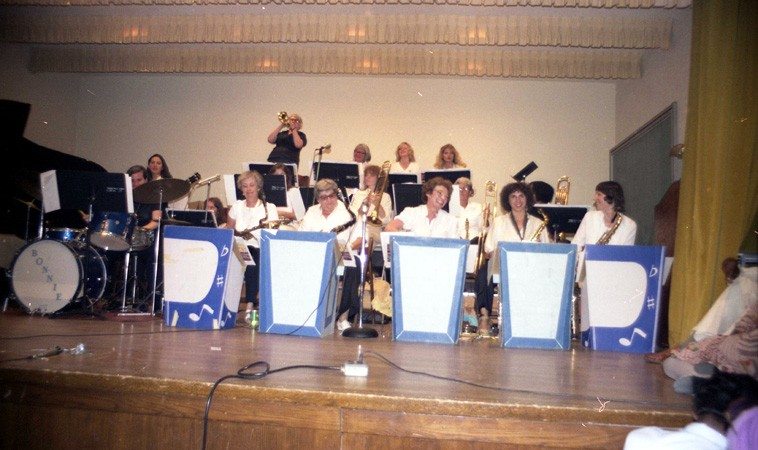 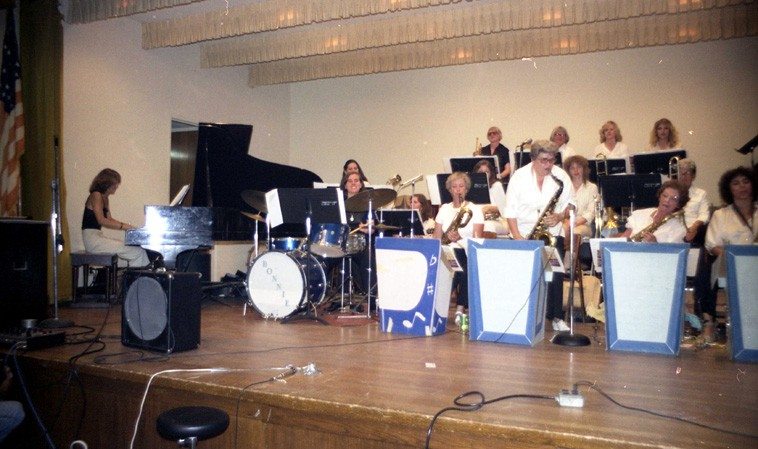 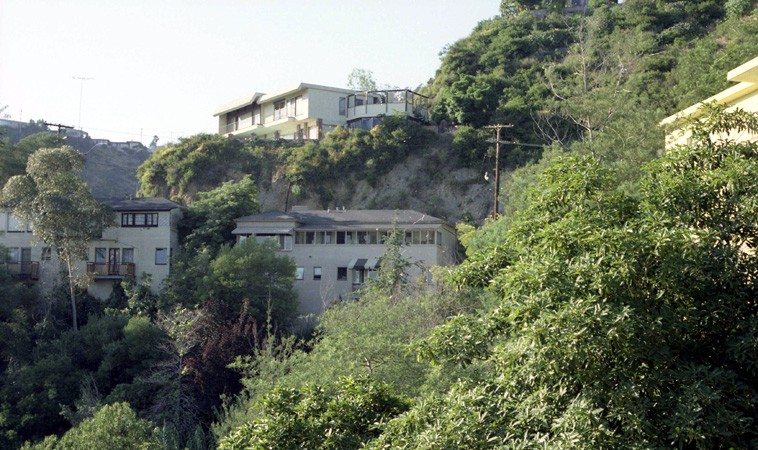 Lenny Bruce’s home in Hollywood, the infamous House on the Hill — ( the one at top ) — June 1978 — photo by Mark Weber — Lenny was and is the jazzman’s comedian, he was so hip and so unexpectedly right he elevated an entire generation 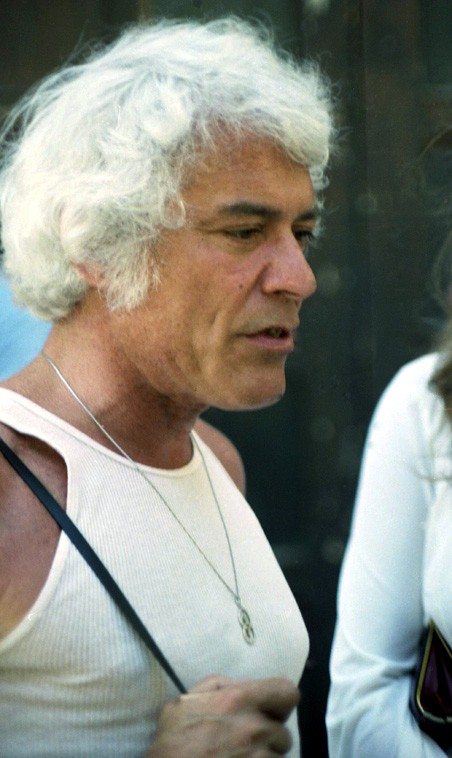 Lou Levy in Hollywood — May 28, 1978 — photo by Mark Weber — Lou was the pianist on countless West Coast bop records and is the reason Stan Getz’s renowned album WEST COAST JAZZ of 1956 is so great