Jazz At Half Moments 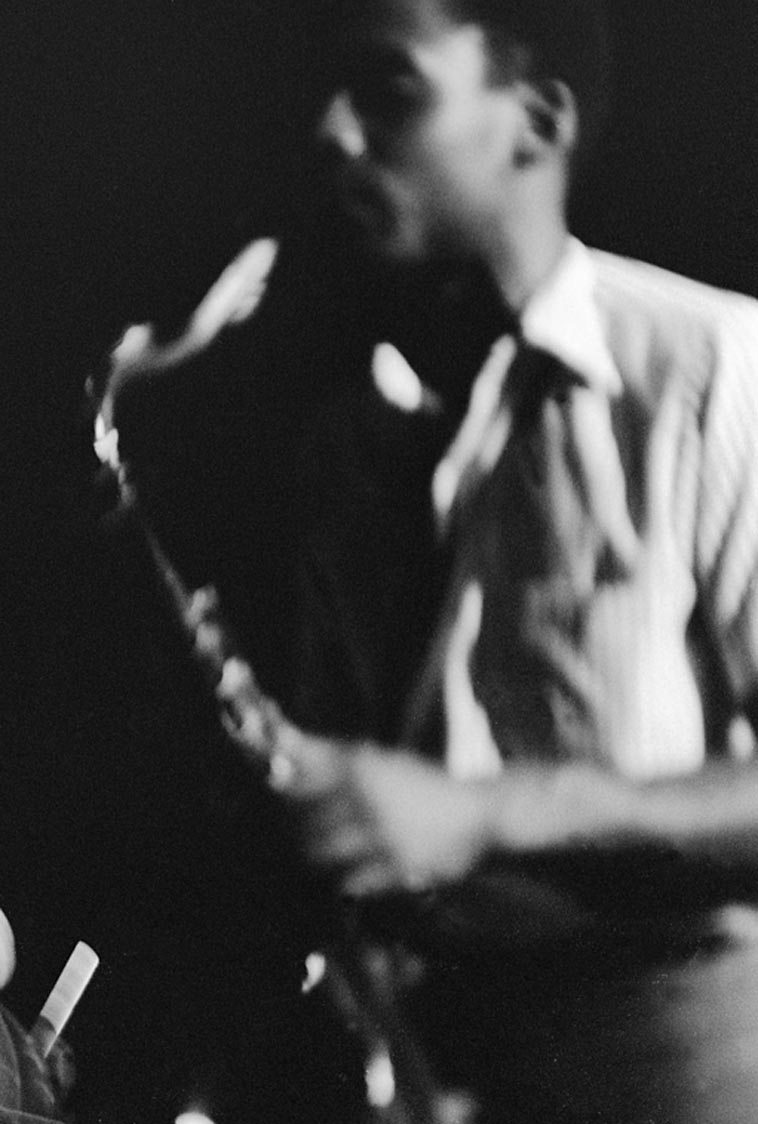 It seems like something that
has always been here, but
it hasn’t, it resides in
the future and we only glimpse
it’s full meaning in fleeting
intervals, a coiled arpeggiated
chord, a horn like the distant
freight train across town, a saxophonist
passing through whose name you
didn’t catch, played the
jazz that relaxed the clock, where
“future” is actually the deep present, sitting
in lotus remembering all
the years in-between, and
all the different realities,
and everything
that has led us to this moment
right here. 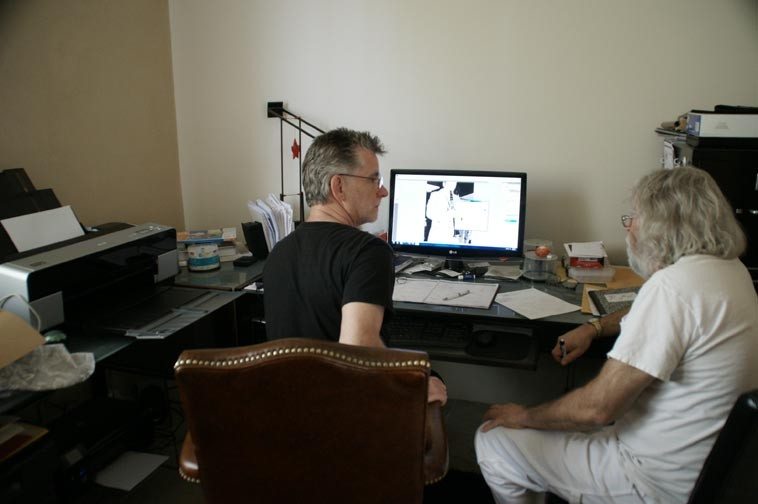 Cal Haines studio in Santa Fe — note the printer off to Cal’s left that we used — you can see Art Pepper with clarinet on the screen — May 27, 2013 — photo by Victoria Rogers 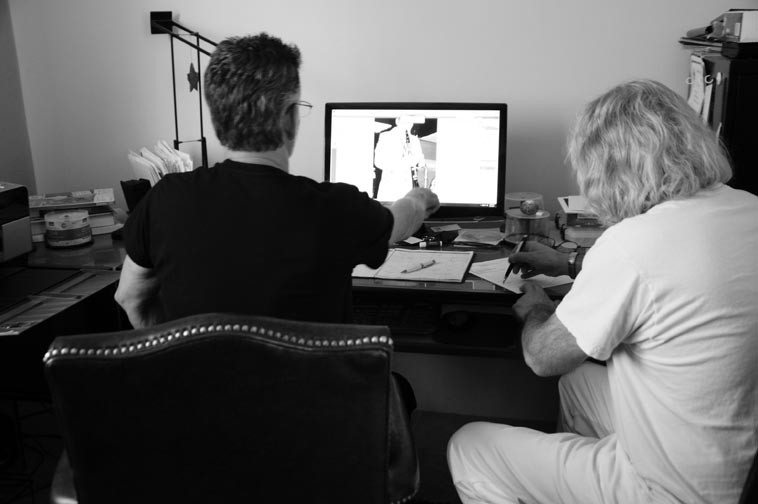 Cal & Mark working on the show — we had several sessions of printing toward eventuality — Note my regulation Zoot Sims white teeshirt — May 27, 2013 — photo by Victoria Rogers 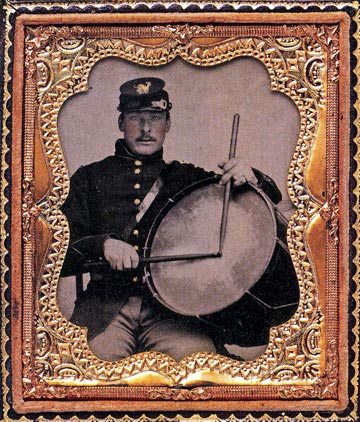 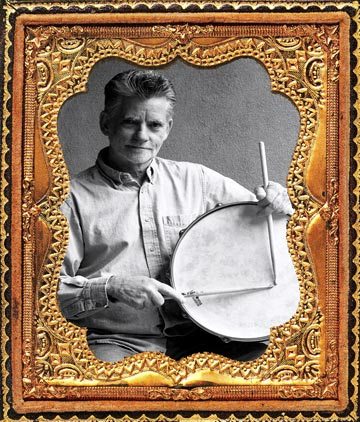 When I’m doing a photo sitting or portraiture I sometimes bring along examples of old photos I would like to approximate — the photo of TG3 in this exhibit is an example of that approach — I love those 1920s jazz band publicity stills — This one of a Civil War drummer was in a recent issue of The New Yorker and I showed it to Cal and so we re-imagined this shot one afternoon in Santa Fe (May 20, 2o13) — Cal added the gilded frame — photo by Mark Weber

I hope you can come to see my pictures at the Outpost. I am curious to know to know what effect that they have.

90% of those in the exhibit have never been seen before. Most of them laid around in boxes for the last thirty years. Some of them are new. Even though all my prints & slides were donated to UCLA in January 2005 I kept the negatives. So, over the last two years Cal Haines and I have been meticulously working our way through the archive and scanning & digitizing & cataloging them — we’re up to 26,000 presently and only about halfway done. It’s been a big job.

The shots displayed here on this page are not in the show, they are counterpart companions to the 81 photographs that we put on the walls.

Over this same period I have been thinking a lot about the idea of mythology. What is it? What were the circumstances that humans developed this form of story?

A myth is a story that everybody knows, even when they can’t remember having ever heard it or read it. — C.S. Lewis paraphrased

I know everybody loves Joseph Campbell and his notions of mythology but I haven’t found him useful to my search, and he’s a little bit too shrill for my taste. His conclusions are hard for me to understand. Likewise, Carl Jung who is renowned for his theories of collective unconscious and racial memory, inherited memory, are terms I find useful but his actual definitions are laughable. He’s also something of a windbag, like Freud, these guys had no acquaintance with the concepts of brevity. Why say something in 30 words when you can say it in 30 pages? So, I can’t claim to have wallowed through enough C.G. Jung to venture too strong of an opinion.

Jazz is nearly old enough to start entering into the halls of mythology. Myths contain fragments of the larger, objective truths — higher purpose — sanctified & sanctifying all parts of life — motivations for the greater good — grace & forgiveness (to absolve ourselves) — redemption, consolation, restoration of meaning — nor is there a division between the supernatural and the natural — A myth is true real created world — as well, jazz is heroic.

And so, I am still thinking about it. I want to read what Claude Levi-Strauss has to say about mythology.

In photography everything is collapsed into two dimensions. Then, mysteriously, the images put you into a narrative mood which has it’s own dimension. All of a sudden you’re a stranger in paradise. 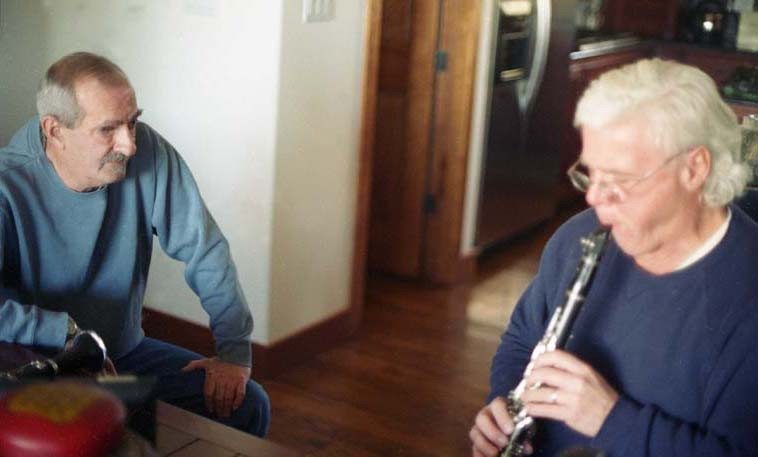 Kenny Davern & Bill Payne afternoon clarinet session at Kenny & Elsa’s place in Sandia Park, New Mexico — December 16, 2005 — my band The Mark Weber Poetry Band had just performed the night before at the Outpost (MWPB: Bill Payne, William Roper, Michael Vlatkovich, and me) and Kenny & Elsa were there and Kenny was knocked out by Bill, a total absolute deep-grain clarinet player, and so the next day was set aside for them to get together and trade ideas — one of the clarinets on the table is Pee Wee Russell’s — photo by Mark Weber 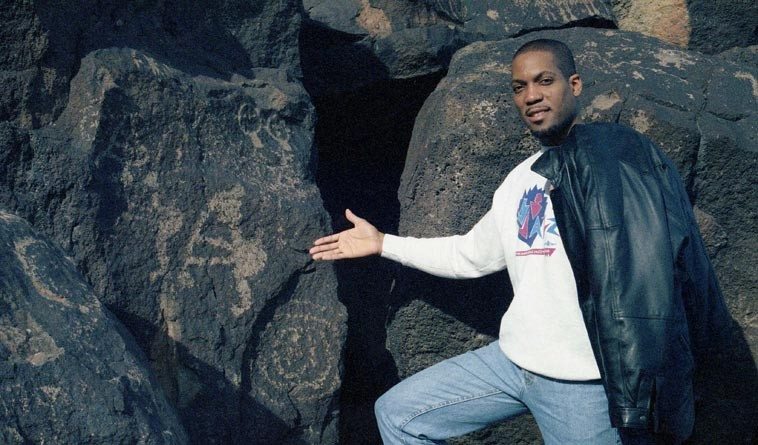 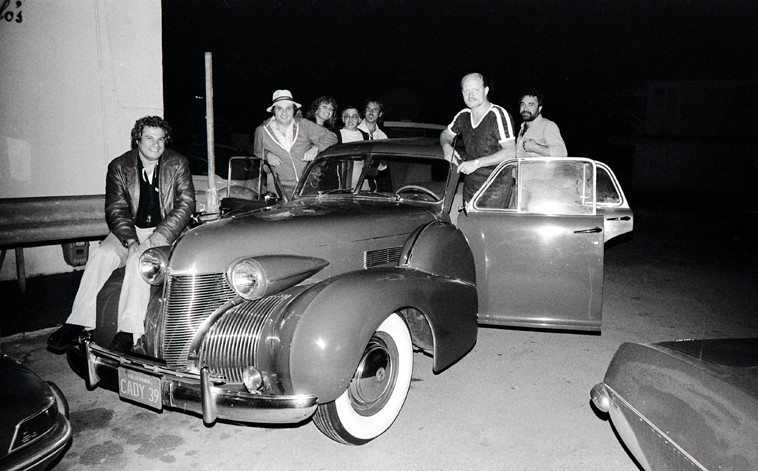 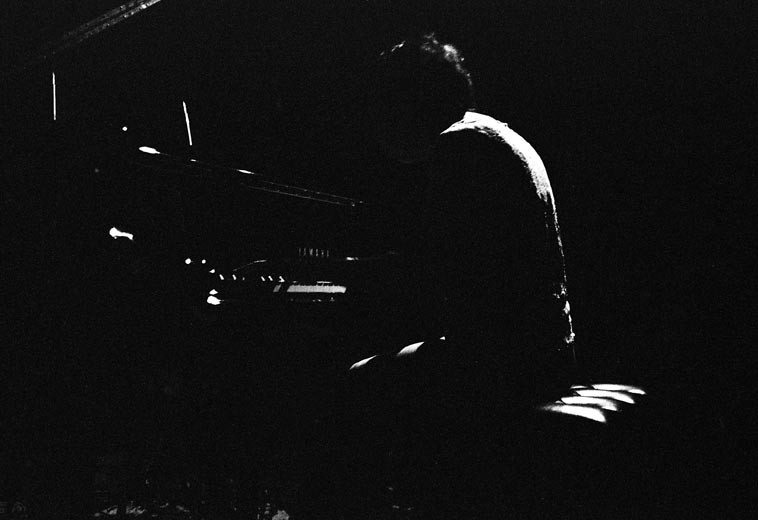 Virg Dzurinko — we have a tradition of jumping off the subway at 103rd and walking up Broadway so Virg can have a smoke and I can have a blueberry parfait from Westside Market, always at night, always after a session — this is her in solo at The Stone — September 23, 2009 — photo by Mark Weber 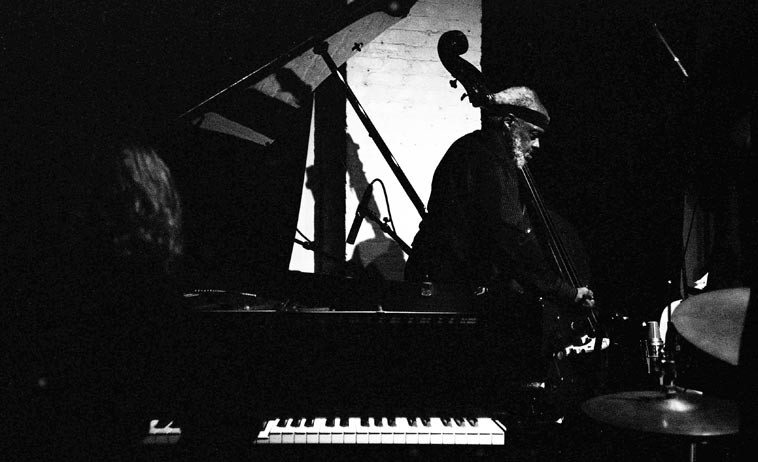 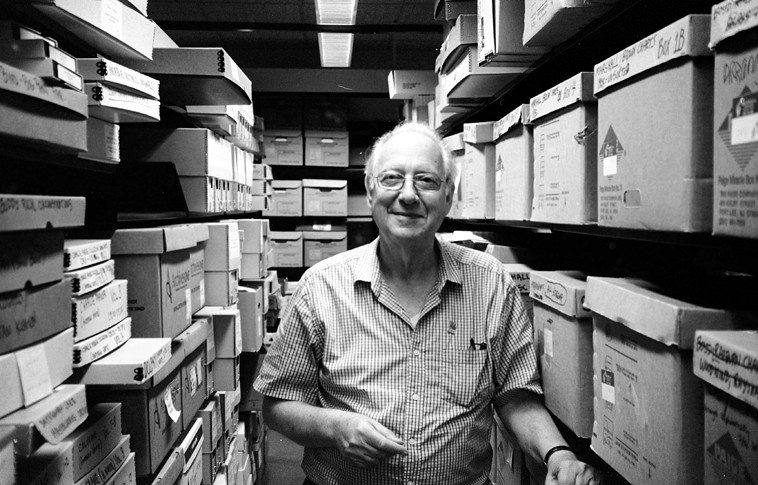 Dan Morgenstern in the stacks at Institute of Jazz Studies, Rutgers University, Newark, New Jersey — one of the great scholars and gentlemen of jazz and a literate exquisite historian — August 9, 2011 — photo by Mark Weber 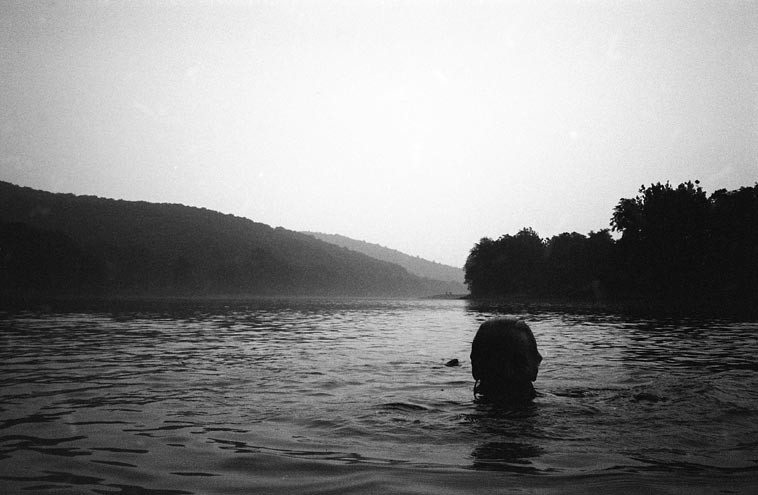 Kazzrie Jaxen is a priestess, a pianist in the Tristano trajectory, she communes with trees, rivers talk to her. Or, should I say: the rivers and trees talk to all of us, Kazzrie actually listens. This is one of the great rivers back east, the Delaware, passing through Kazzrie’s village of Callicoon, upstate New York. That far shore is Pennsylvania. August 7, 2o11 — photo by Mark Weber 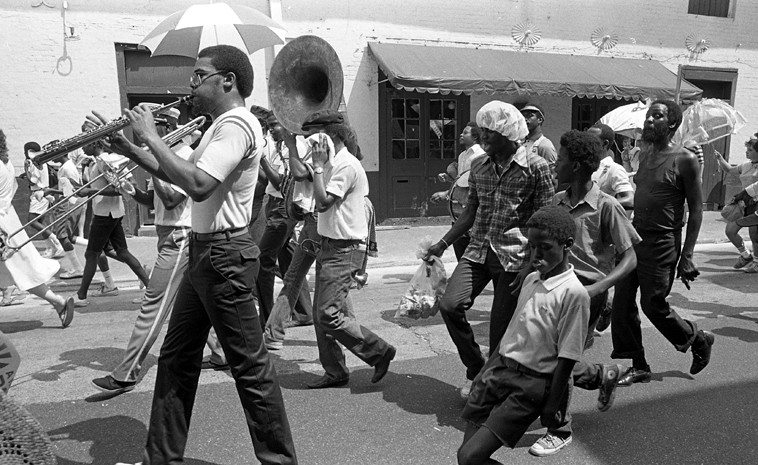 New Orleans parade — the Histories tell that we are to parade for the dead, march with them onward — Charles Barbarin Memorial Brass Band — July 3, 1982 — French Quarter — photo by Mark Weber — In 1929 the Rio Grande in Albuquerque almost claimed the Master of Time & Space Lester Young but for his friend Ben Webster who saved him from joining the Barge of the Dead. 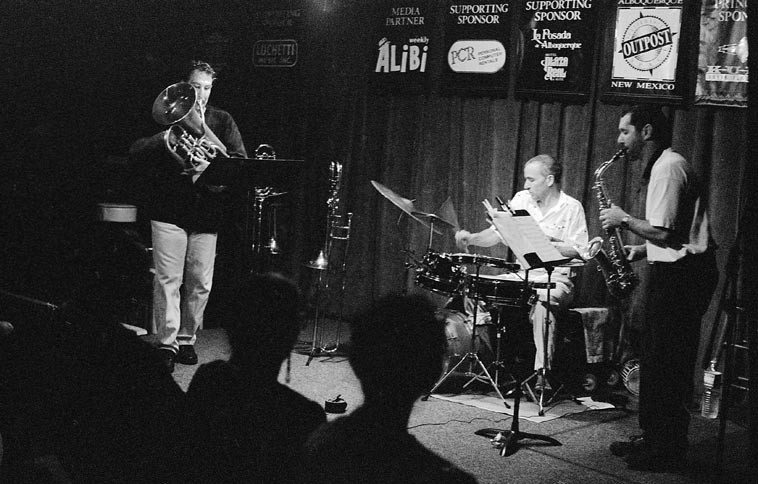 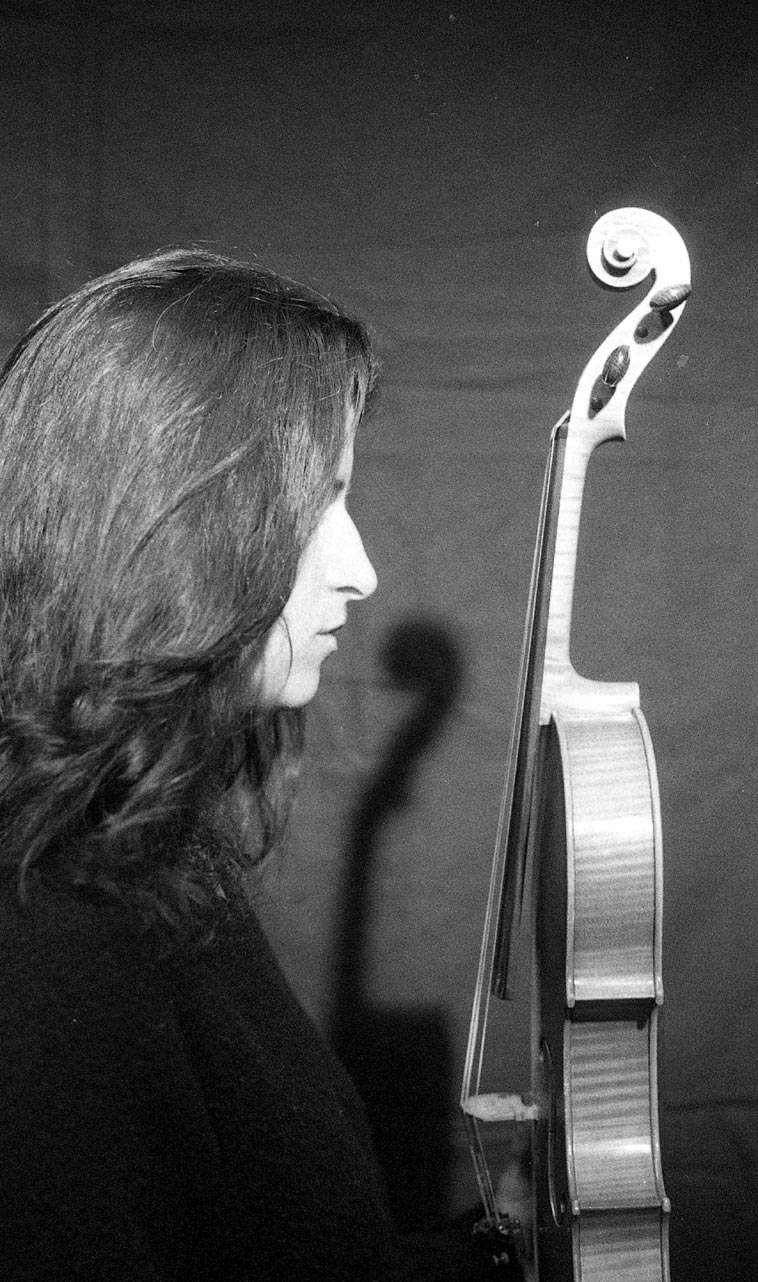 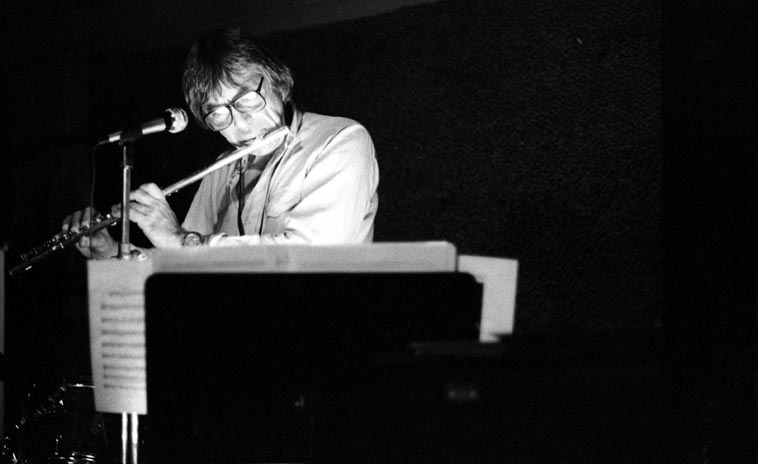 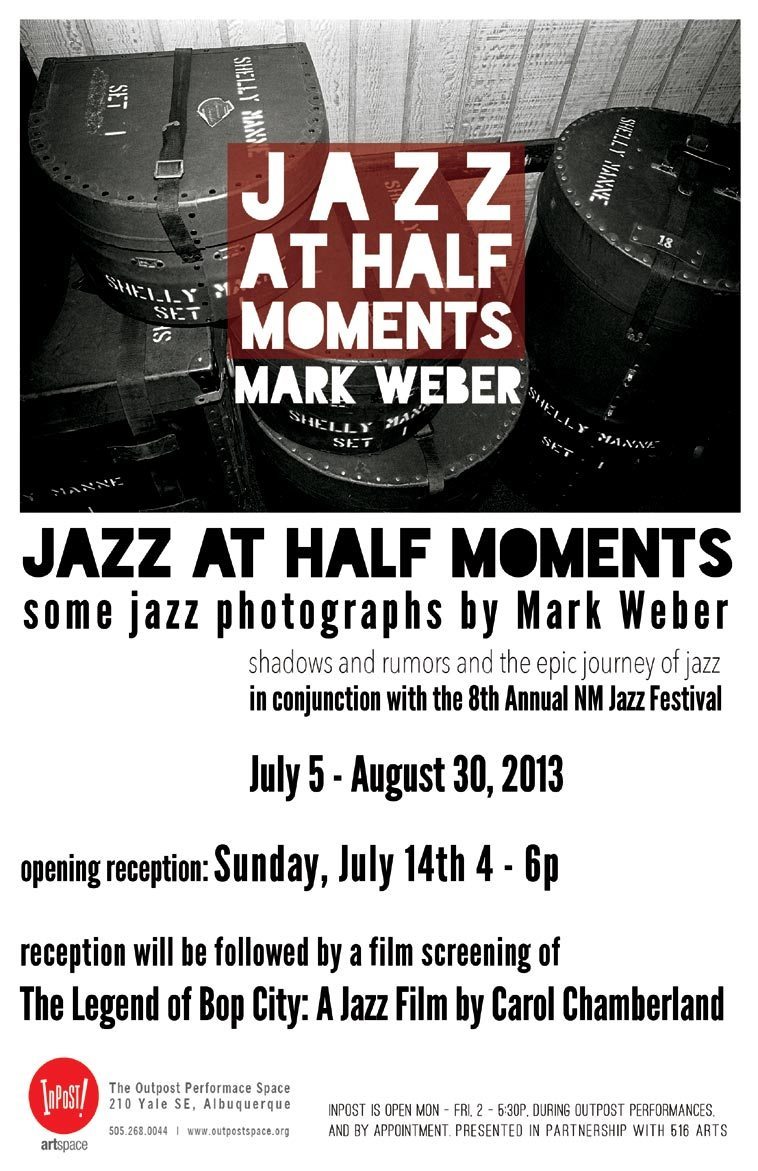 Please Note: Click the image above for more detailed information on the 8th Annual NM Jazz Festival or go here…