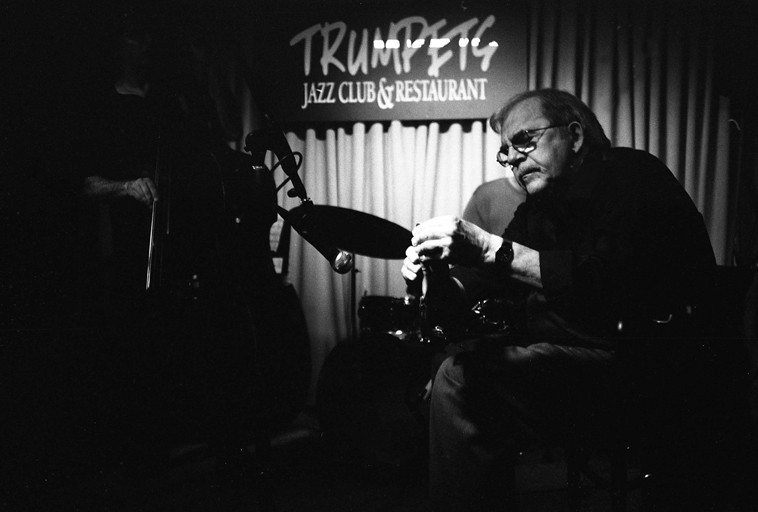 I would sure have loved to have been in Los Angeles between September 1956 and April 1957 when the Warne Marsh Quintet was playing long weekends at Whistlings Hawaii on Sunset Blvd in Hollywood (near Cahuenga) — in fact, I was in Los Angeles then but was only 3 years old. Actually, we lived east of L.A. in Pomona at that time, but in 1954 my Mom & Dad & me lived smack in downtown Los Angeles while Dad went to Woodbury College on Wilshire Blvd (not too far from The Haig) courtesy of the G.I. Bill. But, enough about me.

Both Warne Marsh and Ted Brown bounced back & forth from Los Angeles to New York City continuously over the years. Warne was raised in L.A. and first arrived in NYC October 1948 as part of the Buddy Rich Big Band. Ted Brown was raised in Rochester and came to L.A. (1942) with his family during his high school years. In 1948 Warne and Ted are 21 years old and studying with Lennie Tristano in NYC. Both are participants in the legendary jam sessions at 317 E. 32nd Street which lasted till 1955.

After eight years in NYC Warne returns home to Los Angeles in August of 1955 and in Spring of 1956 pianist Ronnie Ball arrives in town followed by drummer Jeff Morton which sets the stage for Warne to form his quintet along with bassist Ben Tucker and guitarist Don Overberg. Ted Brown arrives in L.A. August 1956. Overberg leaves to work with Peggy Lee. September 1956 the Warne Marsh Quintet opens at Whistlings as a two-tenor outfit. And luckily we have recordings. Art Pepper was in and out of the band and appears on FREE WHEELING.

South Sea Island decor was all the rage in the late 1950s Southern California. Restaurants, bars, gas stations, apartment buildings were all dressed up with Tiki poles and palm fronds and Easter Island heads. The bowling alley where my Mom hung out was South Sea Island with cocoanuts for bowling balls ( I jest ). Whistlings was one of these places. Minus the bowling balls. 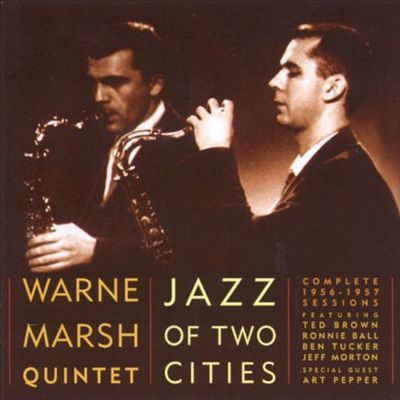 Albums (vinyl) released under titles JAZZ OF TWO CITIES and WINDS OF MARSH and FREE WHEELING. And subsequently in 2012 an old tape of the band live at Whistlings cd called WARNE MARSH-TED BROWN LIVE IN HOLLYWOOD 1957. See Jack Goodwin’s discography of Warne Marsh for details. More details in Safford Chamberlain’s biography on Warne AN UNSUNG CAT. To riff off an image borrowed from Ira Gitler: The tandem saxophone lines of Ted & Warne crawl like tendrils of ivy intertwining up a melodic trellis. (Ira was writing about Zoot & Al.)

Nowadays, Ted Brown continues to gig regularly — I am writing this while listening to his ebullient new cd TWO OF A KIND with saxophonist Brad Linde (while I await his other new cd POUND CAKE w/ trumpeter Kirk Knuffke) — as well, he teaches saxophone technique via Skype from his home in Riverdale, New York. Check his website for details.

I wrote him to ask what the deal was about the cover photograph to FREE WHEELING. 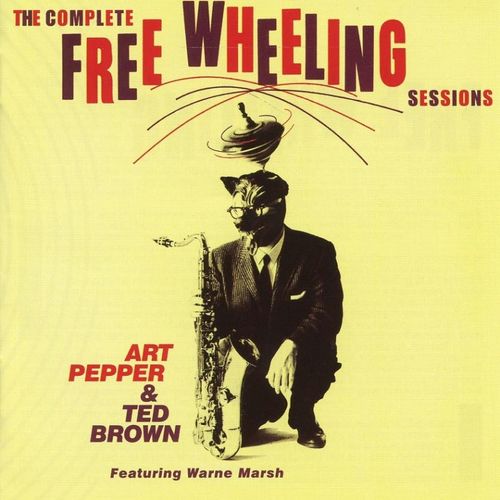 About the FREE WHEELING album…

We recorded that in Hollywood in December 1956. There were no photos taken at the recording. My wife and I returned to New York in April 1957. I contacted the Vanguard office in New York and they knew nothing about it.

I called them a few more times and the main thing they wanted was a title for the album. So they said they would call it “Free Wheeling” and the cover would have a photo of the Los Angeles Freeways at night…so I said OK. The next time I called they said the Freeway photo didn’t work out so they were going to use bicycle wheels on the cover…so I said OK fine…please just do it.

Finally in the fall of 1958 they called me and said they had good news…they were sending me a box of LPs. There was no discussion about the cover or anything. When the package arrived I opened it and there was that ridiculous cover with someone (not me) holding a saxophone with the mouthpiece upside down, with a top spinning on his head and wearing that stupid wolf mask!!

I called Vanguard and never got an explanation who decided that cover. It was very frustrating to have that as the first recording in my name.

A few years later I was playing on Long Island and a young student of Lennie’s asked me if I still had that wolf mask!! So he obviously thought I posed for that picture.

Anyway…that is the story. 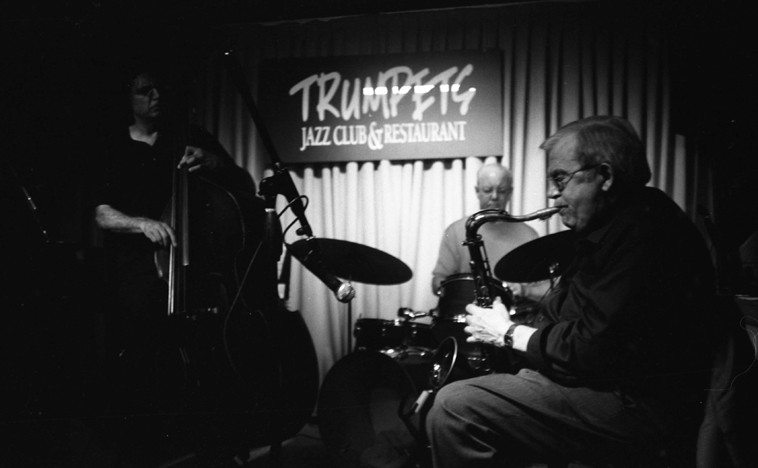 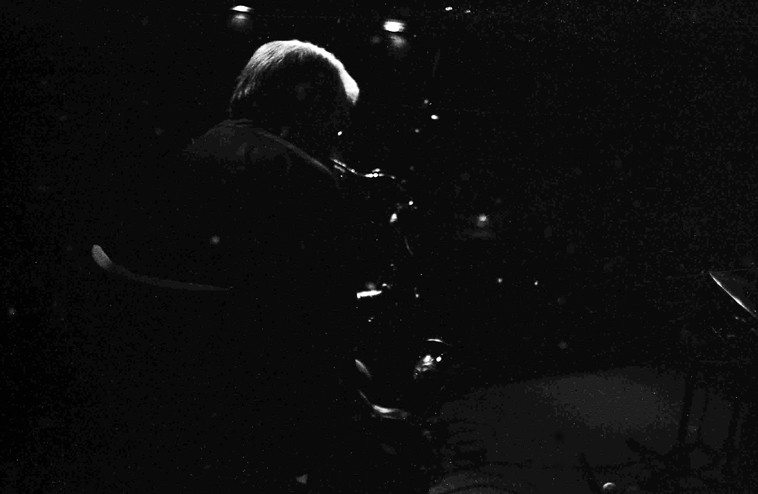 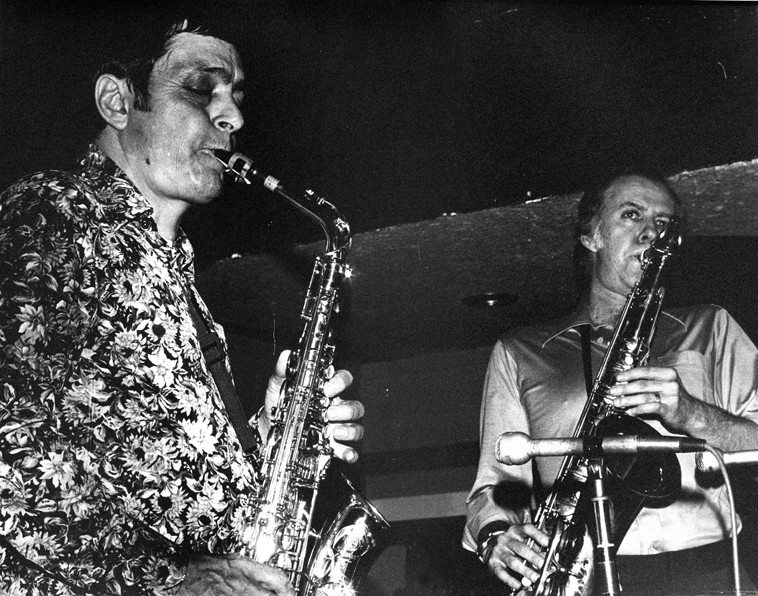