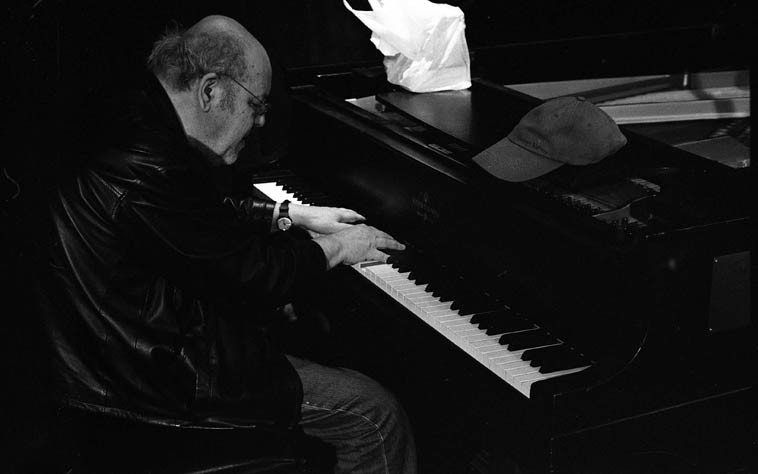 One of my all-time favorite bands is the ICP out of Amsterdam. For awhile there they made Albuquerque a regular stop on their annual tours of America. This band can literally do it all. On one of their visits I was given the job of driving the van, hauling them back & forth from hotel, the club, restaurants, and back to the airport. Mostly you just drive and act as tour director, showing them where Lester Young’s father had a music store in 1929, and the house where Harry Partch spent his high school years. On occasion they’d speak their native tongue when they didn’t want to include me, as in the shuttle back to airport the morning after their gig when they were still annoyed that I had refused to run out at intermission and procure them another case of wine. I don’t do that, (not part of my program, as we say). Sorry. 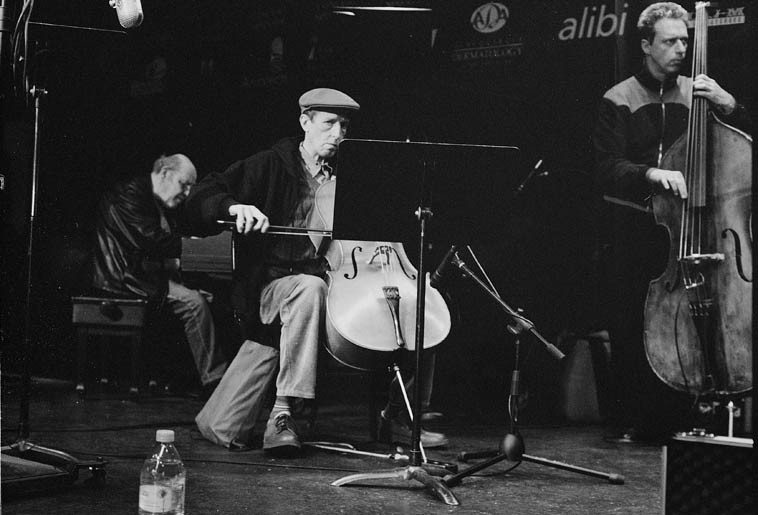 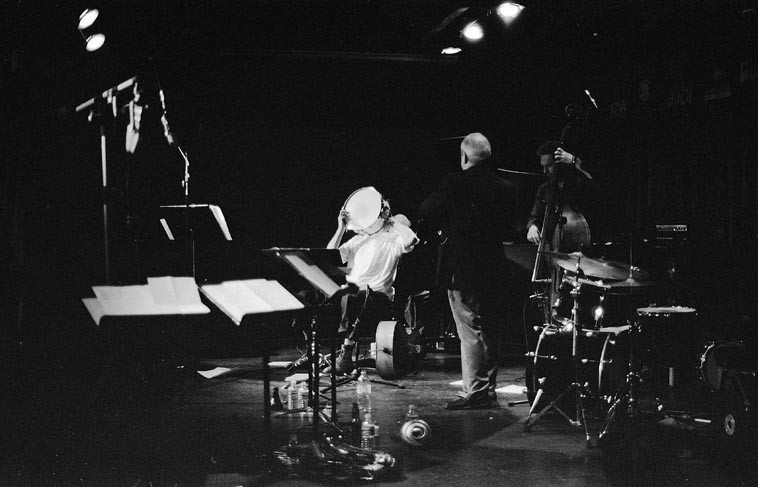 Han Bennink, snare drum; Misha on piano (obscured); Kenny Davern, clarinet; Ernst Glerum, bass — after the rehearsal all the rest of ICP went to dressing room to eat one of Riha’s home-cooked meals while these 4 jammed on an old standard, and I sure wish it had been recorded, whew, it was off the map —- March 23, 2006 — photo by Mark Weber — Note that you see both of KD’s ribbon mics: the RCA 44 (1930s) and the RCA 77DX (1940s) 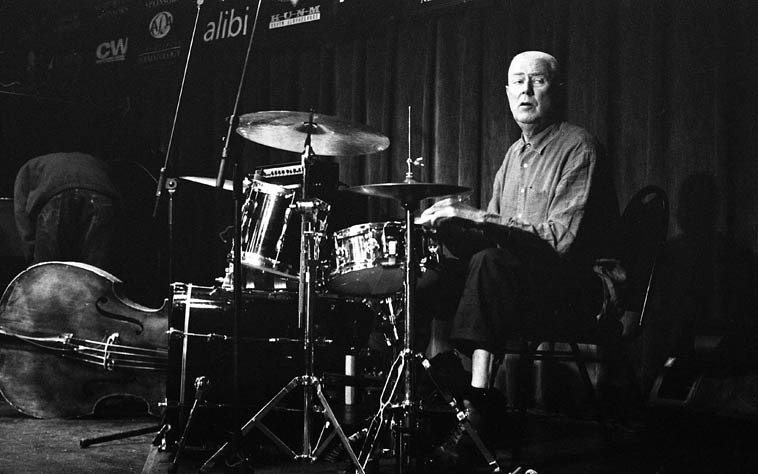 Han Bennink — March 23, 2006 — earlier this day, with the help of Michael Moore, Han came on my radio show and played “desktop drums,” and Michael demonstrated the clarinet solo to “High Society” — I had tried to get more of the band to come on the show but they dodged that idea with respects that they wanted to sleep in (my show begins at Noon) — thanks to Michael he urged Han to come around and we had a ball, I spun records and Han played along with them! — photo by Mark Weber — note Han rolled pant cuffs ala Cliff Leeman 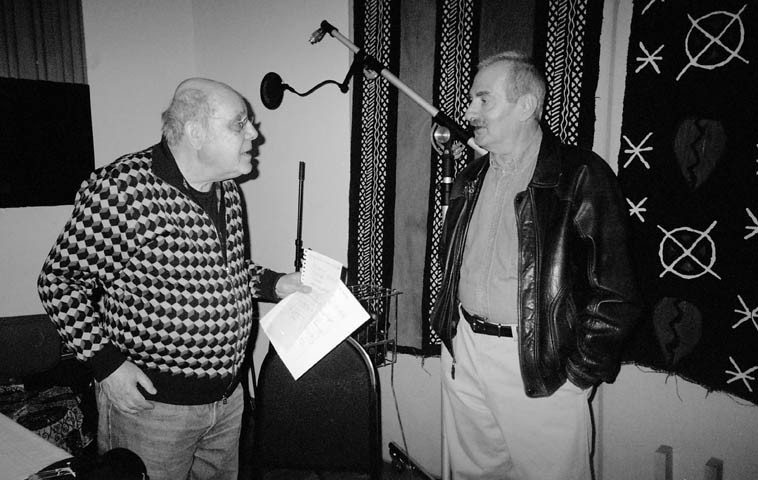 This is proof that how a jazz musician operates is more fluid than merely being trapped in a category. Kenny Davern is known for his Condon-inspired vision of jazz but he also went on record in dOWNBEAT voicing his approval of Ornette & Don Cherry, going against the tide of negative reviews they experienced upon their 1959 arrival in NYC. Misha is giving KD the full story on his uncle, the conductor Willem Mengelberg, having been falsely accused of being a Nazi collaborator — October 25, 2004 — backstage at Outpost — photo by Mark Weber 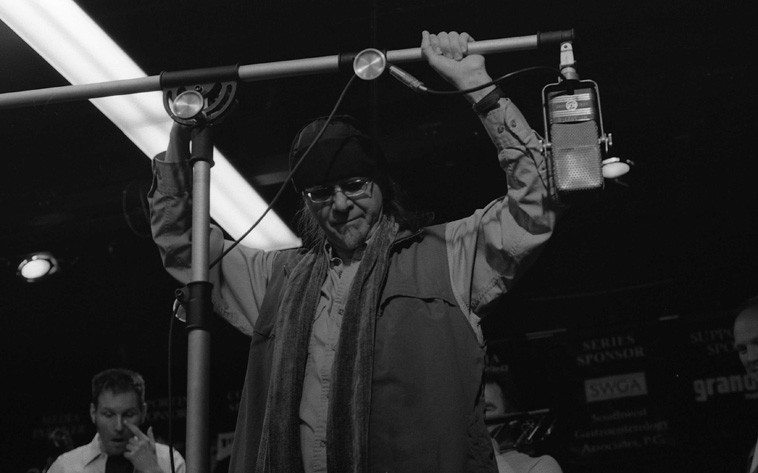 Recording engineer Manny Rettinger setting up Kenny’s vintage 1930s RCA 44 ribbon mic — KD had scored these from the RCA studio that was closing operations on Manhattan a dozen years previous — these concert recordings came out tremendous ( I think we also used an RCA 77DX on this date, also from Kenny’s collection) — March 23, 2006 — photo by Mark Weber

One of my stand-out memories with this formidable group (ten members plus road manager) was us driving down Central Avenue (Rt 66) and Susanna the manager is catching up on business with Misha, who is sitting dead center of the van, he has demurred on one point and she reasserts that certainly he remembers this particular business proposal, and he theatrically shouts “I remember nothing!” and the entire band erupts in convulsive laughter — all being well familiar with Misha’s memory lapses, due to advancing age, but he seems to be quoting the actor Maximilian Schell who flips out in the 1975 movie The Man In A Glass Booth, and climbs inside the delusion that he is a Nazi SS death camp commandant when in fact he is a Jewish Holocaust survivor (Adolf Eichmann was kept inside a glass box during his 1961 war crimes trial). Misha’s joyous exclamation was just as crazy and absurdist as the incendiary Maximilian was. It was cosmically hilarious, I about drove the van off the road.

Amsterdam must truly be an amazing place to spawn such a band — four of the eleven are transplanted Americans (reeds Michael Moore is from Northern California; Susanna is from some place back east like Boston; Tristan Honsinger is from Vermont; Mary Oliver is from San Diego, or, at least, that is where she took her degree) — If I were rich I’d hire them for a few days studio work to record some of my poems — the others in the band have coalesced from all over Europe —- without too much thought one could describe their sound as organized racket, or quantum abandon, proof that if you feed synergy, fate will take over all for the good — a supernova — actually, this music is highly organized, they’re just so comfortable with it that they stretch it out in all directions.

I asked Kenny Davern, after he’d played with them, what was up with the cello guy and Kenny leaned forward, “He’s mad as a hatter!” He loved it. 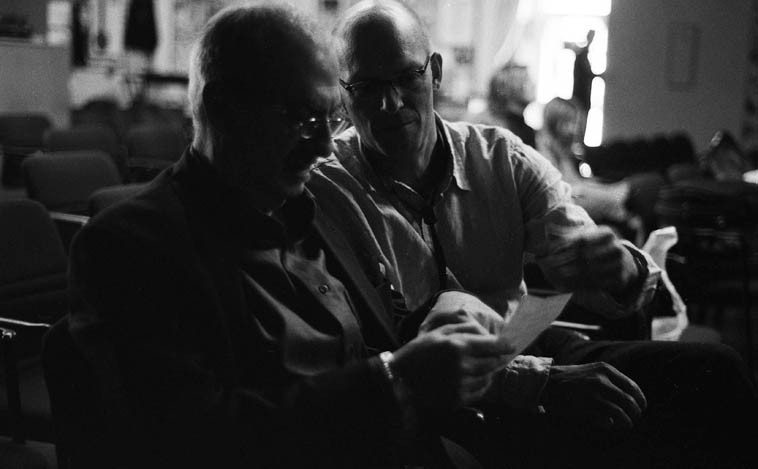 So, Kenny Davern met the band on their 2004 swing through Albuquerque and expressed such enthusiasm for what they were doing that they asked that he join them for their March 23, 2006 concert at Outpost Performance Space — this is Kenny and Michael Moore at the rehearsal that day — photo by Mark Weber 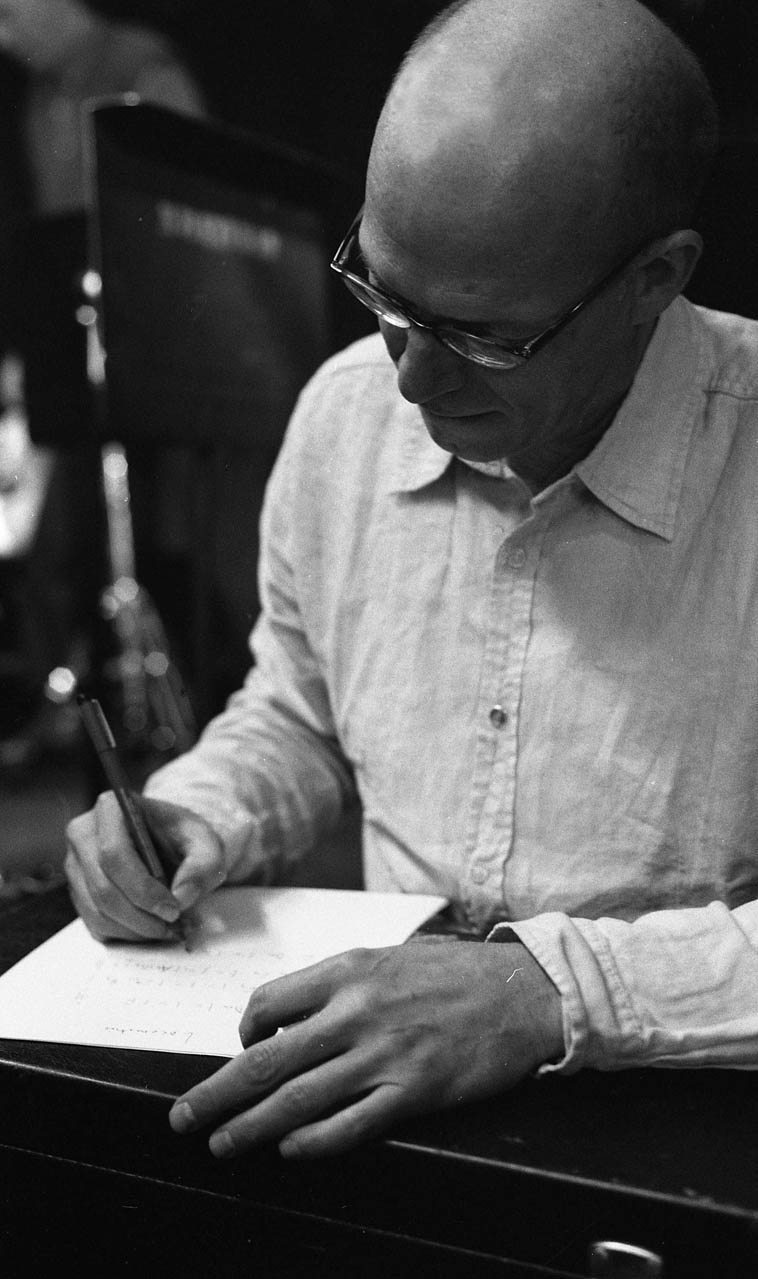 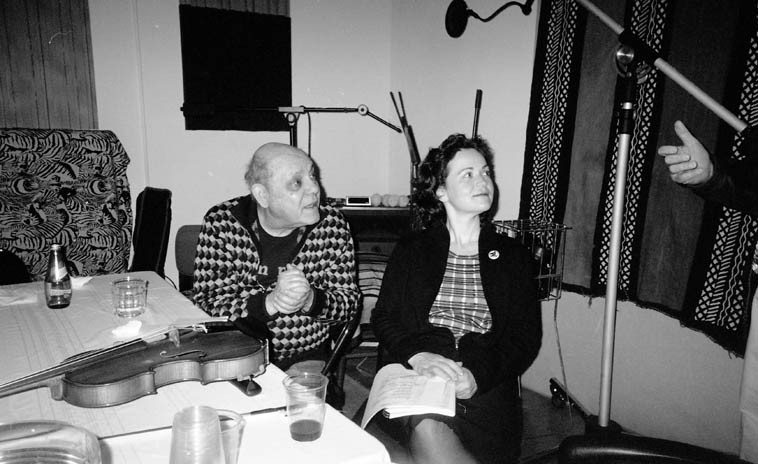 Kenny Davern was devoted to the conductor Wilhelm Furtwangler and was a scholar on European classical music. The evening that I had first convinced KD to check out ICP Misha is taking a piano solo and halfway in the middle he coasts for a minute to take a drink of water while his left hand twiddles the ivories in a mock-serious fashion — there is always a strong current to subvert decorum in this Dutch outfit — I look over at Kenny across the room and think to myself He’s going to kill me. I had told him over the telephone that he’d be blowing it if he missed this band, and now I’m dead meat.

And then, at the intermission break Kenny rushes up to me and is crazy with enthusiasm for what he’d just heard. So, we go backstage and the band is knocked out to meet Kenny and immediately the guys start sorting through their library and put together a set of 1930s music just for Kenny. After which, at end of evening, Kenny begged them in a voice of feigned innocence and wonder, “Take me with you,” as if to fulfill his dream of running away with the circus.

There’s something that Doctor Watson said about his friend Holmes that reminds me of Misha Mengelberg. They are at a concert in London: “My friend was an enthusiastic musician, being himself not only a very capable performer, but a composer of no ordinary merit . . . . In his singular character the dual nature alternately asserted itself, and his extreme exactness and astuteness represented, as I have often thought, the reaction against the poetic and contemplative mood which occasionally predominated in him. The swing of his nature took him from extreme languor to devouring energy, and as I knew well, he was never so truly formidable as when , for days on end, he had been lounging in his armchair amid his improvisations and his black-letter editions [science books]. Then it was the lust of the chase would suddenly come upon him, and that his brilliant reasoning power would rise to the level of intuition, until those unacquainted with his methods would look askance at him as on a man whose knowledge was not that of other mortals. When I saw him that afternoon so enwrapped in the music at St James’s Hall I felt that an evil time might be coming upon those whom he had set himself to hunt down.” 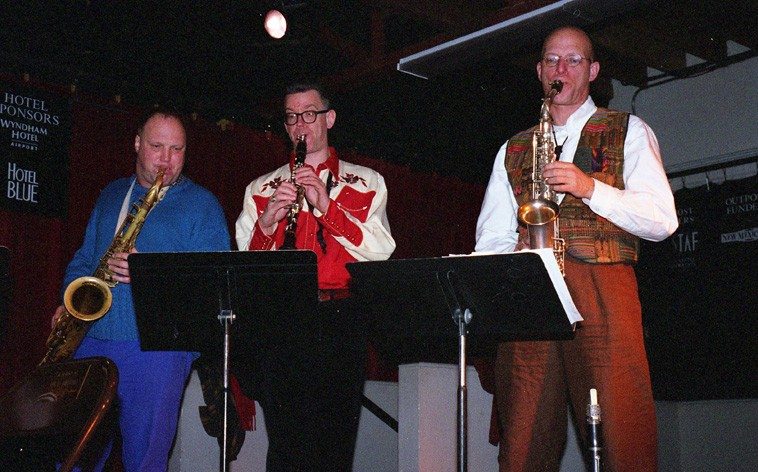 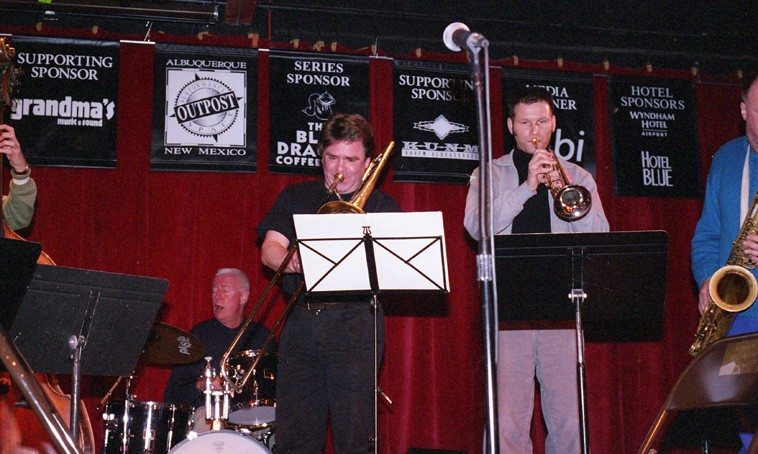 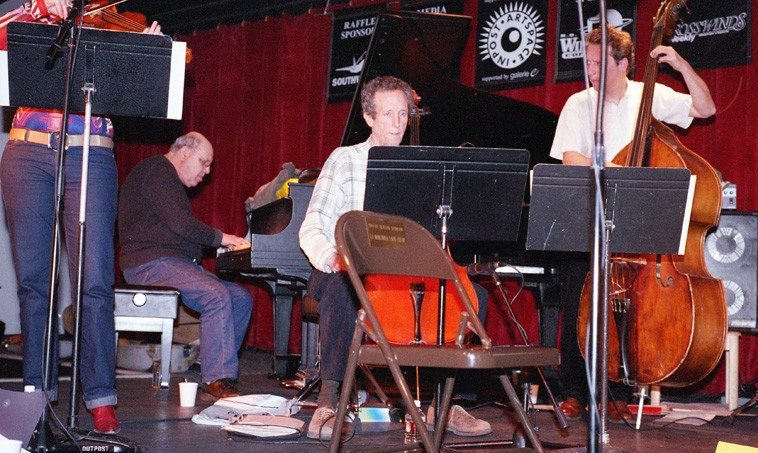 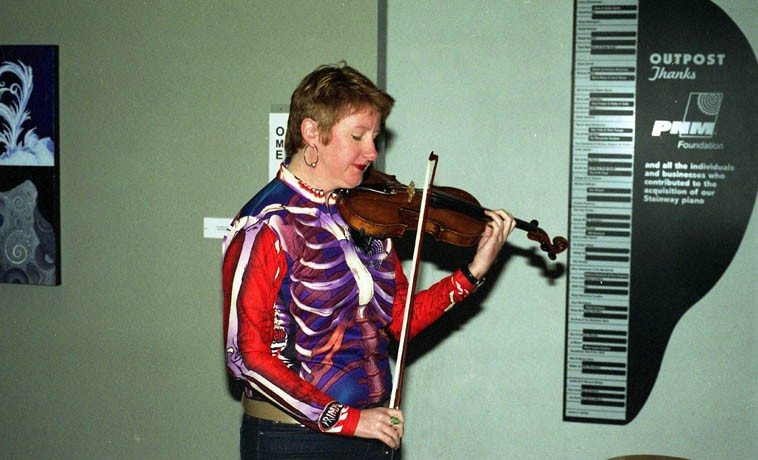 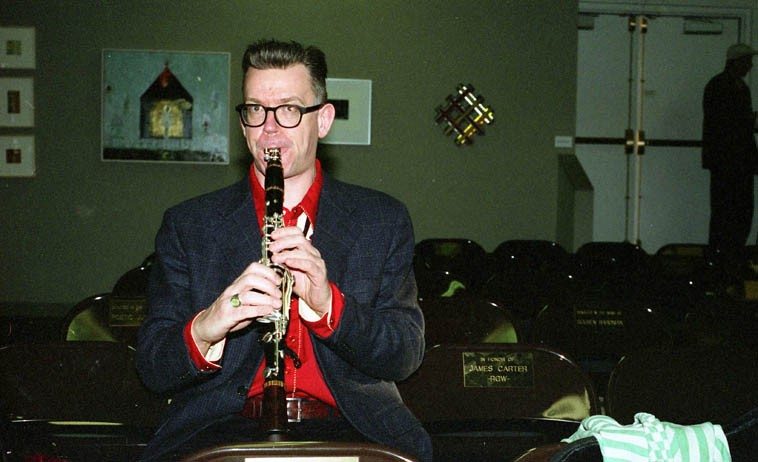 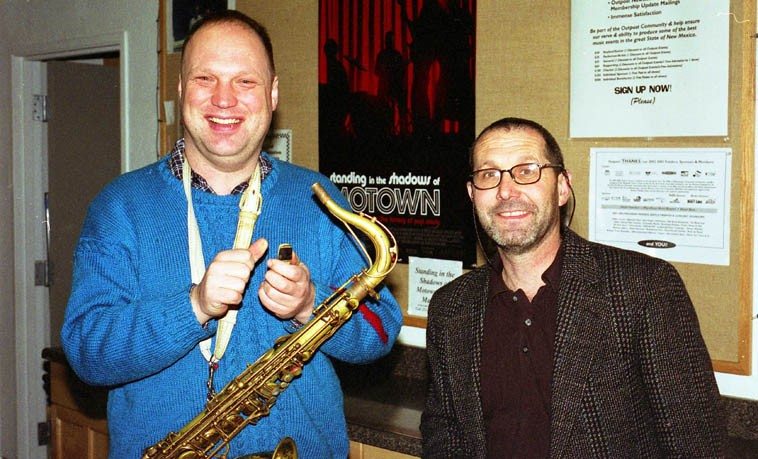 Toby Delius and Tom Guralnick — March 17, 2003 — (that movie Standing in the Shadows of Motown is a knock-out — Joan Osborne slays me with “Heat Wave” and “What Becomes of the Broken Hearted?” as well, Me’Shell Ndegeocello, Ben Harper, Chaka Khan, killer, and Bootsy Collins, a riot) — photo by Mark Weber 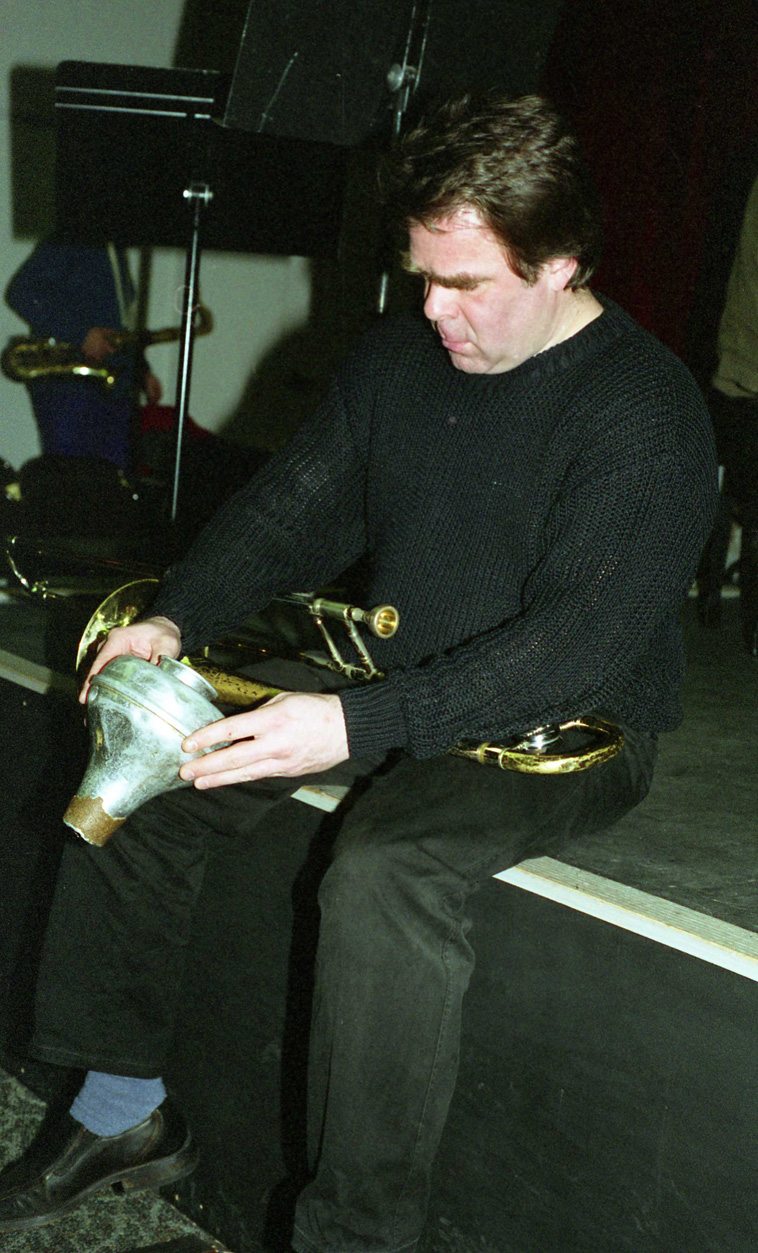 And they used to be a lot more anarchistic, as if that’s possible, something more akin to Tristan Tzara, back in the 1970s — maybe coming of age in the aftermath of WWII Europe in shambles has something to do with their (Misha & Han’s) outlook.

To get an idea what Han sounded like on my radio show, watch this short video. We turned those New Mexico airwaves inside out that afternoon. I have one of Han’s cracked & splinter’d drumsticks autographed sitting next to my turntable which he also decorated with his art.

As we drove down Central Avenue after the concert in 2006 I told Misha that Kenny expressed a desire to play with them again, and Misha said, “Then he would be welcome.” 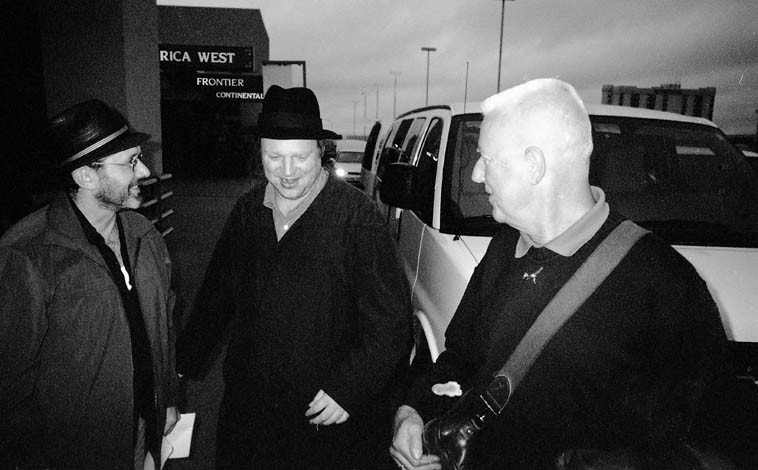 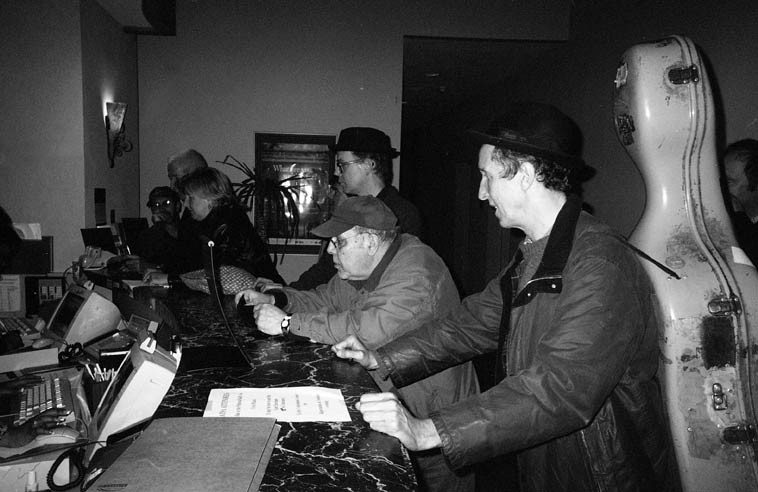 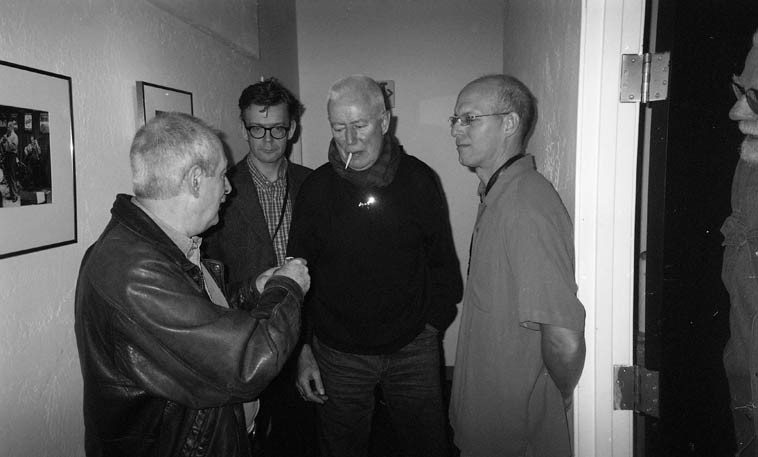 Kenny Davern offers Han a light while Ab Baars and Michael Moore keep watch — at far right of frame is Tom Albach of Nimbus West Records who knows the band from his late-80s sojourn in Amsterdam — October 25, 2004 — photo by Mark Weber ——- Kenny came backstage at intermission to the surprise of the band and exuberantly expressed how much he dug what they were doing and told Han that he knew where he got that habit of rolling up his kick drum pant leg: from Cliff Leeman, which is displayed prominently on the renowned Eddie Condon album JAMMIN’ AT CONDON’s (Columbia 616) and Han went nuts and admitted it was all true! 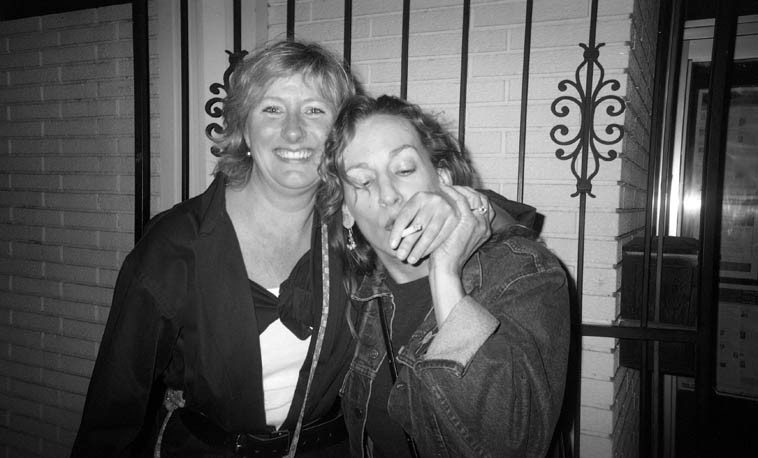