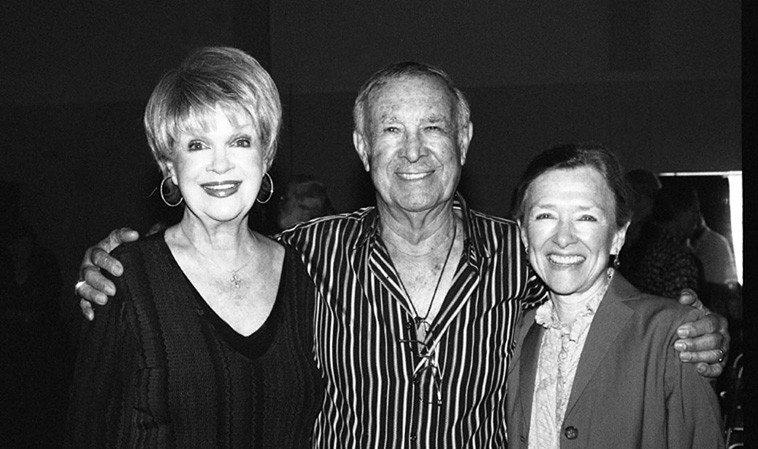 Sue Raney, Gene Merlino, Melissa Mackay, three of the five L.A. Voices (John Bahler lives and works in Branson, Missouri, alas, L.A. is a long drive) — May 31, 2o14 in the presentation hall of Local 47 Musician’s Union, Hollywood, for Med Flory’s Memorial (Med was the bass in L.A. Voices, a group he formed to accompany his Supersax on their last 3 albums, works of such chimerical evanescence and luminosity their voices are like a diaphanous curtain into another world — photograph by Mark Weber — I was sitting with Marty Morgan and had asked if she’d introduce me to Sue Raney, and while I photo’d Sue suddenly over the P.A. comes Supersax + L.A. Voices ( ! ) and Sue tells me that Gene Merlino and Melissa Mackay are there, and next thing I know there they are in front me and they’re singing along with their transcendent recordings! It doesn’t get any better than this, Med! — This photo was after The Jazz Wave, Med’s big band, under the direction of Lanny Morgan had played — Los Angeles at its best

SUE RANEY AND THE NEUROBIOLOGY OF SONG

There is a close correlation between language, music, and dance. The origins of these defining human characteristics seem to come from the same place.

If singing evolved first, say, as an outgrowth of mating rituals of our hominid forebears, or even before that as fight or flight shrieking in the face of danger learned from birds, or even as a concomitant gestural language and as the gestures fell away only the singing remained and that
eventually became a type of speech that wasn’t sung anymore . . . .

Singing goes back a long ways, dude. Before Bessie Smith grabbed a pigfoot and a bottle of beer. Before the buzzards in music publishing took Stephen Foster to the cleaners with “Oh! Susanna.” Before Cab Calloway did the Hi-De-Ho and before Alfalfa cracked his note. There are creation myths that speak of the human world having been created by sound: waves of harmony and discord: that our world was sung into being.

Either way, singers are fascinating creatures. For someone like Sue Raney, who began singing right out of the cradle, the anthropologists would like to have a little talk with. Meanwhile, we’ll be talking with her this Thursday from Palm Springs, California, via the telephone, over KUNM airwaves.

Please visit her website for a more detailed biography which in brief goes like this: She was born in McPherson, Kansas and grew up in Wichita. When she was in the 2nd grade her family moved to Albuquerque, New Mexico, circa 1946. Her father had a retail store on 4th Street in the 1950s known as Dick Claussen Appliances (Sue is of German-Danish extraction) and at age 12 she had her own radio show on KOAT, which was sponsored by her father’s business, and by age 15 her own 15-minute television show on KGGM-TV. Bobby Shew remembers her singing with bands during these young years. By age 17 she and her family have relocated to Los Angeles (1955) and she has a singing contract with Capitol Records. Makes dozens of records. She sings at John F Kennedy’s inaugural with the Nelson Riddle Orchestra. She records all through the 60s, appears to have taken the 70s off from making records, but was busy with a staggering amount of TV appearances, on Johnny Carson Tonight Show, Dean Martin, Red Skelton, Andy Williams, Mike Douglas, appearing with Henry Mancini, Julie Andrews, Johnny Mathis, Steve Allen, Bob Hope, Don Rickles, Bob Newhart, as well as being busy working in a jingle factory (“jingles” = singing product commercials and station I.D.s and suchlike). These years she also toured with The Four Freshman and worked Las Vegas. Wikipedia refers to this period as a “hiatus.”

And all of her recent projects like the remarkable records she makes with pianist/arranger Alan Broadbent.

Now, here’s the fun part. Sue has a remarkable memory and when I asked if she remembered where she lived in Albuquerque, here’s the list, in what I believe chronological order: 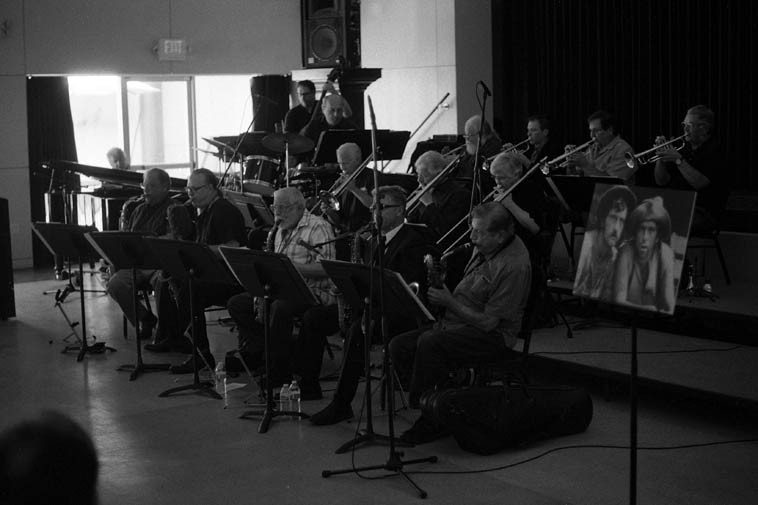 The Jazz Wave under the direction of Lanny Morgan — May 31, 2o14 — photo by Mark Weber — more from the Med Flory Memorial in a forthcoming post — Note the photo on stage with two cowpokes: that’s Med on the right probably from Bonanza tv series