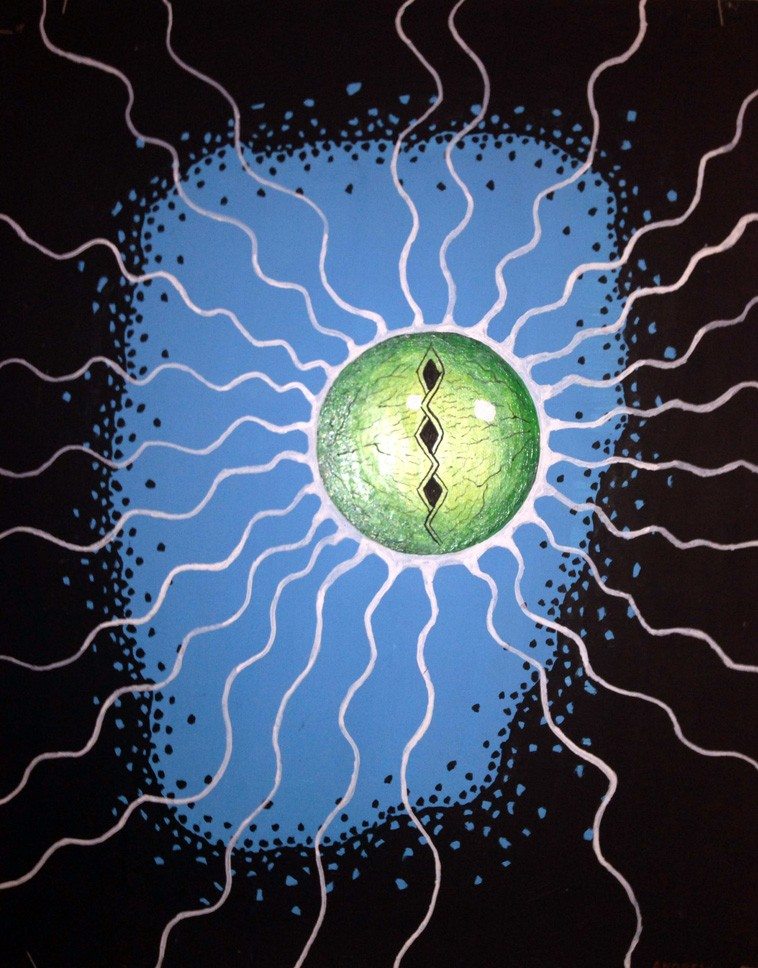 Painting by Andy Munz — Fall 1972 —- Andy was (still is) one of my 60s friends from back home in Upland, California —- this painting has hung in the living room of every house I have ever lived since he painted it —- photo by Kai Radius ( I needed a color photo of this and I was on telephone with trumpeter Hugh Schick and when I saw Kai out the window across the street, where he lives, I told Hugh I’ll call him back I need to ask Kai if he’ll do a photo for me)

for Scott MacNicholl, who was there, and for all of us
……………………..who survived or didn’t survive those times

We all fell down a rabbit hole —–
My Dad said, “I thought we’d lost your generation”

Am I really breathing through my belly button?

An explosion of curiosity & possibilities,
consciousness expansion: a tidal wave of spiritual questing

Why does my voice sound so far away?
It is me, right?
only my voice is way over there, and kind of faint . . .

It is our sacred duty in this life to rise above, to
…………………………….prepare for transcendence

I expected more fantastic visions, instead of this glowing,
everything is glowing —-

where are the caricatures floating out of the fog?
the spiraling mandalas?

(I’ve had better visions on heroin, but . . .
heroin is the dark side)

As the ever-changing wheel of impermanence informs us . . . .

I was on a sagebrush alluvial savannah the night men first walked on the moon
myself and my fellow voyagers tripping on LSD and that moon
was full and round and staring back at us, huddled together
in an arroyo with our bongos, flutes, and guitars, under
a pepper tree, silhouette of Mount Baldy, Ontario Peak
and Cucamonga Peak glowing

From what to what?
What to where?
Who to how?

Try hitch-hiking on acid — you can’t remember where you’re
going or why it seems like hours ago you got into this car
when you were only going ten blocks up to the mountains . . . .

One time Kenny Barreras & I had dropped some acid and were
suppose to meet some friends in the mountains that night but
wow, we were so confused, couldn’t remember
what was what and if we weren’t late because
it seemed like hours we had been traveling —- (Kenny was
interested in alchemy and magic and kept a dried toad he called
DaDum in a pouch that hung from his belt)(that always freaked
out the cops who were intent on keeping America
one-dimensional by hassling us longhairs)
Kenny was always fragrantly drenched in patchouli oil,
his tarnished Ankh and sacred beads —
I was wearing my teal blue marching band frock coat with the red piping
and brass buttons
and a coonskin cap with my pharaoh’s goatee
and biker’s boots —-

That was the norm back then, dress like that now
and they’ll reassign you to the Laughing Academy

When we finally got to Cucamonga Canyon
and found our friends, Jamie Berg the Provocateur, made us
strip bald and ordered us to dance while she lashed us
with a long leather whip (where did this whip come from?)
exhorting us to do The Naked Snake Dance —- we were
so confused! —- (for years we were taunted about “The Naked
Snake Dance” until it became legend) —- 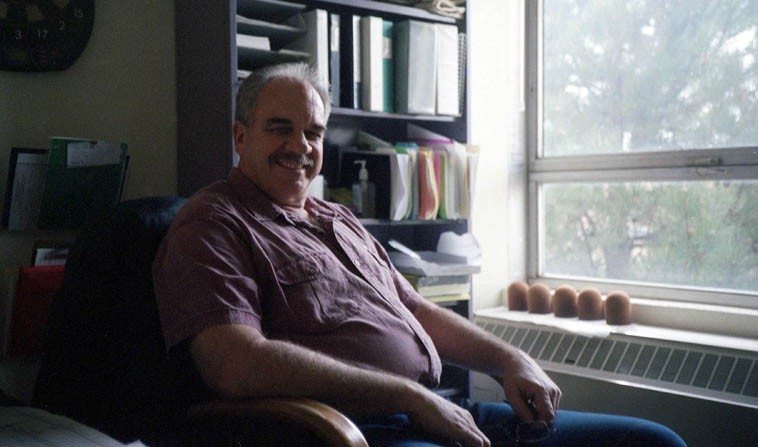 Scott MacNicholl, KUNM Operations Manager in his office (are those ‘shrooms in the window sill, or microphone pop filters?) —- A force for the good (Scott, and the shrooms too for that matter) —- Host of the Saturday evening Psychedelic Radio Head Shoppe —- February 8, 2o13 — photo by Mark Weber 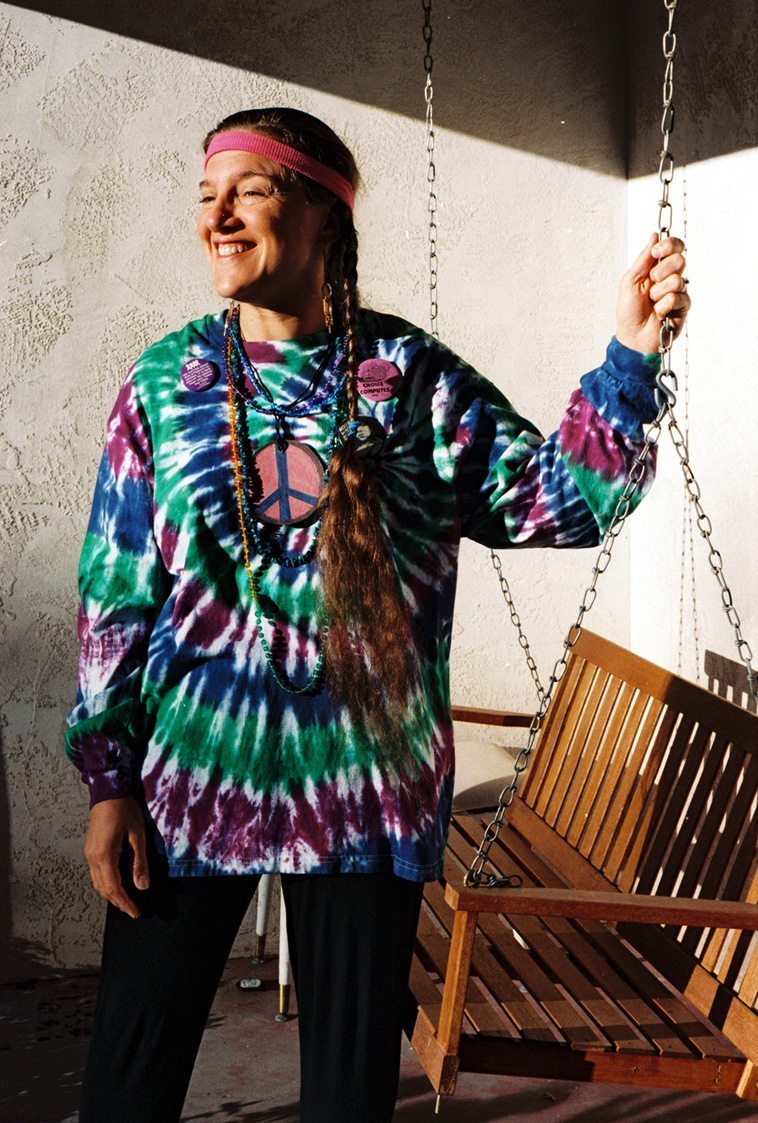 My wife Janet Simon, she always wanted to be a hippie, but instead she became a doctor —- this is her dressed for the office Halloween party — There’s a lot about her that’s like a hippie: she likes camping & hiking & sitting on the beach, yoga, vegetarian food, music, fun, probably why I love her —- photo by her husband — October 31, 1997 Albuquerque 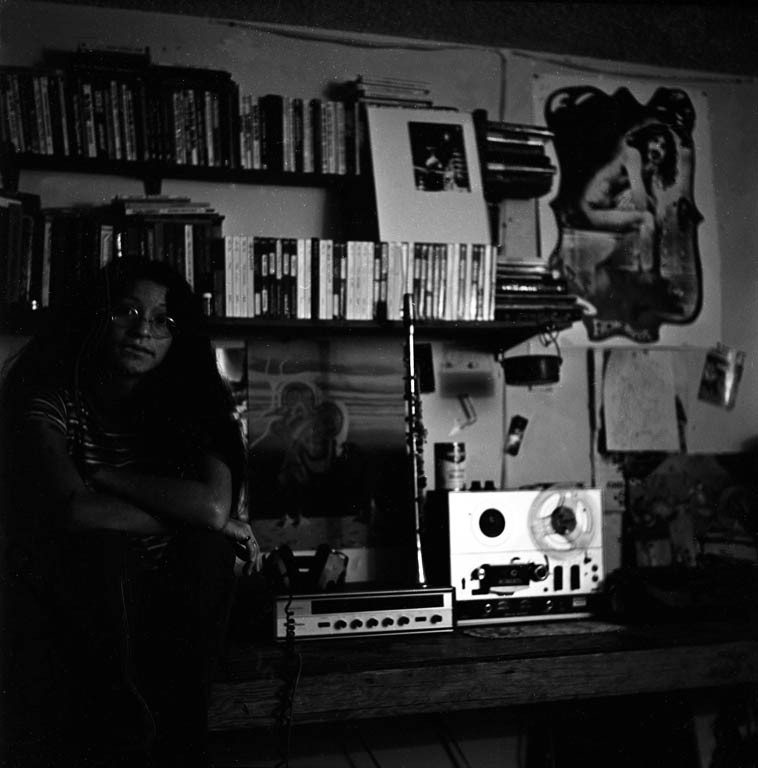 My bedroom during high school years —- 1971 — my Roberts reel-to-reel, my metal clarinet, my Realistic stereo receiver/amp, another Andy Munz painting, and my girlfriend Sharon Barreras —- photo by Mark Weber 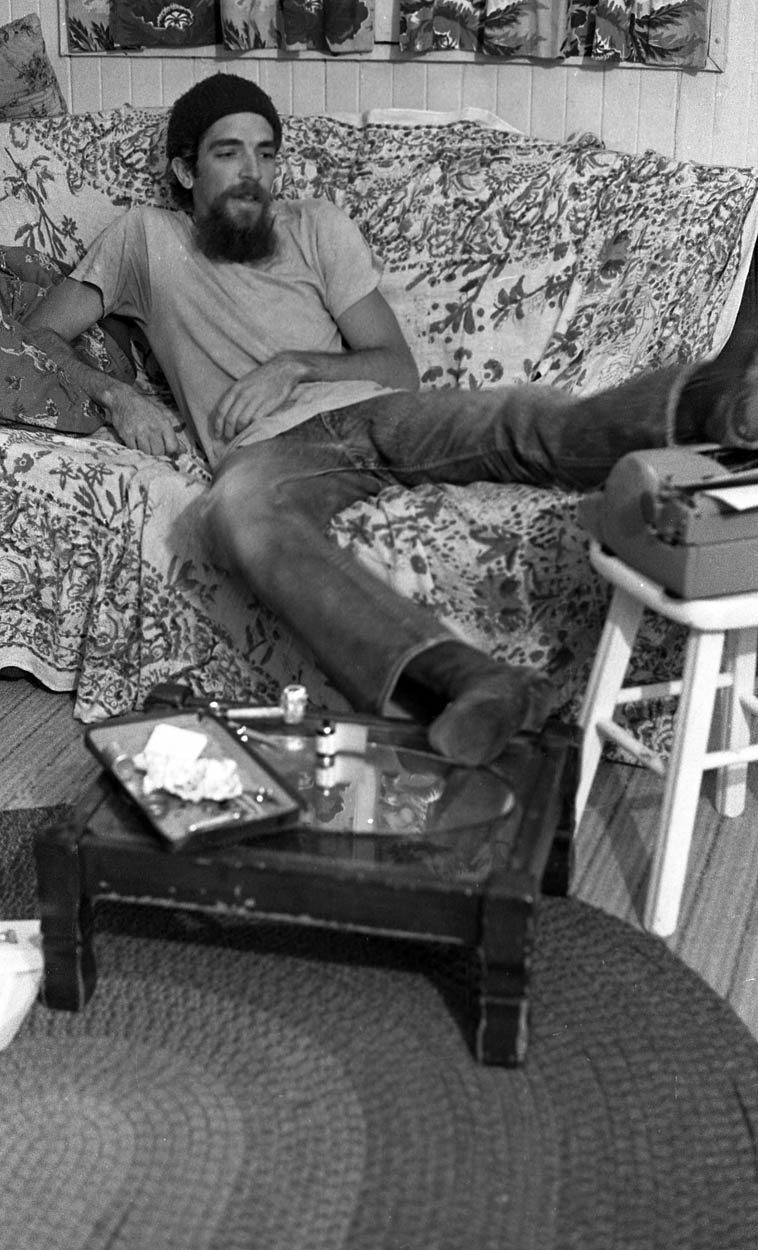 Me in the little house I used to live in ——– 400 1/2 Laurel Avenue, Upland, California — I bought that knit cap in San Francisco and wore it night & day for a couple years —- Note the Hardy boots! I wish they still made these, they zipped up the side and were suede —- November 1976