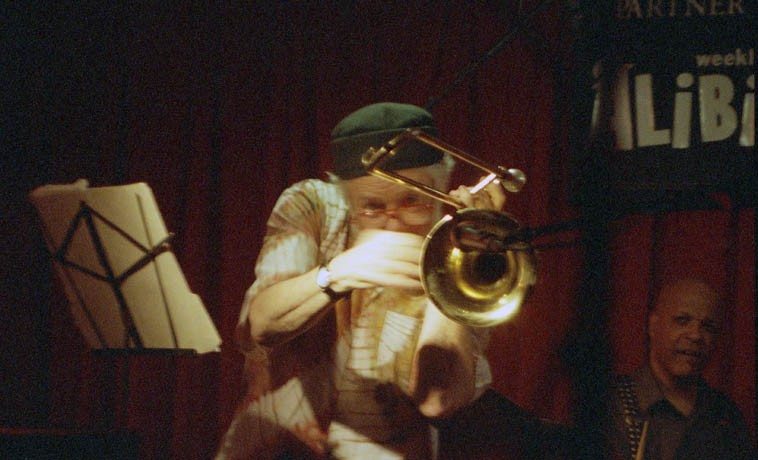 ROSWELL RUDD ON THE TELEPHONE

The avant garde needed people like Roswell Rudd. His irrepressible joyous spirit and unfaltering determination to express his creative soul would not be quelled. Can you imagine the very early 60s, the small group of jazz explorers who recognized other implications in the music and went there to see what they could see. A lot of what they were doing went against the grain, and so much was shaking apart in those years. There was a lot of opprobrium in the air. It took indomitable clear-eyed people like Roswell to stand up to it. We’ll be talking with Roswell Rudd today via telephone from his home in upstate New York. We’ll ask him about this journey he has taken from Dixieland to Herbie Nichols & Monk, to Archie Shepp out-ness. We’ll ask him what was going on in 1960 on lower Manhattan that birthed a movement which is still going strong to this day. 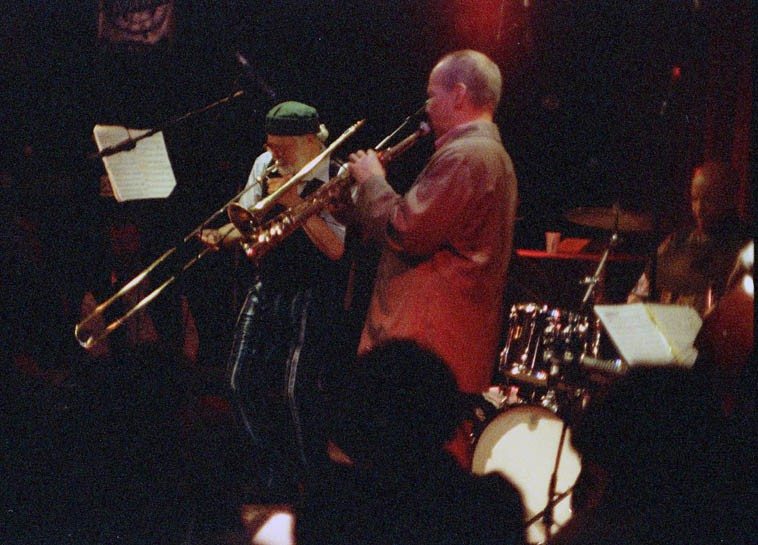 I asked a few people to contribute their thoughts about Roswell’s music —- Here’s Buell Neidlinger who first shows up on record with Roswell in 1961 on a Cecil Taylor date. It was Buell who suggested that Roswell has a lot to say and would be a great interview for my radio show:

Roswell is my oldest living music friend. we go back to 1951, listening to Louis and Jack T., Wild Bill and PeeWee, and playing a lot of that kind of music in bands i would put together for country club gigs, with Emmett Berry or Herman Autrey on trumpet, Gene “Honeybear” Cedric or Cecil Scott on clarinet, Ros, Dick Wellstood or Ralph Sutton on keys, and Harry Dial or Rudy Traylor on drums. As well, we played a lot one summer with Hod Obrien and Hop Rudd, Ros’s dad, on drums. then later in NYC we played with Archie Shepp, Don Cherry, Steve Lacy, Charles Davis,Den(n)is Charles or Billy Higgins, Cecil, and me, and recorded this — NYC R&B — for Nat Hentoff on Candid. (Clark Terry ended up on the sessions when Ornette forbade Don from playing on my session !) Roswell always fit into any situation !

Roswell Rudd on trombone seems to me to have inven- ted a trombone vocabulary which is the most logical extension of the Jack Teagarden/Lawrence Brown school of thought..one or two long burnished notes, maybe with a little lip trill, instead of the nervous, rapid, stiff, and staccato offerings of the usual bebop boneblowers (Curtis Fuller excepted).

(i think he might have used me in the NY Art whatever, had i not gone away to the Houston Symphony; sure woulda liked to play on Black Dada Nihilismus with Roi Jones on vocal !)

Roswell came to Yale after i had finished my one year there and had split. But, before he was a student at Yale, he used to come down to New Haven (1954) and play with the band we had started at Yale called Eli”s Chosen Six. (the soon-to-be cartoon editor at the New Yorker, and a great cartoonist himself, Lee Lorenz, was the excellent cornettist of our Condon-like band. 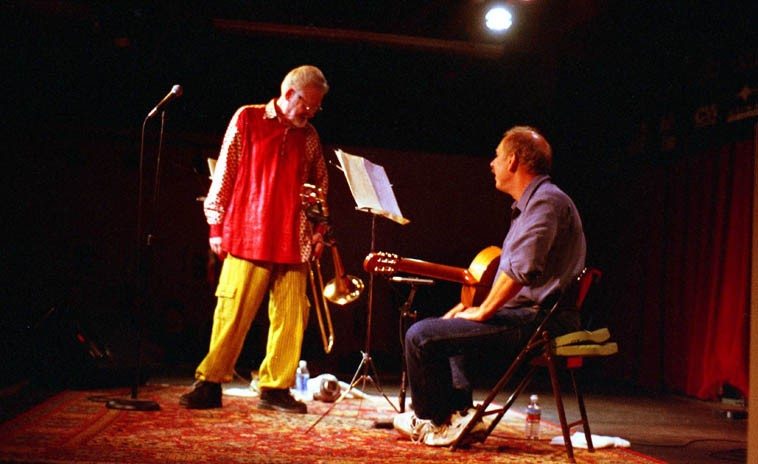 Roswell Rudd in duet performance with Duck Baker (who once reviewed a poetry CD of mine and said that I was no Kenneth Patchen of which my friends are still giving me a hard time) — March 28, 2004 — Outpost Performance Space, Albuquerque — photo by Mark Weber

“On any given night one can hear the entire history of jazz trombone in one Roswell Rudd solo.” —-Bobby Bradford [email 9/18/2o14]

I told Bobby that Roswell & Mark Dresser had just did a duet gig at Bard College the night before (Sept. 17) and Bobby added: 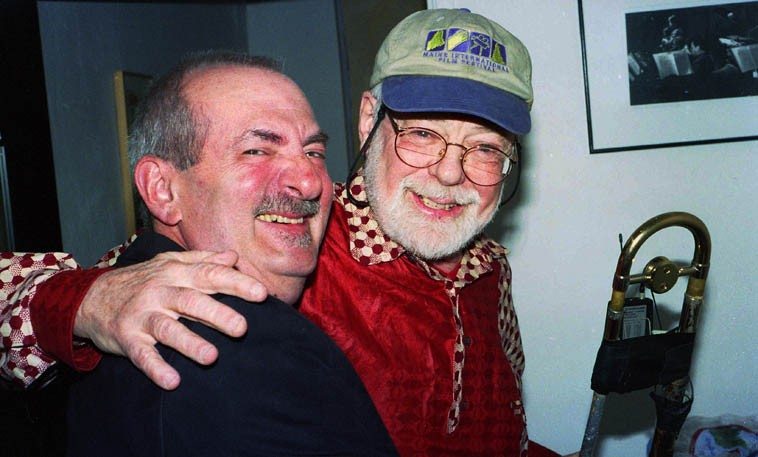 I asked Sheila Jordan to vet my opening paragraph to see if I had the right slant:

That sounds great so I wouldn’t change anything. Here’s my little thing. Roswell besides being a great musician is a great human being. He has the rare quality of kindness which seems to stay with him. I’ve never seen him mad or heard him put down anyone. Hey, maybe he does since I’m not with him 24 hours a day. He can play any kind of jazz music whatsoever from ragtime to dixieland to swing to bebop and beyond and make it swing. Not many musicians can claim that but my buddy Roswell can . . . So glad your doing this on Roswell. He’s a terrific guy but then so are you. Love, Sheila [email 9/20/2o14] 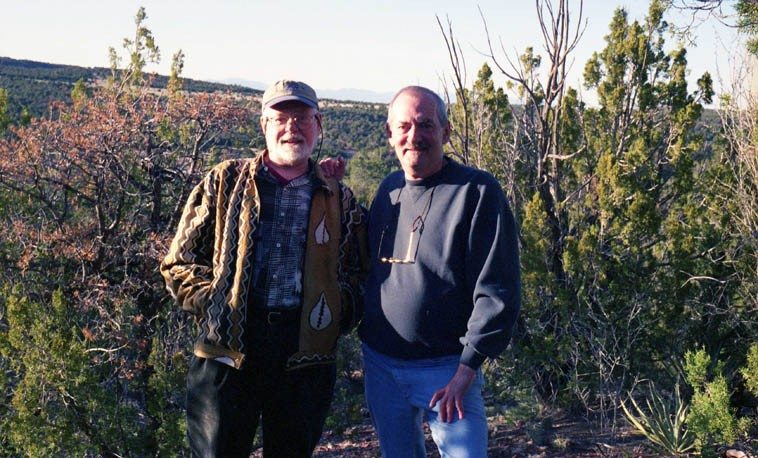 Roswell Rudd & Kenny Davern up at Kenny’s place in Sandia Park, New Mexico — March 29, 2004 — photo by Mark Weber —- I drove Roswell up there in my old truck on the other side of the mountains from Albquerque where Kenny & Elsa lived — we watched a video of KD’s favorite conductor Wilhelm Furtwangler and then went out to lunch

It is hard to believe that it is 50 years since I heard Roswell Rudd play on three LPs that turned my ears around: Four for Trane, with Archie Shepp; School Days, with Steve Lacy; and New York Art Quartet, with John Tchicai. Back then –1964– I was a young trombonist struggling with slide gymnastics to bebop along to recordings by J. J. Johnson and Curtis Fuller. Then I heard those three LPs in quick succession. Each unlocked revelations about a whole new instrument, a whole new set of voices, a whole new vocabulary for sliding in sound. Ever since I’ve listened to Roswell as often as I can: fifty years of inspiration, what a gift! ———-Steve Feld [email 9/20/2o14] 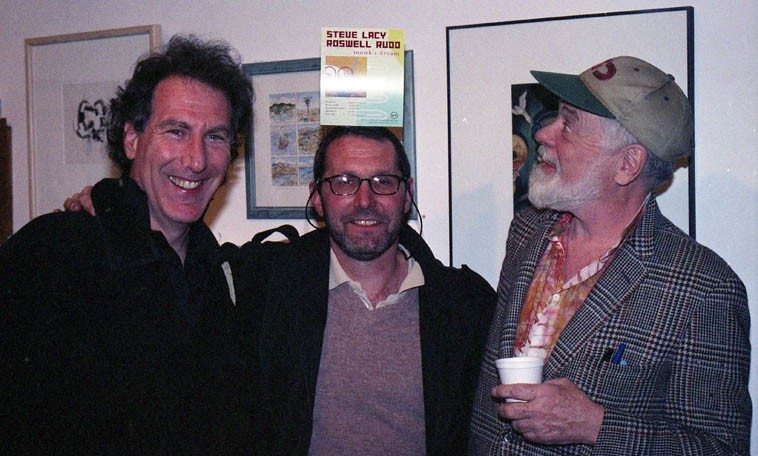 In the moment, going for it sort of player. Raw yet extremely musical, he plays with conviction/intent. —–Michael Vlatkovich [email 9/21/2o14] 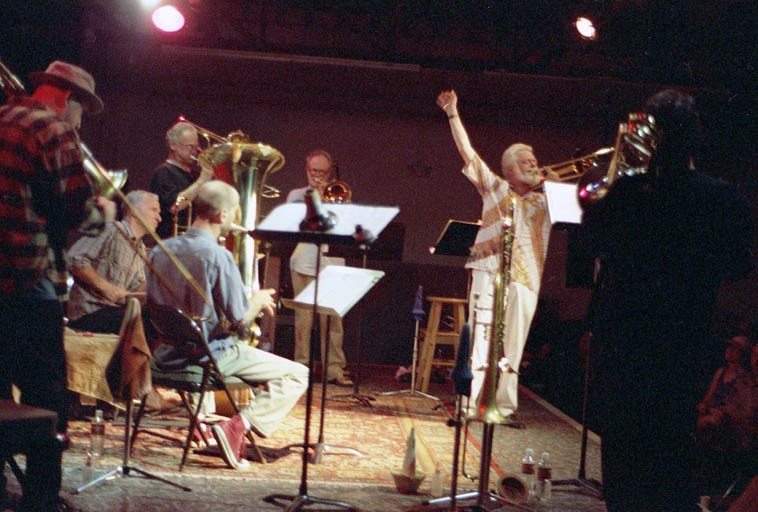 Roswell Rudd & Bonefied — May 22, 2000 at The Outpost Performance Space, Albuquerque — Bonefied was a New Mexico five-trombone ensemble created by Steven Feld and on this occasion they debuted Roswell’s extended work “Cry of the Petroglyphs” that he had sketched out after a previous visit to New Mexico when I had drove him over to the west side of town and showed him some of the 17,000+ ancient (circa 2000BP – 1300AD) petroglyphs — Left to Right: J.A. Deane (trombone), Jefferson Voohees (drumset), Gary Sherman (trombones), Mark Weaver (tuba & trombone), Kurt Heyl (trombone), Roswell Rudd (conductor), and from the rear: Steve Feld (trombone) — photograph by Mark Weber

EVERYWHERE 66′
This was the one that really turned my head around as to how one could navigate the bone. Hearing it now, I realize how much it informed my concepts with electronics. Roswell always finds the essence of the trombone. ——dino j.a. deane [email 9/22/2o14

We have a brass teapot
with a metal handle —-
After the whistle blows
you must never grab the teapot
…….without which you have oven mitts

Roswell has a brass trombone
with a long-arm slide —-
Once the music starts
you can never know which way
………………it’s going to go:
It’s like he’s trying to hold onto
………………a Hydra head of snakes 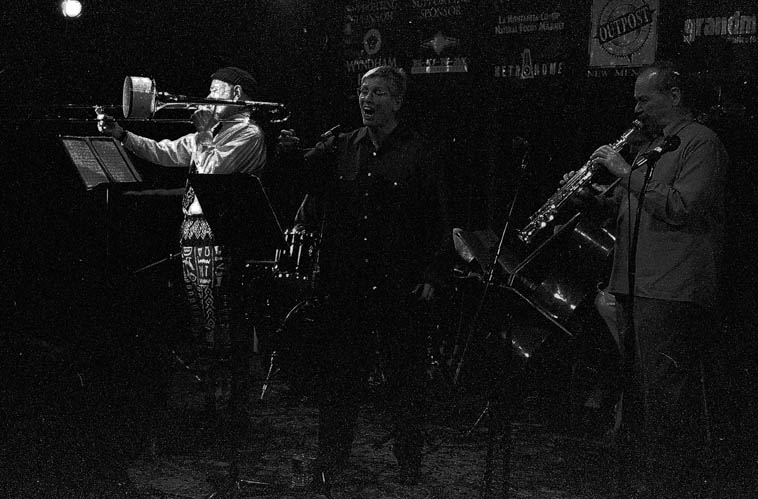 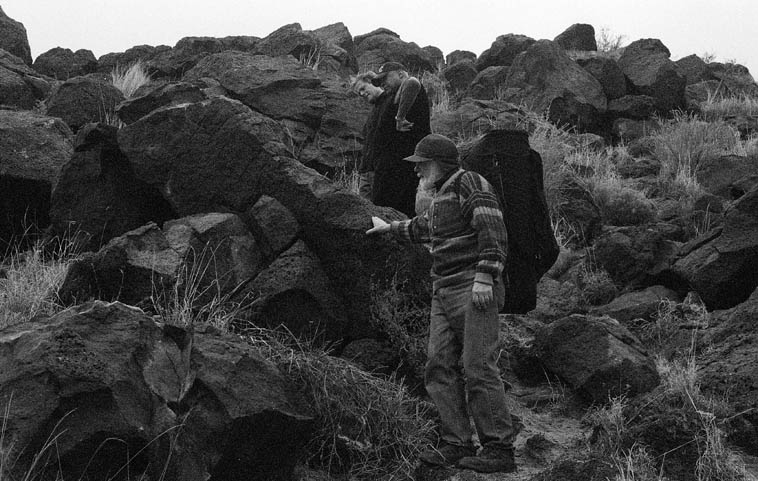 Roswell Rudd, JJ Avenel, John Betsch on our field trip —- March 20, 2000 — Piedras Marcadas, West Mesa, Albuquerque — photo by Mark Weber —– Roswell brought his trombone and at one point went off by himself to play to the petroglyphs and the old spirits (we could hear him up on the mesa) 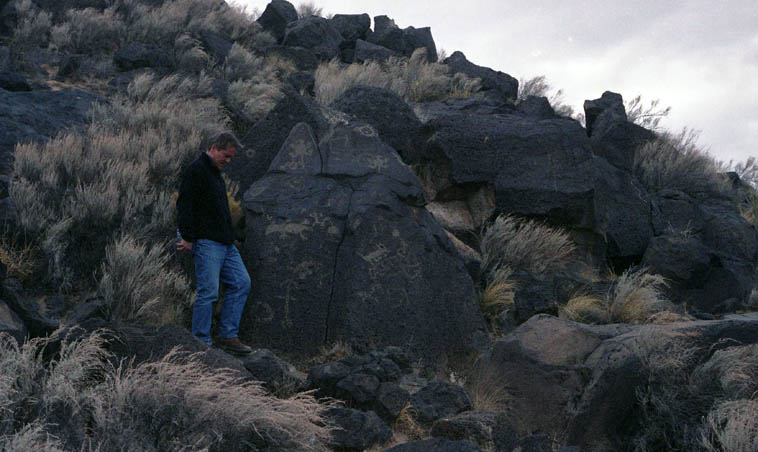 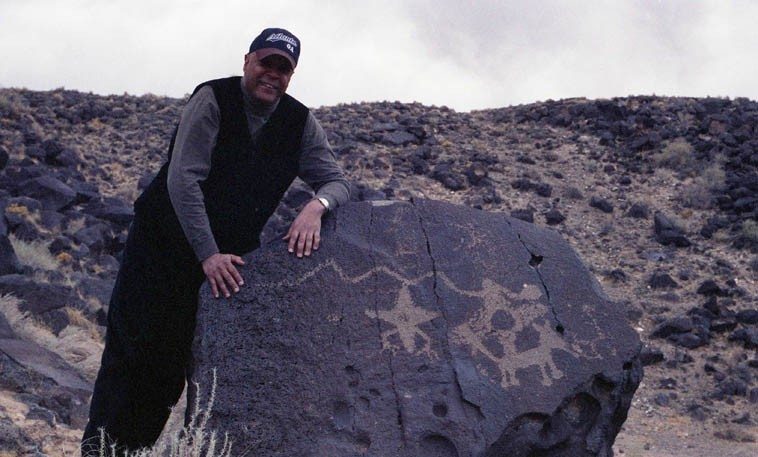 John Betsch with Star beings (only known to exist in Rio Grande Valley petroglyphs) and a migration symbol and a talking dog —— March 20, 2000 — photo by Mark Weber —- we were laughing because JJ had just seen his first cholla (cactus) and exclaimed “Sacrebleu! what’s this?” 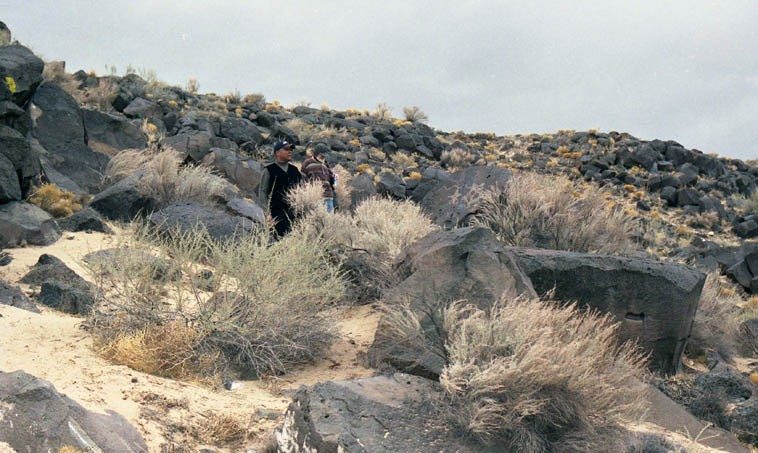 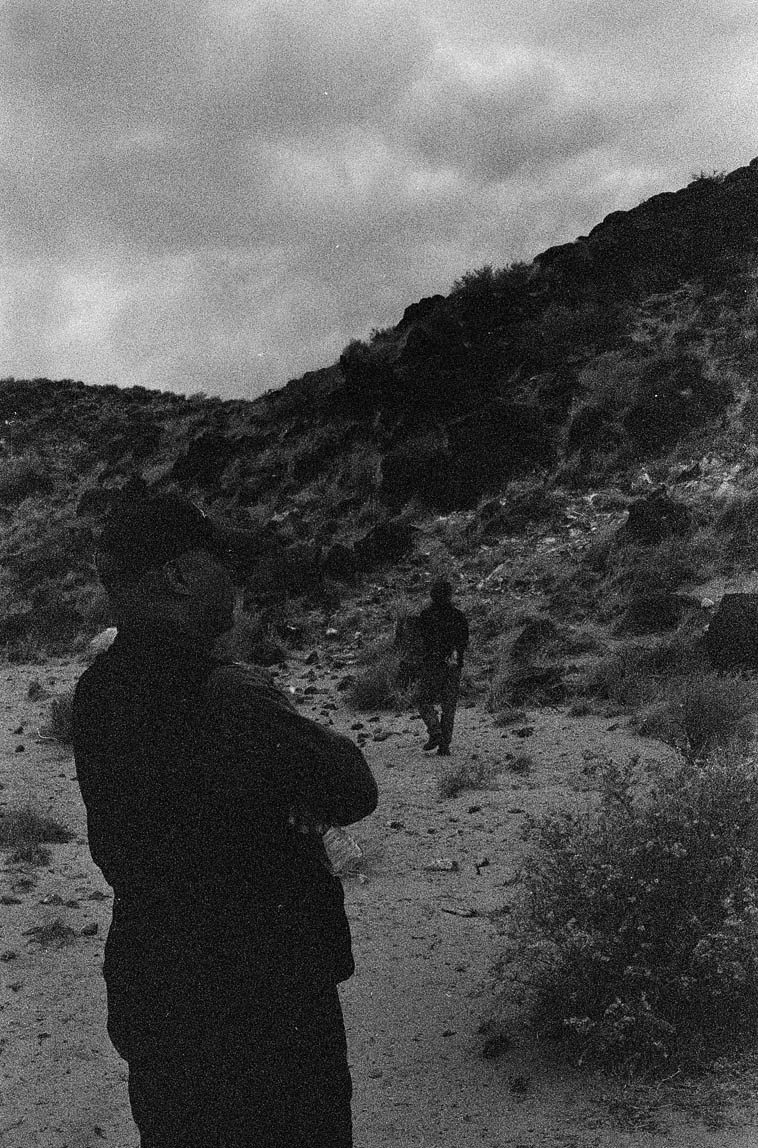 We’re listening to Roswell up on the mesa top playing his trombone to the petroglyphs — March 20, 2000 — photo by Mark Weber —– that’s John Betsch in foreground and JJ walking 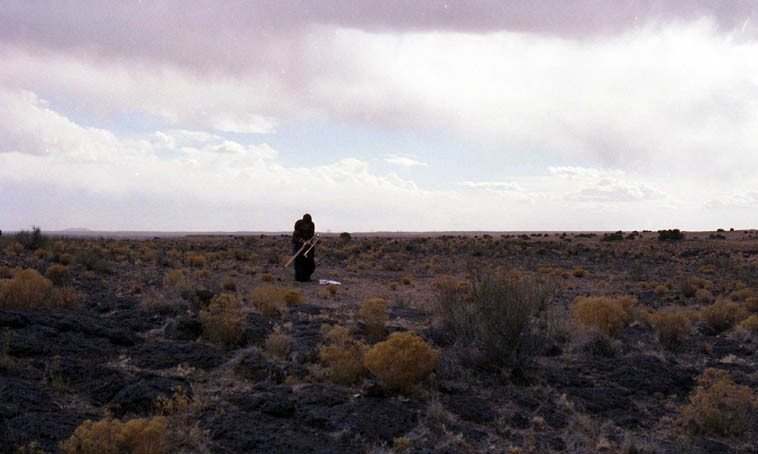