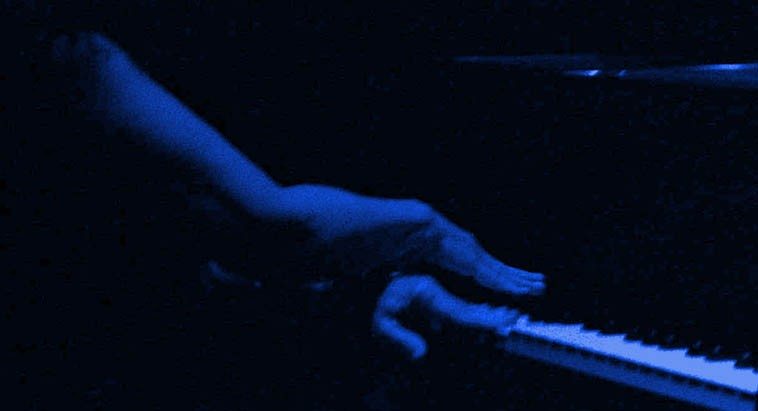 Connie Crothers has strong convictions. Add to that a sense of decency and general kindness and you have New York. She’s one of those persons who doesn’t keep a television, probably never has. Has every intention of getting it done, takes care of business, strong work ethic, moves things forward. She’ll wrestle you to the ground over differences of opinion (for years she does not agree with me that one of the central characteristics of jazz is theme & variations). She’s why I jump on an airplane anytime and every time she asks if I’ll join her for a set.

The Stone is volunteer run —- John Zorn books the shows, he called Connie to ask if she’d care to do a week-long Residency, six nights, two sets per night, with the stipulation that she play on every set —- seats about 70? I’m not sure, and with the SRO standing along the walls, it was almost a hundred attendees each night —- Connie not only has a devoted following but it appears people are becoming curious about who she is. 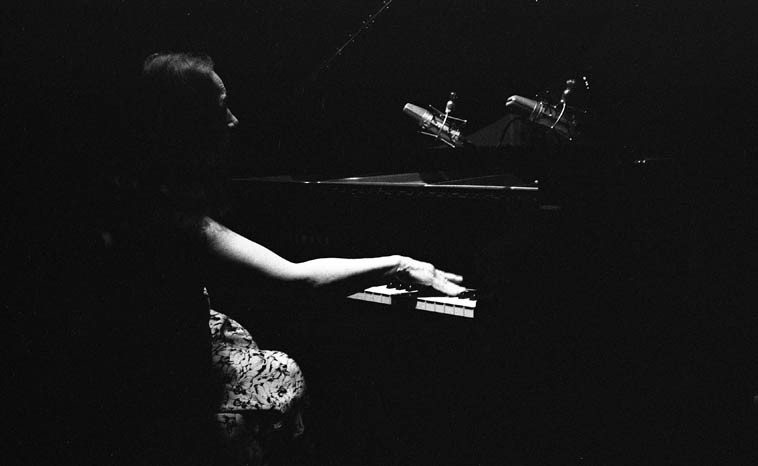 Connie at the Piano

….prism, prismatic
phrases broken loose from the song
….block chords laid in, then abruptly
……..dampen’d with pedal where a long
…………..single-line in right hand (or left)
…………………..emerges, emanates, dissappears into
…………………………clusters and swipes that
……………………………….build up into more block chords
…………………………………….more splashes, more
…………………………corruscating lines
…………………………swirling elongated
elaborate, lyrical, pushing their way out
of the thunder of continuous block chords
torrents, rocking the piano, Connie rocking
and swaying flowing with the tumult
completely at ease with such swirling energy
pouring on more and more . . . . 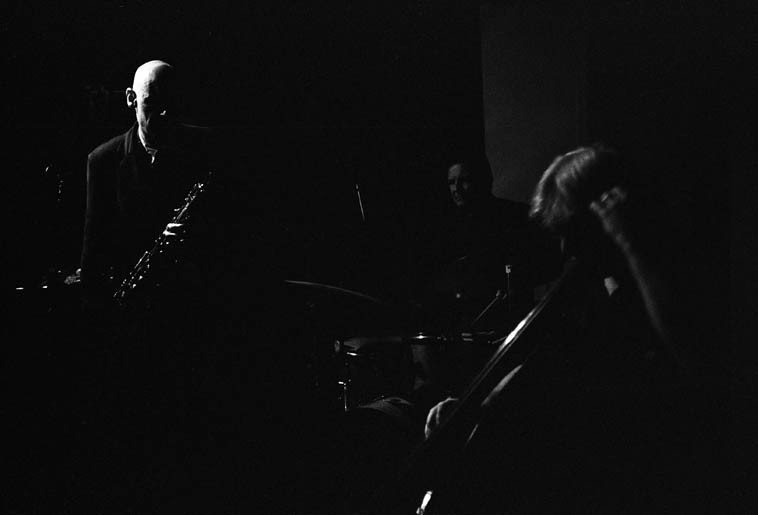 We were walking down Amsterdam Avenue
heading toward a Mexican seafood restaurant
………….that Carol suggested (she and Virg and Eva would
meet us there)
it was our post-jam-session food thing
with just enough time to eat and make it to The Stone
to catch Connie’s second night of her six-night residency.

Someone asked why these digital cameras nonsensically
still make that shutter noise (curtains, mirror, shutter) that
the old SLR cameras made?

Asking the immortal question: Why can’t they just be quiet?

And without missing a beat, Will Jhun said, “Oh, that’s a feature.”

Yes, in the future we’ll have to buy Quiet.

I remember I was living in San Francisco in the mid-70s when
I spied my first bottled water for sale (Calistoga)
I laughed (everybody in Frisco was broke in those days
who could afford water?) at the same time
I was mystified —— why pay for something that
you can get out of the tap?

Little did I know, grasshopper.

Now they say there’s a dumping
ground in the Pacific Ocean the size of Texas full of empty
plastic water bottles.

Judging by how noisy things have gotten in general
they’ll probably have to shoot you into outer space
(for a price) to get that Quiet. 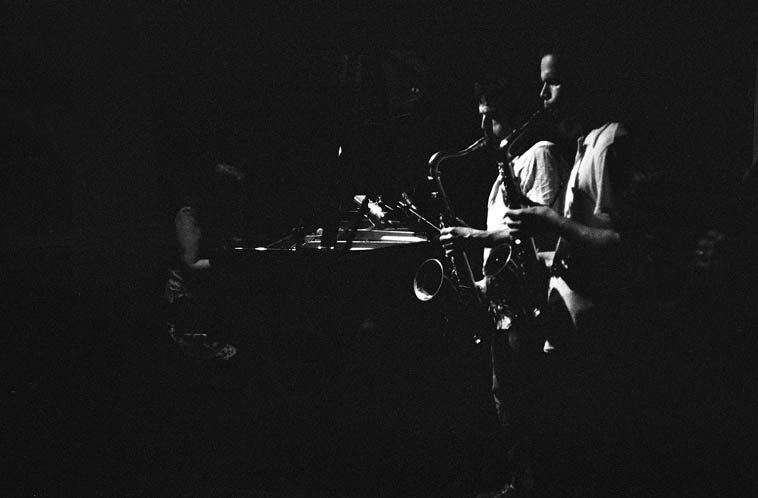 Quintet with Nick Lyons, alto, and Lorenzo Sanguedolce, tenor; Pete Swanson, bass; Todd Capp, drums; Connie Crothers, piano —- August 19, 2o14 — all spontaneous music, CC would merely say before a piece “ballad,” or “mid-tempo,” or nothing, and the only composition they played, my favorite “Ontology,” and I believe the blues they played was a CC original —- for the horns to play this well they have to trust each other, during counterpoint you cannot second-guess your partner, you have to steam ahead, their first notes played simultaneously were amazing, and it just rolled out after that like hot butter — photo by Mark Weber

pondering the air
pondering the southern migration that is soon to come
riding the upper currents following the Rio
while 347 saxophonists play for them
while the drummers take the ride cymbal eternal
these luminous-winged hummingbirds
……full of sugar and nectar energy
take another chorus, circle and dodge
and are gone: Gone With the Wind 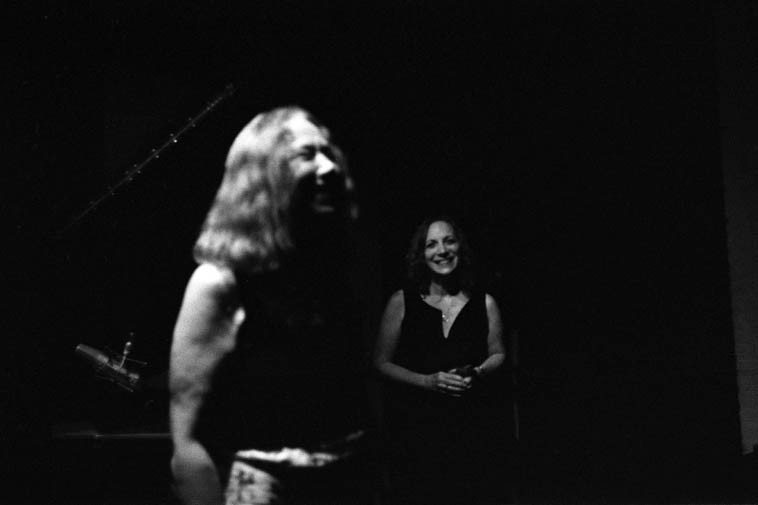 TranceFormation —– after the set —- Ken Filiano, bass; Andrea Wolper, vocal; Connie Crothers, piano — August 19, 2o14 at The Stone — photo by Mark Weber —- Where does the spirit of music come from? This trio ventures back to the source and dives in —- entirely spontaneous, always chimerical, like eavesdropping on the subconscious, rayjoolagator yaydown electrum fosh iglee, into unknown territory, wide-open at the same time micro-faceted 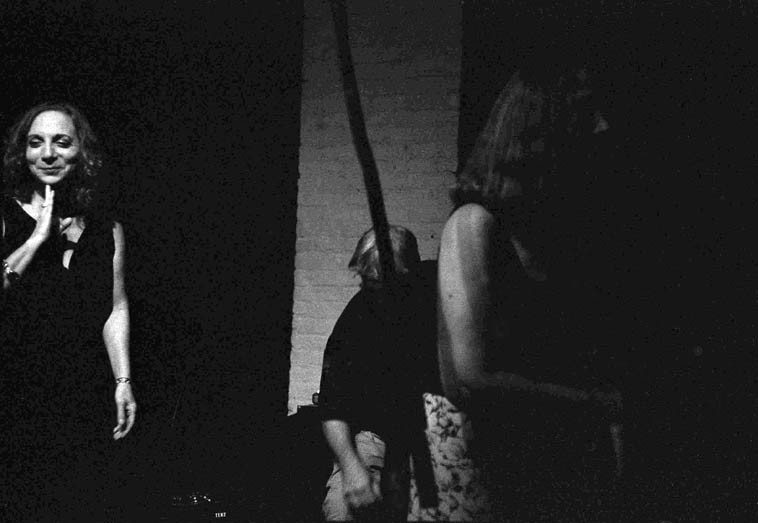 TranceFormation ——– after the set ——- August 19, 2o14 ——- photo by Mark Weber —- It’s dark inside the Stone, takes a few minutes for your eyes to adjust —- I’m shooting Tri-X with my antique cameras, one is an SLR (Fujica ST-701) and the other is a rangefinder (Olympus 35-RC) two phenomenal cameras from 1976/1974 —- this trio was the first set of 12 sets total over six nights of Connie in a variety contrasts 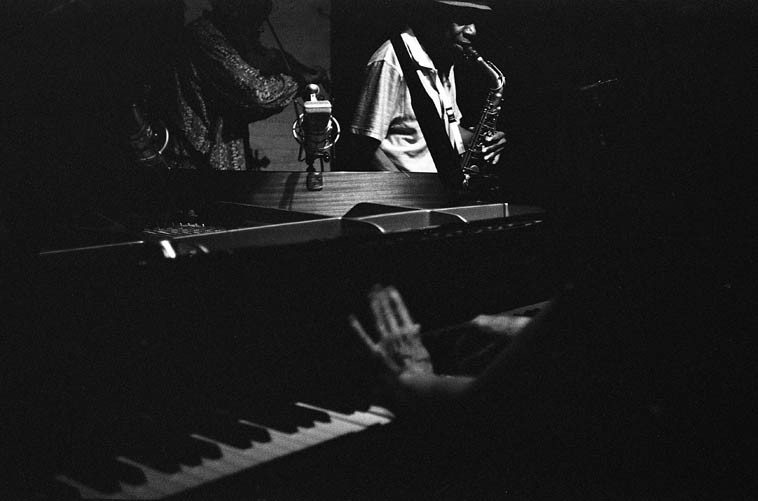 Trio on second night, first set: Connie Crothers, piano; Henry Grimes, bass & violin; Jameel Moondoc, alto saxophone —— August 20, 2o14 —- photo by Mark Weber —- Henry’s ability to walk outside changes is astounding —- they played one long improvisation, at least, I don’t remember them stopping, we’ll have to see what the recording reveals —– Henry only broke into walking a couple times during the set, but when he did and knocked out those little skipping triplets to kick it along, it just slayed us, he floats in and out of time (I asked Bobby Bradford if triplets was best way to describe this thing and he said yes, but if you wrote the 3 notes on a beam you’d erase the middle one). 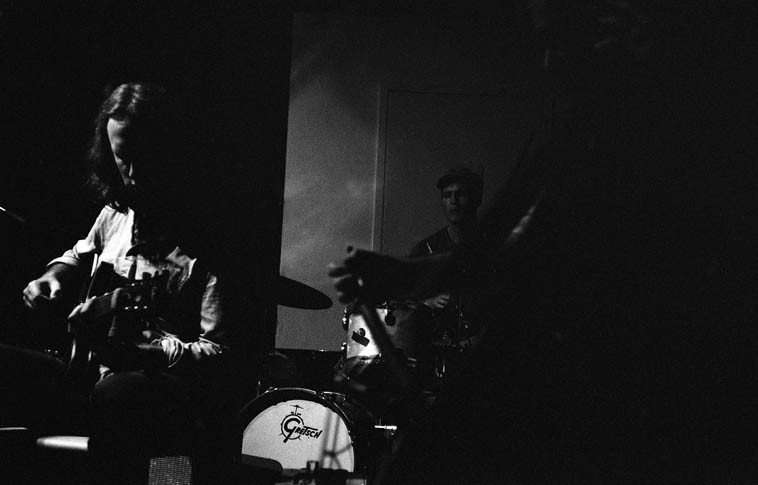 Adam Caine, guitar; Federico Ughi, drumset; Ken Filiano, bass; with Connie at piano —- August 20, 2o14 on the second night of the Residency —- photo by Mark Weber —- (I called Ken “the secret hero of these sessions” —- Richard Tabnik calls him “Dr Exactly” because of his proclivity to underscore something you’ve just said by saying “Exactly!”) 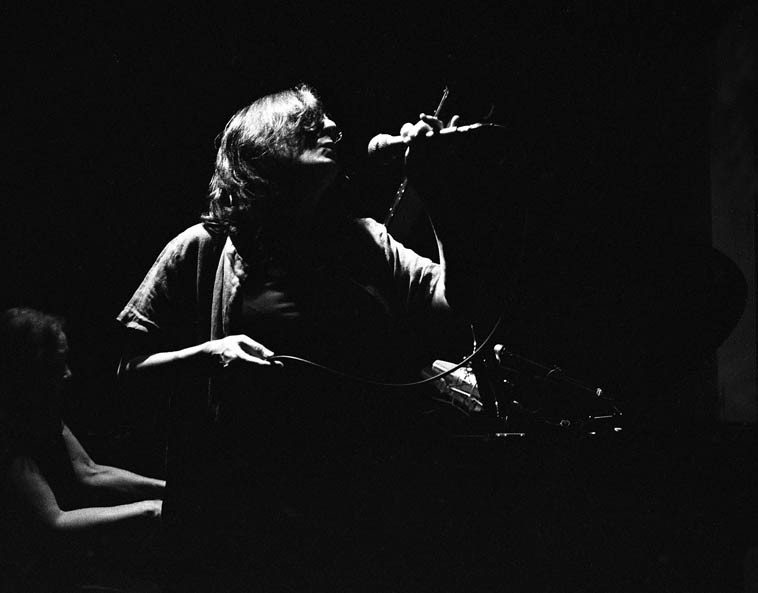 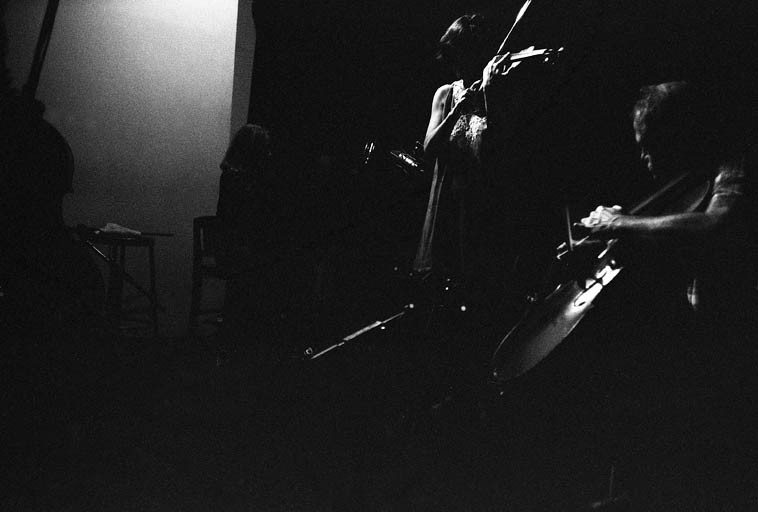 The intensity during this set was off the map —- a string quartet: Eva Lindal, violin; Tomas Ulrich, cello; Michael Bisio, bass; Connie Crothers, piano —- originally, clarinetist Bill Payne was to join this set but that would have pushed us over the top, Bill was stuck in Vegas —- Eva’s concentration puts me to shame, I only wish I could concentrate half as much as she does —- this music was beyond possibilities, the intensity (psychic intensity, not histrionic loud intensity) it showed all the possibilities available in free improvisation — they did one long piece — August 22, 2o14 — photo by Mark Weber 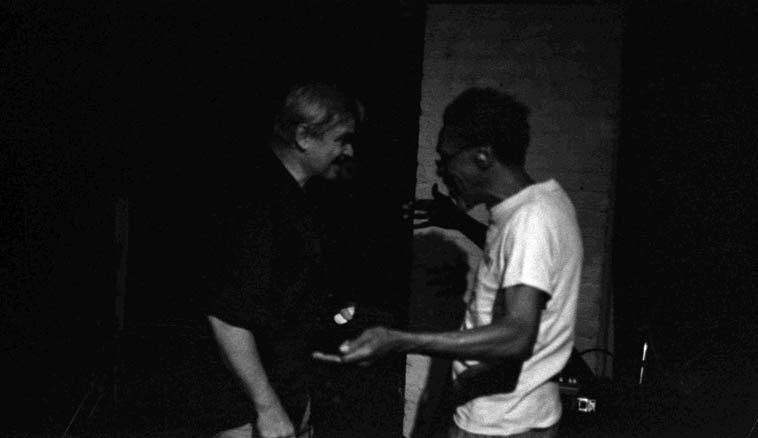 Ken Filiano and saxophonist Will Connell after the TranceFormation set —- August 19, 2o14 — photo by Mark Weber 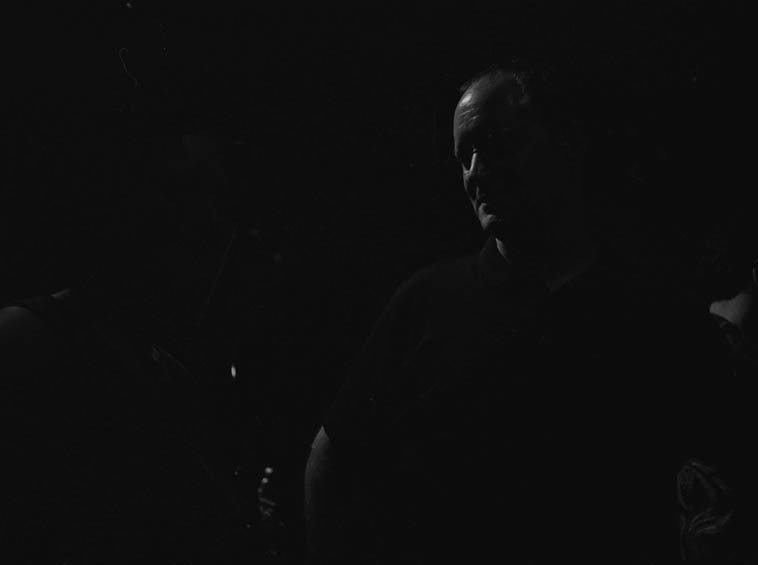 Scott Friedlander, stage manager for The Stone, and photographer extraordinaire —- August 24, 2o14 —- I think we were wrapping up, after the last set of Connie’s Residency — photo by Mark Weber 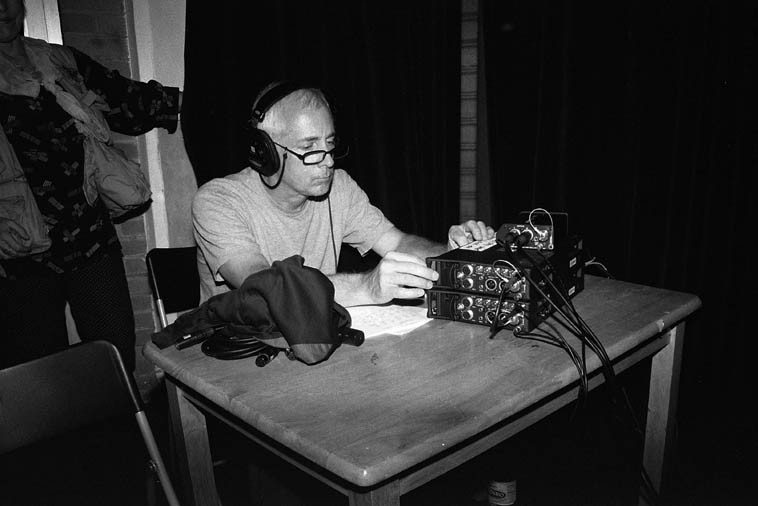 Ben Manley, recording engineer — (August 20, 2o14) —- in this spot by the front door every night of Connie’s Residency doing the valuable work of catching the sounds for the sonic archives — photo by Mark Weber (I flashed him because it was way dark where he was working) 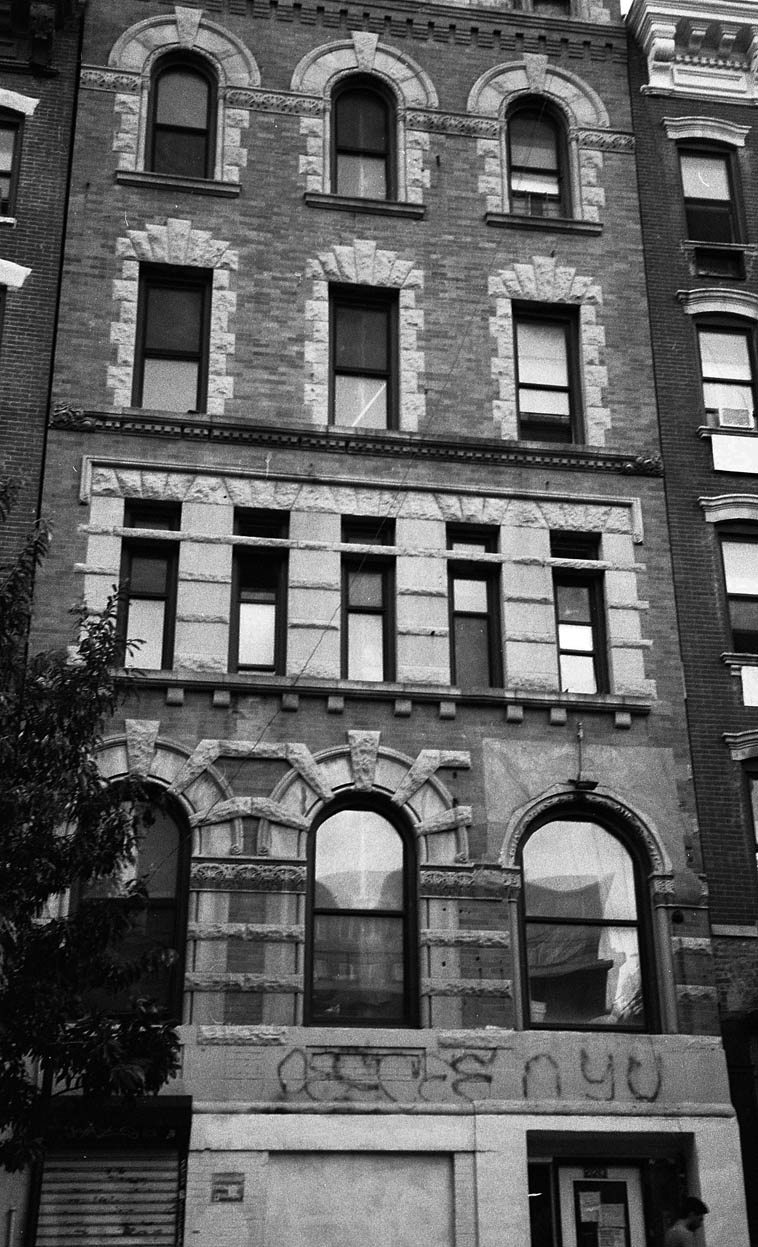 By chance, Peter Ind’s recording studio-loft (1960) is only a half block away from The Stone —- The Stone is on 2nd Street at Avenue C on the Lower East Side ——– the studio where Peter Ind recorded many sessions with Lee Konitz; Sheila Jordan’s first recording session; and Warne Marsh’s immortal albums RELEASE RECORD, SEND TAPE and MORE JAZZ FROM THE EAST VILLAGE is top floor of 223 E. 2nd Street between Avenues B and C, directly across the street from FDNY Engine Company 28 — photo by Mark Weber — August 19, 2o14