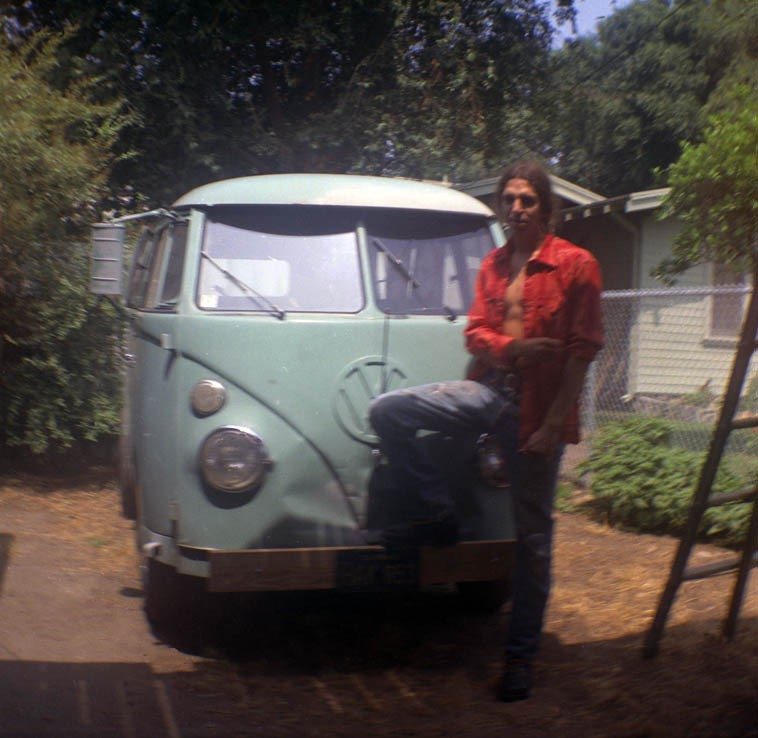 We jacked up the Karmann Ghia
but forgot to block the rear tires
so that after we got the flat off,
of course, parked in the grass
it just slumped over, bent hell
out of the jack mount —-

Do you remember how cosmically funny everything was
when you were on LSD?

Near midnight and the world had a glow
the beautiful Shane in a gossamer muslin paisley dress
long iridescent dark hair flowing to mid-thigh
quietly staring at the sky, says something
about how the moon abides . . . .

Jacked that Ghia up a second time, but
damned if we didn’t forget AGAIN to block the tires
and down it went, axle to the grass, all over like a rerun ———

That called for a fresh round of beers.
And a doobie.

Luckily, there were six or seven of us stoners hanging around
who could lift the Ghia while someone shoved a block
of wood under it, providing nobody started laughing,
which
was impossible —-
interconnecting gears, cellular reincarnations, whirling
lug wrench mandala, atomized lug nuts, disintegrating
pulsing purest weight of this car whose metal was once
500 miles into the center of the Earth —–
I can’t imagine anyone was going anywhere —-
telepathic awareness:
someone had merely noticed that Tuna’s Ghia had a flat,
marooned on a sea of grass,
so, we were pitching in to help, such as it was, stoned
to the gills, infinitesimal, embryonic, liquid, lifting and hoisting,
Then somebody’d yell, “What the fuck, there’s spiders
all over this spare! And why is that one staring at me!”
and we’d fall out, all over again ——

Reminds me of the time Kurt bought a letterpress and these
things are huge, made out of iron —
we took the mattress out of
my VW van and went out to this old farmer’s place
to fetch the thing, two carloads of us longhairs stoned on LSD and
wine —-
we got the giant side wheel off, then started to drag this monster
out of the barn, but, when we pulled it away from the barn wall,
the barn started to list and we all ran outside and
damned if that barn didn’t fall over —-

That letterpress had been holding the barn up!

The farmer looked aggrieved and said, “Gee, if I knew that
was gonna happen I wouldnta sold it to yew”
We were barely keeping our composure, little splurps of laughter
escaping from our clenched lips, until one of us jokers
broke loose, and we were howling, so that we’d have to take turns
consoling the farmer while endeavoring to keep a straight face
as he yammer’d about the mess, “Golly, what am I gonna do, that’s
my barn?”
Which would engender another burst of laughter, holding our
stomachs, truly feeling sorry for the farmer, but gawd damn this
is funny, we’d be hiding behind the van trying to get control
of ourselves, JW was having a spasm, and Borego was wheezing,
I’d be gathering myself together so I could go relieve B.Rian (aka Brian, my
little brother) who was explaining to the farmer that
the foundation timbers must have rotted, and I’d lose it, again, and
have to retreat back behind the van where Kurt was gasping for air, we
could hear Johnny say, “Wow, man, sorry about your barn,”
which only made matters worse, only to be topped
by the hapless farmer saying, “Maybe you boys could come back someday
and help me stand my barn?”
Is he serious? Us?
What’s he smokin’?
Can we have some?

Alas,
we got what we came for,
loaded up, apologized one more time, even if it wasn’t exactly
any fault of ours, so much is fate
so much is change
this cosmic barn gone in the ever-crumbling cosmic scheme of things 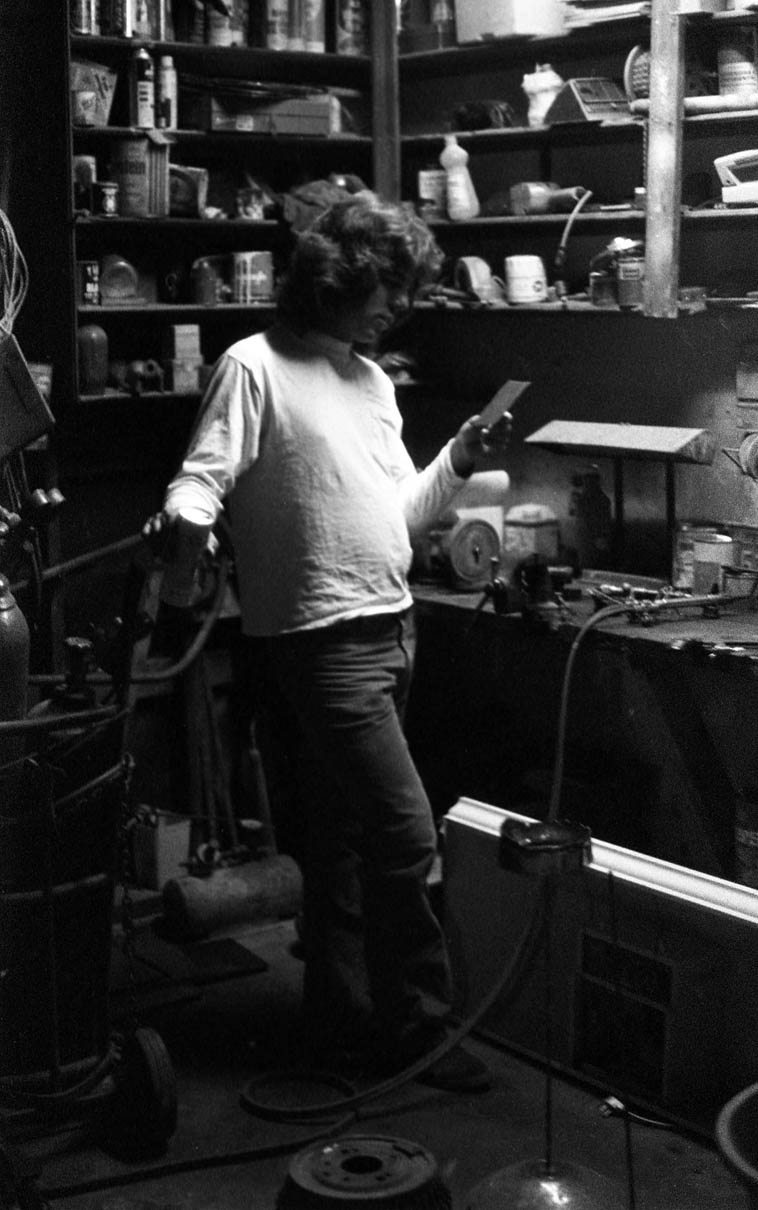 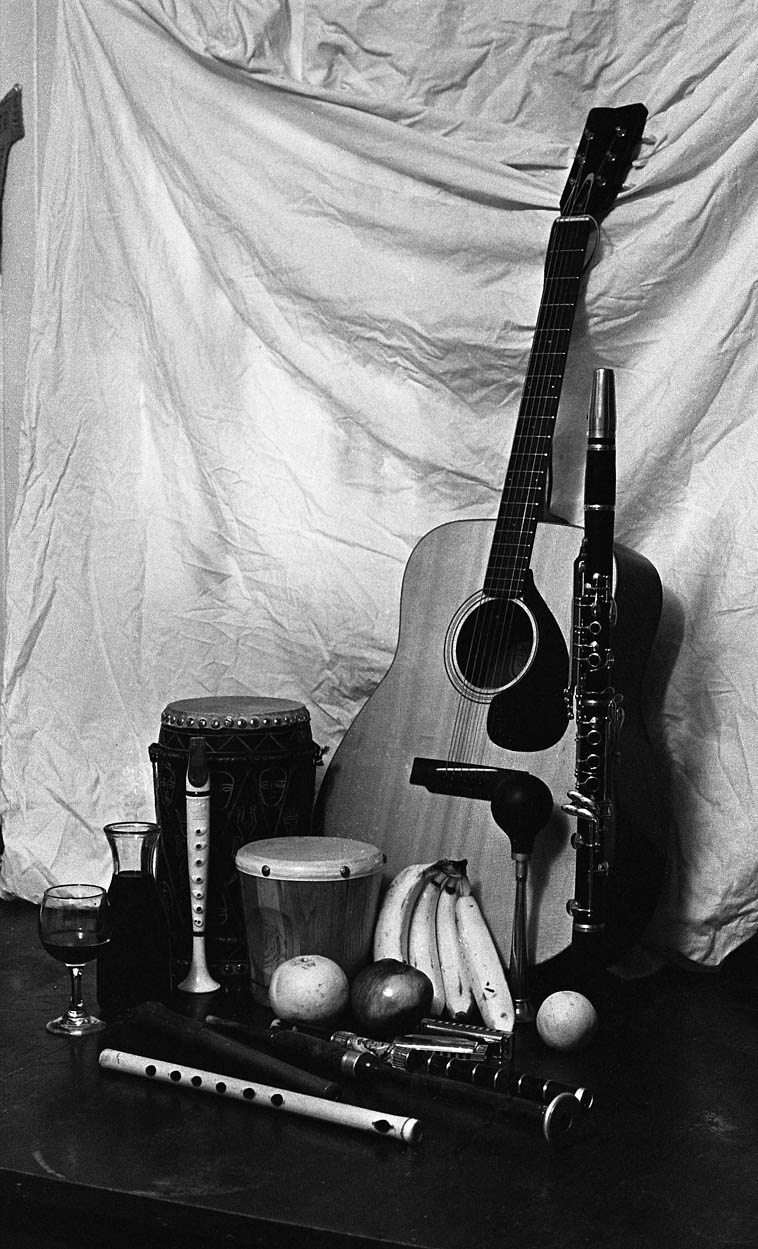 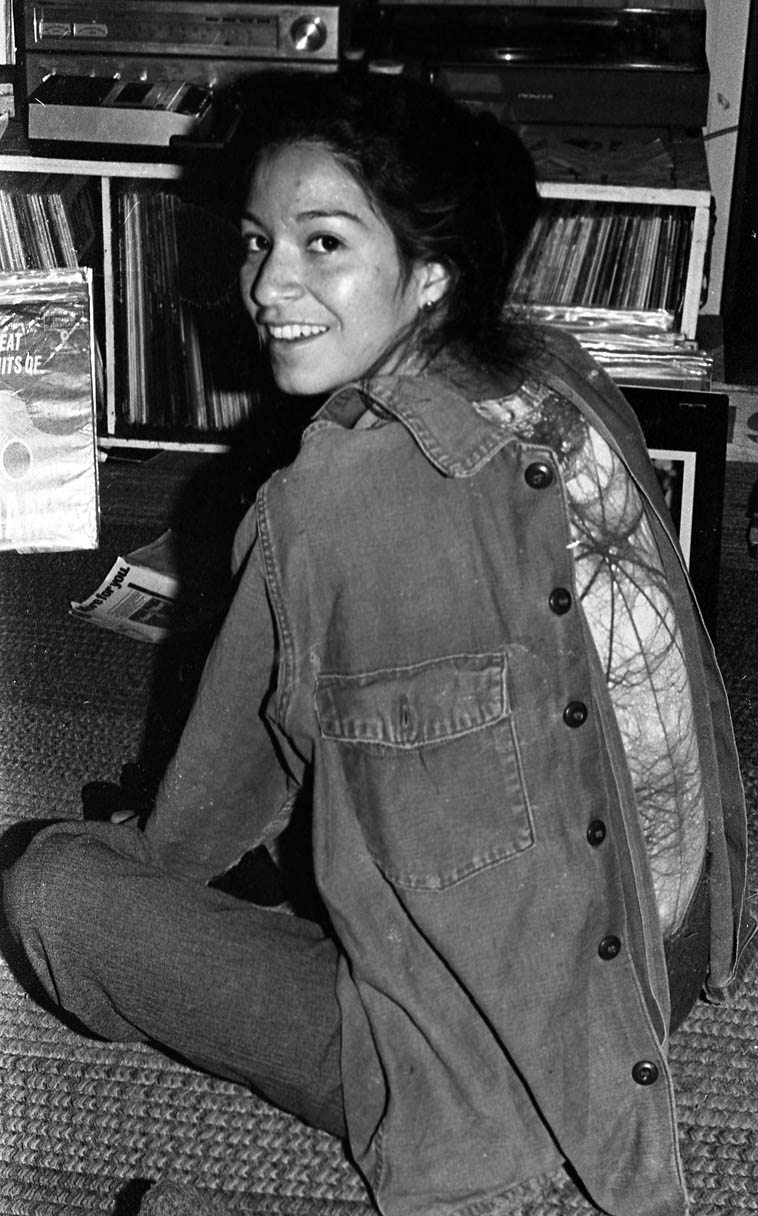 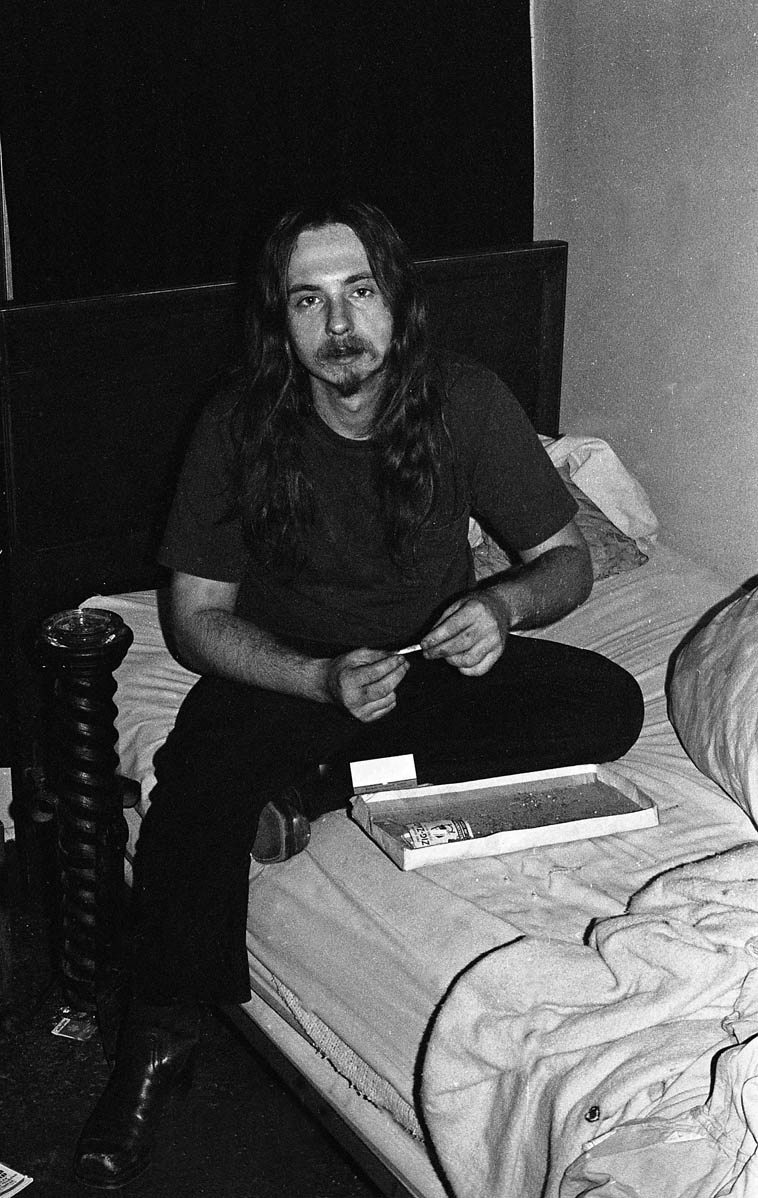 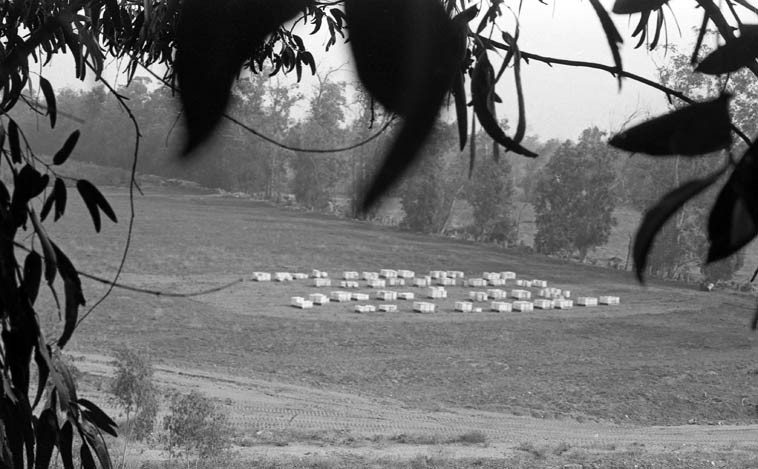 Bee farm in Alta Loma, California (since incorporated into Rancho Cucamonga) — this is the landscape in which that fallen barn was located: citrus groves surrounded by columns of eucalyptus trees from Australia planted to act as wind screens against the Santa Ana Winds —- 1977 probably October —- photo by Mark Weber 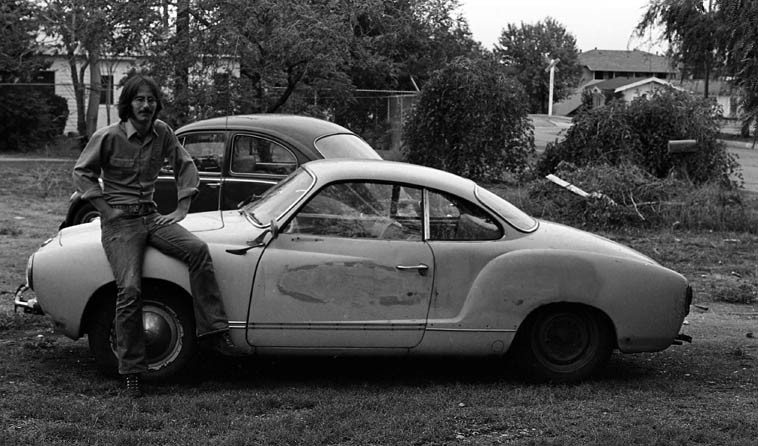 Brad Fisher (1952 – 2009)(aka “Tuna” because canned tuna fish was only 30 cents in the early 70s and so Brad ate a lot of tuna) —- you might think I wrote this poem after looking at this photo, but I didn’t even remember this photo until a minute ago —- gave me goosebumps when I came across it, because that is exact spot where we were jacking up this Karmann Ghia there at Brad’s place, around the corner from my old digs —– photo by Mark Weber —- 1976, Upland, California