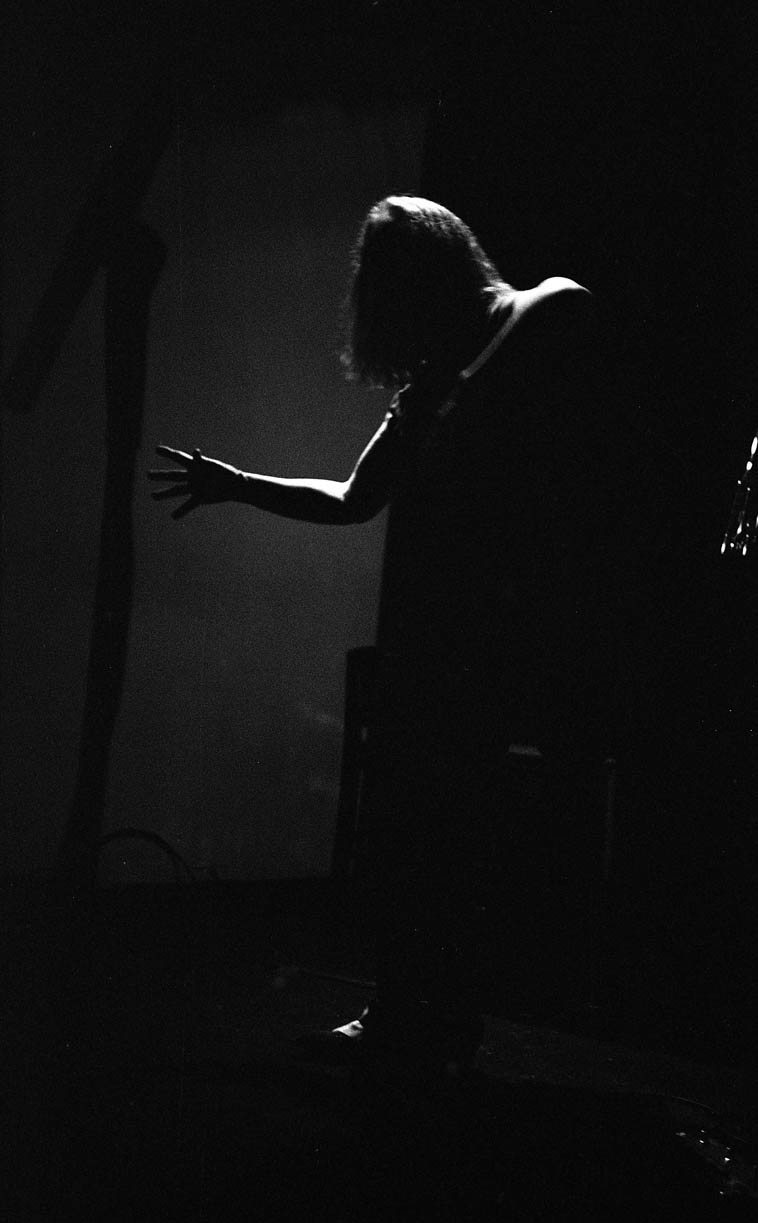 The music just came up through her like a geyser and the next thing she knew she was dancing — surprised us, too — Connie Crothers — August 20, 2o14 — photo by Mark Weber

” . . . a story in which the deepest wellspring of desire
is for redemption of that which has been lost, both to
memory and to life . . .”

as if in a dream
we pass through
hallowed
inundated
harbored and launched
which stars will guide us, which
will not?
hallowed sorrow and loss
launched, push off from shore
so heroic we continue

There is so much to learn about the world
and still we know so little, or too much, or
not enough 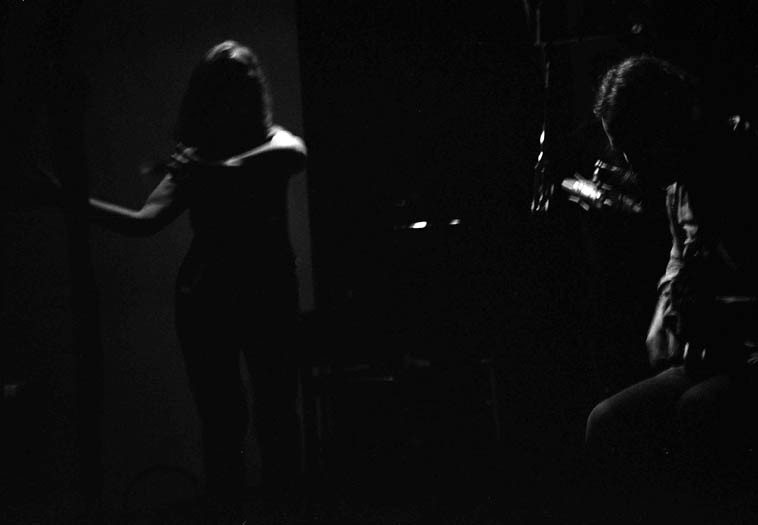 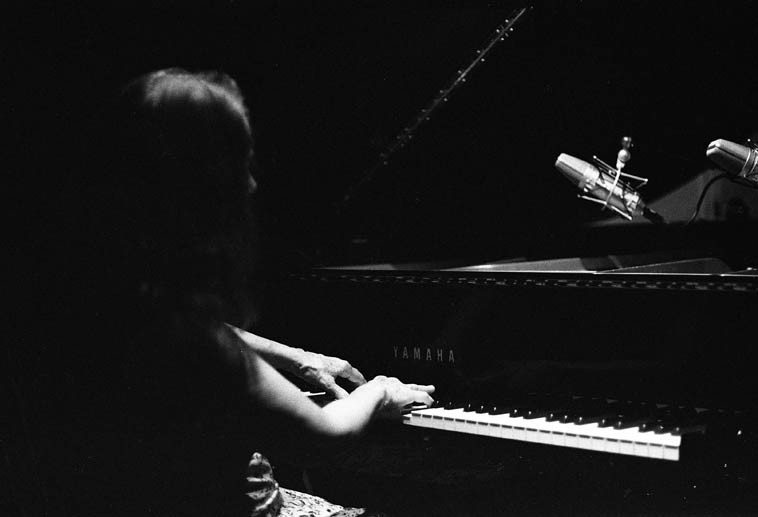 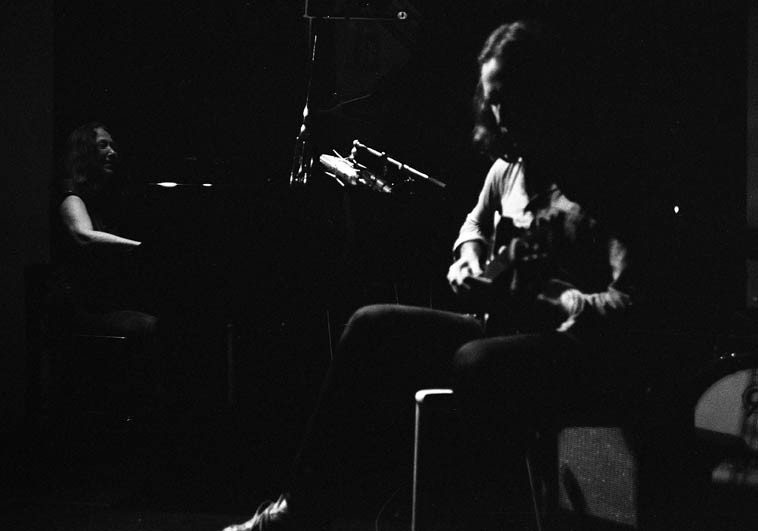 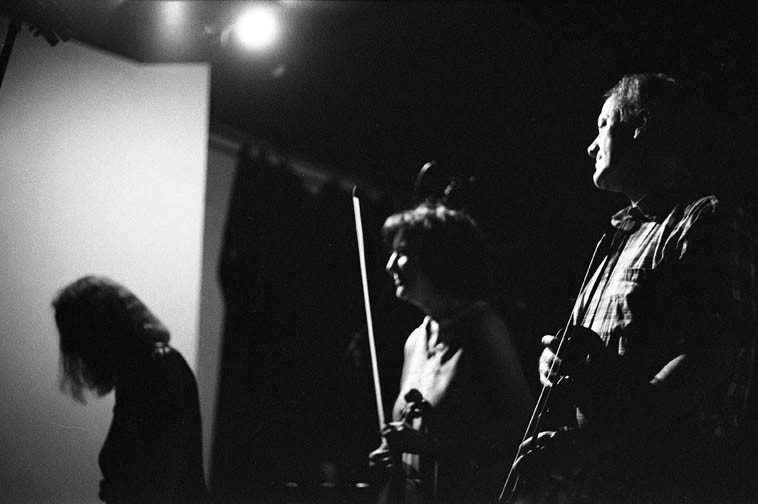 Always something more than music is involved —- Connie with Eva Lindal and Tomas Ulrich — August 22, 2o14 — photo by Mark Weber 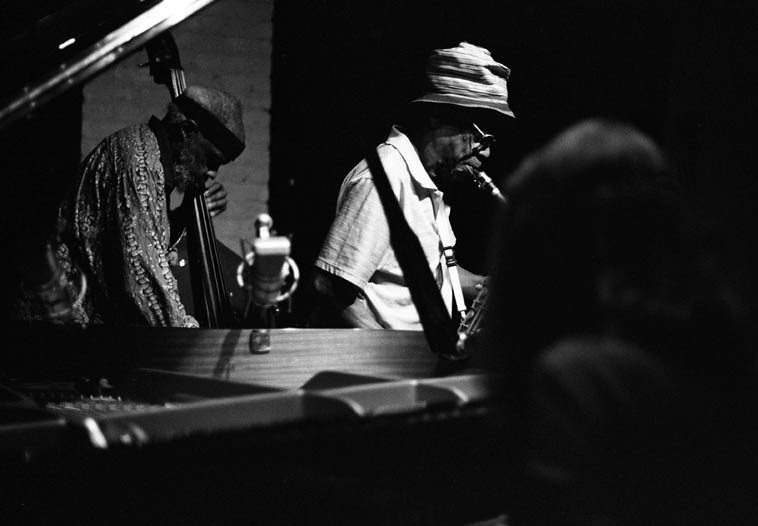 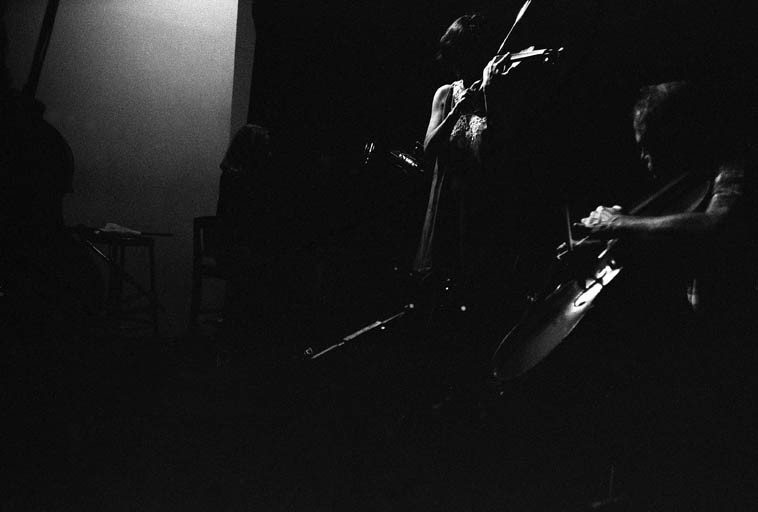 Connie Crothers String Quartet — August 22, 2o14 — Michael Bisio, bass; Eva Lindal, violin; Tomas Ulrich, cello — photo by Mark Weber — two hundred years ago on this spot horses were stabled, four hundred years ago a beaver dam, in the 1980s this room was a Chinese kitchen, during the third week of August twenty-fourteen all of these past shadows were swirling forth in music

NICK LYON’S GREAT UNCLE: I remember Nick mentioning something about a relative who wrote My Old Flame, so I asked, here’s his response:

Sam Coslow — my maternal grandmother’s brother… So, great uncle. Died before I was born. Co-wrote with Arthur Johnston My Old Flame and Cocktails for Two among others. He wrote or co-wrote that song “everybody needs somebody sometimes…” . . . His sister Judy Lieb died at 99 years old two years ago. She lived in Santa Fe after leaving 77th street and Riverside Drive in I think 1995 or 6. I miss her! I am in contact with his daughter Jackie. She comes to hear me play when she’s in NYC. Flipped over hearing Harvey Diamond. Her husband was Ted Sorel, an actor who played some red slimy villain on an episode of Star Trek deep space nine .. Had a lot of small television and film roles. Jackie told me Sam and Arthur co-wrote both music and lyrics.

NICK LYONS RESPONSE to a little thing I wrote at the KUNM-FM website for a radio show in early October. This is what I wrote:

In hindsight, evolution may not be the best word to describe jazz’s thus far 120-year journey, simply because all of the central tenets of jazz have been in place since the beginning (ie. swing, rhythmic variety, fun, spontaneity, theme & variations improvisations, in-the-moment reflection of society). The ideas inherent in jazz have always implied everything that was yet to be explored and discovered, we just needed the time to get to it all. To use the word “evolution” tends to imply advancements, improvements, new levels of complexity, armored sophistication. Not that jazz didn’t have a few wrinkles to iron out over the years.

It is interesting to note that the technology of the phonograph and jazz came into being concomitantly. Records have played a big part in the jazz life, which brings us to the matter at hand: Spinning records on the radio airwaves
of New Mexico! Even as jazz is essentially a live music, still, a lot of it has made it to record, lucky for us.

nice.. here’s my too sense: forgive me if it’s heady .. I’m heady and not all that grounded.. time to get out to the park…

evolution means principle functions of life being expressed in new dimensions.. accentuating new and different balances of elements and functions in the name of survival.. the new balance all of a sudden creating ground conditions for new forms to emerge.. taking on lives of their own.. always also connecting to the original forms from which they emerged

one could base an entire way of playing music on a single charlie parker solo, a single lester young solo, a single lennie tristano, connie crothers, richard tabnik solo… studying the phrases, the form, creating organic variations and permutations on every melody .. every nuance in phrasing..

advancements circling around a common core .. spiraling not linear. linear progression may be too solitary to be conducive to survival.. 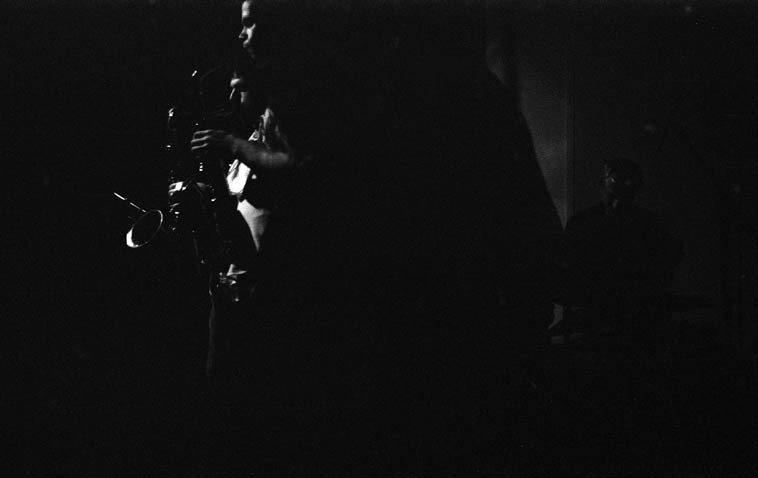 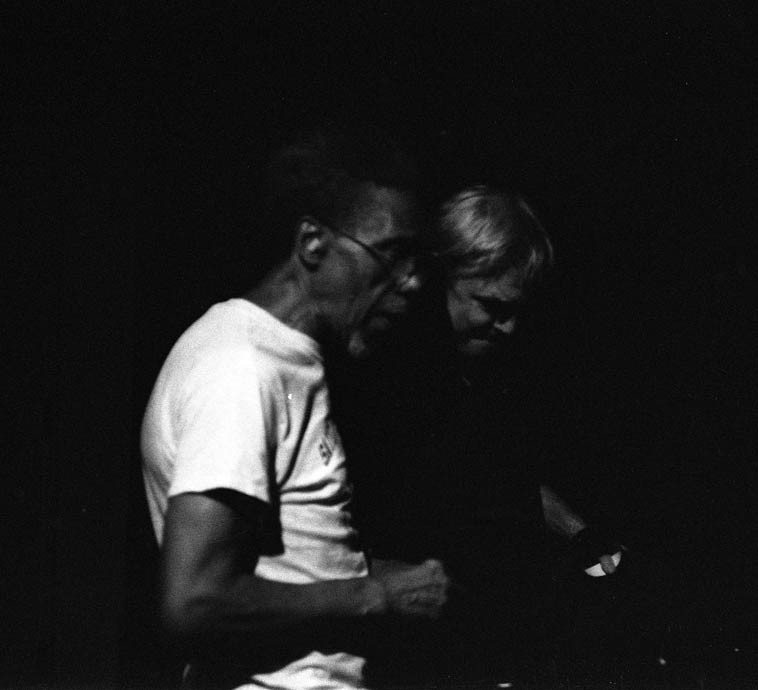 Will Connell and Ken Filiano (Ken is packing his bass after the set) — August 19, 2o14 — photo by Mark Weber 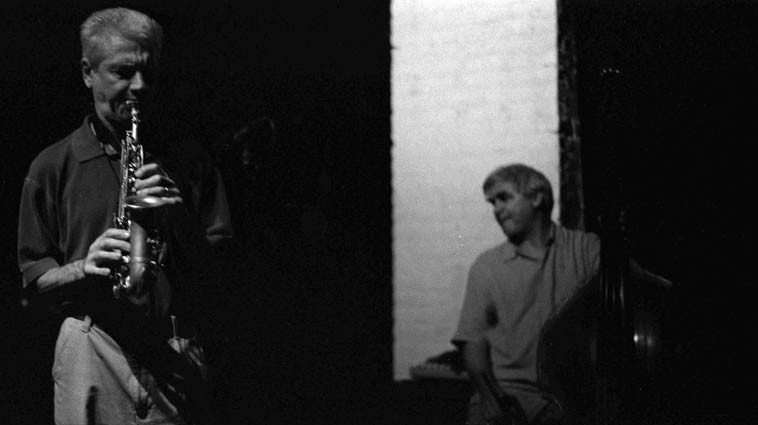 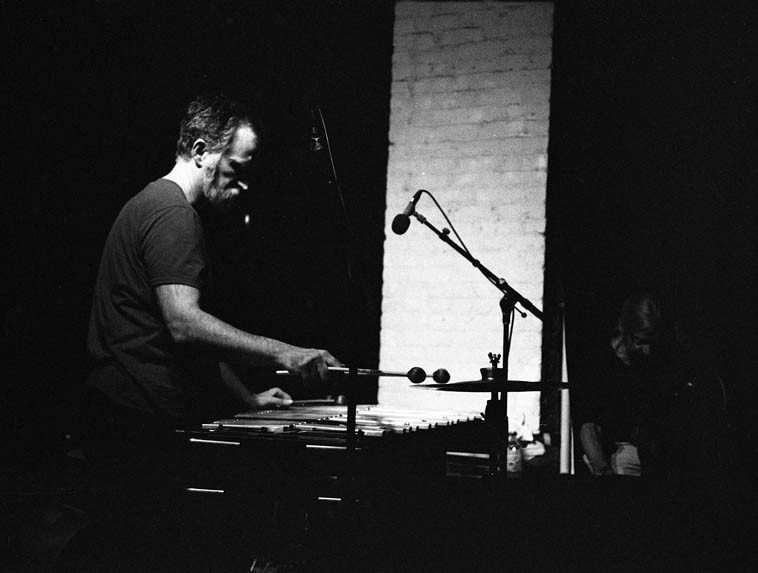 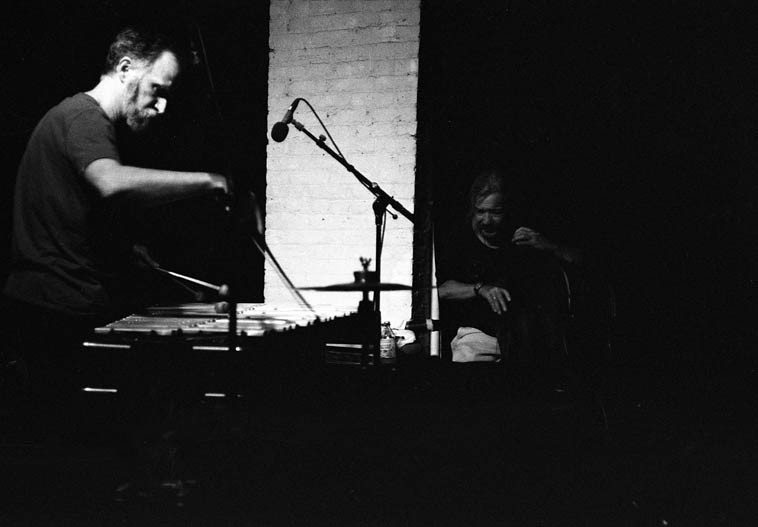 Kevin Norton bowing one of the vibraphone bars with Ed Schuller counting the ways — August 22, 2014 — photo by Mark Weber 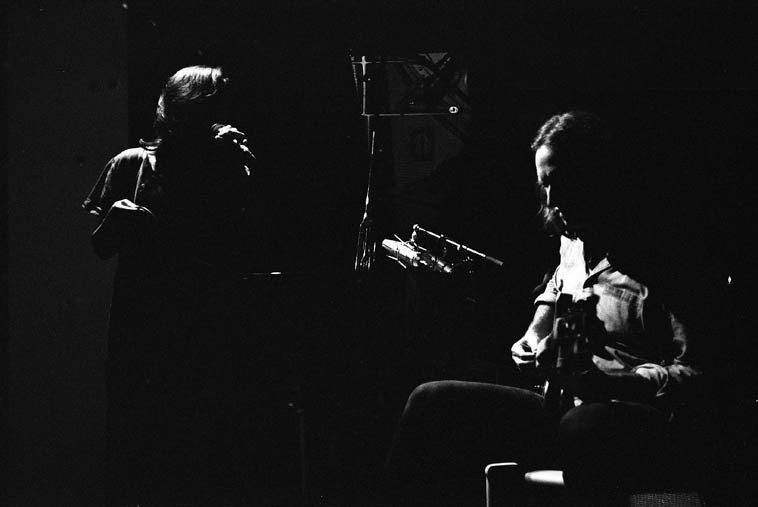