What is this obsession with music? Why have I preoccupied myself so much with it over the course of my life? It’s not that I don’t have other interests, but it all circles back to music, and meaning in sound.

I was running these thoughts past Bradford one evening and he said the most clear-headed thing about it: Mark, it’s not a bad way to spend your life. 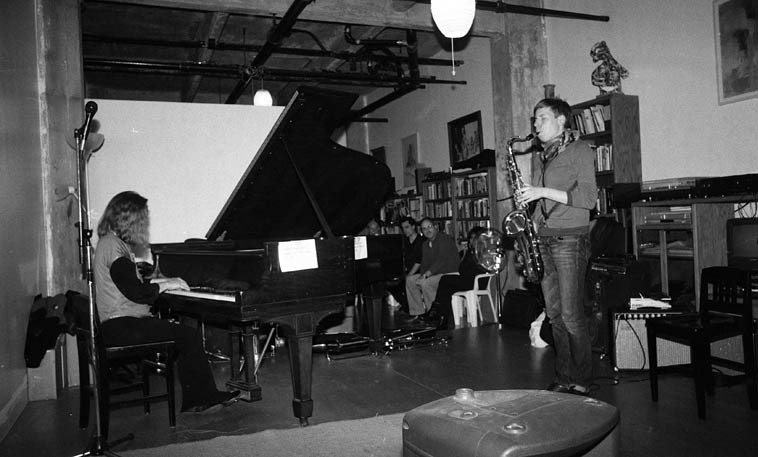 Connie Crothers and Birgitta Flick — This is toward the end of the long day of music, probably 9:30, so the crowd has thinned out — November 16, 2o14 — photo by Mark Weber (you can see George McMullen and Virg Dzurinko sitting)(George played with Connie next) 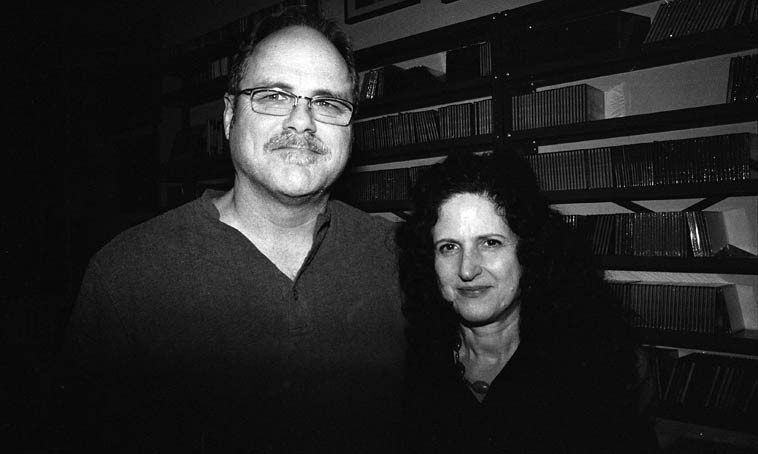 George McMullen with Carol Liebowitz — November 16, 2o14 — Talk about 6-degrees of separation! I know George from Los Angeles, mostly because we’re both close friends with the great tenor player Bill Plake, SO, when I heard him introduce himself over our dinner plates, I thought to myself How many trombonists could there be named George McMullen, so I asked Are you from Los Angeles and he said Yes, that he’d just moved to Riverdale three weeks ago — So, I introduced myself — it turns out Carol met him on a train: “Coming home from a session in Brooklyn on Halloween night… We were in a crowded subway car with many costumed partygoers, and struck up a conversation…” [email from CL 22dec2o14] — photo by Mark Weber 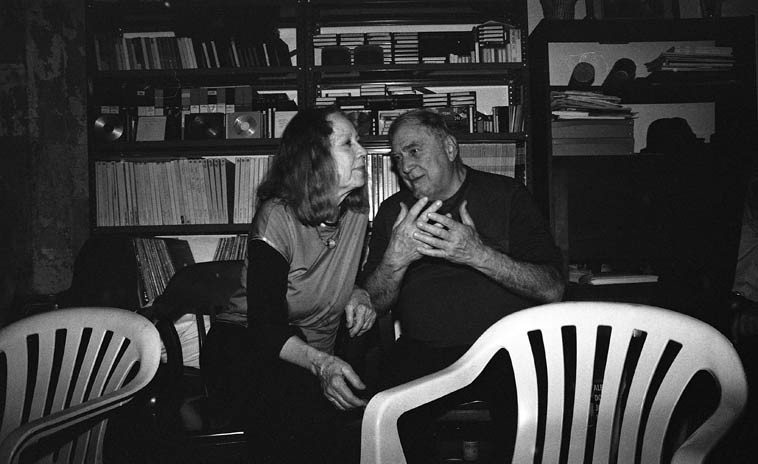 Connie Crothers and Charley Krachy — November 16, 2o14 — photo by Mark Weber — Charley lives north of the city in Garrison NY, I asked him about drive times: “I can make midtown Manhattan in about an hour & five minutes from Garrison as long as its not during rush hour. Williamsburg is another matter, one has to go to lower Manhattan and over the Manhattan bridge or go over the Tribourough bridge & take the BQE ….either way two hours……” 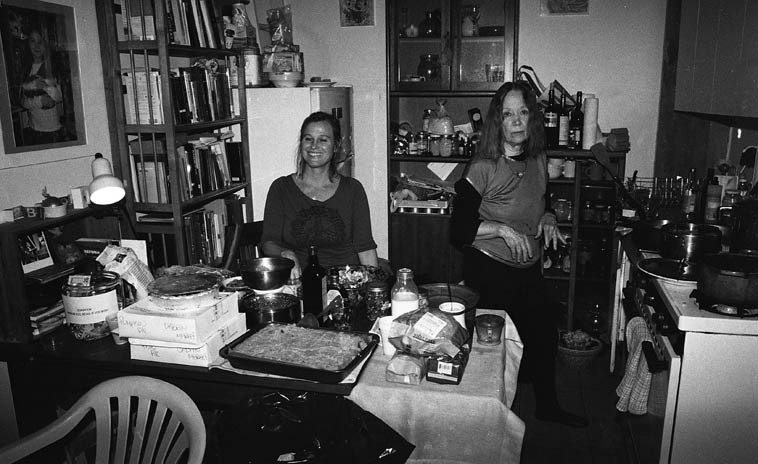 We don’t see a whole lot of Connie during her loft concerts because she’s usually in the kitchen cooking —- Here she is with her neighbor, Birdie, who helps CC at these events, a fellow yogi (we’re always sharing yoga concepts when I’m around) — November 16, 2o14 — photo by Mark Weber 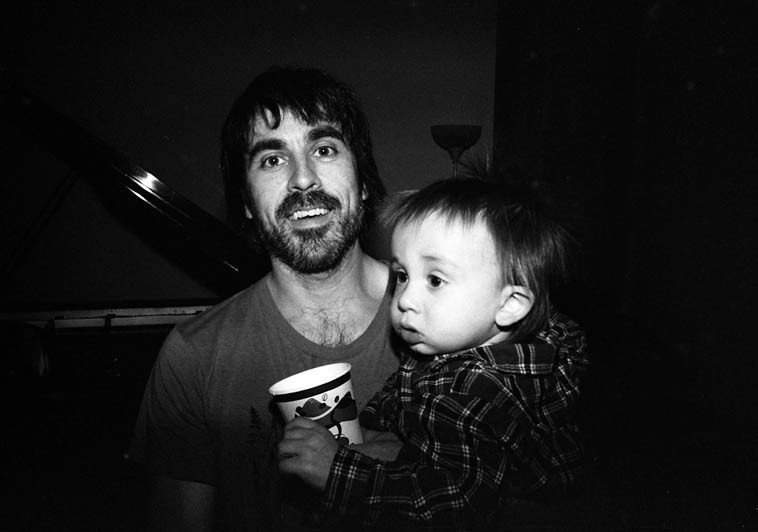 THE EXISTENCE OF THE 4th DIMENSION ON THURSDAY

I got down there (I was lodging on 23rd between 8th & 9th just around the corner) and damn’d if I hadn’t forgot my light meter, so I trek back to my hotel, grab the meter and get back out the door, times-a-wasting and the city awaits ——-

So, we have a laugh, and realize we need to have our conference, which proves that our subconscious had scheduled this appointment and didn’t bother to inform us, we merely blindly walk through life completely unaware of what we’re doing half the time!

A mere five seconds in either direction and we would have missed each other, maybe less: three seconds!

So, we discuss the upcoming performance routine takes about ten minutes, chat about sundry other things and continue on our ways, to where?
We haven’t a clue. 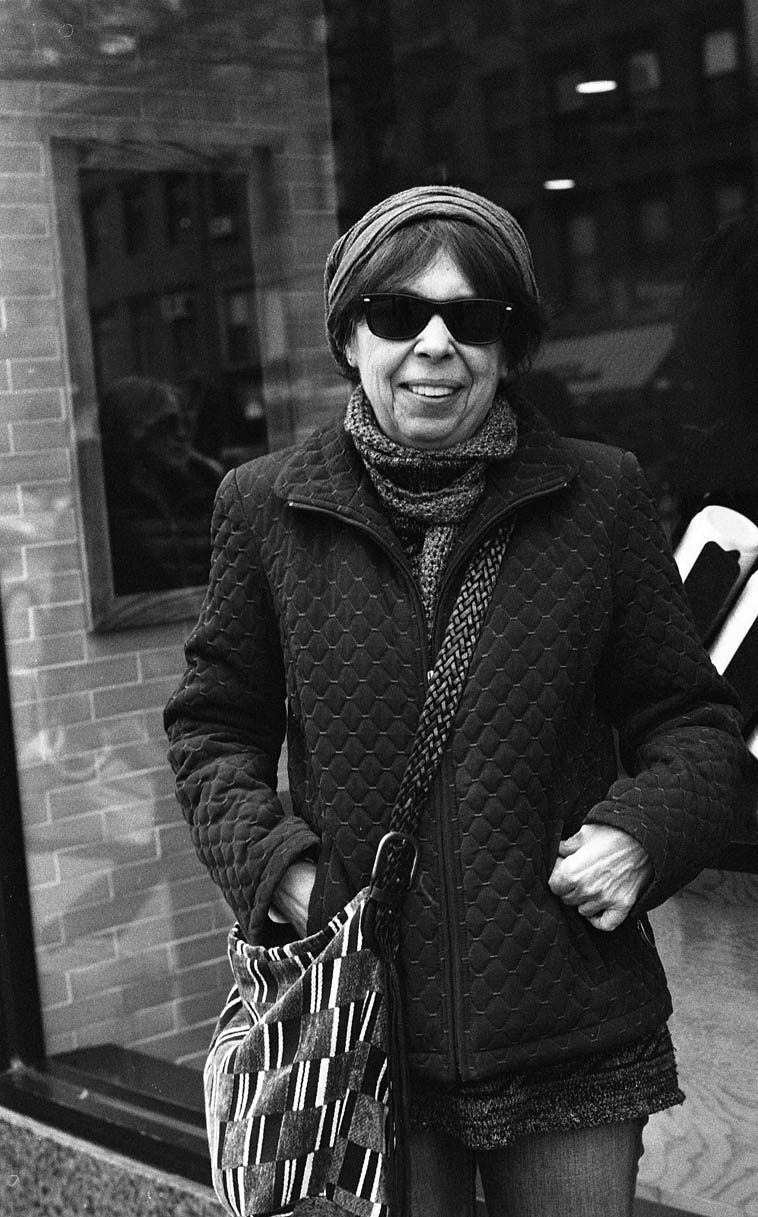 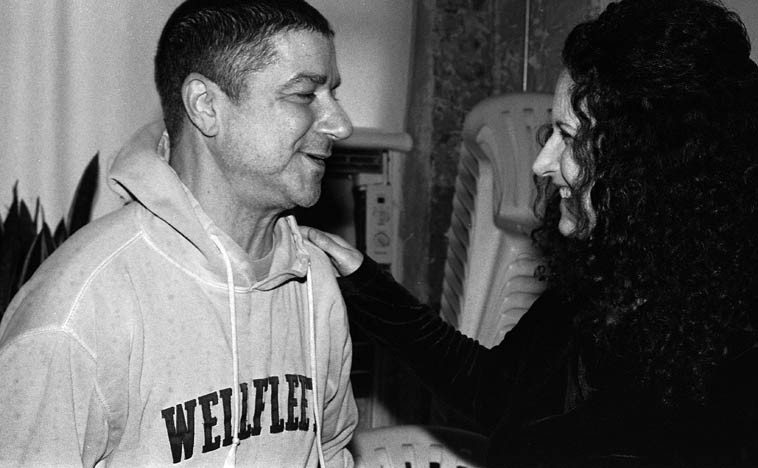 I only became familiar with Carol’s playing in the late 90s via some CDs CC sent me —— since that time I have caught her live maybe ten(?) times and it has always registered in the category of: Spellbound. Carol plays with such soul and devotion that a person has to realize there is something very deep in music for her — I love her in solo piano and I love her ensemble playing and I am also thankful she helps me get around the city, because I can get lost very fast. 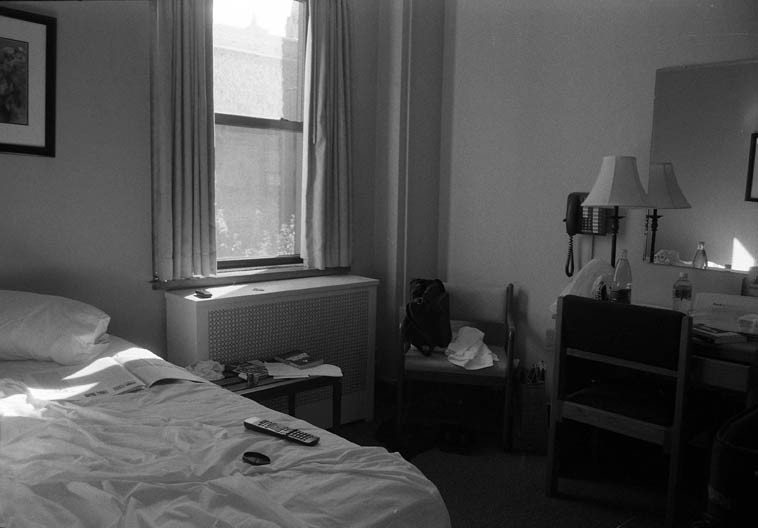 11:20am — Room 411 — my base of operations during my Autumn in New York sojourn — November 14, 2o14 — Leo House on 23rd between Eighth & Ninth Avenues, wonderful place, with a quiet breakfast buffet that filled me up with eggs & bacon & hash browns & toast & corned beef hash & yogurt & peaches, pears, orange juice, tea, quiche, blueberry muffins, pancakes, and apples —- after such a breakfast I would go sit in the reading room for contemplation (it’s a Catholic “hostelry for travelers”) with window views of lower Manhattan and just sit and pore over books 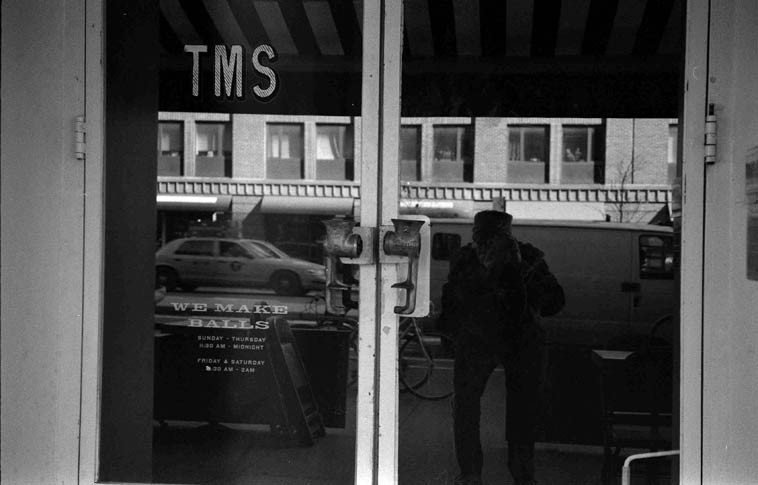 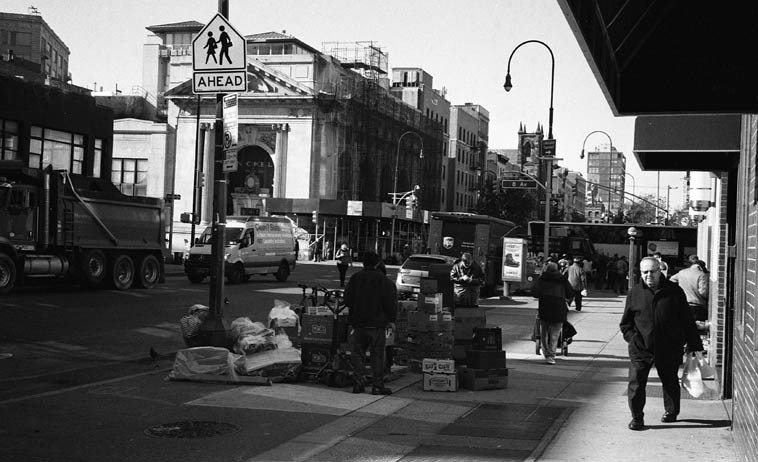 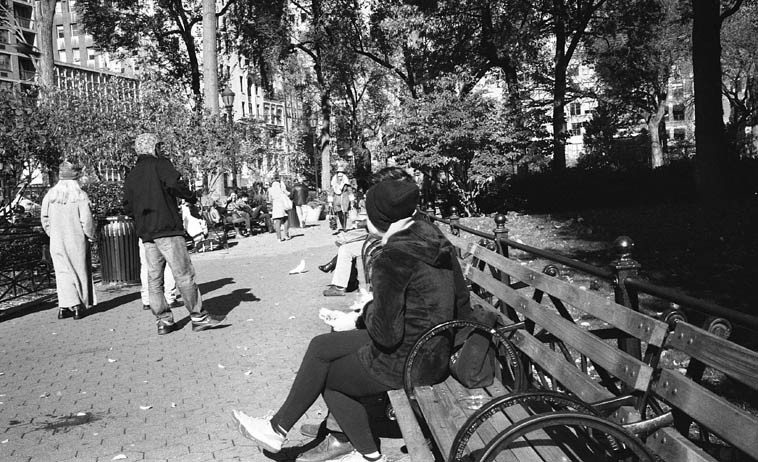 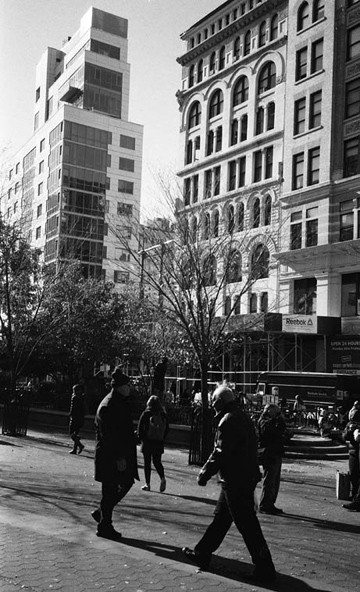 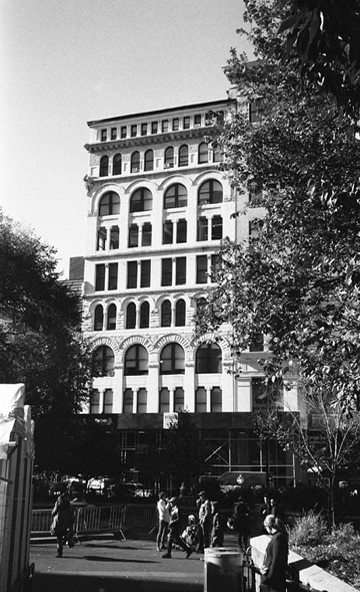 12:45 Noon — Union Square & OKeh Studios (1927) at 11 Union Square West — all kinds of crazy stuff was recorded up there (top floor) most notably Bix & Tram “Singing the Blues,” “Trumbology,” and even Bix solo piano “In a Mist,” and Duke Ellington’s immortal “East St Louis Toodle-OO” and “Black and Tan Fantasy,” the Dorseys, Pee Wee Russell, the California Ramblers, Bubber Miley, Luis Russell Orchestra, and possibly even Ethel Waters, and on March 5, 1929 the legendary “Knockin’ a Jug” with Louis Armstrong, Jack Teagarden, Eddie Lang, Joe Sullivan, Happy Caldwell, and Kaiser Marshall on drums who is the late Eddie Marshall’s grandfather of whom played along Live with this track on my radio show a half dozen years ago, essentially playing with his grandfather whom he never knew — 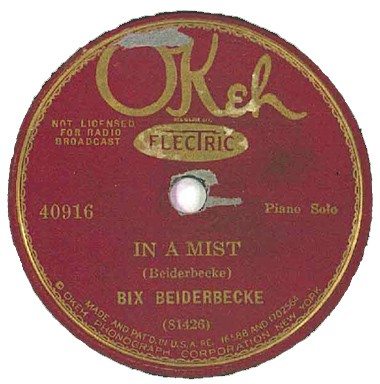 I sit and think of space-time and the fact that before 1870 that building was not there and that that recording studio was just air — and a hundred years before that it loomed over a Dutchman’s cabbage patch, and another two hundred years before that a Mannahattan had followed a deer up along the path that eventually became Broadway — but, in 1927 some young guys were in a room suspended in space at those particular spatial coordinates, even as our solar system moves through the universe expanding and spiraling, while up in that space these guys created mythical and classic music out of cobbled together songs and tidbits free as bees —- There is a design to all this, but we cannot know what it is, it comes to us as fate, and we only stop to listen for a little while, add our own coalescences and then catch a bus —- Alas, I am on foot and I need leave these reveries on the park bench — 14th Street is the southern border of Union Square where I catch Broadway and walk south a few blocks to Strand bookstore where I hope to find a copy of Bede’s HISTORIA ECCLESIASTICA GENTIS ANGLORUM (731) or even the recently published rendering of Cotton Vitellius A-15 (Beowulf) by JRRT. 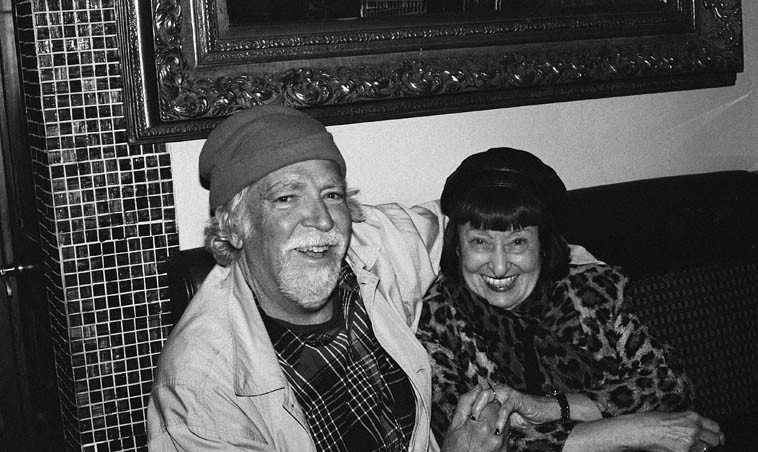 Me & Sheila Jordan in a little restaurant around the corner from her apartment — The Dish, 201 Eighth Avenue (between 20th & 21st) —- First thing off the plane I called Sheila and told her that I’ll never be able to get from LaGuardia to her place in time for our dinner engagement at 6 — No problem, she had a radio interview to do at 7:30 and I could come after that — And when I got to her place, her roommate Jay Clayton was in the midst of one of her Scat Labs and I got to watch 6 or 7 scatters do their stuff on “What Is This Thing” and Sheila even joined in in spots! It was tremendous — November 12, 2o14 — photo by our waiter, under my direction (these youngsters know nothing about antique cameras!)