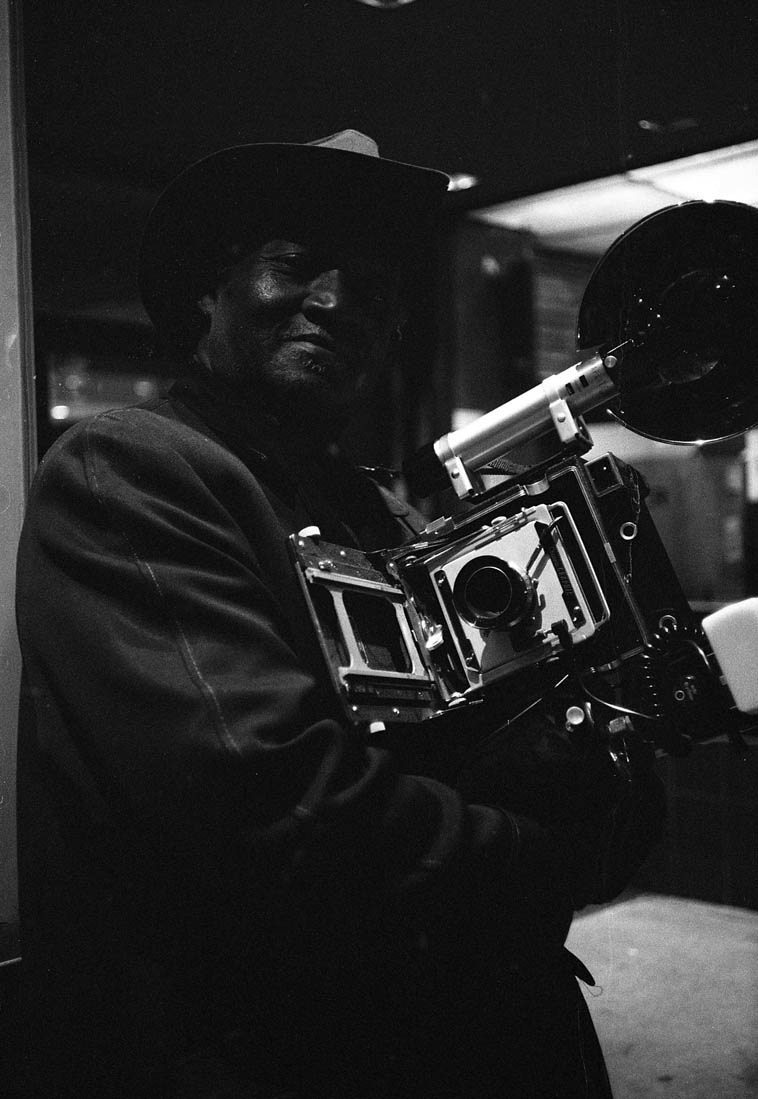 I had decided to take this night off and just hang out in my hotel room and watch the boob tube and read old books — I had been at the Natural History Museum to see the exhibit on Pterosaurs (on 86th Street) and had walked over to one of my favorite restaurants Viand Cafe (75th & Broadway) but they were not accommodating to single diners on a Saturday night (well, I never) I caught the subway back down to Chelsea and found a deli with the improbable name Garden of Eden and was walking with my bag of food down 23rd Street to my room when I see this guy with a more antique camera than I even use! He is leaning against the ticket booth of The Chelsea cinema. I walk straight up to his smiling face and say incredulously: “Is that a Speed Graphic?” and he nods, and I say, “Is this 1930? Am I in a time warp?” These are the cameras newspaper men and ambulance chasers and Weegee used back way back a long time ago. Big flash bulbs, leave you half blind. I wound up hanging with Louis Mendes for an hour and we had a good ol’ time talking about cameras and life. His was actually a variant on the Speed Graphic called the Crown Graphic, that he’d bought back in 1958 and he had it all tricked out with a polaroid back and digital lenses, but he could still shoot it in the old way if he needed. We took each others’ photo (I had my Olympus 35RC with me — small, it fits into your coat pocket) — 6:30pm November 15, 2o14 — photo by Mark Weber — check out Louis Mendes on the internet, or do we call it the web?

Why do I read such old books?
Because I don’t need to know what’s in modern
………….literature anymore, I’ve already read all that.
At this stage of my life I find comfort in reading the old texts,
even as they can be disturbing in their reality, even more
than reading about dystopian present world . . . . There is
…………….something in the rhythm of the
sentences that comforts me, especially Anglo-Saxon
with their verbs before the nouns way of saying things,
……..their eloquence, and the power invested in
each word, so that you must read slower, slow
down,
and
take in
each
word like it is a world unto itself

Words have power, if you can line them up in certain ways, things
can happen

After writing the caption for photo “Roger Mancuso on the move”
I got to wondering if
motion parallax could be used in poem writing?
And then I realized that, yes, of course,
it’s just another name for what I refer to as a poem
……………………….revolving like a Calder mobile, how
it turns around and tenses change
……….and the cases of the words do not matter . . . .

Quintus Horatius Flaccus is always best to turn to
with his advice that a poem (art) should have harmony,
proportion and an appropriate rhythm — Art Poetica 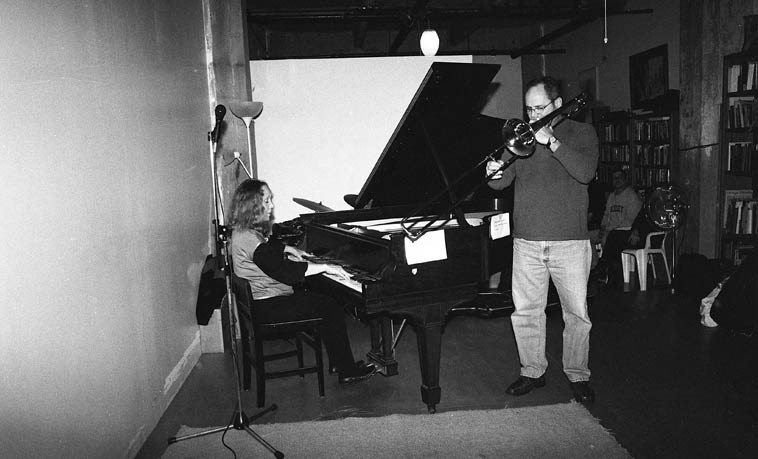 Connie Crothers and George McMullen — November 16, 2o14 — photo by Mark Weber — It has been long years ere a trombone has ventured into these realms, sayeth the ghost of Willie Dennis. 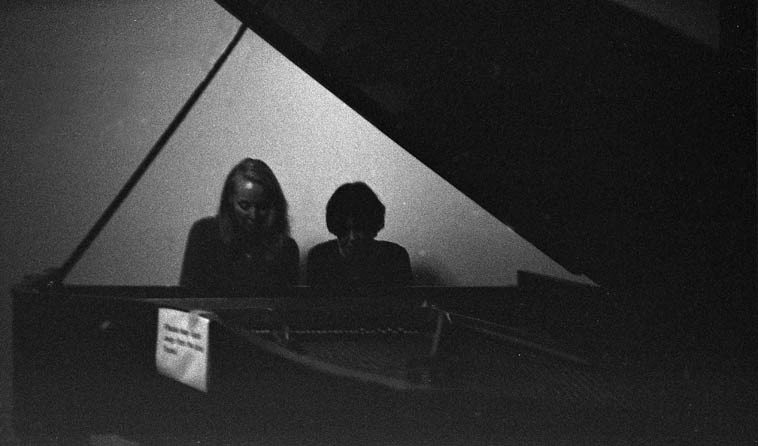 Kazzrie Jaxen & Virg Dzurinko, four-handed piano — November 16, 2o14 — This photo is about the same quality as the one surviving picture of Lincoln at Gettysburg, and that’s because (here comes the excuses) the camera I use with flash was out of film and the light was very gray at this very end of the evening — photo by Mark Weber with Olympus RC-35 rangefinder 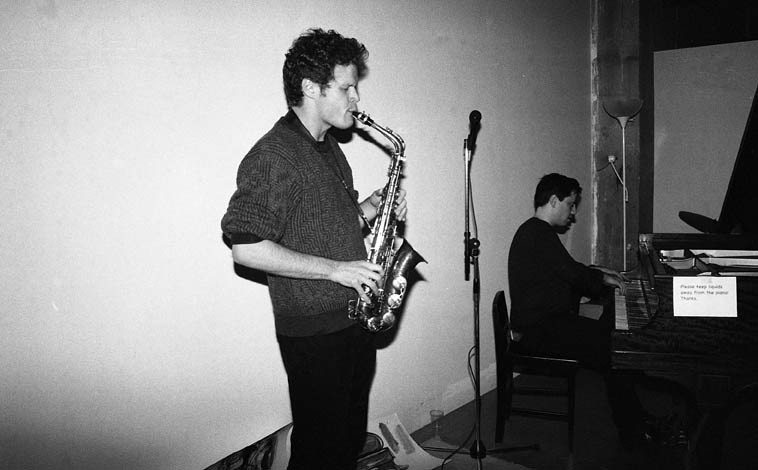 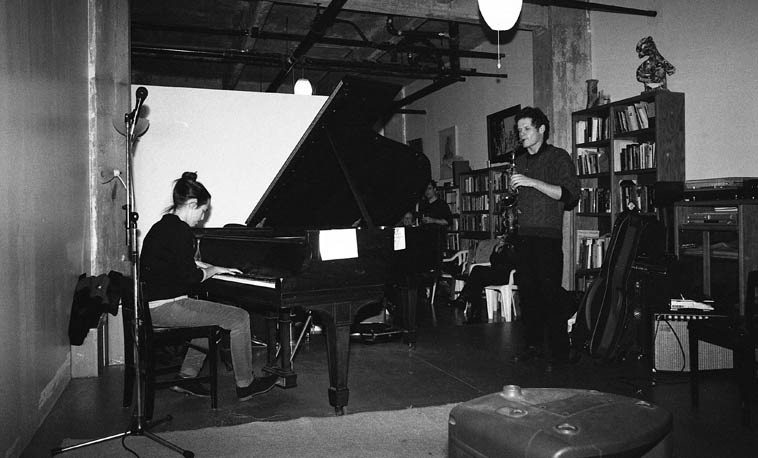 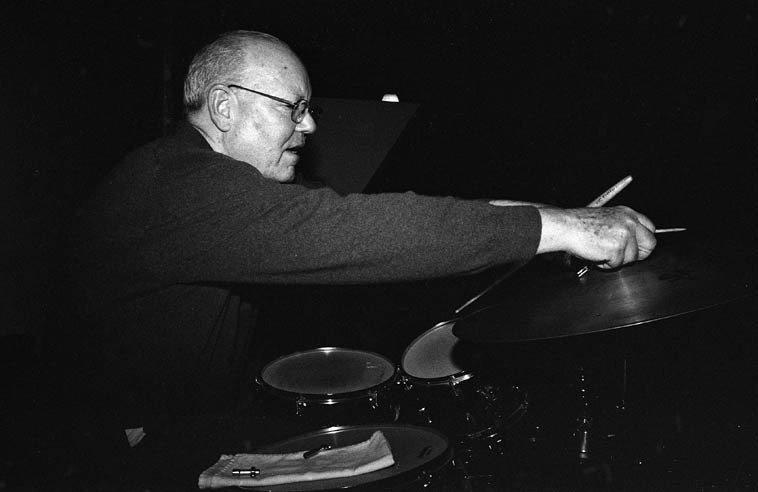 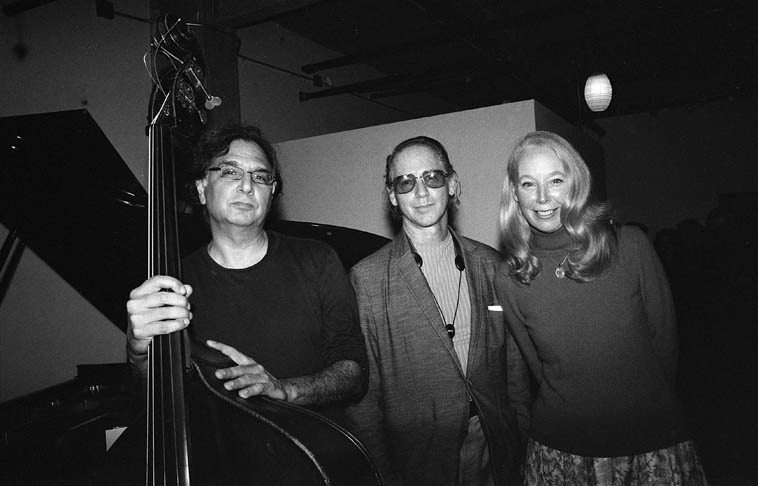 Don Messina, Jimmy Halperin, Kazzrie Jaxen —— November 16, 2o14 — photo by Mark Weber — Jimmy didn’t bring his horn this day, when I saw him across the room I was already hankering to hear his particular tenor logic, his duet cd PSALM with Sal Mosca is one of our favorites here at 725, as well his masterful trio cd CYCLE LOGICAL w/ Bill Chattin & Don Messina — THAT was my first question: “Jimmy, where’s your saxophone?” 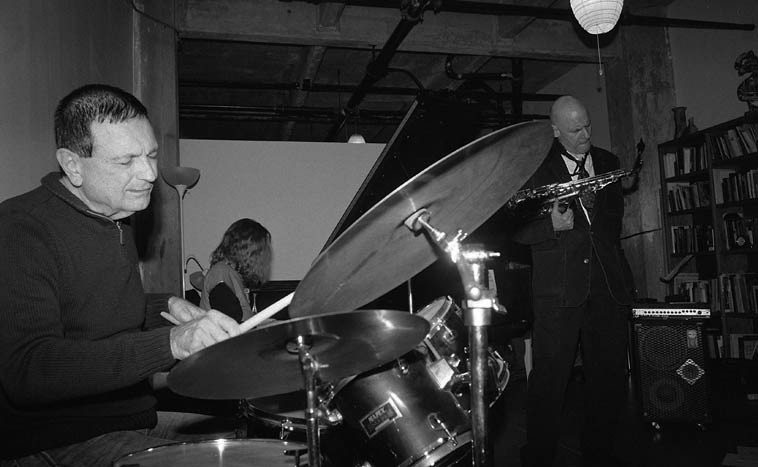 The Connie Crothers Quartet (Ken Filiano is not in the frame) one of the great bands of the 21st Century having such far-ranging intensity of intentions of immediacy and Now-ness it is staggering — this is the only shot I took of the band this day, I had read my 5 poems and sat down stage right, then snapped this one shot — They opened up with “Melancholy Baby,” then I did my poems, then they played “Deep Friendship,” and unsuspecting, Richard Tabnik called me back up, so I read a long rambling poem about Richard Brautigan, or rather, a notion that is in the Brautigan vein . . . . . Roger keeps a Mapex set at Connie’s studio, but has no special preference for brands, he has 4 sets total

A swirl of smoke from a pipe

Something should happen — both while creating
and experiencing art

A central characteristic of humankind is that they are clever
Art is play: Rearranging materials into shapes and sounds

In many ways art is a summary statement. As time and place
………flow through you, as you
work your craft, as if history is progressive, or
more likely Fate lights the way (Gaed a wyrd swa hio scel!
……..–Line 455 Beowulf– Fate goeth ever as she must — Tolkien trans.)

So going, it is as with the tides and currents of the ocean,
as the autumn leaves fall . . .

We are but pilgrims:

The ineffable, indescribable
awe-struck ever-present
Lester Young in the room with us now 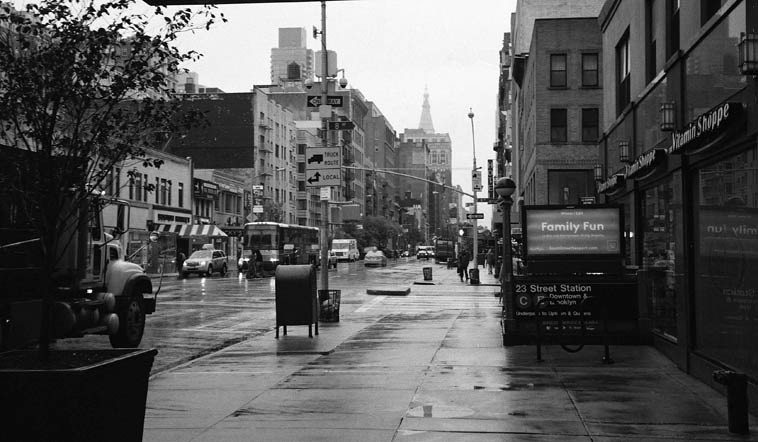 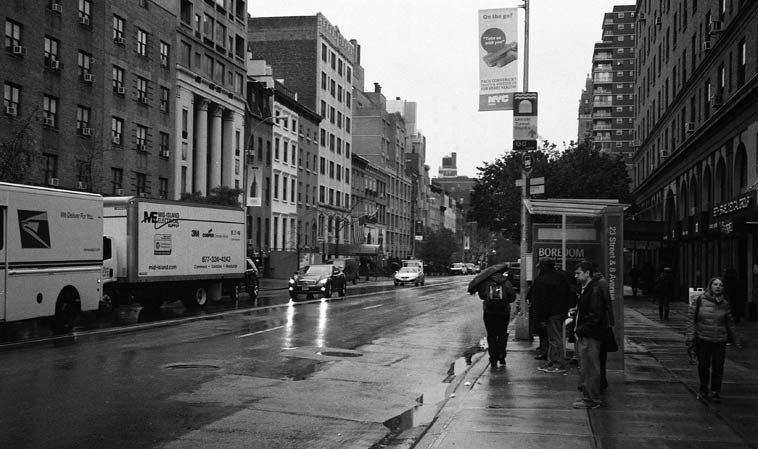 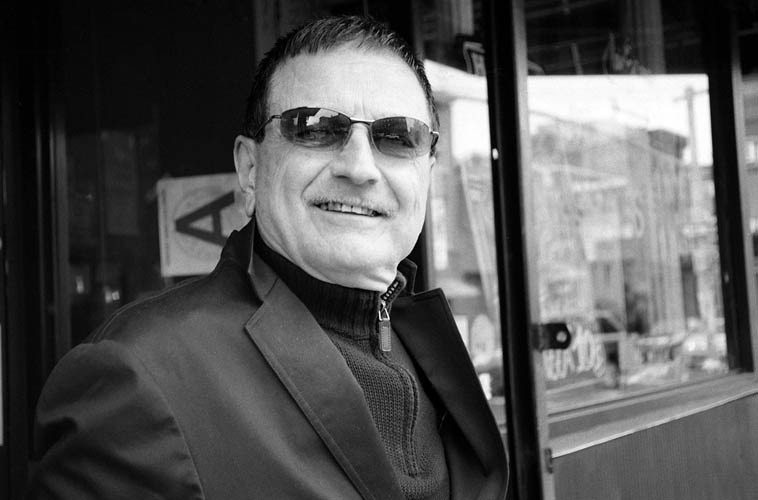 Sunday on our way over to Connie’s loft waiting for the bus outside Driggs Pizza on Driggs Avenue (Bedford stop on the L Train) — Roger Mancuso — November 16, 2o14 — photo by Mark Weber 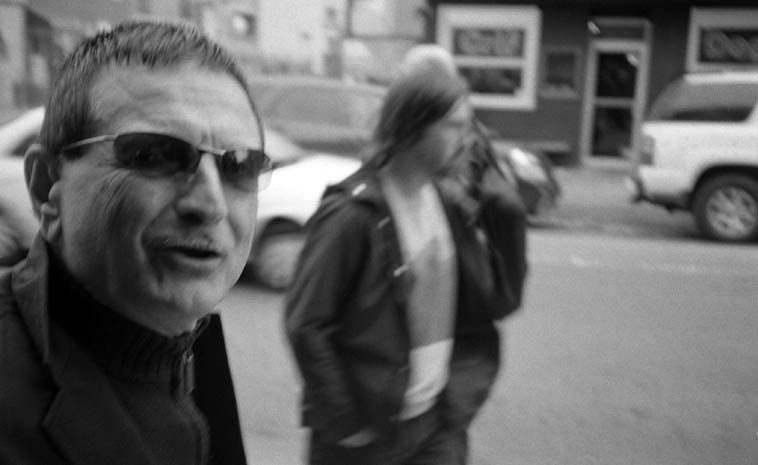 Roger Mancuso on the move —- I love these kind of shots, where the subject & camera & background are all in movement — this is what’s called motion parallax, a term mostly used for movie making —- makes for a dynamic frame —- November 16, 2o14 — photo by Mark Weber 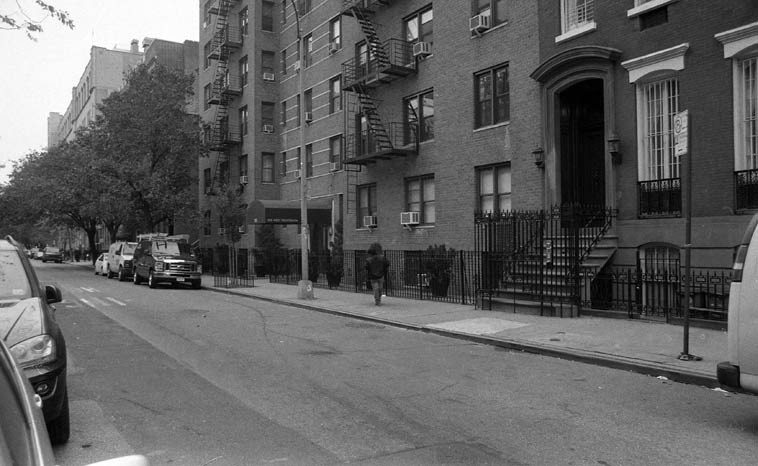 Have you ever wonder’d where Sheila Jordan lives in the city? It’s the one with the awning —- 18th Street near 8th Avenue in Chelsea — photo by Mark Weber taken right after bumping into Virg — November 13, 2o14