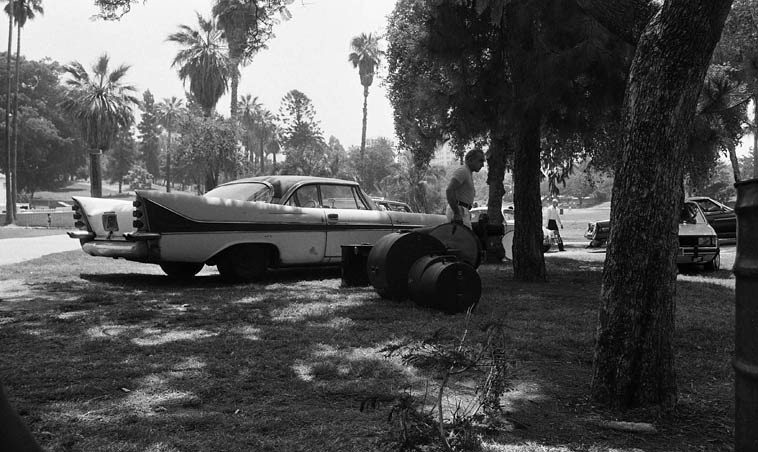 This guy really has it going on with those fins — MacArthur Park Bandshell — August 22, 1982, downtown Los Angeles — I didn’t catch this drummer’s name, obviously a time traveler — photo by Mark Weber

I suppose there’s the one all-encompassing reality
and
whichever unification theory that might be our physical reality:
string theory or parallel worlds,
flux, warped, supersymmetry, quantum . . .
or
the super-consciousness of Buddha’s notice and the reality
of fire, the reality of the house painter, the auto mechanic,
the Governor, the shoe salesman, the museum curator, and
the pole vaulter . . .

The reality of listening to jazz in the morning
or late at night (it’s different, you know,
at different times of the day,
your psychic is aligned with the sun
or moon, the clouds, the eggs in the frying pan, or
the tomato pizza aroma from the stove . . .)
The reality of General Theory of Unification of Harmony: either
in a diatonic key or bi-tonal, pan-tonal, or unchecked
by a central fundamental home tone
conforming not to equal temperament, creating within
another reality . . . . (when someone asks me How to listen
to jazz I tell them: Listen for the first note, because everything
that follows is related to it) . . . . . 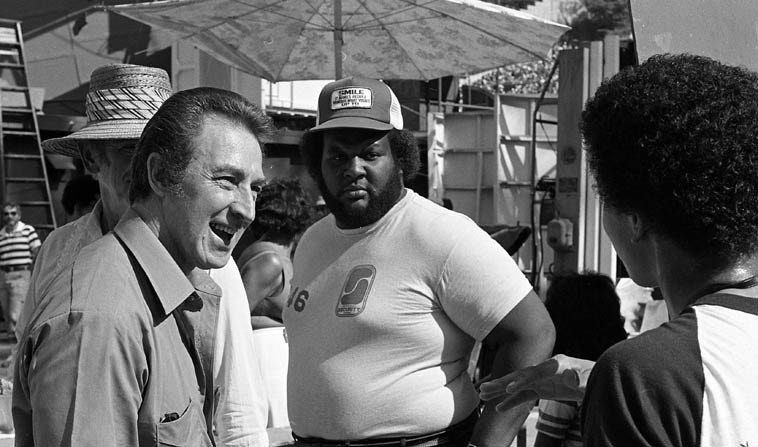 Currently, gravity has yet to be successfully included in a theory of everything. But, jazzman Buddy DeFranco has renormalized electroweak interactions between the lower register and high on the clarinet so that quantum loop gravity becomes its own reality — Buddy DeFranco — June 20, 1981 backstage at Hollywood Bowl — photo by Mark Weber (Note the equation on that stagehand’s hat: SMILE It Makes People Wonder What You’re Up To) 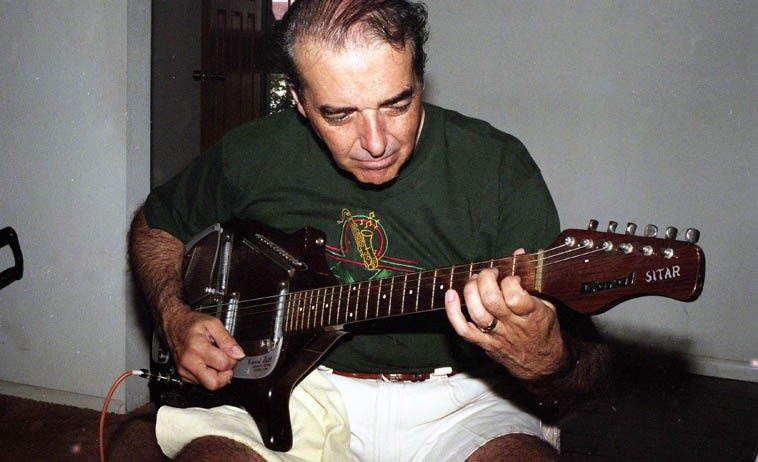 Michael Anthony at home with his Coral electric sitar-guitar invented by Vincent Bell — August 12, 1996 — photo by Mark Weber — (Michael tells me that he has since sold this guitar he used so often in the 60s in the L.A. studios) —- Today we’ll spin a little recording we made in my living room where I convinced Michael that the Downton Abbey Theme was going to be a hit, or, if I didn’t convince him, he was at least nice enough to come over and record it for the radio show — we got 3 very different versions in that session, and the one I’ll play today is during soundcheck while Michael was familiarizing himself with the tune as the soundtrack played we decided to take a pass that way as well, and Michael suggested we call it “Hanging Out With the Record” — subatomic particle reducers for real . . . . 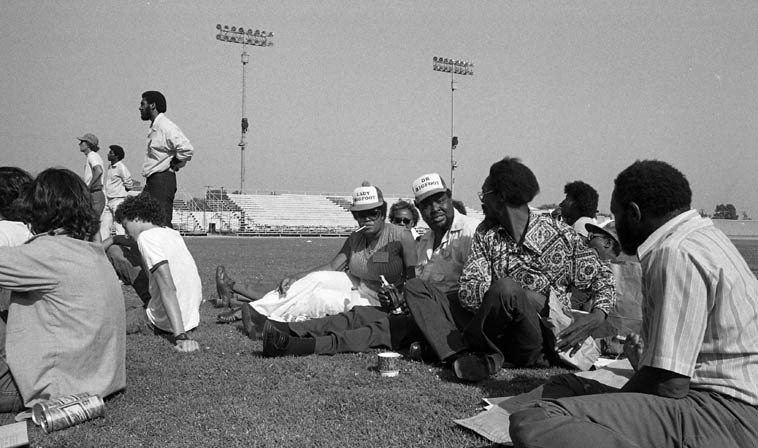 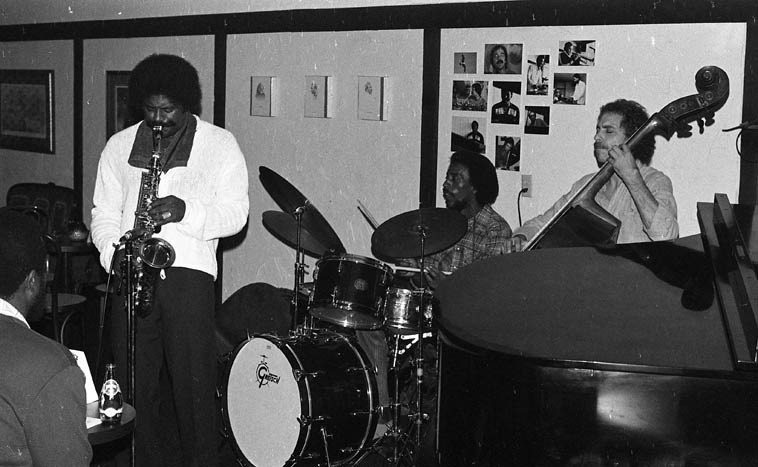 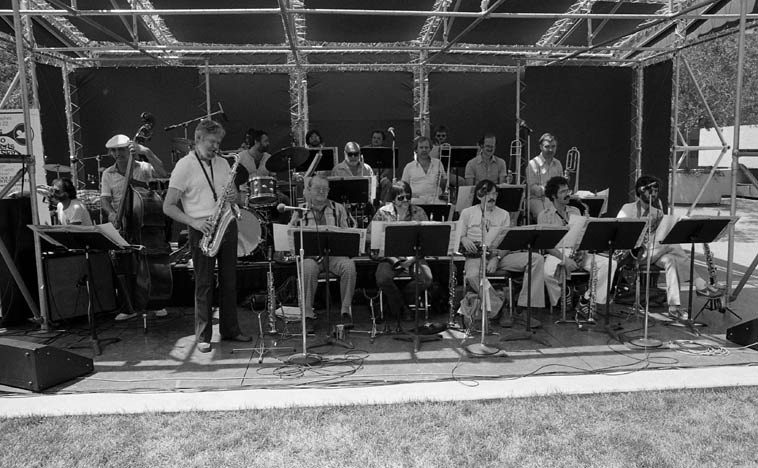 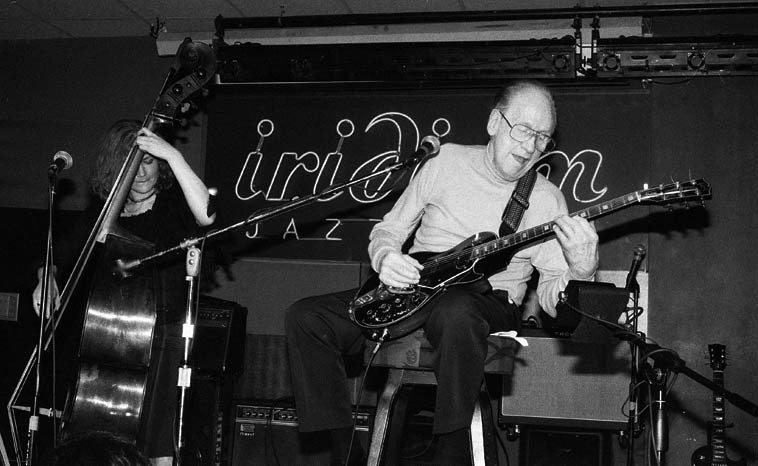 Les Paul Trio — July 22, 2002 at the Iridium, 1650 Broadway, Manhattan — Nicki Parrott, bass — photo by Mark Weber —— Nicki Parrott has made a gang of records for the Japanese market, but I’ve never heard any of those, so we’ll make a selection from one of her many records stateside on the Arbors label for today’s radio show 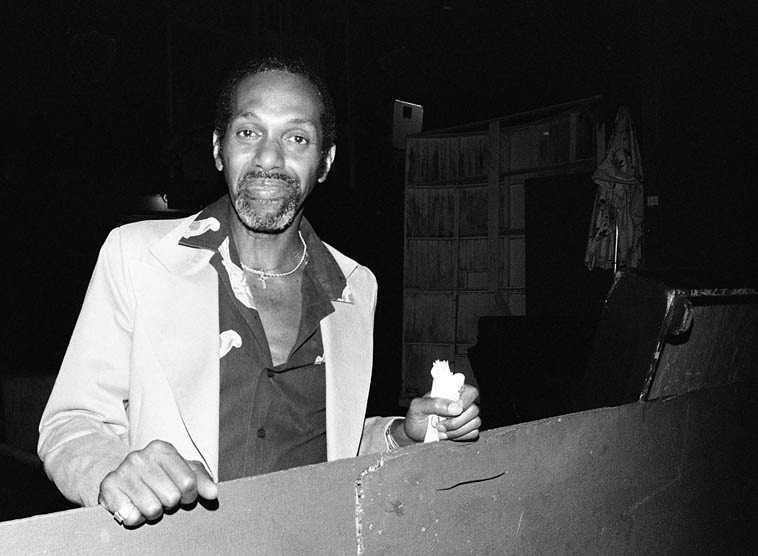 The theoretical physicist, and pianist, Walter Bishop, Jr. was instrumental in supporting Charlie Parker’s contention that the fundamental description of nature is to be free — July 30, 1980 Los Angeles– photo by Mark Weber —- Walter was in the first ripple right after the first wave of Bop in the 40s, became Bird’s pianist 1950-1954 taking over from Al Haig — those years he was in the lab with Kenny Clarke, Art Blakey, Julius Watkins, Kenny Dorham, Miles, Sahib Shihab, Stan Getz Four Brothers Tenor Saxophone Stars (Zoot, Al, Brew, and Allen Eager), Fats Navarro, Tadd Dameron, Mundell Lowe, he was on, at least, 3 dozen Bird w/strings dates —- We talked about an hour backstage there at Hollywood Bowl that night at a tribute concert for Charlie Parker: Bless The Bird 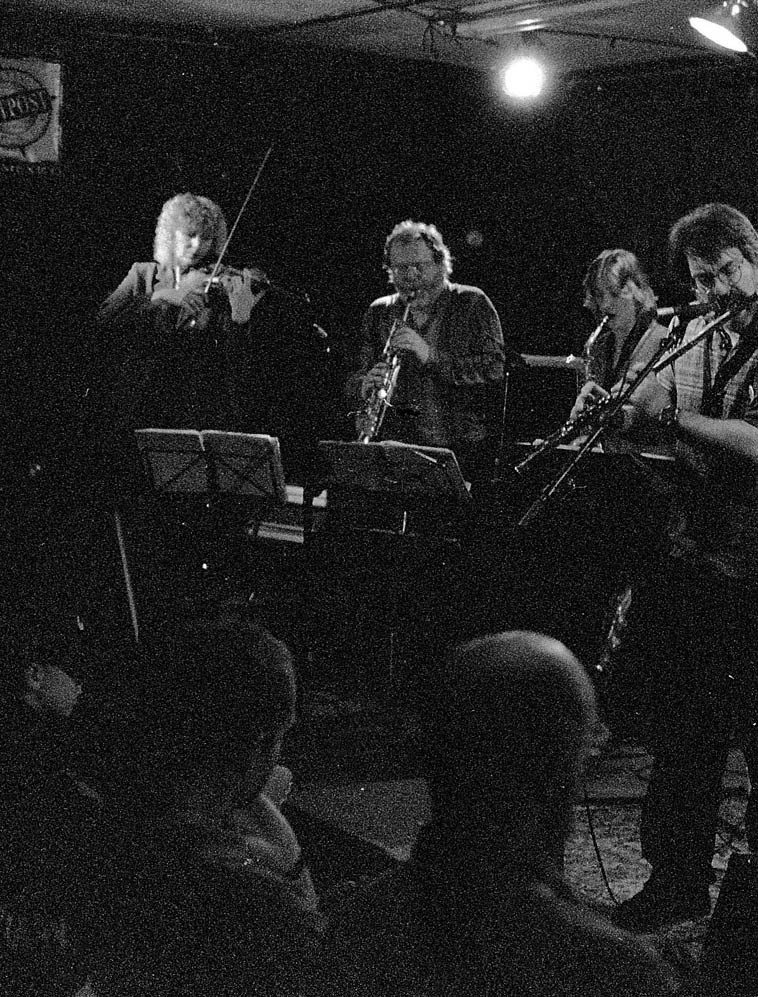 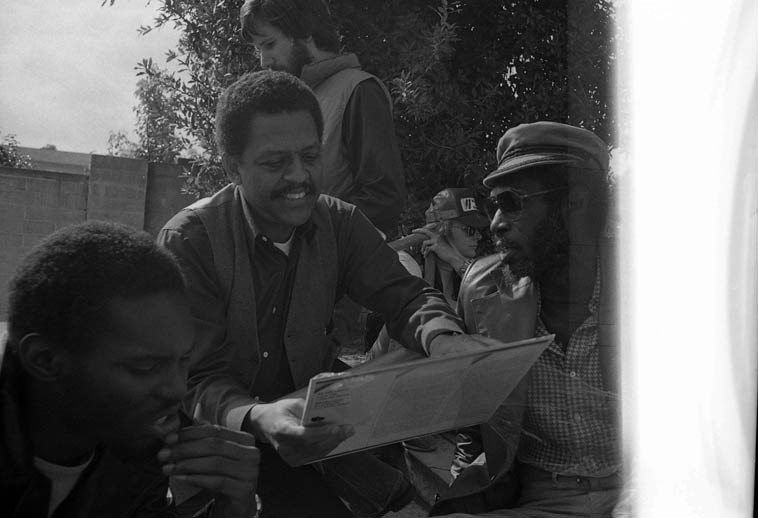 We’ll be playing “Blue Nellie” from this very album in Bobby Bradford’s hands: Harold Land’s TAKE AIM (Blue Note)(I still have it in my collection — had it with me that day so Martin Banks, wearing sunglasses, could autograph it for me, he wrote that tune, and plays trumpet on the record) — March 28, 1981, Claremont Colleges, California — photo by Mark Weber — that’s Martin’s son Denzil in foreground 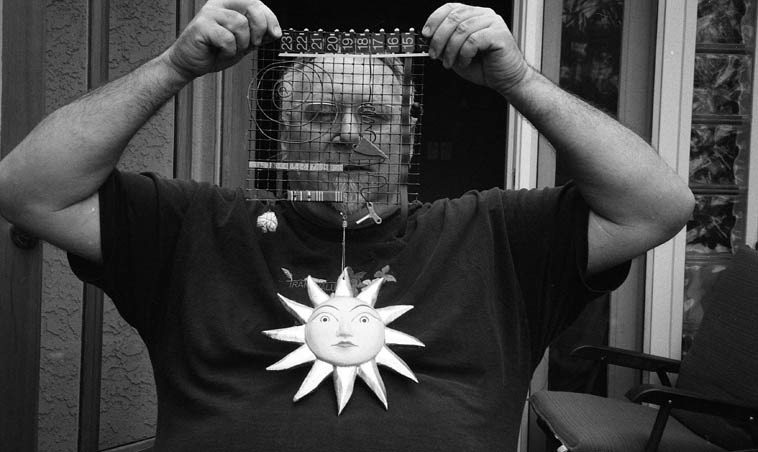 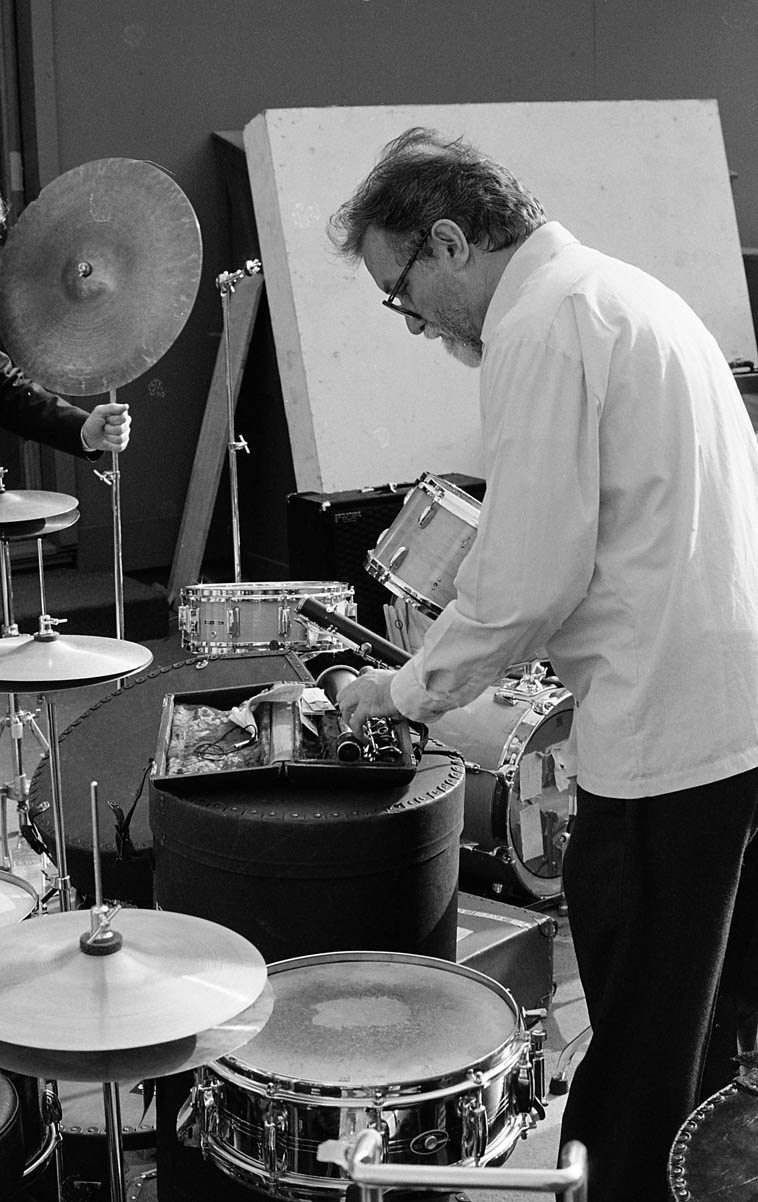 Bill Smith — June 19, 1982 — one of the greats of clarinet backstage at Playboy Jazz Festival, Hollywood Bowl — photo by Mark Weber 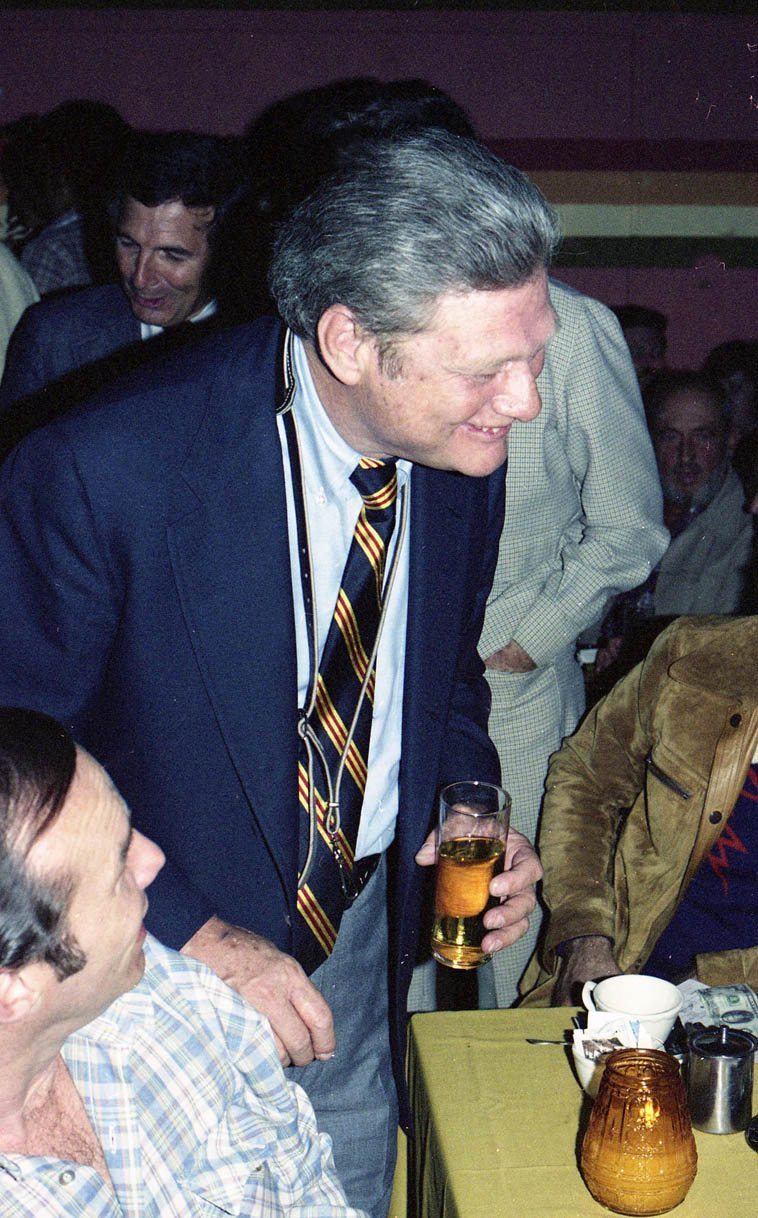 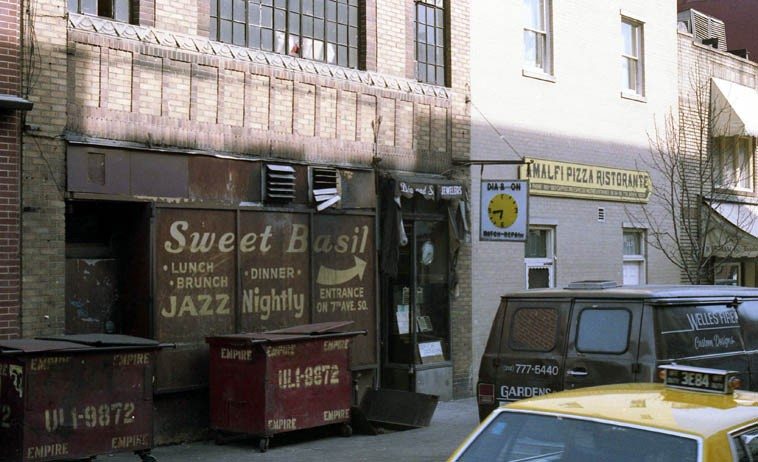