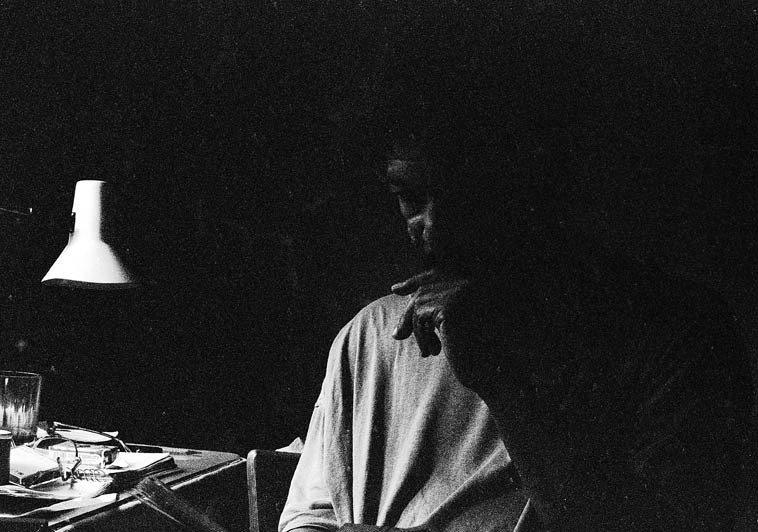 First time I ever heard Butch was a cold fog-bound day in February of 1975 at the venerable Little Bridges Auditorium, Claremont Colleges, where the student David Murray staged a concert. A constant in their repertoire those years was Butch’s “Joanne’s Green Satin Dress,” and David’s calypso thing that he later titled “Flower’s For Albert” (at least, I don’t recall him calling it that at that time and I heard it a lot during those years David was at Claremont). David was investigating Albert Ayler’s sound those years, as well, he’d talk all the time about Sonny Rollins, as well, we all were thinking about Coltrane, INTERSTELLAR SPACE (Impulse, 1974) had just been issued and we were on that like white on rice. David was also working on his masters thesis on Paul Gonsalves, which would be interesting to see someday, so that was in the mix, also.

Backstage after the concert I asked Butch if I could have a tip off the bottle of Courvoisier and he said: “My friend, you can have anything except my horn.” I never did like that brandy, maybe it was Hennessy? Didn’t like that one, either, but then cognac never appealed to my taste buds. It was like this distinguished bottle was there only to signify the event, as a gift, looking elegant. Sure couldn’t drink it. Betty Carter liked that stuff, too.

I had lunch with James Newton yesterday (6feb15) at the Tomato Cafe (Isn’t that a splendid name?) here in Albuquerque, and he was saying how he felt Butch in those years was strongly influenced by Don Cherry. I mentioned how Butch once told me years later: “I slept on Tommy Turrentine.” And then when he looked into Turrentine he was very impressed. I have to admit, for whatever reason I slept on Tommy Turrentine, too. Did you know he made records with Sun Ra? (the album BLUE DELIGHT, 1988) Wow. Besides, all those great hardbop records he made in the early 60s as a member of Max Roach’s quintet.

In this interview Butch is articulate and searching, eloquent in explaining his methods and the early stages of conduction, and his formulation of skyscrapers in the big cities of the world. He really takes some interesting turns, things I wouldn’t expect. How to construct a musical piece. All the convergences that came together on lower Manhattan during the Loft Scene of the 1970s. (Butch left California for NYC in 1975, sometime after that concert.) The musical problems he ventured into and how he solved them. His “mission” as he calls it. He accomplished a lot in the fleeting 65 years he was allowed.

I said to James how conduction didn’t seem to leave the musicians that free. He said: “Butch has certain cues that could organize composition, and others that would leave you free.”

Here’s some other things James Newton said yesterday about his friend Butch Morrs:

“I always thought it was in the tradition, when he first started working on conduction.”

“It brought a new immediacy to the process and the integration of group improvisation and composition.”

“I think David Murray had a lot of influence on Butch, even though David was younger than Butch, a lot of concepts were worked out in David’s big band. Certain things that Butch did in that environment were important to the development of his language. It was a little bit more connected to the tradition. The Downtown side of Butch was a different Butch, but I really enjoyed what he did with David’s big band.”

James had done a lot of conducting himself and I found out that Gerald Wilson is his favorite conductor (!) I had mentioned in passing how Gerald would be all over the orchestra waving his arms and jumping around, how it felt like the 1930s watching him with his hair flying all around. James said that Gerald had to have been a great dancer in his younger days, that his conducting was very much about moving his body.

He also felt that Sun Ra laid out certain precedents in conducting that were influential.

“The baton really became his instrument.” We had been talking about Butch’s decision to set the cornet aside. “I don’t think he would have been as successful as he was without having been a player. His big influence was Don Cherry.” James spoke about Cherry’s “Brown rice mentality” [laughter] how Cherry brought in all sorts of musics of the world, “kind of an alternative life style that came out in the horn, a brown rice mentality.”

James also stressed that David brought melody to the table back in the Loft days. He stresses that it was Bobby Bradford who influenced this focus, remembering the first time he ever heard Bradford (we all called him “Bradford” back then, as if it was his first name) was at Stanley Crouch’s house and Bradford played 40 choruses of solo, “and it was all melody! I couldn’t believe a person could do that!” He also feels that Murray’s control over the upper register of the tenor is extraordinary, on the level of John Gilmore (he suggests Gilmore’s solo on “Shadow World” of the Sun Ra Foundation Maeght 1970 recordings) as well, “David’s mastery and absorption of Ben Webster is total.”

“Bradford was a huge influence on all of us.”

The last time he saw Butch was at the Munich airport and Butch was on his way home to NYC after a residency in Istanbul, only a year or so before he passed. The last conduction I ever caught was during his July 2002 residency at the Bower Poetry Club and he had Billy Bang, and Elliott Sharp on the skyscraper that night, and after about two very short encores, I walked up and Butch said, obviously pleased, “Well, what did you think?” He always looked pleased and somewhat already thinking about what had just transpired. I said something obvious like: WOW. The audience was wonderfuland lively, very New York. Just before they had convinced him to do yet one more encore (I gather Butch didn’t do encores, very often), he said, “Alright all right, we’ll do one more short one.” And a drunk at the long bar yelled in a gruff voice: “And it better be good!” And the whole place just broke up, roars of laughter. I love New York. 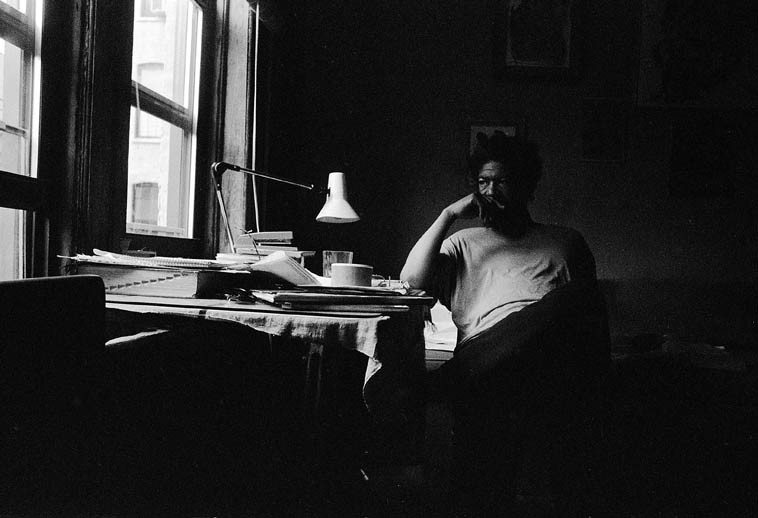 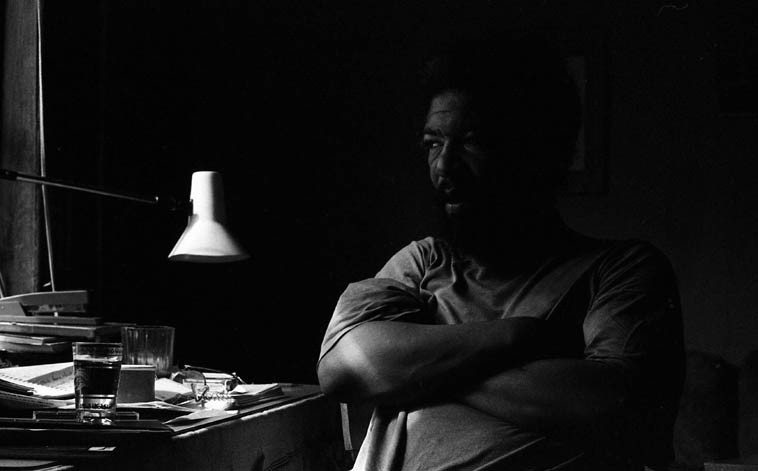 Butch Morris — July 1, 1997 — photo by Mark Weber — He was way off into this book he was reading at the time: THE IMAGINARY MUSEUM OF MUSICAL WORKS An Essay in the Philosophy of Music (1992) by Lydia Goehr 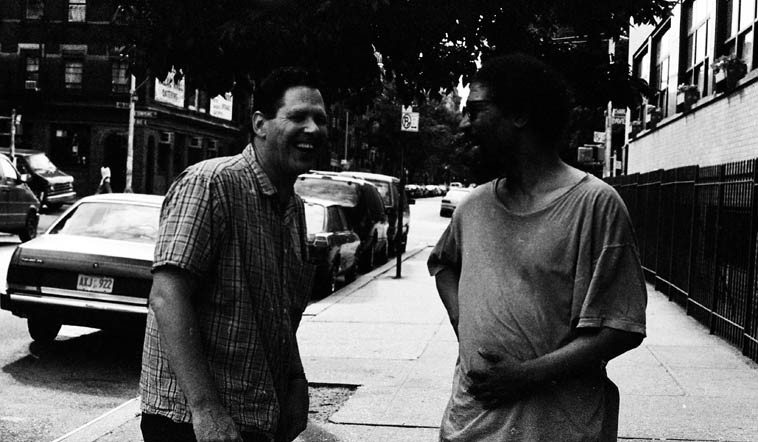 Bruce Ackley and Butch Morris on 7th Street NYC — July 1, 1997 — photo by Mark Weber —- Bruce was in town for a concert with ROVA 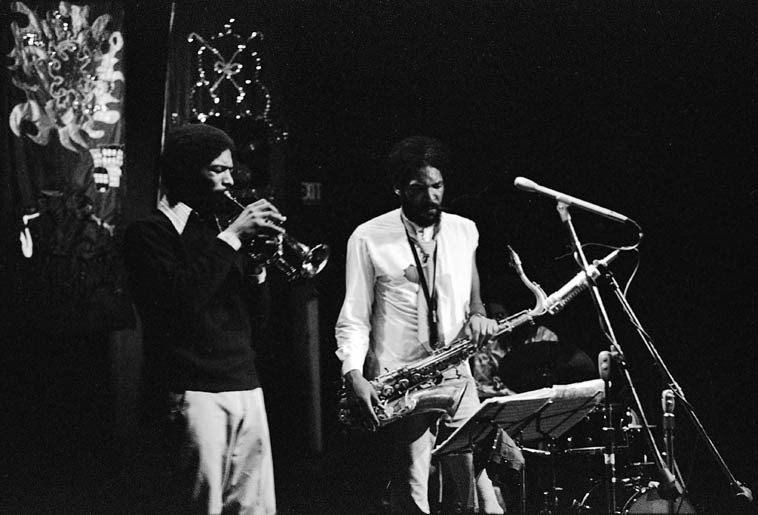 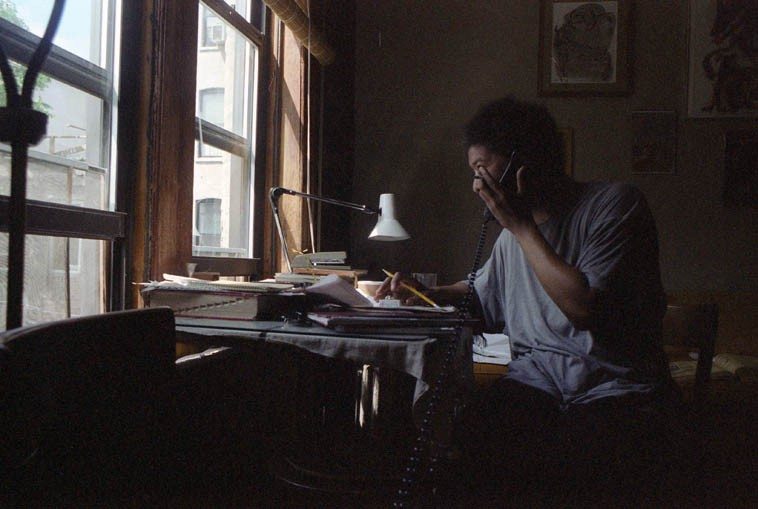 Whenever you see a jazz big band or one of Butch’s conduction orchestras you are seeing a logistical miracle: Just the amount of time it takes on the telephone to coordinate everybody’s schedule for even a rehearsal can be a nightmare and very time consuming — photo by Mark Weber — July 1, 1997 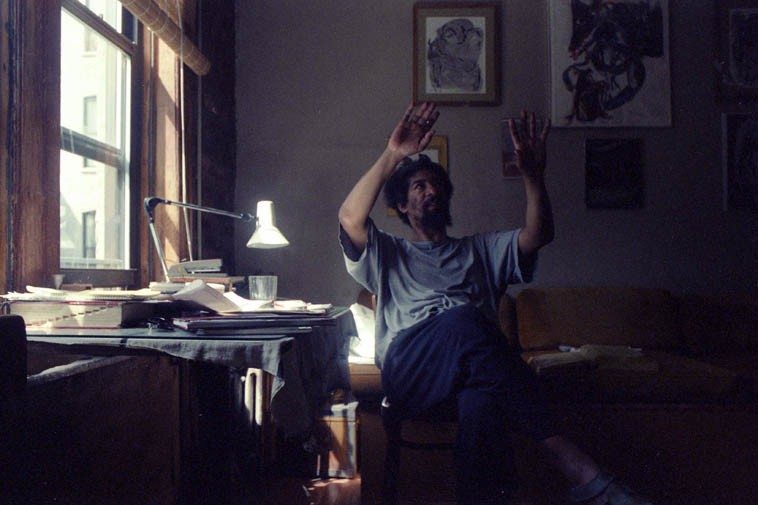 Another book Butch pulled my coat about was THE WORLD IS SOUND: NADA BRAHMA Music And The Landscape of Consciousness (1983) by Joachim-Ernst Berendt — photo by Mark Weber — July 1, 1997 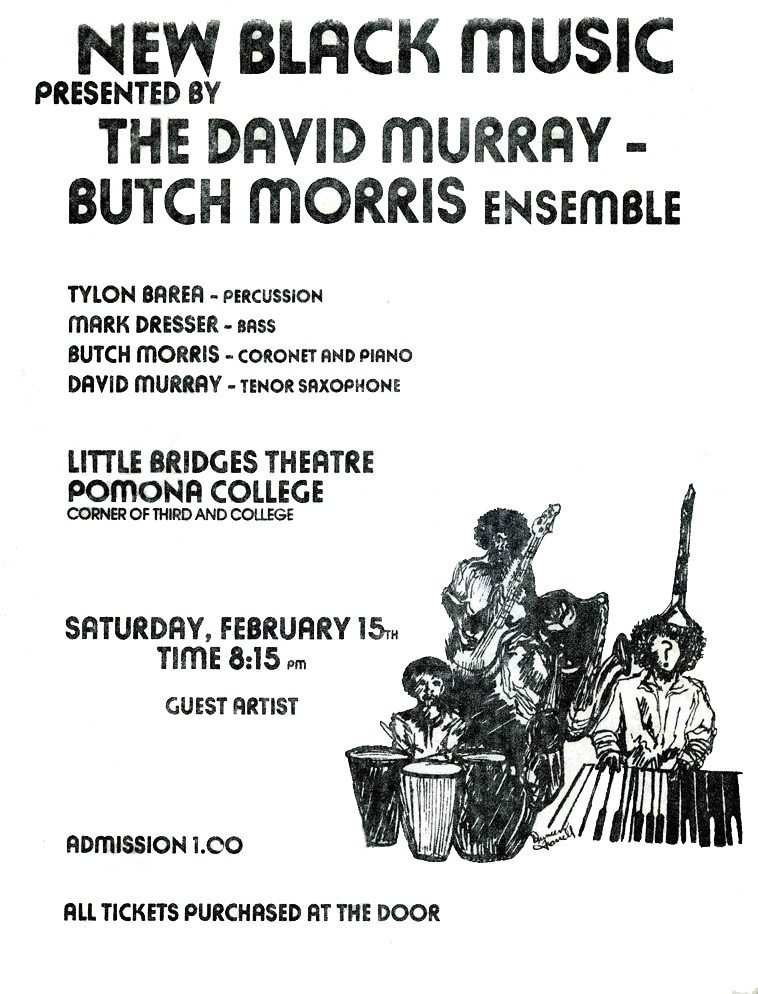 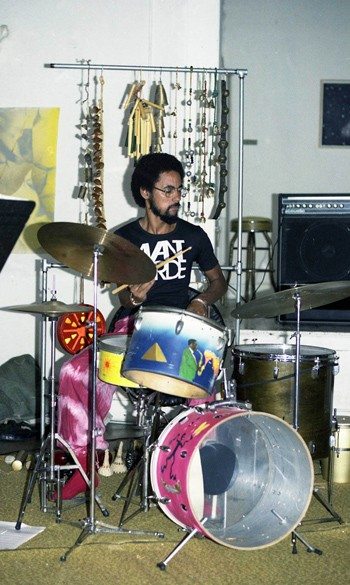 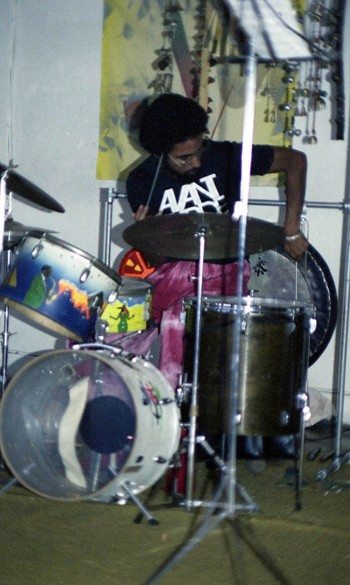 Butch’s life long exploration of the unknown produced amazing musical works and creations of sonic sorcery during his journey to the masterpiece that is Conduction. Now through his book the legacy of his work will continue to enlighten and inspire. The Art of Conduction. Conduction® Workbook by Lawrence D. “Butch” Morris (edited by Daniela Veronesi : J.A. Deane : Allan Graubard) ***Coming Summer 2015*** — J.A. Deane 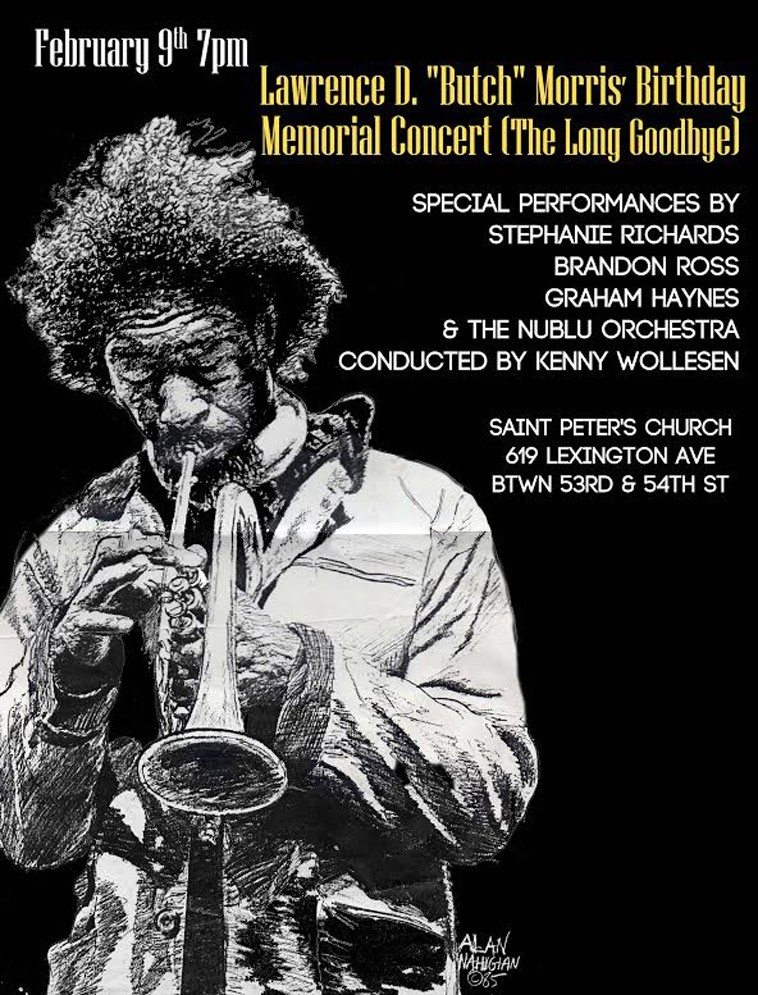 Two years ago the music world lost an incredible creator and innovator, a man well ahead of the curve. On this night, February 9th, 2015, we — his friends, fellow artists & family — honor the maestro on what would have been his 68th Birthday.