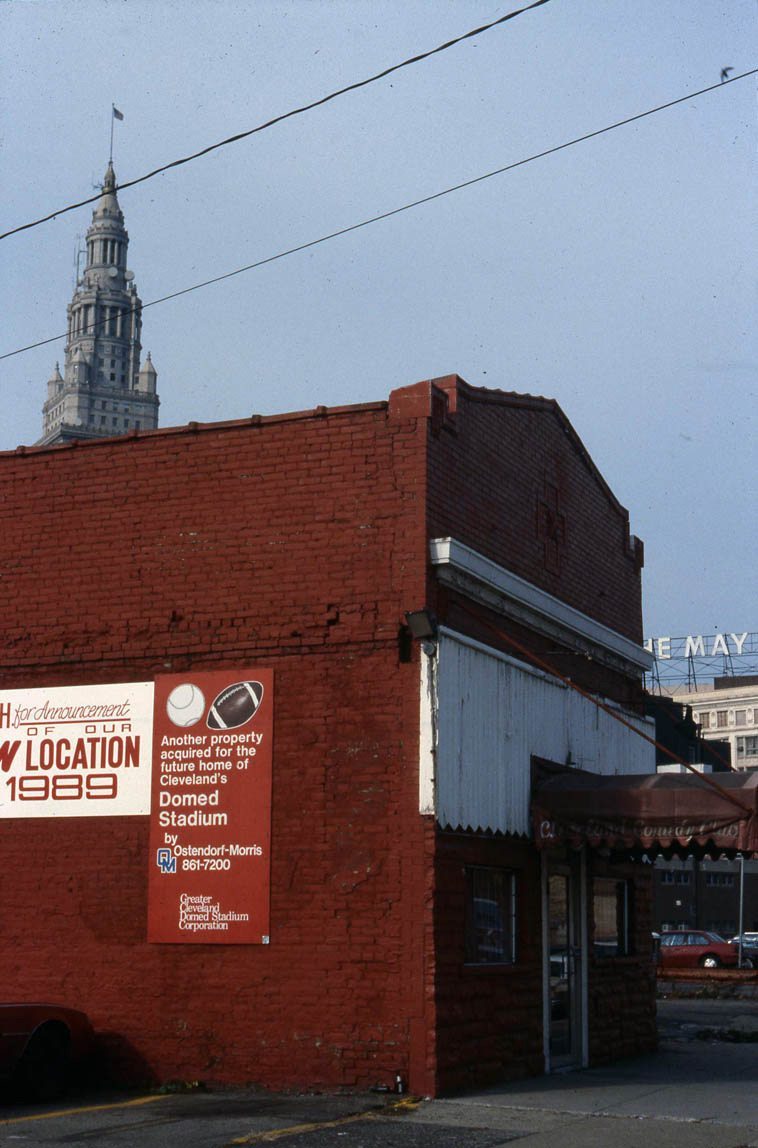 The Modern Jazz Room, 2230 E. 4th Street (at Huron), downtown Cleveland — there’s a parking lot there now I understand, the marquee in this shot says Cleveland Comedy Club, but from 1957 to 1961 the jazz artists that worked there is staggering, and for a couple years before that the spot was known as The Cotton Club, with players like Art Tatum, Jack Teagarden, Bud Powell, Mingus, Jay & Kai, Sonny Rollins, too many to list, Clifford Brown & Max have recordings from this club — photo by Mark Weber — November 26, 1988

If you had to define jazz in one sentence:
It’s all about time and the displacement of time.

If you think about it, even
the craziest arrhythmical rubato
non-time things can be written out
in time —-

In the grand scheme of things
everything is “in time”
and
space . . . .

Cal was telling me the other day
that probably Charlie Parker would be the most
extreme example of the subdivisions of time,
dividing the beat as intricately finite as 1/64th.

I said how I have a theory that Bird could
slow time down in his mind whereby he could
see all of those subdivisions in slow motion. 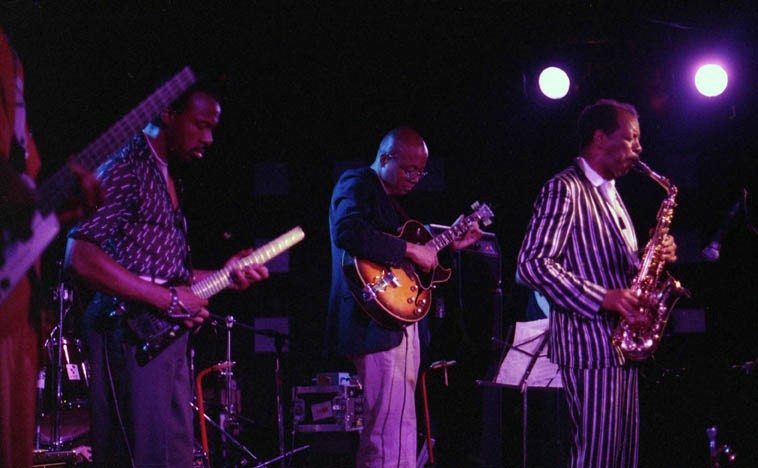 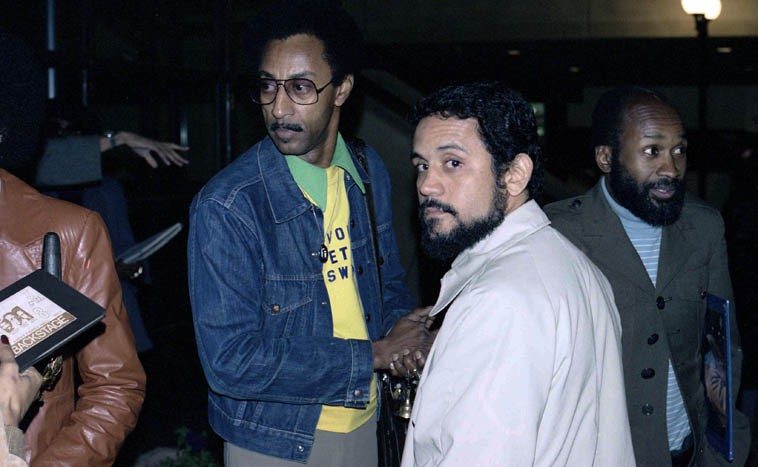 Roberto Miranda with band members of Vous et Swing: Richard Davis, the trumpeter, far right, and the leader Ron Jefferson with glasses (the guy in brown leather jacket holding an alto is Gary Bartz) — photo by Mark Weber — Los Angeles — April 22, 1978 —- Roberto has played bass for Bobby Bradford since Lincoln’s Gettysburg Address (which we’ll listen to today in a hipster rendition by Lord Buckley), the first time I ever heard Roberto he was subbing for Mark Dresser in Stanley Crouch’s Black Music Infinity in May of 1975 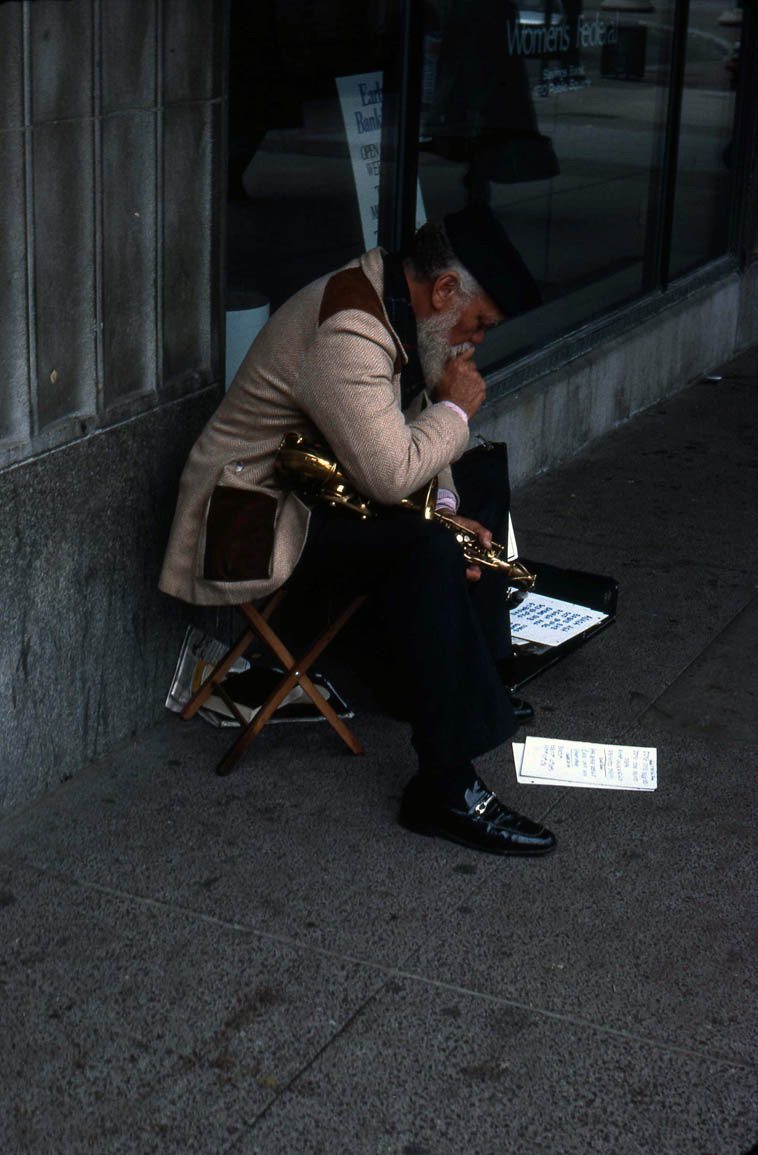 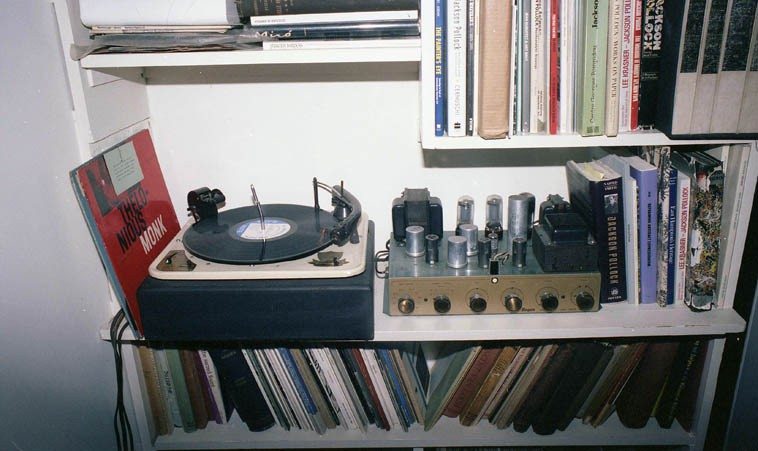 Jackson Pollock’s record player —- When Janet’s sisters asked me if I wanted to go see Jackson Pollock’s house in Springs, New York, I was already sitting in the car before the last words got out of their mouths —- I used to be a fanatic about Jackson Pollock’s paintings and wrote a big long paper in high school for my psychology class on his work (got an A!) —- Jackson was a jazz head, frequenting jazz clubs on Manhattan, and collecting records (the lower shelf, not in this image, has about a 150 records) —- I asked Fred Cohen if that edition of Monk was on the streets in 1956 and he said most certainly, which means that was Jackson’s copy! (Fred is the author of BLUE NOTE RECORDS A Guide For Identifying Original Pressings)—- those books in the photo are obviously of another vintage —- Jackson died not far from this house: 530 Fireplace Road, Springs, Long Island, on August 11, 1956 — his wife Lee Krasner lived there for many more years after Jackson ran into that tree —- photo by Mark Weber — July 1, 1995 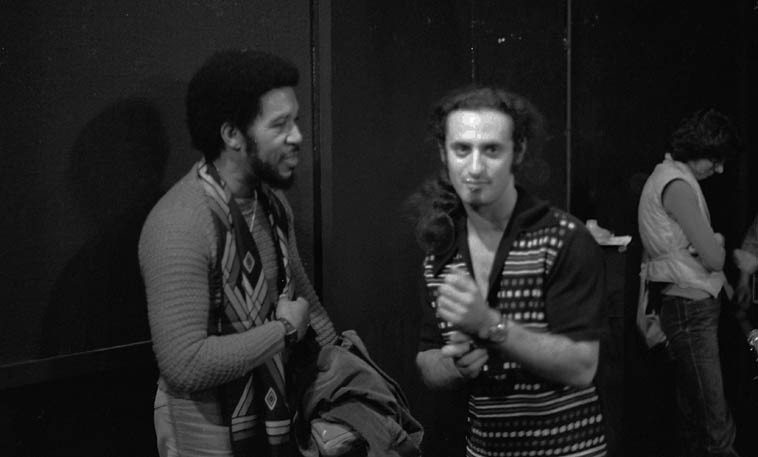 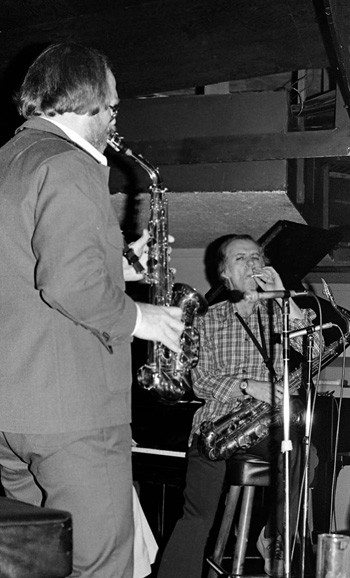 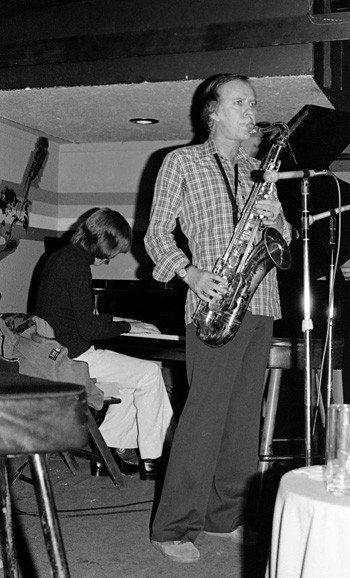 Gary Foster and Warne Marsh — When I came on the set in the early 70s the only Warne records readily available were NE PLUS ULTRA (Revelation) and RELEASE RECORD, SEND TAPE (Wave), and those two labels had a few more but these two became my all-time favorites probably because I played them so much (Now I have 4 feet of shelf space on Warne and some of those records get minimal play simply because of the quantity) — photos by Mark Weber at Donte’s — February 6, 1977 —- Gary Foster, alto saxophone; Warne Marsh, cigarette; Alan Broadbent, piano (the photo with Warne playing is the full-frame of the cropped image used on back of Lp HOW DEEP/HOW HIGH (Interplay, 1980) AND on the front the artist David Stone Martin made one of his superb line drawing masterpieces derived thereof ) — There were no re-issue programs going on in those days so all of Warne’s earlier things from the 50s were not around, but we did have the legendary 1949 Capitol recordings with Lennie Tristano on the Lp CROSSCURRENTS 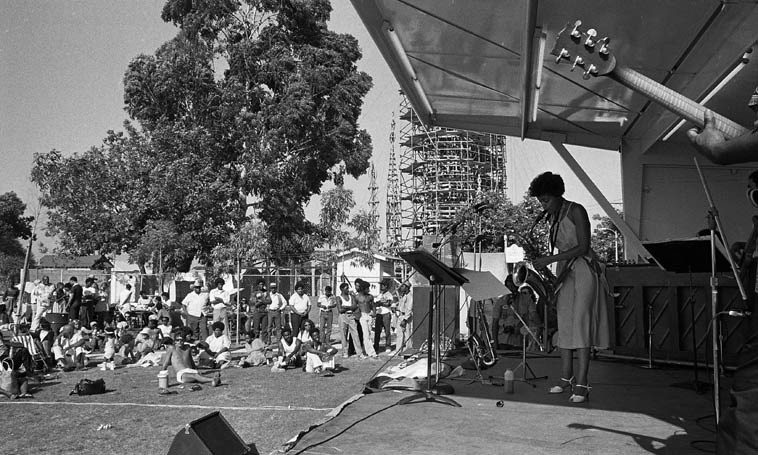 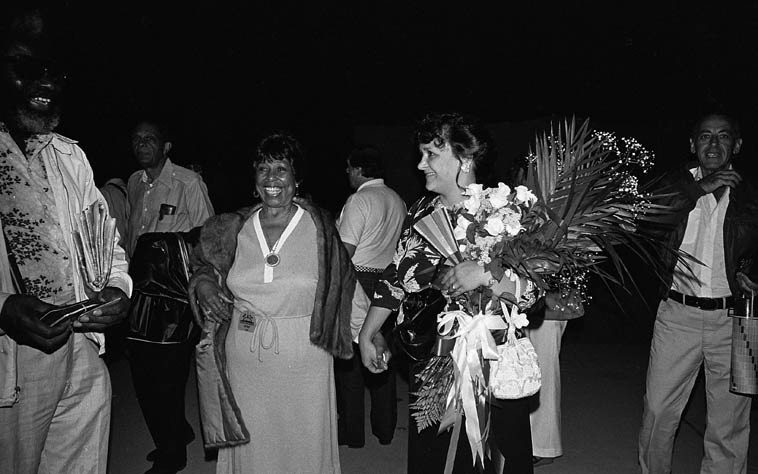 Helen Humes — my all-time favorite version of “Stardust” is a Jerry Newman location recording of Helen Humes at Minton’s — 1941 — with Don Byas and Thelonious Monk (Byas and Helen were members of Count Basie Orchestra at the time, must have been off the road for a minute) — her voice is liquid magic and as Dan Morgenstern points out in the liner notes Byas tenor was influenced by Coleman Hawkins but “was clearly his own man by 1941 . . . the first notable characteristic is his sound, one of the most voluptuous . . . . [also] his suppleness of phrase . . . mastery of the changes . . .” — photo by Mark Weber — Hollywood Bowl, June 20, 1981—- this shot looks like I was using a Speed Graphic! 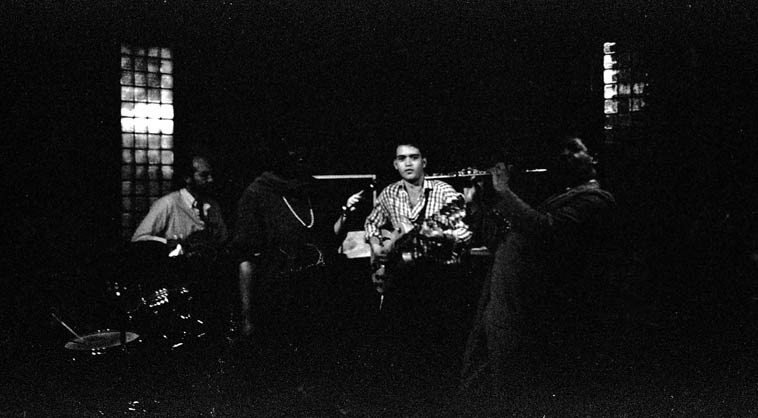 James Newton sitting in with Bob Ferrazza Trio at Club Isabella, Little Italy, Cleveland — October 18, 1986 — I was living in Cleveland at the time and James came to town to perform as a feature with a small jazz orchestra at Severance Hall this night and afterwards we hit the clubs, after we closed Isabella I took James to an after-hours club in Kinsman (neighborhood Albert Ayler grew up in) and he sat in with the legendary organist Eddie Baccus —- I don’t know why this negative has deteriorated so badly, but I felt the subject matter worth seeing, Bob is a music teacher at Oberlin —- photo by Mark Weber 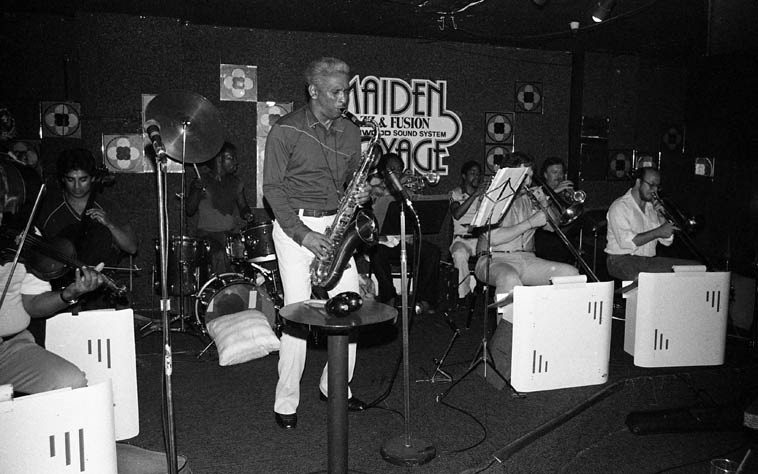 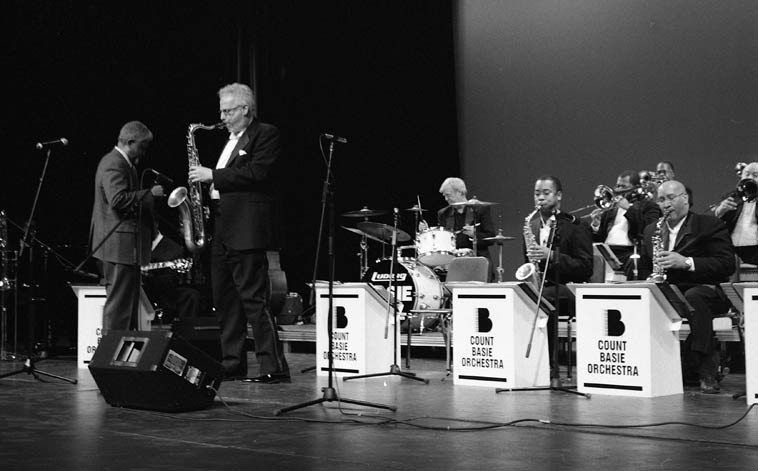 I wonder how many times Doug has played “Chelsea Bridge”? Local home boy makes good — Doug Lawrence with the band he always dreamed about joining while growing up in Albuquerque — “Chelsea Bridge” was Ben Webster’s show piece and now it’s one of Doug’s features, he played it picture perfect this night, breathless —- March 8, 2006 @ Rio Rancho High School Auditorium full to capacity — The Count Basie Orchestra under the direction of Bill Hughes — photo by Mark Weber 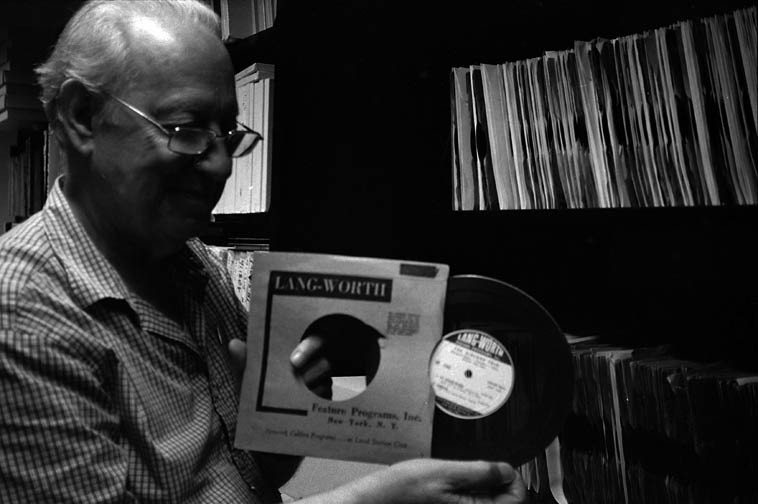 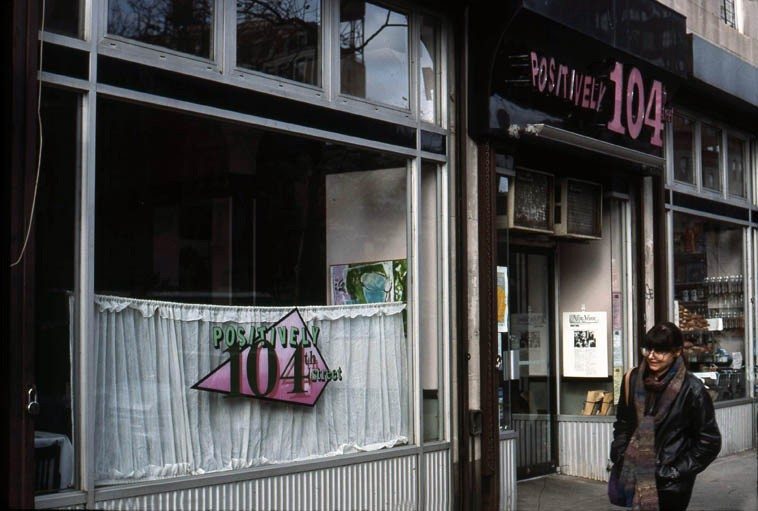 If you don’t like Bob Dylan’s songwriting you’re in serious need of a tune-up — He’s also quite a scholar on songwriting, as well, I think I’ve read his book CHRONICLES forty-six times, how can one person be so talented? I hope he writes Vol. 2 —- Anyway, he’s recently released a CD where he’s singing jazz standards, with his countrified road band, and unlike some of his recent albums his voice is not buried in the mix, SHADOWS IN THE NIGHT it’s called —- I love this band of his, a couple years ago on the Grammy Awards they piped in a live video of his band, and the next week in the papers a columnist asked: “What song was Dylan singing and what song was his band playing?” I cracked up, funny, because I get where the guy was coming from, but, a jazz listener would have never made that statement, that band is Out, way out! What a great band. Photo by Mark Weber — December 1988 — Broadway & 104th Street, Manhattan — we’ll listen to a Dylan track followed by Helen Merrill singing Hank Williams’ “I’m So Lonesome I Could Cry” 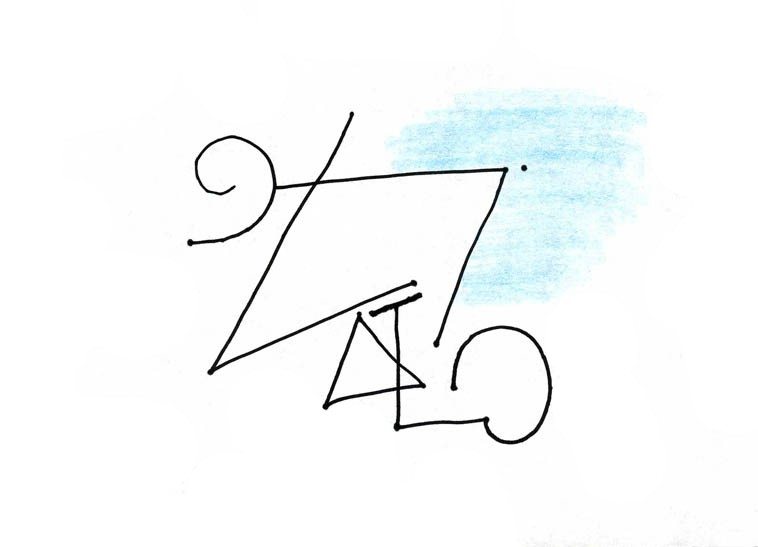