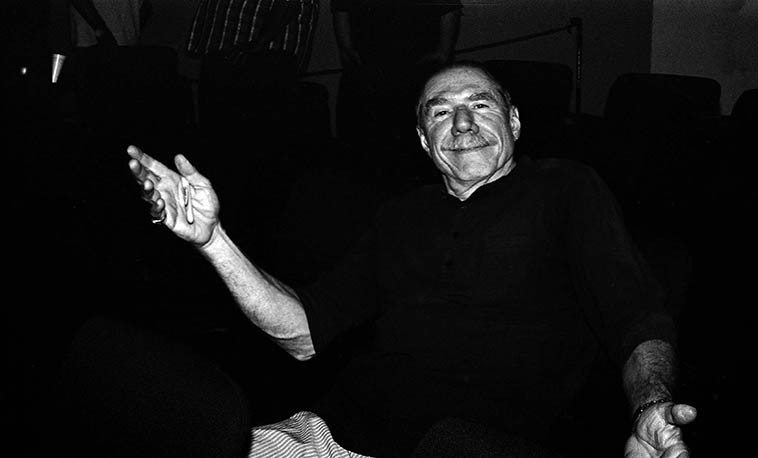 taken fast or slow
inside or out
up or down
hot or mildly tepid
jumpin’ and sweated
written down or blown off
exacted or off the cuff
knocked out or meticulously netted
poppin’ and crackin’
bifurcated accumulated amalgamated articulated
abbreviated silhouetted threaded and never regretted
moving along at a clip
always with a little zip
flip, flop & fly, zweet swat & try
we don’t take no jive
(except for fun in overdrive)
Bing bang BOOM, it’s jazz in the afternoon 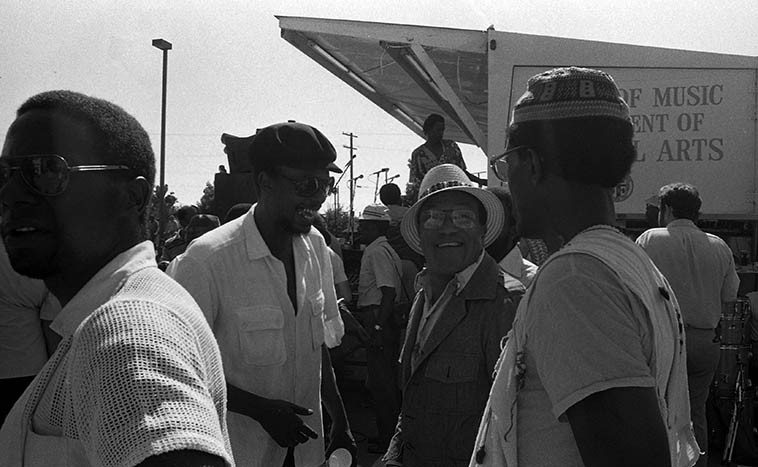 Horace Tapscott (laughing) and William Green (straw hat) — July 5, 1980 Watts Towers Jazz Festival — William Green was a legendary Los Angeles woodwinds master that everybody wanted to study with, he made a lot of valuable contributions to Buddy Collette’s records, we’ll listen to one of the few records he made under his own name —- photo by Mark Weber 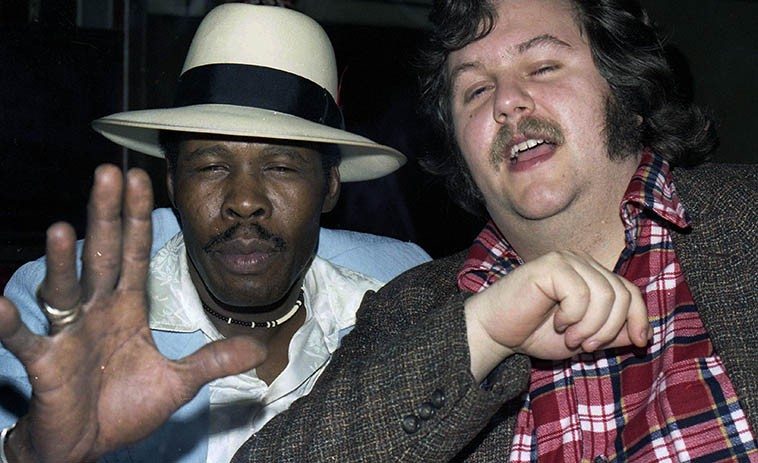 Mississippi Smokey Wilson and the new Friday KUNM noon jazz host John Breckow (Dig those sideburns!) — January 14, 1978 at Pioneer Club, 88th & Vermont, Los Angeles — photo by Mark Weber —– Smokey could tear a Stratocaster apart, just bring down thunder & lightning in that blues tavern of his down in South Central, it was a beer & wine joint with a pool table and a lot of atmosphere, he kept a bottle of Johnny Walker Red stashed for me when I showed up, and a couple pistols and a rifle under the bar (I can probably tell people now but his secret hideaway of cash was kept under the pool table, you could lift up the green turf and there was the cash) —- John & wife Dory moved to Corrales two years ago, he put in 25 years of radio on KPFK becoming part of late-night jazz history in Los Angeles, it’s going to be a kick to hear him again, we were old running buddies back in those crazy days, there was so much going on in Los Angeles . . . . 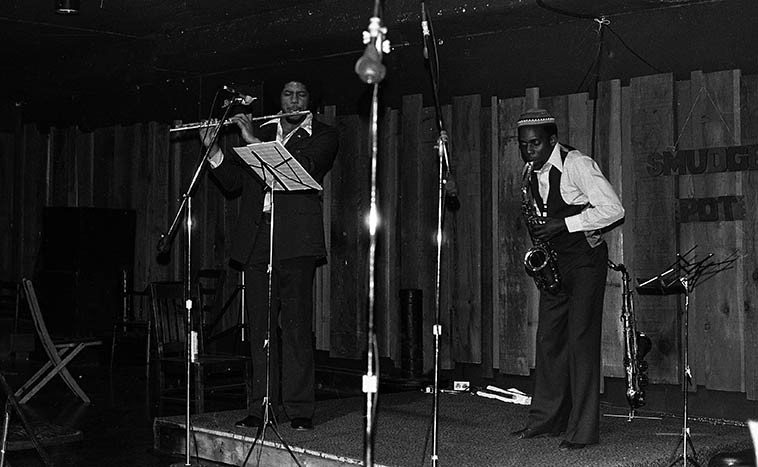 James Newton & David Murray —- two college guys giving a recital in the basement of the Student Union Building at Claremont Colleges, a little venue called The Smudge Pot —- January 15, 1977 — (this is David’s alma mater and on this night he was visiting having quietly graduated the year before when he moved to NYC to get into the action on the Loft scene) —- a record of this night’s music was released on Lp SOLOMAN’S SONS (Circle Records) —- photo by Mark Weber *Smudge pots were in use those years to warm the citrus groves thereabouts during the winter months 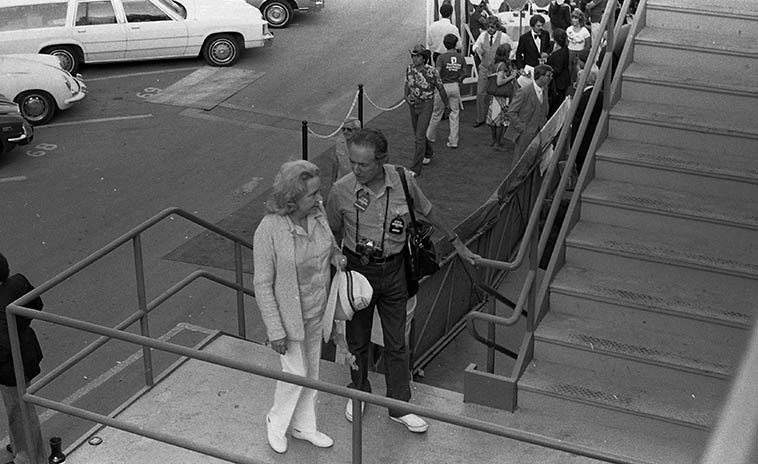 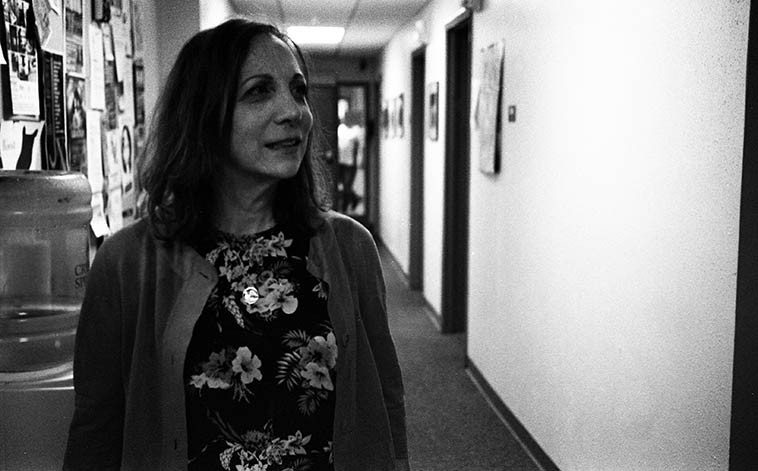 Andrea Wolper at KUNM Albuquerque — photo by Mark Weber — July 23, 2015 — Andrea gets deep inside a song, lifts it up into the air like a dirigible, opens a window, waves at us as she floats by . . . . 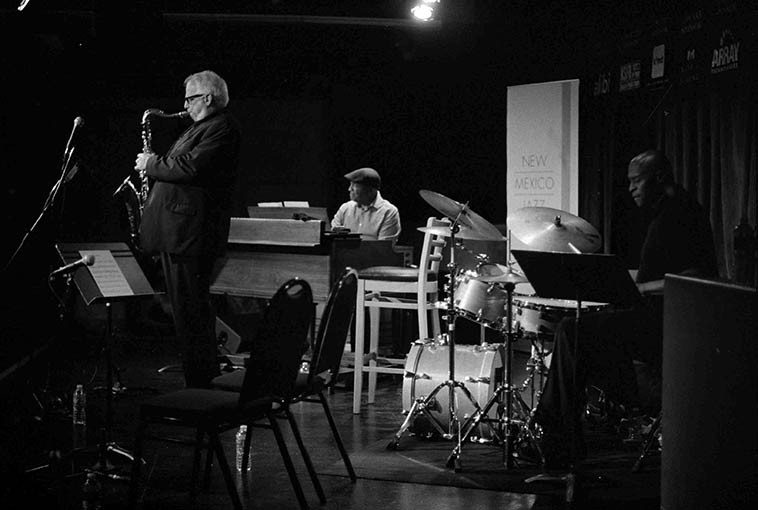 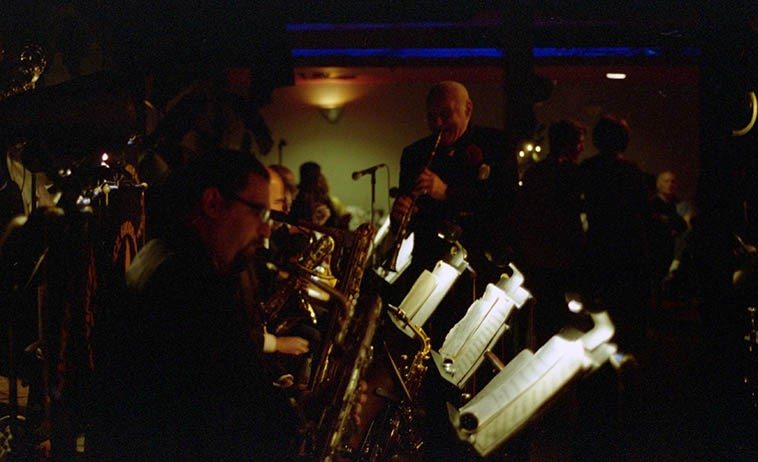 Sol Yaged sitting in with Vince Giordano Nighthawks at Sofia’s on 46th Street — May 5, 2008 — photo by Mark Weber 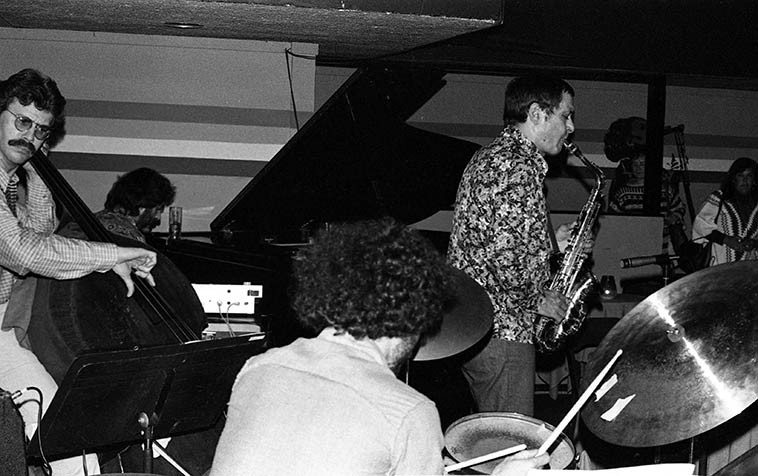 Art Pepper Quartet at Donte’s, North Hollywood —- April 27, 1977 — Joey Baron, drums; Bob Magnussen, bass; Milcho Leviev, piano — photo by Mark Weber —– Art used to rip a hole in the sky at Donte’s playing clear up to 2 o’clock and sometimes beyond, as John Breckow said one night, “Man, it’s like catching lightning in a bottle,” that was Art Pepper in the Seventies in Los Angeles, what a party. 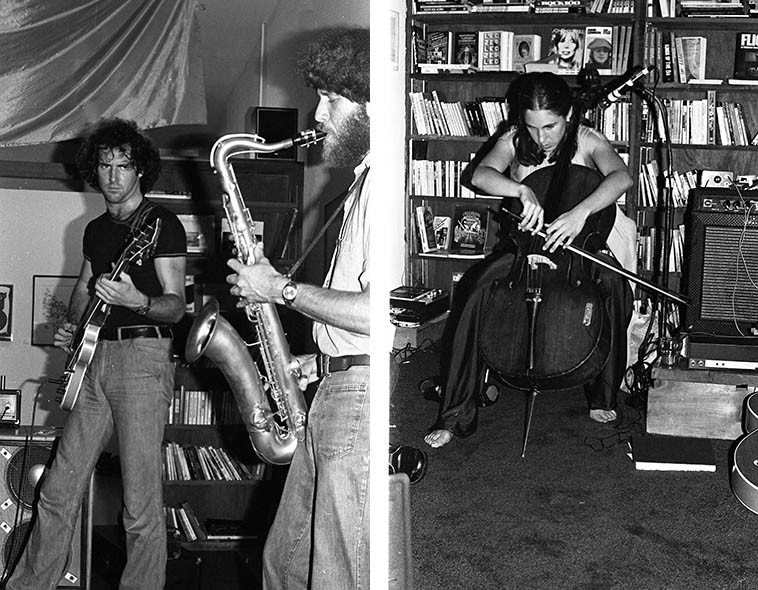 Henry Kaiser (guitar) & Laurel Sprigg (cello) & Henry Kuntz (tenor saxophone) —- I always loved the album they made ICE DEATH (Parachute Records) — they were a Bay Area trio that had come down for a few gigs around Los Angeles, these photos were at George Sand Bookstore — September 24, 1977 —- photos by Mark Weber —- On this same tour they played live on John Breckow’s KPFK radio show The Big Sleep, and John was not familiar with their thing (very avant — think Derek Bailey & Evan Parker) so, John had probably just spun a set of Joe Venuti and Bucky Pizzarelli — I was listening from the comfort of my home —- He told me later that when they started playing his head spun around four times on his shoulders as he held on to the dials . . . . 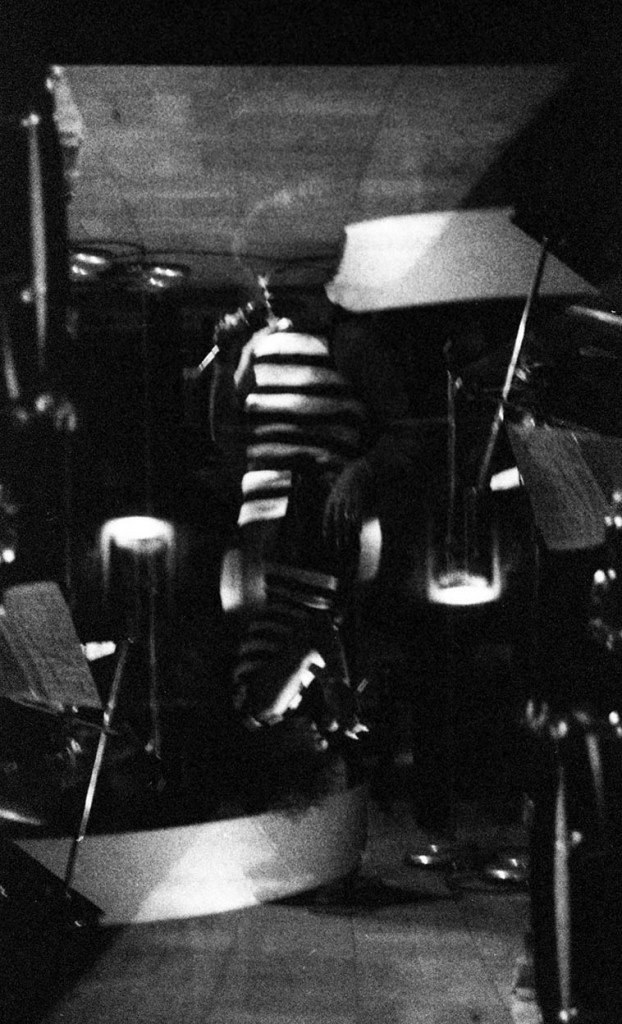 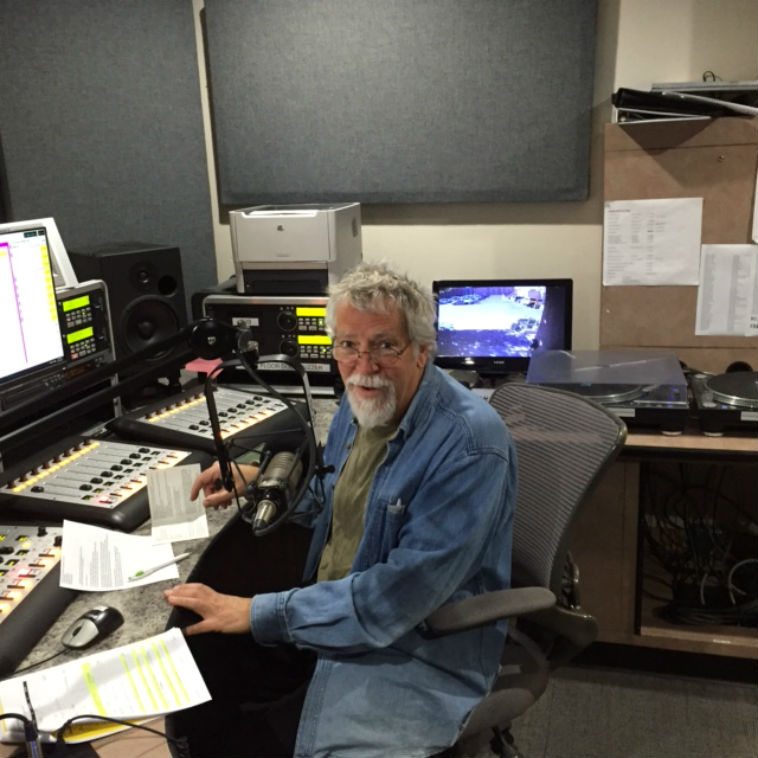