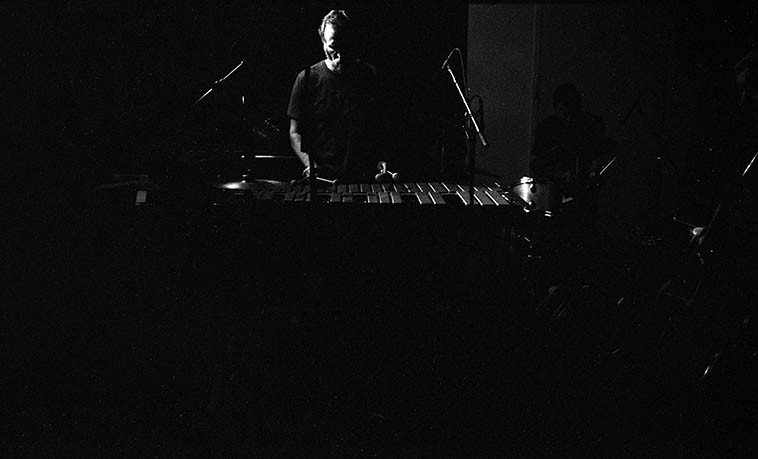 The first Ornette Coleman album I ever listened to was EMPTY FOXHOLE which was already a few years old by the time I found a copy, circa 1972, which has always amused me that this was my entry into his music, (it being one of the farther Out records he made, with his trumpet and violin in prominence).

What is the impulse to creativity? Whatever it is, our guest today has it in large measure: Kevin Norton. We’ll ask him what his first Ornette album was. We’re the same age and came into jazz at the same time, albeit on opposite coasts. We’ll be talking with him via telephone Live from New Jersey.

Kevin Norton fits perfectly that saying by Edgar Varese that Frank Zappa put on all his early albums: “The present day composer refuses to die.” (Sometimes with the hyphen and sometimes not) present-day being the active word. I had those records in my youth and that phrase never entirely made sense to me. I have come to believe the avenue to understanding the quote is to focus on “present-day” as it reveals itself to mean that the composer is in the now, working on present concerns of what is happening now. No easy trick. But, that’s what Mr Norton does in his considerable approach to music and his long years sticking to it. He is a composer as well as a player.

For what is composing?
Some of it is song.
Some are explorations of musical problems.
Some are platforms to find transport and release into improvisation.
But, what is song?
Where did it begin?
With chant? Yes, probably with chant.
And chant began as invocation?
But, before that?
Maybe as the ancient Vedas have it: the primordial sound of OM?

I seem to be at a stage of life where I’m wondering where everything came from? Kevin Norton is very articulate and thoughtful and probably can help me out about all this. He’s on faculty at William Paterson University and is scooting his schedule around to spend some time with us.

Kevin has been in the trenches, in the front lines, in the back lines, and the inside lines with jazz, making 30 records with Anthony Braxton between 1995 and 2003 qualifies him for special combat pay in the realms of the vanguard. He learned a lot from Mr Braxton. (The motto for my radio show comes from Anthony: “If we’re not having fun, count me out.”

One of the great chapters of jazz history is the Downtown Scene of the 1980s on Lower Manhattan. This chapter follows the chapter on the Loft Scene of the 1970s. And Mr Norton was there in the middle of the Downtown Scene. This was a music that exemplifies a phenomenon of jazz and that is that it absorbs everything in its path. The Downtown Scene utilized musical ideas outside of jazz, mostly from the “20th Century Music” category ie. Morton Feldman, John Cage, Steve Reich, Philip Glass, and before that everything that radiated out of the Viennese School of Schoenberg, Berg, Webern (no relation). There needs to be more anthropology and documentation on this Downtown Scene. I wasn’t there, I was in Los Angeles, so we’ll ask Mr Norton how it rolled out with him. 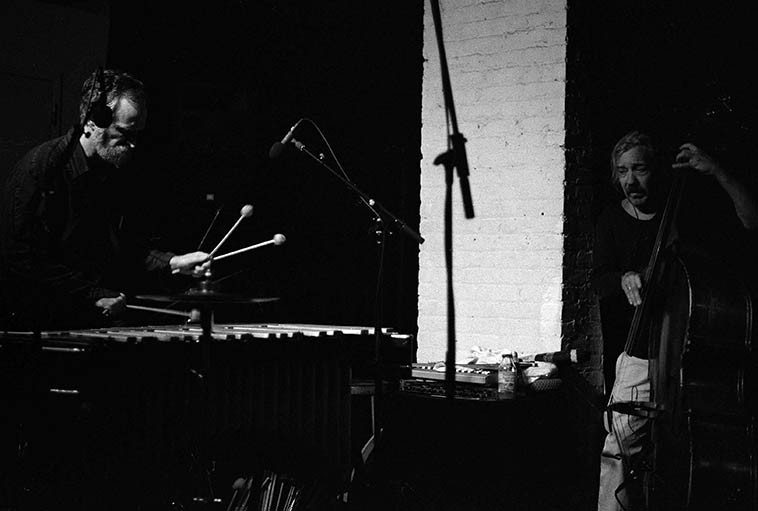 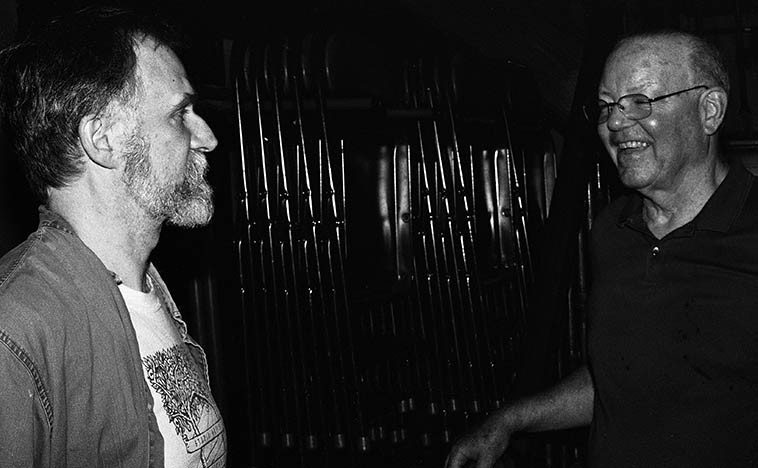 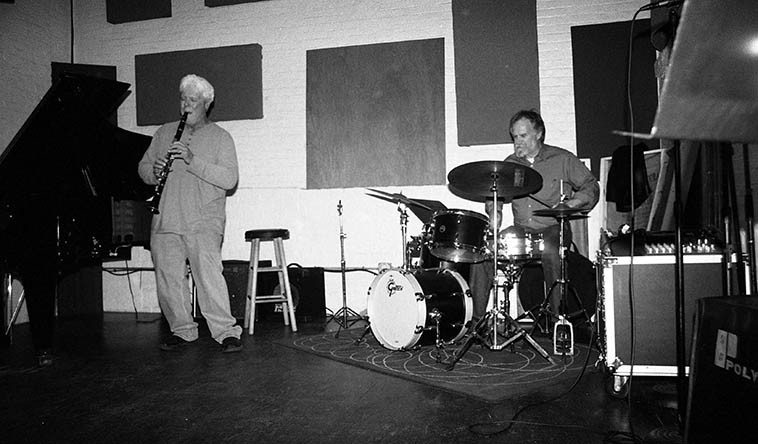 An evening of mixed configurations —- Carol Liebowitz had rented I-Beam for an informal jam session —- every kind of re-configuration was explored with the 20+ musicians, poets, dancers, singers, painters that showed up —– this was a trio with Connie Crothers on piano; Bill Payne, clarinet; Kevin Norton, drumset (this is the I-Beam studio set) —- May 9, 2o15 — photo by Mark Weber — it was 5 hours of music & dance on such a high level kaleidoscopic astrophysical paisley that I wish I had a million bucks to start a record company . . . . 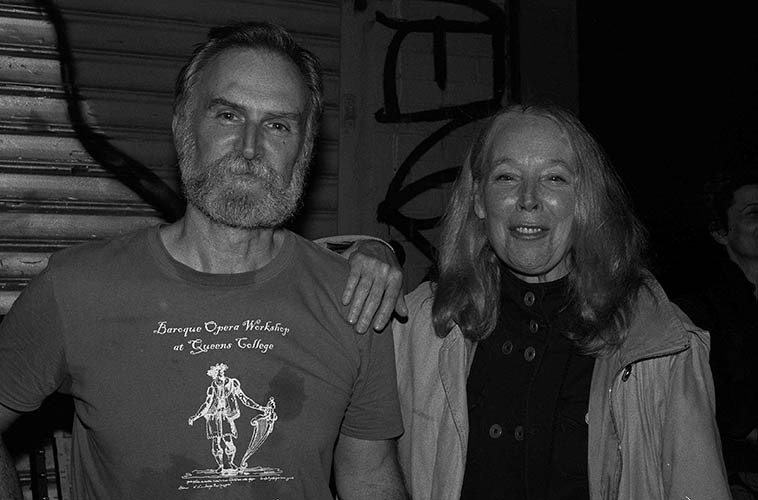 Kevin Norton & Kazzrie Jaxen outside The Stone on Lower East Side — August 22, 2o14 — Kazzrie had drove down from Callicoon to hear the Connie’s quartet that includes Kevin — photo by Mark Weber 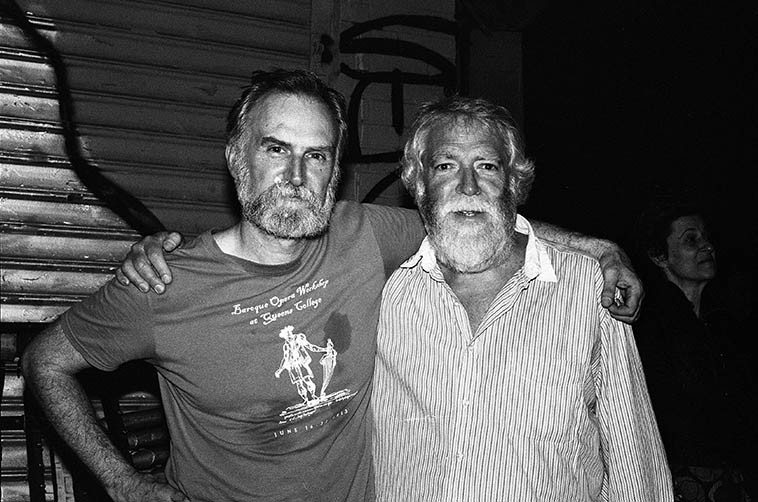 Kevin Norton after his quartet set at The Stone, and me (MW) telling Kazzrie where the shutter release is on my Fujica ST-701 —- August 22, 2o14 — photo by Kazzrie Jaxen 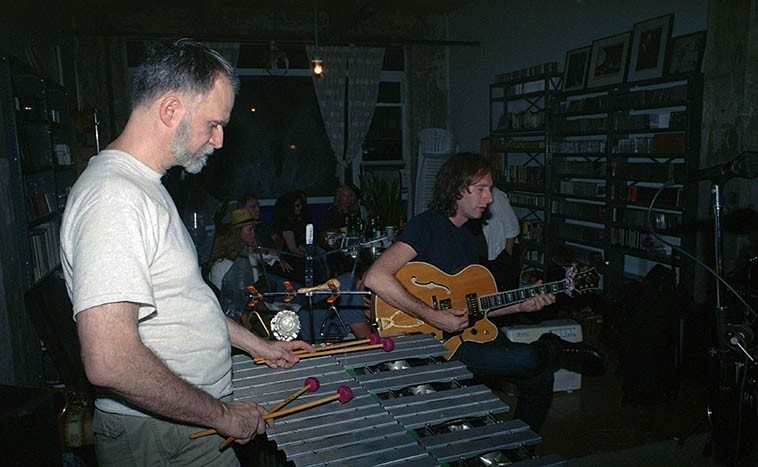 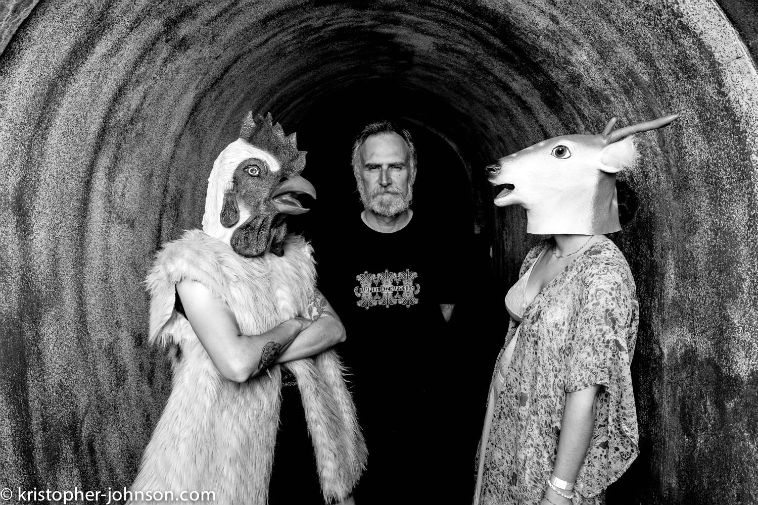 At the Lumen Festival on Staten Island, June 20 2015 – I was born in Brooklyn, NY, but the family moved to Staten Island when I was around 5 or 6 years old and I lived there until my college years. Most of the time I was there, I couldn’t wait to “get out” – but in recent years I’ve connected with some fantastic young artists, musicians, photographers, poets, dancers, etc. This is a photo of me and two of these artists (Jenna Synder, left, “chicken” and Julia Simoniello, right “deer”) and myself worked on a series of dance pieces choreographed by Florence Poulain and Florence’s husband Kristopher Johnson (a fantastic photographer, like you Mark) took the photo in one of the “ancient” underground walkways in Staten Island’s Snug Harbor. 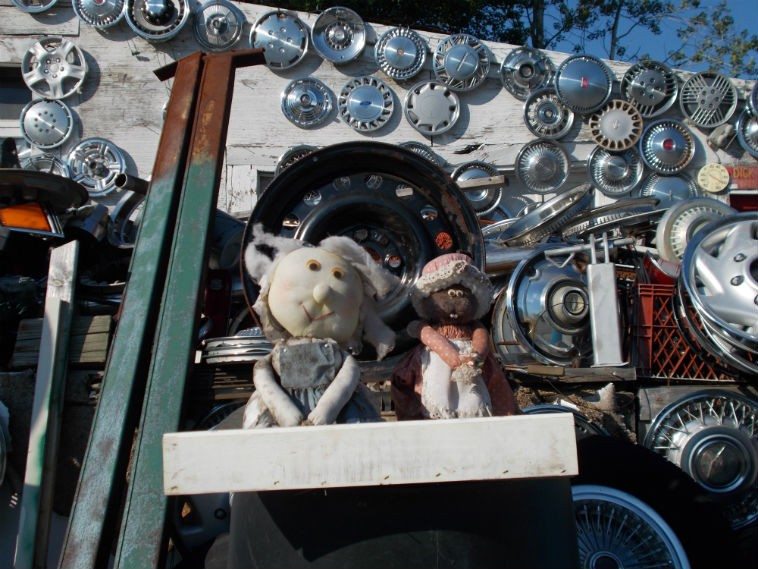 Hubcaps – reminded me of your “hubcapaphone” … Route 302 in Maine the road that travels East/West between Portland and the Bridgton/Sweden area where I’ve taught at Camp Encore/Coda for the past 10 summers. This hubcap store/museum has always fascinated me as I drove past either on the way to camp or to Portland, finally a couple of summers ago I stopped and took a few photos. — Photo by Kevin Norton 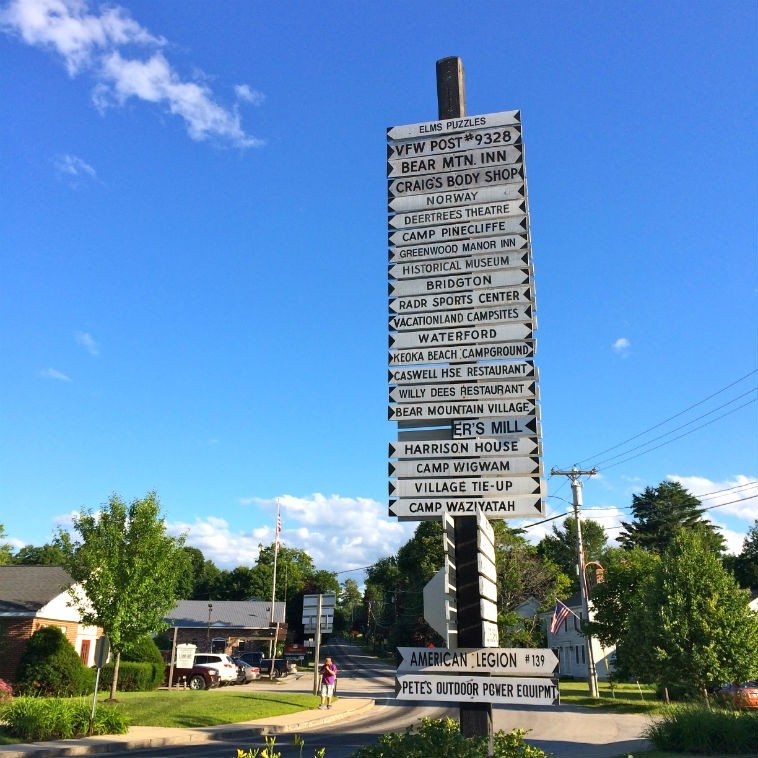 Signs – the “village crossroads” in Harrison, ME – around where I lodged at “Susan’s place” with Susan, Deb and Peter. The inclusion of Norway is not a joke, nearby towns are named Norway, Sweden, Denmark, Naples, Poland, etc. Many beautiful little towns with lots of ancient lakes, perfect settings for summer camps. — Photo by Kevin Norton 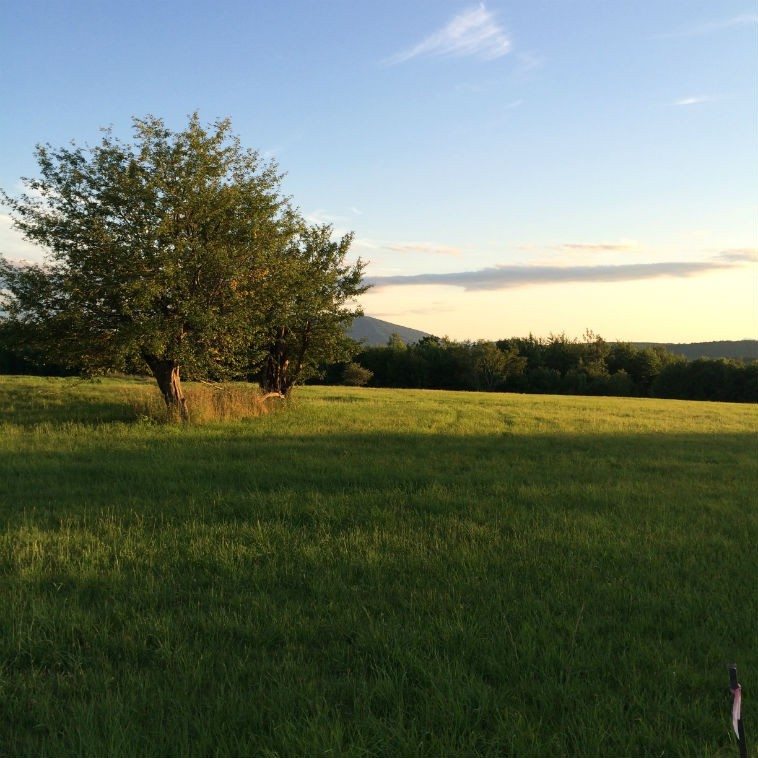 Beautiful Field just before sunset – Upper Ridge Road, Bridgton/North Bridgton, ME about a 1 minute from the camp, looking towards the White Mountains of New Hampshire. — Photo by Kevin Norton 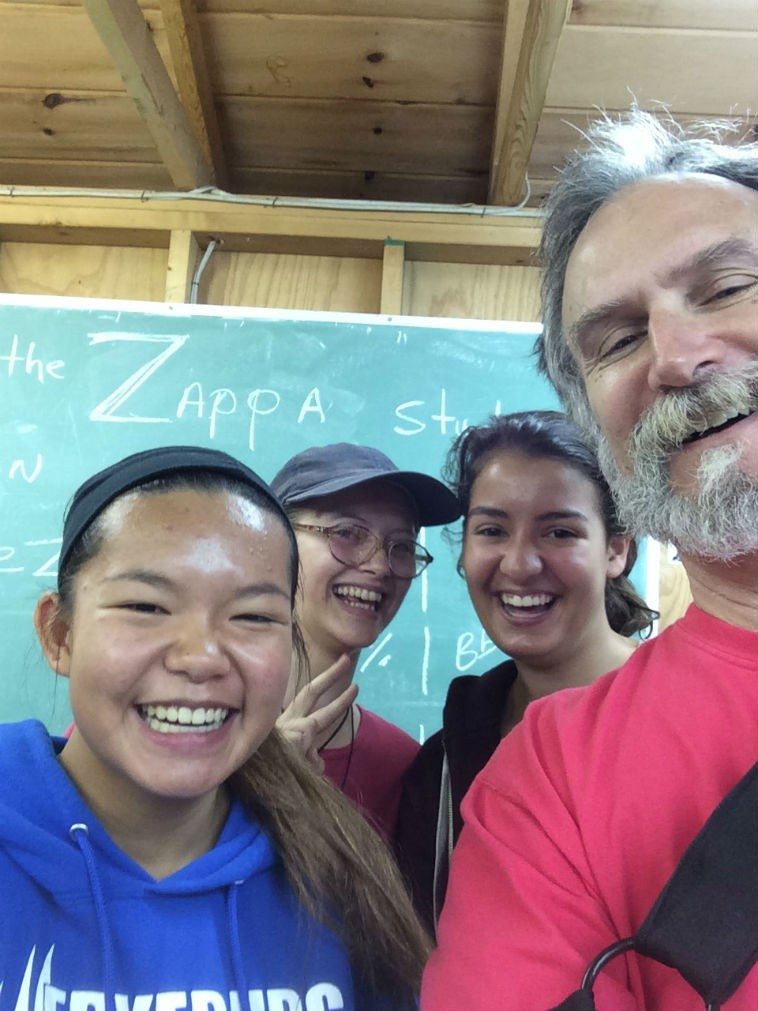 The “Zappa” Combo – Just one of the ensembles that I’ve coached at Camp Encore/Coda. This one was dedicated to the music of Thelonious Monk (it’s called the Zappa combo because we rehearse in the Zappa studio – all the studios on the camp are named after composers: Beethoven, Chopin, Ives, etc.) from left to right: Samara (sax), Tabatha (trombone), Dara (sax), Kevin (drums), missing Christian (bass). — Photo by Kevin Norton