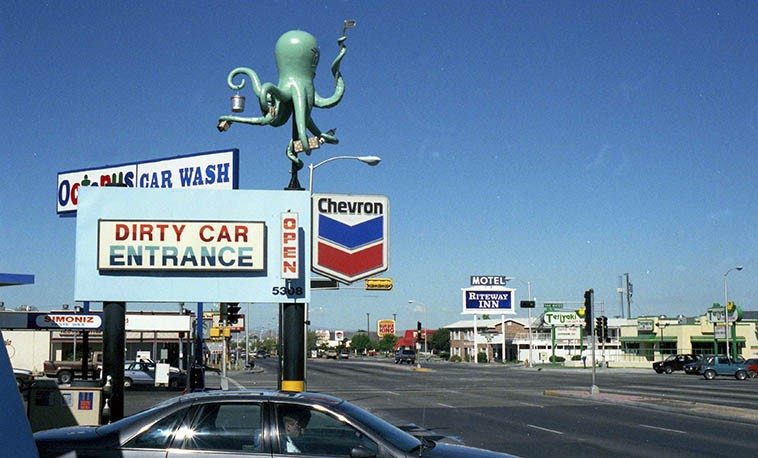 Octopus Car Wash — September 11, 1995 — Central Avenue (old Rt.66) and San Mateo, Albuquerque, (it’s no longer there, or anywhere) — photo by Mark Weber —– when Horace Tapscott was in town for a couple concerts we were driving past that car wash and Horace said, in his elliptical way: “I see. Car wash. Octopus really gets it done.”

I’ve been thinking a lot, lately, about contrivances in music: What is contrived rather than natural? What is real and what is smoke and mirrors? What is borne upon feelings and what is manufactured?

“All I know is that I pursue the object that will hold the answer to a question that troubles me, but such are the dilemmas by which we daily struggle, are they not?” — the fastidious and indefatigable Hercule Poirot  (David Suchet)

It’s a lot to ask of an artist musician to expect pure unadulterated honest statements every time they step on stage but in jazz there are various strategems to trigger pure creativity. Learning the music and mastering the instrument probably come second, after desire. Along the line you train your mind to let go and trust to luck. (Luck itself is an interesting concept, you come across it a lot in Northern European mythology.) I used to ask musicians what their minds were doing when deep off into an improvisation, which now strikes me as dumb question. They all answered that they had turned themselves over to the moment, which is something the psychologists call the flow state. What we call the Zone.

The Buddhists have long distrusted the activities of the over-active mind.

Consulting dictionaries:
Contrived: deliberately created rather than arising naturally [Oxford American].
To plan ingeniously, devise, invention by stratagem [Funk & Wag as redacted by MW].
To bring about by effect or by plan, forced, artificial, strained, concoct, to devise, mechanical [Webster’s].

I always come back to what Robert Creeley pounded into my head when he was on my show many years ago. Robert kept repeating: “What is useful?” “How can we make it useful, Mark?” “What is necessary, what use is it?” 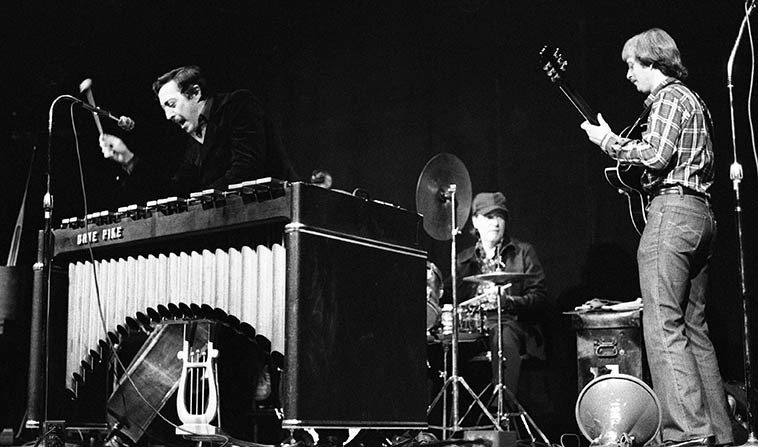 When I was coming on the set, Dave Pike was all over Los Angeles (jazz) radio, in fact, this shot comes from a live KKGO broadcast from Kinsey Auditorium, Exposition Park, Museum of Science & Industry — January 11, 1981 — Ron Eschete, guitar; Luther Hughes, bass; Ted Hawke, drums; Tom Ranier, piano & alto saxophone; Dave Pike, vibraphone — photo by Mark Weber — (“coming on the set” is an idiom I learned from Horace Tapscott who used it often to refer to a person’s entry into the jazz world of Los Angeles, or, as Horace pronounced it: Los Angle-eez) 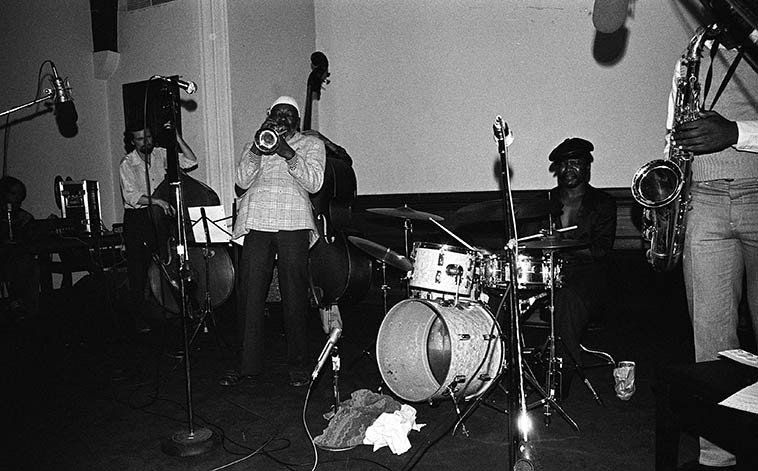 This band really hit hard, coming out of Oakland, I wish there were recordings available, they knocked me out: Robert Porter Quintet — February 14, 1981 at The New College, San Francisco — Paul Stephen, sax; Smiley Winters, drums; Nantambu Mwanga & Bill Douglas, basses; Robert Porter, trumpet — photo by Mark Weber ——- I remember catching a plane the next day back to Southern California hearing the news that Michael Bloomfield was found dead in his car on the backside of the Haight 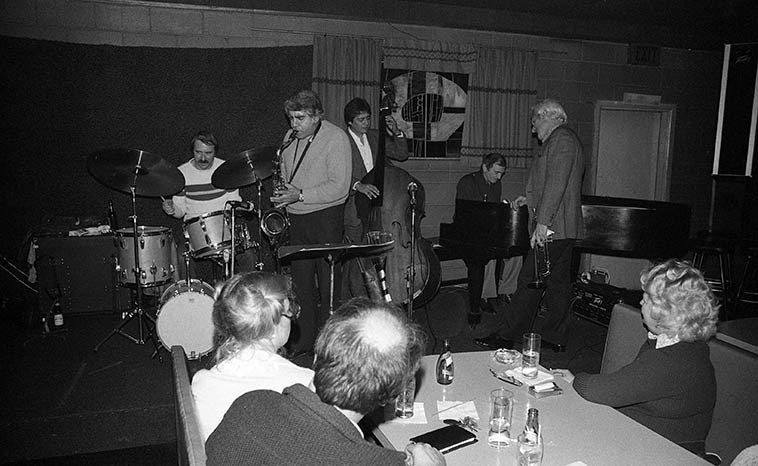 Conte Candoli Quintet — March 29, 1981 @ Gilberto’s, Cucamonga, California — Larry Covelli, tenor sax; John Dentz, drums, Frank DeLaRosa, bass; Frank Strazzeri, piano; Conte Candoli, trumpet — photo by Mark Weber —- a little spot way out on Rt. 66 about an hour east of Los Angeles that had Sunday afternoon jazz, a tradition for us in the 9-5 working class, a little something to cool down before Monday morning back on the dreaded job . . . . 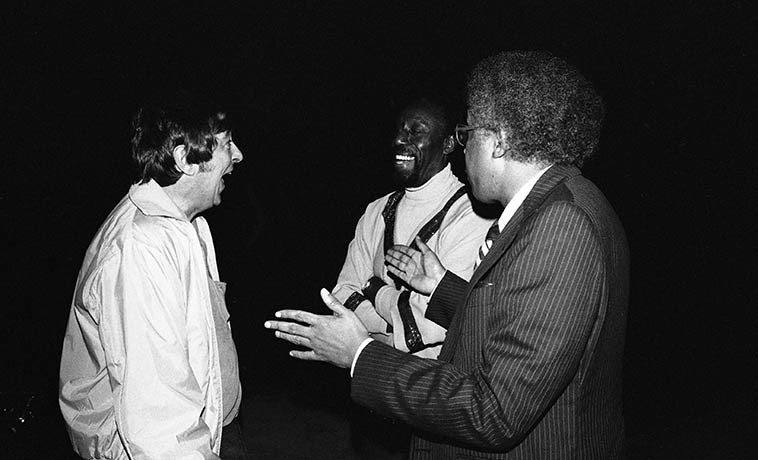 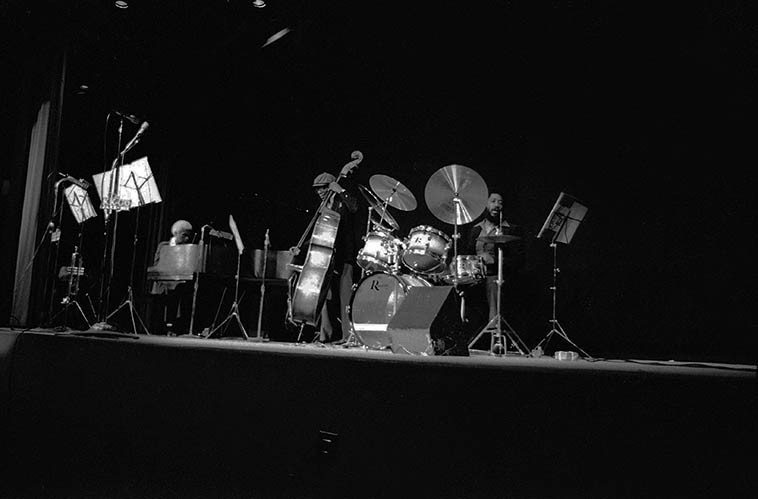 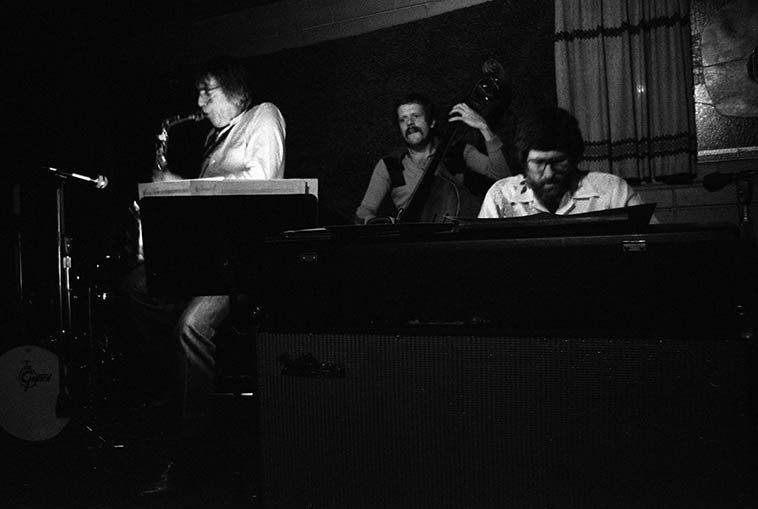 Bud Shank brought a quartet into Gilberto’s — January 18, 1981 — Bill Mays, piano; Bob Maize, bass; Jeff Hamilton, drums — photo by Mark Weber ———– In Bill Mays memoir STORIES OF THE ROAD, THE STUDIOS, SIDEMEN & SINGERS: 55 YEARS IN THE MUSIC BIZ (2o14) — a great read, Bill reveals that it was him playing “the critical opening notes of the song that a contestant would try to guess on the TV show NAME THAT TUNE” —– Bill Mays lived in Los Angeles in the 70s up till 1984 when he relocated to the Chelsea neighborhood on Manhattan (Sheila Jordan lives in Chelsea!) 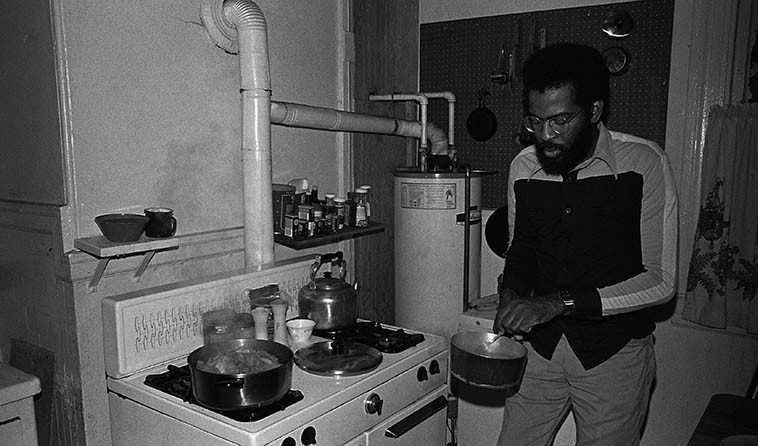 I laugh to see this photo, me N George went on a lot of capers together —- George is a St Louis trumpeter, where trumpets are a religion, he lived in San Francisco in the late 70s & 80s — he’s making us breakfast at his & wife Clara’s apartment in the Lower Mission, San Francisco, I was crashing at their place that long weekend for the New Jazz Fest that he was producing: George Sams, we’ll listen to some of his music on this show — photo by Mark Weber — February 13, 1981. 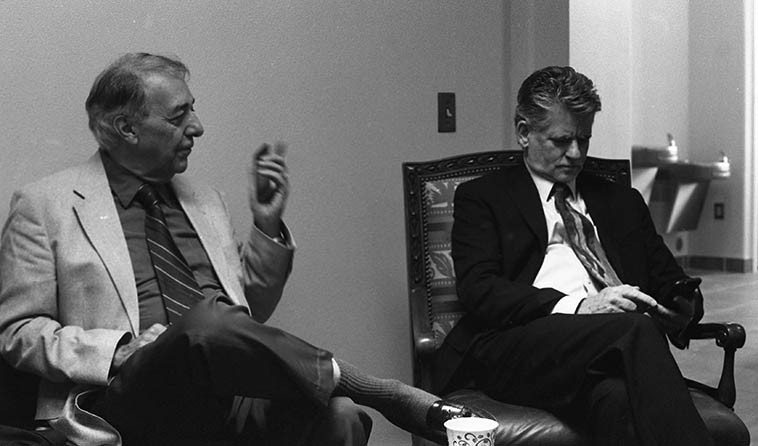 Waiting to go on stage: guitarist Michael Anthony and drums Cal Haines —- April 7, 2o13 — photo by Mark Weber —– Michael & Kathie moved to Albuquerque from Los Angeles in 1980, she was a dancer on the Carol Burnett Show where they met (Michael was in the studio band) and if you watch Flintstones re-runs that’s Michael on guitar there as well, also, he’s the guy playing that quaint ukulele on hit song “Raindrops Keep Falling on My Head” from movie BUTCH CASSIDY & THE SUNDANCE KID —– Cal once played percussion for Aaron Copland, a fact I never let him forget! wow 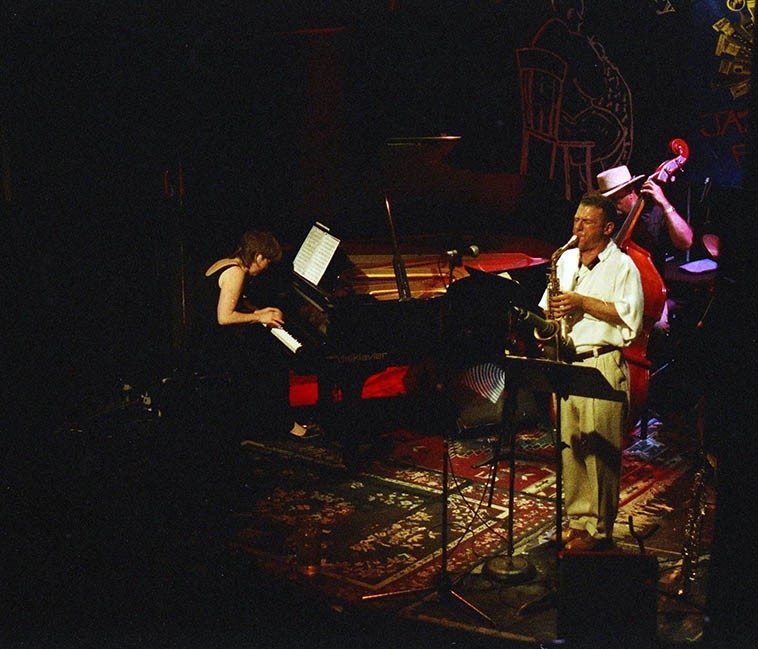 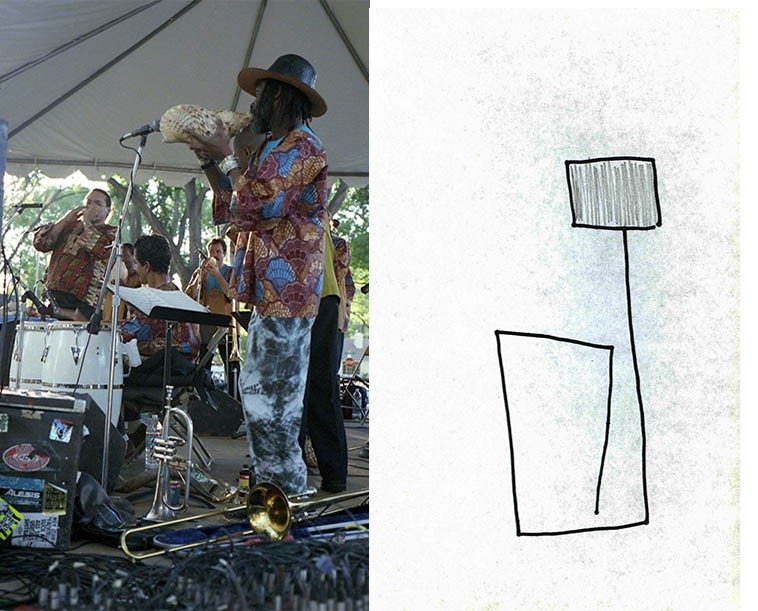 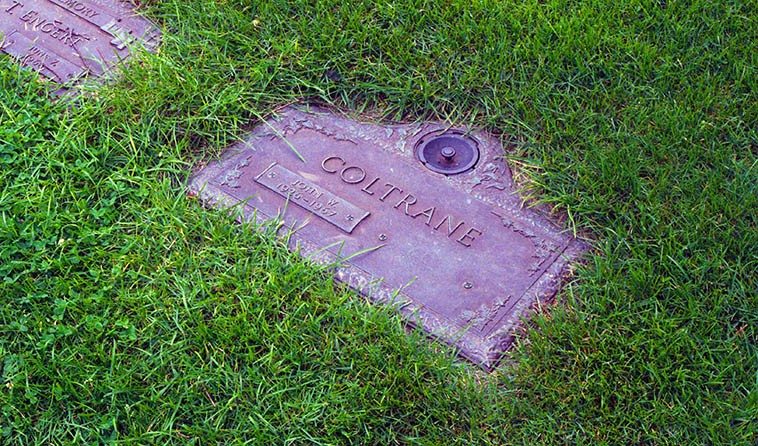 One of the great spiritual questers of our time —- laid to rest at Pinelawn Memorial Park, Babylon, Long Island, New York — July 5, 1995 — photo by Mark Weber 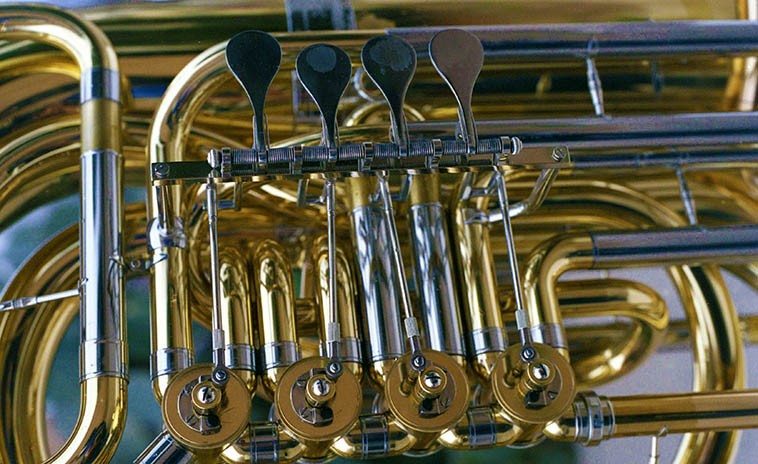 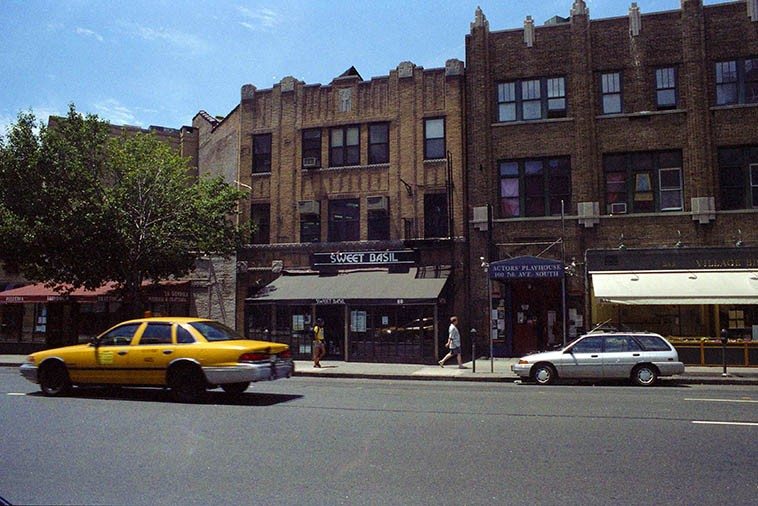