Forsooth, it is music that draws us near 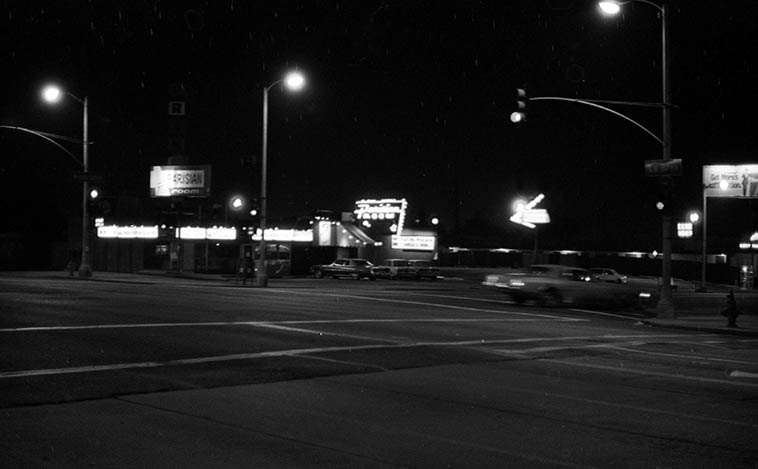 I wish this shot was a little less bleary so we could see who was on the marquee there at the Parisian Room, La Brea & Washington, Los Angeles (there’s a post office now where that great jazz club used to be) — February 10, 1980 — photo by Mark Weber

FORSOOTH, IT IS MUSIC THAT DRAWS US NEAR

Kenny Davern used to get so ticked off when people said he was playing “old-timey music,” it really irked him. (Most of his repertoire was 1920s & 1930s songs and some even as far back as 1890s — “Careless Love” and “C.C. Rider” ). I remember the time he hobbled out on stage at the Outpost like Gabby Hayes with his shoulders hitched up half behind him carrying his clarinet like a stick and at the mike he started talking with his lip folded over his teeth like he was gumming and spoke in a creaky voice about “Now, we’re going to play some of the good ol’ good ones . . . . ” Hilarious. Kenny was a hoot on stage.

He firmly and vehemently asserted that this was not a repertoire music or that it had anything to do with some fantasy of the past. He said many times on our radio show that “this is a living music.”

I took a telephone call last week during the show where the caller first complemented my selection of music, then he turned vicious and said, “I don’t know if you know it, but this is a lot of Mom & Dad music,” and I said, “Excuse me?” clunk he hung up. Well, more power to you, dude.  (I had been doing a show with a 50s vibe, somewhat cool west coast existential bluesy for a moody overcast day.)

I always tell listeners to trust me, I won’t do you no wrong. (It comes with the territory in radio to get these sort of calls from left field.)

Maybe communing with older recordings is a way to anchor the world’s headlong plunge into the delusion of progress?

Music and harmony shift focus over time, but there is no such thing as a progression toward something new and better. (Billy the Celloist can provide some backfill here, please.) I always dug Joachim-Ernst Berendt’s book THE WORLD OF SOUND (1983) where he explains in detail the myth of these ideas that there exists anything new in the science of harmony. That the prevalent harmony of any one era is just that: part of that era. He uses the example of Baroque music and how by some standards you could call it more “modern” than nowadays: all those concurrent lines going at once. (Butch Morris turned me on to that great book.)

I asked Janet if she thinks guys like this caller feel dumb after such a jerk of a phone call. She said, “No, Mark, they don’t.” I guess he feels like he scored some points in some cultural war of who’s hipper than who. Apparently, this “dad” pejorative is the new put-down that you’ll be hearing out of the mouths of jejune sheep for next few years until their masters give them a new word to bleat. 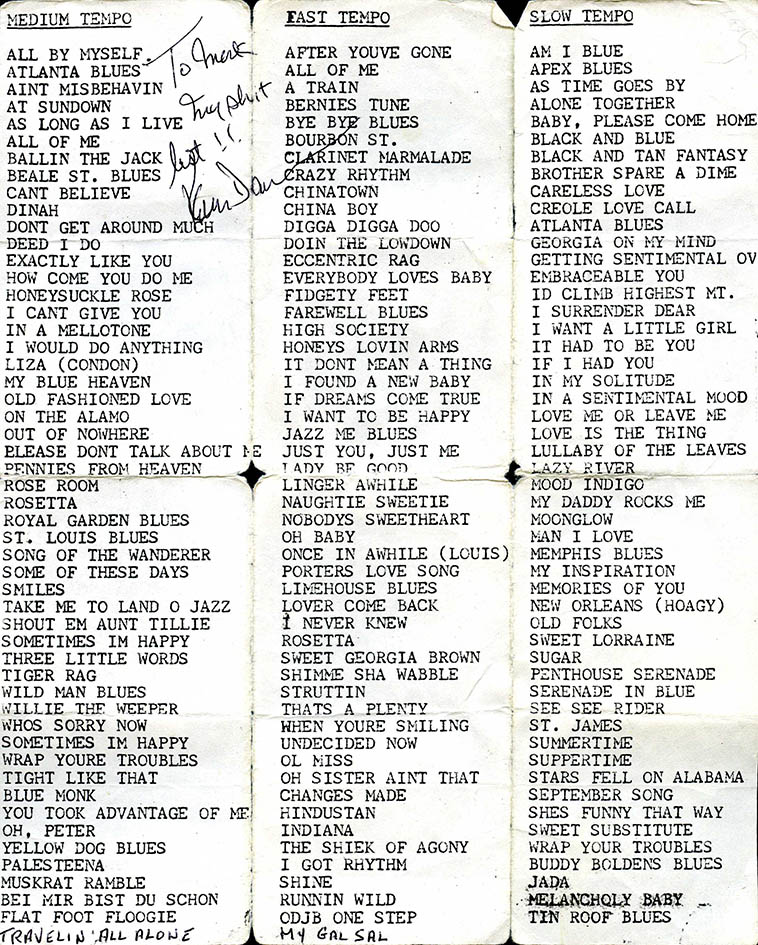 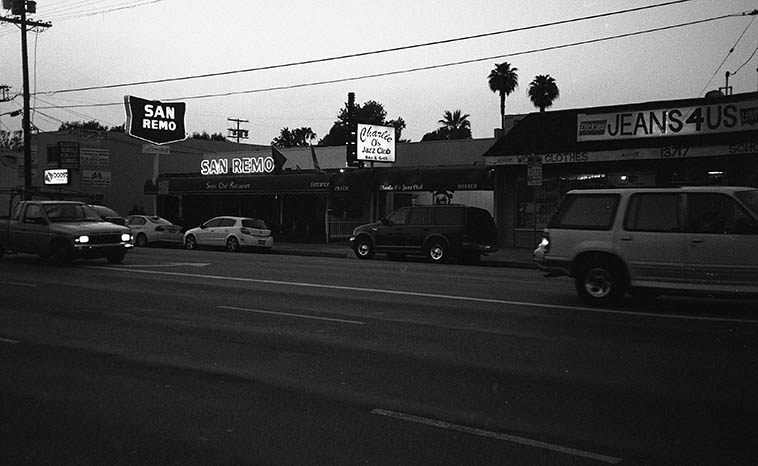 Charlie O’s in the Valley: 13725 Victory Blvd, Van Nuys, California —- What a great jazz club, although, it closed a couple years ago and it’s era didn’t overlap the years I lived in the L.A. area, the times I did stop by when in town were fantastic —- This night I was there to hear Lanny Morgan with a quartet — April 10, 2o10 — photo by Mark Weber 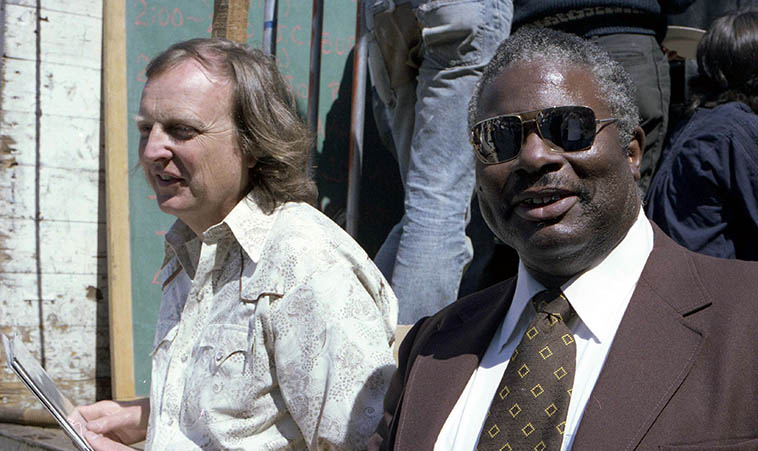 Chris Strachwitz and Big Joe Duskin — San Francisco Blues Festival — August 11, 1979 — photo by Mark Weber —– We’ll dig through the archives and find some of that fine boogie piano of the Cincinnati native Big Joe and put them on the air 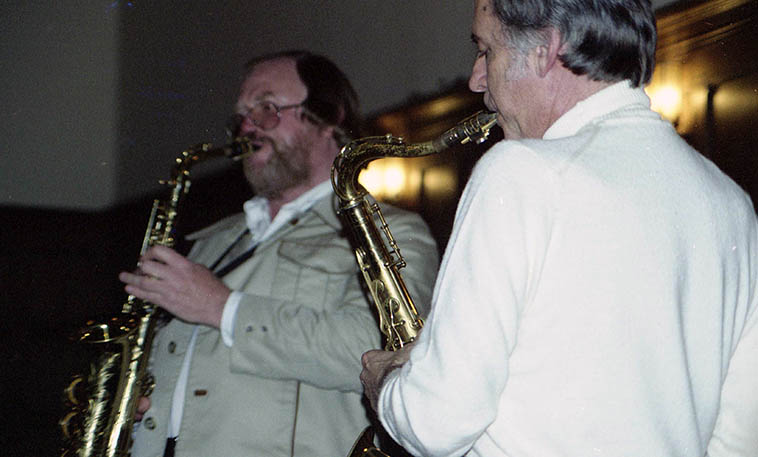 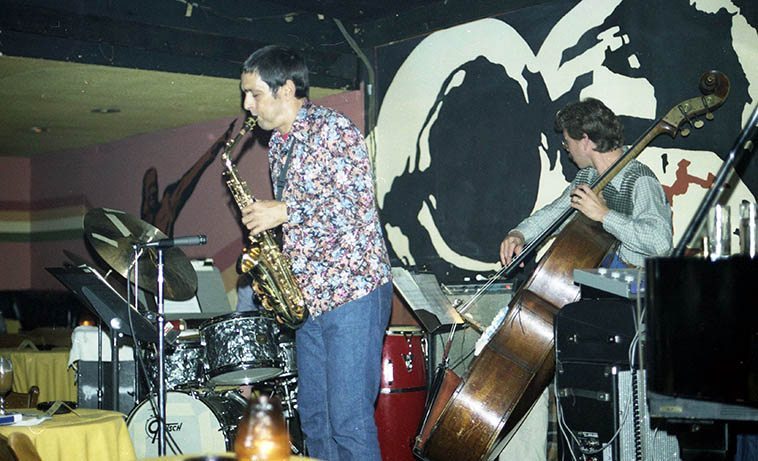 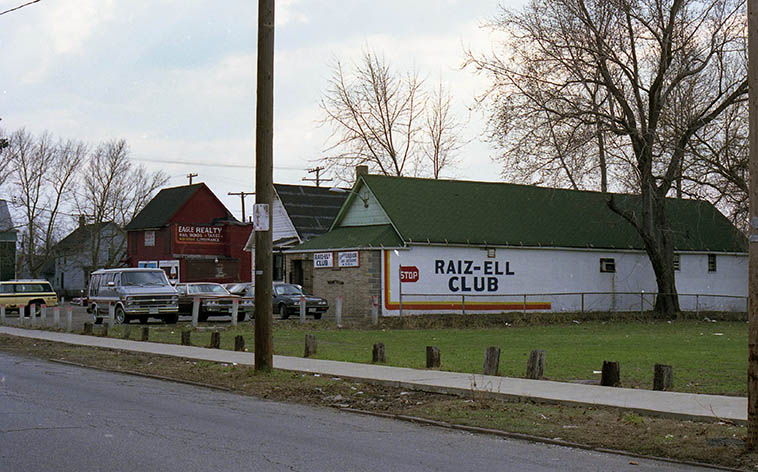 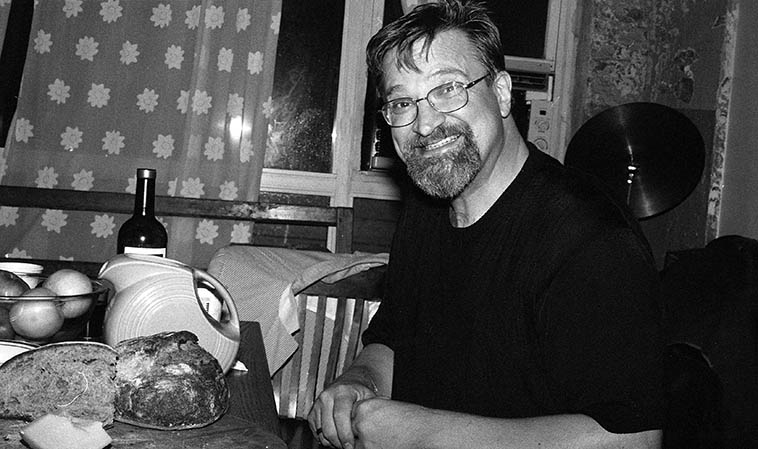 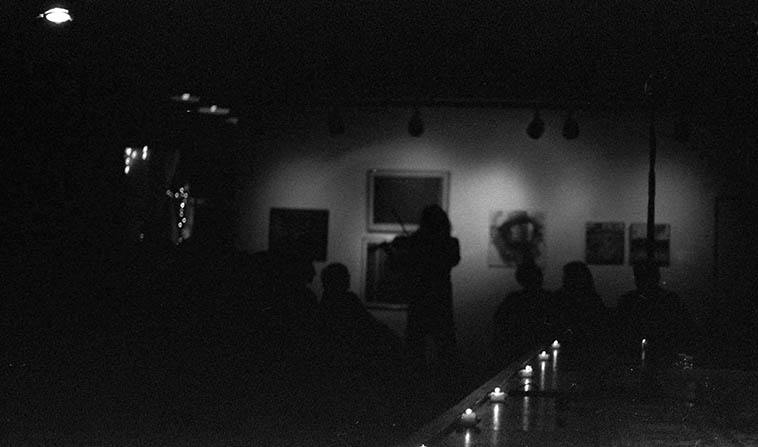 Iva Bittova leaves the stage at Outpost after her solo violin performance that was supernatural in it’s depth & feeling —- she has the ability to jump back & forth between worlds: She’ll commune with the audience and visit with us in our earthbound world and two seconds later she’ll be gone into the subatomic stratosphere of her improvisations deeply gone inside or somewhere, navigating by the stars, retelling the Legend of Time —- November 7, 2o13 — photo by Mark Weber 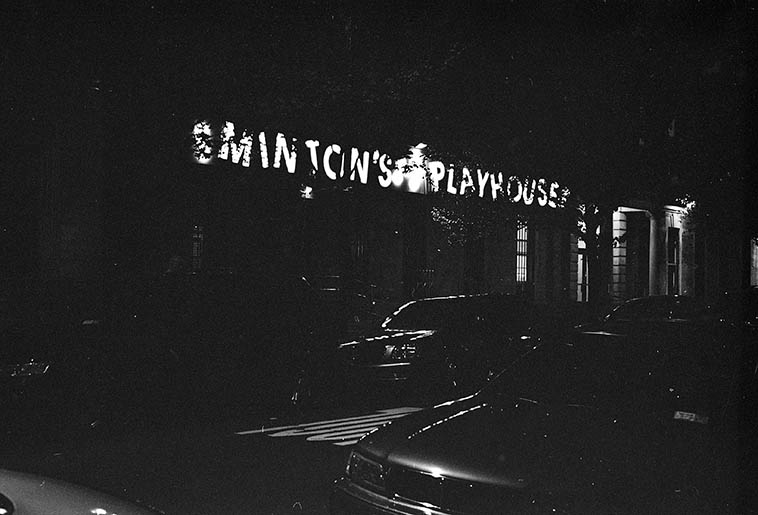 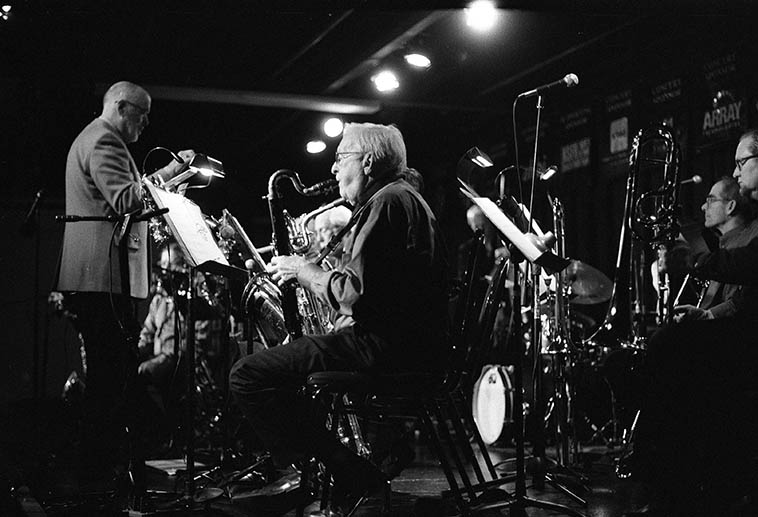 Arlen Asher doing the bass clarinet thing (he was also responsible for the baritone sax parts that evening) as member of Concordia Santa Fe Jazz Ensemble under the direction of John Leisenring —- Outpost Performance Space — December 19, 2o14 — photo by Mark Weber (they were playing the Ellington-Strayhorn arrangement of the Nutcracker) 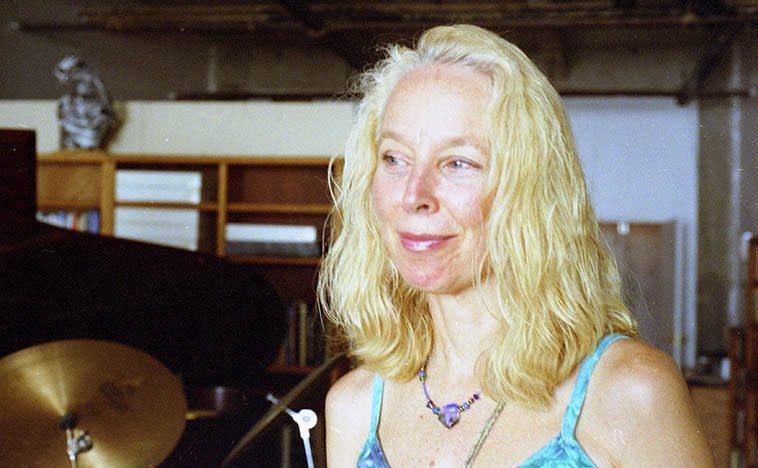 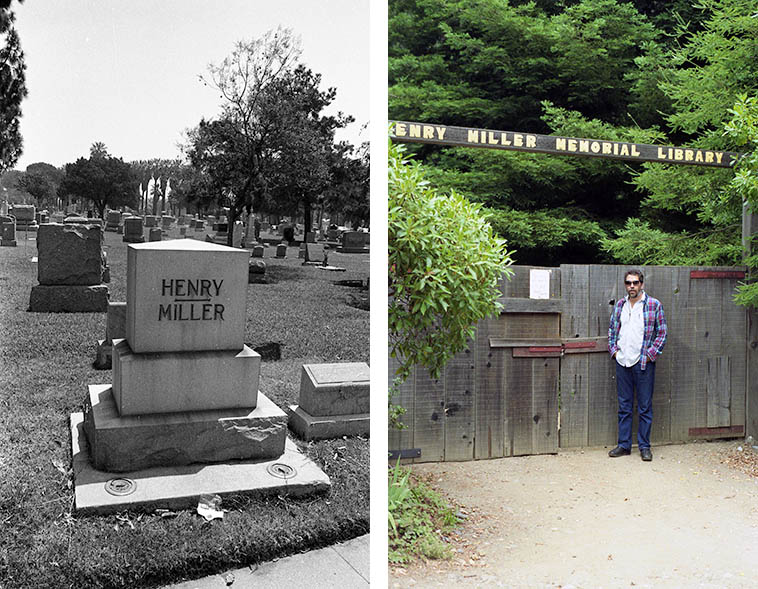 We were at the memorial service for Cat Anderson at Rosedale Cemetery just west of downtown Los Angeles and Chuck Niles and I decided to take a walk into the surrounding graveyard and smoke a reefer when we came upon this gravestone –Henry Miller had just died the previous June and had spent his last years in Pacific Palisades so it seemed likely it was him —- Maybe it’s just a memorial stone? as we found out later that his ashes were spread out over the ocean at Big Sur —- I recently revisited a couple of Henry’s books he wrote in his 80s (Capra Press), stories about various friends in his long life, the accumulative effect behind all of his signature exhilaration and lust for life is a backdrop of humanity as marionettes, madness, a deranged sideshow, his youth in Brooklyn a crazy circus: madmen, teenage hoodlums, gimps, beggars, police on the take, off-key opera singers, pyromaniacs, drunks, a halfwit boy who masturbates on rooftops while busloads of people cheer: A gleeful jaundiced view of things: unfaithful wives, rotten doctrinaire school teachers, crooked assemblymen, rats, cockroaches, flies, bedbugs, mangy dogs, disgrace, grave diggers, gamblers & con men, discarded wooden legs, desolations, strangers fucking in parks, fucking going on everywhere, alleys, closets, dance halls, hunger & depravity & dishonesty the order of the day, swindlers, scoundrels, smoke & stench, opportunists, parents beating their kids, one-legged toothless whores, guttersnipes, slime, barefoot hustlers, lost children crying, landlords and their shakedown strongmen, paint peeling, surging sewers, Walt Whitman, Hieronymous Bosch, Rimbaud —- He pulls no punches, calls it the way he sees it, a world in decay, somewhat harsh visions, venomous and distorted, deranged, everything going up in flames, utterly burned to the ground, scorched earth misanthropic, lost souls, a fell world, an ambush —- Ever indefatigable, Henry plunges on, he has no dread, he had gone beyond that, he seems to enjoy it all: soapbox evangelists, fire & brimstone retribution, carpetbaggers, trigger men, leafless trees, stool pigeons, buncombe artists, bogus dentists, quack doctors, botch jobs, dubious astrologers, fortune tellers, jailhouse canaries, corrupt dance hall girls, confused cowboys, jugglers, a monkey roped to an organ grinder, infidelity, damnation, betrayal, extortionists, petty cruelties, weak-kneed drunks staggering against a wall, unrepentant, a mother with a 4-year-old still suckling on the tit, burglars running down the street with a bike, debauchery, pestilence, cartwheeling escape artists, flatulence, a 60-year-old newsboy, 3-card-monte, stock market speculators, harlequin unicyclists, hayseeds, imposters, schemers: Henry loves it all, his only match at this hortatory mayhem is H.L. Mencken, or Celine, maybe Twain, certainly the W.S. Burroughs of Naked Lunch —- the only difference being that Henry revels in it, bathes in it, joins in gleefully, splashes around and adds his own semen to the vortex, riot, delerium, an orgy of fire, a third-rate farce, malignant, the phegm-coated windows of the San Bernardino County Jail at Waterman that I remember . . . .AND while the rest of us are horrified, Henry is cheering —-(The other photo is me in Big Sur at the library Henry’s friend Emil White opened — photo by Janet — July 11, 1991)