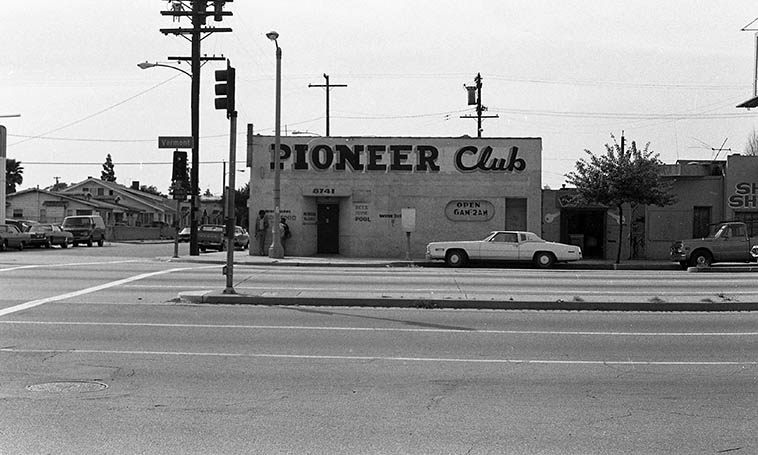 I caught a lot of blues music in this joint on the weekends —– Smokey Wilson’s Pioneer Club at 88th & Vermont in South Central (altho, we didn’t call it “South Central” in those days) — February 28, 1980 — photo by Mark Weber —- Most of the post-war black blues musicians in Los Angeles came from the South, most of them from Texas

NO POINT IN ADDING TO THE CLUTTER

I say this because
every time I read a poem by Han Shan
or those others I get all fired up
to write some poems in their manner
but
what could I possibly add
……….to the majesty of their poems?

Then I thought: by extension I’m sure glad musicians don’t jump
in the hammock merely content to listen to what has
already gone down

I suppose the argument follows: that everything
can stand to be recycled through the current filter of the present —–
Does that mean I have to climb out of my hammock
and versify forthwith with my quill? 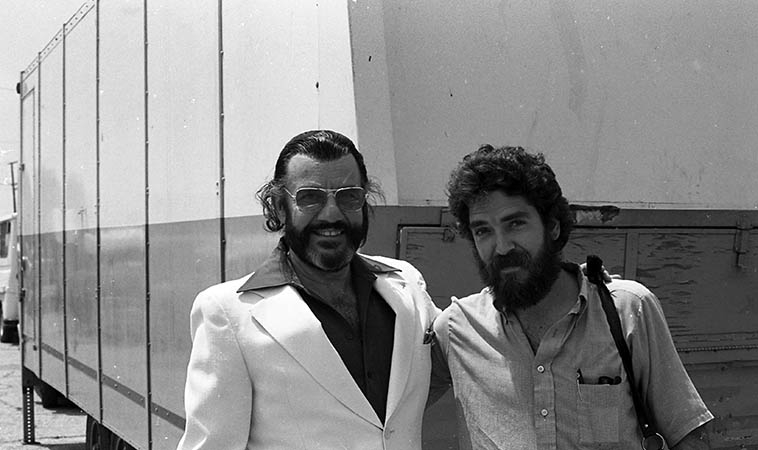 Johnny Otis and your Thursday KUNM afternoon jazz host Mark Weber at Watts Towers Jazz Festival —- July 16, 1983 —- Johnny was the emcee that day —– Hal McKusick told me that when he worked for Johnny during 1945-1946 in Los Angeles that Johnny was an entirely decent and fair band leader to work for, and everything I’ve ever witnessed with Johnny bears that out . . . . 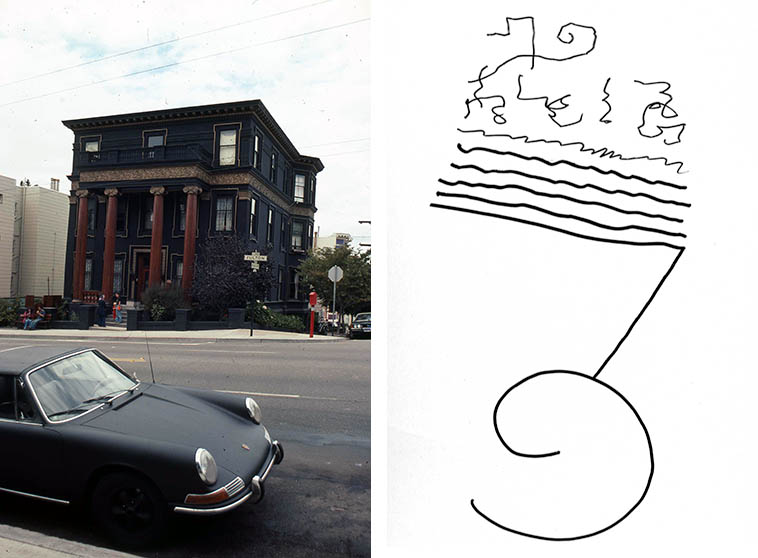 R.I.P. Paul Kantner (that’s his black Porsche) —- 2400 Fulton Street, the (Jefferson) Airplane House —– August 1978 San Francisco —- I grew up in Southern California outside of Los Angeles and the smog was so freakishly bad those years that from 1975-1980 I always tried to find a way to summer-over in Frisco — So, I just happened to be sitting in my blue Volks with a friend across from the Mansion when Paul Kantner emerged and got into that Porsche (Targa?) and I said Hi and he looked to see if he recognized me and didn’t but said Hi, in return, just the same . . . . (Line drawing by MW 20may15) 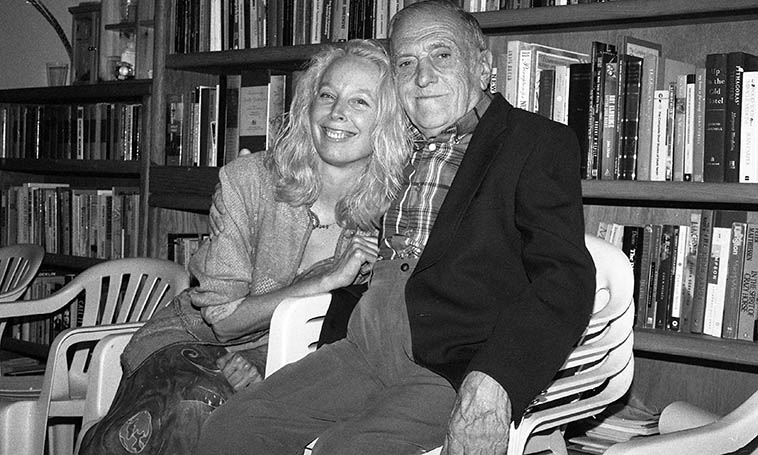 Way back in time, Kazzrie and Bill are at Berklee, and somehow they find out about Lennie Tristano and they drive from Boston to NYC once a week for individual lessons with He Who Opens the Door —– Meanwhile, Charley is studying with Lenny Popkin, who studied with Sal and Lennie and Warne——————and slightly later Don is playing with Sal ————–and Virg frequents Lennie’s salon, and studies with Connie, and Carol studies with Connie, (Connie studied with Lennie way back in the early 60s and before that with Lee) then Charley begins studies with Connie while Bill Payne was out on the Great Plains riding trains back & forth across the country with Barnum & Bailey (eleven years!) where he played a lot of complicated music, after which he took a break from the rails and took up with Broadway pit bands so he could study with Connie in NYC————Eva looked across the Atlantic from Sweden where she had met Andy Fite, who studied with Connie, and so she flew over and still takes annual lessons from Connie——SO, things are interlaced, cross-pollenized, opened out ———and as such, the music is interlaced in a Bach-like kind of way that turns in the mind like a kaleidoscope . . . . . PHOTO of Kazzrie Jaxen & Sal Mosca at Connie’s loft in Williamsburg — September 18, 2005 — photo by Mark Weber 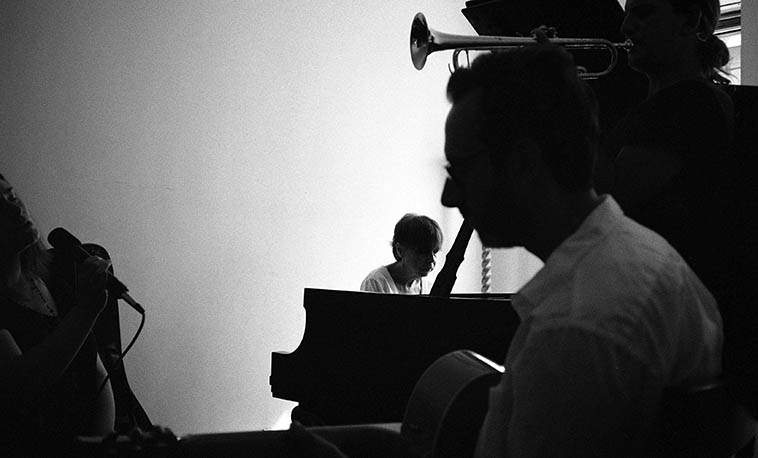 “A camera gave me a way to be present in the world . . . One of my teachers was the anthropologist John Collier, and he said with photography you took but you also gave . . . there’s a collaboration that I’m cooperating with something that exists . . . I’ve always been attracted to the idea that the camera records the light reflected off the surfaces of things, and I’ve been interested in a kind of decisive moment because I think it’s the hardest thing to do . . .” —-Elaine Mayes extracts from an interview, Spring 2002 —————————————Jam session at Carol Liebowitz studio on 103rd Street — Cheryl Richards, song; Virg Dzurinko, piano; Adam Caine, guitar; Ryan Messina, trumpet —- September 4, 2o15 — photo by Mark Weber 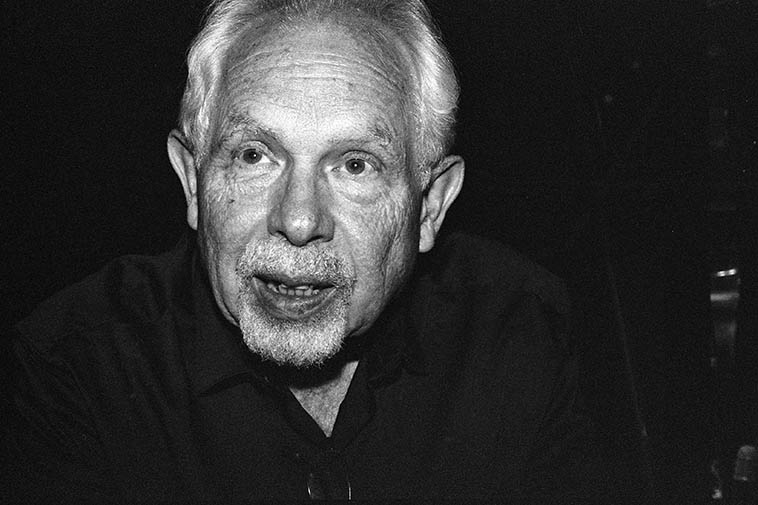 Cameron Brown —- May 7, 2o15 sideman with Lena Bloch Quartet at Kitano Hotel, 66 Park Avenue (at 38th Street) swanky Manhattan it was very nice —- and I found out Cameron speaks Swedish, he and Eva Lindal met and talked in that tongue as I imagined the voices of the Elder Edda and the Voluspa —- photo by Mark Weber 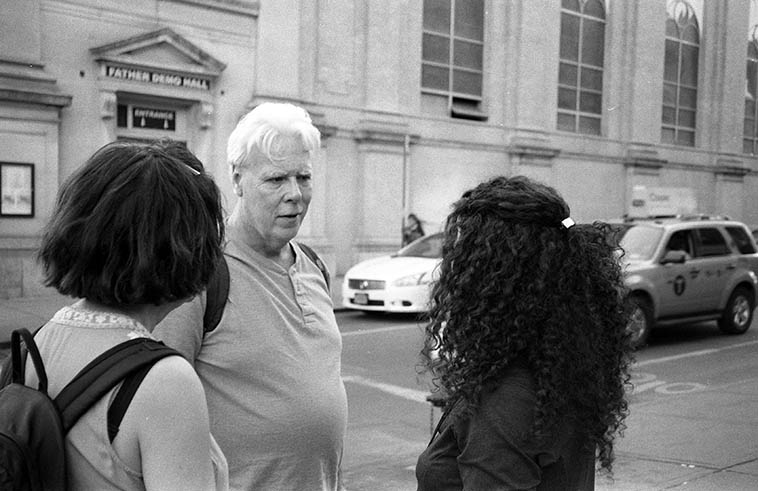 The trio of Payne Lindal Liebowitz —- We were traipsing around Greenwich Village that afternoon looking for ghosts —- clarinetist Bill Payne, violinist Eva Lindal, pianist Carol Liebowitz, there had been a rehearsal over in Brooklyn earlier —- May 7, 2o15 —- photo by Mark Weber 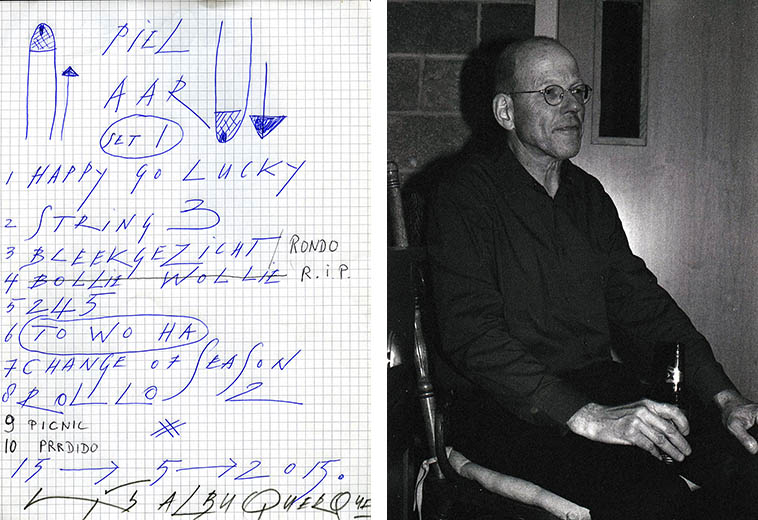 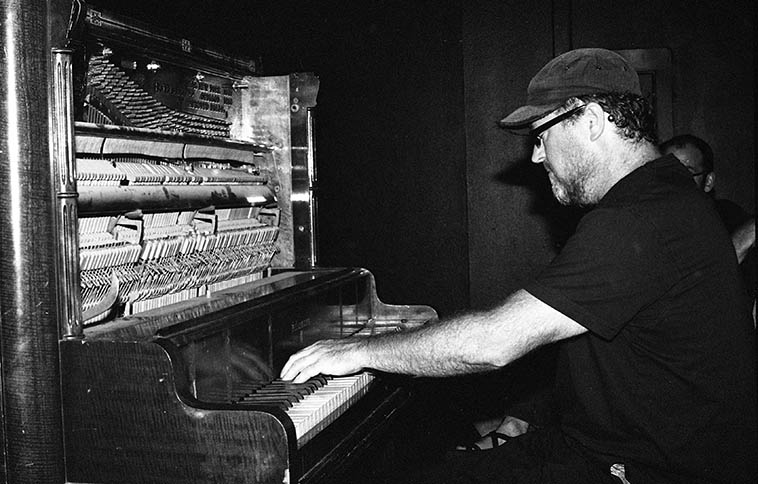 Thollem McDonas — photo by Mark Weber downtown Albuquerque at The Roost — August 9, 2o15 —- I’ve caught this roaming traveler a few times in recent years as he & Angela have passed through Albuquerque, they spend much of their life on the road, (although, they have domiciled recently in Alcalde, in northern New Mexico of late) —- Thollem comfortably resides in the realm of modernist “20th century music” utilizing EFX boxes on highly modified keyboards and so forth, entirely improvised, not exactly a “jazz” cat, at this performance he found this ancient upright hidden in a dusty corner and rolled it out front of the stage and proceeded to elevate himself into my top echelon of pianists, pounding out a mixture of ragtime and Gershwin and Misha Mengleberg and probably some Henry Cowell for good measure —– If we could corral this guy to play jazz, he’d be one of the best, it was quite astounding —- Presently they are out there on the road and won’t be back this way until the end of the year when I hope to have him on the show . . . . 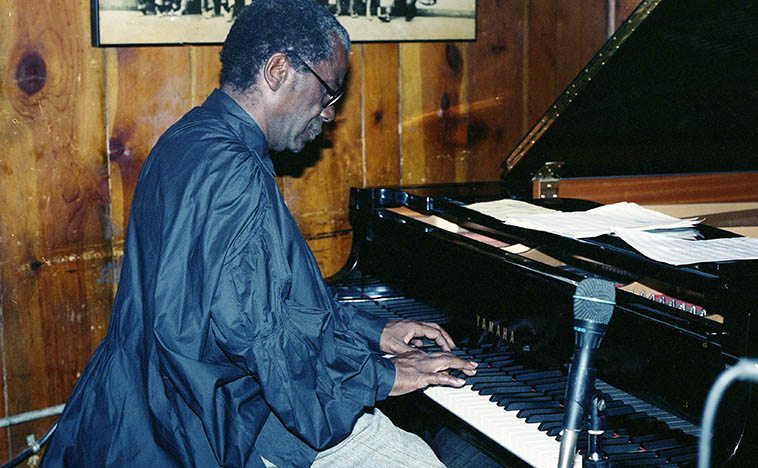 Andrew Hill — September 1, 1996 at Sweet Basil (7th & Bleecker) NYC —- We sat at one of the front tables and I got to watch his fingers all night playing with his quartet (Rufus Reid, Bennie Maupin, Pheeroan AkLaff) Andrew Hill had a hesitant manner in placing his chords, he’d hover over the keys and only drop the chord in at the most oblique spots where it could float and drift with the mists—- photo by Mark Weber 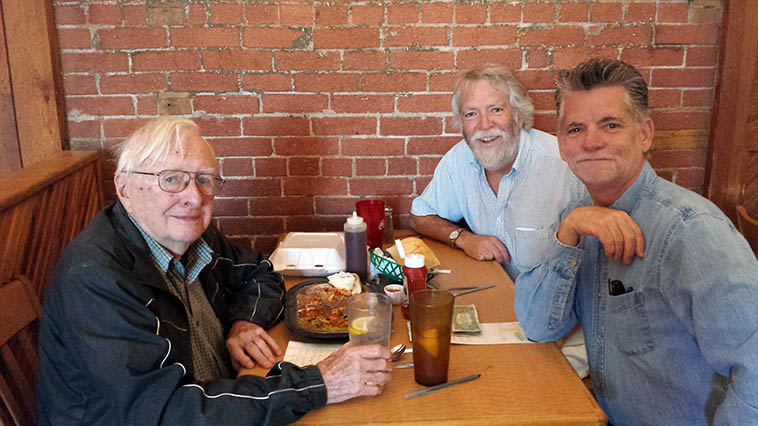 Arlen Asher, Mark Weber, Cal Haines at our favorite restaurant post-radio-show lunch in Santa Fe: Tomasita’s —- snapshot on Cal’s smart phone snapped by our waitress Jolene — June 6, 2o14 —– I’ll fly some of Cal’s adroit and consummate drumming today on the show and not just because it’s his birthday (b. 18feb50 in Canton, Ohio) maybe some tracks with Arlen on one of the many woodwinds he has at hand (besides his mastery of jazz, Arlen has also worked in television and radio and interviewed Louis Armstrong circa 1958!) I do radio on KSFR with Arlen every few months and he is always interested in everything, when I got into yoga ten years ago he wanted to know everything about it, and when I started studying Anglo-Saxon he wanted to know which book to get, after my trips to New York and L.A. he gets me on the radio to give a full report, he’s also a photographer, and built his own house out in the wilderness off the grid south of Santa Fe —————–Cal’s father was a saxophonist and Cal was a working musician by his teens, he studied with the same drum teacher as Joe Morello, every Saturday Cal would take the long bus trip from Canton up to Cleveland to The Arcade Building (401 Euclid) for his lessons with Charlie Wilcoxin, author of several indispensable method books (which Cal now gets his own students into) . . . . and the music continues . . . . 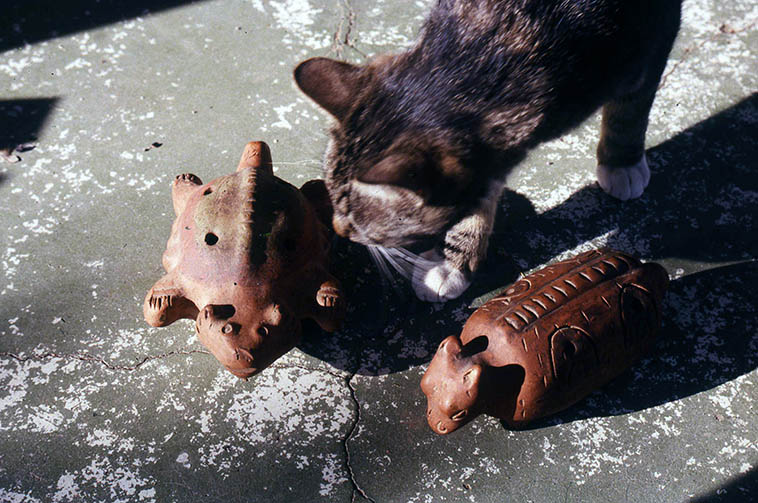 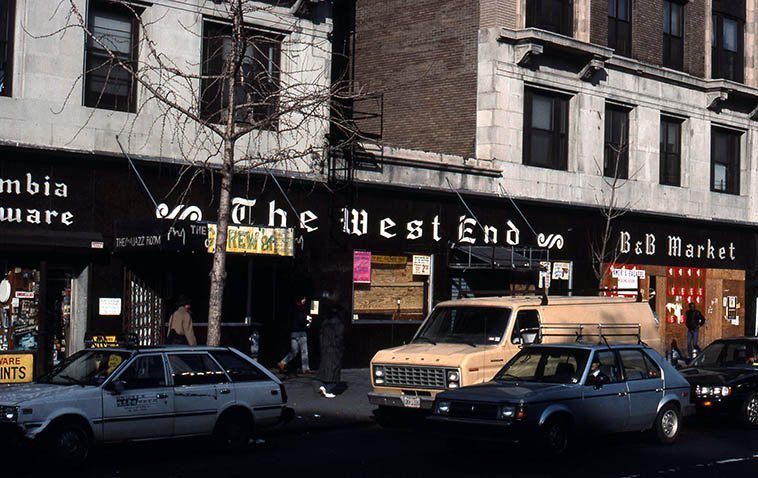 The West End features prominently in the annuls of Beatnik lore in the 40s as well as all the unstoppable jazz manifested there in the 1980s & 90s under the direction of WKCR deejay Phil Schaap —- (KCR is across the street at 114th and Broadway) w/ such luminaries as Sonny Greer, Papa Jo, Buddy Tate, Wild Bill Davis (w/ young Doug Lawrence on tenor), Russell Procope, Lee Konitz, Joe Albany, Vic Dickenson, Doc Cheatham, Harold Ashby, Warne Marsh (w/ Joshua Breakstone on guitar) for 18 years — photo by Mark Weber — December 1988 —- My wife’s sisters live directly ten stories above the West End and we stay there often, always getting up in time to listen to Phil’s radio show Bird Flight at 8:20 weekday mornings