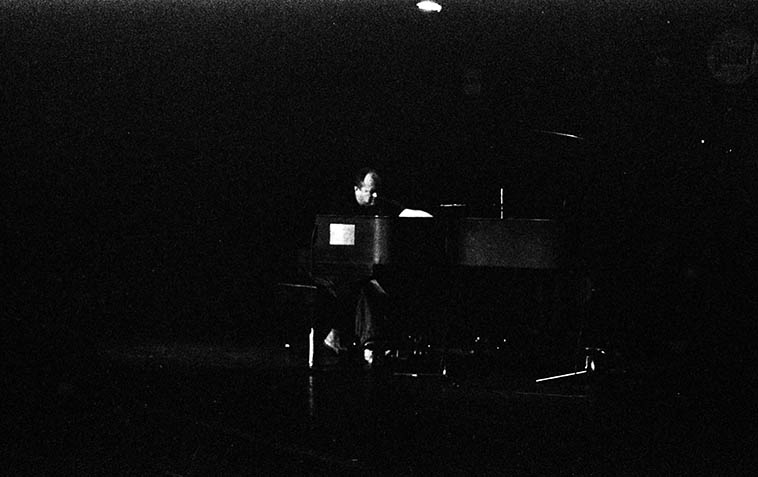 AN OUTRIDER FROM THE MAVERICK TRADITION

We live in times fraught with trepidation. Impending doom seems ever upon the wind. Didn’t we once trust the day, and the days to come? Were we purely innocent or have things changed? I can’t but hear a warning in the intrepid saxophone raging against the night, he who will never go unquiet shackled and chained, how menaced is his message, leave a few coins in his hat and sleep this night if you can, Grendel is out there counting the moons.

. . . . I must have went to sleep last night reading Spengler (not) for this outpouring of darkness spun into archaic prose has nothing to do with our guest today who is actually a very calm person and thoughtful, though ye of gentle and delicate sensibilities be forewarned he is purely involved in modernist vision and unstinting avant temperament and it is with great respect we have someone of his commitment on the Thursday jazz show (I wonder if I’ll ever reread Spengler?)

Our guest today: Thollem McDonas will be in-studio Live and with instruments (see photos). This is a great boon to the airwaves. We’re even going to roll in the KUNM Unprepared Piano so it’s going to be some great fun. 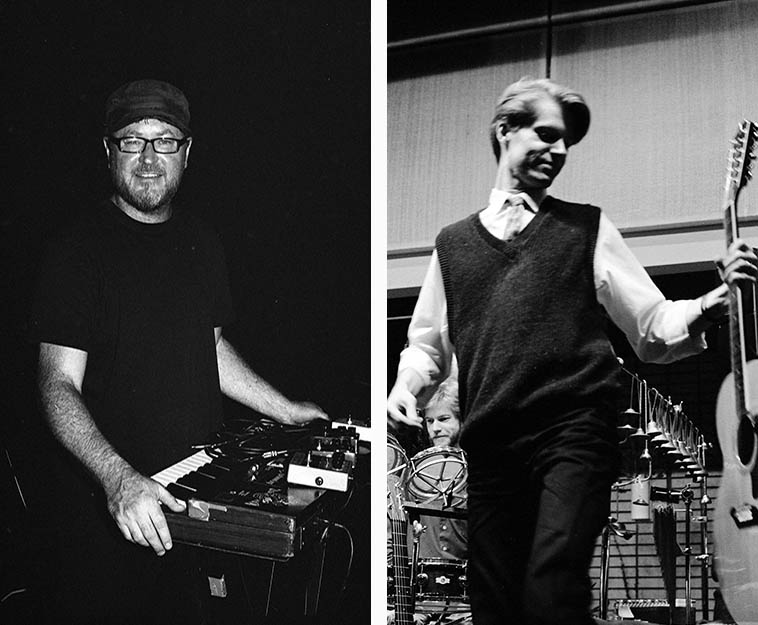 Thollem McDonas with his gear — August 9, 2o15 — Albuquerque —– Nels Cline, a long time ago (Alex Cline on drumset) — February 8, 1985 —- photos by Mark Weber — Thollem and Nels have made a couple albums (the 12-inch variety) together recently 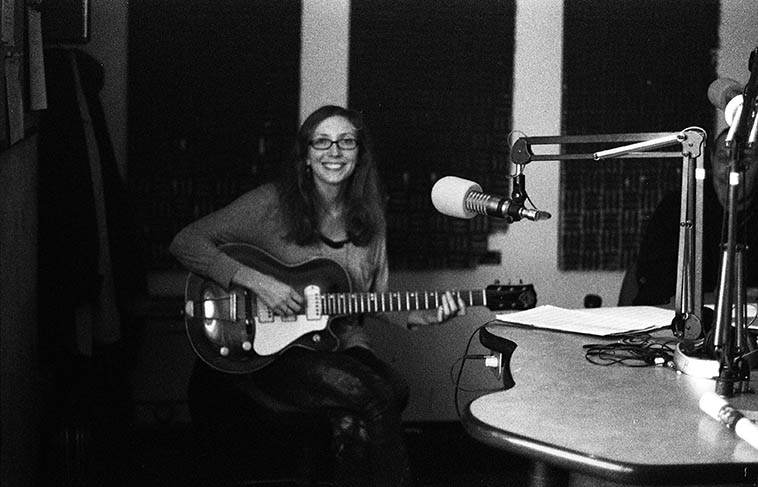 Mary Halvorson at KUNM — December 19, 2o13 —- She’s such a good sport that when I noticed she had the sheet on Carla Bley’s “Ida Lupino” I begged her to play it, and even though she was just beginning to familiarize herself with Carla’s most beautiful melody, she knocked out a rendition for the New Mexico airwaves, AND now on her new cd MELTFRAME a marvelous new version, which we will spin this day —- photo by Mark Weber 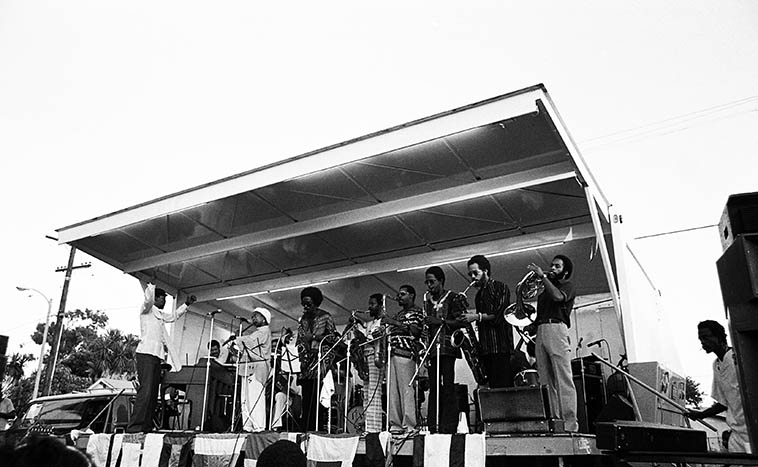 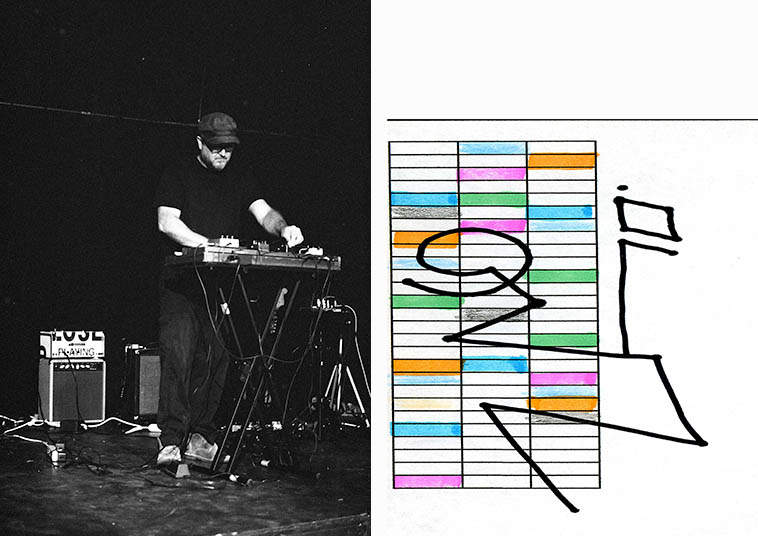 Thollem McDonas — August 9, 2o15 —– I like how his mind thinks. Even as one doesn’t exactly “think” while improvising, it’s more subconscious. Still, much is revealed. Even before you start there are decisions, but, once you get into it certain affinities come forward: rhythm, harmony, spatial values (form, duration), chance and the use of chance events. Mostly a state of cool — grace under fire as Hemingway would have it — is what I like about Thollem ——-photo & line drawing by Mark Weber 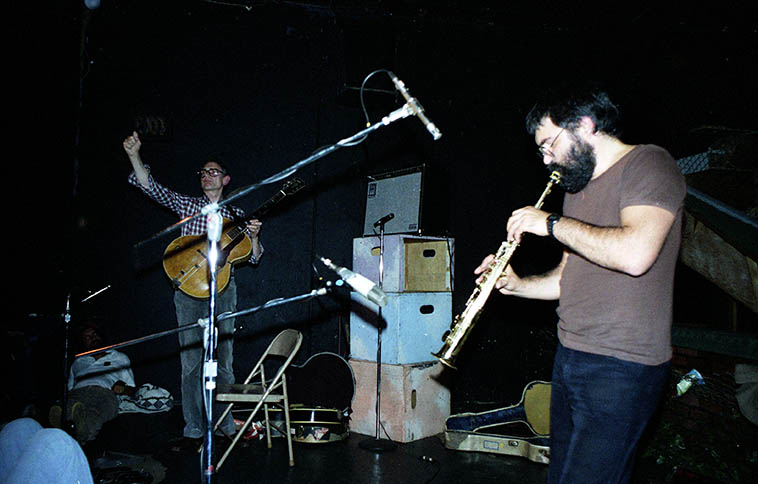 Derek Bailey and Evan Parker in Los Angeles — October 15, 1980 at Century City Playhouse — photo by Mark Weber —— Evan Parker has found things on the saxophone that nobody ever dreamed existed, I love his solo records and have all ten (?) of them, and Derek is so weird (to me) that he’s marvelous, it seems like his ensemble approach is to be contrary (?) He endeavors to be exactly 180 degrees opposite of whatever everybody else is doing —– Nobody should be in this world and never have heard the album THE TOPOGRAPHY OF THE LUNGS (1970), it’s a masterpiece of disparate organization & wry humor 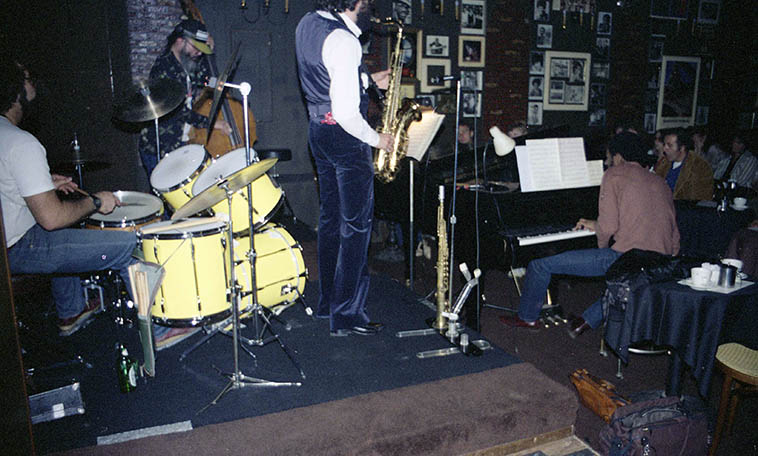 Krystall Klear & the Buells at Carmelos, North Hollywood (Jerry Peters, piano; Marty Krystall, tenor; Peter Erskine, drums; Buell Neidlinger, bass) — March 25, 1981 — photo by Mark Weber —- Today we’ll spin the recently released cd GAYLE FORCE (K2B2 Records) derived from tapes found in Buell’s archive that are of tantamount historic value: From my vantage, 1965 is The Halcyon, the Way Back When, the Near Beginning of Free Jazz, of course there were others playing like this, but not many! You could get arrested for this sort of playing, or tossed into the looneybin. It’s Buell with the late John Bergamo when he was still a jazz player (he’s Chris Garcia’s mentor) in Buffalo NY on a snowy day with Charles Gayle stretching the fabric of time and stretching the seams of his tenor saxophone as well —-> E = MC2 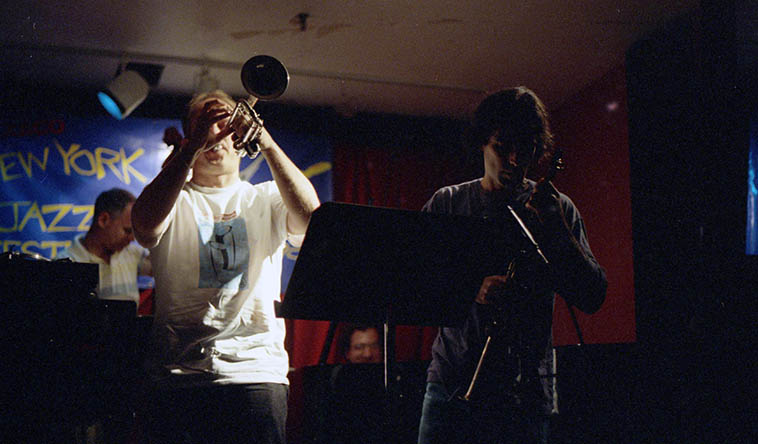 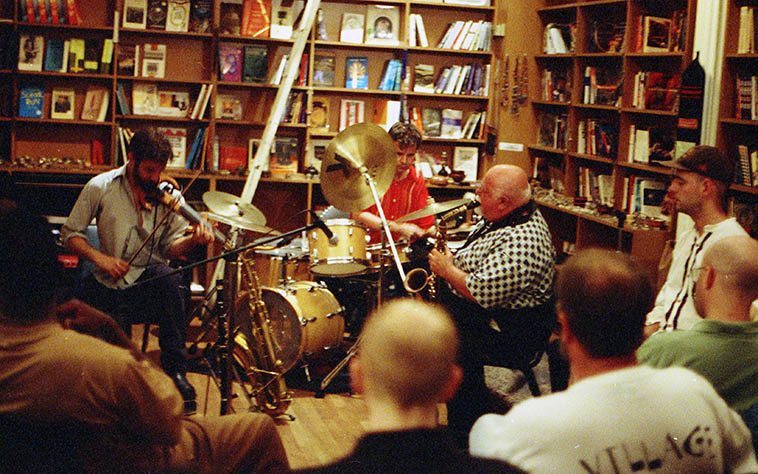 Joe Maneri Trio — June 28, 1997 at Biblios (bookstore), 317 Church, downtown NYC (Mat Maneri, electric six string violin; Randy Peterson, drumset) —- photo by Mark Weber ——- I remember this night I got semi-lost endeavoring to get home back up to 113th Street — not being a New Yorker I didn’t know the subways close many of their stations late at night downtown and I wandered around for seemingly hours (I have a variety of spatial dyslexia) looking for a get-on, I can’t tell north from south (Max Roach had the same condition, I found out one night in a cab with him!)(dyslexia refers to words, so is not exactly the right term) 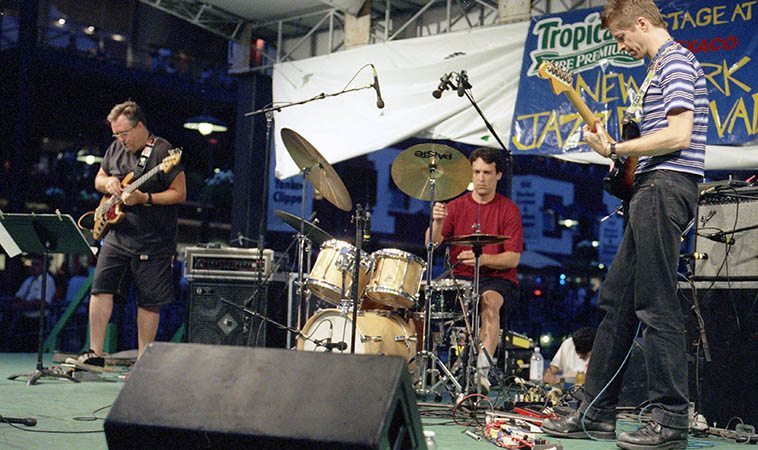 Nels Cline Trio at South Street Seaport Park, Manhattan NYC — Bob Mair (bass); Michael Preussner (drums); Nels (guitar) —- June 28, 1997 — this park is on the East River and at one point in the performance a giant garbage scow floated behind the stage going out to, I was told, Staten Island to be buried — But, it made for quite a vision —- photo by Mark Weber 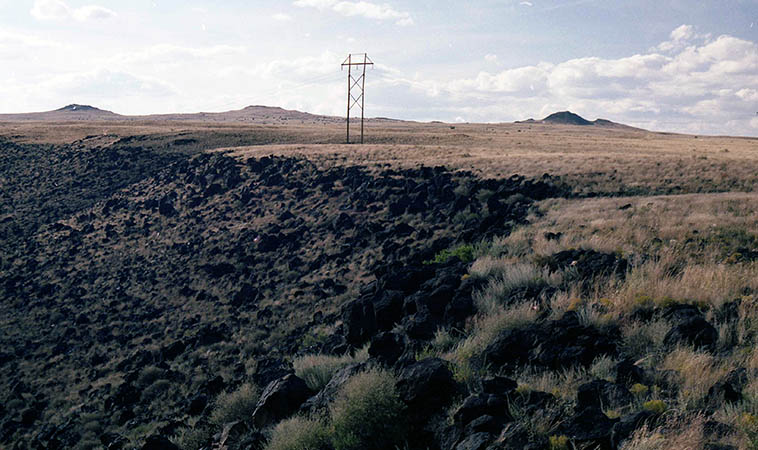 Yes, that’s where we live: The Albuquerque volcanos on the edge of town — that basaltic ridge is 17 miles long from a volcanic eruption 150,000 years ago —- photo by Mark Weber — October 23, 1991 —- We call them volcanos but they are really fumaroles, still mildly active (no snow stays on them) —- Back in 1955 a couple college pranksters hauled some old tires up on top of the biggest volcano and lit them on fire so that from the city it looked like Vulcan was about to erupt — you can imagine the black smoke coming from car tires — the city was freaking out and even the fire department was ready for action (like, uh, what are they going to do?) — in his final memoir THE FOOL’S PROGRESS (1988), Ed Abbey admitted that he was the practical joker along with a couple of his beer-drinking buddies 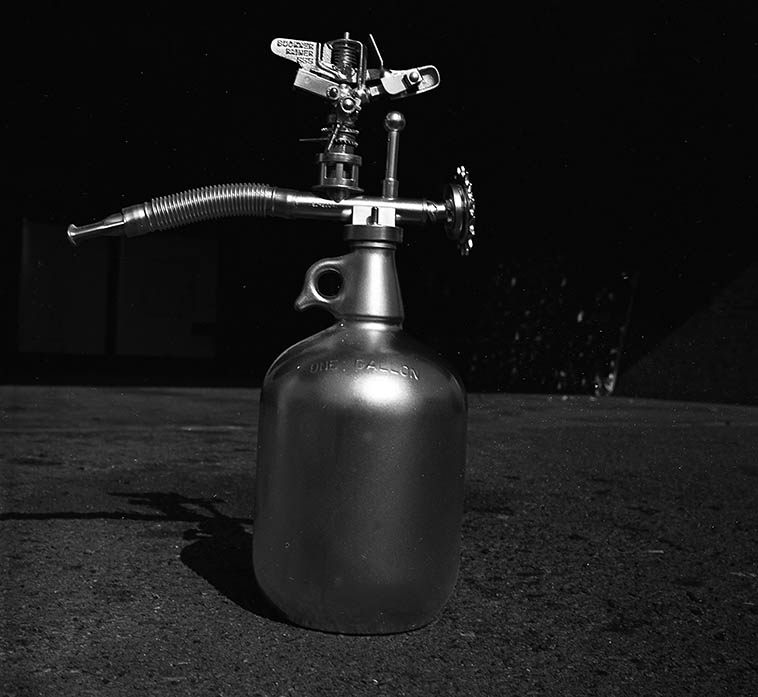