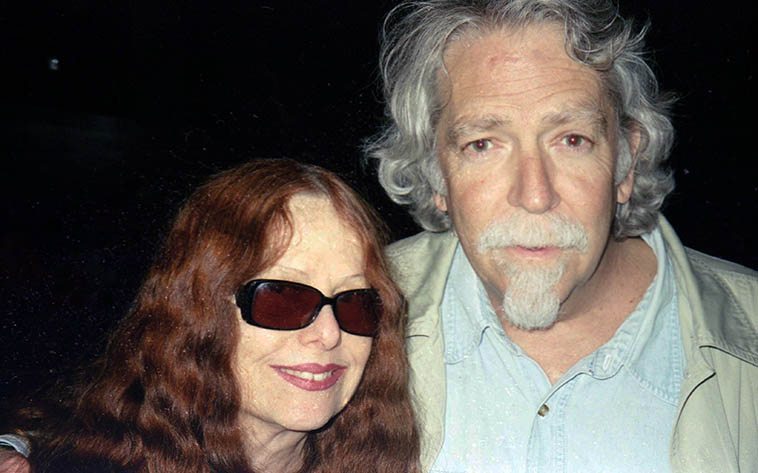 Me and my favorite poet Joan Jobe Smith in Long Beach, California — April 12, 2o10 — I can’t say enough good things about Joan: she’s a master of the culinary arts; was co-editor of legendary literary magazine PEARL; a lover of the Hollywood of Joan Crawford and Rita Hayworth; was a go-go dancer at the Whisky-A-Go-Go (and me and her husband Fred Voss can’t quit asking her about Jim Morrison & The Doors — she’s a jazz girl so all that just bores her); and a member of the Society of Earl Grey Tea Drinkers of Albuquerque & Long Beach (me & her); and one of the most honest people I know, just read her poetry, she makes the rest of us look like the phonies we are — the rest of us poets, that is.

I was just telling Klaus that it goes against my better judgement to write about politics and more directly about this strange bizarre Presidential Campaign that’s been going on in America, but it has pervaded my mind and I can’t think of anything jazz-wise to write. I once told Connie Crothers that I don’t write about politics, on purpose. I grew up in a household where political discourse was always going on, and nothing became of it. She admonished me: Mark, everything you write is political. Maybe so, I don’t know. It just seems that many times politics is used as a whipping post for other things that are going on in the life of the person who is ranting. Surrogate something-or-other. Connie was very political (but she never used it as a surrogate for the complexities of life). I can’t imagine someone like Donald Trump being President (I think we’re always suppose to have a leading cap on that word?) I read the other day that his mentor in the 70s was Roy Cohn — could it get any worse? My high school history teacher Mr Hughes made sure and brought home the implications of the HUAC fiasco in American history, and it was there I learned of strange people like Senator Joseph McCarthy and Roy Cohn, who enjoyed destroying lives and reputations. (Ray Hughes, a great guy, ran the steeplechase in the 64 Olympics. He had me teach him how to make wine.) (I was already a bottle baby by then.) I keep thinking of the renowned couplet from the Old English poem “The Battle of Maldon” :

Maybe that applies? Although, the Anglo-Saxons in August of 991 were vanquished by the marauding Danes (ie. Vikings) this heroic poem memorializes them for fighting to the last man. “Will shall be the sterner, heart the bolder, spirit the greater as our strength lessens.” 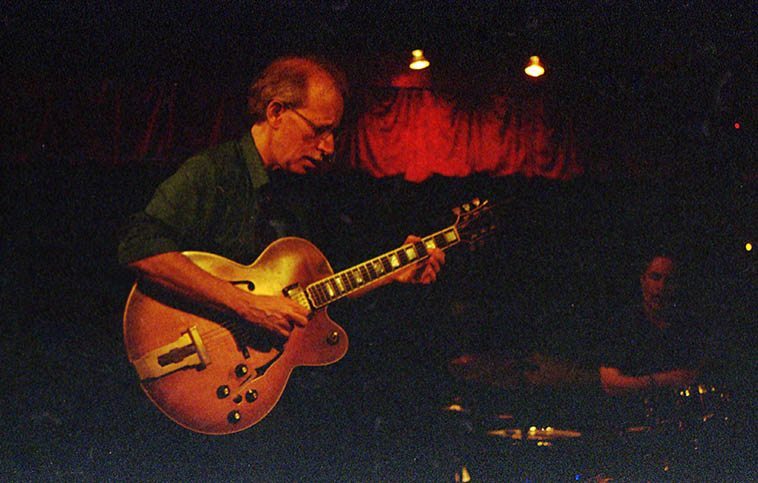 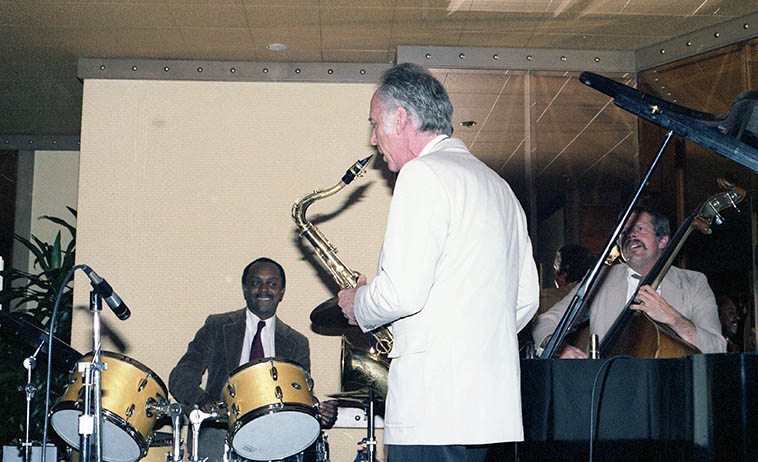 Tootie Heath in Hollywood (he now lives in Santa Fe) what a great drummer — April 12, 1985 at Hyatt Hotel on Sunset Blvd — with the Warne Marsh-Harold Land Quintet (Bob Maize, bass; Gildo Mahones, piano) — photo by Mark Weber —– Sure would have been nice if this quintet had recorded, when I asked Warne he said no record companies had come forward . . . . . . 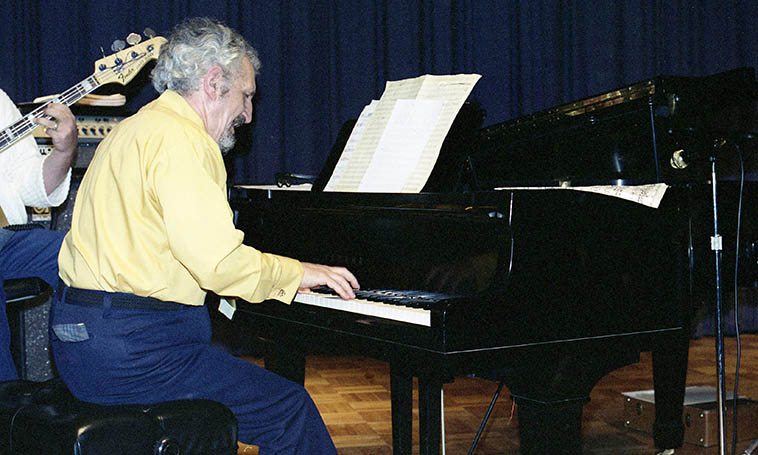 Fred Katz (you know him mostly as a cello player, but he did work on piano quite a bit, see his late-50s recordings with Carmen McRae, Ken Nordine, Pete Rugolo, etc) — 1979 — photo by Mark Weber 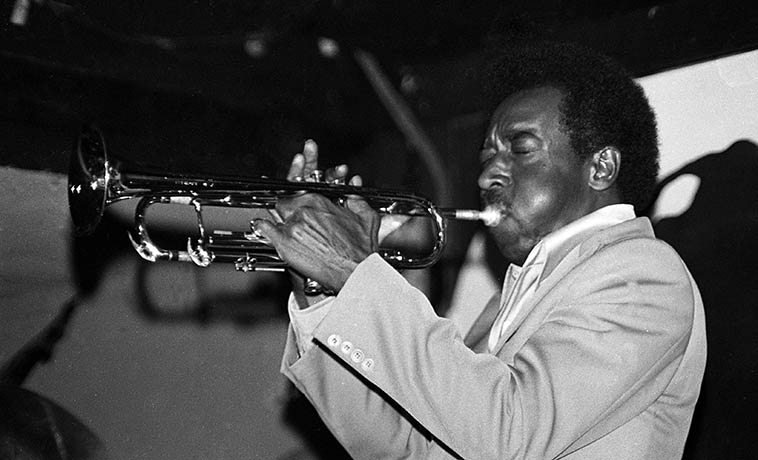 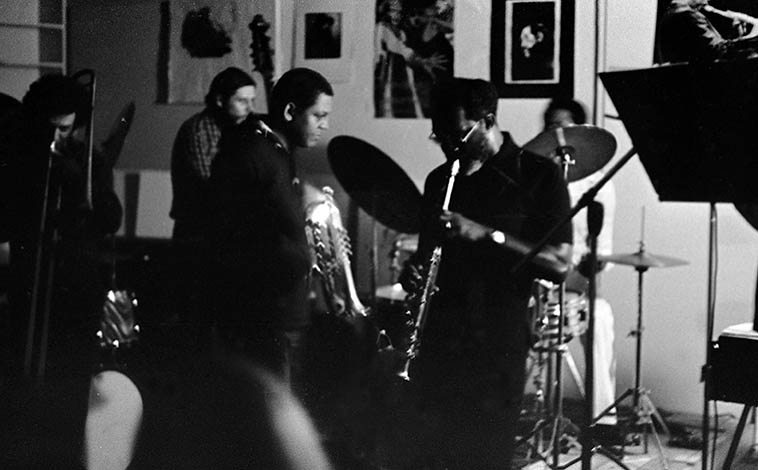 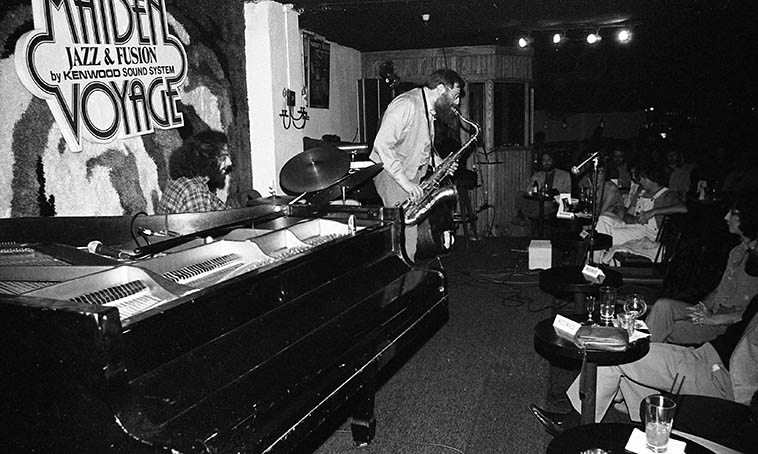 Lew Tabackin Trio: Joey Baron, drums; Charlie Haden, bass — January 26, 1980 at Maiden Voyage– photo by Mark Weber — This club was on Wilshire Blvd almost right across the street from MacArthur Park and Westlake (Art Pepper did some live recordings from this club — see his Galaxy Recordings) 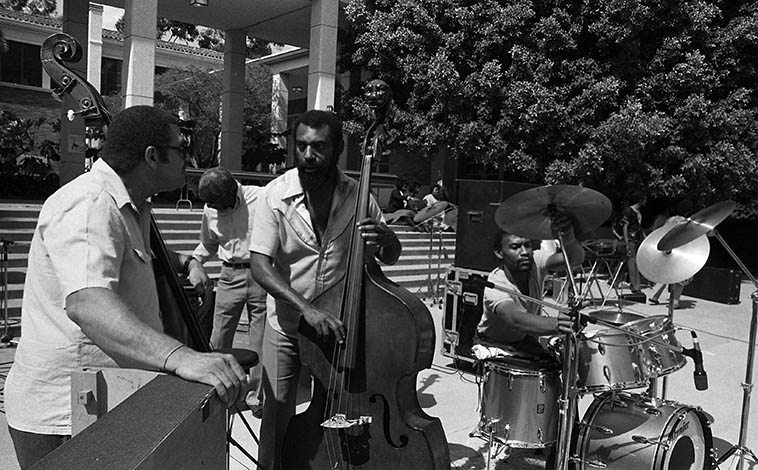 May 16, 1981 — Three bassists and a drummer — Left to right: Al Hines, David Bryant, Henry Franklin, Fritz Wise — There’s a lot of history in that photograph: Al worked as a music director at Hanna-Barbera; David has the distinction for being Billie Holiday’s bassist on the coast, and is the subject of Horace Tapscott’s tune “Dee Bee’s Dance”; Henry’s history in L.A. goes way back, his father was  big band leader Sammy Franklin, Henry studied bass with Al McKibbon, and George Morrow, and if you look hard enough you can see him in the film Monterey Pop (June 1967) with Hugh Masekela (Henry was on the mega-hit “Grazing in the Grass”) — photo by Mark Weber 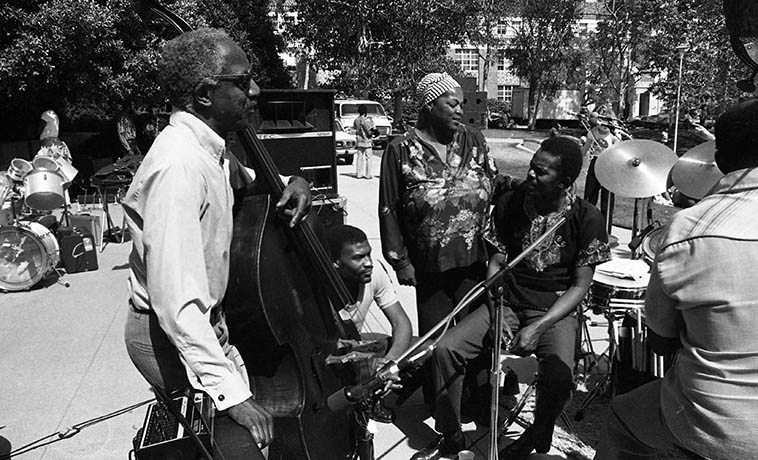 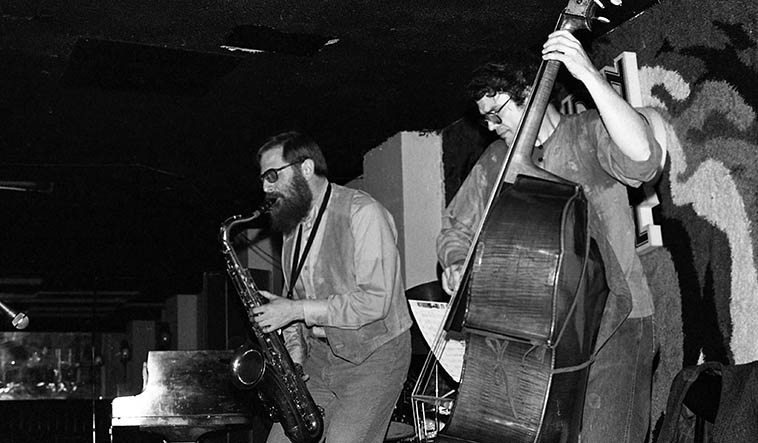 Lew Tabackin Trio at Maiden Voyage downtown Los Angeles — January 26, 1980 — Charlie Haden, bass — Lew on tenor & flute — photo by Mark Weber — I wonder who was the first to play in this most powerful configuration? I love an exposed trio like this: bass drums horn, was it Rollins that showed us the way? 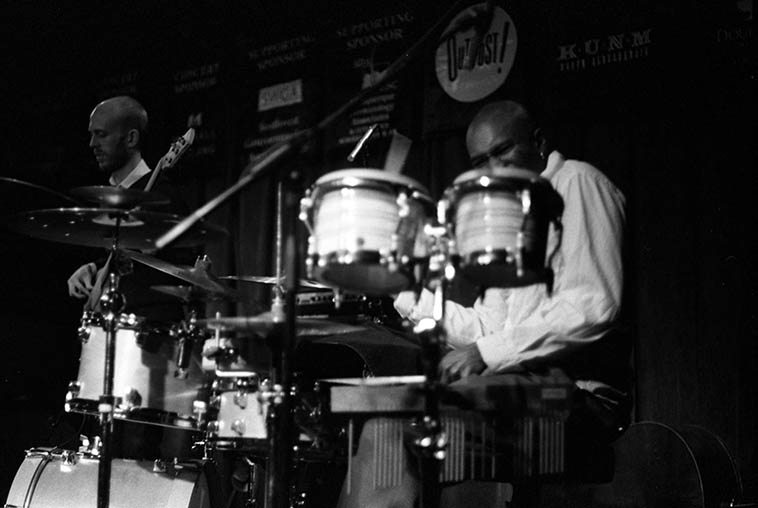 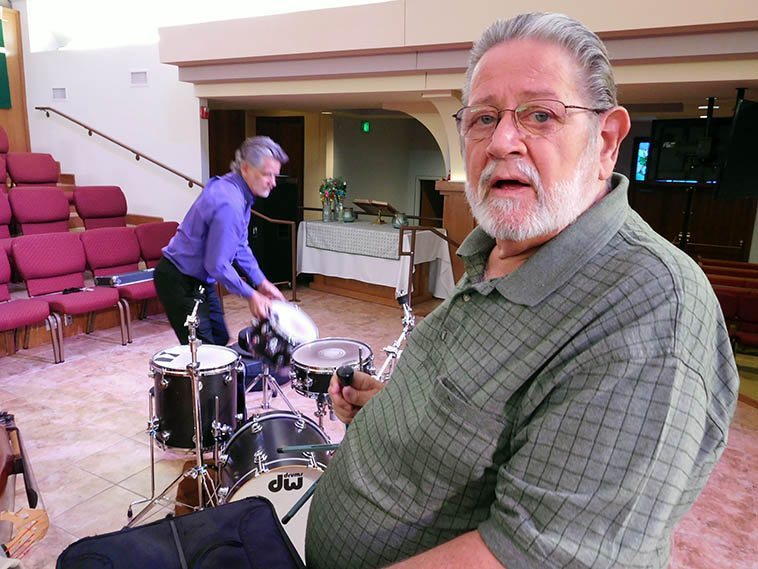 Bobby Shew has become one of the great jazzmen, always learning more, always teaching, always making it real — Here he’s getting ready for a Sunday afternoon concert in Albuquerque at St John’s Methodist Church, September 18, 2o16 with his Quartet (Jim Ahrend, piano; Cal Haines, drums; Colin Deuble, bass) — At this concert we learned that Bobby wrote his tune “Red Snapper” thinking about Don Menza, while sitting around on the Mork & Mindy set