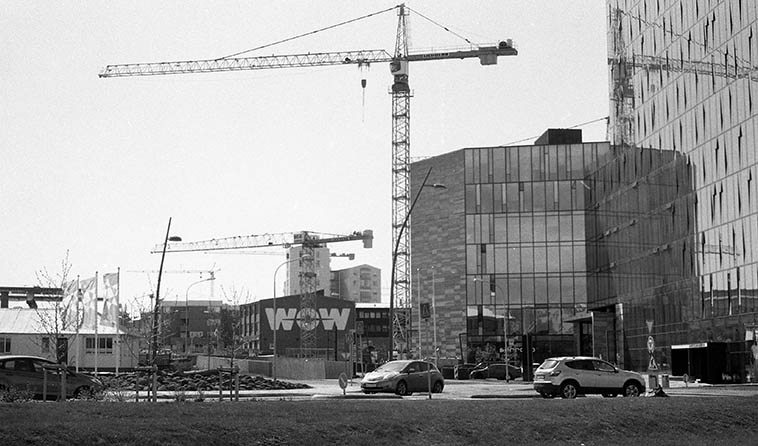 I told Connie that I got tired of looking for the most appropriate adjectives and have resorted to using the word “Wow” — it’s easier — and she said, “That’s exactly why Lennie started using it” —- We’ll play today Lennie Tristano’s 1949 sextet version of his tune “Wow” w/ Lee Konitz, Warne Marsh, and Billy Bauer —— photo by Mark Weber — May 22, 2o16 Reykjavik, Iceland

One of the most salient observations concerning the coming times came from Joshua Breakstone when he was in town and visited us on the Thursday jazz show last month. I’m trying to remember if I’ve ever seen this philosophical side of Joshua in evidence before? Maybe so, usually over green chile stew at The Frontier. I mostly think of him as a guitarist of long-line boundless Lestorian invention, all lyrical and flowing like a river. Here’s what he said on November 10 on the airwaves of New Mexico: I had asked him what it was like playing a gig on the night of the Presidential election and he said it was surprisingly well-attended, ” . . . and I guess, for those people that are feeling very very concerned about the future, feeling very apprehensive about the prospects for the future, ah . . . In a microcosm it shows us that what we need to do is, do things that we love, and pursue the things that we love, be around the people that we love to be around, and go about our lives, put together the happiest most creative, most interesting lives for ourselves. We have no ability really to control what’s going to happen with the government, and uh, we’re along for the ride, man: May you live in interesting times.” 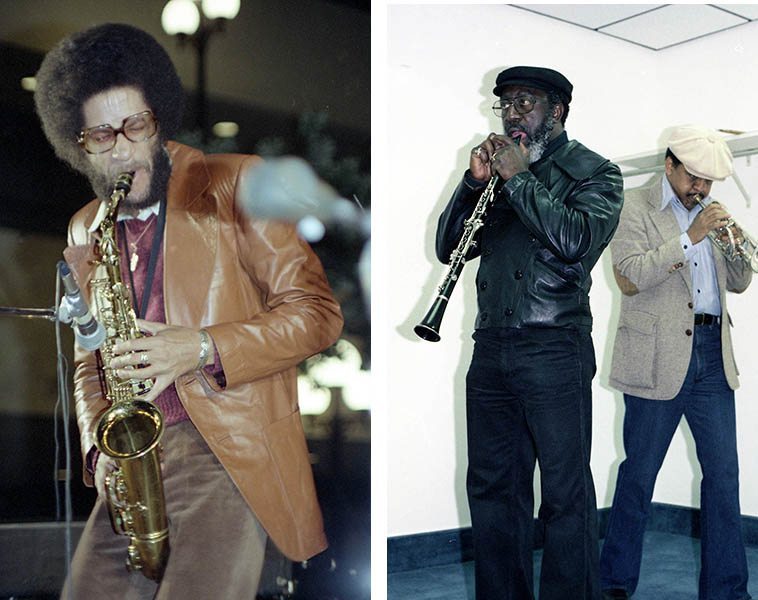 Gary Bartz solo alto saxophone performance at Eric Dolphy Memorial Tribute in Los Angeles, April 22, 1978 — and backstage at same concert John Carter (clarinet) and Bobby Bradford (cornet) warming up to go on stage — photos by Mark Weber —— Nick Lyons has a great affection for Bartz’s alto playing and studied with him at Oberlin some years ago 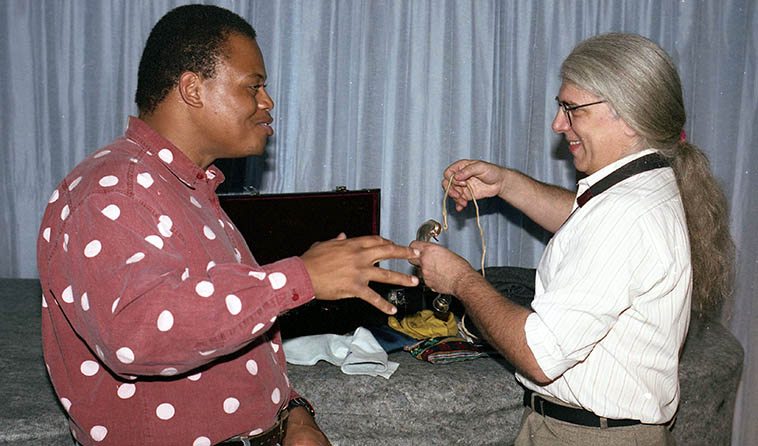 William Roper and Vinny Golia after gig in Alhambra, California, with the Michael Vlatkovich 7-tet — September 16, 1993 — photo by Mark Weber 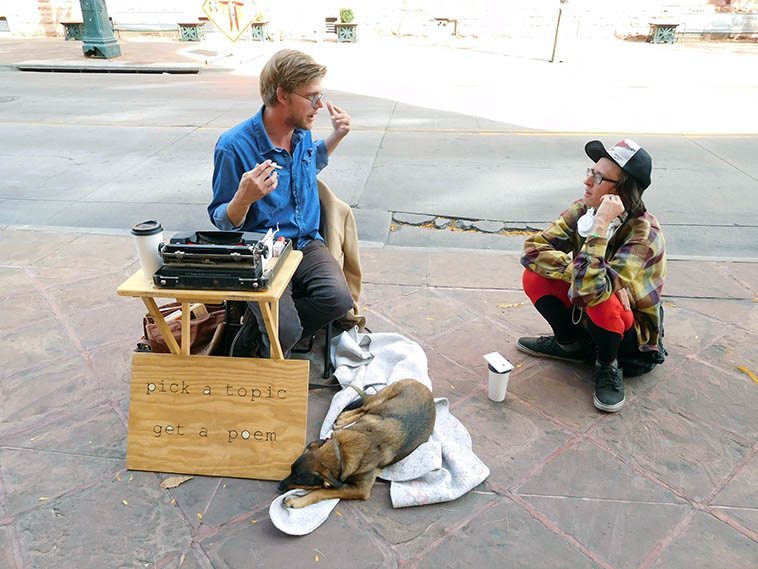 One tends to think of Neal Cassady when strolling downtown Denver, in the 40s these were his streets, this is where he grew up and became the Cody Pomeroy and Dean Moriarty of Kerouac’s novels — And then here’s this poet with a typewriter on the main drag — 16th Street outside Tattered Cover Bookstore — like a ghost of those holy beatnik days: Devan Kingsford and I didn’t catch his dog’s name — October 30, 2o16 — photo by Mark Weber 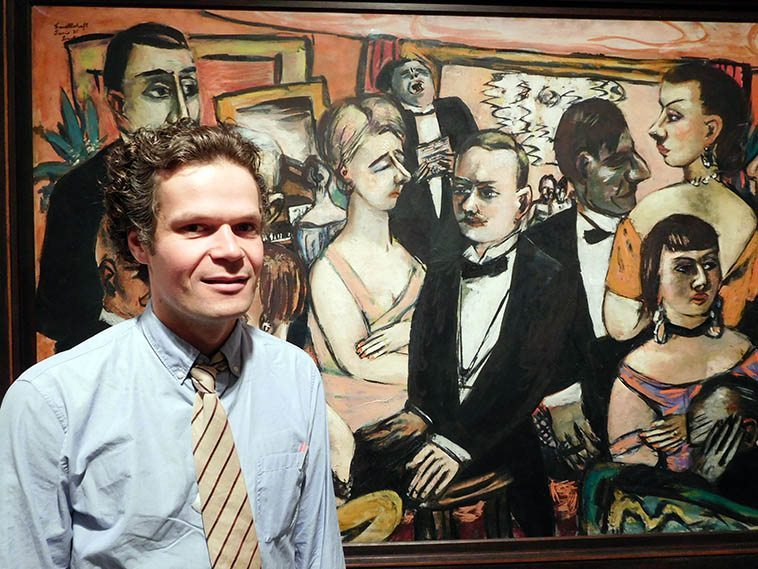 I told Nick to stand right in front of the Max Beckmann so it looked like he was part of the dinner party — Nick Lyons at Metropolitan Museum of Art — November 18, 2o16 — photo by Mark Weber 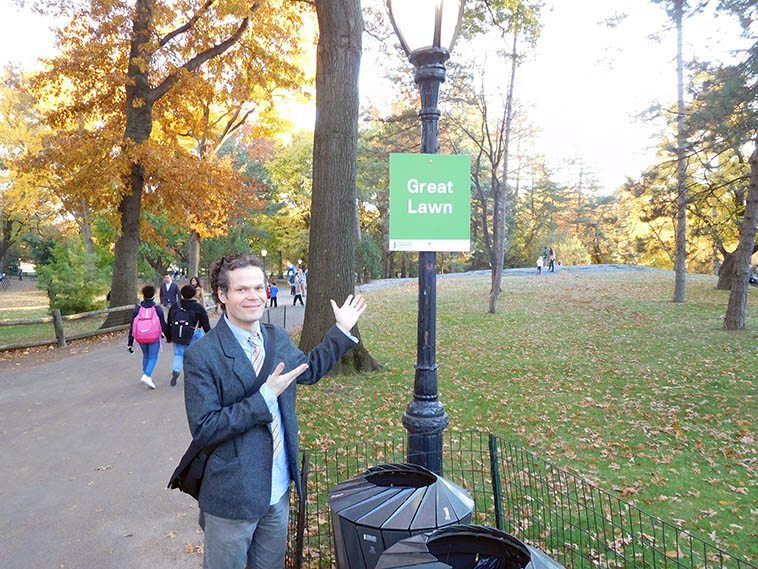 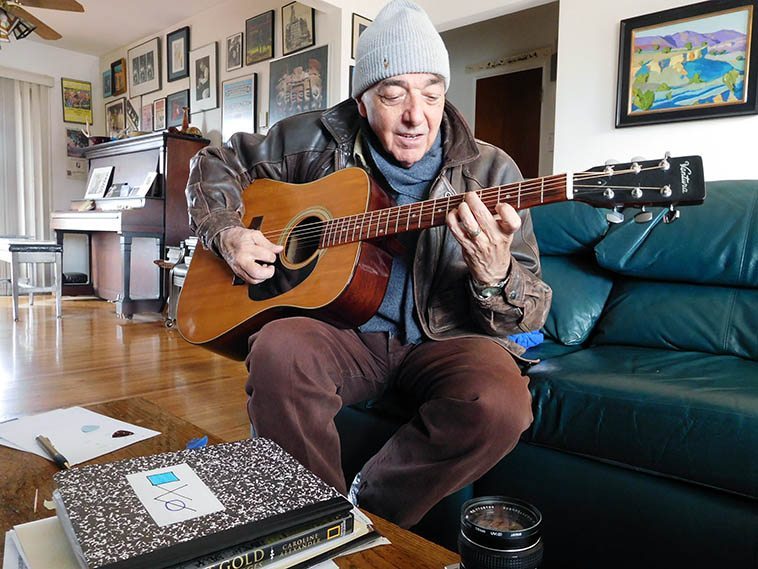 A wino stopped by, no wait, that’s Michael Anthony! He sure played good for a wino — I had been talking with him about his new arrangement on “Polkadots & Moonbeams” so he stopped by 725 to run it down for me complete with commentary, ie. ” . . . inner voices . . . . contrary movement . . . . here’s a chord that Howard Roberts showed me . . . . and here’s another key change (he modified it to 4 keys!)” — photo by Mark Weber — December 17, 2o16 — That’s about the most complicated stuff that was ever played on my old guitar 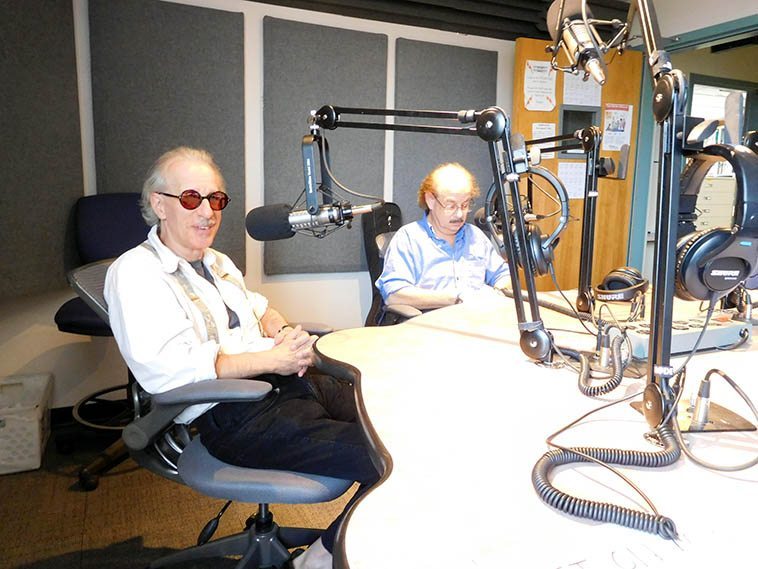 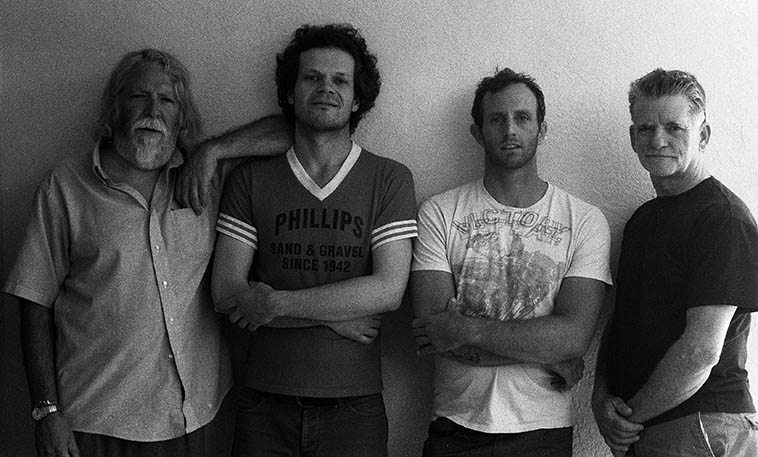 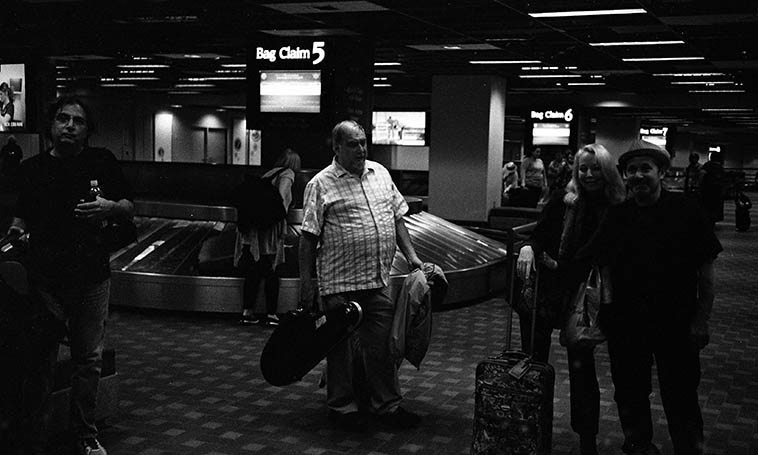 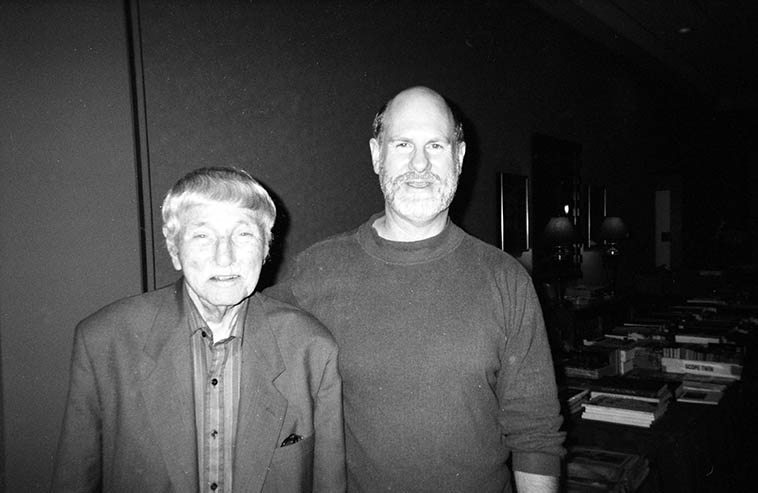 I was going through a Robert Frank phase when I decided to use a $10 plastic disposable drug store camera for this event (I got over it)(remember Robert Frank used to enjoy fooling with anything that exposed film and himself went through a phase where’d he buy 6 or 7 of these little dumpy cameras at a time) — This is guitarist Billy Bauer and jazz scholar Kirk Silsbee at the Springsville Jazz Conference, LAX Four Points Sheridan Hotel — May 28, 2004 — photo by Mark Weber 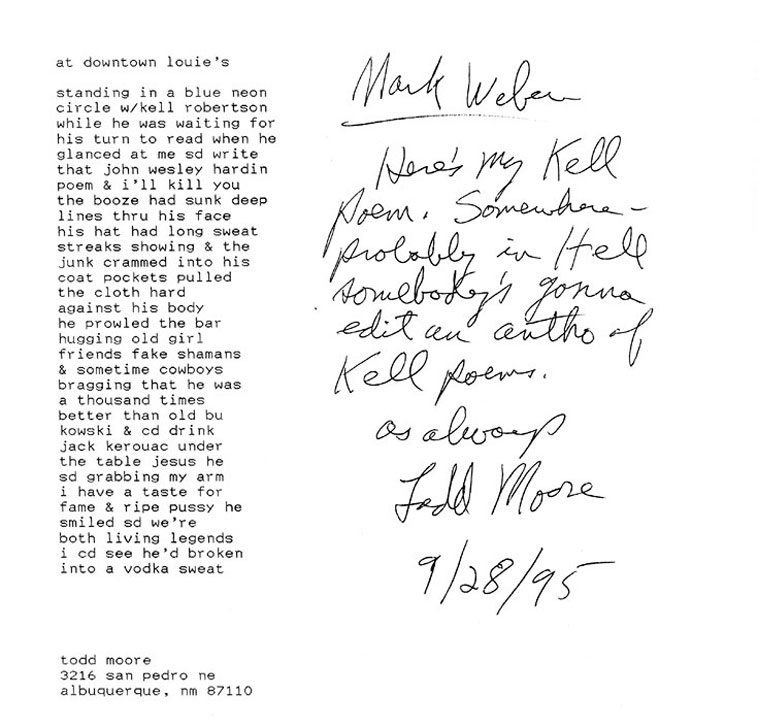 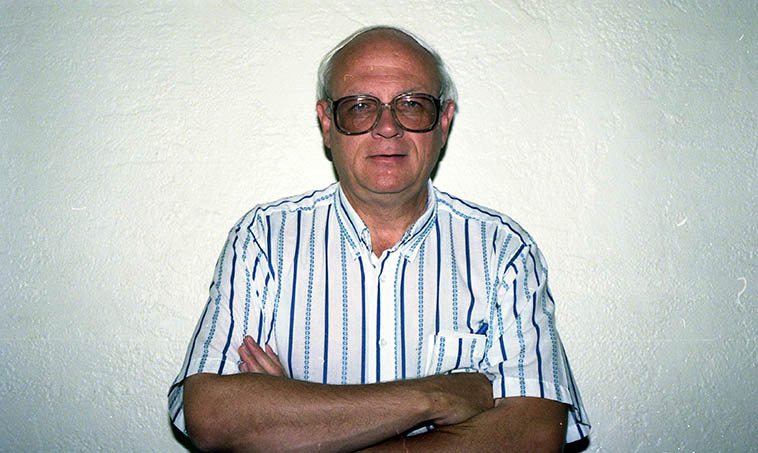 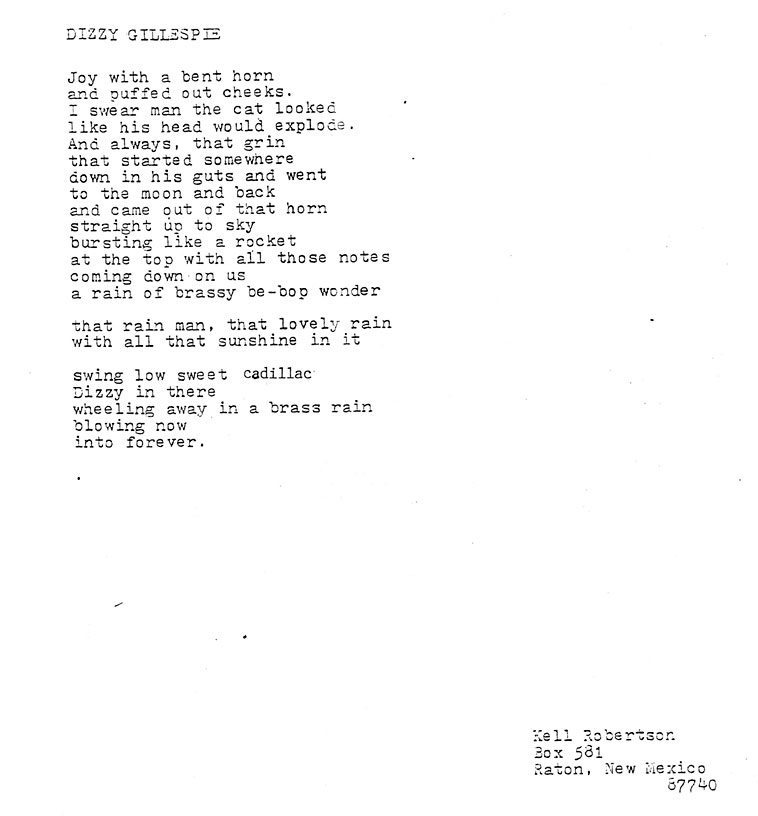 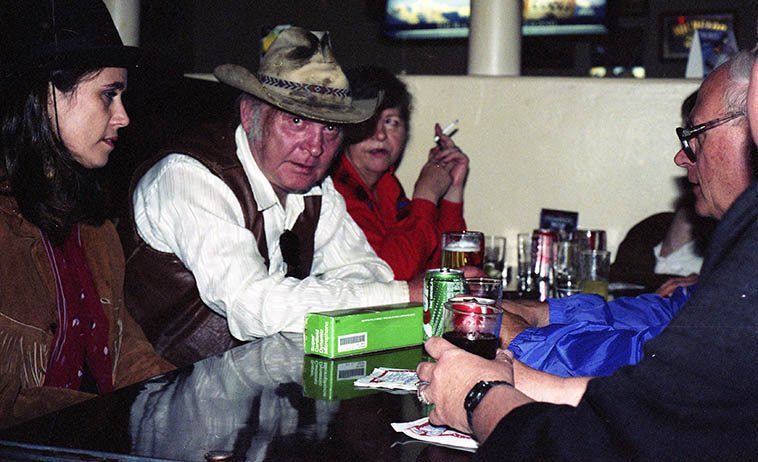 Kell Robertson at the Silver Dollar Saloon in Raton, New Mexico — June 20, 1992 — that’s his wife Betsy with cig, and Mary Evans on his right, and Todd Moore across the table from him — photo by Mark Weber