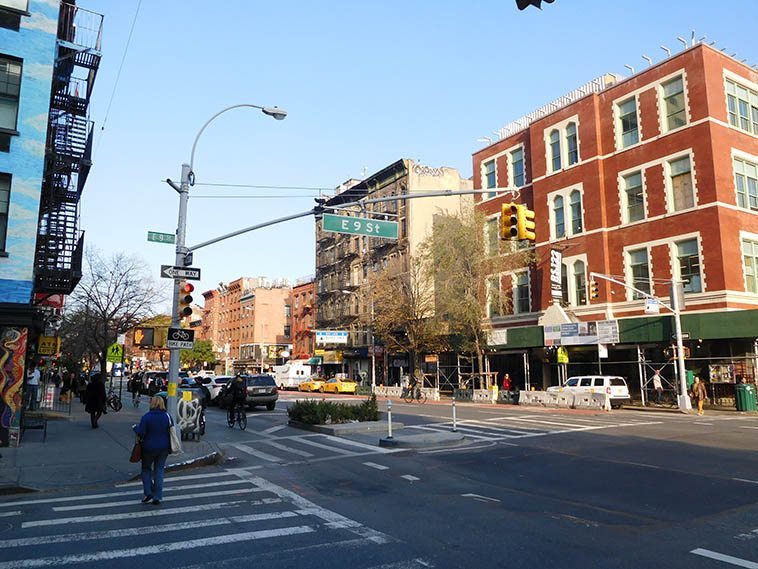 East Ninth Street Drift was Connie Crothers great blues line of the 1990s when she lived on East Ninth just east of 4th Avenue (between 3rd and 4th Avenues in the neighborhood she called Astor Place, right around the corner from Cooper Union) — photo November 16, 2o16 by Mark Weber — I’ve always thought of the title of that blues as descriptive of the foot traffic on that street, the manner in which it lopes along — I wonder if she lived there when she recorded the album CONCERT AT COOPER UNION, January 1984? She could have just walked a block down 4th Avenue to her gig (this is East Ninth at 1st Avenue in the photo)

Poetry is an impulse — I’m pretty sure it’s something you’re born with, for me it’s this perspective that has always been there, and one day the outlet of writing this thing called a poem was introduced to me, in school —- You could say a poem is a recognition of a moment of heighten’d awareness —- Ron Androla likes to say that it’s a reflection of the world, like light reflecting off surfaces: words —- I think that’s a superior explanation — My own current explanation is that you are dealing with a delicate balance between “thinking” with the ancient intuitional prelinguistic mind while toying with words which are problematic in that they are part of the machinery that made homo sapians self-conscious, good or bad —

Even with all that, as curious as it sounds, the thing that poetry aspires to, seems more often gotten to with music. 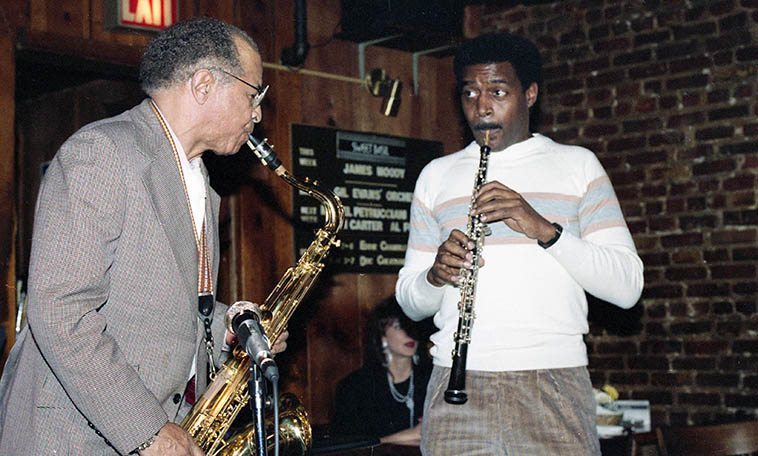 Eddie Chamblee Quartet regular Sunday afternoon gig at Sweet Basil, Greenwich Village NYC — March 7, 1987 — photo by Mark Weber — that’s Walter Lee on oboe sitting in (I don’t know this musician, an internet search reveals he might be Walter Fulford Lee who took a masters in oboe at Peabody Conservatory, 1978, Baltimore) — Eddie Chamblee’s Quartet this day included: Jimmy Lewis(bass), Kali Madi(drums), Ernest Hayes(piano) —- Chamblee was in possession of that big tenor sound from Chicago, where the first half of his career was in full swing, making hit R&B records with Sonny Thompson starting in 1947, as well as sessions with T Bone Walker, Lowell Fulson, Memphis Slim, Jimmy Witherspoon, Big Joe Turner, joining Lionel Hampton 1955-1956, then working with Dinah Washington 1958-1959 (was married to her during this time), then in 1960 relocating permanently to NYC — He was a pure jazzman who was not averse to smoking up a little gutbucket booting, honking, & woofing R&B tenor saxophone for whatever ails you — the 1980s he was with the Harlem Blues & Jazz Band — among others, like Count Basie . . . . . Eddie Chamblee (1920-1999) 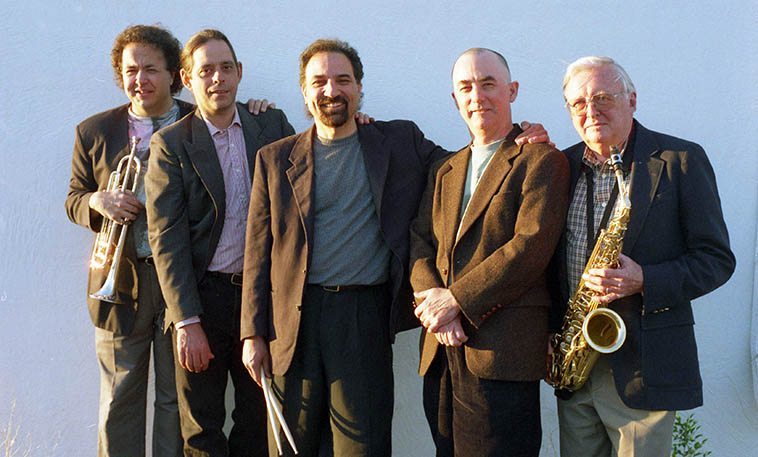 The New Mexico bop band known as Straight Up under the direction of drummer John Trentacosta — L to R: Michael Morreale(trumpet), Bob Fox(piano), JT, David Parlato(bass), Arlen Asher(woodwinds) — April 17, 2000 — photo by Mark Weber — John grew up in Staten Island and moved to Santa Fe in 1992 and regularly brings his friend from back home Michael Morreale out for some of that New York sound 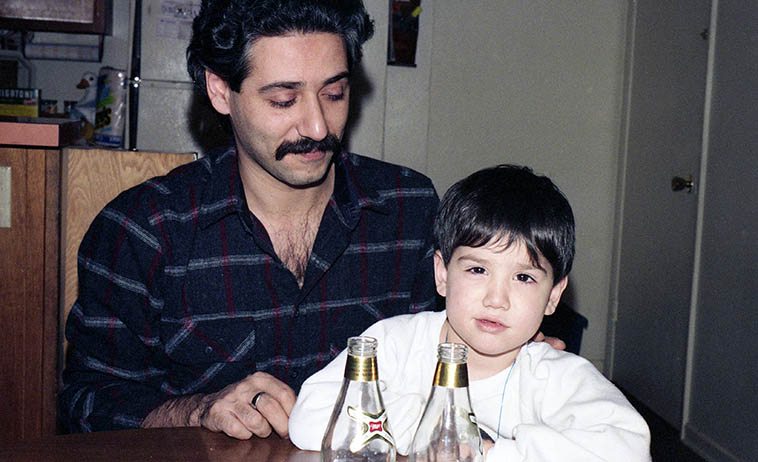 One of America’s great poets: Ron Androla at home in Erie, PA, with son Doug — January 24, 1989 — We were en route back to Cleveland from Buffalo where Janet had some medico thing to attend and we stopped in to say Hi and have dinner (spaghetti) — photo by Mark Weber 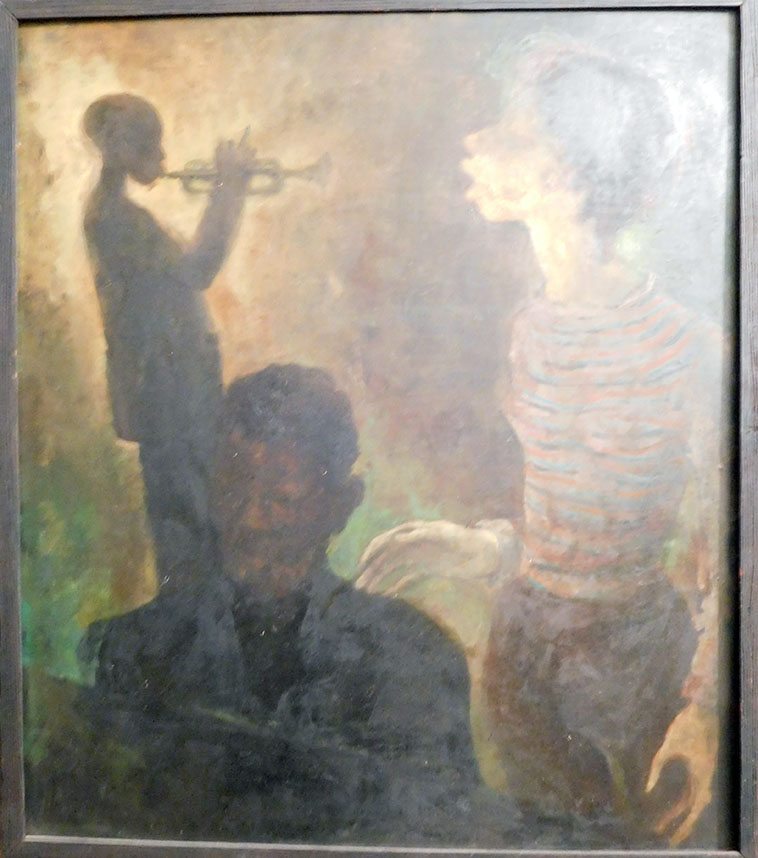 This painting hangs in Sheila Jordan’s dining area of her apartment in Chelsea, NYC — It dates from early 60s and depicts Sheila w/ Duke Jordan and Miles —- the painting is by her friend Virginia Cox who was a friend in Detroit and came to NYC at the same time (1952) see Shiela’s bio page 25 — (Sheila spent her formative bebop years in Detroit and first met Bird there) — photo by Mark Weber — November 18, 2o16 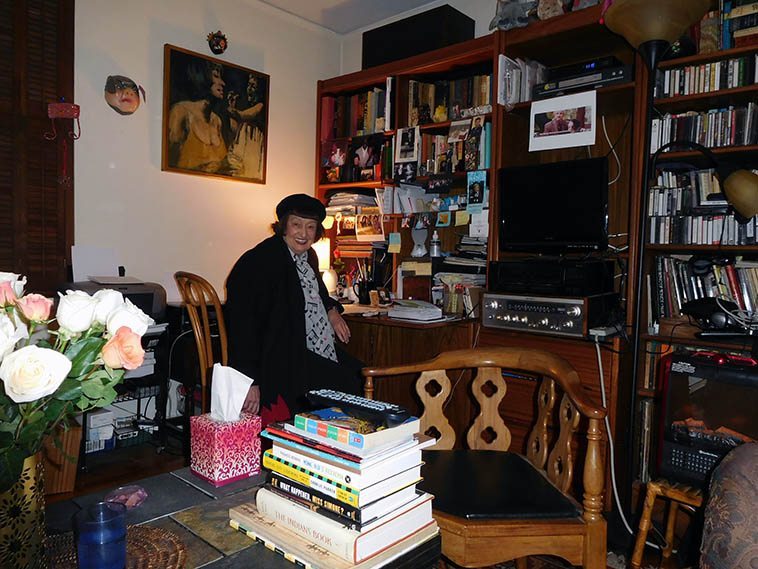 Sheila Jordan at her desk in Chelsea on 18th Street near 8th Avenue on her birthday November 18, 2o16 — I was there to take her to brunch (she had tomato soup and a grilled cheese & tomato sandwich and decaf) at our favorite spot, The Dish around the corner from her place — photo by Mark Weber — She was making hair appointments and talking with her agent and I asked “Sheila, can I photo you at your desk?” And she wonderfully said: “Oh yeh!” she is the pure messenger of what jazz is and spontaneous all at the same time — I said, “I’m beginning to be a pest with this new digital camera, it’s so easy,” and she said “Well, there’s lot’s to take pictures of!” There sure is. 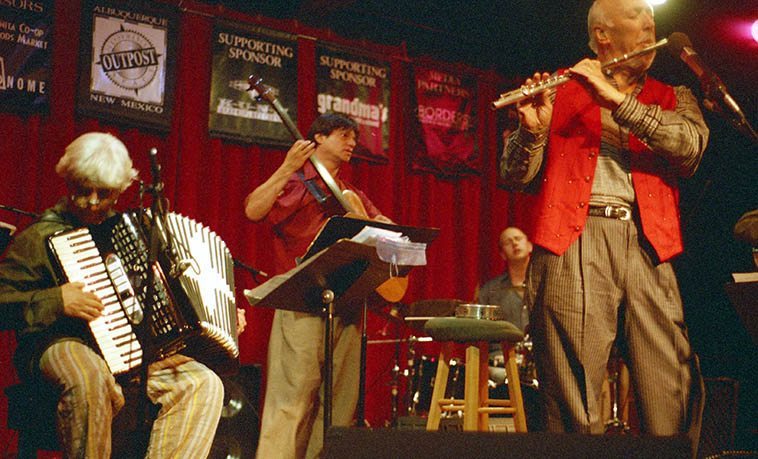 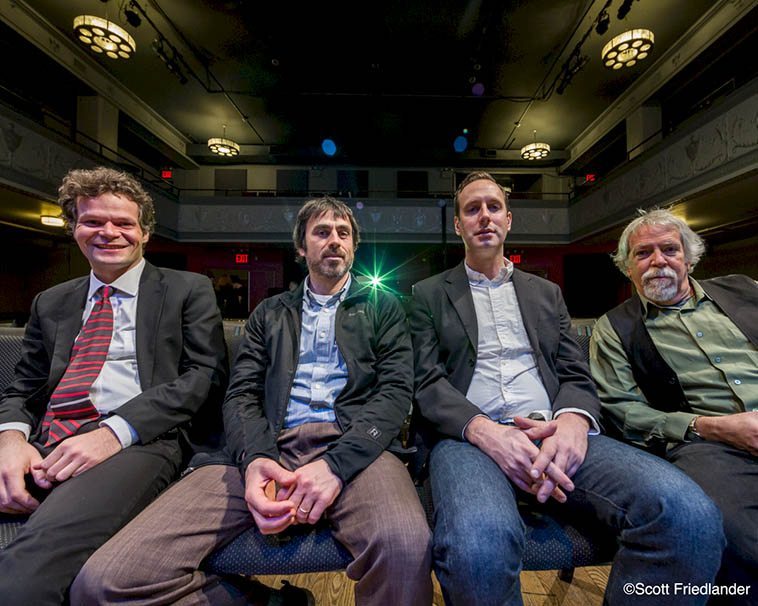 Nick Lyons, Lorenzo Sanguedolce, Adam Caine, and Mark Weber: (Love & Music: A Celebration of Connie Crothers) 11-13-16 Roulette. From the opening notes of Charley Krachy’s solo tenor lament into “How Deep is the Ocean” to Patricia Nicholson Parker twirling w/ a string trio somewhere in the middle, to Cheryl Richards’ last plaintive notes five hours later with “A Sailboat in the Moonlight” the memorial concert for Connie Crothers was as one whole song together celebrating the Real, which was Connie. But even as she has left these shores, she planted a big seed. In this photo by Scott Friedlander I’m sitting with a few of her champions before the show at Roulette, Brooklyn, each of these guys are off the map great musicians, certainly artists, futurists: Nick Lyons, Lorenzo Sanguedolce, Adam Caine, MW. For 147 more photos from the Love & Music concert shot by master photographer Scott Friedlander, go here: https://flic.kr/s/aHskNK3AYY 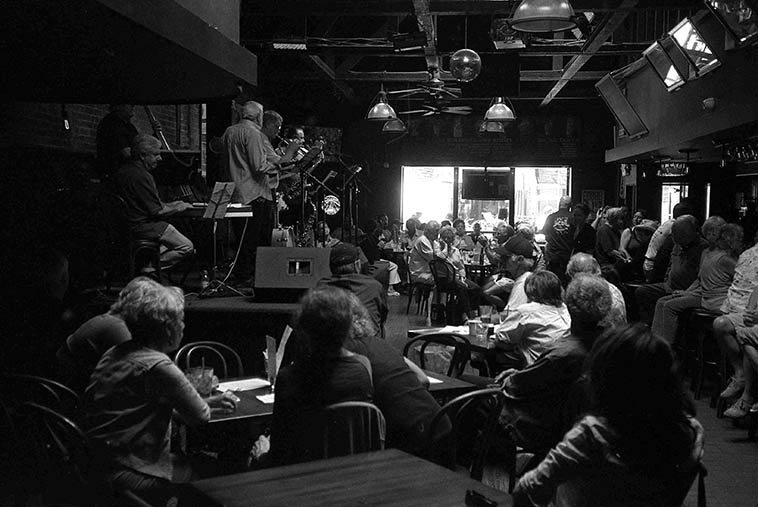 The Lighthouse in Hermosa Beach, California, still cooking — Lanny Morgan Sextet on a Sunday: Lanny (alto), Chris Connor(b—subbing for Chuck Berghofer ), Tom Ranier(p), Steve Schaeffer(d), Bob Summers(trpt), Doug Webb(tenor) — June 25, 2o11 — photo by Mark Weber — We caught up with Chris Connor recently at our Outpost here in Albuquerque on the Joshua Breakstone Cello Quartet (10nov2o16) — Lanny’s sextet is fleet and incisive and straight to the heart of bop, we play a lot of Lanny on the Thursday jazz show 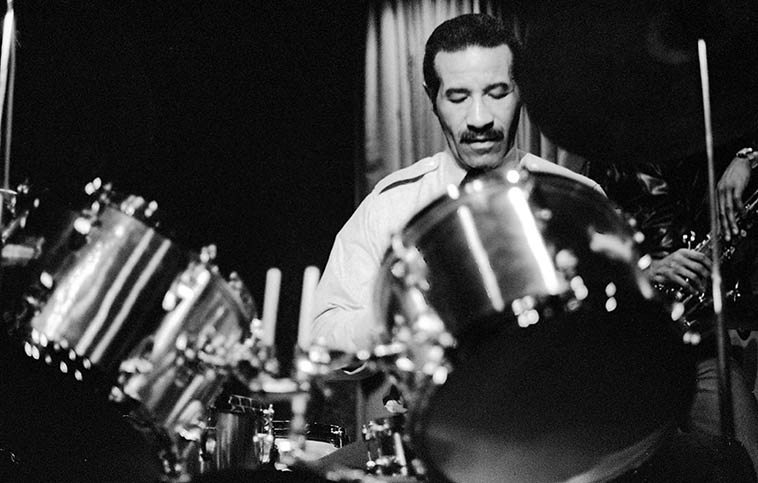 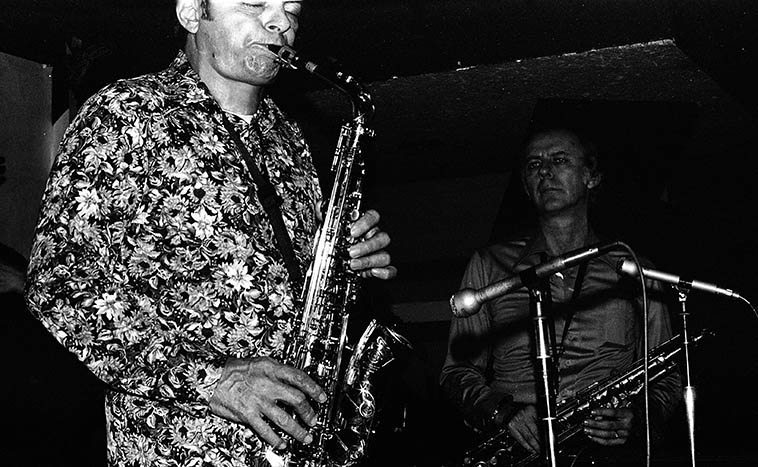 Art Pepper & Warne Marsh at Donte’s — January 26, 1977 in quintet formation with Monty Budwig, Nick Ceroli, Lou Levy — photo by Mark Weber ———- Laurie has just now released a Donte’s meeting of Warne & Art in 1974, something she found in Jack Goodwin’s collection I would guess, I can’t wait to hear it . . . . It’s Volume 9 of Unreleased Art (Widow’s Choice) 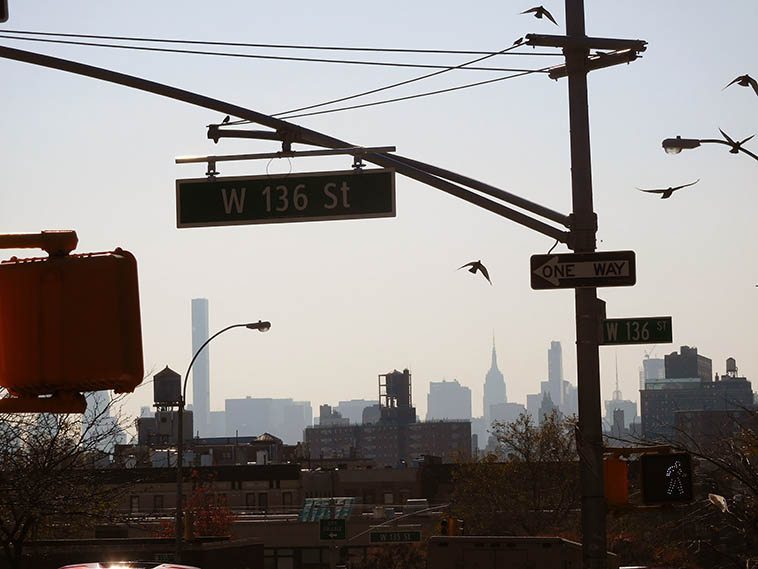 Looking south down Amsterdam Avenue to Empire State Building and the new World Trade Center — Wednesday 11:23am on November 16, 2o16 — photo by Mark Weber out for a stroll in Harlem