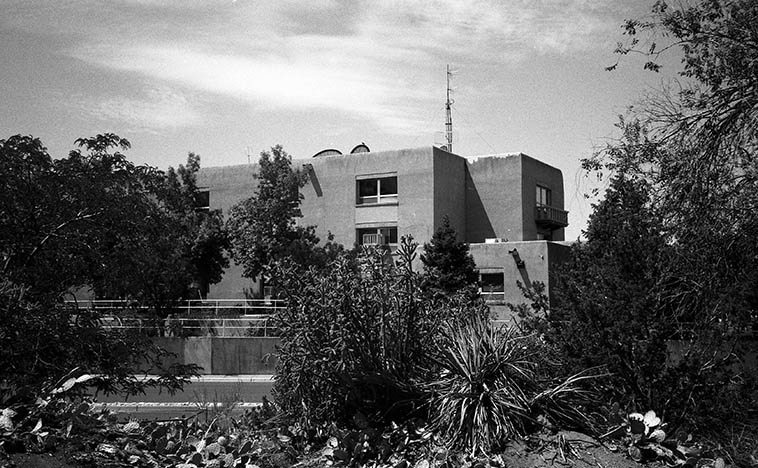 This photo is sort of confusing as it’s from a vantage we don’t usually see Onate Hall, corner of Campus (old arroyo) and Girard, Albuquerque, on the north-east corner of University of New Mexico campus — for some reason I was standing in the bramble across the street when I snapped this one — the entire top floor is KUNM (3rd floor) and the window with the balcony that’s the actual control room that we broadcast out of — photo by Mark Weber — July 21, 2o11

ALWAYS SMILE, WE DON’T KNOW WHERE ANY OF THIS IS GOING

We used to be more ethereal beings . . .
. . . I suppose I tend to idealize how humans would communicate without words, as if we’d be more magical and loving, but how could we have enacted our inventiveness without words? Humanity has gone so far down the path of words that we now think with them —-

I wonder if architects think with words? painters shouldn’t, dancers do not, and the best poets play with fire, thinking without words but using them and their sound/image to write their poems, musicians certainly think with words but not when they’re playing, that would be a hindrance, news journalists are infected with words, and politicians say whatever will get them voted with words, I call myself a writer but I’m suspicious of how words have completely taken over our brains, like a virus, they’ve over-ran what used to be there in our prelinguistic days, I love words but wish they would not dominate our thoughts . . . .

On the other hand, I wake up this morning to a rainy day in Albuquerque and remember that 60s song “In the early morning rain, with a dollar in my hand, and an aching in my heart and my pockets full of sand, I’m a long way from home and I miss my loved one so . . .” 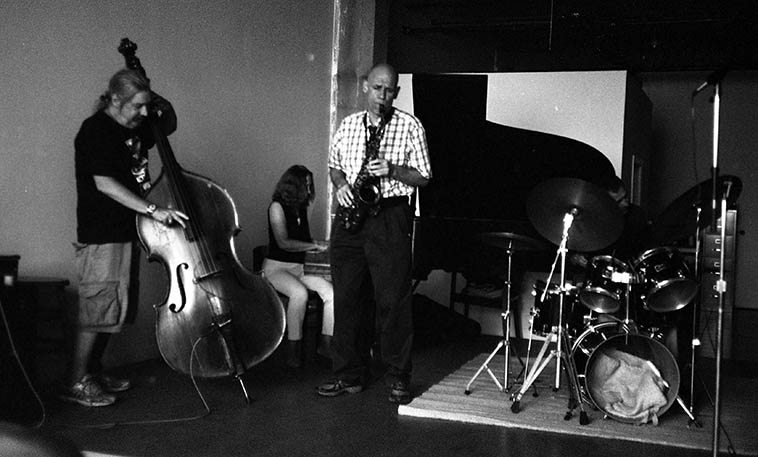 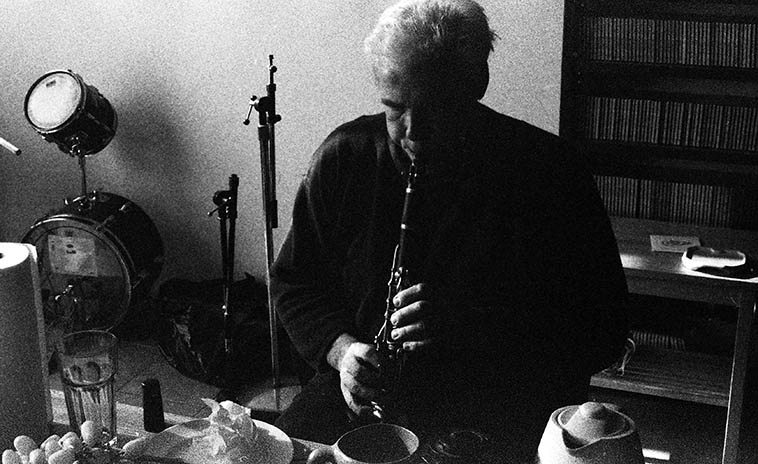 Bill Payne at Connie’s studio in Williamsburg — December 5, 2004 — This is the first time I ever heard Bill, was this day when Connie invited him to a recording session we were having — photo by Mark Weber — and of course he knocked me out, one of the great masters of clarinet 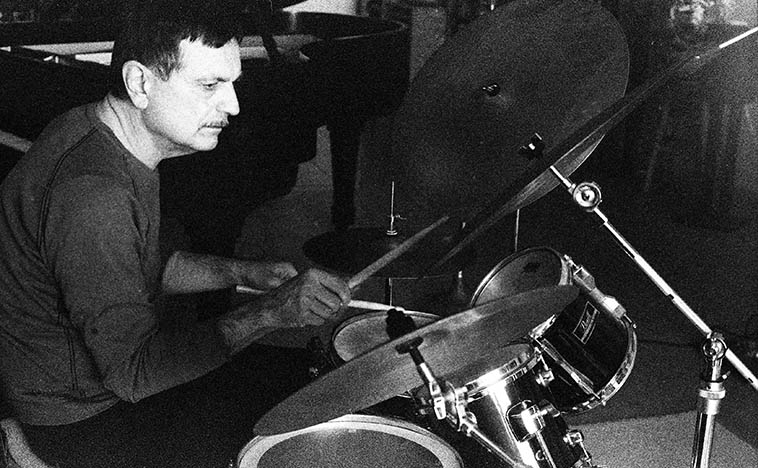 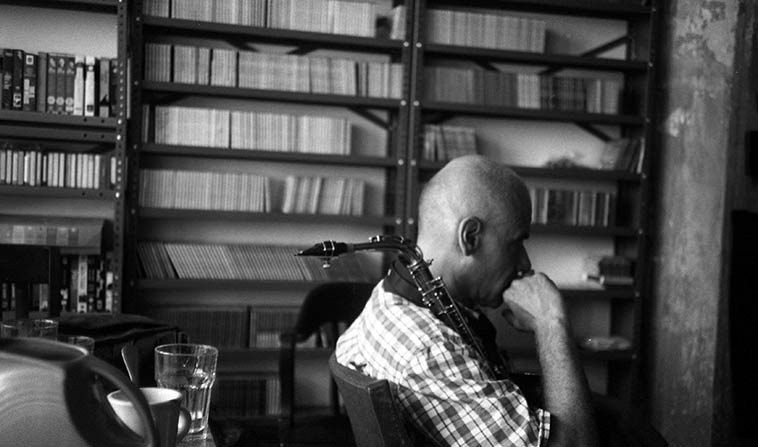 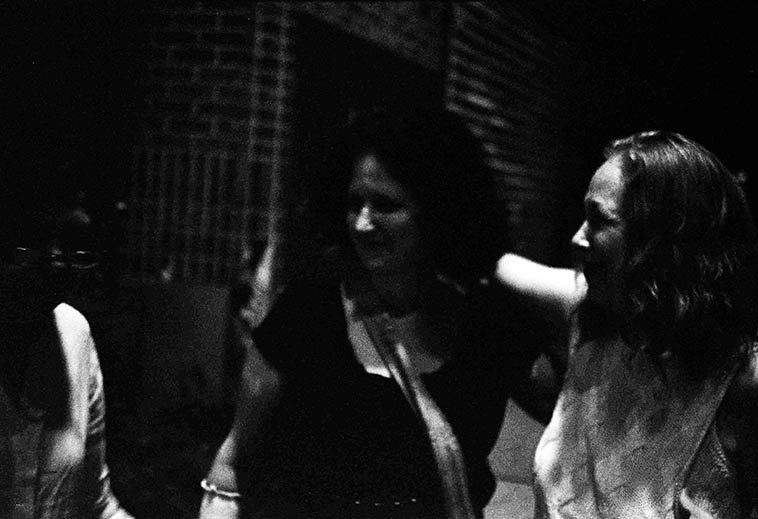 I love this shot, it shows Connie’s affection for Virg and Carol — it was almost midnight and we were on a train platform in Park Slope, Brooklyn, waiting for a train — Virg Dzurinko, Carol Liebowitz, Connie Crothers — photo by Mark Weber 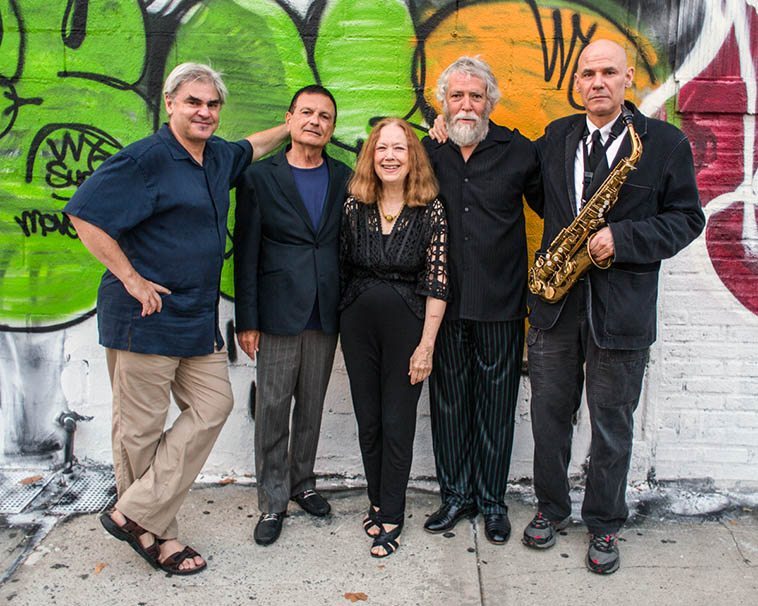 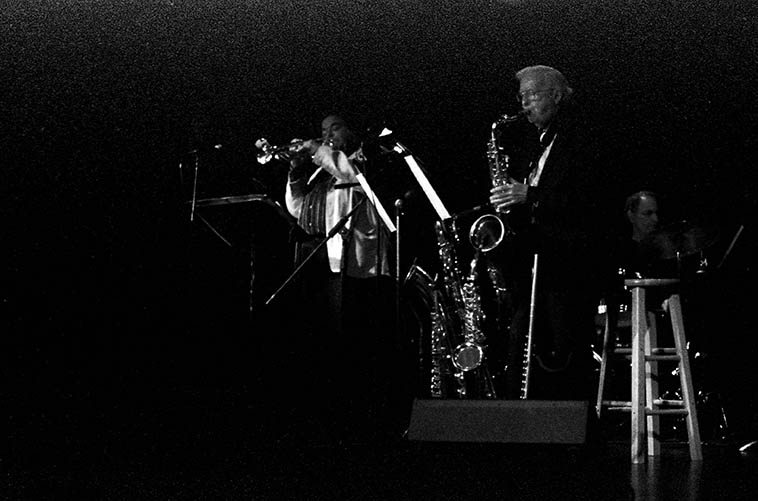 The New Mexico outfit known as Straight Up, under the direction of drummer John Trentacosta, with his Staten Island running buddy Michael Morreale, trumpet, on his annual visit, and Arlen Asher, woodwinds — I was using some outdated old damn film and these photos are toast — July 18, 2o13 — photo by Mark Weber — We’ll dip into Michael’s new cd today LOVE & INFLUENCE (PepJack Records) his debut 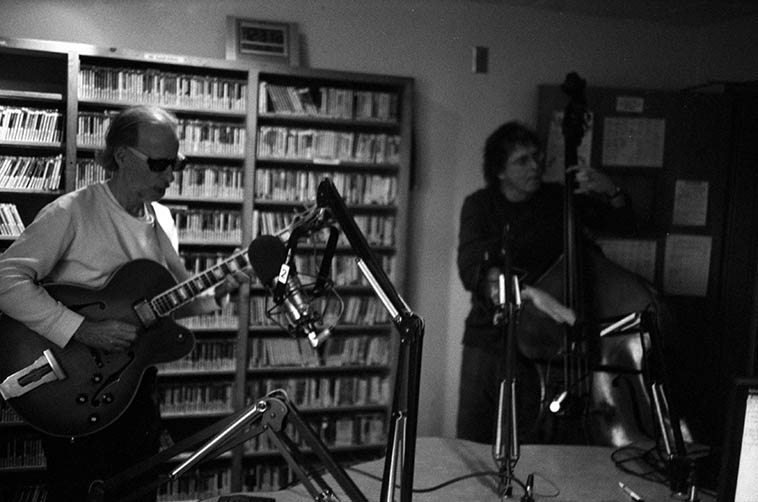 Joshua Breakstone and Earl Sauls in KUNM control room broadcasting live on the Thursday Jazz Show —- December 17, 2009 ——– AND I am pleased beyond measure that Joshua will be making a return engagement to the Thursday Jazz Show and bringing along his cellist Mike Richmond for some live in-studio music — Joshua is right out of the Lester Young ethic of lyric melodic narrative story telling improvisation that ranges as far as it can stretch: my kind of music 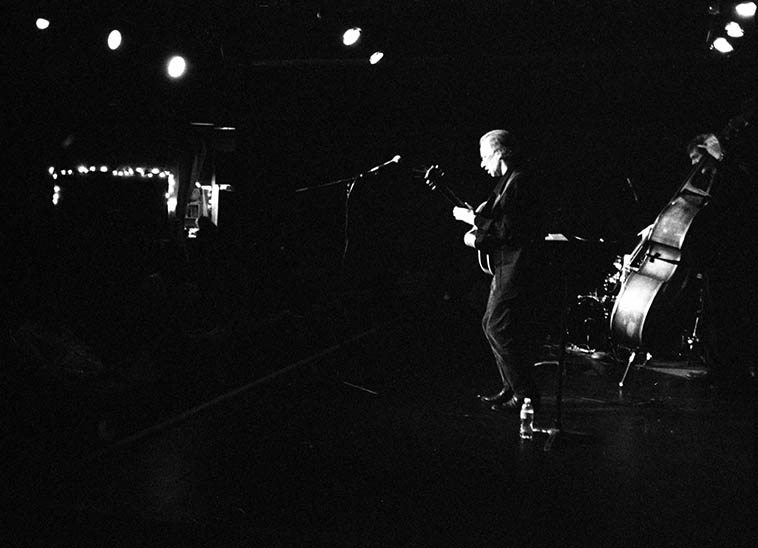 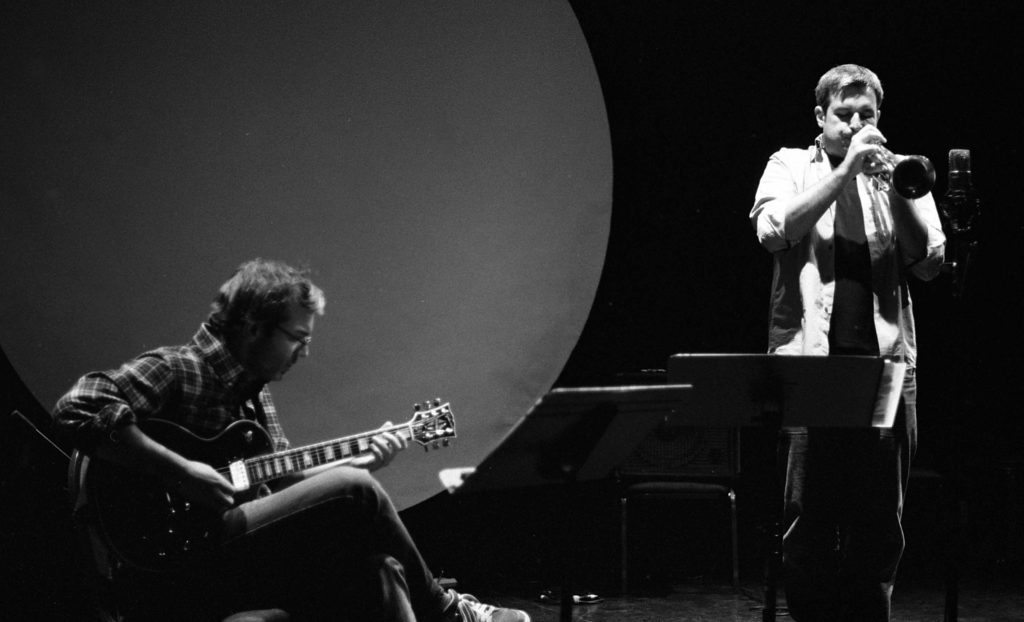 The duo that calls themselves TinBag: Mike Baggetta (guitar) and Kris Tiner (trumpet) who make the most exquisite music, composed and beyond — November 10, 2o12 at UNM Arts Lab, Albuquerque — photo by Mark Weber 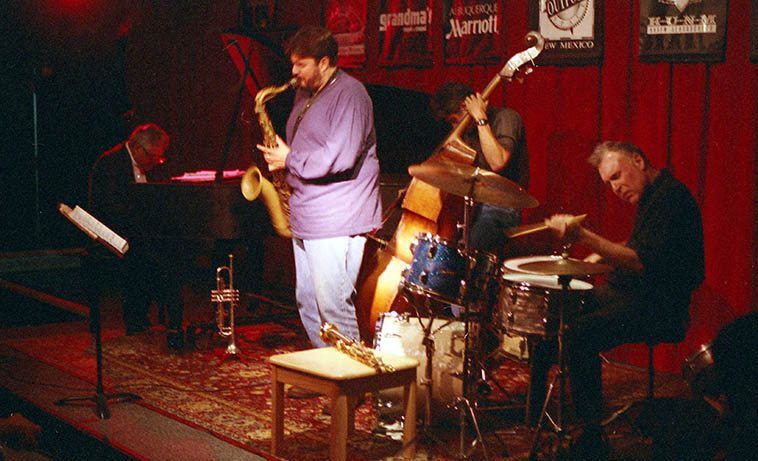 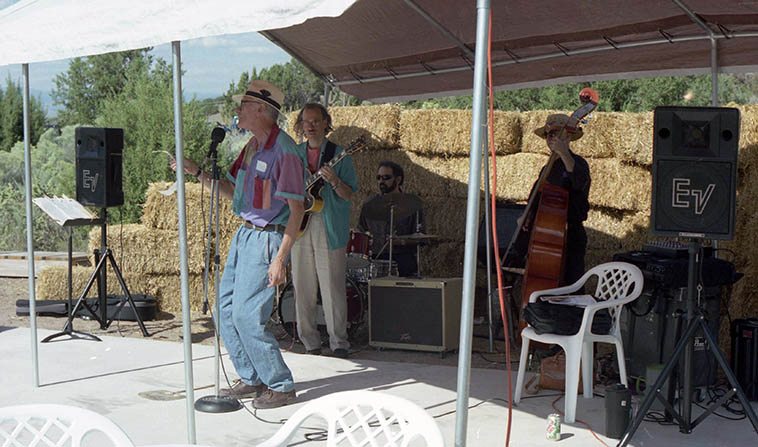 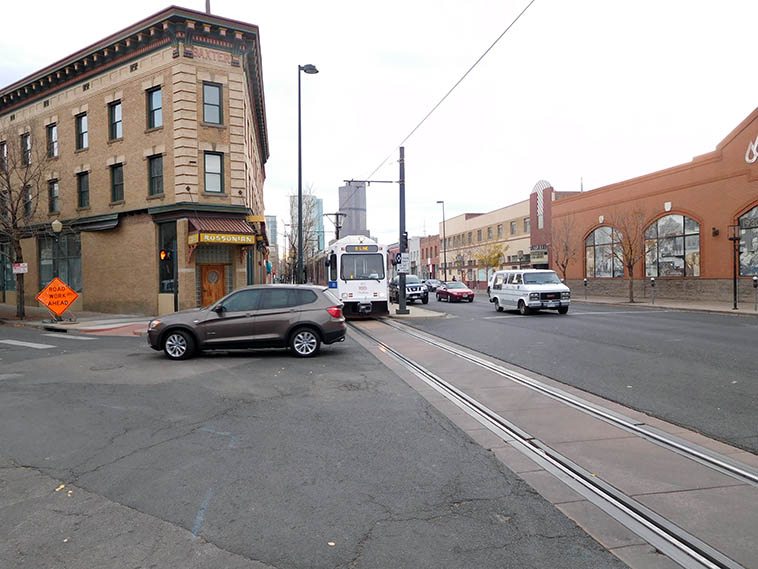 The Rossonian on Welton Street at 27th in Five Points, Denver — October 30, 2o16 — on a short visit up to Colorado I asked my old friend Janet Feder to drive me over to Five Points to see some of these old 1950s jazz haunts — The Rossonian Hotel would host after-hours jam sessions where everybody from Billie, Miles, Sarah, Nat King Cole, Basie, Dizzy would stay — The corner of 27th and Welton is mentioned in Jack Kerouac’s novel ON THE ROAD, where he and Neal Cassidy would frequent — photo by Mark Weber — Five Points was known as “The Harlem of the West”