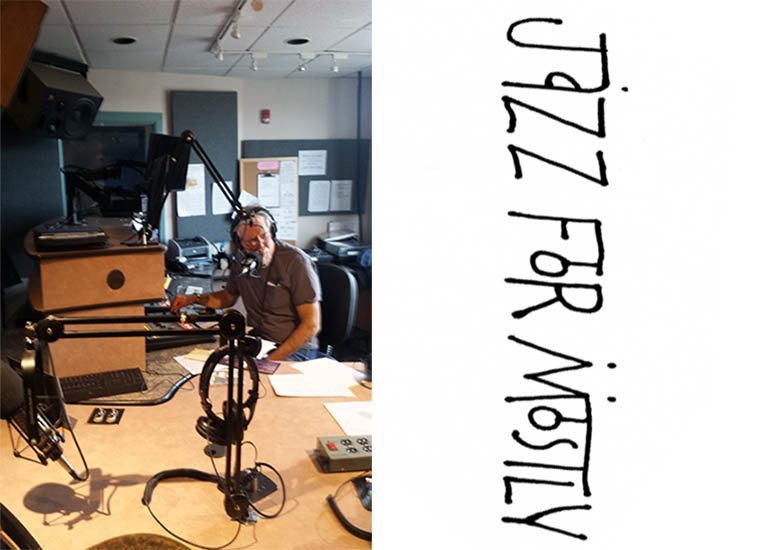 MW on the board at KUNM interviewing Nick Lyons — December 29, 2o16 — photo by Cal Haines

Someday I’m going to lose my nerve and not be able to do radio anymore. It’s an extremely audacious thing to represent this music, as well as reveal oneself. This thought just floated past my brain as I was getting out the frying pad to get some eggs going. In another hour I’d be on the radio with the trio of Cal and Nick and Colin, all good friends, but still, I felt that old trepidation that used to assail me in my teens and twenties. (It’s long gone now but not unfamiliar territory.)

Inasmuch as I believe in that proposed dichotomy of introvert/extrovert I could probably be heaped into the former, but as we know, defining oneself can be limiting: One then follows the script.

As we stand back, history shows how much we are influenced by our immediate circumstances. I’ve always thought of the 20th century as being a very industrious, active, innovative, and consequential time: a lot happened. But it has ever been so, always, every century has its fast-paced changes and developments.

Music has a way of retaining traditions while also reflecting new things. I was thinking how one generation of jazzman reared during the swing-to-bop era, who had their sensibilities order’d during that revolutionary time all of a sudden had the avant garde “New Thing” artists like Cecil Taylor, Ornette, and Sun Ra, in the late 50s to deal with. Followed by Albert Ayler, and also Coltrane and Rollins leanings in that direction in the early 60s. I’ve watched this gulf in sensibilities my whole life.

And forget the Dixielanders, they were swept under the rug if you were a modernist of any stripe (the term “modernist” came to the fore with Charlie Parker and gained even more currency with Brubeck). (And for whatever mysterious reasons, Lennie Tristano was ignored, but that’s another story . . . .)

It’s important to be of your time, to reflect who you are within society and reflect the times back at itself. Generally, this takes place of its own, we are all caught up in the tide, even innovators are part of the flow, it’s all one river. 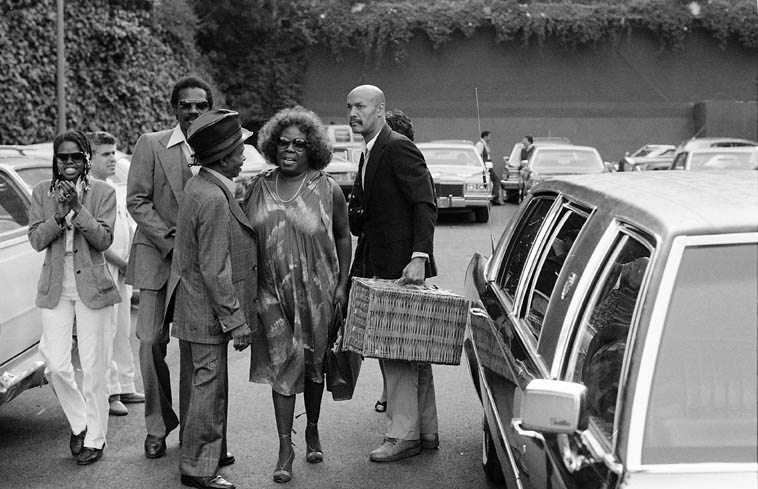 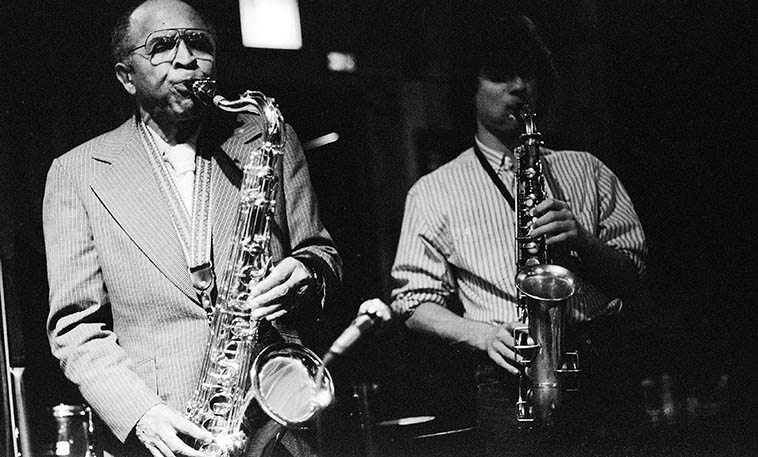 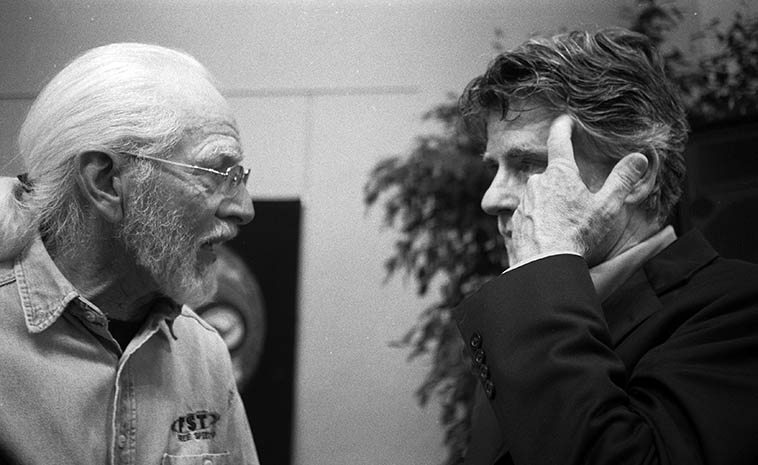 Jack Manno & Cal Haines — April 10, 2o11 Santa Fe, New Mexico — photo by Mark Weber — Jack got away from us October 3, 2o15 — he was an arranger and choir director and jazz man — He was the leader of the choir and arranger on Duke Pearson’s immortal “Cristo Redentor” (1969 album HOW INSENSITIVE) — The radio shows he did with me on vocal jazz were comprehensive, I should rebroadcast them . . . . 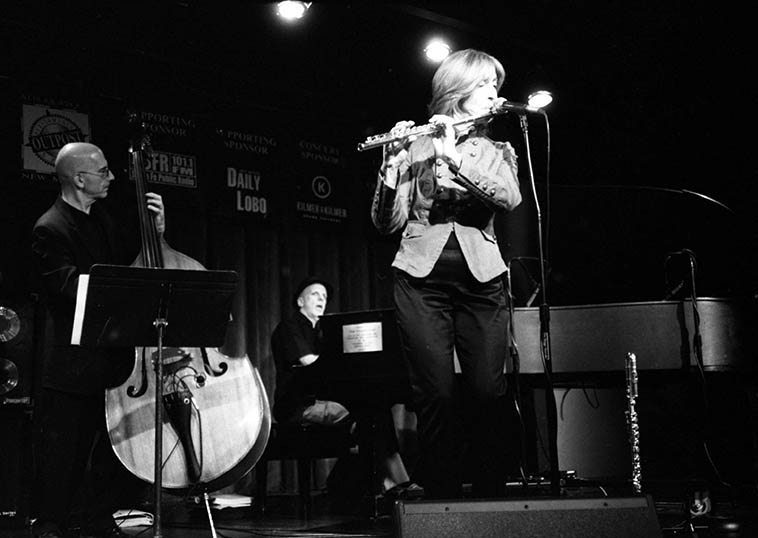 Ali Ryerson was born to the flute and the flute was lucky she came along — w/ Michael Olivola (bass) and Brian Bennett (piano) at Outpost Performance Space in Albuquerque — October 7, 2o10 — photo by Mark Weber 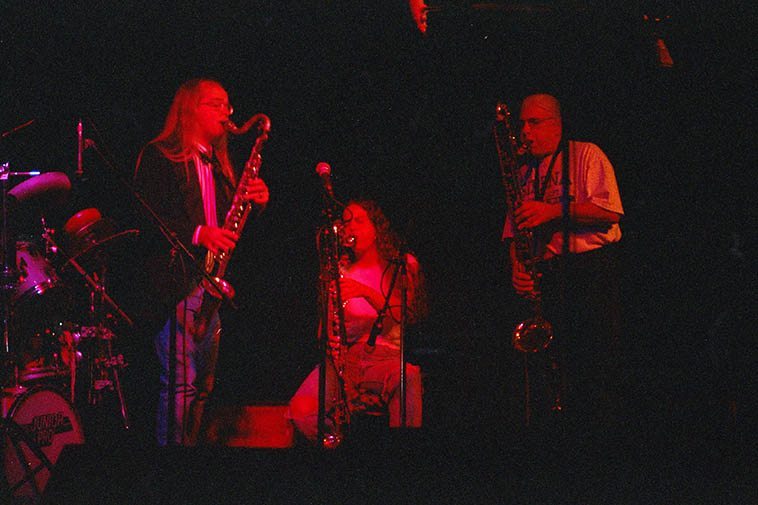 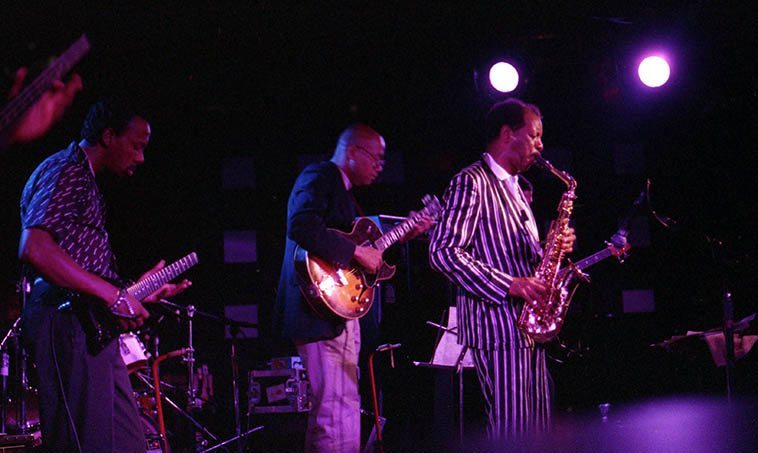 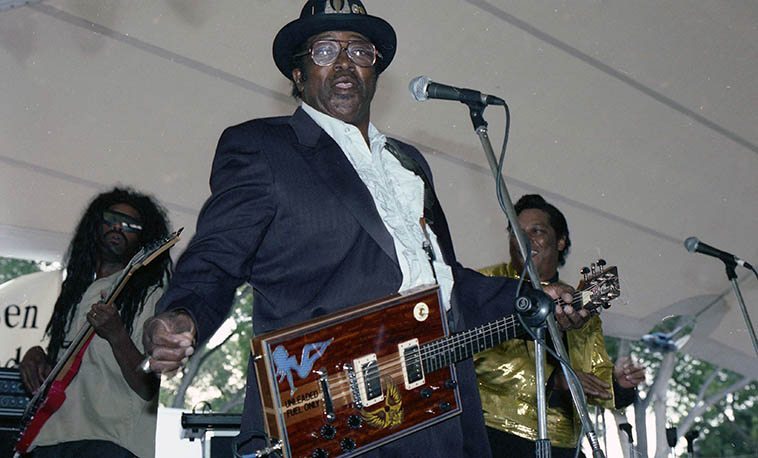 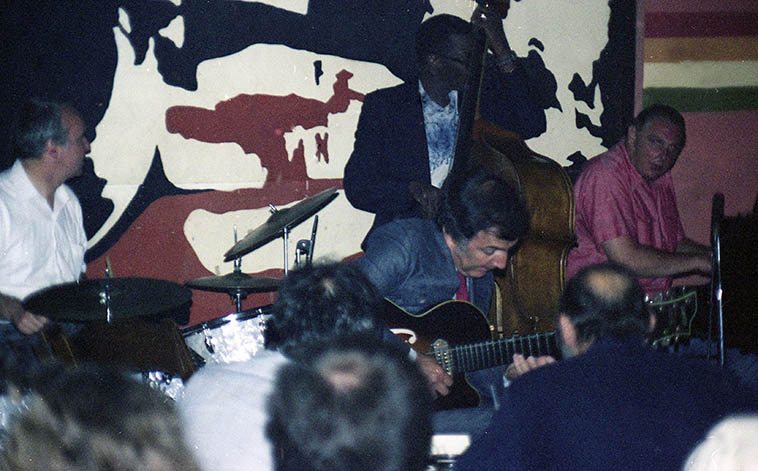 Zoot Sims back home in Los Angeles for a minute before flying this band over to Japan — This quintet played 4 nights June 12-15, 1977 at Donte’s in North Hollywood —– Jake Hanna, drums; Bucky Pizzarelli, guitar; Major Holley, bass; Dave McKenna, piano; and Zoot not in this shot — photo by Mark Weber 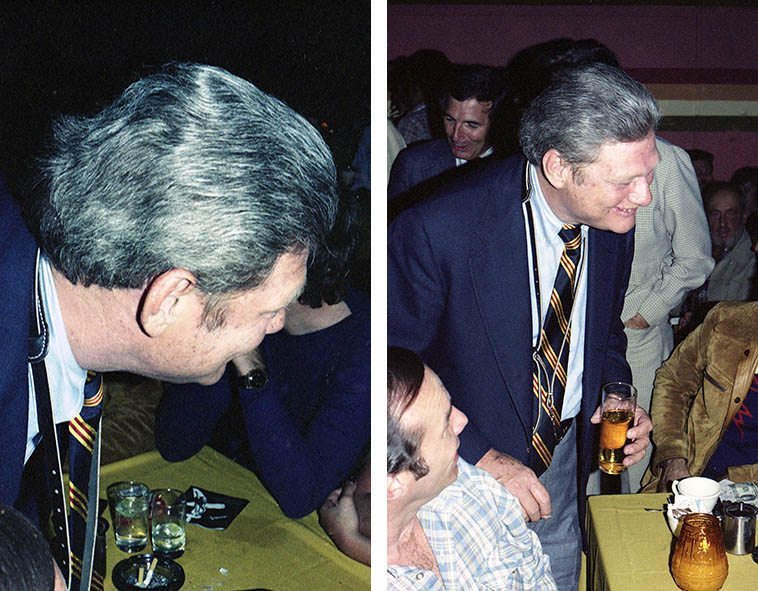 Zoot was perfectly happy to visit among the tables between sets — Donte’s, June 1977 — That’s Bucky behind him and Ross Tompkins seated —- This was an unusually crowded night for Donte’s —- I’ll have to ask John Breckow why our gang wasn’t sitting at our usual spot at the bar this night, I believe this was our table — photo by Mark Weber 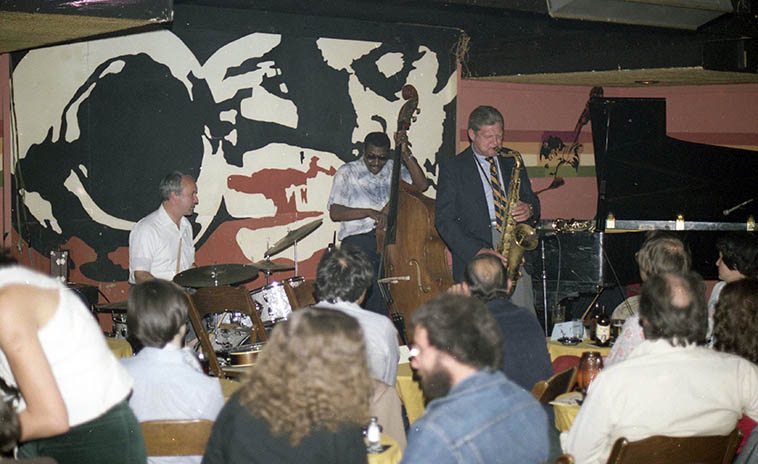 Hal McKusick told me the story when trumpeter Nick Travis missed a session out of exhaustion in the early 60s (late 50s?) and Zoot called him and Nick barely awake answers the telephone (he was an in-demand session musician these years) Zoot says, “Hey, Nick, this is Zoot, where are you?” and Nick said, “Zoot who?” —- photo by Mark Weber — Zoot Who at Donte’s, June 1977 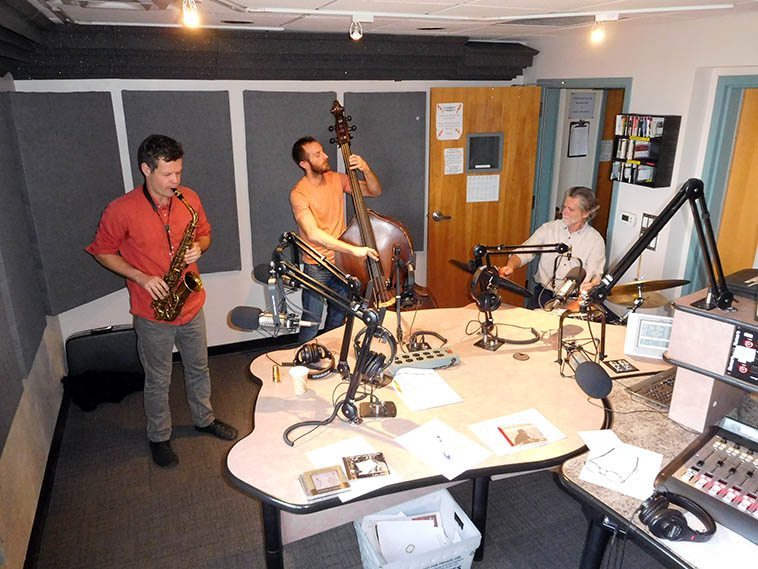 The Nick Lyons New Mexico Trio — December 29, 2o16 — digital snapshot by Mark Weber — KUNM control room broadcasting Live over the New Mexico airwaves, these guys played their tails off, fleet, and lyrical, pulsing with rhythm — A return engagement as Nick has family in New Mexico and visits every year or so, the first time this trio played on the Thursday jazz show was July 31, 2008 —– The December 29 show will be on the KUNM archive for 2 weeks, check it out — Colin Deuble (bass), Cal Haines (drums), Nick Lyons (alto) 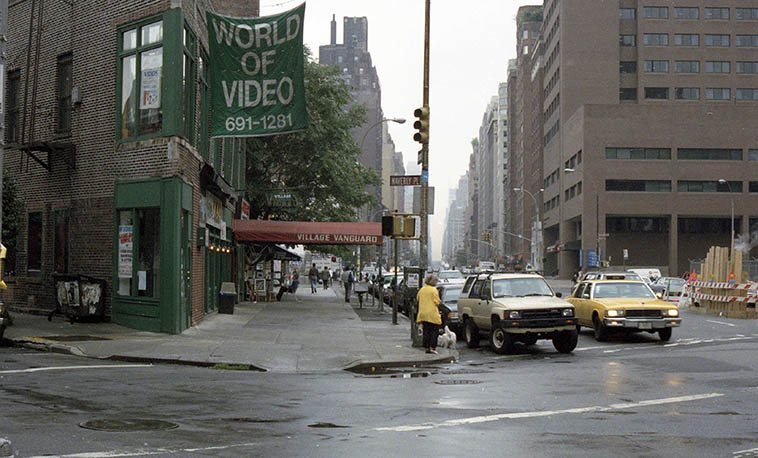